Milanoir is a top down shooter set in Milan, Italy in the 70’s. It has some charming art direction, a good soundtrack, and a unique setting, but it falls terribly short on content and gameplay design choices.

Milanoir is a top-down shooter set in the city of Milan in the ’70s. You will impersonate Piero, a skilled and brutal hitman working for the Milanese criminal underworld, possibly the ‘Ndrangheta, who proceeds to carry out missions following his Boss’ orders. Murders, extortion and violence are Piero’s daily bread, and he stops at nothing to complete his assignments. Without spoiling much of the storyline, let’s just say you will mainly face rival Mafia gangs at various famous environments from’70s Milan, such as the Navigli, leaving a trail of corpses, bullet casings, and destruction in your wake. This is not a game that aims at realism, but instead more of a Tarantino-esque style where a one-man-army killing machine stands against all odds in impossibly overwhelming situations, and comes out of them victorious. With appreciable art style, unique settings, and a good soundtrack, this game was on the right way to becoming a hit of the genre, until it derailed because of its gameplay which does not meet expectations at all, as you will read further.

General Gameplay
Levels in Milanoir are separated in Chapters, each divided consequently in a series of zones, mostly filled with enemies to kill before proceeding to the next one. This is a very classic approach to top-down shooters, and there is nothing wrong with it. One of the first issues I have to talk about is how the game handles progression. You MUST finish a Chapter from start to end if you want the game to save your progress. Even if there are numerous checkpoints inside a level, these will not be considered as “save points” and so if you, for whatever reason, exit to the main menu or close the game, you will have to restart the whole Chapter from the beginning. This was common in the past due to technical limitations, but as of 2018 it is not acceptable to have a game that does not save progress dynamically, tied to such an archaic, impractical save system. There is literally no valid reason for a game of this type to implement such a system.

Character progression is somewhat missing in Milanoir, with no upgrades to the character or statistics. Really, there is nothing at all. It is not really a bad thing for this genre, but usually the lack of these factors is compensated by an abundance of varied weapons, upgrades drops, and items in levels. Instead, these are almost absent save for very sporadic Molotov Bombs, Revolver Pistols with six-shots, and an UZI machine-gun given in a specific level. This boils down to always having the same weapon, without variations, upgrades or modifiers, and in the long run it becomes stale. Often I asked myself why you can’t you take weapons from dead enemies and use them until the ammo runs out, that would be a great improvement.

There also are sections in Milanoir with different types of gameplay, such as vehicle-driving sections on road and water, and also stealth sections. While the vehicle sections are mostly fine, the stealth sections are absolutely horrendous as you not have a clue about enemy vision arcs or distance. The cover system that is supposed to hide you is not working properly and you WILL be spotted even when hidden from a distance of one hundred meters. Other times enemies will just pass half an inch from you and just be oblivious to your presence. These stealth sections come off as VERY frustrating minigames and frankly should just have been avoided based on how they turned out. 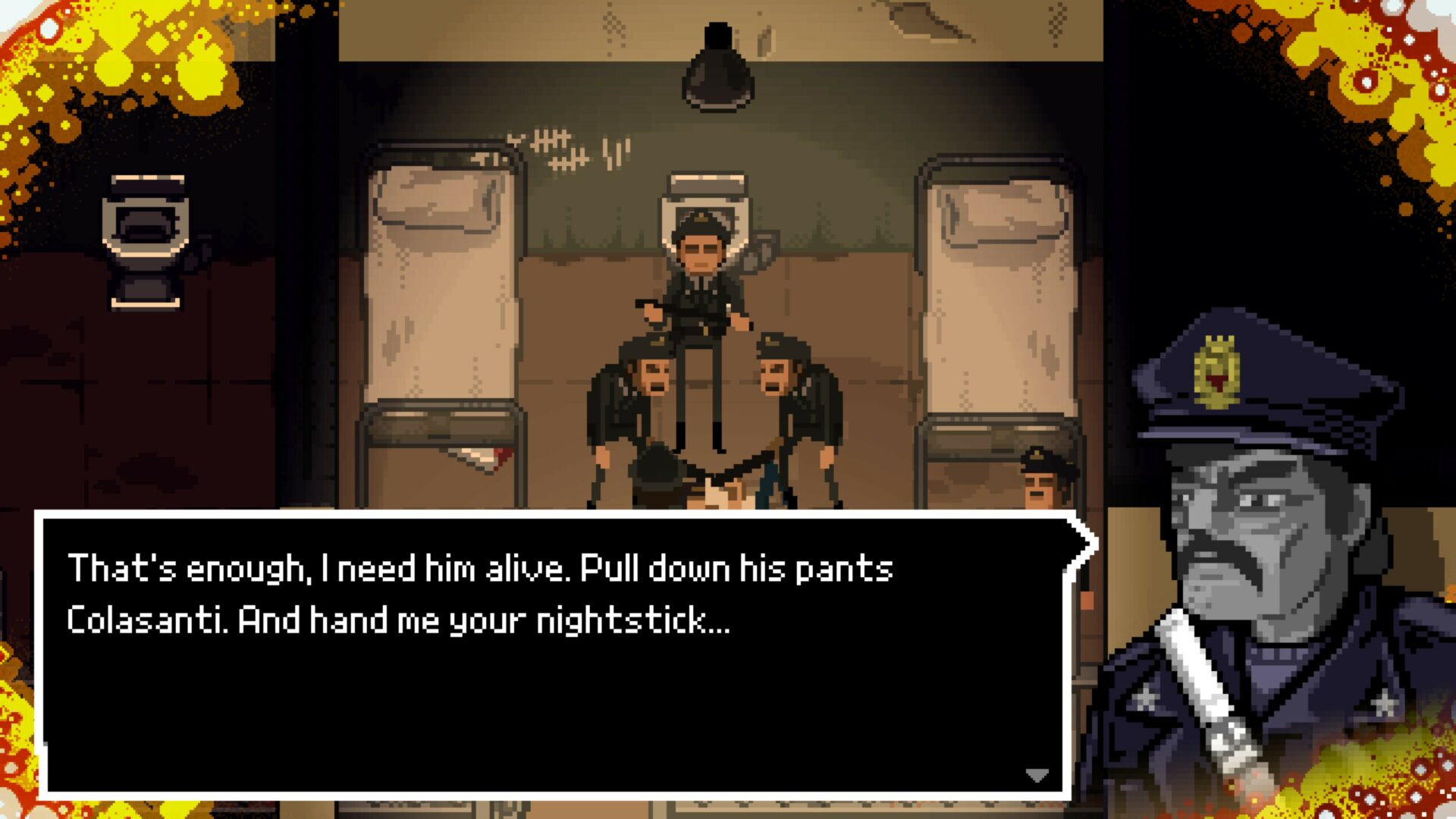 Combat System
Combat in Milanoir is the of the type you’d expect from a classic top-down shooter: aim with the mouse, left click to shoot, space plus direction to dodge, R to reload, Q for throwing molotovs when available. Simple and straightforward.

The Cover system is part of the combat mechanics, as crouching by holding Space near crates, stalls or cars will put you in cover to avoid enemy fire. This system does not work properly all the time, as sometimes you WILL get hit by enemy fire even when evidently behind cover, this implies an inaccurate hitbox calculation. Luckily this game does not have 1-hit death, as health is regenerating over time when not getting damaged, but this is not displayed anywhere. The only clue of how close to death you are are the screen borders fading out as if burned more and more. A health bar would DEFINITELY be better than this type of effect in a game like this.

Enemies will be presented in a handful of variants: standard enemies with a pistol, molotov throwers, heavy shotgunners requiring several hits to be killed, and more advanced versions using better shotguns and even machineguns later in the game. Notice that there is no headshot mechanic, hits to any body part will be the same, and frankly this is disappointing as accuracy should be rewarded, especially against heavier enemies.

At the end of each chapter there will always be a boss fight involving unique attack patterns and mechanics most of the time. Using road signs to ricochet bullets is another mechanic of this game, and that allows us to perform 1-hit kills on any enemies by simply shooting signs, the bullet will fly to the nearest enemy, killing it instantly. This is a nice little mechanic that is not, however, used at its full potential, for example by adding enemies that are only killed from specific angles.

Content
At two hours into the game, I arrived at 75% of the story, I expect the full game to last no more than 3 hours, and Arena mode provides little more content as it is just a endless survival mode with the same maps of the campaign. For 10 euros (12 dollars), this is not a great level of content.

Balancing
The game balance feels fine in normal sections, however as the game progresses there will be many “clustered” sections, where you will start a zone clustered in a little space with no cover or room to dodge, and high damage enemies all around you. This is particularly true in the subway section of a particular level, where the game outright spawns enemies all over with no room to evade or cover, mostly 1-shotting you in a few moments before having the time to do enough DPS to kill all the enemies. These type of sections are a consequence of poor game design and not very well thought-out enemy spawn points. It is INCREDIBLY frustrating because of how unfair they are.

Challenge
On Hard, enemies will pack a punch and you will have to stay on your toes. 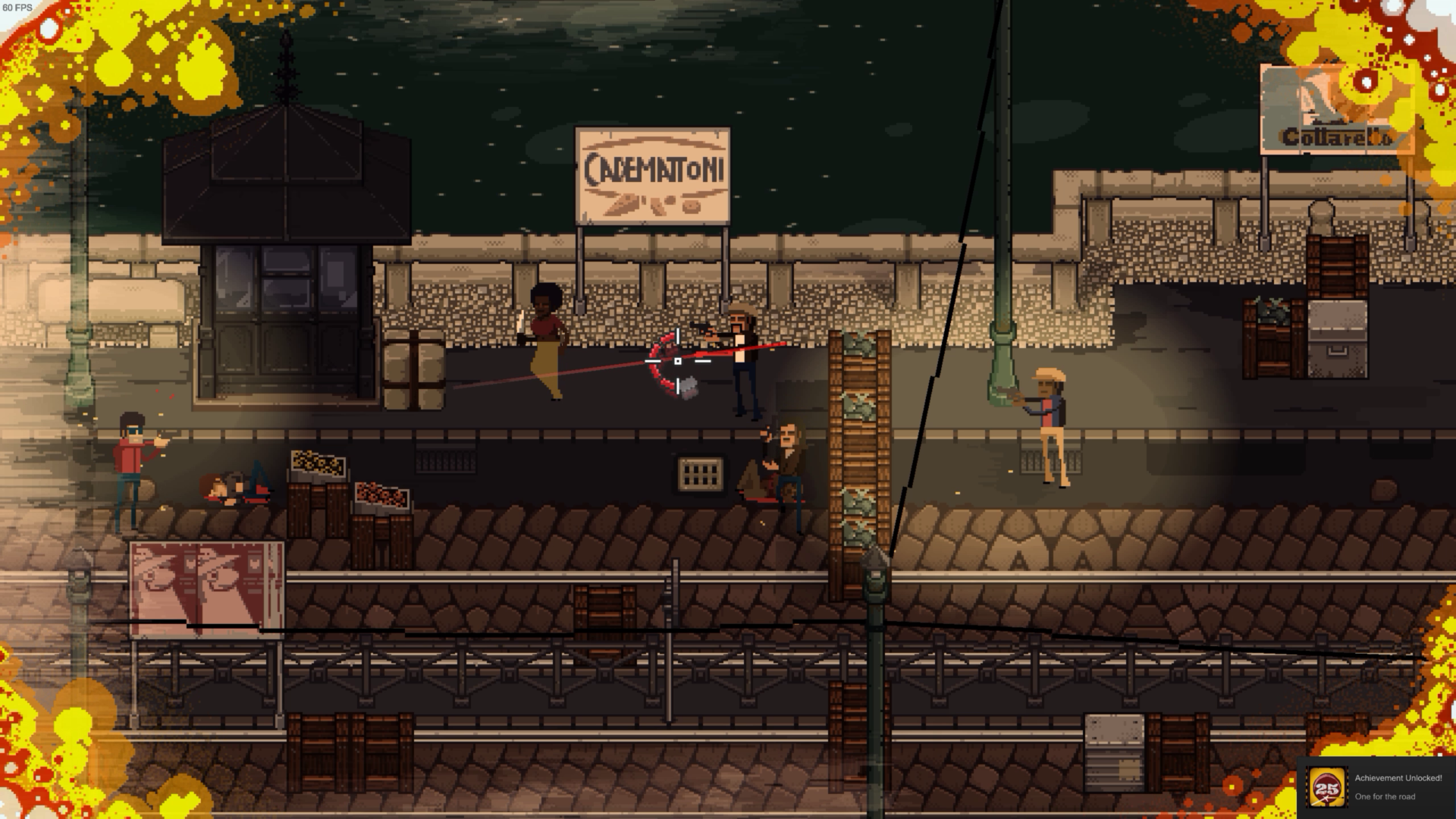 Graphics
The game has a rather well done pixel-art style depicting ’70s Milan pretty well, as an Italian I can say the depiction is well made.

Sound
The soundtrack is very good with decent effects. It is a shame there are no voice-overs in the dialogue as there are in the game trailer, I expected there to be but there isn’t.

AI
Enemy Ai has a simple follow and attack pattern.

Bugs / Issues
The Cover system does not always work properly. It is difficult to aim melee enemies point blank because of how the aiming is done. 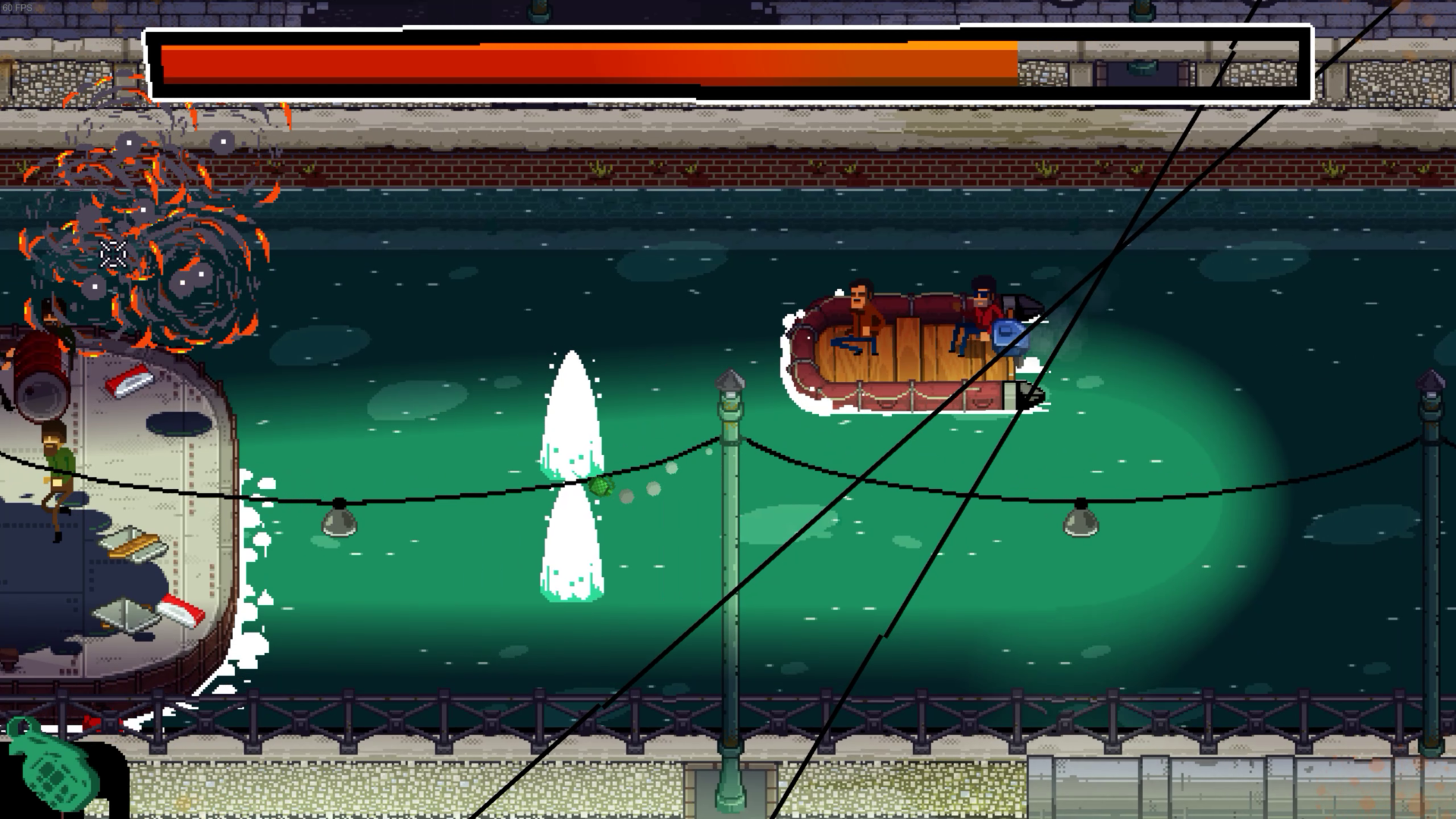 Milanoir is a game with a good setting, decent art, and good sound direction, but it falls very short on content and gameplay. Therefore I cannot recommend it for this price after seeing how little content there actually is, and the several questionable design choices and mistakes in the gameplay.