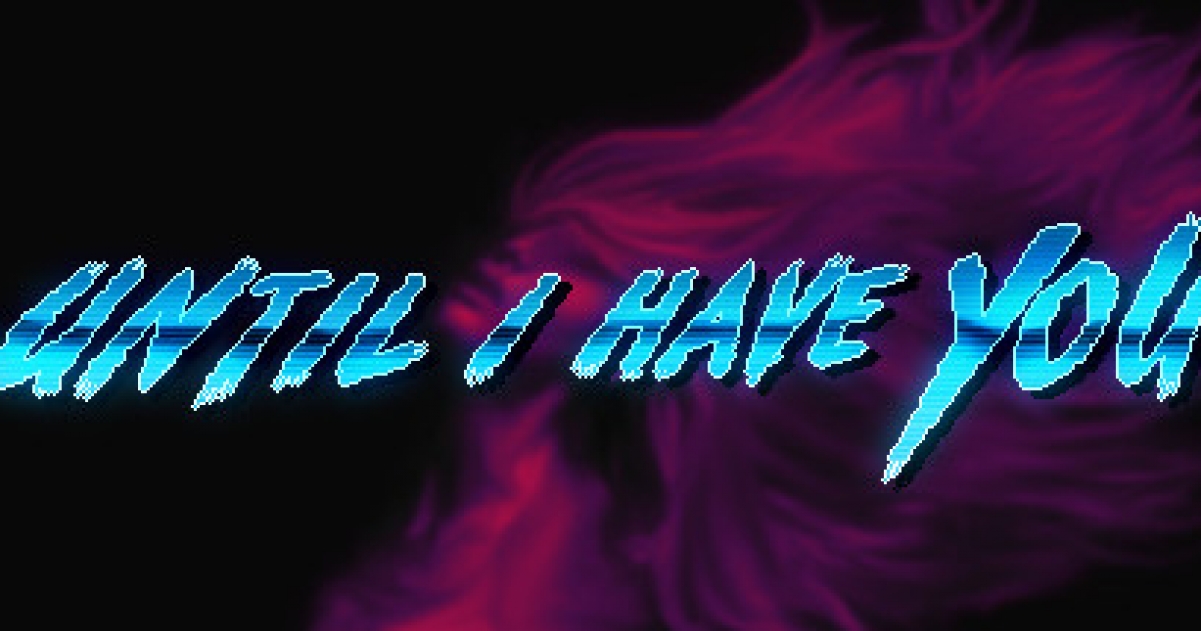 REVIEW: Until I Have You

A cyberpunk nightmare, rich with ideas but flawed in its execution.

Until I Have You tells the tale of a man going on a quest to find his abducted wife, and if he has to kill whoever stands in his way then so be it. Everything is narrated in a very Neo-Noir style, marrying the cyberpunk genre perfectly. Pretty illustrations with contrasting dark and neon colors rendered in pixel-art enhanced by an electro soundtrack create a strong mood, feeling as if this was all just a nightmare.

However, even though the narrator is putting great efforts in his lines, the voice does not entirely fit. Perhaps it should at least have been modified by computer to reflect the mask that the character is wearing. For other characters, sometimes the voice lines are even cut without saying the whole text. The story-telling can also be quite confusing, but since it already feels like a nightmare then it’s fine. What I found good however were the TV news after each mission, giving more background to the characters that have been killed while delivering the information in a manipulative way to reflect the corruption of that cyberpunk world. 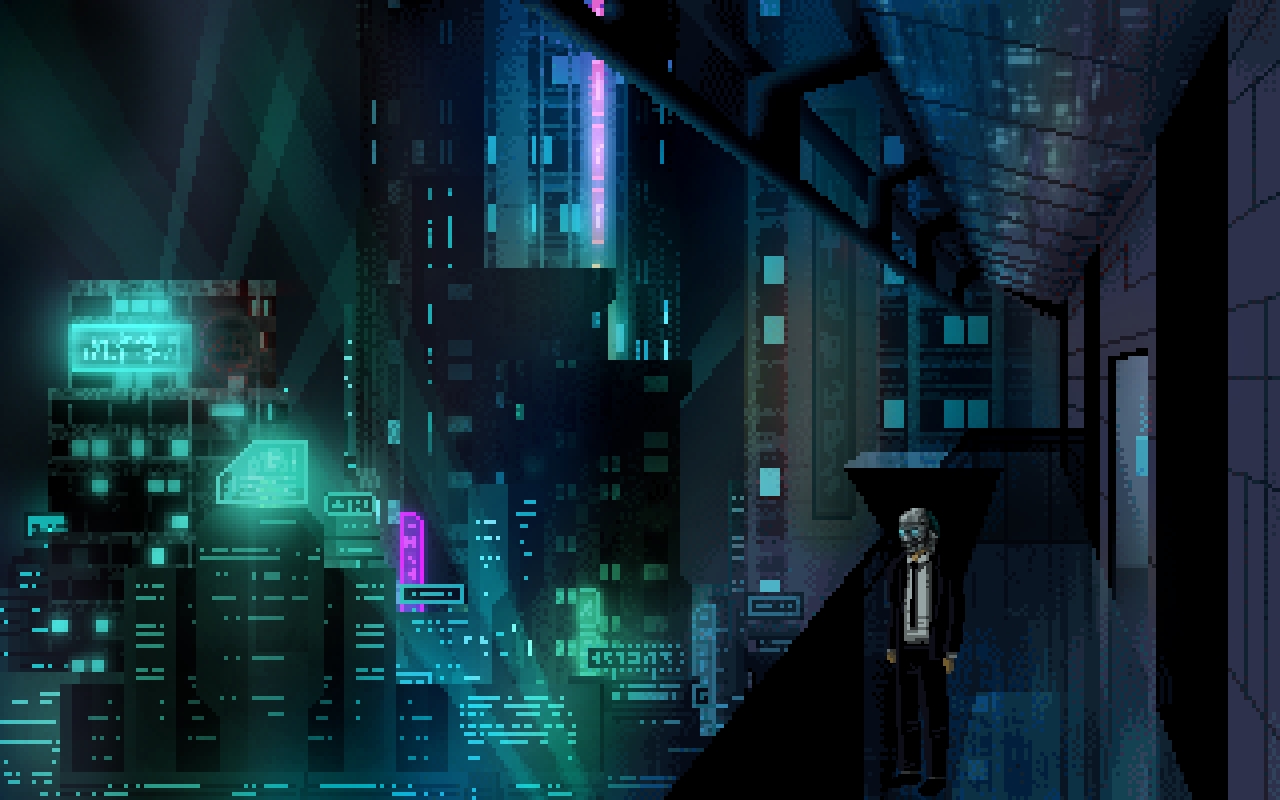 The levels are mostly an obstacle course with dangers of varying degrees of difficulty, from lasers to vanishing platforms and enemy droids. They are quite short and there is absolutely no need to kill anyone, except for the boss at the end of a chapter. Not only are the levels very short, most of them also have a checkpoint in the middle. The ending screen of each level rewards with points for not taking damage, shooting all the enemies or on a contrary being a ghost and leaving them all in one piece. These points are used to buy upgrades for the armor and the damage output of the weapons. In total there are 12 chapters for a total length of a few hours. 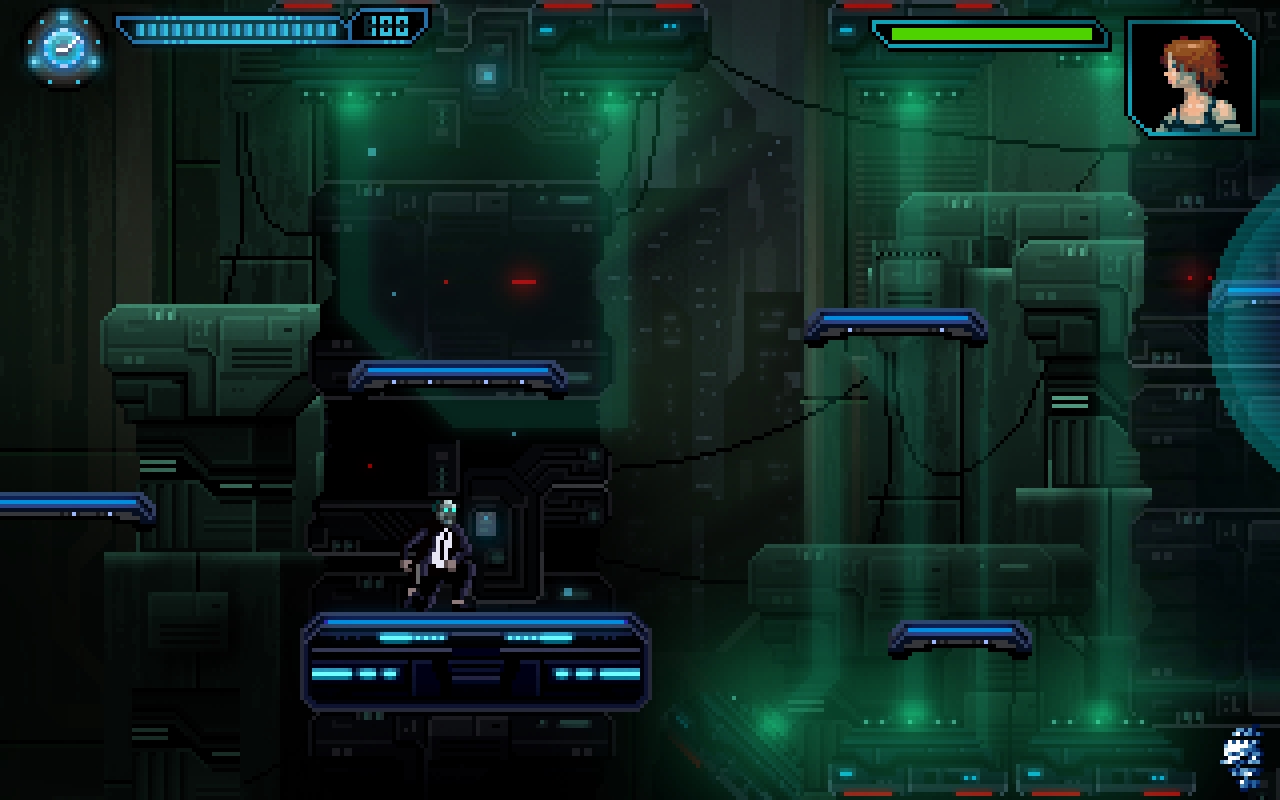 There are several weapons to choose from, and the shooting animation fondly reminded me of Flashback. No bullets to manage or anything, just run or stop to shoot then use your shield if you are about to take damage. The exoskeleton/helmet allows for slow-motion, which can be very handy in many situations. There is only horizontal aim, and most enemies are roughly on an horizontal position to the player so there is no issue with that. The keys can be changed, and the game can be controlled with keyboard, controller or mouse. Controlling with the mouse is an awful mess considering that drawing the mouse away makes the character sprint and having the pointer close to the character makes him slow down. Very difficult to maneuver in these conditions, and the platforming bits are not too easy.

My main problem with this game comes from the way the character moves. Sprinting goes way too fast (and I like fast-paced games!), and the movements feel very floaty, as if there was no weight despite the exoskeleton. In consequence, handling the hero seemed very approximate to me, which is NOT a good thing for a platformer even though everything is surprisingly responsive. And it’s a real shame, considering what comes next. 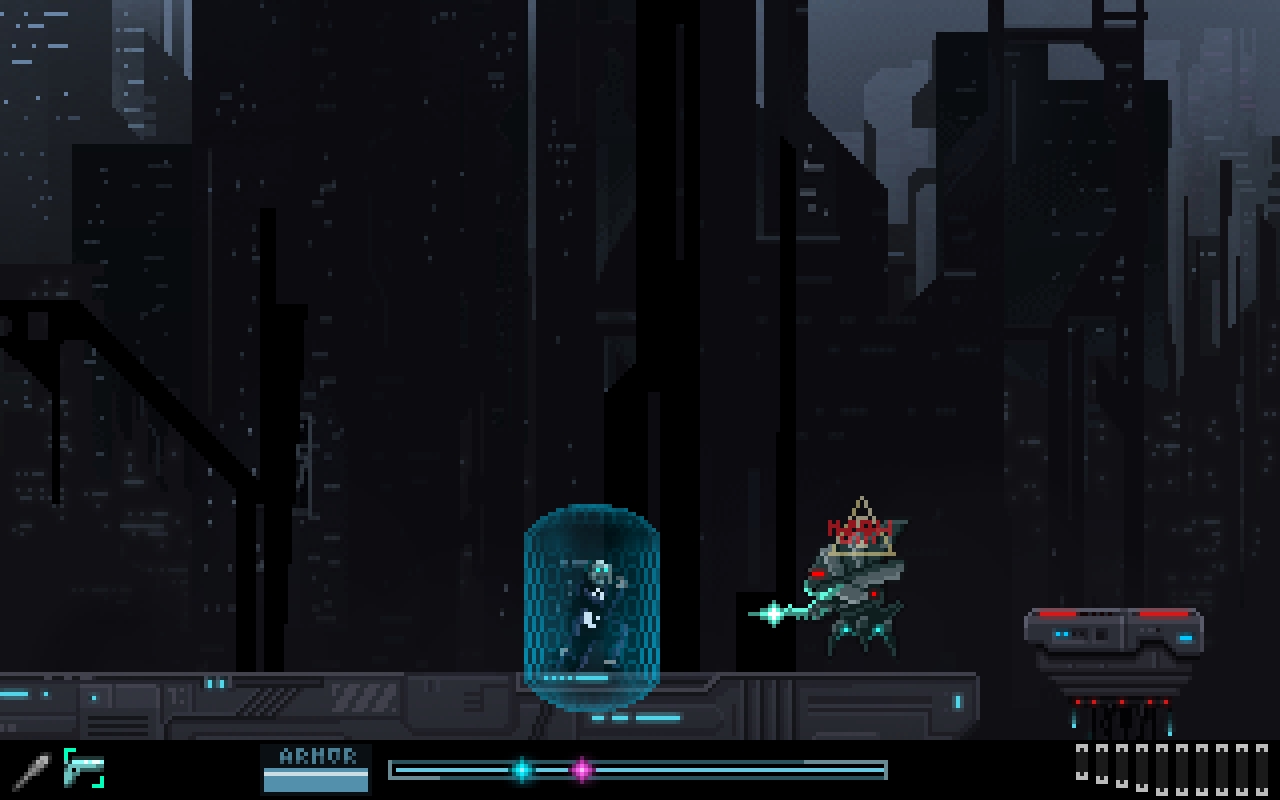 Something that action platformers can easily mess up are the boss fights. In some games I dread them because there is nothing fun about struggling to beat up a health-point bag for a few minutes and having to start over if I did not manage to dodge an insta-kill attack. In Until I Have You, I experienced the opposite. The boss fights were so amazing that I was actually looking forward to them more than anything else in the game. Each of them is an actual fight, the player has to hit them, but there are only certain phases when it’s possible, and the player also needs to find the right location to avoid an incoming attack. Sometimes some lateral thinking is required to understand what should be done. There is an element of trial and error there, but in a way that feels very appropriate because all the elements are easy to grasp, it’s just up to the player to figure it out or experiment, and then it becomes rather easy to execute correctly. Each boss requires to be approached differently, and I can tell that the developers were very creative there. 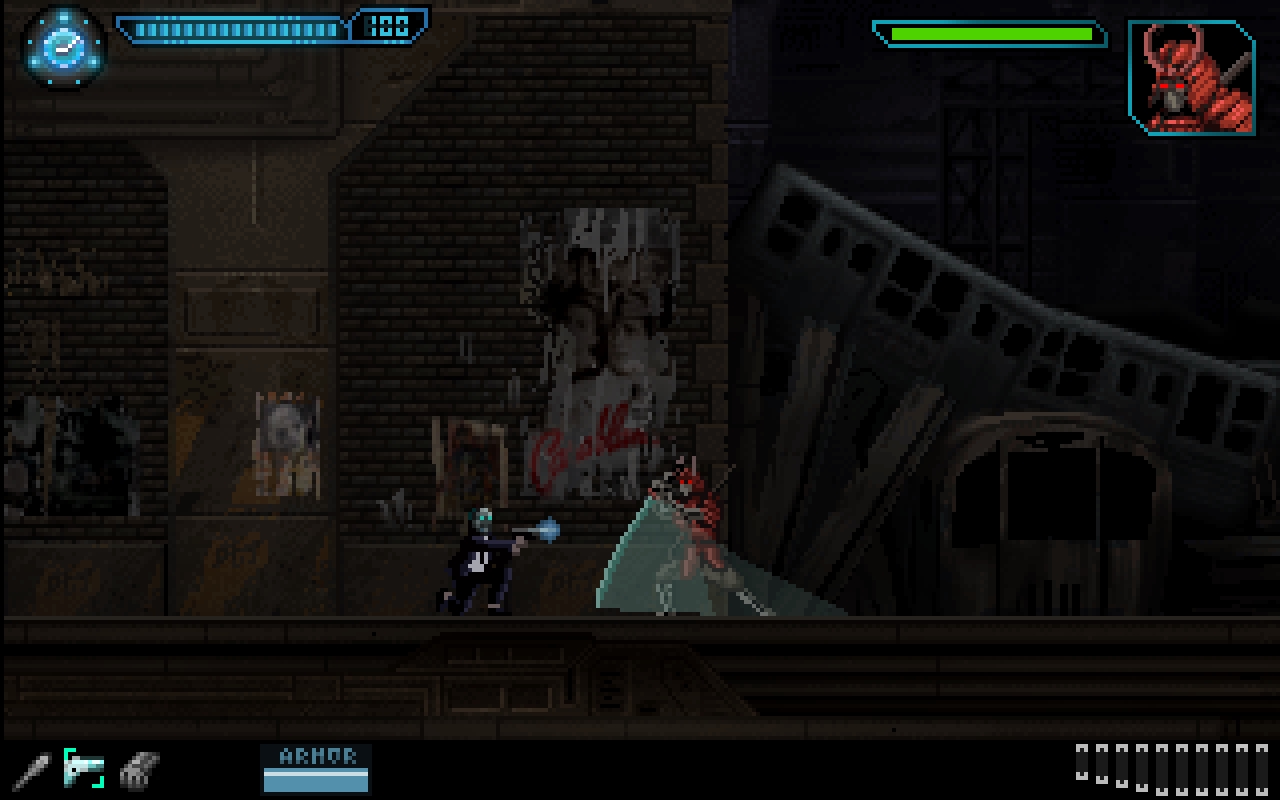 Until I Have You does not feel like a polished product. The engine is fiddly, running below 60 frames per second while the player character moves in a very approximate way, too fast and floaty. This for me ruined what is otherwise a very promising game, with quick levels leading to great boss fights teeming with good design ideas and a well paced difficulty. The cyperpunk atmosphere is well done, giving the sense of a futuristic nightmare despite the sometimes clumsy narration.
I would have trouble recommending it as it feels too amateur-ish, however the game is far from being bad and the developers show a lot of promise.