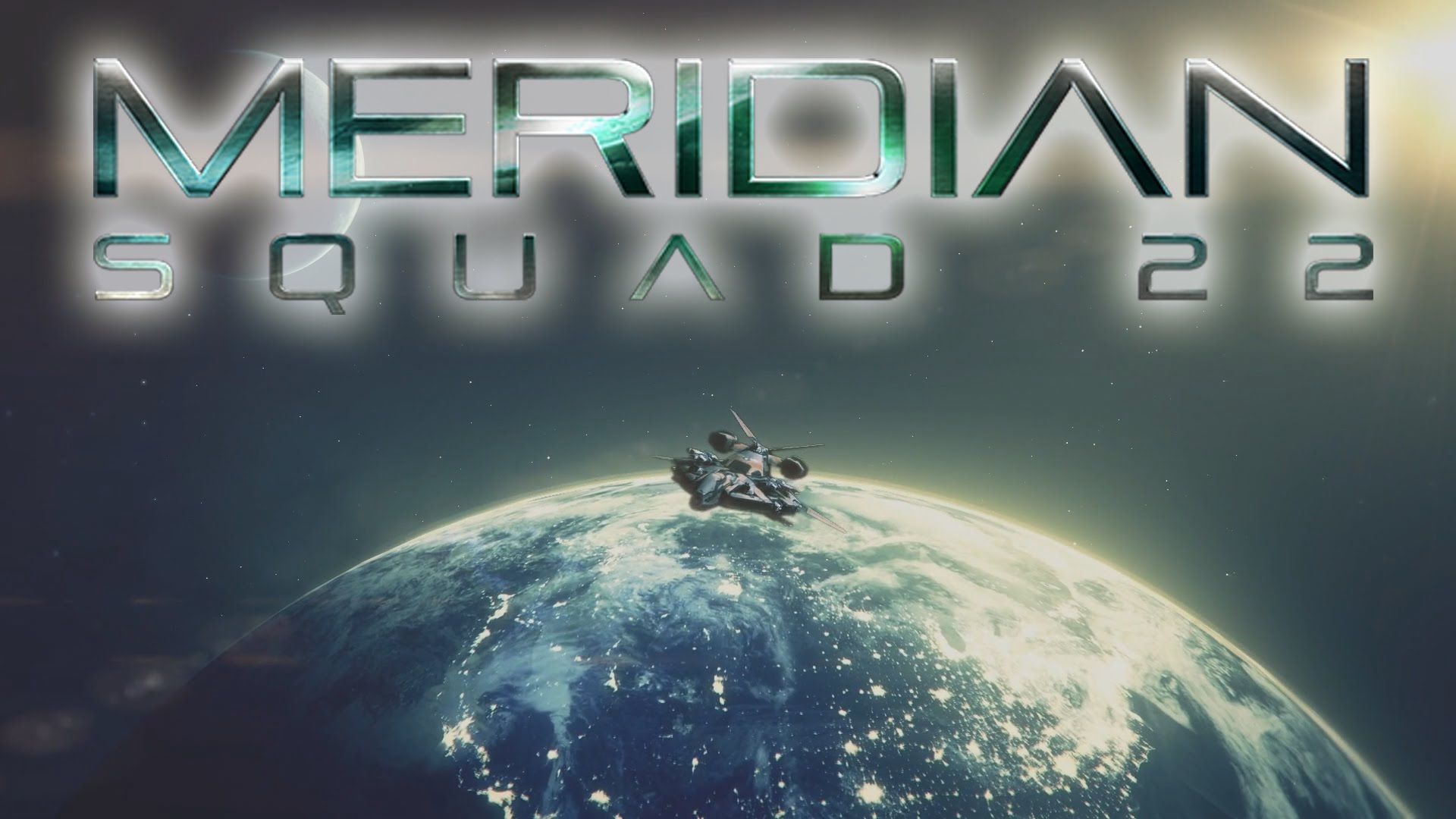 Meridian: Squad 22 is a 2016 Action RTS game developed by Elder Games. It’s hard to put my feelings for this game into words, because there’s a lot to talk about this game, yet really so few in the same time. It could’ve been a much better game, but a myriad of not-so-good design choices forces this fantastic looking game to stay on the realm of “slightly above average”. And before I go any further, I should mention that this game is a one-man project, and that’s an amazing achievement. I feel quite bad for being critical to this game, because surely the problem of this game is on time and budget, and the dev talent and effort is something that is truly praiseworthy. But a game should be viewed on its current state and value, so the big question is “Is it worth it”? Well, I’ll let you decide. 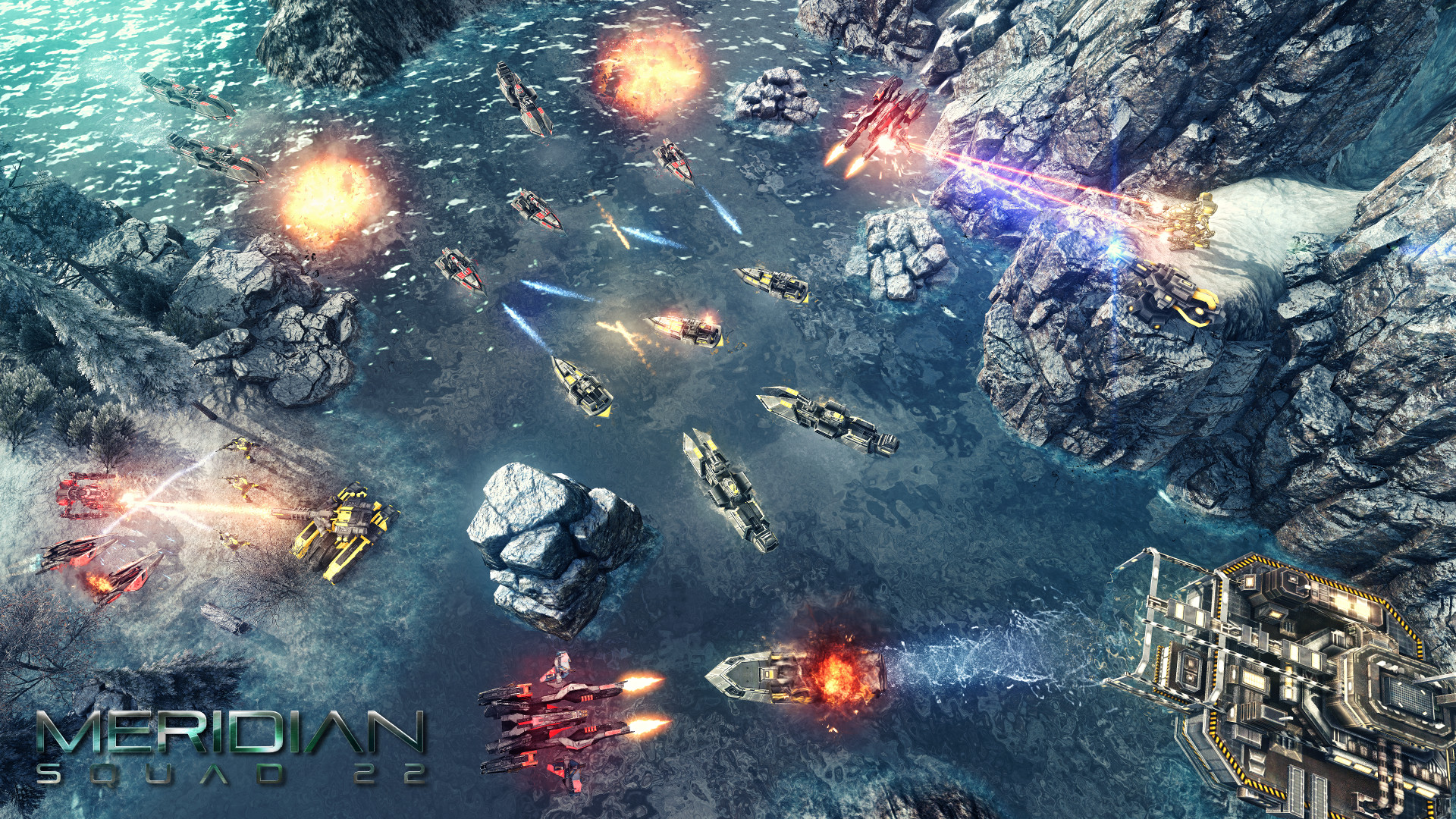 The first thing that caught my eyes is how beautiful this game looks. It looks sharp, vibrant, and crisp. Combined with pleasing color palette, amazing, bright and sparkly effects. And great level and unit design, It gives me a Starcraft and Red Alert 3 feel, especially the latter, “realistic” and imaginative, is the best words to sum it up. The unit designs can feel like it’s just a color change at times, but the level design is varied and detailed, and it keeps the mission fresh and interesting.

The other pretty thing in this game is the soundtrack and overall sound design. It is just so awesome! It sounds epic and dramatic, and has a lot of hype on it, and has some standout personality in it. And the sound design give me a strong C&C3: Tiberium Wars feels, especially the voice acting.

The last thing is the story, it’s well paced and reasonable. It doesn’t drag, and feels more believable than any other RTS. Some problems I found in many RTS games are the inconsistent pacing, over the top characters, and unnecessary filler missions. None are found here, or at least not as ridiculous as most. It’s tight and intense, with “believable” characters and plot developments. I won’t say the story is mind blowing or  something like that, not at all, but enough to keep going, and the thing that hold the story down is mostly because of the gameplay elements that I will touch… right now. 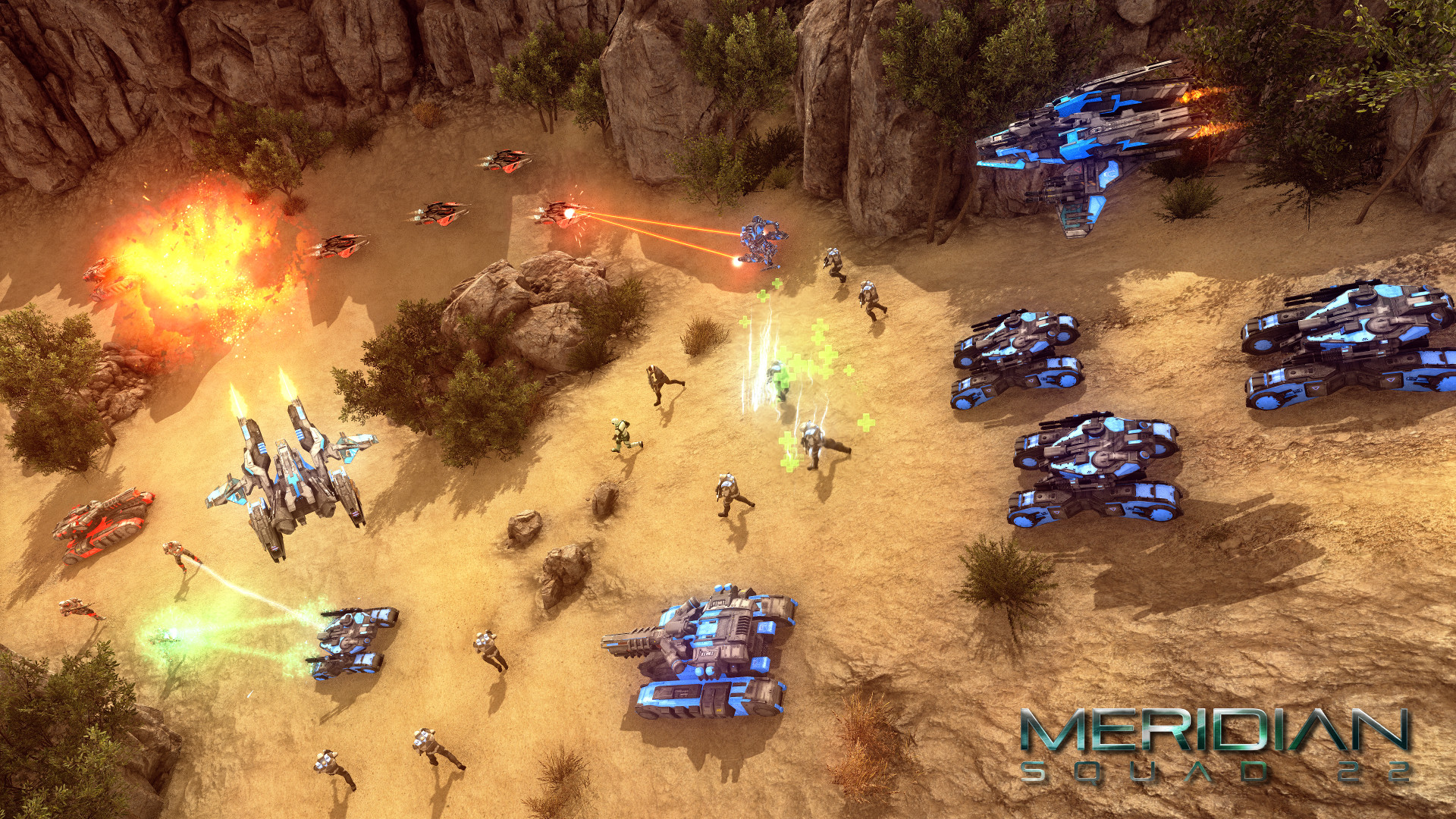 Shallow might not be the accurate word to describe it, it’s more like “generic” or “mediocre”. It lacks unit and building variety, and even then it’s way too “balanced” and pretty much a “text book” RTS unit types without any unique characteristic in term of function, but it’s not a big of a problem, it works just fine overall.

The big problem however is how restrictive this game is, especially on building placement. Squad 22 is already a small scale RTS, with a restrictive terrain, it only makes the game feels smaller it’s not even funny, Like, at times I’ll be like “Ok, I am in a level terrain, there is no unit / building here, there is a building that I build farther than this, JUST TELL ME ONE GOOD REASON WHY I CAN”T BUILD IT HERE!”, base building might seem trivial to players that is not well versed on the world of RTS, but it’s placement hold a crucial starting part of it, and Squad kinda messed it up. 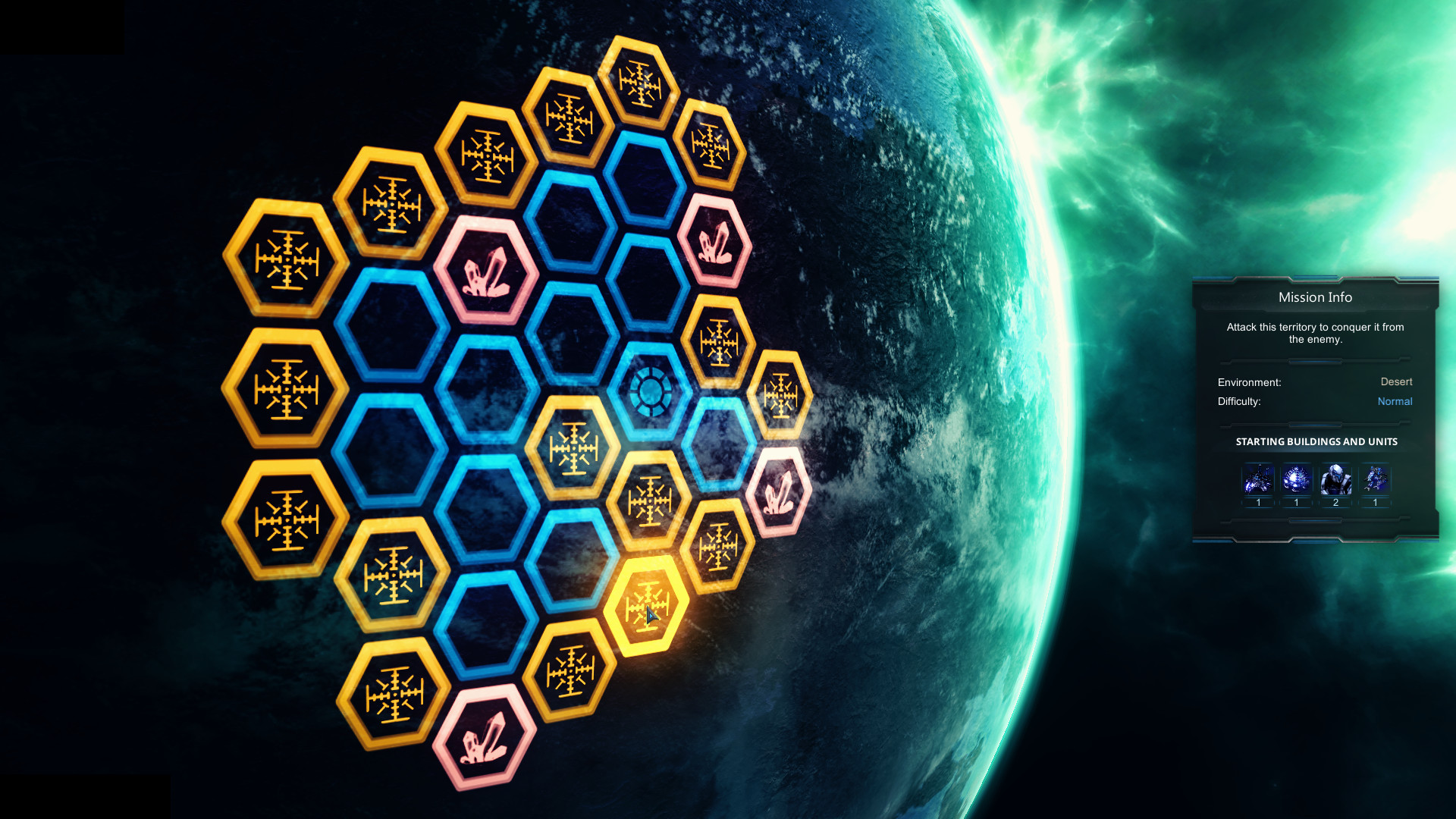 The other problem that  I have is the A,I. First, look at it like this: RTS is like a game of rock, paper, scissors. There are 3 major types of play styles Turtle (Rock), Rush (Paper), and Bomb (Scissors), and it’s apparent on a single player campaign in all RTS games, no exception. I mean, they’re A.I, they are not as complex, dynamic, and unpredictable as humans, of course. How do one cover it up? Make an epic scale battles with wide variety of units, which Squad 22 is none of those 2 (I don’t really mean it as a bad thing), or  make the A.I more dynamic and adaptive, which sadly is not the case. Playing with the A.I is like having a match of rock, paper, scissors, but the A.I decided to always choose paper and not even consider choosing anything else. They’re basically on paper rusher, sending small waves of enemies over and over again that it becomes repetitive and easy, the difficult thing is because they are constantly spamming them, and I can get overwhelmed at times.

In a more positive note on the gameplay is the research system, you collect canisters to upgrade your research tree. Not something ground breaking but it helps with the overall sense of progression. It’s not too much of them that you will be underpowered as the mission progressed, and not too many that it makes you OP in the end. Also it is well thought of, I find it hard to decide which skill that I should spend this canisters on, and each tree offer their own unique playstyle which add some replay value.

Other part to note is the technical side, which is surprisingly pretty good, it’s stable, no game breaking bugs, and runs well/ 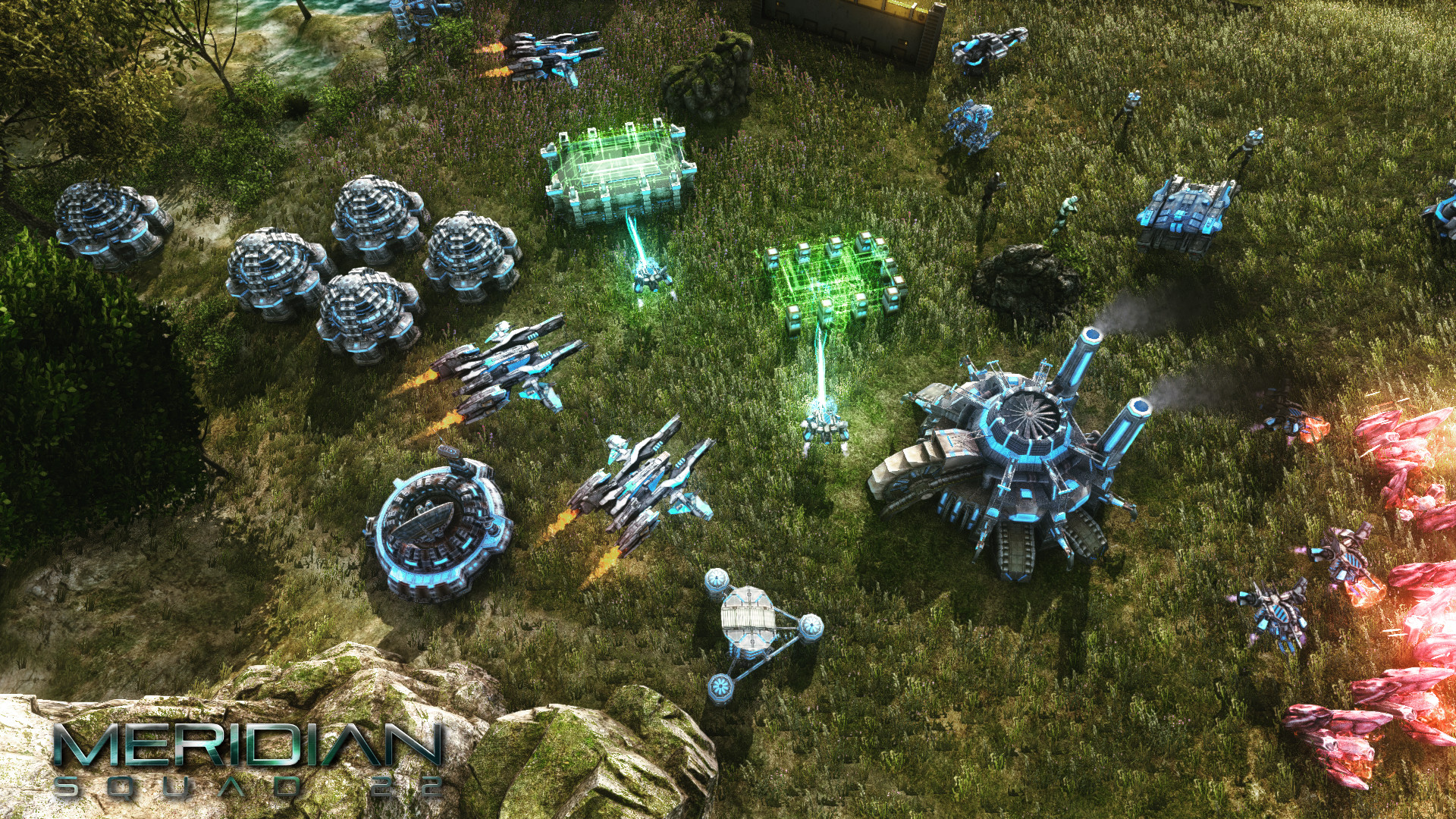 Meridian: Squad 22 is an easy game to pick up. Fantastic graphics and sound design is the true standout of this game, a good story do helps this game, but in the end.. the gameplay Is the core of a game, especially strategy game and that’s the problem lies. I won’t say it’s bad, because it is not, its just lacking and restrictive. For a single player game, the A,I is too predictable. Thankfully, the research tree is well done and that helps adding the depth it needed. The gameplay, is way too balanced and “safe”, contrasting the imaginative visual. So, is it worth it then? If you consider yourself a big fan of RTS, you should consider it when it’s on sale, and for the ones who don’t, I think it’s a good starting point, if you find something like Supreme Commander, Red Alert 3, Tiberium Wars or any larger scaled, more complex RTS is too “intimidating”, Meridian: Squad 22 will give you a small taste of what you’ll get in those titles.