Your first mistake was messing with my dog.

You play as Flynn who was having a particularly lazy day that was rudely interrupted. After waking up from having a strange dream, Flynn takes his dog Dex (which also happens to be Rosantica’s Guardian) out for a walk and to do some sword training while he’s at it. Of course, once the chance of napping under a tree comes along he takes it up (and Dex does too). This time it was due to a loud bang and upon inspecting what caused it, he finds that a girl named Rozia smashed her way into a shrine wielding green weapons and magic. She sprouts on about how she heard about Flynn and how she’s going to destroy Cardinal Island, but the one thing she was there for, the Crimson Sword, was granted to Flynn. Rozia, knowing that she’ll get beat if she stays too long, decides to instead take it out on Dex by stealing the Guardian Spirits within her.

So throughout most of the game, you’ll go searching for the Guardian Spirits to bring Dex back to her original strength, help out with stopping the spread of the mysterious Scourge, and to take out the big bad that sent Rozia out to do his dirty work. Not to mention that Flynn will learn that he isn’t just a normal kid with good sword skills and a dog he can literally ride like a horse. He may actually be the son of Goddess Sorrell, which explains why she chose him to talk to and to wield the Crimson Sword. 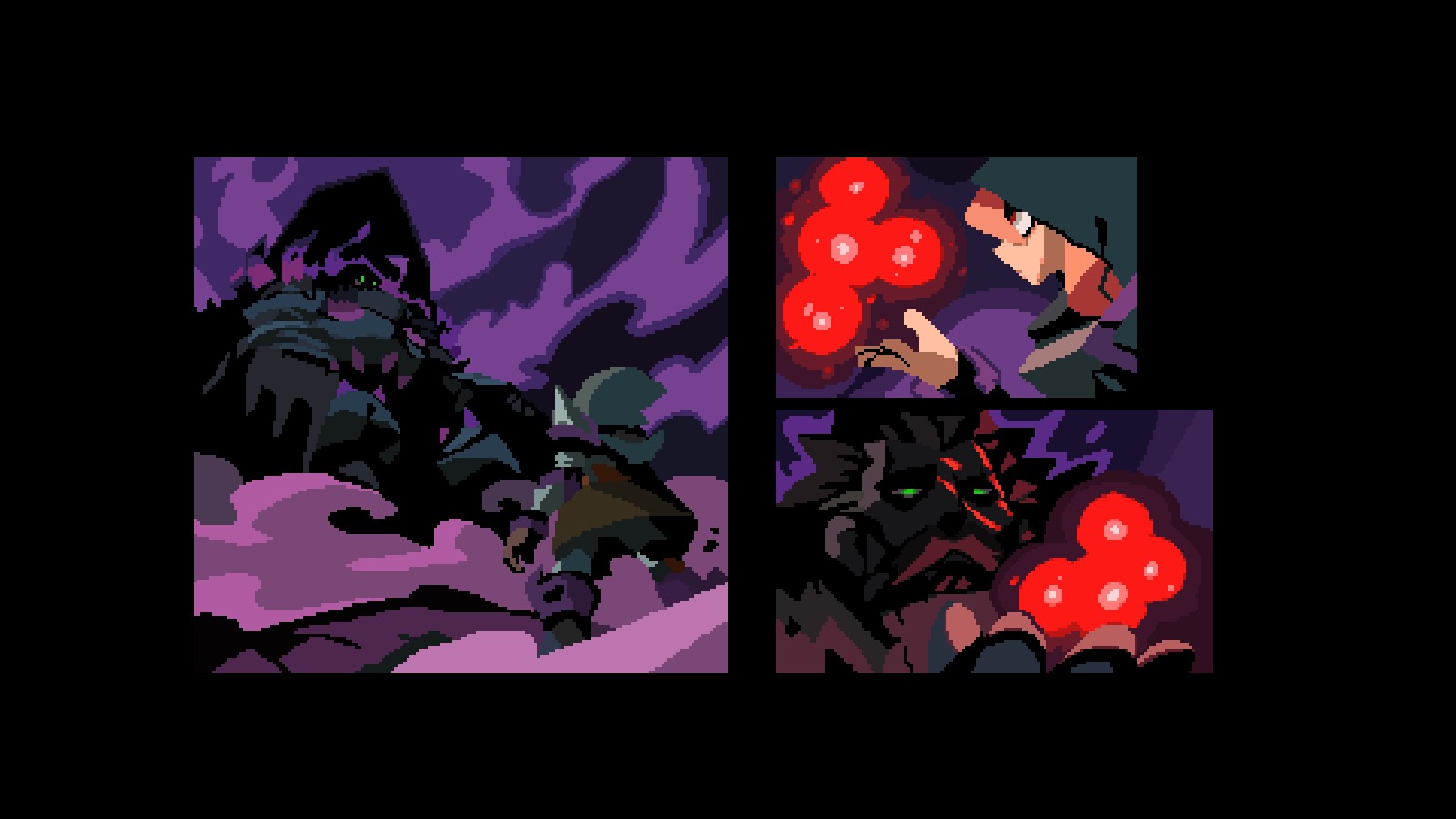 The various areas you’ll be going to are segmented into separate levels on the world map. While some are the various towns, the majority of them will have you going through dangerous areas filled with enemies, with the occasional easy puzzle where you find out a way to reach a high ledge, find red diamonds to open up doors, and use elemental magic to continue forward; and the occasional platforming challenge. The only time I really had difficulty regarding just platforming was the areas where it was dark, which caused platforms to not be as easily seen, and the one part where you have to grab onto a ladder after jumping off of a moving platform due to ladders being a bit finnicky. Some levels also do have gimmicks to tie in with the area you’re in, like have sections where you go in water, the one where there’s acid rain, and a few with strong winds that threatens to push you off platforms and generally make it hard to push forward (which was admittedly annoying). The enemies stationed here, which have different variations depending on the area you’re currently in, are the main hazards that you’ll be up against, aside from pitfalls and spikes. The combat here is one of the types where it feels awkward until you unlock a longer combo string (with even upgrading it from two to three making a whole lot of a difference). There are smaller enemies which you can essentially stunlock and other stronger ones that have a stun bar that you fill up instead. When enemies are about to attack, you can tell by how they flash (or by the beginning of the animation) which you can use your trusty dodge roll. 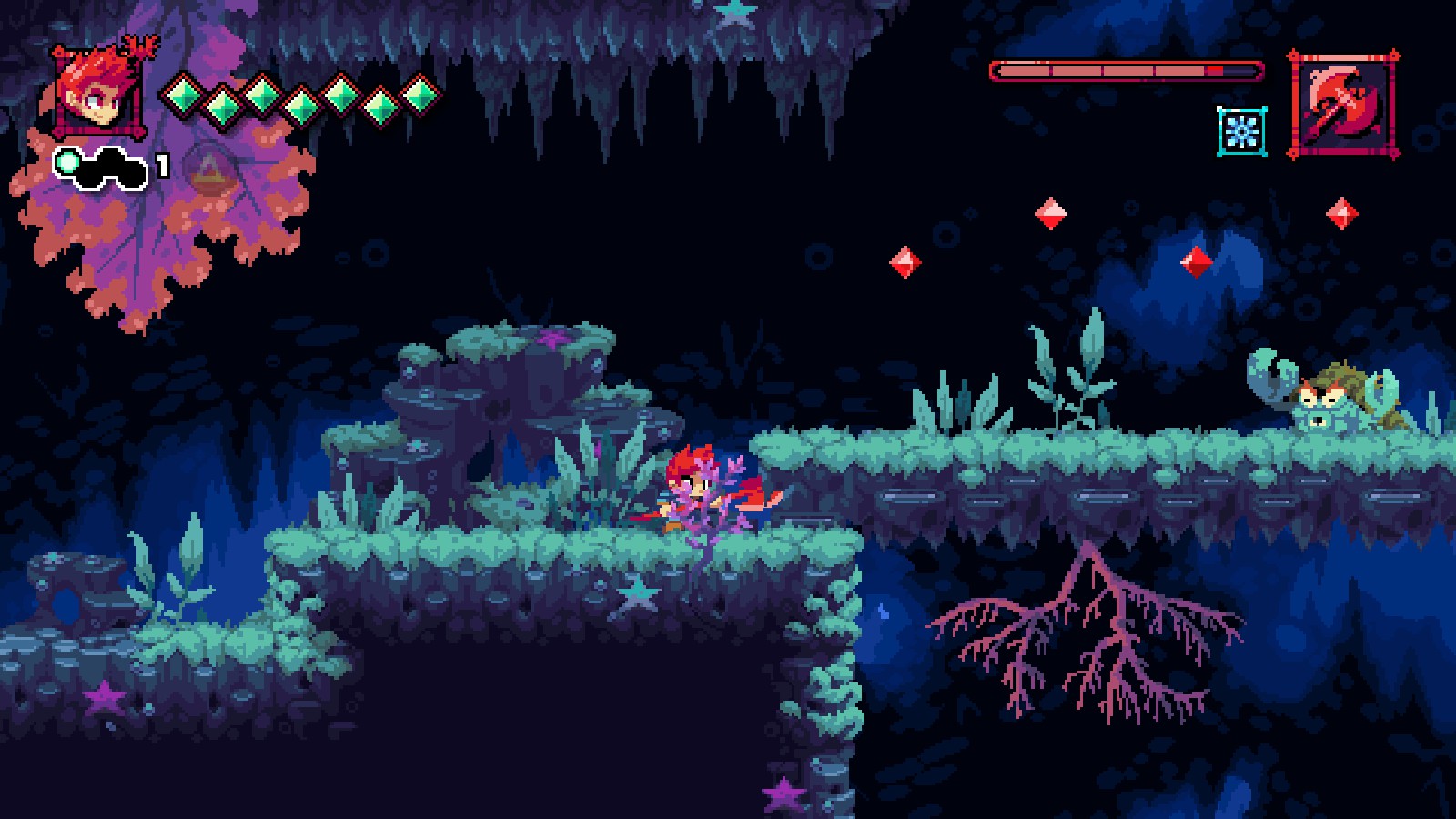 Later on, you do unlock more to add to your arsenal. You’ll eventually unlock the Crimson Charge which will let you essentially go into a temporary berserk mode once you fill up and release the meter for it. And trust me, the battle is basically over once you release it as you can quickly take down enemies (including bosses, especially since your current charge stays if you die). As you beat bosses, you’ll also unlock different weapons so you can have a hard hitting, but slow axe and the quick claws that work great in the air; as well as elemental magic which changes your charged shot (sadly the uncharged shot isn’t changed) which can cause status effects, help defeating certain enemies that need elemental damage, or to help with platforming. Though, these are used as a way to block paths so you don’t skip a whole area, like you can’t go down that route blocked by tree roots until you get an axe. Or go up this alternate way until you can wall jump (which feels terrible until you let the game do its thing and not press in the direction you want Flynn to jump to). There’s also a skill tree, which is where the red gems, or the currency here, are used to increase your health and increase your attacking power (which I recommend investing in health and a longer combo first thing).

I have to admit that I did get tired of fighting, and you can easily just roll out of the way if you really want to. There are some areas where you can’t continue until you kill every enemy, but the only thing you’ll really be missing is the red gems they drop and refilling Crimson Control, both of which you can get by destroying the red crystals on the map and pick up recharges respectively. 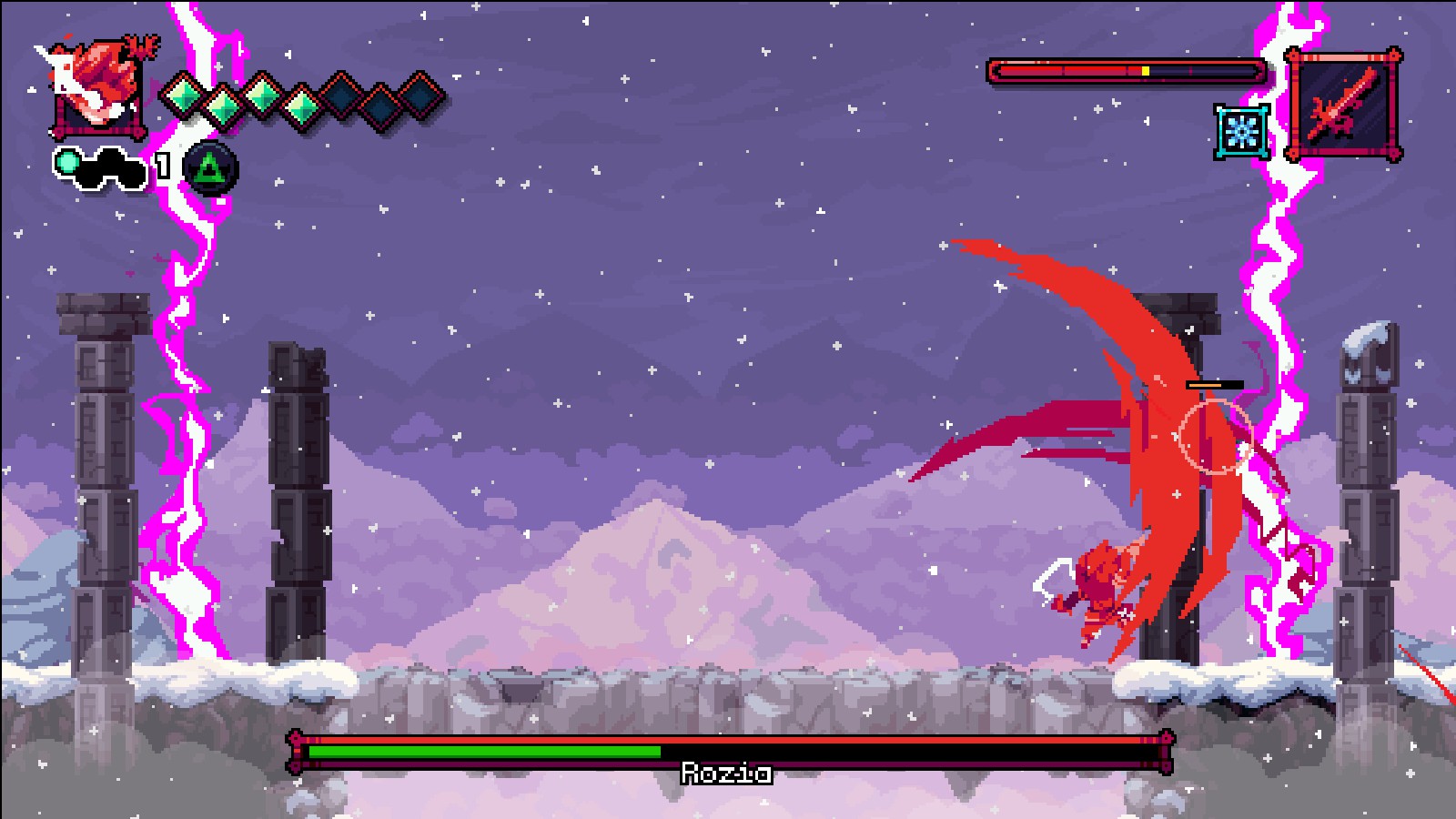 If you do die in a level, it’s really no big deal. You lose a small percentage of your money (5% on Normal difficulty) which is pretty easy to get back and you’ll be set back to whatever the last checkpoint was. There are certainly annoying checkpoints where the checkpoint is all the way at the beginning, and of course you’re set back at the beginning at boss and Challenge levels, but for the most part it’s no big deal. After all, the enemies and the gem deposits respawn. 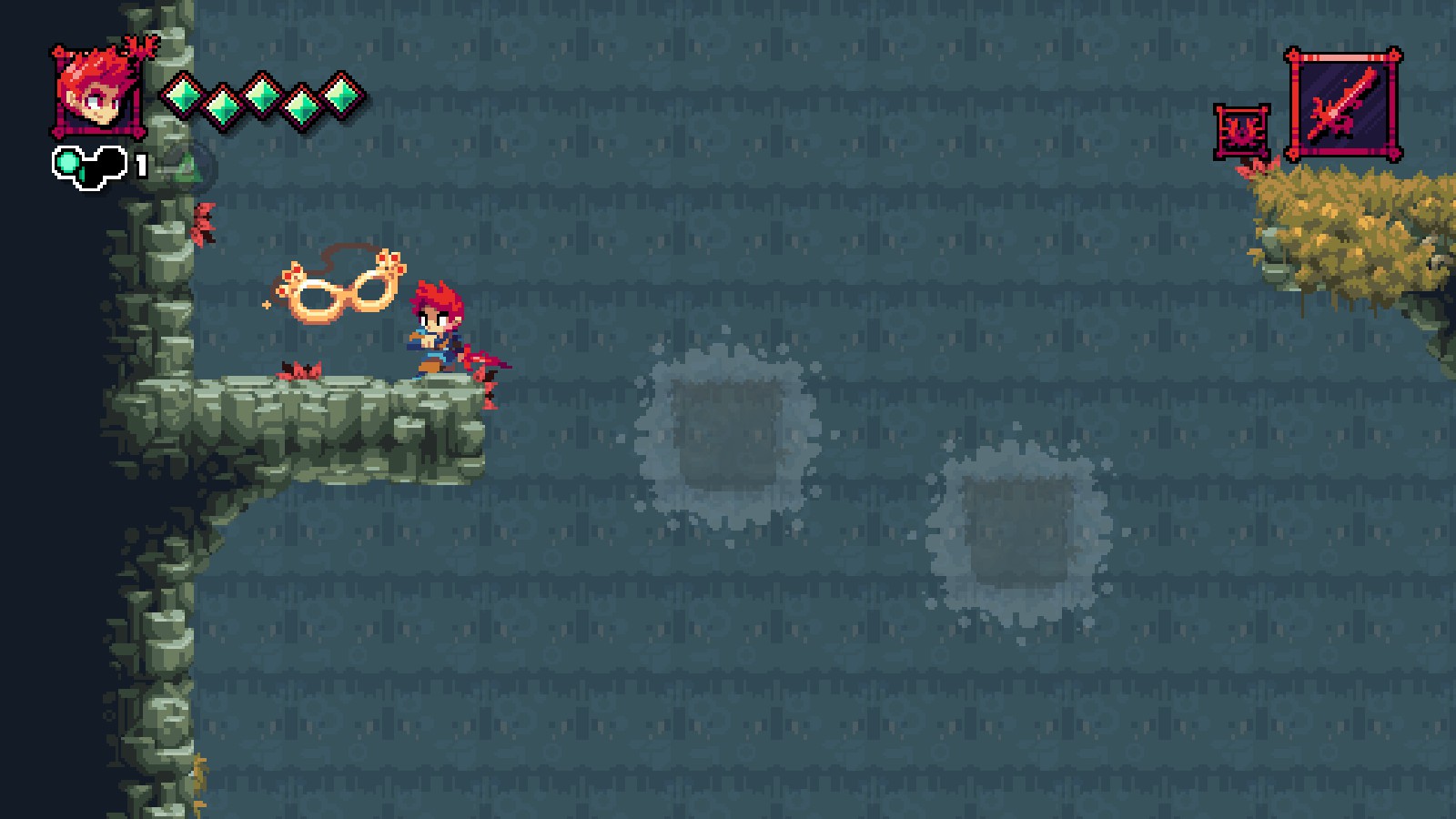 You can also try looking out for relics, the collectibles here, as finding them can net you some quick money, especially if you’re just short from getting an upgrade. The level will have an outline if there is one there and you just have to look for red flowers, which mainly show that Flynn can walk through that wall, with some involving you going through an alternate path. These are cleverly hidden and you can find them if you’re looking out for any suspicious red flowers or exploring every nook and cranny. 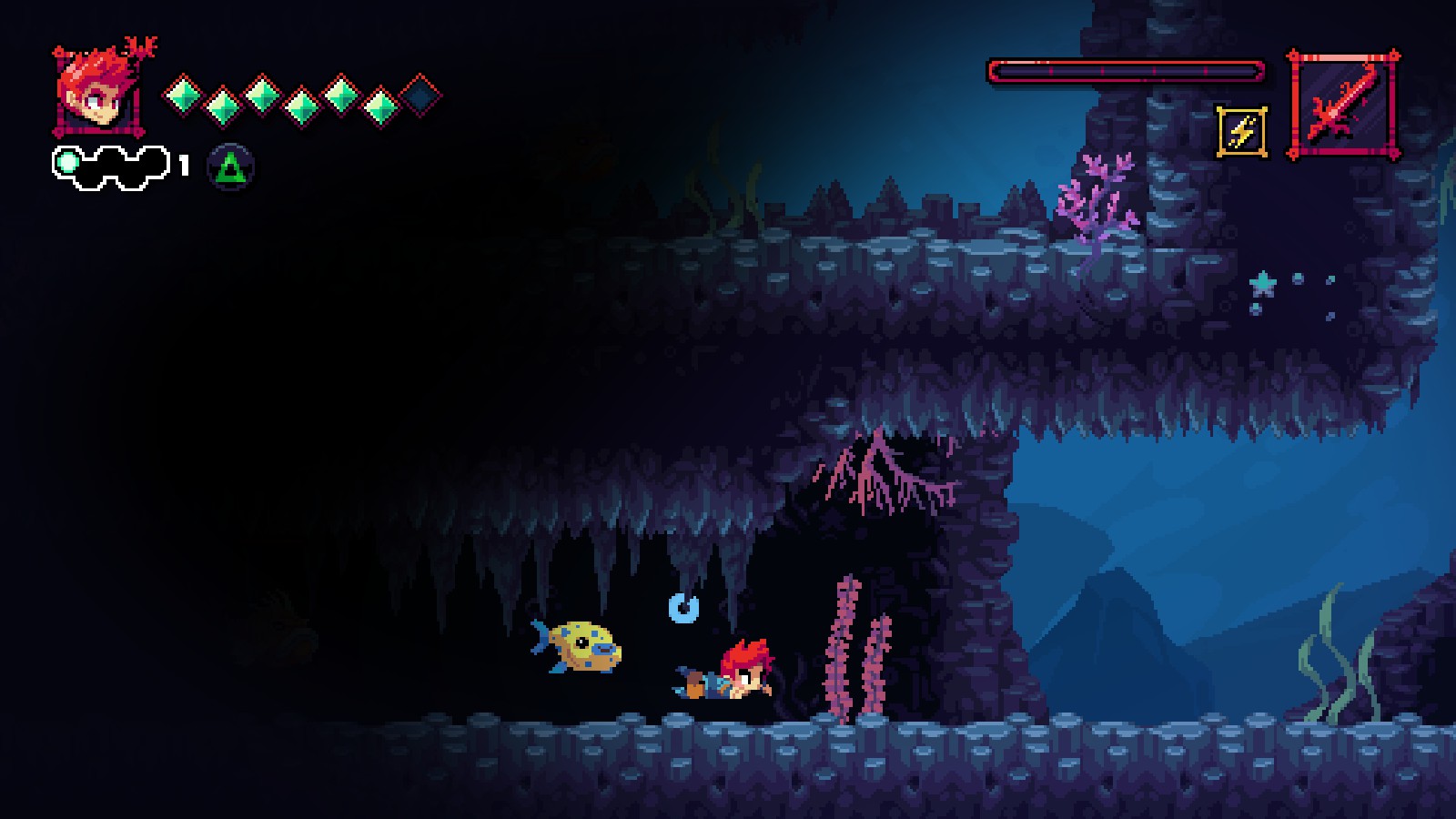 After certain levels, a Scourge portal will open up and will cause every other level to be in lockdown. The only way you can open everything up and continue on your way is to find where the portal is (which isn’t that hard as you can instantly travel right to it). These are essentially an alternate version of that level, with different twisted enemies, where you have to shatter the portal’s core located at the end of the level. While these Scourge levels were pretty annoying, due to how dark they are and the enemies being particularly annoying that I just ended up speeding past, it was interesting. It was interesting seeing the alternate versions and part of me does wish this was used more or at least not a way to break up your progression. 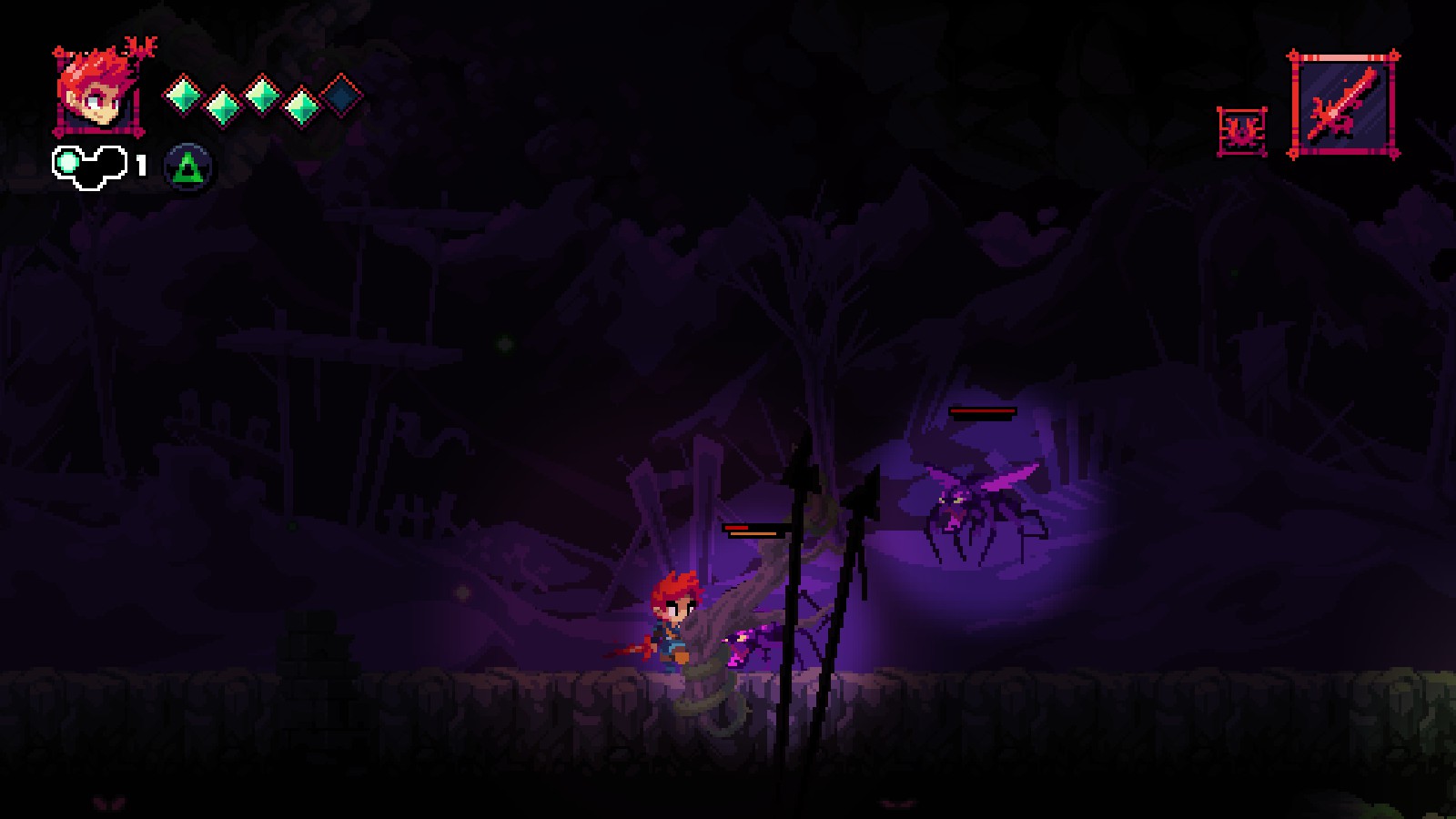 There are also Challenge levels that you can do. While you’re going over the different levels on the map, some of them will mention having multiple exits. Some are just going the opposite way (though may require you to progress more to get the needed ability), but six of those exits will be a locked door. I wouldn’t be surprised if some went through to level again to see if they missed a key, I certainly did, but the key doesn’t actually show in that level. You just have to progress more completion wise before you find a character that will give you key (or progress more so that character will give it to you later). And then all you have to do is go back into the level to find the door again, which all but one are pretty easy to find due to them being close to the start, you’ll unlock the path to the Challenge. What could this challenge be? It’s just the standard defeat all the enemy waves in a pretty empty area. I wouldn’t recommend going in immediately, as you won’t know how many waves you have left, strong enemies show up, and you only have the health and heals you currently have as you don’t have a chance at filling up the healing orbs here.

I’d say that Flynn: Son of Crimson was an overall average game. It had interesting ideas and it certainly was just about enjoyable for me to see to it to the end and get all of the achievements, but didn’t really do as much with it as they probably could. And if you expected the big dog, Dex, to be with you most of the game, which admittedly was the reason I was a bit interested in this game, you’ll certainly be disappointed as she’s not used as much and is really relegated to the last two areas and only in a couple specific instances. It looks beautiful and there’s just enough to keep your interest, but I wouldn’t rush to pick this game up. This wasn’t terrible, but it wasn’t great either.