How about we have a code word so you know it’s me when I travel back in time.

In Bustafellows you play as a 21 year old freelance journalist named Teuta, which you can rename her to another five-letter name if you wish, working in New Seig. She even has her own newspaper column in the local newspaper, New Seig Today, which it seems is loved by those that read it as she aims to look into perspectives that aren’t normally thought of and it’s often described as not pushing an opinion on readers. Though, she has an interesting secret. Teuta has the ability to go back in time. Seems a bit overpowered just hearing that, but there are some caveats. Teuta can only go back at most a couple hours, she has little to no control on how far she’s going back so she has to hope for the best, she has a hard time remembering what she saw or heard once she returns to her current time, and she gets put into the controls of a random person. 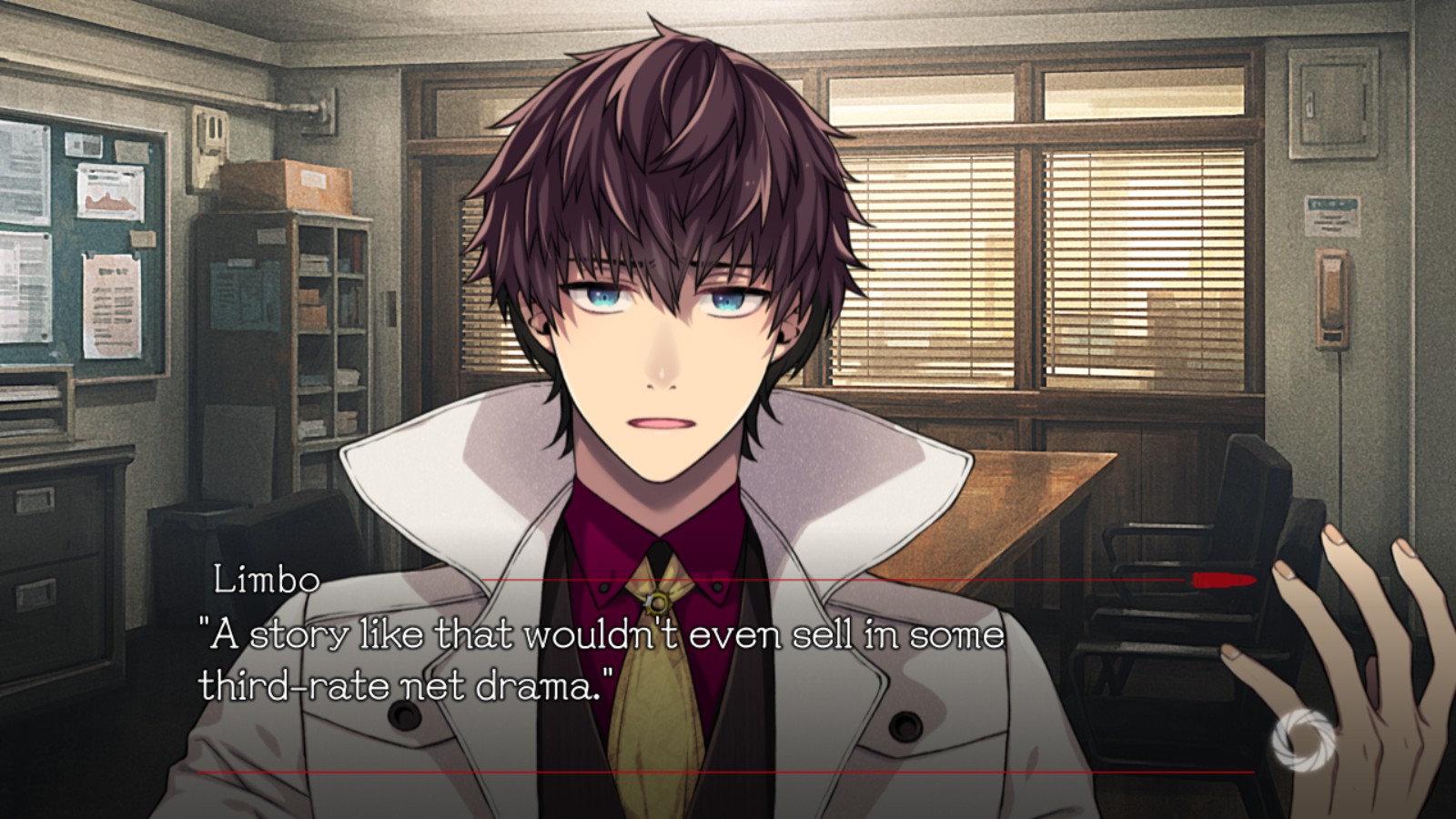 This very power pretty much caused her to run into the five love interests. Limbo, nicknamed as the crooked lawyer by the public, was actually someone Teuta was looking into interviewing. As she was coming out of another interview that was cut short after being given a cryptic note, she runs into Limbo and soon after he was shot right in front of her and died. Teuta then decides that she’d save Limbo and goes back in time and while Limbo didn’t really believe her, he avoided the area he was originally shot. Limbo is understandably suspicious and he brings another one of his friends, Shu, to see what her real motivations are. Not even telling Limbo what was in his pockets convinced him, but due to Teuta mentioning certain names he decides that it’s best to keep her close. This turns out to be perfect timing, as she was looking for another place to stay as the apartment she lives in is basically about to fall apart. This also pretty much has her caught up in their various schemes as well, which she helps out in as it might help her with writing a juicy story.

And from here, Teuta gets to officially meet all of the five love interests Bustafellows has to offer. We already know Limbo, the confident crooked lawyer that can seemingly get anyone an innocent verdict, but he does have his own set of morals and want justice to be dealt to those that deserve it. Next is Shu who is the group’s hitman and smokes way too much, even trying in places where it’s not allowed or doing it in spite of others not wanting smoke in their faces. Shu has his own kill list for personal reasons, but he does take up other hits whether it’s for the group or for another. There’s Helvetica who’s a popular plastic surgeon that’s a master of disguise and changing his own voice and is way too focused on looks based on how he rates other women and comes off as narcissistic as he knows that he’s attractive. Next up is Mozu, a coroner who works closely with the police as he often is requested to do autopsies due to his proficiency, but he will often fake corpses and reports for the group if needed. At first, you really think he’d be the one that isn’t too sociable or detached, but he has his own sense of humor, he cares about his friends, and he is often more in tune with knowing how other people are thinking or feeling than others. And lastly, there’s Scarecrow who gives off a mysterious and serious vibe as he’s a self-proclaimed “Boss of the Underworld” and is the group’s computer geek that has master hacking skills, but he’s actually an awkward cute dork that gets dunked on so much he implemented a “Respect” jar… which the others will often put money in in advance to insult him.

I was actually quite surprised with how much I loved the love interests. It’s really easy not having the best impression on most of them when they first appear, but as Teuta hangs out with them more and you get to know them, they really do grow on you. Really, the only one I didn’t like as much was Helvetica, but that was mostly due to his Side B and extra episode. They all give off a “found family” vibe, despite how much they say they’re totally not, and they have a really good dynamic with each other (which Teuta easily slides in). I loved every scene where they were interacting as it really elevates it and made the funny moments even funnier (even causing some surprised “he did not just say that” reactions where I couldn’t stop laughing) as you can realistically see these characters doing what they did. Bustafellows does a really great job in establishing these characters so much in so little time. 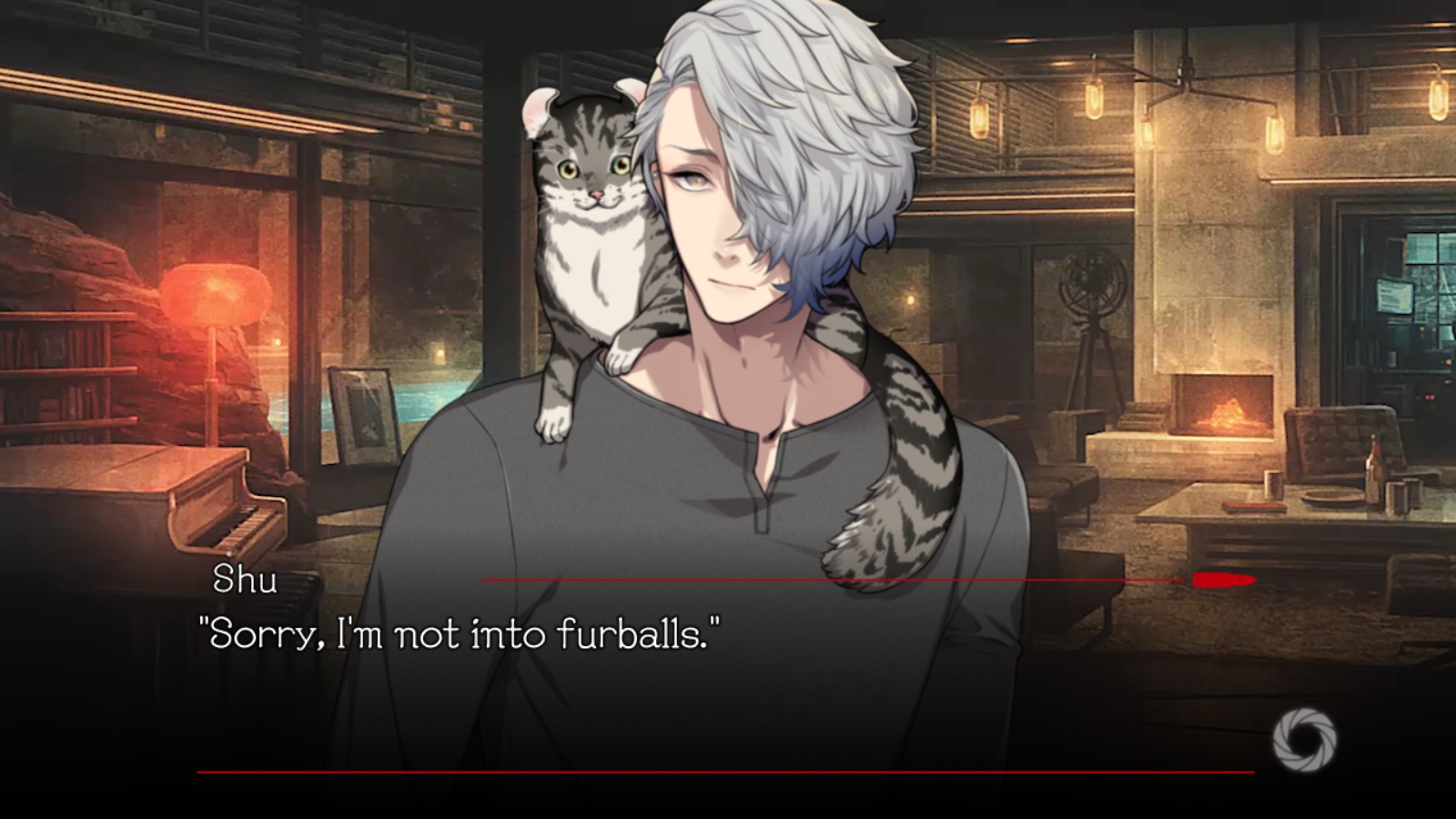 After you complete the first four chapters, you’ll be able to go down the love interest routes. The route you’ll be going down are based on some of the choices you’ll make, but stem mostly from a little quiz you get, and there are two scenarios that confirm which route you’ll be going in. You’ll go down the route right after the end of Chapter 4 and their route mostly deals with their past and their trauma, though there is room made for them to get with Teuta. I do recommend doing your first playthrough blind just to see who you get first (I personally got Scarecrow first). Once you finish the love interest’s route, a “Side B” will unlock, which is basically an epilogue that may also have some cute or angsty scenes as Teuta and the love interest would be dating at this point, and an extra episode revolving around either Teuta, them, or both of them cooking something.

Aside from this, there are also Memorabilia which acts as an achievement system that tracks various choices and used to unlock more extra episodes for you to read.

Though, throughout the game and when going through the last two ending chapters that unlock after doing all of the routes, I really had a feeling that this would have benefited from being longer and maybe even having the love interest routes being the last chapters of the story. There are plot points that pop up but are ignored and forgotten about as the game moves on and a lot is often packed in a short timeframe. There are stories that do work with a fast pacing, but it does not work well with Bustafellows. Not to mention the two chapters meant to close everything out, which surprised me with how short both of them were and a lot of stuff that was revealed had little to no build up at all. To the point where it felt like it was a last minute addition to have a couple more twists and shocking reveals (which weren’t really necessary to beat down and crush the characters and the ties they have with each other). The last two chapters do have aspects that I loved and thought worked really well for the story, but it could have been better if there was actual build up to it and if it was longer. 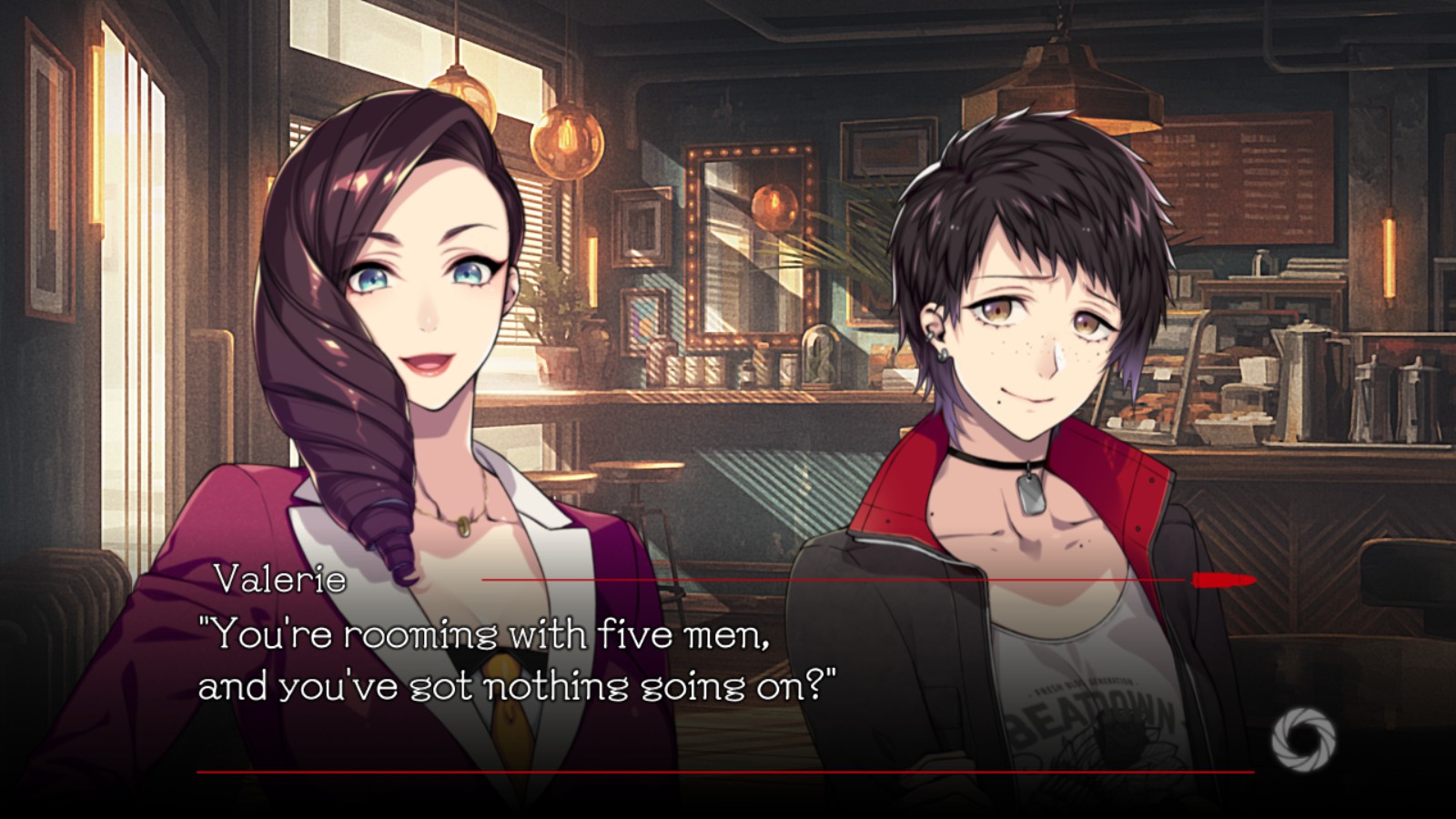 However, Bustafellows also other problems which I’m surprised most of them are in a $40 otome visual novel. There are little things like misspellings or using the wrong word here and there, flip flopping between Teuta’s brother’s name being Zora or Zola (most notably after Chapter 4), and suddenly shifting perspectives for one text box. But then you’ll encounter text that will go past the text boxes and the backlog (which shows up more towards the end) making you miss the rest of the sentence, there were a few sentences that didn’t make sense, there’s no option to change your resolution/go into windowed mode (which can make the videos and art look bad in places) and there’s no way to exit the game through the main menu. The controls for the most part also don’t follow the standard control scheme that many other visual novels have and aren’t usually used in games (at least I haven’t played any games that used the “Home” and “End” buttons). Not to mention that there are spoken lines that don’t get translated. It’s fine when it happens in scenes, as it is translated and in the backlog and in retrospect most of it isn’t necessary, but there’s a whole ending video that isn’t translated and there are six other extra videos (that are focused on two characters talking about… something) that aren’t either (these could definitely have had subtitles added in like the trailer video). It also seems that the Memorabilia has a chance of glitching as well, as one of the early ones you can unlock in Chapter 2 won’t unlock for me, which has also locked me out of one of the extra chapters.

PQube has mentioned that there will be a patch coming soon a month ago, though it’ll focuse on bugs/typos, but as far as I know and experienced, it hasn’t been released yet.

While Bustafellows has disappointing problems both with how the story was handled and on the technical side, I would still recommend it (though maybe not for full price). It was an enjoyable experience that I honestly couldn’t put it down, despite my original plan of spreading it out, where the only thing that got me away from it was when I had to eat or sleep; and the artwork and voice acting was great. I wouldn’t get this if you were expecting a great crime mystery, as it turned out to be the weakest part of Bustafellows, but if you want great character dynamics and a “found family” feel this will satisfy your desires.

There has already been news of a sequel, Bustafellows Season 2, in the works with the confirmation of it being localized, so it’ll be interesting to see how that’s going to turn out. I’m guessing it’s going to touch more on what there are still questions on