Don’t worry, you’ll be all better after I jam this thing into your throat and force you vocalize.

In Mind Scanners, you play a citizen that lives in a diamond shaped city called The Structure, and while being a Mind Scanner sounds like it’ll be kind of fun and interesting, you actually haven’t aspired to be one. The Structure (confusingly enough, the government is named the same as the city) has actually taken your daughter sometime before the game has started and you’re told she was put under quarantine after a “highly contagious mental illness” was detected. What that is? Well, who knows they won’t tell you. But you can visit your daughter still right? Don’t have that high of hopes. The only way you can get authorized to go into The Zygnoka Institute To see her is to become a Mind Scanner and get to a Level 3 Citizenship. And that’s exactly what you do.

As you pass the days you do get more information on what’s going on in The Structure and what’s happening outside of it (which is called The Outer Zone). Like how there’s this thing called The Pulse that some citizens have that can cause the technology The Structure uses to break down. As well as a group called Moonrise that aims to bring down The Structure. You’ll learn this sooner rather than later, but the treatments Mind Scanners use have a side effect. And while The Structure doesn’t really care, or may even prefer it, Moonrise does care. 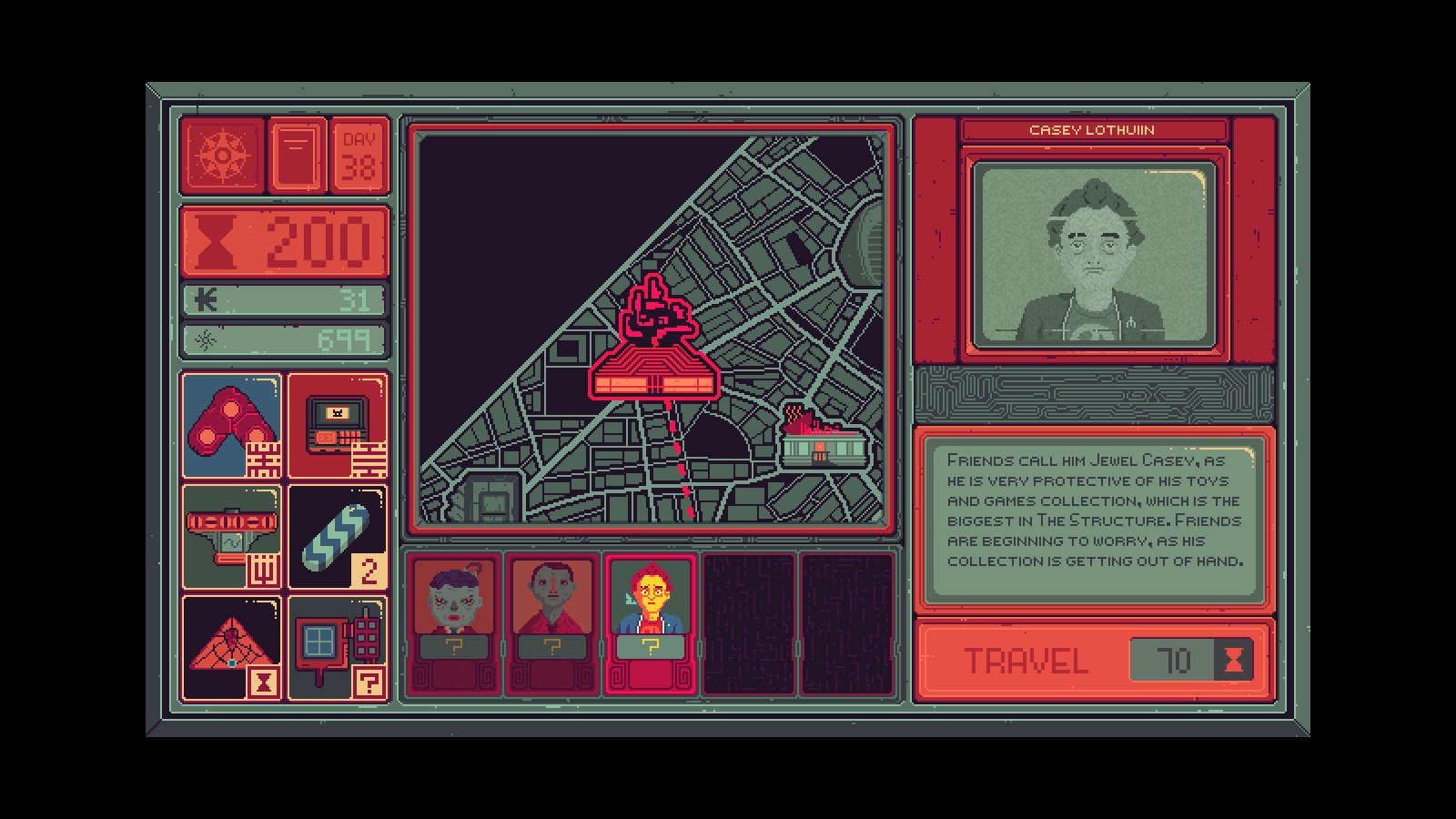 Anyway, you are now a Mind Scanner and you have a job to do now. Every day you will start in a random location in one of the many districts (surprisingly The Structure is bigger than it seems) and you’ll be given a couple of citizens that have been marked for possible treatment. They were either flagged by The Structure or by those around them. You also do get a quick overview of who they are, what they look like, and why they might need treatment. Of course, you can’t exactly go to everyone as there are only so much time in one day (200 to be exact) and traveling to them will take time depending on how far they are. So you can go to anyone that’s closest or someone that seems like they need help the most. Once you pick who you’ll be going to and travel there, you’ll also have some dialog and proceed to perform a Mind Scan. 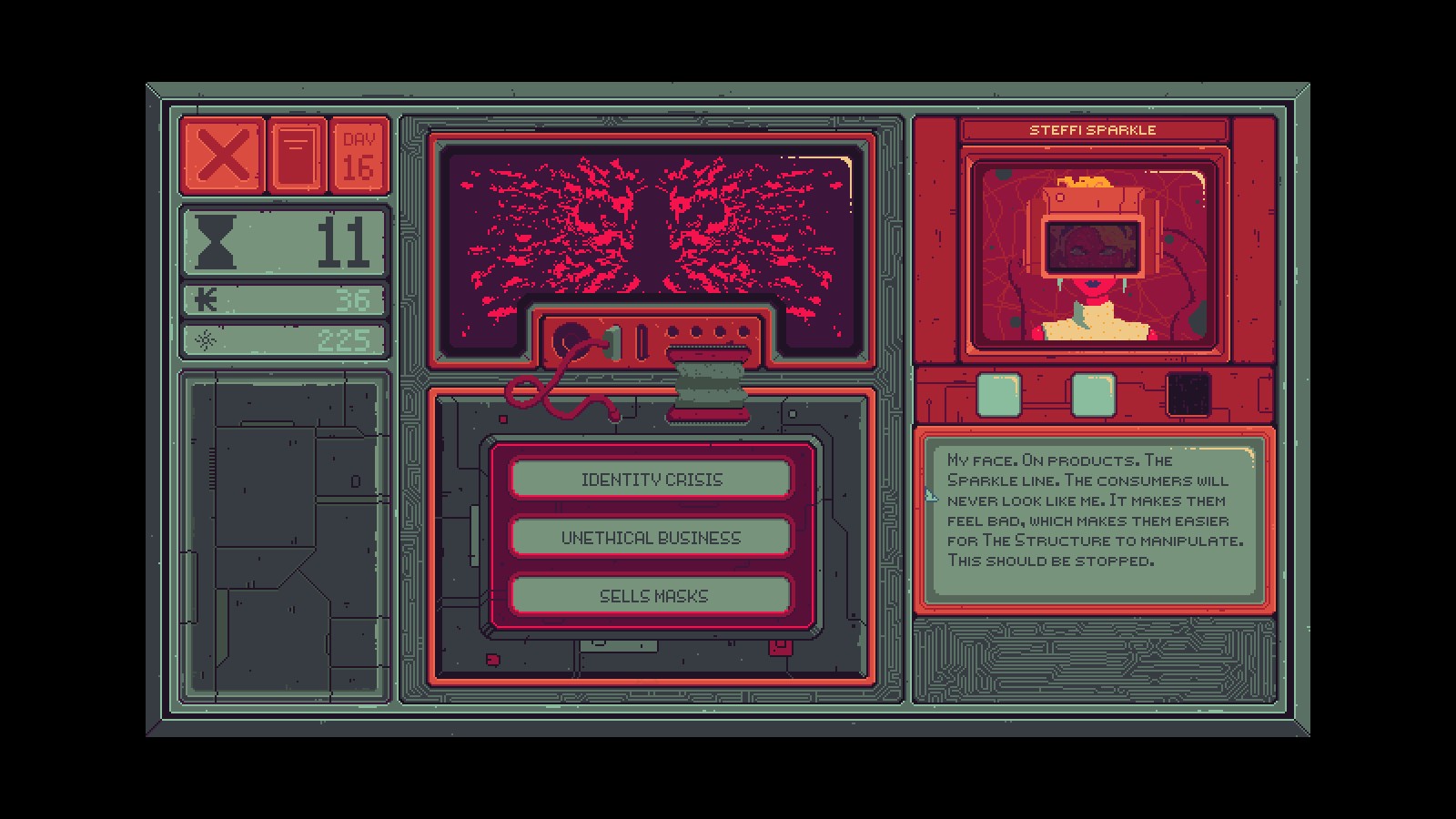 Mind Scan is probably misleading, but you’ll basically put this headset on them and they’ll get a Rorschach test where they’ll tell you what they see on the screen. This is often lengthy and you’ll have to interpret what it might mean out of three options. Some will have you questioning between two options, but some are obvious. It might even help remembering why you’re here in the first place as the little blurb you get gives you some insight on them. However, if you interpret it wrong, it will cause you to lose time as you will need to answer more questions. For example, there is someone that is a very popular hairstylist, but she is recently losing her customers. Once you arrive, she’s upset that her customers stopped coming and seemingly called for a Mind Scanner, but she’s also strangely looking at her finger. And doing a Mind Scan confirms her customers leaving and being angry, but it also shows that she started using tools other than what a hairstylist would normally use and have been cutting more than hair if she feels its off balance. Which definitely explains why she’s looking at her finger. After the Mind Scan is complete, you’ll get some text explaining more of the diagnosis and you can pick if you find them insane or sane. This decision is up to what you think is best, but declaring them as sane will put them on their way with you getting a small Kapok (the currency here) fee, while classifying them as insane will require you to treat them (and give you more Kapok at the end).

If you classified them as insane, you’ll have to treat them for the condition they have by removing their insanity symptoms. There are six different insanity types that you’ll have to deal with. You do have a device that can target all of them, but it gets… a little broken after the first day. You can, however, craft devices that specifically aim for one insanity type and even chain three at the same time. Crafting them will require time and science points (which seem to be given as you do treatments), but it’s worth it. There will be at most three insanity symptoms, but the amount you’ll need to remove increases. Each device have their own little mini-games ranging from easy and quick to difficult and slow. Like a morse-code like device where you aim to replay the same noise sequence or one you have to slowly turn a knob to avoid putting stress onto your patient. Getting an input wrong will also stress out your patient and it getting too high will cause treatment to close before the day ends. Considering you can chain remove them, it may be best to chain the ones that take the longest.

Later on, some patients will have instabilities that will make things harder like symptoms being frozen and needing to melt completely before removing, electrocuting your device afterwards, or will explode after a while. 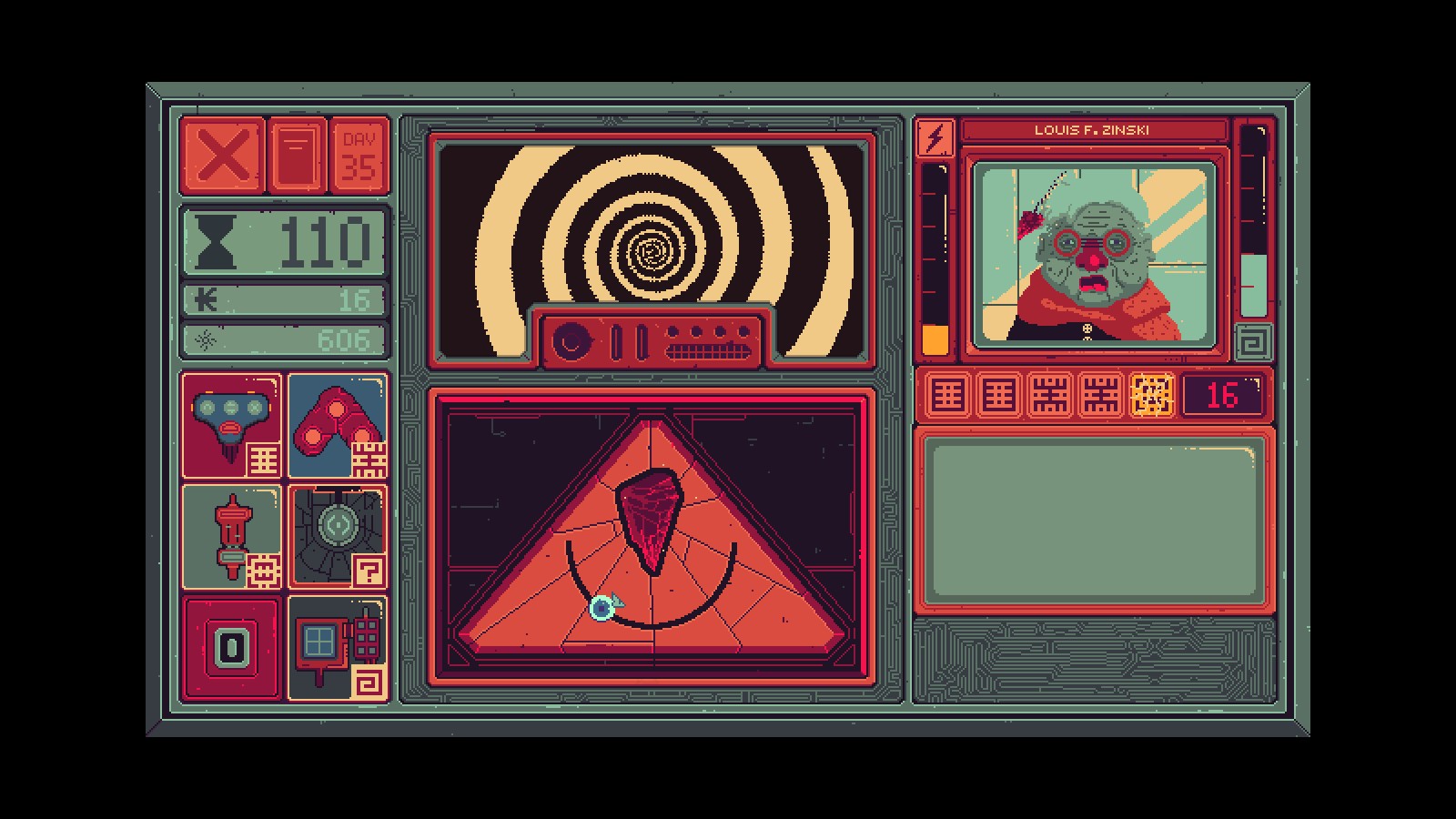 There are also other devices you can use that don’t treat symptoms, but will help out in other ways. Like a de-stressor or one that returns personality as each successful treatment will take a point of personality away. And once it’s all gone, it can’t be brought back. So treat your patients well (or don’t). Though, I will have to say that my favorite has to be the Hypnamid which will stop time when you hypnotize your patient for a short while, which is mainly since the pills you can buy to help you out will pause along with it (and I found out you can have two Hypnamid uses with one pill if you time it right).

Once treatment is completed, you’ll be paid and see what the treatment did, which will determine if they needed it (which most seem like they do) and if you treated them with care so they kept their personality. You might be tempted to just not care, especially in late game where it takes multiple days to fully treat them, but the next day you’ll get letters or calls from them or people they know on how they’re doing and if they or people around them are satisfied. Taking away personality will really hit you as their loved ones shame you. While treating them with care will even give you bonuses like extra time, more money, or just that warm feeling of doing a good job. Just keep an eye on how much time you’re taking as running out of Kapok to pay your fees at the end of the day will cause a game over. 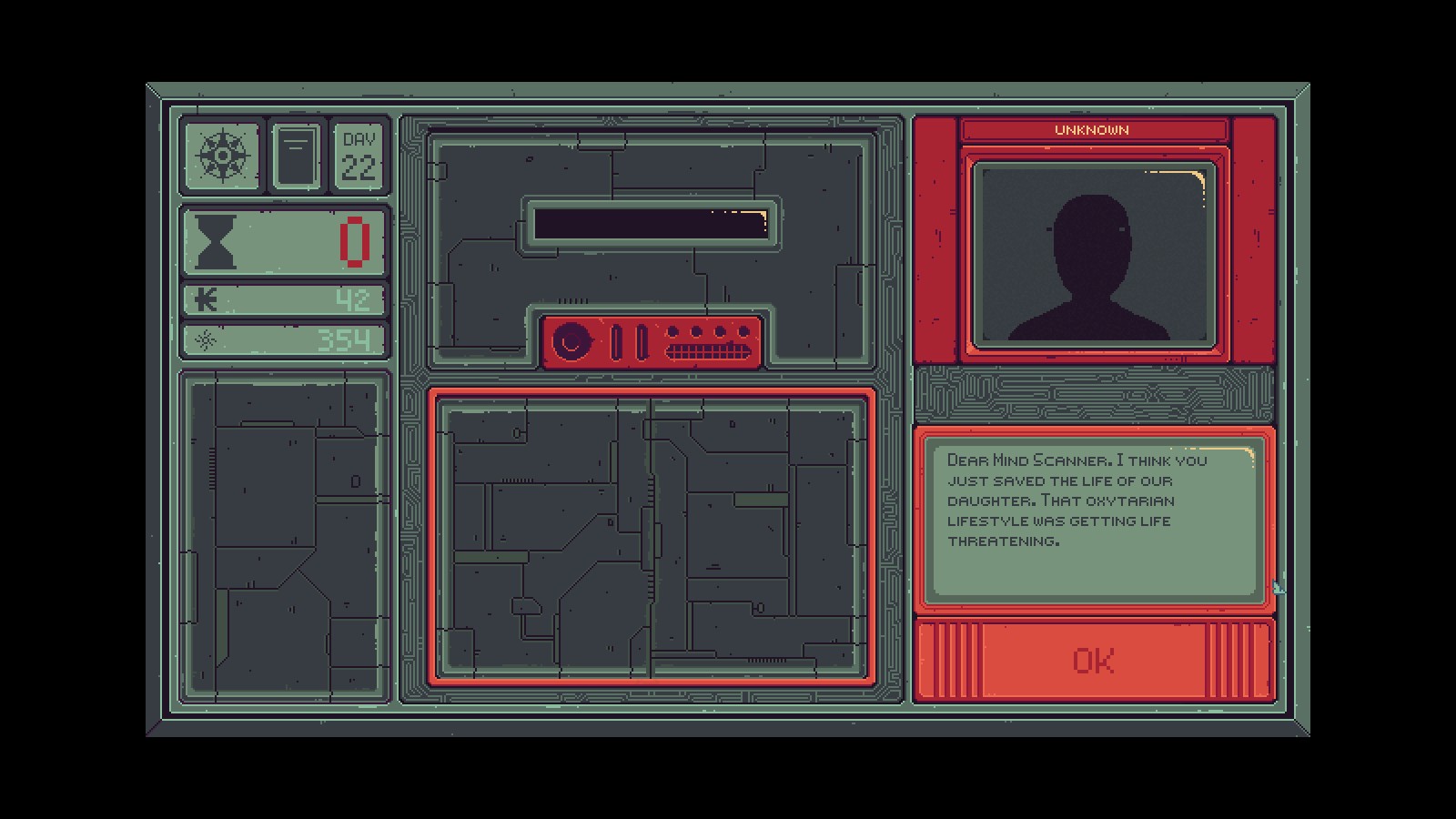 What’s great here is that each character you’ll come across, which happens to be randomized so someone might not pop up in one playthrough or even show up earlier, are all unique. They all have their own problems and personality, heck even when you take away their personality they’re still unique. So it might be interesting to even see how they are without personality (and have them keep their personality in a different playthrough). Some may even take extra steps to start the Mind Scan, like giving them some more time, and give you an opportunity to lower their stress.

Though, I do wish you were able to try out a new device when you craft it. You do get an entry in your handbook with what it does and how you’ll use it, but nothing beats hand on experience. Some devices you can get the hang of quickly, but some are difficult to figure out (even the main treatment devices, though those come easily eventually since you use them a lot) and it can waste a lot of time while you’re trying to figure it out. Or even discourage you from using new devices which may have become a lot of help. 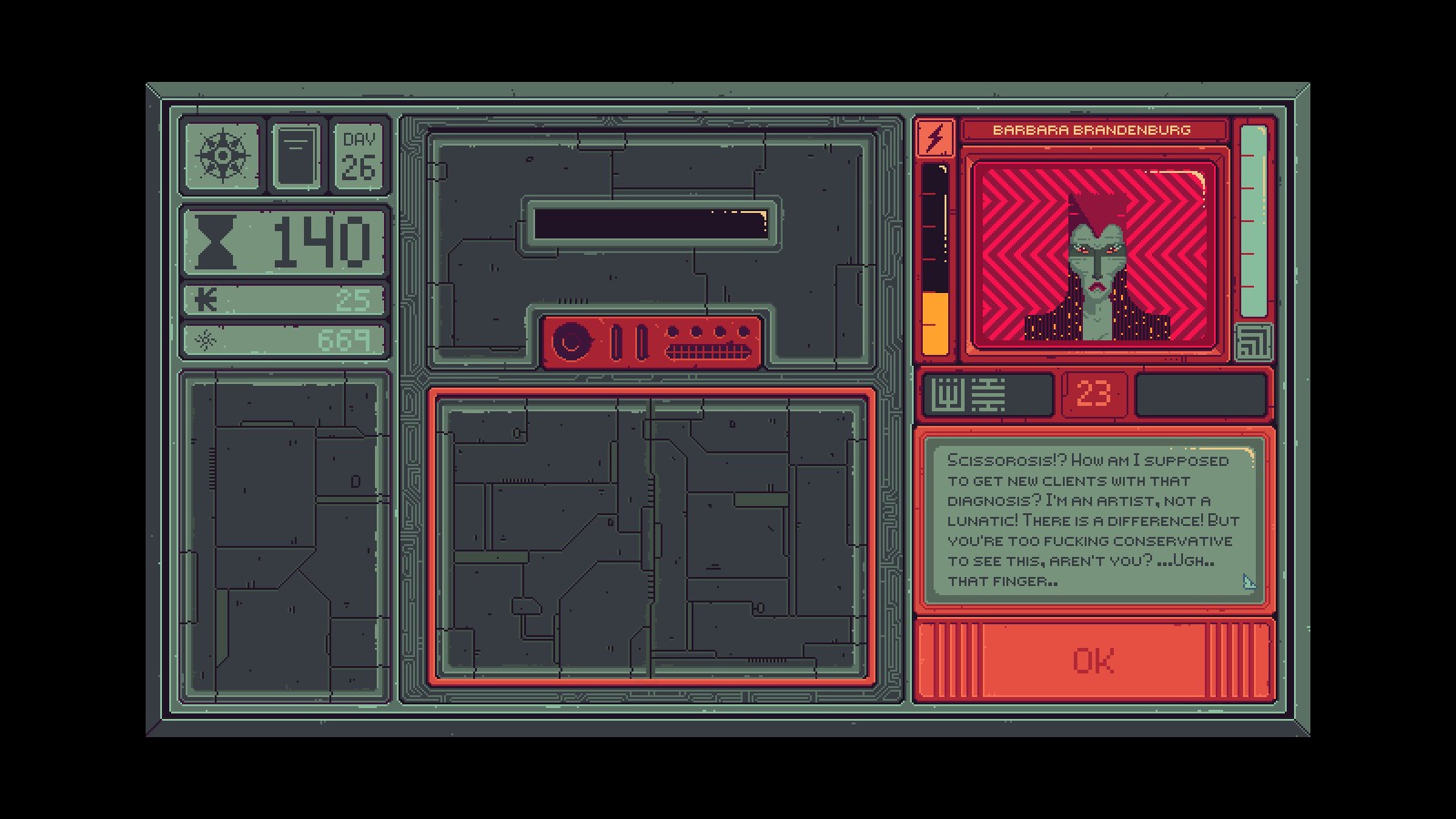 Mind Scanners does have multiple difficulties, just don’t skip the intro cutscene that starts of ants unless you want the default Normal mode (there is an upcoming fix that will not make this easily skippable). At first, it doesn’t seem like much is different, but it does make some little changes that build up. And well, it’ll build up more depending on the play style you chose. The amount of maintenance you have to pay changes, the amount of symptom types will increase, it’ll cost you a bit more to craft devices, and it will take you longer to travel as well as the penalty for getting an interpretation wrong increases. It will also get harder if you aim to treat your patients with care so they keep their personality or not. Being on Hard is definitely hard still, I barely had enough time most of the time and I was a day away from failing due to not having enough Kapok, but going for a all insane, personality gone if it’s gone run helped me have a less stressful time (plus it got me to a new ending). And while I’m not that far into my Easy mode playthrough, it does feel easier so far.

There are 10 different endings (well 9 if you don’t count the game over one where you run out of Kapok) and both of the playthroughs I did (on Normal and Hard difficulty) each took about 5 hours. The ending you’ll get depends on if you side with The Structure or with Moonrise and than the last choice (or last couple) will determine your ending. 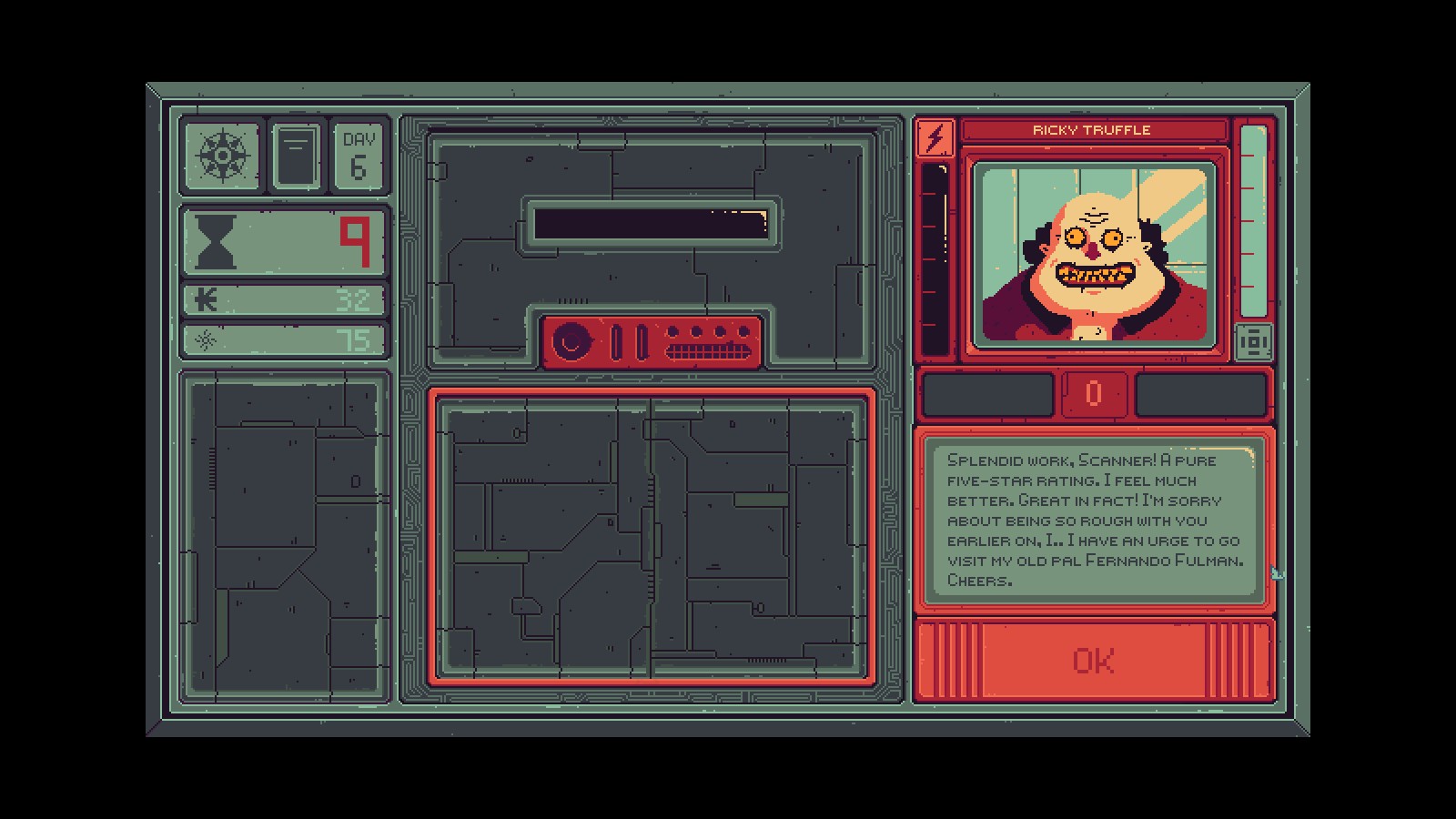 I’m someone that is reluctant at comparing games, especially since I’m someone that gets annoyed at that as well, unless it gives me a heavily reminds me of it and Mind Scanners really does remind me of Papers, Please. Especially after playing it. Though, I mainly came in after seeing the mini-game like treatments that you get to do and I love this game for it. The story here is fine, but really I stayed for the mini-games, the art direction, and the music that really matches the whole oppressive vibe that bares on everyone in The Structure.

Though, your enjoyment of Mind Scanners will heavily depend on if you do like time management and the mini-games that you’ll constantly be doing. As well as if you’ll get frustrated that you won’t be able to try the devices out before treating a patient (personally, I was fine with it and you can easily rewind the day). You won’t really find the story here as deep as you probably would like, but it still serves its purpose.