Scarlet Hood and the Wicked Wood (from now on SH) is a modern retelling of The classic novel the Wonderful Wizard of Oz. It’s a delightful point and click game with a significant number of puzzles. The visual and audio design, the writing and a solid gameplay make of SH an excellent product I would recommend to anyone patient enough to take notes, without hesitation.

The charming and energetic protagonist, Scarlet is a rising star of the music industry and part of a band with her male friends. As they approach with their van what could be the performance of their lifetime, and possibly grant them a contract, there is a risk of rain and cyclone. The concert is so well received that the blonde Kentucky girl peaks a producer’s interest and is called to discuss their career in private. The news, however, is not all positive and now Scarlet is facing a tough choice between her future and her friendships.

Unfortunately she’s not very good at making decisions or lying and isn’t able to hide that she wasn’t able to straight up refuse the sweet offer. This results in the group breaking apart and in a silent, tense trip back. She also ends up being left alone in the middle of the highway, during a weather emergency: and just like with Dorothy, a magical cyclone surprises and transports her to a land far away.

When she wakes up she meets an adorable fox who’ll be her guide in this new reality she’s now stuck in. Apparently she fell from the sky, damaging a wagon and ended up trapped in a cave with the animal and a Munchkin boy. More so, to the latter she looks like a witch, thing that to her own surprise is confirmed soon enough.
And so with her incomplete Witch Regalia – a headdress in the form of an adorable red hood, her Womping Stick and just one of her ruby heels – she’s able to start her adventure in this crazy world.

As a powerful witch and wagon destroyer she’ll now escort the Munchkin entourage to the royal coronation. First however, they’ll have to cross the forest, claimed by the nefarious Black Witch as her territory. Thanks to a hex cast by the previous witch, Scarlet has a chance to overcome all the difficulties. Each time her life would have ended, she instead just wakes up again and again, each time having an opportunity to undermine her nemesis’ attempts at crushing her.

Scarlet goes by her day by wandering around the forest around the trail. While she explores she also uncovers more about the witches and weird critters like dodos and flying monkeys. Through the notes scattered around the world the player can read more about the environment and get some important tips. Each section has two possible ways to solve it – either by helping out one of the three allies that will come to the girl’s rescue, or by completing a main task.

All will lead to a final duel against the Black Witch, however, the ending details will depend on the choices made throughout the journey. With the truth out of the bag, Scarlet will now return to her world and face it with a renewed resolution. But remember, ain’t rest for the weary! 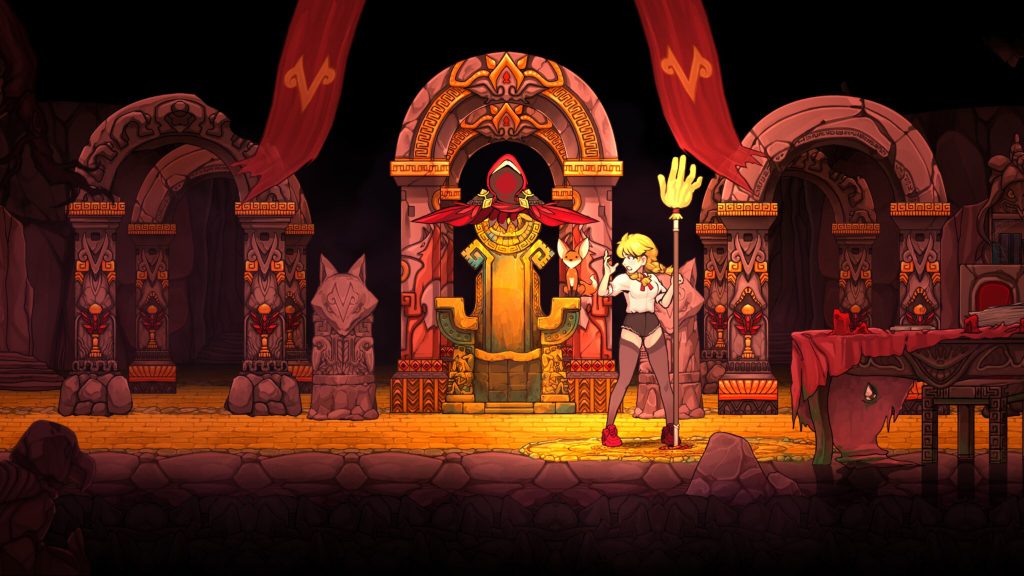 This is a classic point and click game with puzzles, comparable in quality and variety to big and successful titles like Deponia. SH follows the classic formula of finding items that will help the protagonist solve problems, mixed with brain-teasers.
For those a notebook will be needed! The clues are often scattered throughout a scene and the game also offers more complex riddles. There is a lot of different kinds of puzzles that, even if sometimes repurposed twice or thrice, will still feel fresh. I really liked all the different ways to open the doors, those were the most entertaining puzzles for me.

It’s not all fun and games though, the map is filled with enemies that have either to be avoided or womped with magic. Scarlet has a lifepool of five hearts, those can be restored using food that can be either gathered or bought from the merchant.
She can hold up to six consumables at a time, which feels just right. All the herbs have different effects, like removing the poison shot by monkeys’ blowguns, or allowing a faster stamina regeneration.
Magic power is regenerated through crystals, but there aren’t a lot of them on the map, perhaps because the Womping Stick can be also used to discover secrets. The key items’ inventory can’t be accessed directly, as the items are used automatically in their assigned interactions.

Surprisingly enough there are also a few action sequences, as Scarlet is being chased by the Brer Wolf whose only intent is to kill. The player will have to run from the beast and hide, by turning into a totem, when possible.

The player can also use a map that charts all of its segments, significant locations as well as Scarlet’s current whereabouts. The map though doesn’t show any other details and the player might want to, once again, use a notebook. 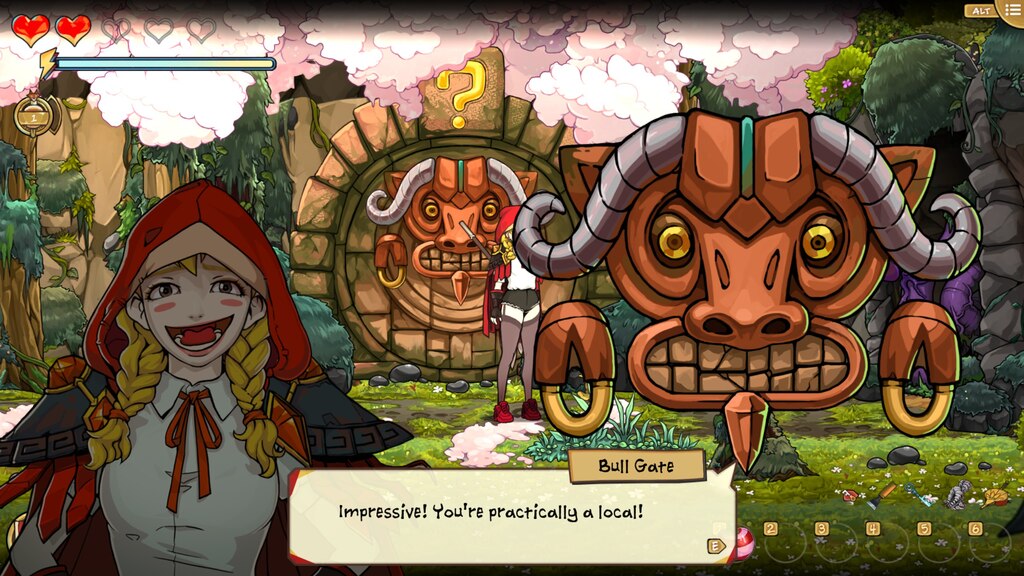 Everything in this game is extremely pleasing to look at. The character design is gorgeous, colorful and full of life. The dialogue portraits are full of emotion and gestures, they feel like they’ve all been drawn fully from scratch. What I loved the most were the sparkles of excitement in the eyes of the characters when they were excited. The backgrounds are pretty and fit in beautifully. Some animations don’t seem that refined, but it’s not a problem since they’re all smooth. The dodge movement though is exceptional: it’s full of movement and the swirling of the cape is mesmerizing.
The “bonus” gallery contains some beautiful illustrations and pictures of a model in the Scarlet’s costume that the developers built for one of the trailers.

The sound effects and track work really well and are carefully built, too; the menu music in particular is a lounge old-timey feeling melody that will easily charge the player with energy, the little jumps of the Brer Fox is accompanied by a joyful and soft sound.
Although not all interactions are voiced, when they are it is done beautifully. The dialogues sound like a real conversation and the player might not even realize that the only voice they’ll hear is the talented Hillary Hawkins, borrowing her amazing southern accent to Scarlet. 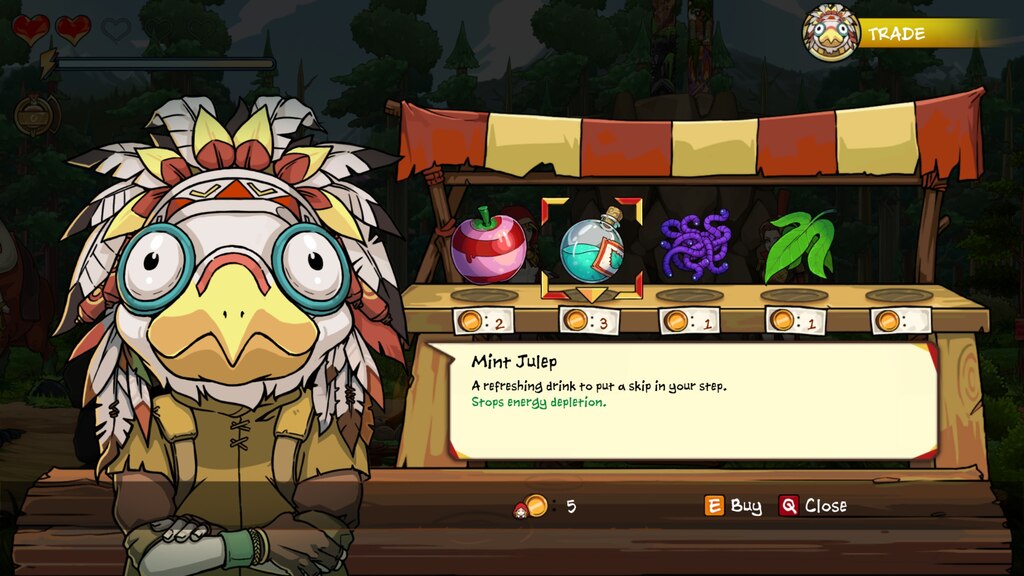 I’ve had the game crashing during loading screens, but a new patch should have fixed this bug. That was the only issue I encountered during my experience with SH.

This is a game I would suggest to anyone interested in the genre, puzzles or even its charming design. It is beautiful, fun, the riddles are well-made and satisfying, the narrative is surprising and engaging. It introduces new mechanics to this genre, without distancing itself from the original. I consider this one of the point and click games I’ve ever played.

Playing SH for the first time should take a minimum of around four hours, depending on the player’s ability. However, it is worth being replayed at least once to get a desired ending and search for things the player might have missed previously. Considering the quality of the game, the full price is a good deal.