Starpoint Gemini 3 ultimately proves to be a disappointing sequel for the franchise. Most iconic and loved gameplay elements have been butchered or removed, while the novelties prove to be mediocre or outright bad additions. Disastrous character-building and boring story complete the picture. An unfortunate chapter of an otherwise brilliant series.

Starpoint Gemini 3 (SPG3) is a space-sim set in a far future, where human colonization has expanded beyond the Sol system thanks to Starpoints: massive portals enabling faster than light travel. In this fourth installment, players impersonate Jonathan Bold, a scoundrel with excellent piloting skills but little common sense, which has to run for his life after a huge bounty is placed on his head.

1. Overall solid visuals, with particular focus on celestial bodies.
The visual rendition of the various systems doesn’t disappoint by today’s standards. Excellent light effects and huge quantities of debris and wreckages, litter the vicinity of major stations and planets, while expansive asteroid fields and space anomalies shine in the distance. Ship models and effects are also of good quality, thus making fights and action more immersive.

2. Enjoyable combat system.
This sequel proposes a more hands-on approach to combat, oriented towards dogfighting and maneuvering faster, smaller ships rather than massive dreadnoughts. The system holds up well, and makes each encounter fast-paced, heavily centered on the pilot’s skill rather than equipment levels – dodging, kiting enemies, using consumables at the right time and retreating to regain strength are its foundations.

3. Good variety of activities to perform.
From standard missions given by bartenders, which involve target defense, repair or simple cleanup of marked targets – to more peaceful lines of work like mining or wreckage scavenging, there is quite a lot to do around the three available systems. Hidden blueprints are scattered throughout space, finding them unlocks new Crafting recipes, while rare capital wreckages or particularly profitable ore fields wait to be found. 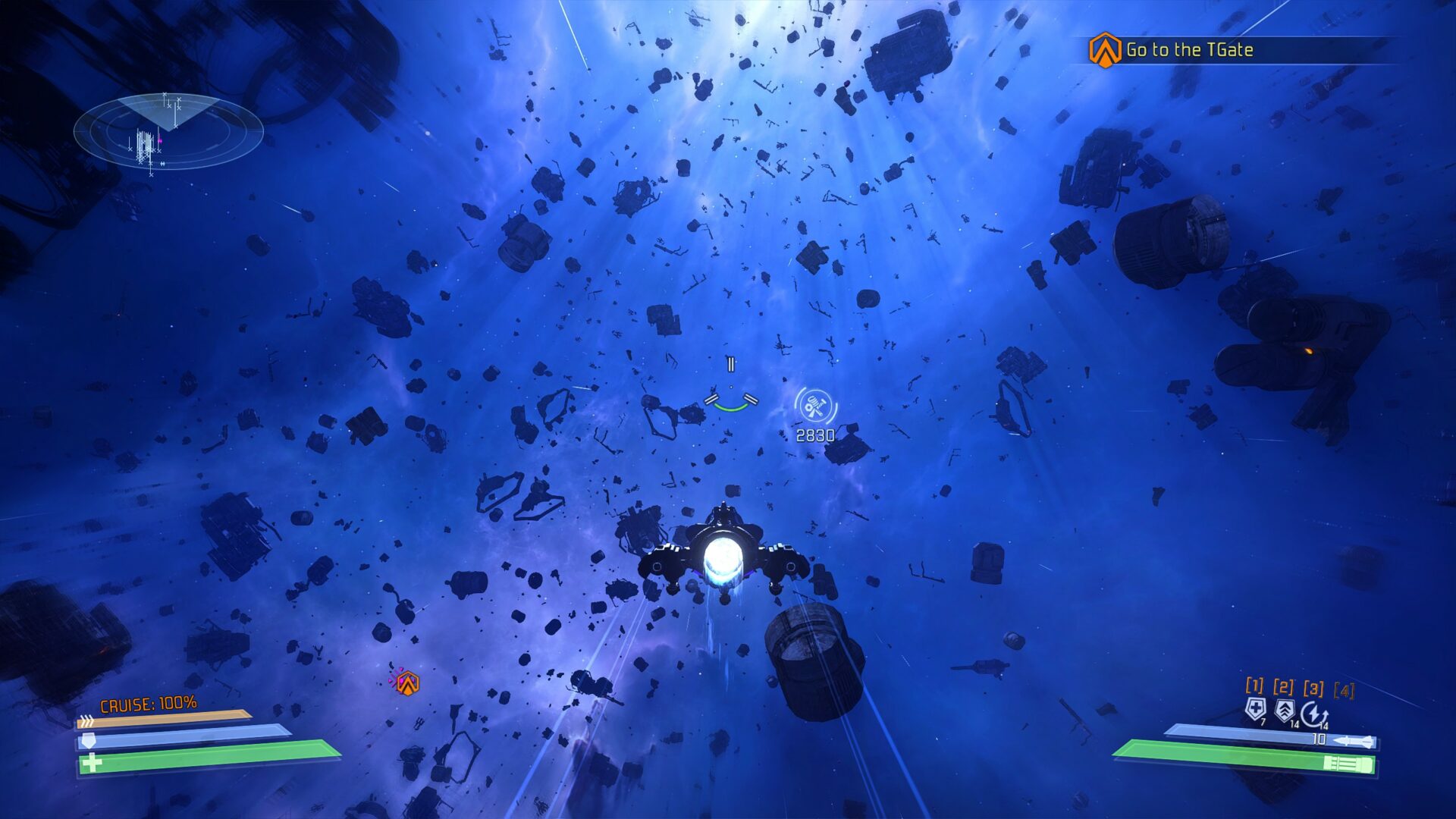 1. Low effective variety of weapons, gear and consumables.
Even if on paper there is a good diversity of ship modules, weapons and consumables to buy and use, at the end of the day there is little difference between then except for statistics. A machinegun and a cannon for instance, will not feel much different to use at all, except for the rate of fire and energy consumption. Same goes for consumables like mines or deployable drones, which only vary in damage types or stats, but feel and work all the same way.

2. Inconsistent challenge level, with evident balance flaws.
Some early encounters have been very challenging, while similar others later on against supposedly more expert forces did not deliver the same difficulty. Certain missions in the main quest involving target defense are borderline impossible on higher difficulties, due to balance mishaps in target health and number of enemies. Missions are always categorized as “Easy” level, though some of them feature potent enemies, while others are simple seemingly at random.

3. Hideous drone piloting sections.
Certain sections will have Bold pilot a deployable drone inside ships or facilities. Combat against defenses is a basic exchange of hits without depth, while looting containers laying around gives miserable rewards. Stealth sections are worse, with unreliable detection meters and visual cones of enemies, which make them a frustrating, luck-based mess.

4. Cringe-worthy generic protagonist, mediocre story.
Bold is a badly written, generic character without any growth or uniqueness to himself across the story. His scoundrel-like, reckless behavior is more suited to a 10 years old kid than a seasoned mercenary, with puns and lines that simply ooze cringe. The writers tried to make a character akin to Ian Solo, failed SPECTACULARLY and delivered a mess. The story itself is nothing special as well, encompassed by forgettable characters and mediocre writing.

5. No truly unique side missions or activities.
There are no unique NPC that give special assignments, ever. All side quests are randomly generated assignments given by bartenders, and have about five variations which always play out in the same exact way: go to point A, clear all enemies, press action button, done. Needles to say, it becomes a drag, especially considering the rewards of such missions are often miserable compared to the prices of equipment.

6. Useless crafting system.
Crafting is, at no point, even remotely useful or worth making an effort to utilize. Based on random collectible blueprints, it enables making weapons and equipment from scratch, provided the correct materials are acquired or crafted in turn. The problem is that the time required to find, fetch and assemble all the materials can be better spent doing quests instead as the profit for crafting instead of buying is marginal, the time consumed huge. 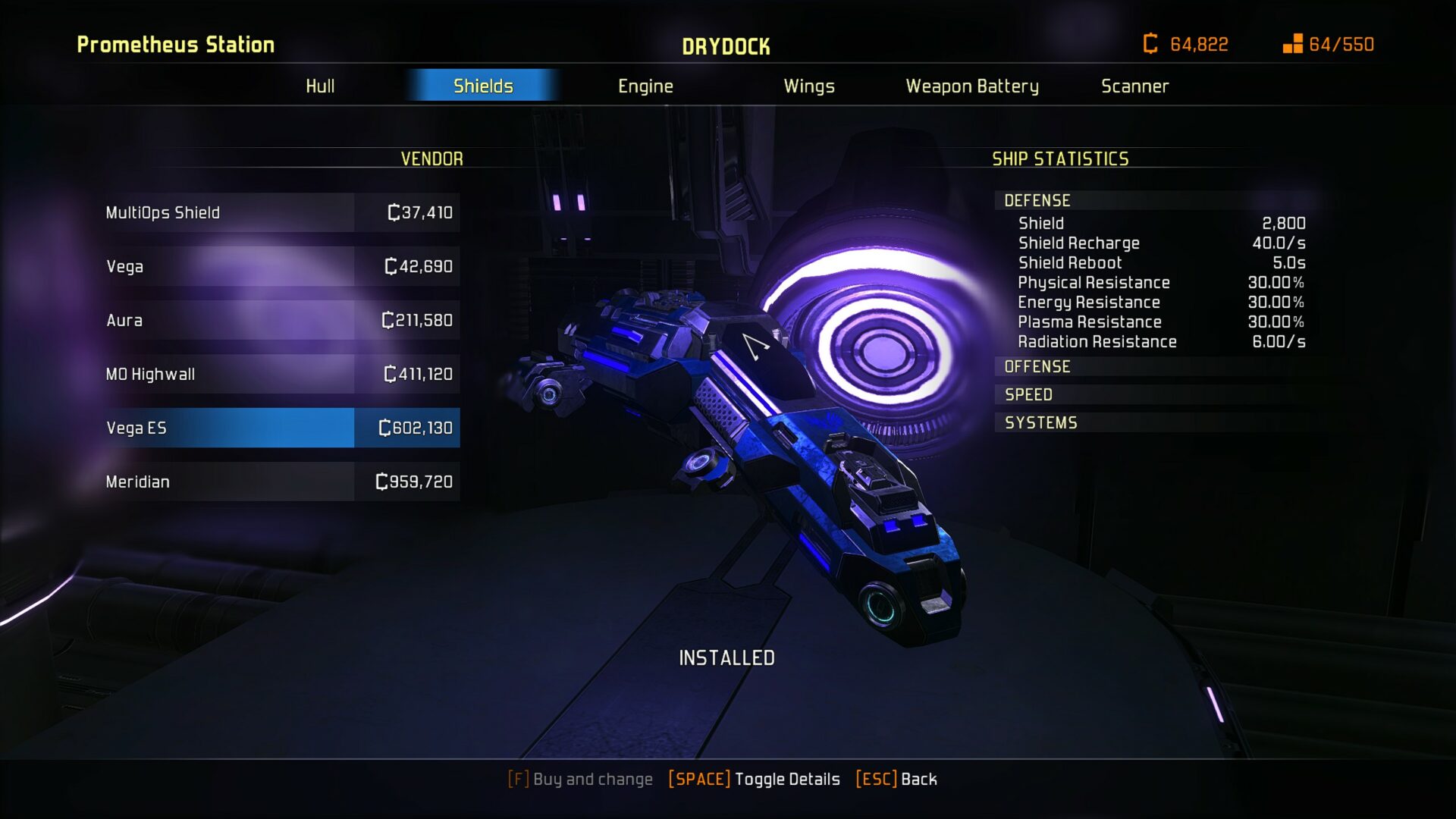 Exploration
Is performed with Bold’s ship, using either normal speed or Cruise mode for much faster travel. All relevant points of interest like mining fields or stations are already mapped, so exploration for the sake of discovery is not much present. Starpoints and T-Gates allow traveling between planets and solar systems at no cost. Most stations can be docked to buy new gear, consumables and repair the ship for free, each having a different inventory.

Combat
Plays out as a fast-paced dogfight, with most enemies being fighters or anyway small ships, though at times also cruisers and larger ones will be present. All weapons have diverse damage types which don’t matter much: going for the highest DPS is what matters in the end – missiles and deployable accessories like mines can also be used. Weapons use energy to fire, which slowly recharges with time, so they can’t really be spammed, missiles instead use ammo. Bigger ships have weakspots that if destroyed inflict massive damage, though have no other effect, while smaller ships can be crippled with a variety of maluses derived from passive skills, gained through XP gained.

Ship Management
Is done at stations. Bold’s ship can be refitted with better guns, shields, engines… and so on. Putting a new one will forcibly sell the old one, though not nearly at full cost. Most expensive guns and shields are straight upgrades so there isn’t really any deep building or choosing. In the end, it’s quite a grind to get the endgame-tier components that one will definitely NEED for Hard and above difficulties. 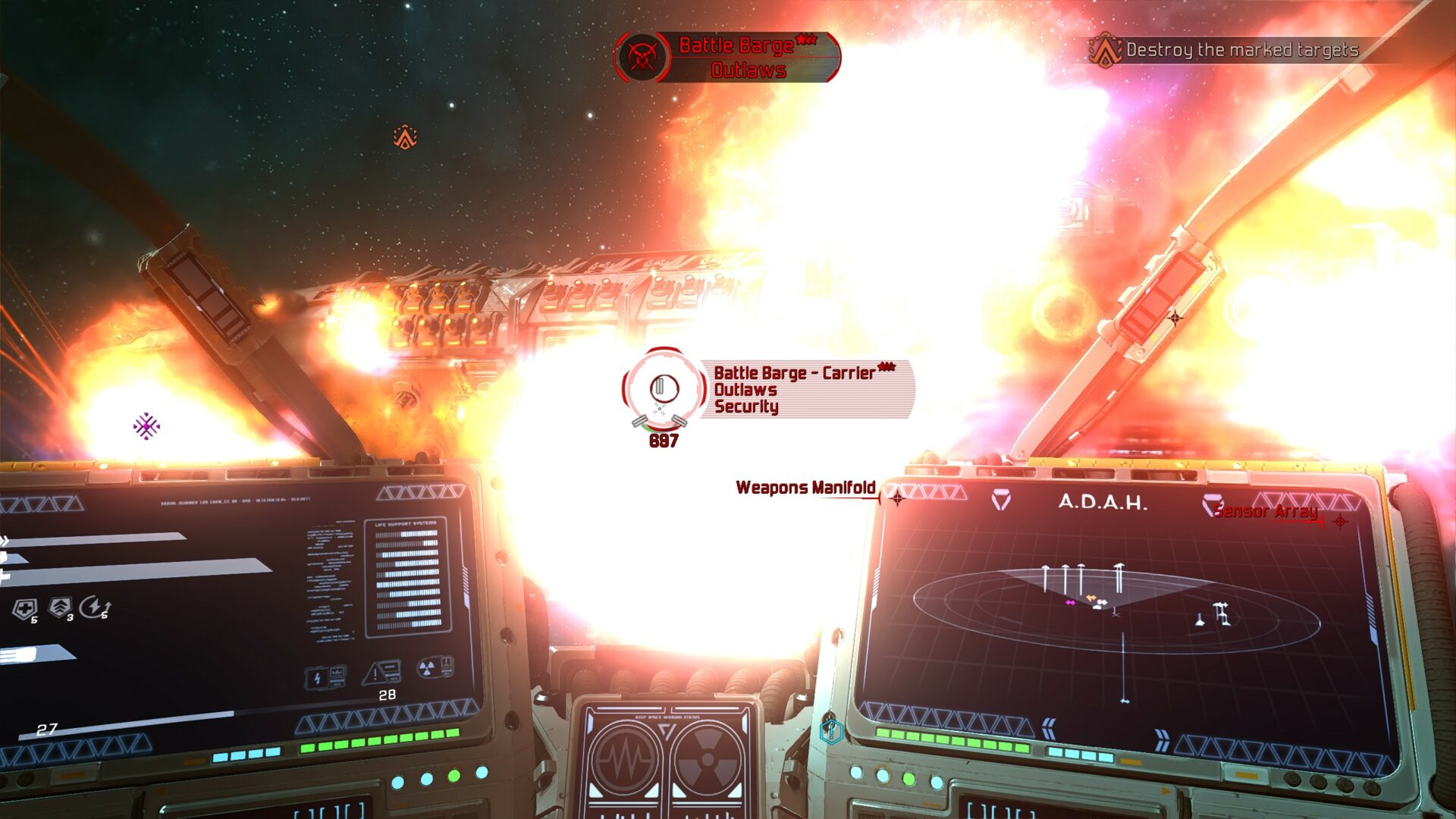 – Certain side mission types can permanently break.
– Players may get softlocked in certain conditions.
– Enemy AI can become unresponsive in combat.

It took me around 30 hours to complete SPG3 on Hard, while also clearing all bosses and getting the best ship gear. Even if the content is in line with price, the high number of flaws prevent me from recommending this game.