Guerrilla Games delivers a superb open world action adventure with exceptional levels of polishing, great content variety and masterfully designed mechanics. Despite a rocky launch plagued by technical issues, Horizon Zero Dawn is now in the best shape it’s ever been, as this PC ports delivers the ultimate experience.

Horizon Zero Dawn (HZD) is an open-world action-adventure game with a post apocalyptic setting. After a great catastrophe, humanity was nearly wiped out and regressed to a primitive state, as nations have been replaced by warring tribes and kingdoms. Survivors dwell among the ruins of ancient times, populated by animal-like machines that threaten human life daily. Players impersonate Aloy, a tribe outcast fostered by Rost, who found and cared for her since infancy. A series of events forces her to embark on a quest of legendary proportions, destined to change the world.

The Apocalypse never was more beautiful
Visually and more importantly artistically, HZD is an absolute masterpiece. Aside from the incredibly detailed graphics, spectacular vistas and scrumptious light effects, the art direction behind each NPC, machine and environment is truly one of the best I’ve ever seen in 22 years of gaming. The care and research behind each animation, location, animal, plant and just about anything else is phenomenal. The world always feels vibrant, alive thanks to dynamic weather and independent NPCs going about their business as time passes.

Thrill of the Hunt
This game emphasizes like no other the concepts of preparation and knowing one’s enemy. Each adversary, be it machine or human, has different attack patterns and weaknesses to exploit – that may as well change as the battle progresses. Resource gathering and crafting play a vital role in Aloy’s journey against more and more dangerous foes: picking her fights wisely and using the correct tool for the job among the many available will be key to victory. Skill and preparation are equally rewarded in a combat system that always feels challenging and satisfactory.

Everything has a meaning
HZD offers a large amount of side-quests, collectibles and challenges around the world for Aloy to complete and in turn become stronger, thanks to generous XP and item rewards. Not only that, but such missions often unlock unique weapons, gear pieces or other quests, while even collectibles offer special rewards if entire “sets” of them are found in the world. Certain missions may even influence the endgame parts, as some secondary characters may ally or abandon Aloy depending on her actions. Every single side activity is worth doing, varied and rewarding.

The complete journey
This PC port of HZD includes all DLC ever released, as well as the Frozen Wilds expansion which offers much greater challenge, and the Ultra Hard difficulty setting for NG and NG+ modes – which brings a masochistic level of brutality. Along with visual improvements compared to console, this is really the best version of this title one could possibly hope to play. Porting issues have been fixed since release, and the game runs brilliantly now. 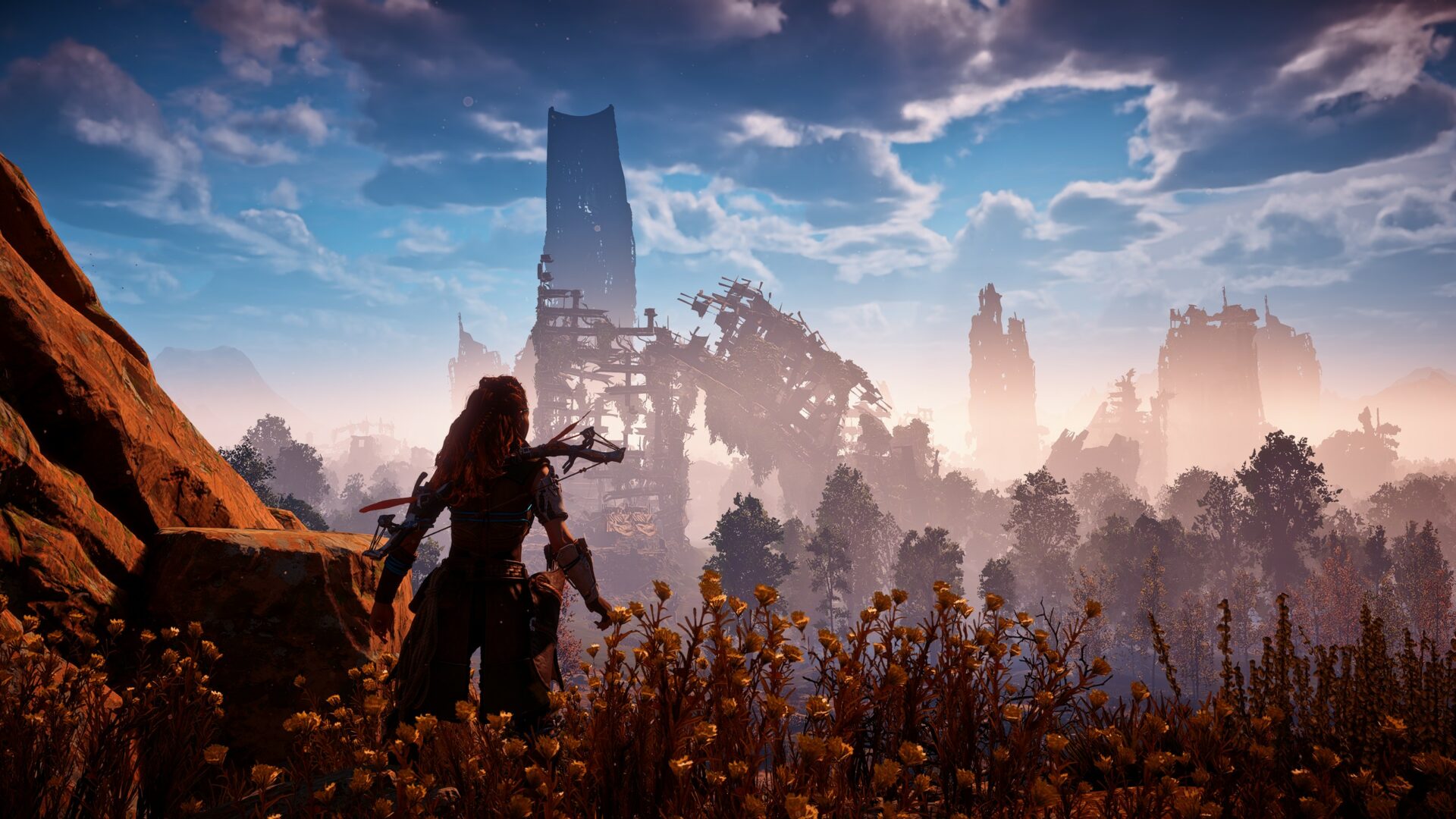 404: bad sides not found
I couldn’t think of any bad sides worth mentioning for HZD. That’s the first time in 10 years of writing reviews this has ever happened. Any flaw the game has is at worst minor and is not nearly severe enough to mention as a standalone issue. Well played Guerrilla Games, well played indeed. 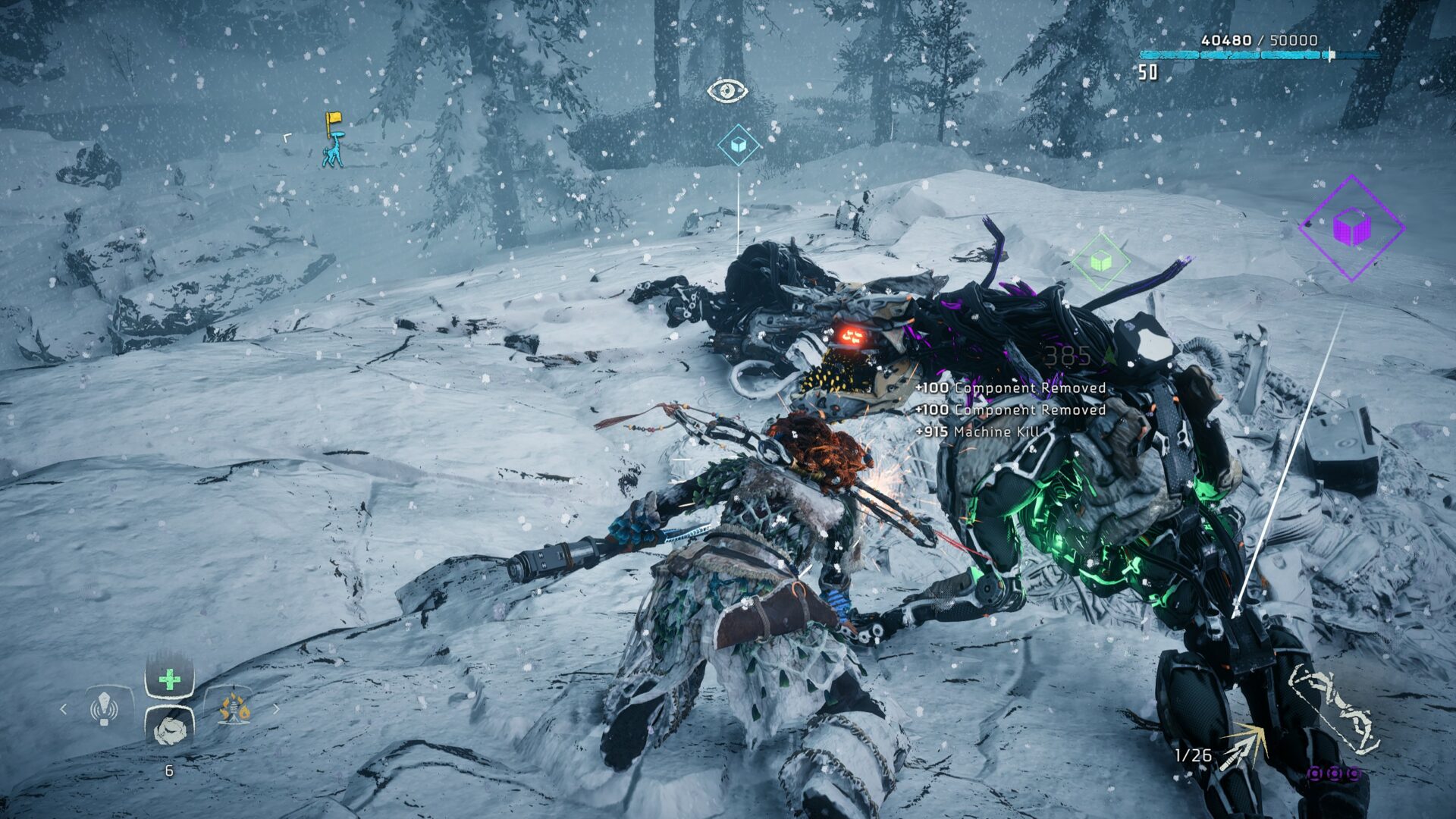 Exploration
Is initially performed on foot, while later on also by mounting certain machine types once able to do so. The world is immense, but thankfully dotted with Campfires acting as fast-travel points, that however costs Travel Packs to enable – more based on larger distances. While initially limited, the map becomes soon fully explorable, with each biome housing diverse machines, some far too dangerous initially. Quests, collectibles, challenges and lore entries are scattered evenly throughout, making exploration of each corner rewarding and interesting. New quests and important locations are automatically highlighted once found, as well.

Combat
Is the core of HZD’s gameplay, and is based mainly on knowing each machine’s attack pattern, capabilities and weaknesses to succeed. Timing dodge-rolls well, laying out traps before starting a fight, and having a steady aim are equally important factors in surviving attacks that, on high difficulties, may very well one-shot Aloy in some cases. Machine enemies are highly adaptable and change their attack style based on damage they sustain: removing an enemy’s ranged weapon may provoke it to use new attack strategies not seen before, for example. This brilliant system makes combat unpredictable and interesting.

Elemental damage resistances and weaknesses, along with unique weakpoints such as ranged weapons, that can be detached and used against Aloy’s enemies, all come into play depending on the enemy faced. A wide array of tools ranging from bows to technologically advanced bolt-casters opens up to plenty of approaches, while skill tree evolution goes a long way from start to end of the adventure. Enemy variants with even more deadly skills sum to the normal counterparts in due time, making combat all the more varied.

Quests
Ranged from the ordinary fetch task to more exotic ones such as Hunter Challenges or uniquely crafted missions with standalone parameters. Between challenges, regular quests and collectible-related tasks, there is really a whole lot to do, and it’s interesting each time. Each quest is always indicated on the map, but in some cases a wide are is displayed and is up to player to think over how to progress. In the case of collectibles only the general area is hinted at, while the location remains hidden. Lore entries such as diaries and audio logs are instead completely hidden, and quite hard to find.

Character Management
Can be performed on the fly at any moment, even in combat. Materials gathered from slain machines, hunted animals, herbs or containers all come into play in keeping Aloy stocked with munitions, potions and other supplies. Crafting is a regular task, and more exotic ammunition types will incur into higher expenses to make. Picking fights wisely, looting everything and selling unnecessary surplus are all key to not run out of materials. Commerce is also critical especially later on, as materials found in the wild won’t suffice anymore compared to the needs.

Modding weapons and armor can make them much more powerful, while mods can adapt to a particular purpose or damage type: one can choose between a stronger but slower weapon, or favor DPS over raw damage, all depends on the mod configuration. It took me around 60 hours to complete the main story, Frozen Wilds DLC and all side activities everywhere on Very Hard difficulty. For the price of 50€ and exceptional quality, I can recommend buying this game for full price.