Gather up your friends, it’s time to chop them up with the most overpowered boomerangs in you’ll see in a video game!

Party games are those rares games that always manage to bring something new to the table even when you think you’ve seen it all. Boomerang Fu is no exception and it’s one of the most fun party games I played recently – the only problem I can really point out to those wondering is the lack of Online support – while you can use Steam’s (or Parsec) Remote Play Feature (which I did for the purposes of this review), the game only formally supports Local Co-Op so unless you have a really solid connection for Remote Play or you can play with friends locally with ease, Boomerang Fu has to be a hard pass; otherwise, it’s a no-brainer. 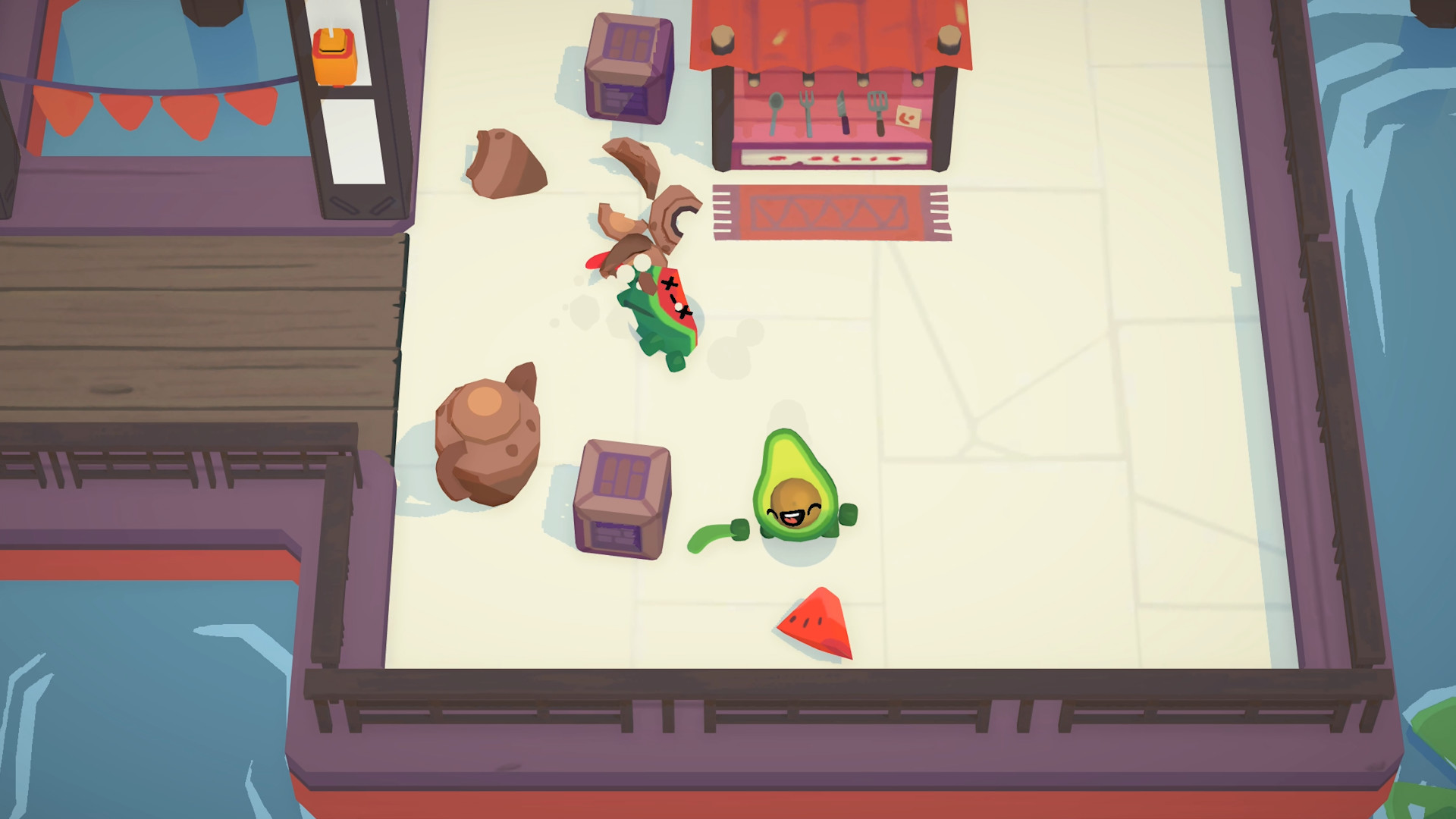 – Slash them in half?

– Throw that sick Hail Mary shot across the map that everyone will scream in excitement?

The choice is yours! You can melee enemies to death (unless it’s blocked or a shield protects them, it’s always a one shot) or kill them by throwing the Boomerang (also a one shot). The Boomerang curves and returns to you but can also bounce off objects to re-route for a so called “Bank Shot” on the enemy, leading to their demise. The best part of the game is how the physics based gameplay of the boomerang, both its curvature and its bounciness are predictable yet deadly, allowing both you to predict shots accurately and the enemy to dodge them as well, becoming a very skill dependent game. 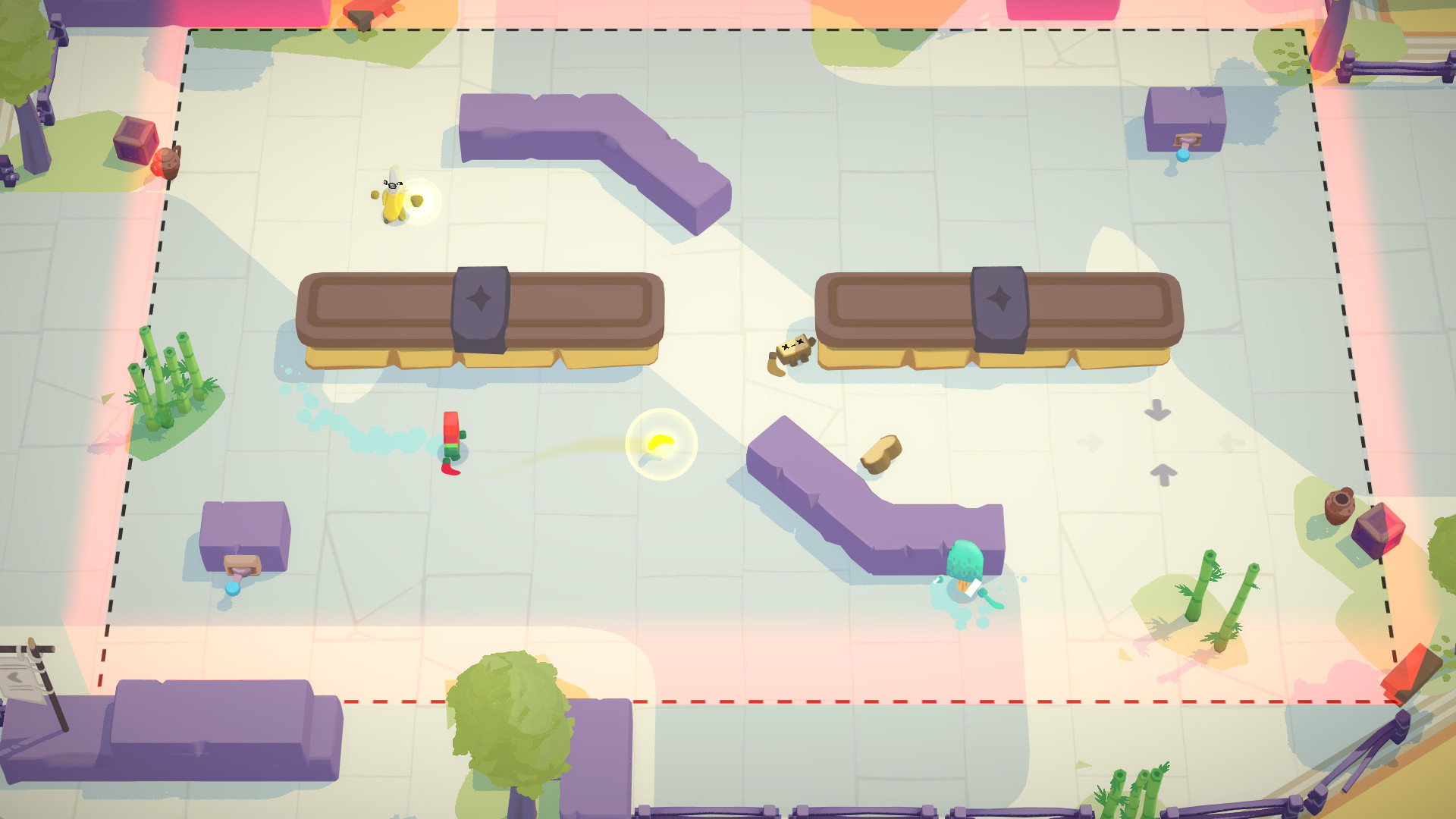 There are also powerups in the game which can stack and last until the very end of the entire match (not the end of the round the powerup was picked up) – so rush to them! What do I mean by stacking though? Powerups literally combine with eachother to create really chaotic combat combos. For instance, if you pick a ‘Multiple Boomerang’ powerup (which splits a boomerang into 5 halfway its trajectory) and an ‘Explosive Boomerang’ powerup, you can throw your boomerang and it will split in 5 and all 5 will explode, basically wiping half the map clean (be careful, you’re not invincible to your own attacks!). This creates a really strong and entertaining power dynamic where rushing powerups is recommended (there are negative debuff powerups too) in order to become the most broken OP possible… in contrast, the entire lobby will prioritize murdering you first before destroying eachother.

There are 3 game modes you can play with friends or bots: a free-for-all style mode where the first to 15 kills wins, a group version of the previous mode (where a revive mechanic is enabled) where kills don’t matter – the team with lasting survivors wins a point (first to 10 wins) and a mobile-sort-of King of the Hill mode where you must pick up a Golden Boomerang and not get horribly murdered for a few seconds (beware, if you throw it, you lose it so you’re restricted to melee).

All modes are incredibly fun (Free-for-all is still my favorite) and the map rotation is solid (all maps feel quite different and have their own quirks and traps that should yield the occasional hilarious moment) that allows replaying the game multiple times without boredom hitting outright, which is something some party games suffer from, in my experience.

Overall, Boomerang Fu is a skillbased and fun PvP combat arena game with a really interesting powerup stacking mechanic and varied levels that slow down the repetitiveness of the gameplay. 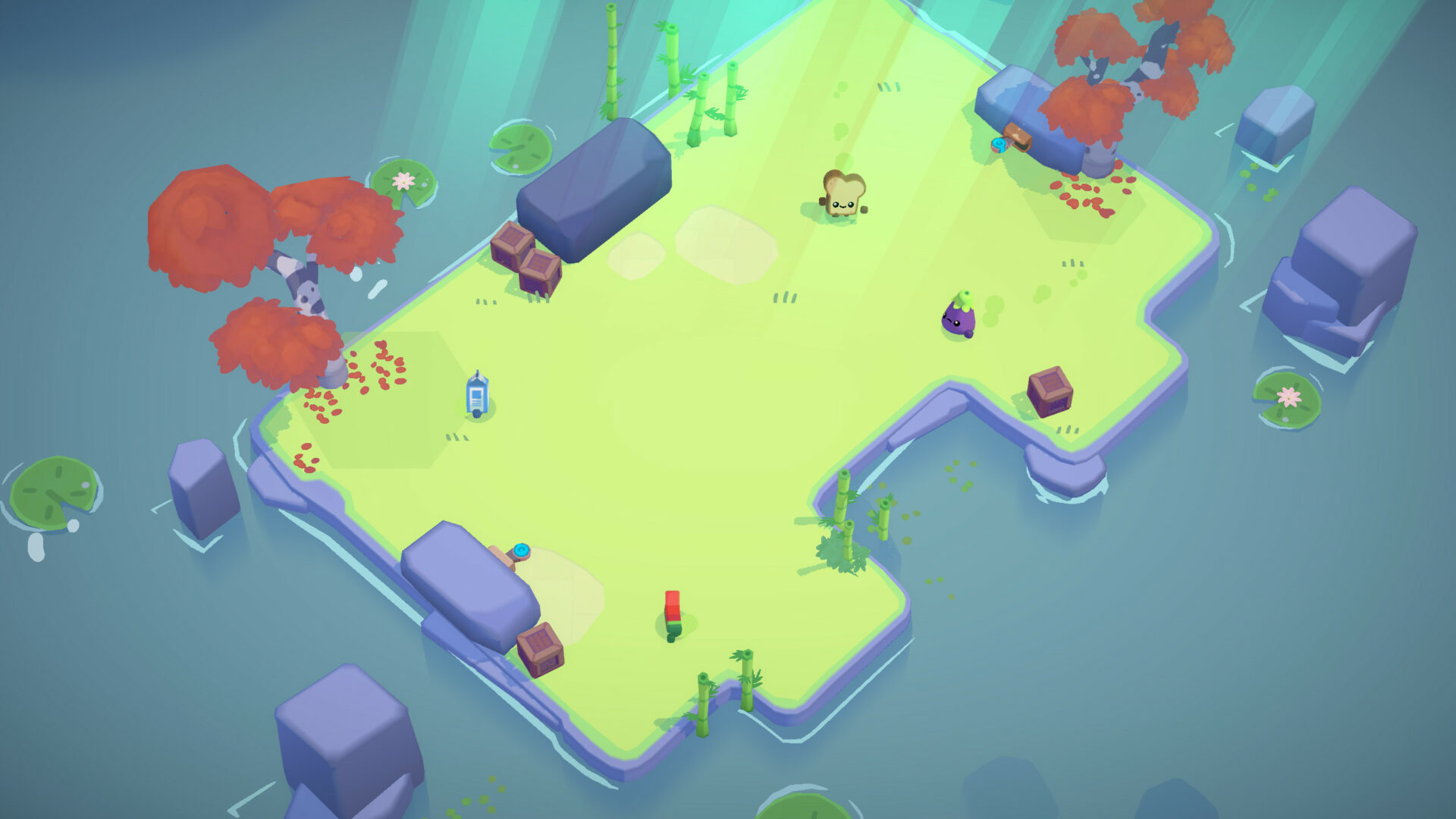 Boomerang Fu has a very simplistic look. The characters you can select are food related items such as fruit, a cup of coffee or a carton of milk with faces on them. The vibrant colours really help visibility and allow combat to feel fair since there’s no issues with confusing players with the environment (you can hide in bushes which can yield really smart stealthy kills). The game also runs well even when streamer through Remote Play like I did – very stable both from a networking and visual performance point of view.

As far as the audio is concerned, there are a few music tracks that repeat but are good enough to convey the fun atmosphere of playing with friends. Sound effects are great, from boomerangs sounding like the sharpest swords in the planet, to explosions, fire and freezing effects and so on.

If you have a powerful connection for Remote-Play, the lack of an online multiplayer shouldn’t hurt you and with a decently sized group (up to 6 total) the game is an absolute blast I can’t recommend enough, while saving quite a bit since only 1 person needs to own the game. If Local is out of the question for you, however, Boomerang Fu is a hard pass, despite it’s decently low price of entry of 12,49€. All around, a fun game to play with friends limited by its Local-Multiplayer-only capability.