Faster than the star!~

When this game was first announced that it was getting translated and coming to the west, I was kind of interested in it. Though, it wasn’t until the release date was ever so close that I found out that there was an anime. Mostly because a random visit to the wiki showed that there was an OVA made to tie the game with the anime. Well, rest assured that I did watch, more like binge, the anime before diving into the game. It was better than expected. Sure it has some admittedly interesting fanservice shots and it’s just an average slice of life sports anime (with more emphasis on slice of life compared to other sports anime), but it was a fun watch and the yuri subtext was a nice surprise. So how does the game live up? 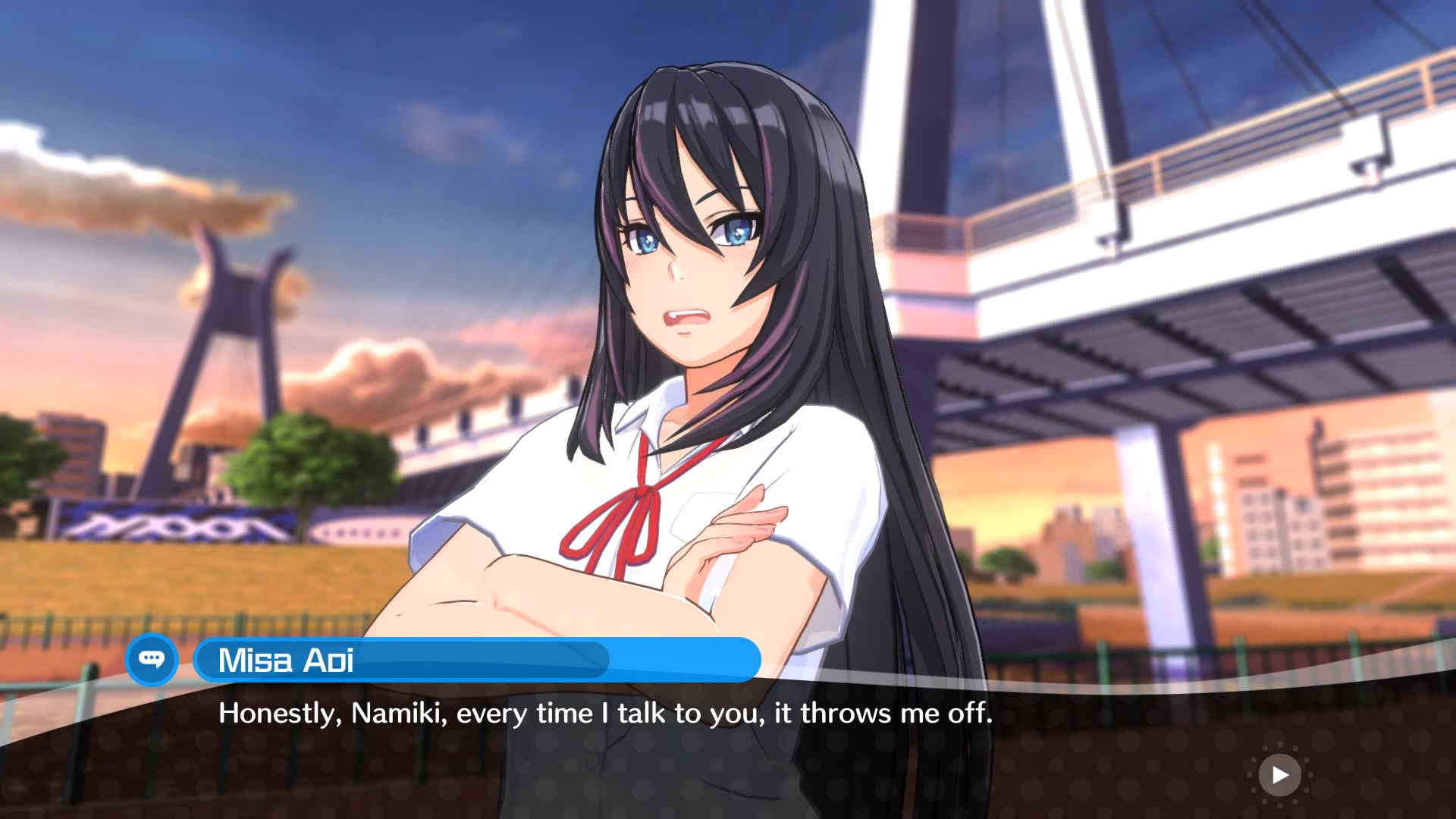 Kandagawa Jet Girls’ story mode gives you seven story arcs, each belonging to one of the teams, that you’ll be reading through. You only have access to Team Kandagawa Jet Girls, featuring our protagonists Rin and Misa, but as you go on the other arcs are unlocked. You’ll follow a loose outline of the anime plot with Rin and Misa, though switched to where they win every race of course; Kaguya and Kuromaru of Team Dress that plugin what you couldn’t know in arc one, but with the added point that their schools jet club is in peril; Pan Tsui and Pan Tina of Team Hell’s Kitchen that battle balancing being jet racers and idols and participating in an idol race show; Jennifer and Emily of Team Unkai Surfers that are, in their eyes, becoming ninjas by racing and exploring Japanese culture through movie sets; Manatsu and Yuzu of Team MKHU where they wish to become rich and famous by winning the Kandagawa Cup; Team Sea Serpents where Inori tries to cure and purify Fuuka as her angry racing personality is lingering longer than it should; and lastly the game exclusive Team Grindcore on a mission to defeat every racing team to pludge their lives into despair. The writing here, while a step down from the anime, is serviceable. Considering that the visual novel sections are propelled exclusively from spoken dialogue or thoughts and each chapter has to transition into a race, it could have been worse. At least none of the stories bore me to sleep despite having the opportunity to (as I did play around midnight multiple times) and it was nice to hang around the girls again and get some more information about them that the 12 episodes we got couldn’t. 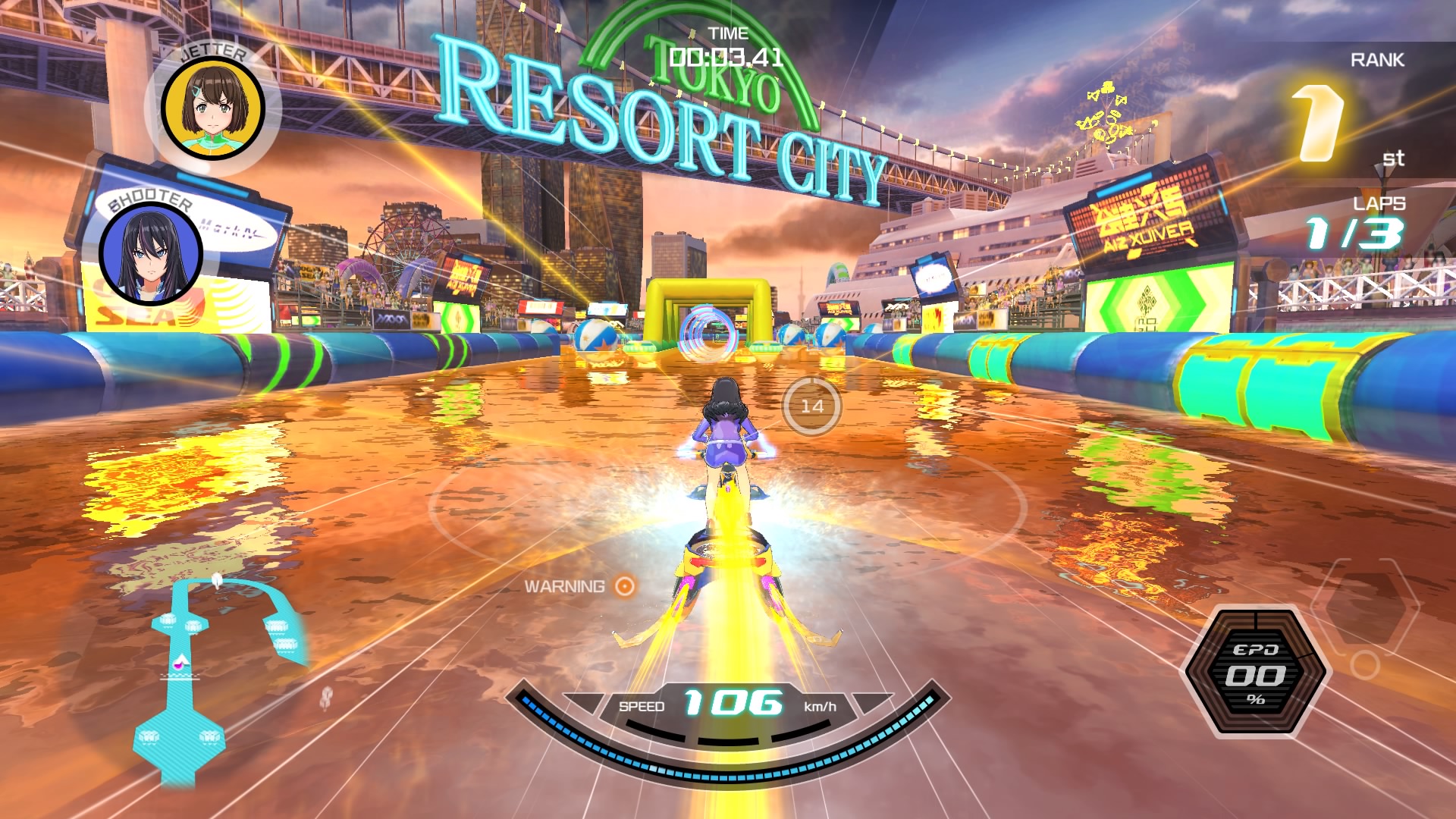 With that said, let’s get into what most players will be picking this up for, the jet racing. If you ever played any racing game, it’s basically that but on water. At first, it’s going to feel bad, but once you get a hang of it it’ll click and will feel better. There’s a surprising amount of depth associated with racing that will determine how it handles. You can get a starting boost to raise your chances at winning, using ramps and performing tricks will give you a temporary buff, and you’ll be gaining EPD as you race to boost. The jet’s nose is particularly important as having it up will increase speed, but it’s turning ability will suffer, while putting it down will decrease speed so you can take those sharp turns. You can also drift while turning, which will charge up a boost that will go off once you’re out of drift mode. The jet skis slowing/powering down for a couple of seconds carry over from the anime as you’re equipped with a basic water gun (mostly to shoot beach balls out of you) and can pick up other guns that will lock onto your opponents in front and behind you. The EPD meter, while used to boost, can be used to activate the gun’s ability (which go from a more devastating attack to giving you a shield) once you have max EPD. 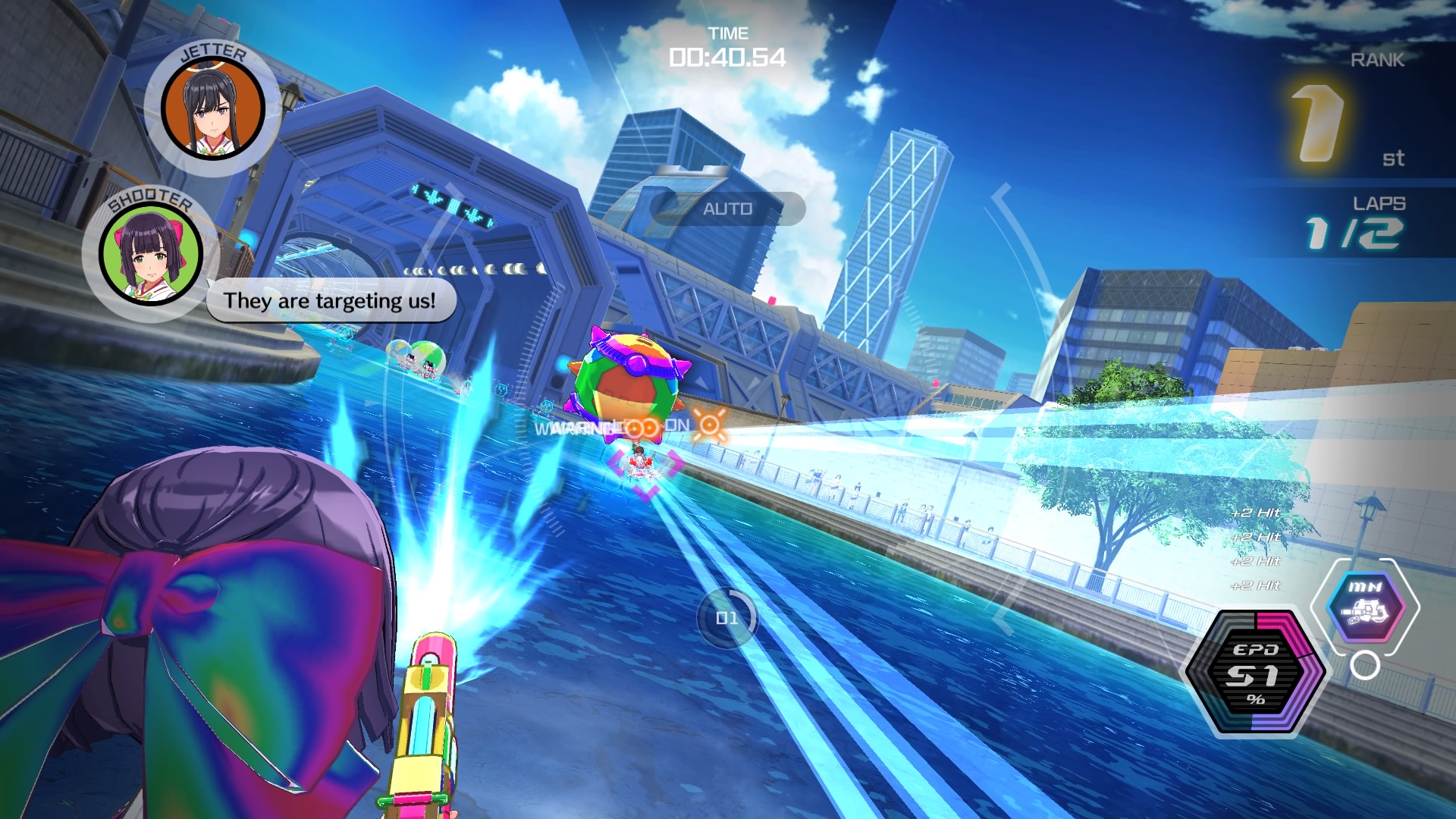 Also, the uniqueness each team had was supplemented to game-ify it. Everyone still has their own jet ski models, but they don’t feel like they handle too differently from one another (apart from Messie not handling turns well). There’s this whole thing where their wetsuits explode off of them if it takes too many hits that are missing, but I do understand considering that it could be hard to implement (especially in multiplayer) and you can just switch out everyone’s outfits at any time anyway (sadly the swimsuits they have under the wetsuits aren’t in unless it’s a challenge prize that I haven’t got yet). The water guns each of them wielded are instead pickups. Each team does have a unique trick animation though, with them granting different buffs depending on who you’re playing. 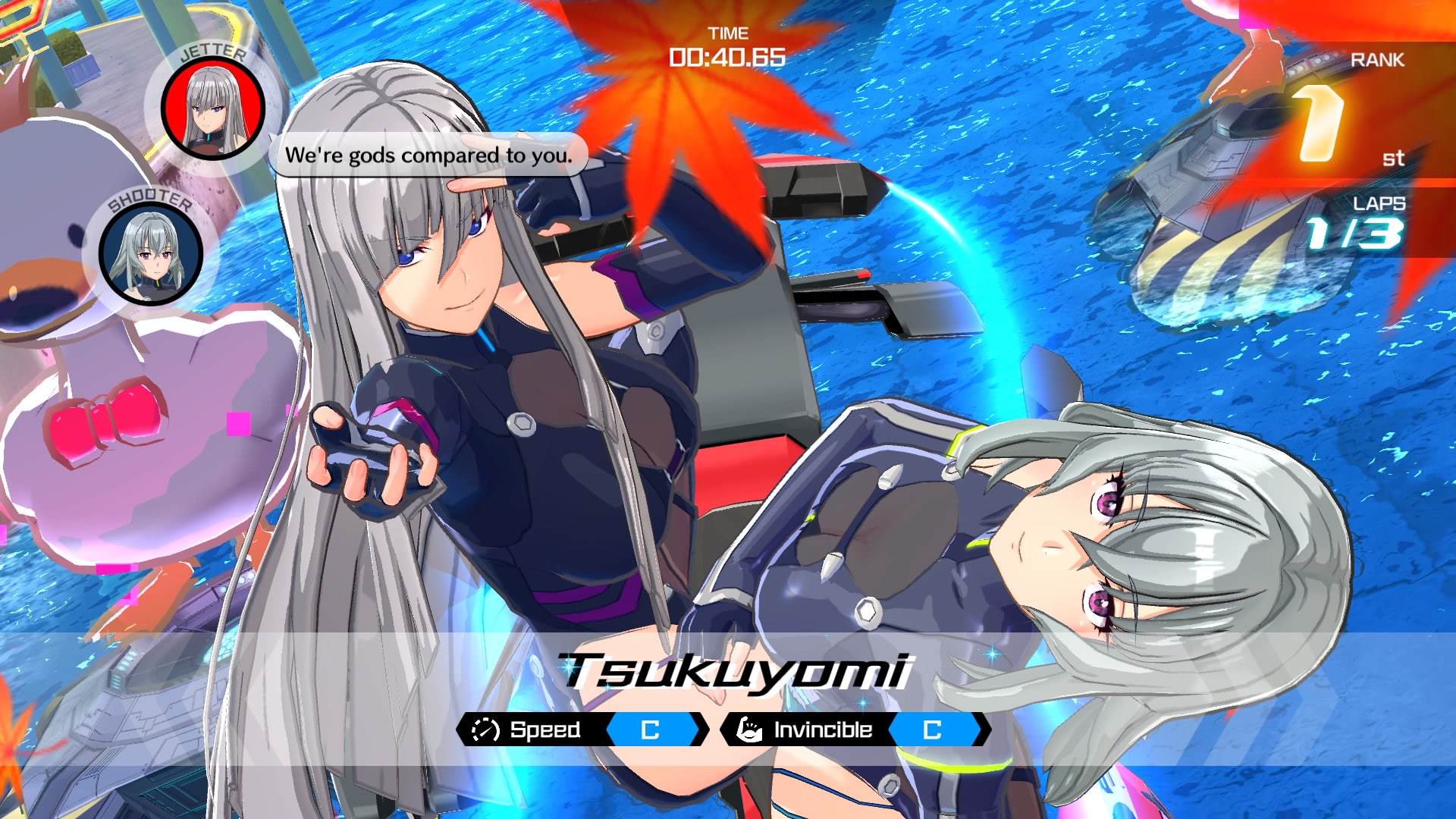 The AI, though, is laughably easy to defeat most of the time. Unless you’re just really bad at racing games, you’re going to easily overtake them and be way ahead of them. While it’s nice that you won’t have to replay due to losing, it also makes it boring to race them. You’re just going through one of the seven possible courses at this point rather than getting challenged. The only time it became difficult to win was in the last arc since every other team upgraded their jet ski while you can’t. 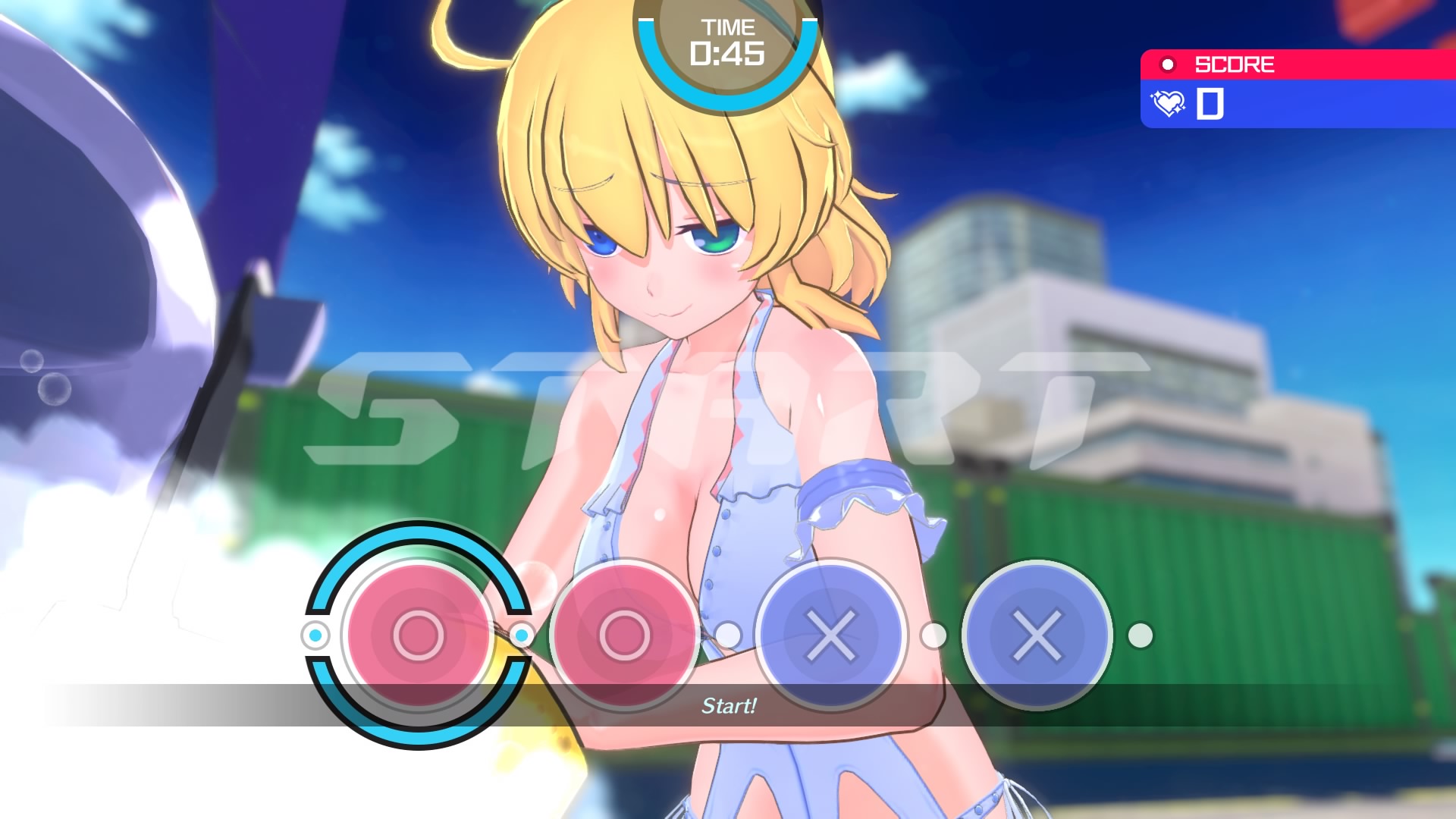 Outside of racing, you can shop around for cosmetics or machine parts. Most of the items need to be unlocked by either completing the story or completing chapter challenges that will grant you something cosmetic once you complete all three (luckily, the ones you did get carries over when you retry). As cosmetics are self-explanatory, you can buy machine parts to improve your jet ski in various areas (like drifting or raising speed) or buy decals. Of course, everything costs money. Luckily, there are four minigames that you can play to earn some quick cash rather than playing story chapters. These do get old, but you can choose from doing QTEs as your favorite girl (or favorite Senran Kagura girl) washes a jet ski, play a runner that tasks you with mopping, get on your jet ski and go through EPD hoops, or put your favorite girl on a treadmill and button mash to grab hearts (which is my least favorite of the bunch). 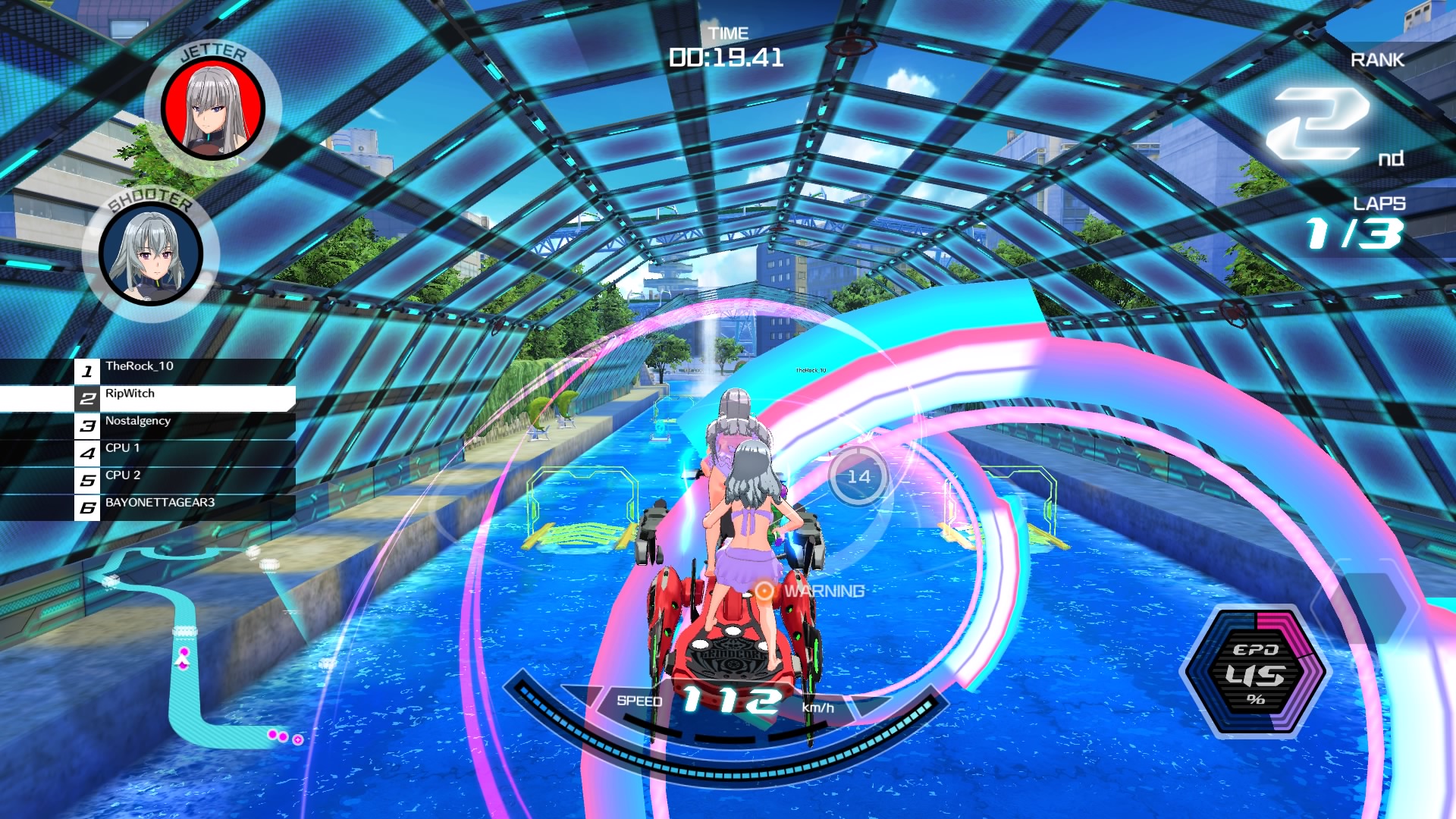 Lastly, the multiplayer is as you expect. You’ll be racing with other players, and AI but they have literally no chance, to see which one is the best. You can choose between just racing casually or taking the ranks to climb up to the top. If you’re getting this mostly for some multiplayer action, I’m not too sure how much staying power it has. I’m not sure how it is on PC, but on PS4 I barely encountered anyone online and when I did it was mostly one other person (who was already top 3 ranked) with having three games with two or three other players. On that note, I recommend going into ranked multiplayer after completing all the story arcs as you won’t have access to all machine parts nor Grindcore. Trust me. I went into Rank Racing a couple times before and I was absolutely destroyed (I was a whole minute or two behind). When I finished the story, grabbed some parts, and went back out, I managed to snag some revenge wins by less than 10 seconds. It felt so good since it was a constant battle of staying in the first place and desperately trying to correct mistakes. It was also pretty funny catching up to the AI racers, but difficult to actually see which one is an actual person.

Kadagawa Jet Girls, game edition, is pretty much a bit above average. The stories told (or retold) are serviceable, but not too boring, the racing mechanics do have depth to them, racing feels good once you get used to it, however, the AI is way too easy making races boring unless you manage to get on an online match with real people. I do feel like I enjoyed it more due to watching the anime beforehand, so I do recommend checking it out as the main draw to it is being able to hang out with the girls again and getting a peek at their lives. Though, do not pick this up if you’re just expecting a game with a ton of fanservice that goes past the characters wearing bikinis. I also recommend picking this up on a discount as the price is a bit steep in my opinion. 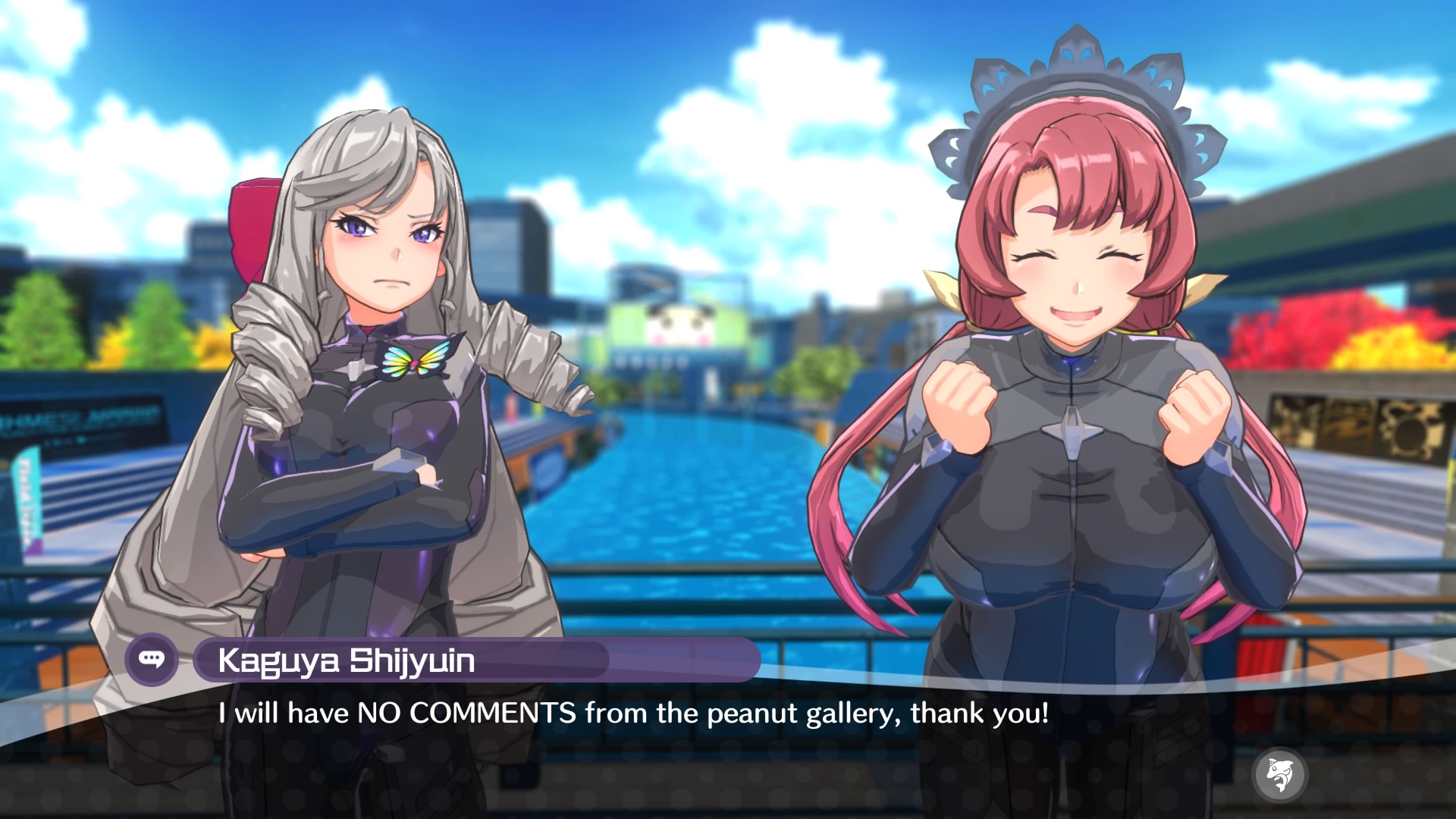