A rogue-like hack and slash where we confront the monsters of the dream world.

Cassidy lives an interesting life. By day she tries to get to know other people and socialise, and by night she fights monsters in her dreams. This concept is put together in a form of a rogue-like hack and slash game, with nightmarish dreams taking form of procedurally generated dungeons with tonnes of gear customization and loot and plenty of monsters and environmental hazards to face.

Our main heroine, Cassidy, moves from a small village to a big city and has to adjust to a new life. However, her past continues to plague her dreams and holds her back from moving forward in her life. To confront the nightmares of her past and the loss she witnessed in her younger years, she battles it all out in her dreams. And in her waking hours, she goes out and attempts to make friends. 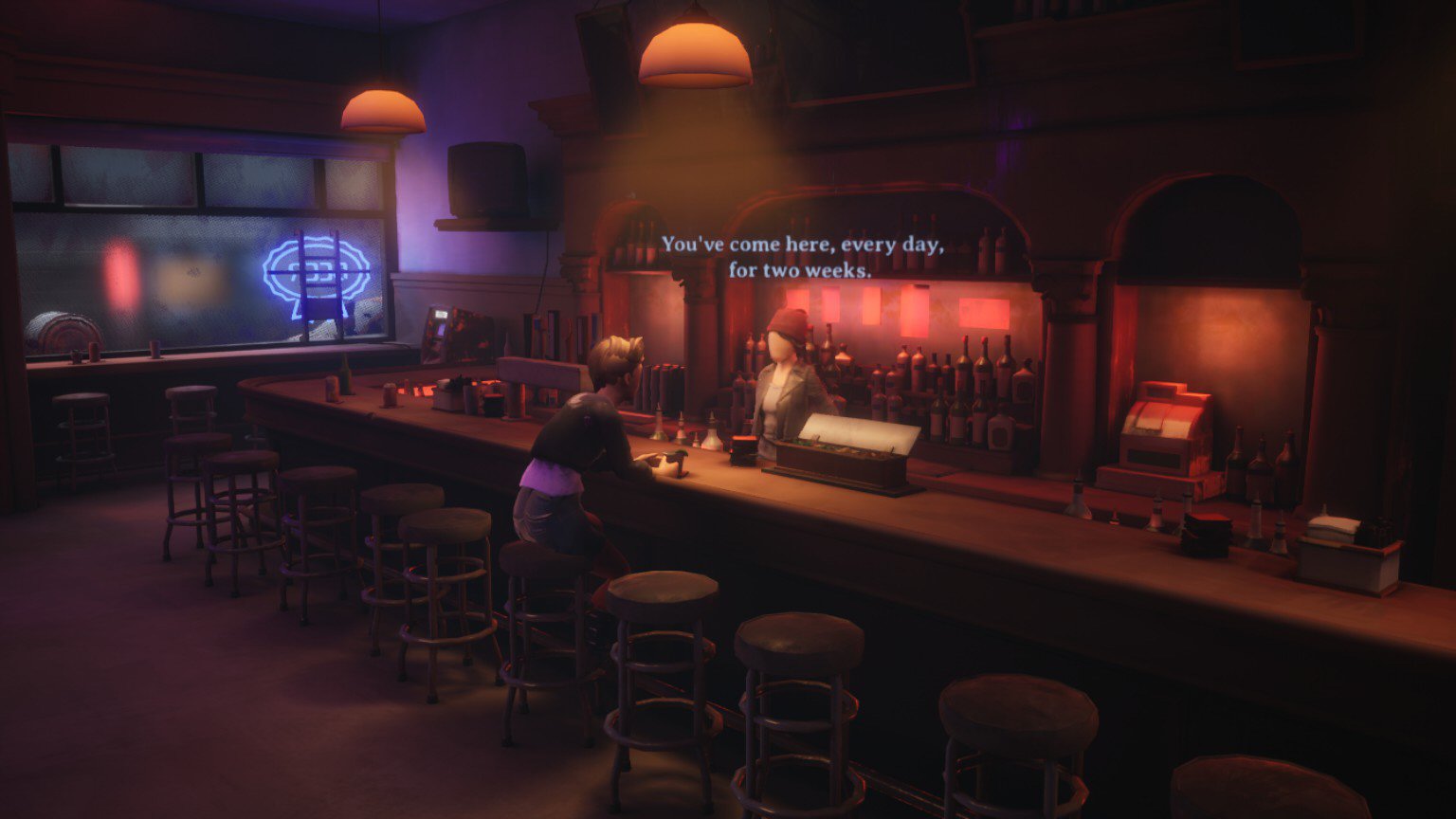 It’s an interesting premise that many people can relate to in some way. Oftentimes the problems from our past are like demons that try to destroy all good thoughts and experiences that we have in life, and this is depicted quite nicely with the way Cassidy fights faceless monsters in her dreams. The dreams themselves use the environments from the places she’s familiar with, such as her hometown.

As Cassidy interacts with other characters and builds relations with them, she gets to share some of her plight with them while at the same time learning interesting things about their lives too. At the moment the game only has 4 city areas that we can visit and 6 different NPCs to build relations with. Hopefully as more of the game is made during this Early Access period, more city areas and more NPCs will be added. This can make the waking hours a bit more interesting, because at the moment it all feels too samey and routine. 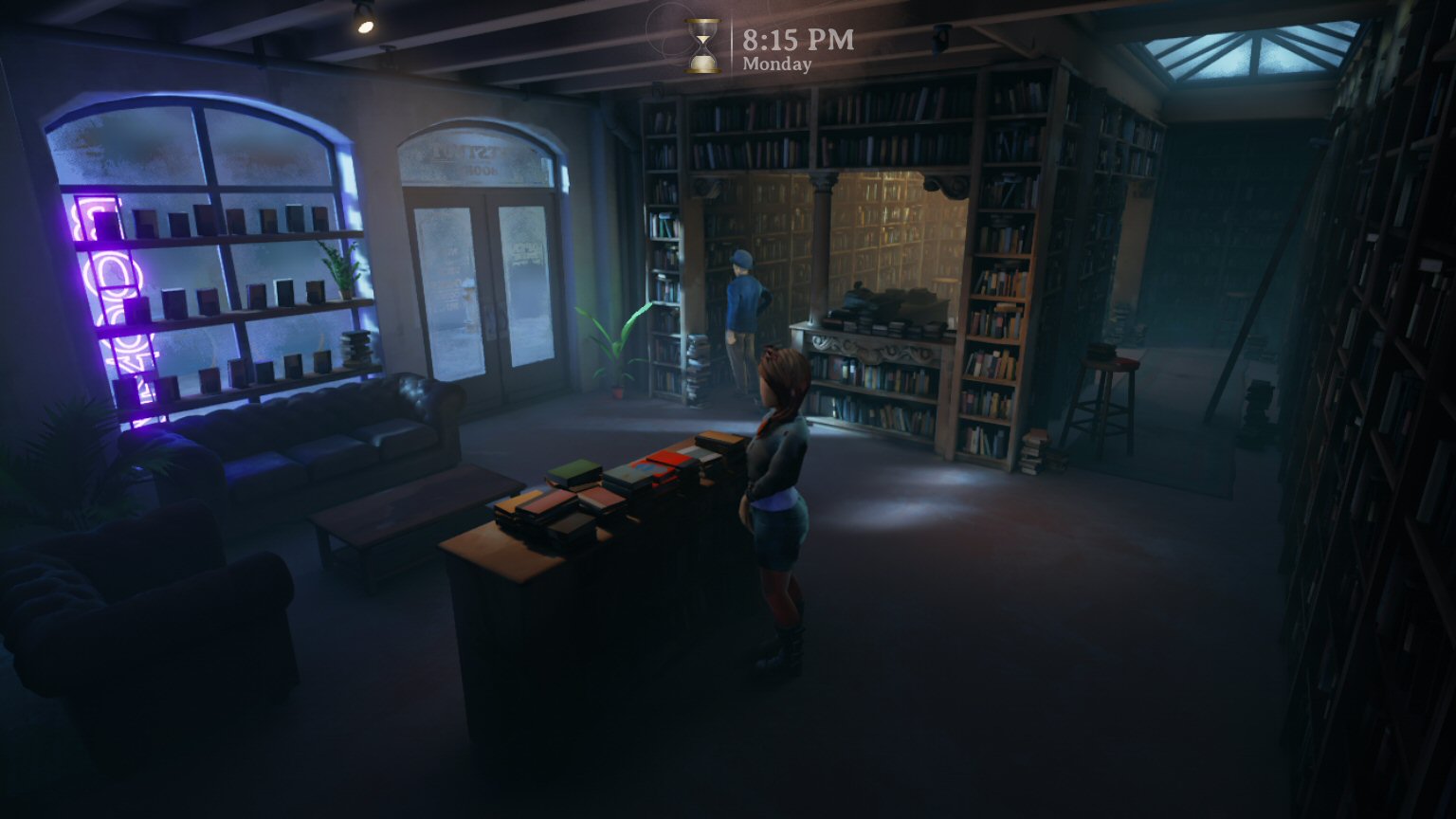 Now let’s have a look at how gameplay is connected with the story and setting concepts mentioned above.

The socialising and relationship-building helps us to unlock new things for the dungeon runs, such as new gear and special abilities. However, the unlocked things aren’t available straight away for our use and only have a chance to appear in the dungeons. The intention is that the better relations we have with NPCs, the better stuff we unlock that can appear in dungeons, and hence this should allow us to tackle harder challenges. This is a nice concept, although I think the execution needs a bit more work. As of right now, the new unlocks don’t feel very rewarding, because we can’t use them as soon as we unlock them. We just have to hope they’ll appear in the dungeon as pickups. The alternative is to grind a lot for random rare resources that could allow us to craft the gear we unlocked and be able to assign it at the start of a run. 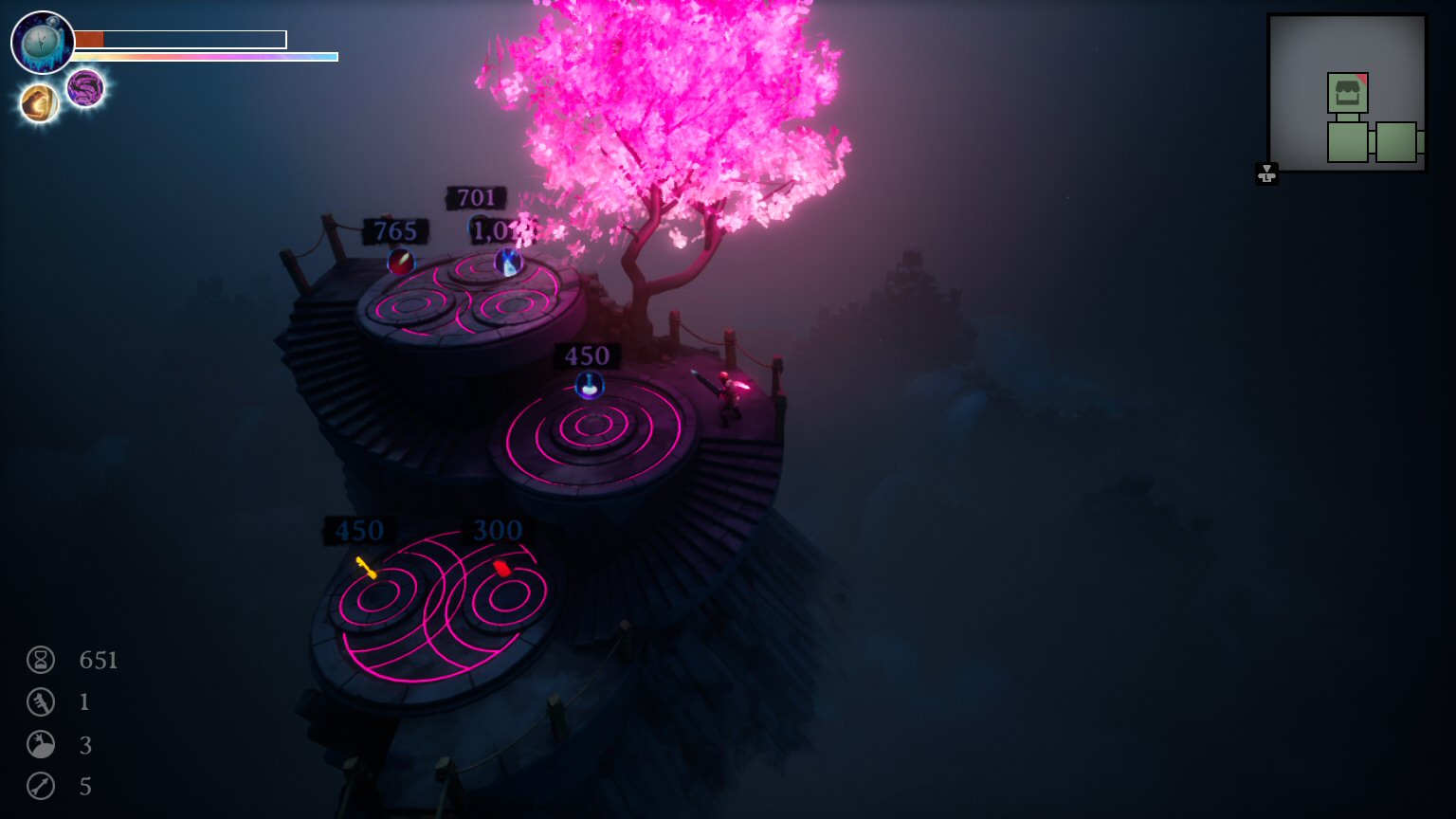 Building relations with NPCs also gives us some passive bonuses, one of which we can choose to ‘equip’ before a dungeon run. Each NPC gives a different bonus. These bonuses start off rather weak, but over time improve as we get closer with the NPC responsible for it. This is also a great idea, but again, I think it needs a bit of tweaking, because at the moment it feels a bit too grindy and the bonuses most NPCs offer don’t seem worth it. For example, why equip a bonus that grants +x% fire damage if you’ve no idea whether you’d find and pick up any fire-dealing gear or abilities in the dungeon? I think perhaps elemental bonuses should also include protection from such elements too, which can make them more useful.

The dungeons are procedurally generated, but they follow in a certain order. The first dungeon we do is the Hometown themed one. It uses environments from Cassidy’s hometown and only has a certain selection of enemies and equipment. The next one is City themed, and so on. In total there are 6 dungeons. They always go in that specific order, but the layout of each dungeon varies from run to run.

Another aspect of rogue-likes here is the permadeath, though the permadeath only applies to dungeon runs and not the waking hours. If we lose all HP in any dungeon, Cassidy wakes up. The next time we go to ‘sleep’ with her, we begin it all from the beginning, with fresh new gear and from the first dungeon. I personally am never a fan of such game mechanics, in any game really, as it feels too grindy and forces us to start over from scratch from earlier dungeons that we’ve already beaten and find too easy by now. 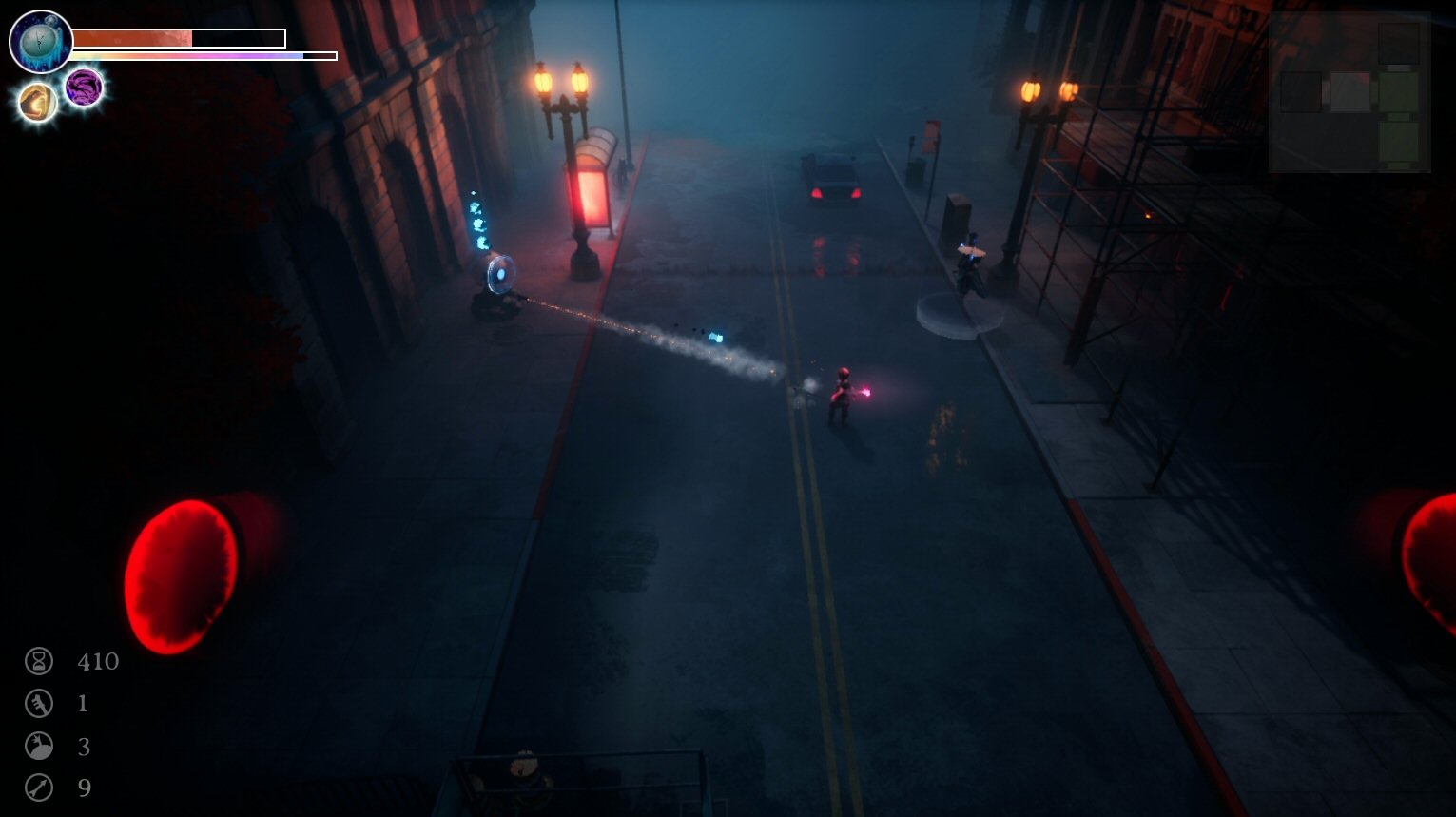 Some, but not all of the dungeons have bosses in them (for example, the second dungeon is missing a boss and only has the same two stronger-than-normal minions in it with some turret traps in the final room). The boss fights can be skipped if we’ve already beaten that dungeon previously, which is nice and helps to ease on the grind a bit.

The gear customization is quite numerous, although most things are locked at the start. There’s a melee weapon for dealing damage, a ranged weapon for ranged damage, an armour and a shield for protection, the shoes for evasion mechanics, the special abilities for secondary damage, and the keepsakes which offer a variety of passive bonuses.

There is a really good variety of weapons in the game already, and some weapons are even quite creative and fun to use. So aside from swords, baseball bats, and bare fists, we also have things like extendable stingers on ropes and ground manipulation attacks that cause rocks to jut out and hit enemies. The special abilities have varying effects, usually acting as more powerful spells that do a lot of damage to enemies. Different shoes allow us to do different types of evasion, such as rolling, dashing, and teleporting. The shield allows us to block and parry attacks. Plus there are also bombs and keys to pick up that help to open certain doors. 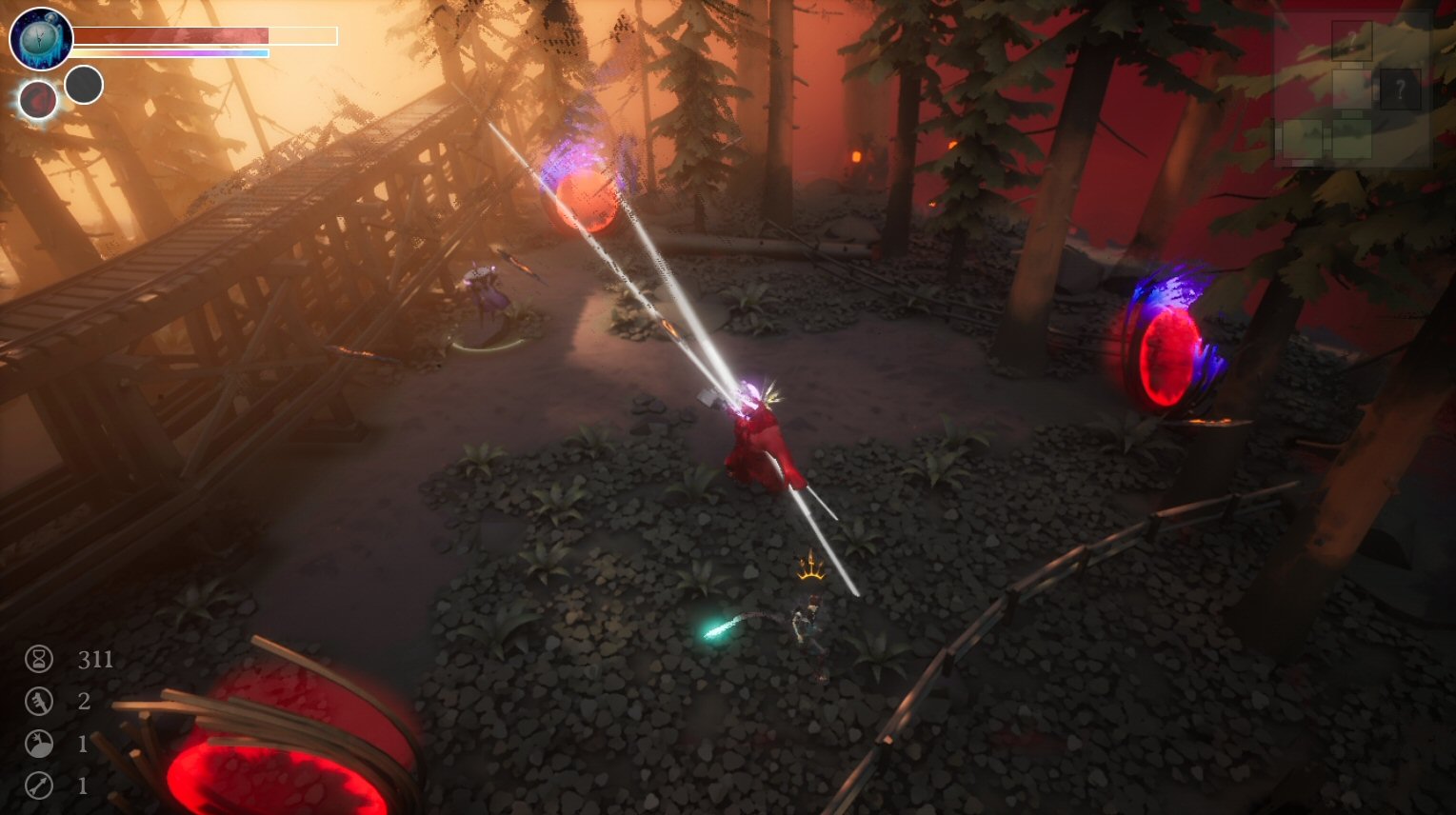 By combining all these elements, we can get some nice hack-and-slash fights going on with a lot of epic dodges just at the right moments. The enemy variety though is quite small at the moment, and it seems that many of the enemies repeat themselves from one dungeon to another, except with stronger stats. This can feel quite repetitive. Most enemies also seem a bit too bloated on HP and this unnecessarily draws out the fights. You could be juggling an enemy in the air with your attacks again and again and they just take a tonne of punishment before biting the dust, even if you use whatever are the most damaging weapons available at the time.

In some rooms, it can get a bit messy when we have a lot of traps and enemies at the same time. Since the game is 3D and we look at the room at an angle, in some instances it can be a tricky to judge the depth, especially when using ranged attacks. Not a major problem, but it might need some refining.

There are occasional puzzles to solve too. These are pretty nice and don’t keep you stuck. However, they can get repetitive if you are redoing the dungeon runs, because the puzzle mechanics are not too varied yet. 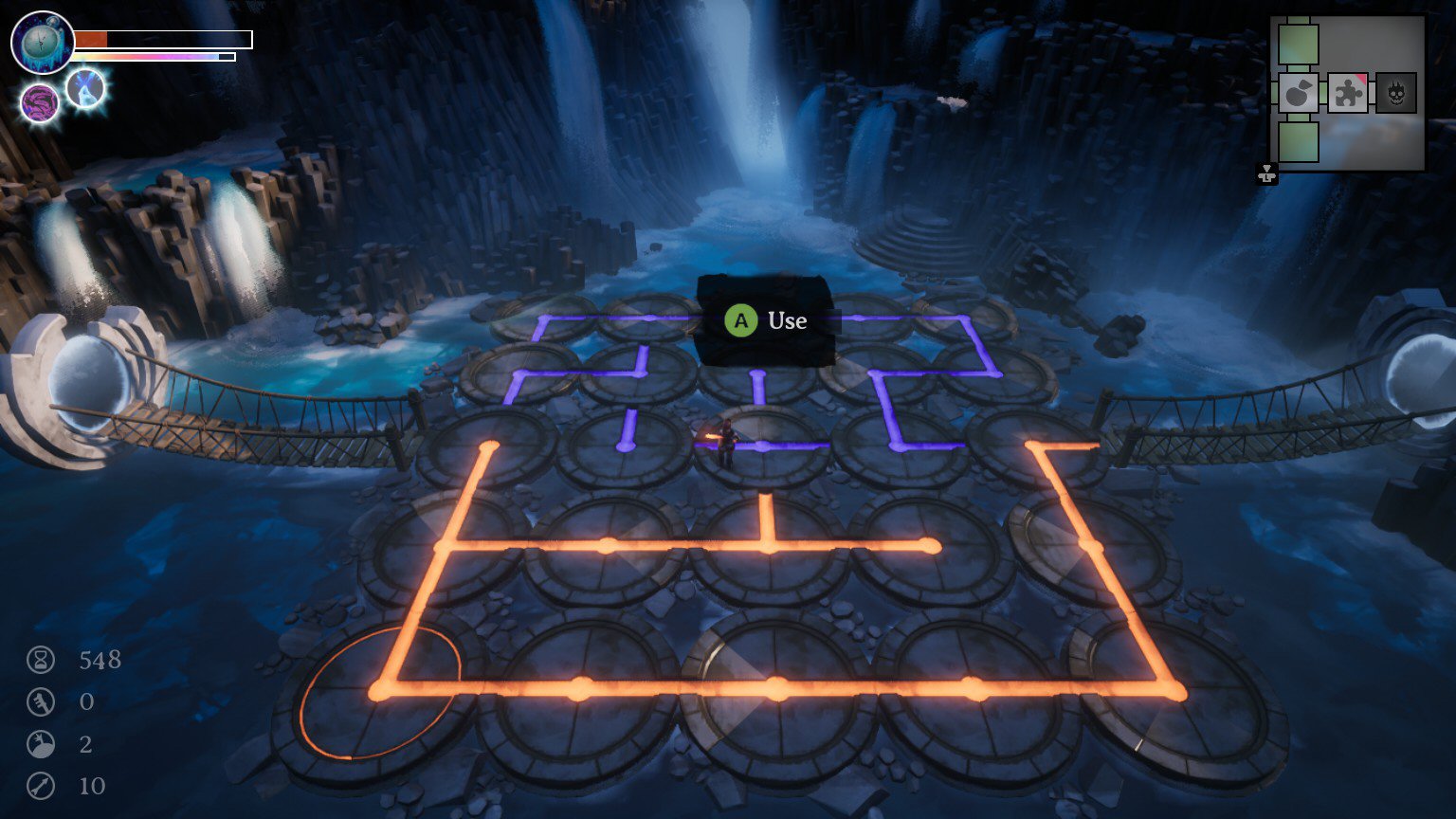 The visuals show us several different modern day locations. They’re not the most artistically beautiful visuals, but they’re enough to service the gameplay. They look a bit like PS1/early PS2 era 3D models. I think a bit more colour and detail would’ve been better.

The music is pretty good and pleasant. Most of it are serene piano tracks that nicely assist the dungeon exploration or our wandering in the city to make friends. So, music-wise, the presentation is solid.

UI is decent and colourful, and when we pick up new things it shows us if we want to replace our currently equipped gear. However, I think it would also be nice if there was a clear indication of what type of item we’re looking at when we simply come close to it and its stats show up. It’s not always clear if the thing I’m looking at is a melee weapon, a ranged weapon, a special ability, or just a keepsake for example. We only see the item’s stats when we are next to it, but not what type of item it is. 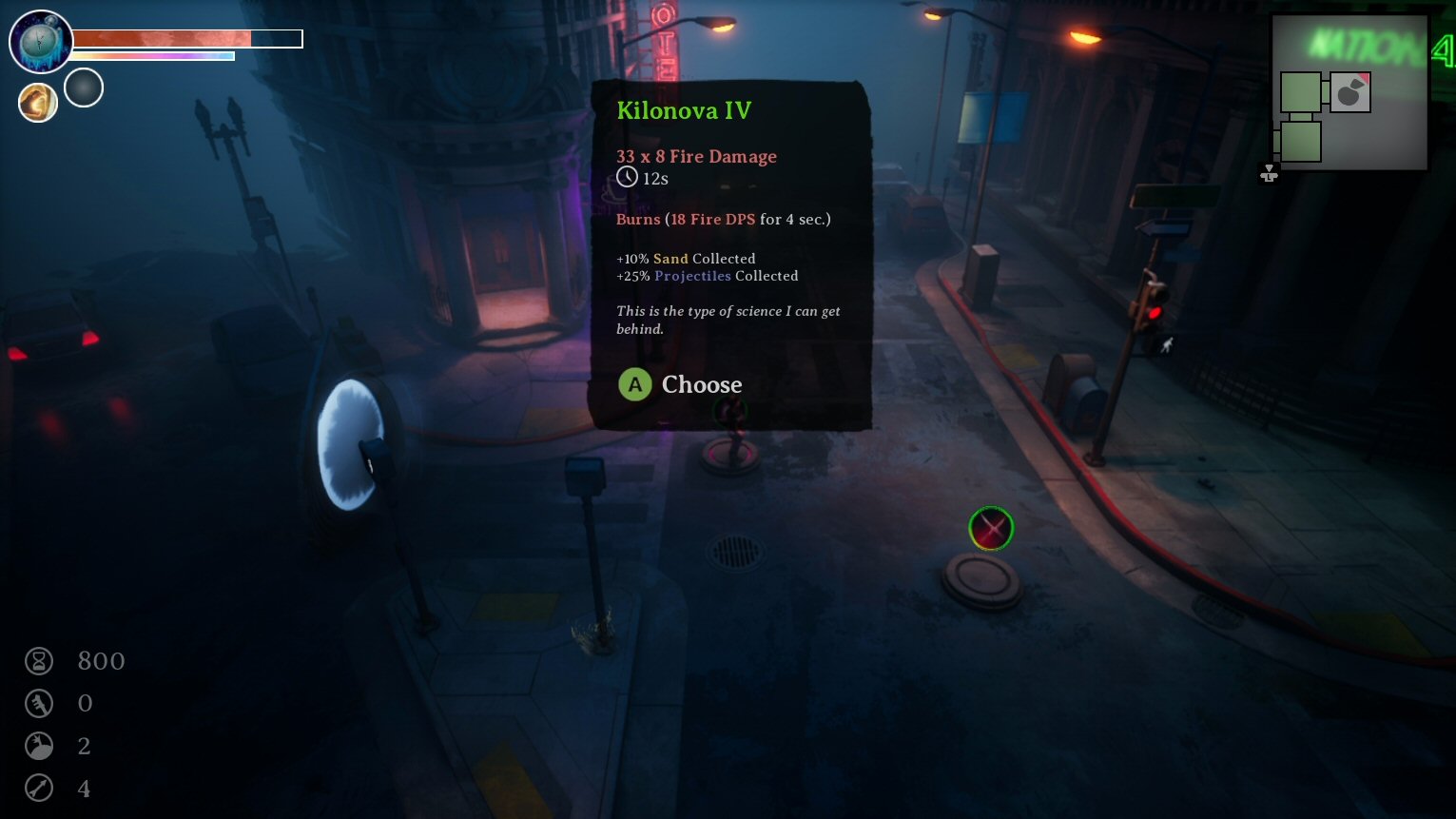 There’s no voice acting in the game, but it’s not necessary, as the main aspect of the game are the dungeon runs and combat. The dialogues with NPCs come up one line at a time and can even be skipped.

Dreamscaper shows promise. It’s not among the best roguelikes or hack-and-slash games out there, but if you enjoy these genres very much, then it’s worth checking out and already offers some good content and entertainment even in the Early Access stage. My main critique really is about the repetitiveness and grinding it has at the moment, so hopefully there’d be more stuff added to it to spice it up more, especially some new enemies to fight and new puzzles to solve.