A team of anthropomorphic animal vigilantes come together to dish out kung fu against an ancient evil threat.

‘Dusty Raging Fist’ is a standard sidescrolling beat-em-up where we follow a small team of animal fighters, acquire elemental powers throughout, beat other anthro animals senseless, and try to save the world in a rather stereotypical cheesy fashion. And all this can be done either solo or co-op.

As mentioned above, the story is quite cheesy and stereotypical, so don’t expect anything super deep. It does try to take itself seriously most of the time (or at least that’s the impression that I got), but I think it would’ve had more charm if it didn’t take itself seriously and instead played on common tropes.

The setting seems quite interesting and creative. Every character in this setting is some type of anthropomorphic animal. This includes the majority of the enemies too. I personally think a more story-driven game could work well in a setting like that. 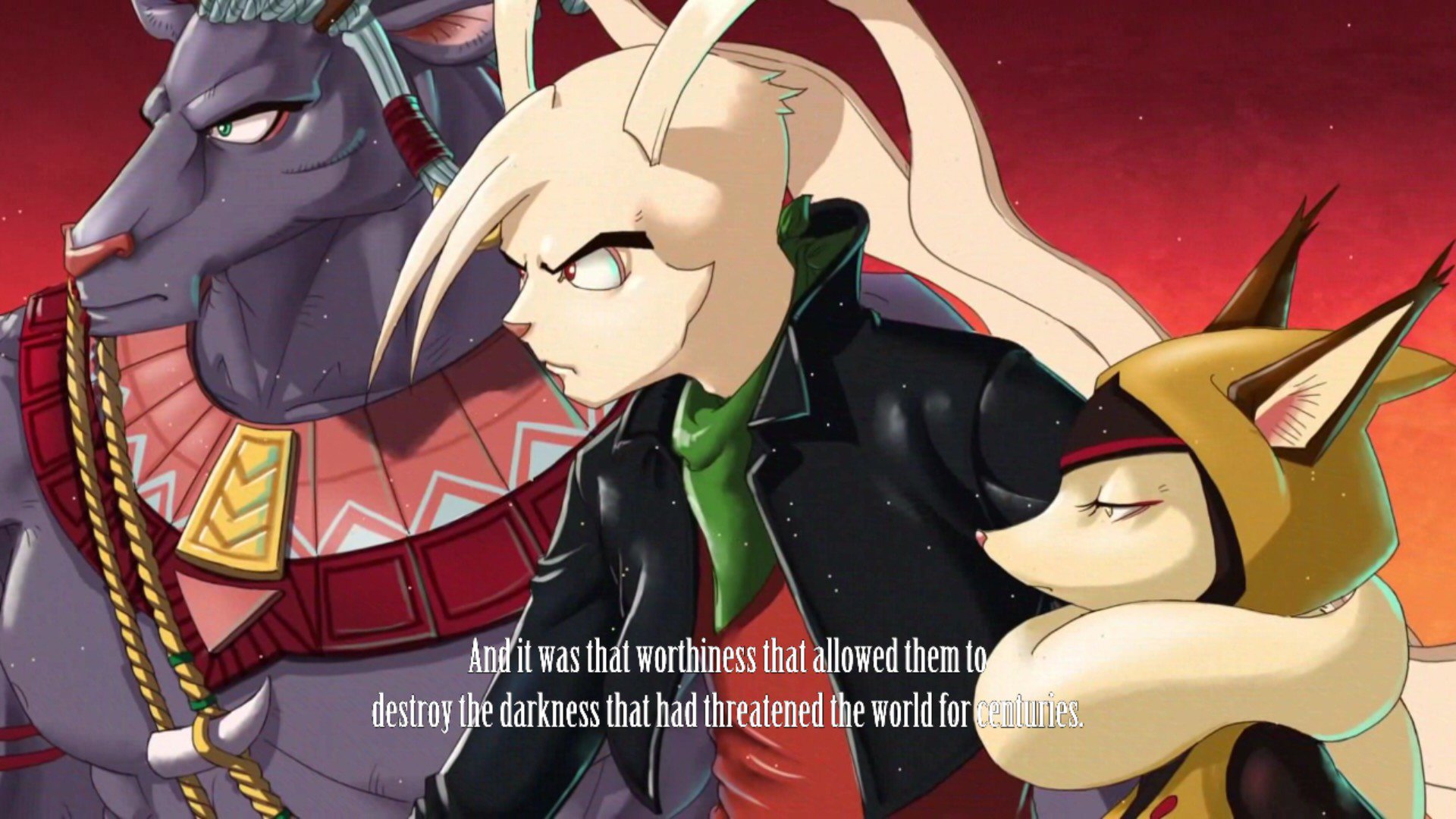 We’re not really given any backstory on the characters and the setting, however – who they are and why they fight crime. The game is a prequel to another title ‘Dusty’s Revenge’, so perhaps the events in this title would make more sense to those who played ‘Dusty’s Revenge’, but for anyone starting with ‘Dusty Raging Fist’, the reasons for anything happening won’t be clear. However, in a game like this, the story is a distant second, and the focus is mainly on the beat-em-up gameplay, so let’s break that down.

There are 5 characters in total in our team, 3 of which are fighters and 2 are supports. The fighters are Dusty, who is balanced in stats, Kitsune, who is the speedy one, and Darg, who is the powerhouse. The supports are Leo, who specialises in explosive weaponry, and Snow, who is a sniper.

Whether you play solo or co-op, you choose one of the fighters. The mechanics follow a somewhat common style. We have quick attacks, we have heavy attacks, and we also have ranged attacks. These can be chained into combos. At first, only some combos are available, but over time as we level up the characters, more combos become unlocked. Each of the fighters has their own distinct style, but the combo patterns are the same for all, so you can easily play as another fighter and know what you’re doing. 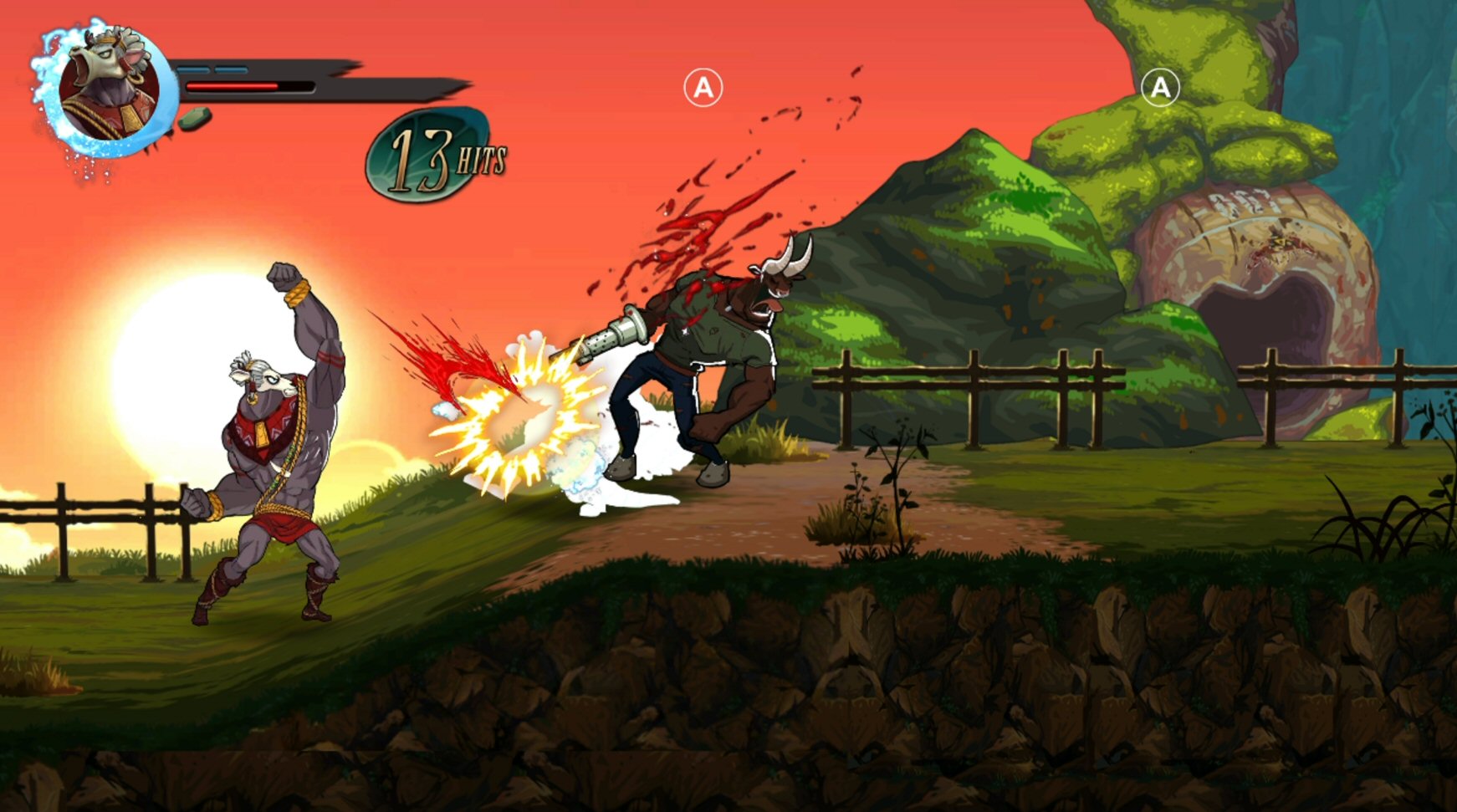 The two support characters offer us special attacks to be used in combat. We have a support points bar that fills up as time goes. If at least one section of it is full, we can use one of the supports. With each one, we can aim at the enemies manually and shoot. When using Snow, the sniper, we can move the crosshairs and fire at the enemies, and when using Leo, the explosives expert, we get to control the arc of where he will shoot a rocket, which can hit multiple enemies at once. Having these support characters nicely spices up the gameplay and can be a nice way to thin out the enemy crowd. 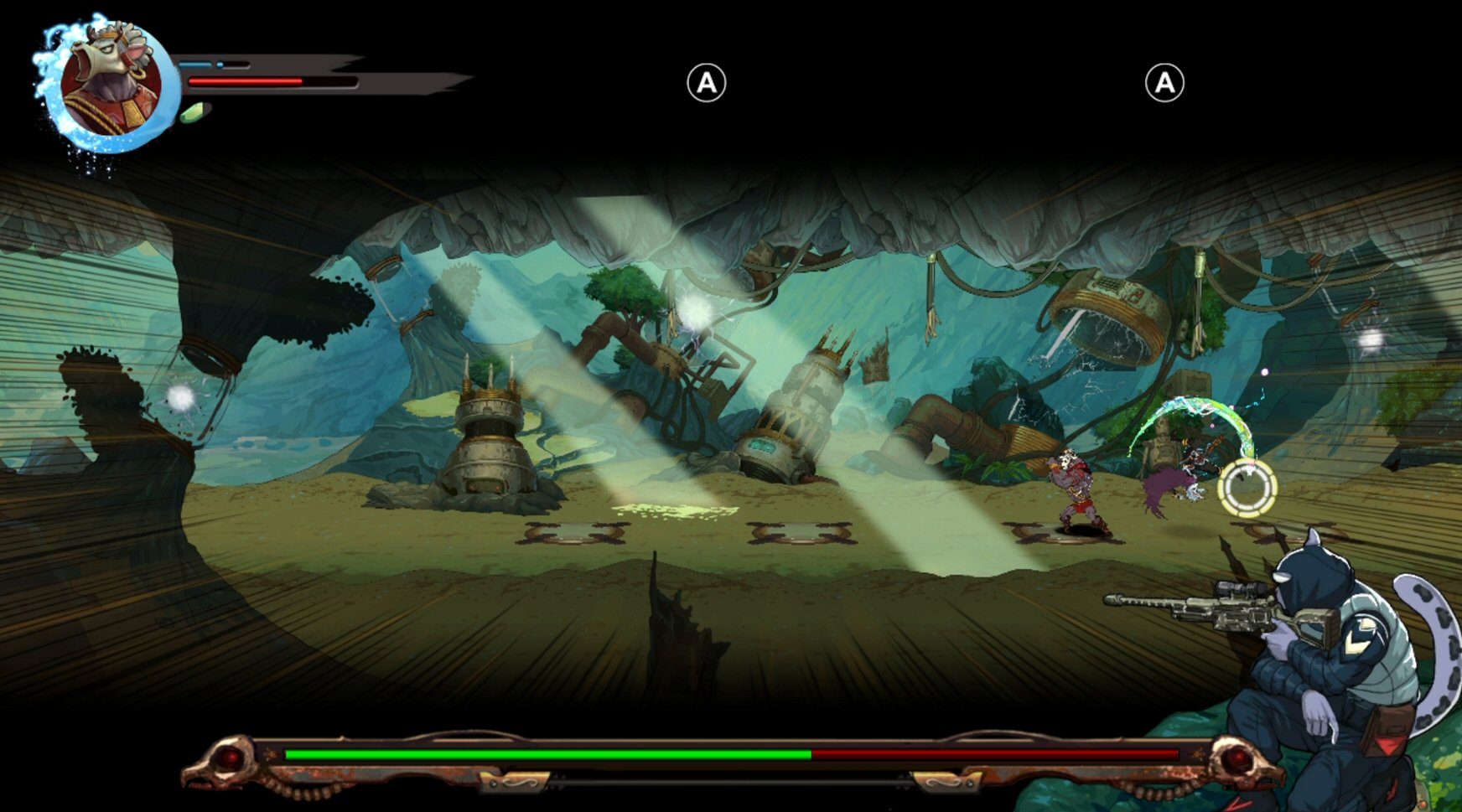 As we make progress through the story, we acquire various elemental powers. When we select to use one, they become a part of our attack. In some places, it’s useful to use a specific elemental power. For example, ice power can freeze water in some places, and the lightning power is good against machine enemies. These powers can also be used as powerful summons to kill all enemies on-screen, but it’s never obvious when you are able to use these and when not.

Generally, the fighting mechanics and character control are fine, although many other beat-em-up games handle it better, in my opinion. Most of the hits we deal with the enemies don’t seem to have a sufficient impact and majority of the time they simply shrug off our strikes and interrupt them with their own attacks. This makes chaining combos almost pointless most of the time and you instead resort to cheaper tactics, such as one-off dashing strikes and jumping strikes. Because of this, I found Kitsune character to be most useful in most parts of the game, since she is the fastest of the lot, and in this game, speed seems more important than power, with the exception of some boss battles. In some boss battles I found other characters more useful as they have a better reach or damage potential to pummel down the huge health bars that bosses have. 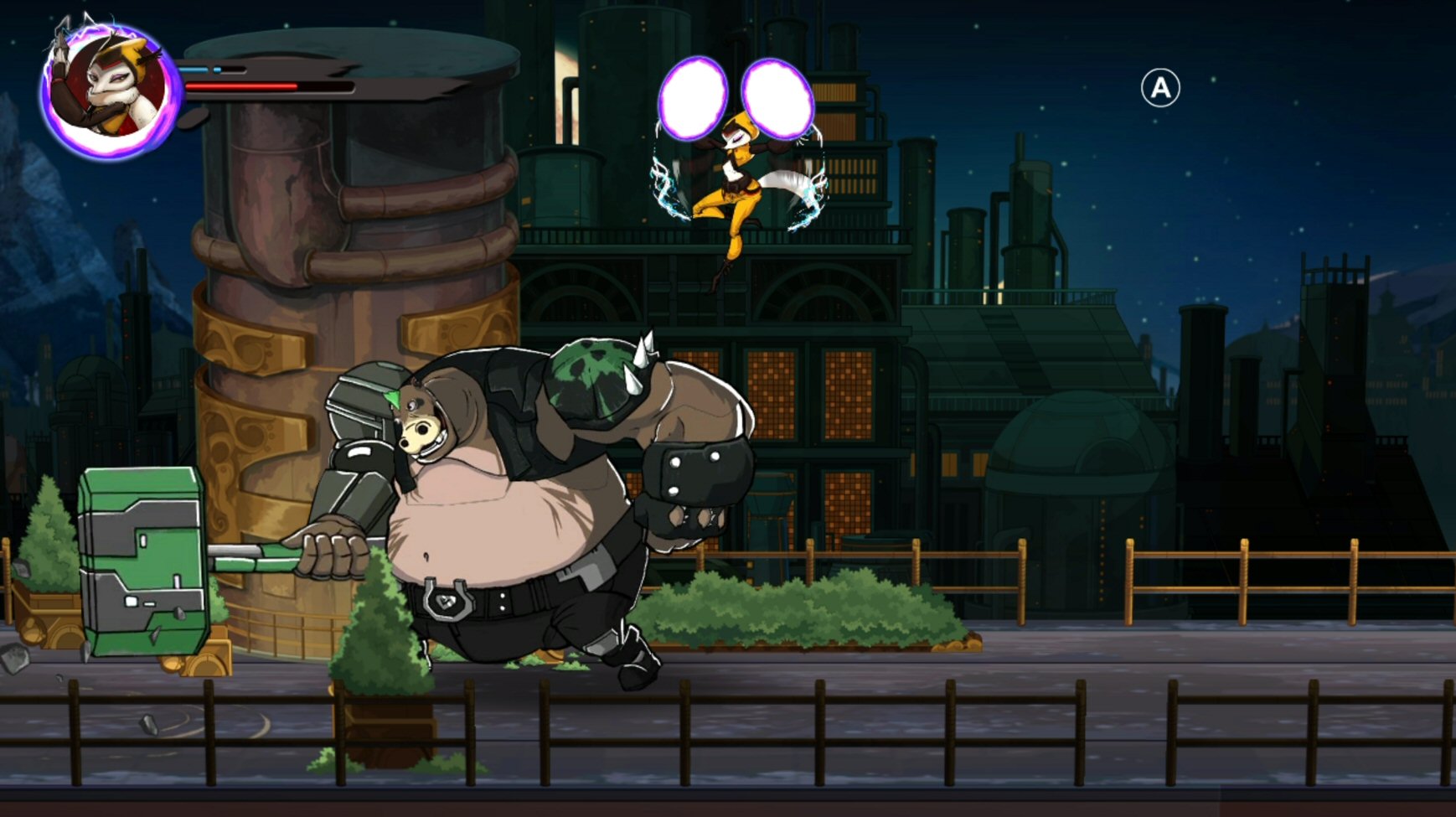 Boss fights are quite varied. We have a boss fight pretty much after every second level. There were some very interesting and fun bosses, such as the Kraken or the Gate Guardian, which had interesting attack patterns and didn’t feel cheap. A few of the bosses though felt cheaper than anything and with them, you’d just find their one weakness and keep spamming it till all of their health bars are gone (I’m looking at you, Iron Knight). Most bosses seemed fine enough. I found that if a boss seemed too hard with one character, then it’s worth trying with one of the others and that made a huge difference.

Some levels also have platforming sections. Most of those are quite straight-forward – jumping on crumbling bridges and platform, avoiding fireballs, or jumping between moving platforms. Most times I felt it to be a bit clunky though, as if the hitboxes between the character and the platform didn’t always agree with each other and the character did not jump onto something even though it’s clear they should’ve. A few sections with moving platforms were particularly frustrating (as can be seen in one part in the video above). Although most platforming sections were functional, they weren’t very smooth.

I’d strongly recommend using a gamepad to play this game as it makes the controls much more intuitive. 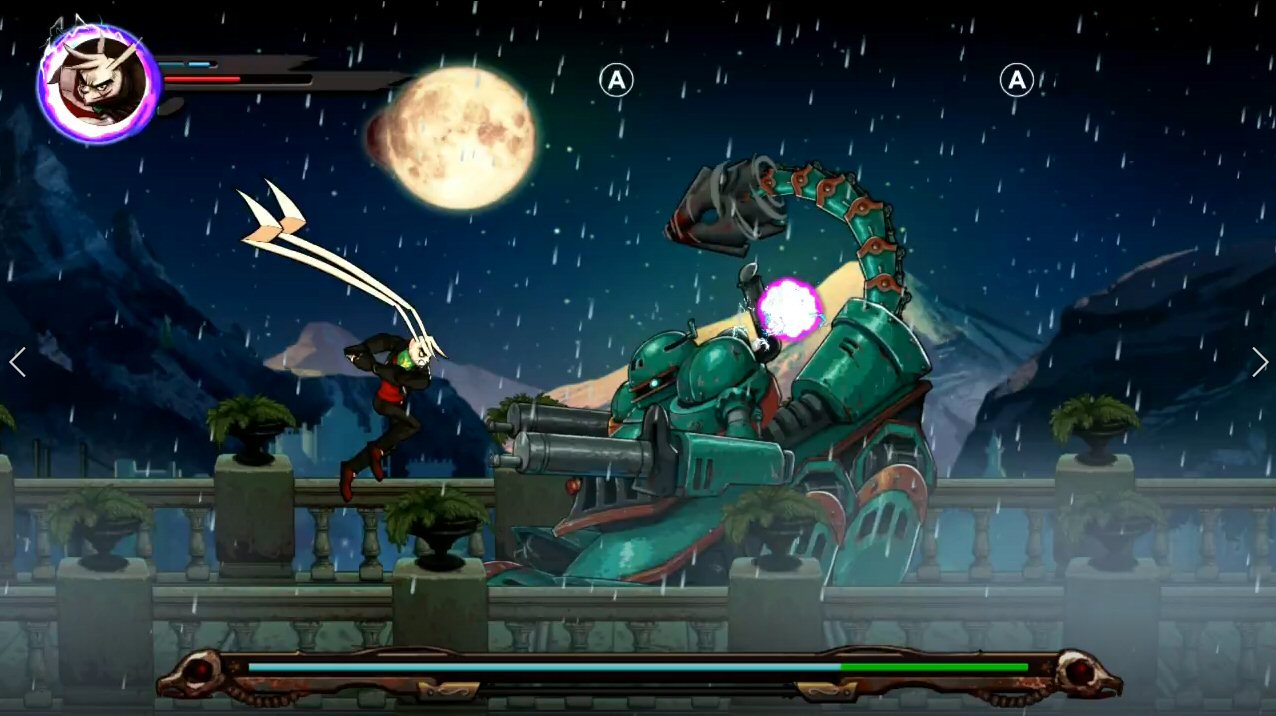 The visuals are one of the best parts of the game no doubt. They are colourful and the characters look like something out of a comic book. It looks a bit like what you’d expect if Kung Fu Panda was a game.

The environment of each level looks quite well-designed, detailed, and unique. Some have incorporated their parallax layers pretty well, such as during the Kraken boss fight, where the boss itself is located in the background while his tentacles are coming into the foreground, yet we can still shoot at his head and body with our sniper support character. 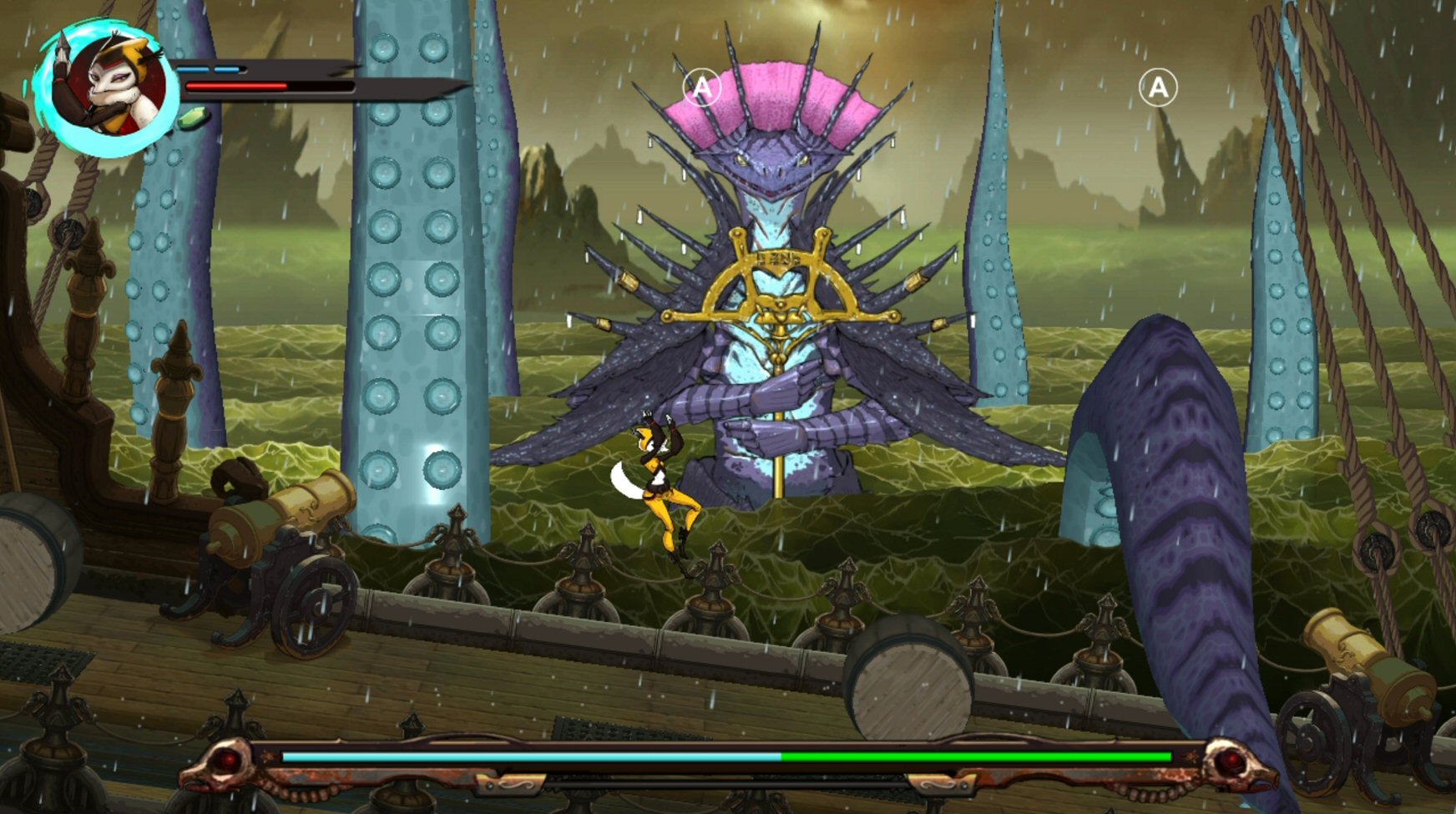 The way the aiming and transition work with the sniper and explosives support characters is also good. They are integrated into the flow of the gameplay pretty well.

The music is relatively good for the most part. In some levels, it’s kind of generic and nothing special while in others it’s more noticeable and fun.

Voice acting is kind of cheesy, but for a game like this, cheesy voice acting fits fine. Just don’t try to treat the story scenes too seriously. It’s more akin to how 80s cartoons sounded like. 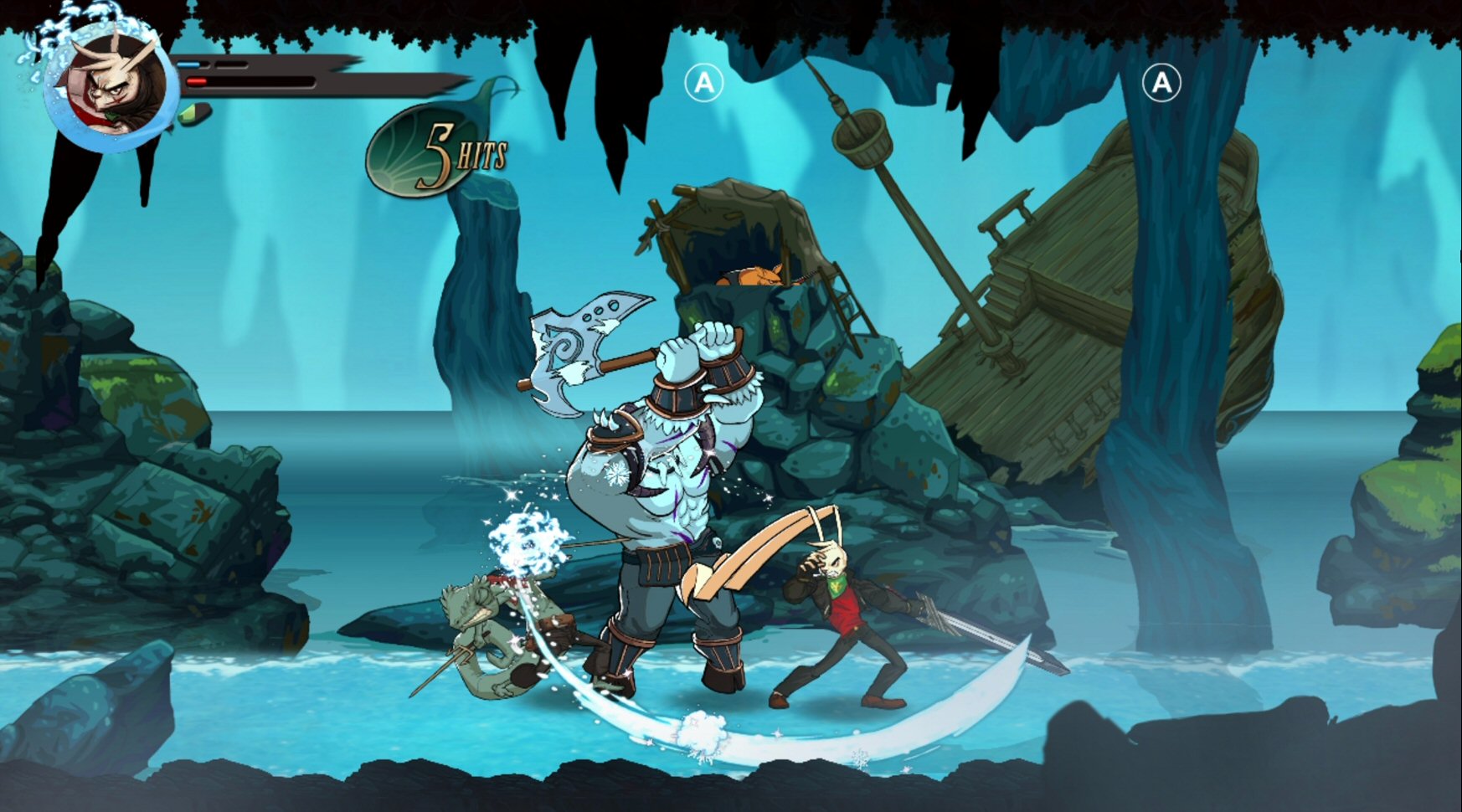 In general, ‘Dusty Raging Fist’ is playable and has some charm in places, but it also has a number of flaws and in some aspects feels very average. Its fighting can get repetitive pretty fast and the story isn’t really developed enough to be a good driving force to keep playing. Perhaps its best aspects are the colourful visuals, the setting full of anthro animals, and the concept of using support characters at times to shoot enemies down on the screen. I’ll give the game a ‘Save for Later’ rating but somewhat narrowly. There are certainly plenty of better beat-em-up games out there that you could play, some of which were released in the early 90s. Best to get this at a discount and only if the concept and setting of the game really interest you.