REVIEW: Interrogation: You will be deceived
Add comment
Share:TwitterFacebookRedditPinterestWhatsAppEmail

REVIEW: Interrogation: You will be deceived

Lead the special unit of police force, interrogate suspects, and bring down a rising new terrorist organization. Do you have what it takes?

‘Interrogation: You will be deceived’ lets us take on a role of a cop who’s been put in charge of a special unit to handle an investigation into a new terrorist group in the city. As we follow the trail, we are expected to interrogate various people who may or may not be involved with this group. At the same time we have to manage the morale of the team, engage with the press, and keep authorities satisfied enough so that they do not fire you. 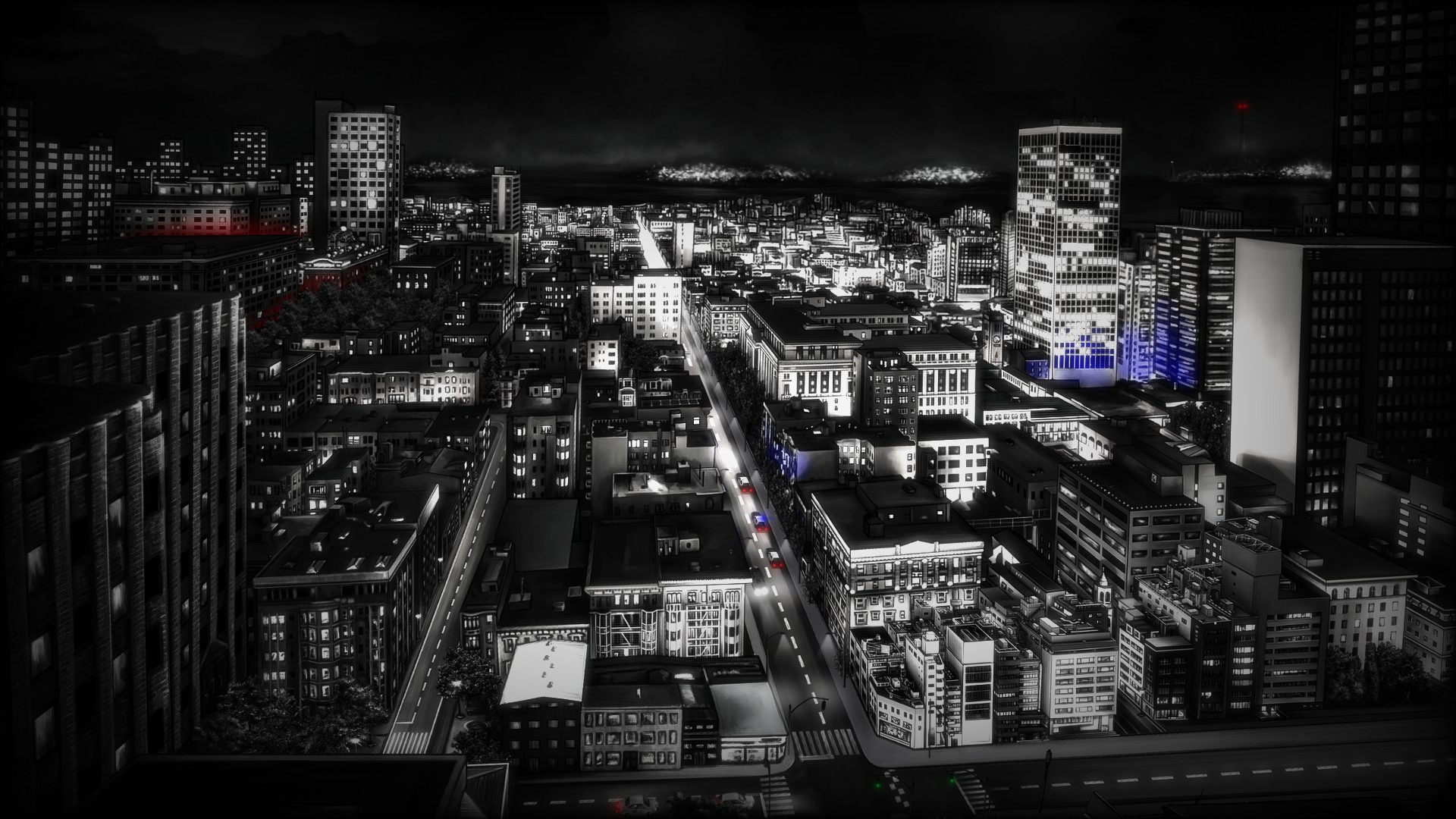 The story revolves around the rise of a new terrorist group with anarchic goals that calls itself the Liberation Front. Our police chief assigns us as the team lead on this case, and we are joined by a few other talented officers – a psychologist, a computer guru, and a field agent. Together with them, our job is to uncover the information about this organization, to stop it from committing acts of terror in the city, and to catch its leaders. 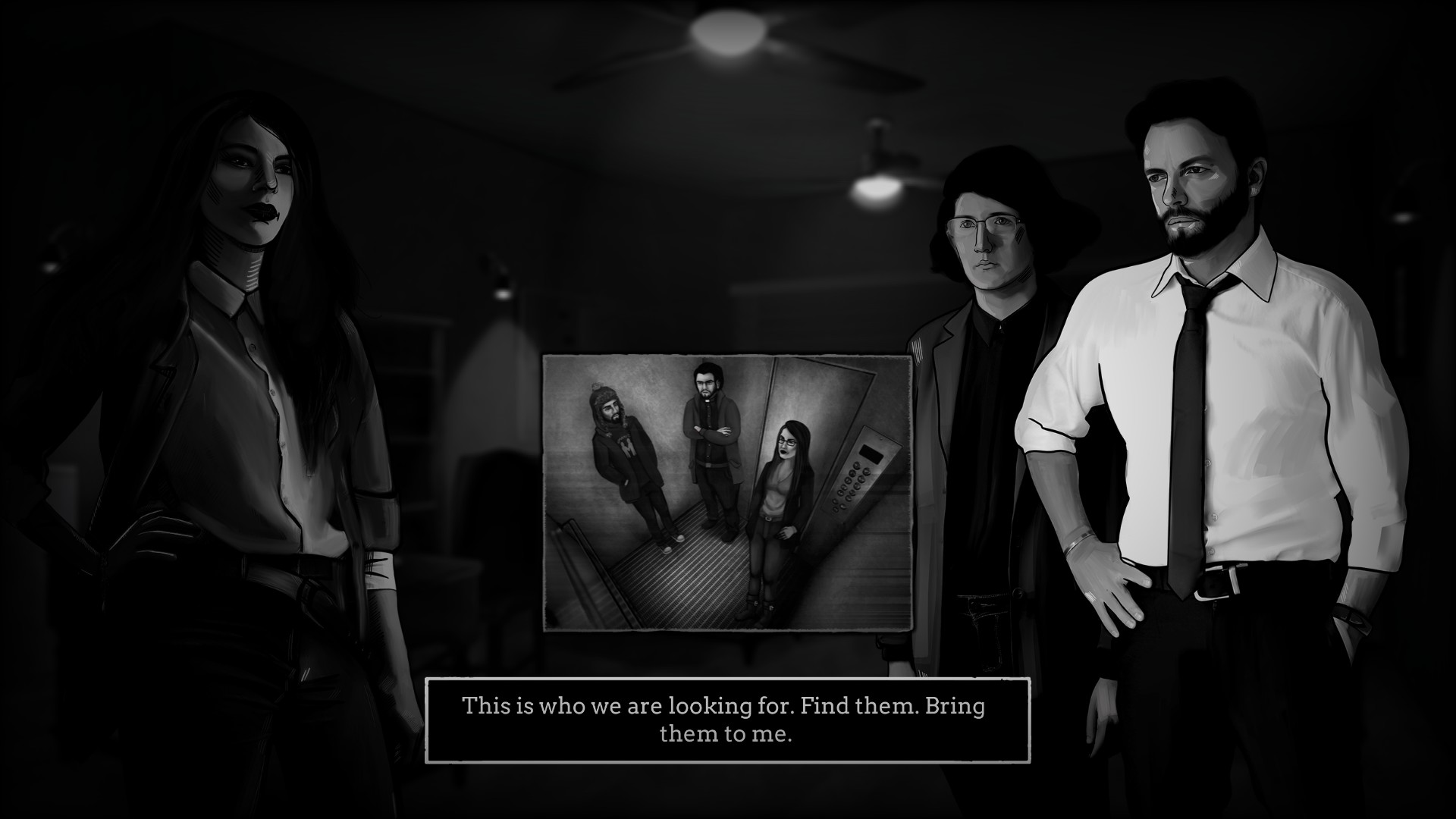 The game does a very good job at portraying this terrorist organization and making it believable. One can easily draw parallels between the radical ideology this group has to the extremists in the real world. It is clear that the devs have done a lot of research on extremist ideologies of the modern world and have based this fictional terrorist organization on these fringe groups, as well as showing convincingly how normal people can get easily enticed to support such a group over time.

The game also shows very believably the bureaucracy and red tape that police has to deal with when handling its day to day activities, being torn between the desires of the people, the press, and the authorities, all of which expect different things from the police. Gladly, we’re not alone in this, and throughout the game, we can enlist help from third parties, such as a retired police officer with past experience of dealing with terrorists, a professor specialising in radical ideology, a civilian informer, and even one of the criminals we put behind bars.

The game allows us to make choices at various stages, and so some degree of choice and consequence is present which influences some of the outcomes towards the end, even if most of it is shown as still images, photos, and reports rather than cutscenes. 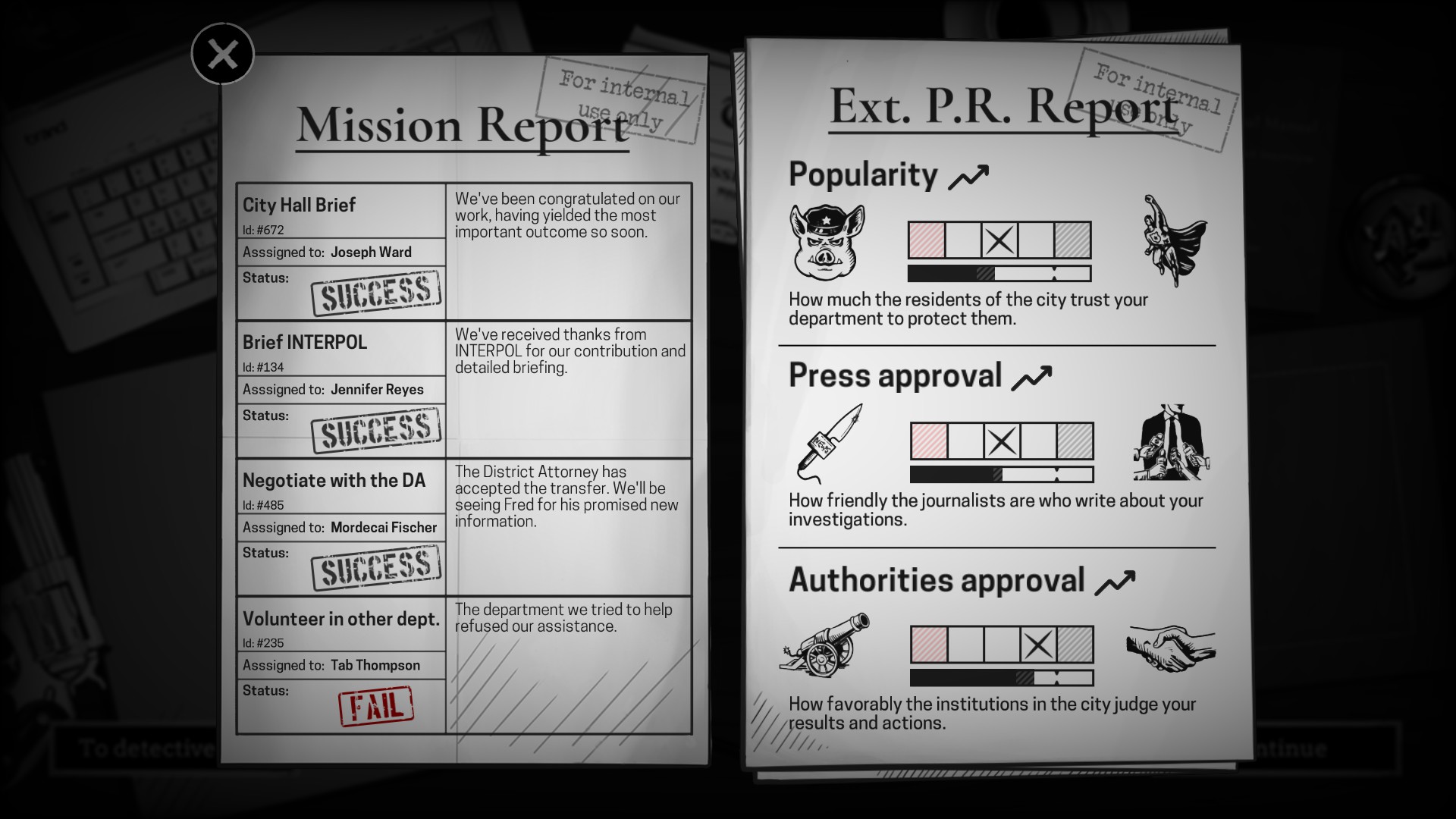 The gameplay is mainly divided into two aspects: the interrogations and the behind-the-scenes management of your campaign.

In the interrogations we have a goal of some kind, such as to gain important information to get the next part of the lead or to figure out which of the suspects is associated with Liberation Front. Most of the interrogations have us alternate between talking to 2 or 3 different people, and the information we get from one of them we have to use on the others, eventually cross-checking it to see who is telling the truth and who is hiding something. 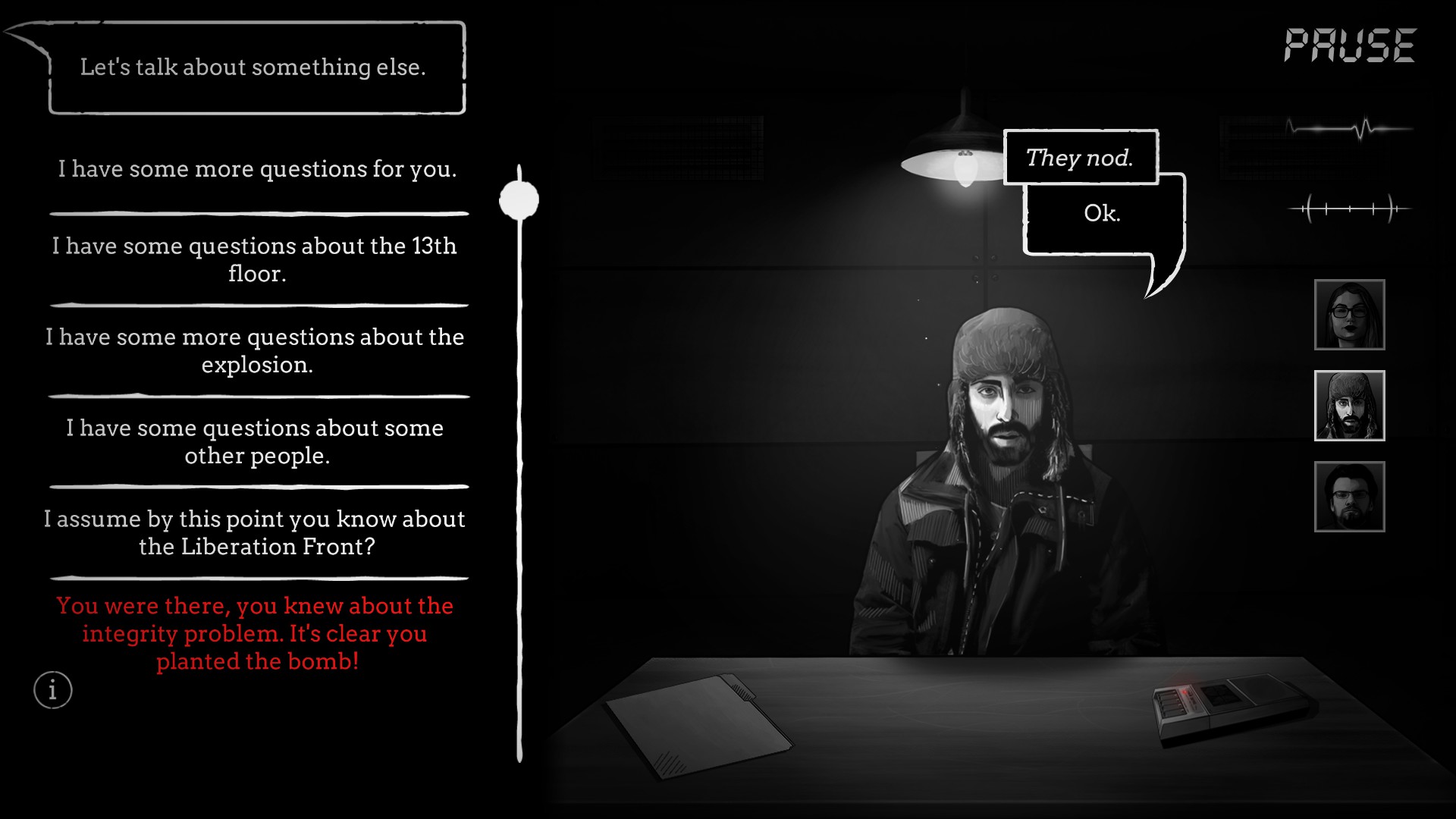 During each interrogation we get a lot of dialogue options, and what we say affects the suspect’s disposition. There are two main meters to keep track of – their level of trust in us and their pulse/fear. The right information can be gotten from them by getting at least one of those meters to a sufficient level (and at times both). So, we can either sympathise with them and gain their trust or we can intimidate them into a confession. Some of the questions the suspects will evade answering or will lie about unless certain amount of trust or fear has been built, so at times we have to come back to previous questions and see if the suspect has opened up more to us to answer those.

What I liked is how immersive these interrogations feel, and how it’s not always clear who might be hiding the information from us. Some of the interrogations take interesting approaches, such as a hostage situation which we have to handle over the phone at one point, or a time where we’re the ones being interrogated, so it’s not all the same, and every single interrogation feels fresh and enjoyable. Although a few can feel like they’ve outstayed their welcome and a small number of the interactions can feel a little hard to believe.

Some interrogations have time limits, although time is not ticking down live, but rather on a turn-based sense. Every time we choose a dialogue option, the timer ticks down a bit, so essentially it’s just a limit of how many questions we can ask in those interrogations before we lose. This adds a fair bit of difficulty and could result in us needing to retry some of the interrogations. Gladly, if we fail, we can start right from the beginning of the interrogation and do not lose any save progress. 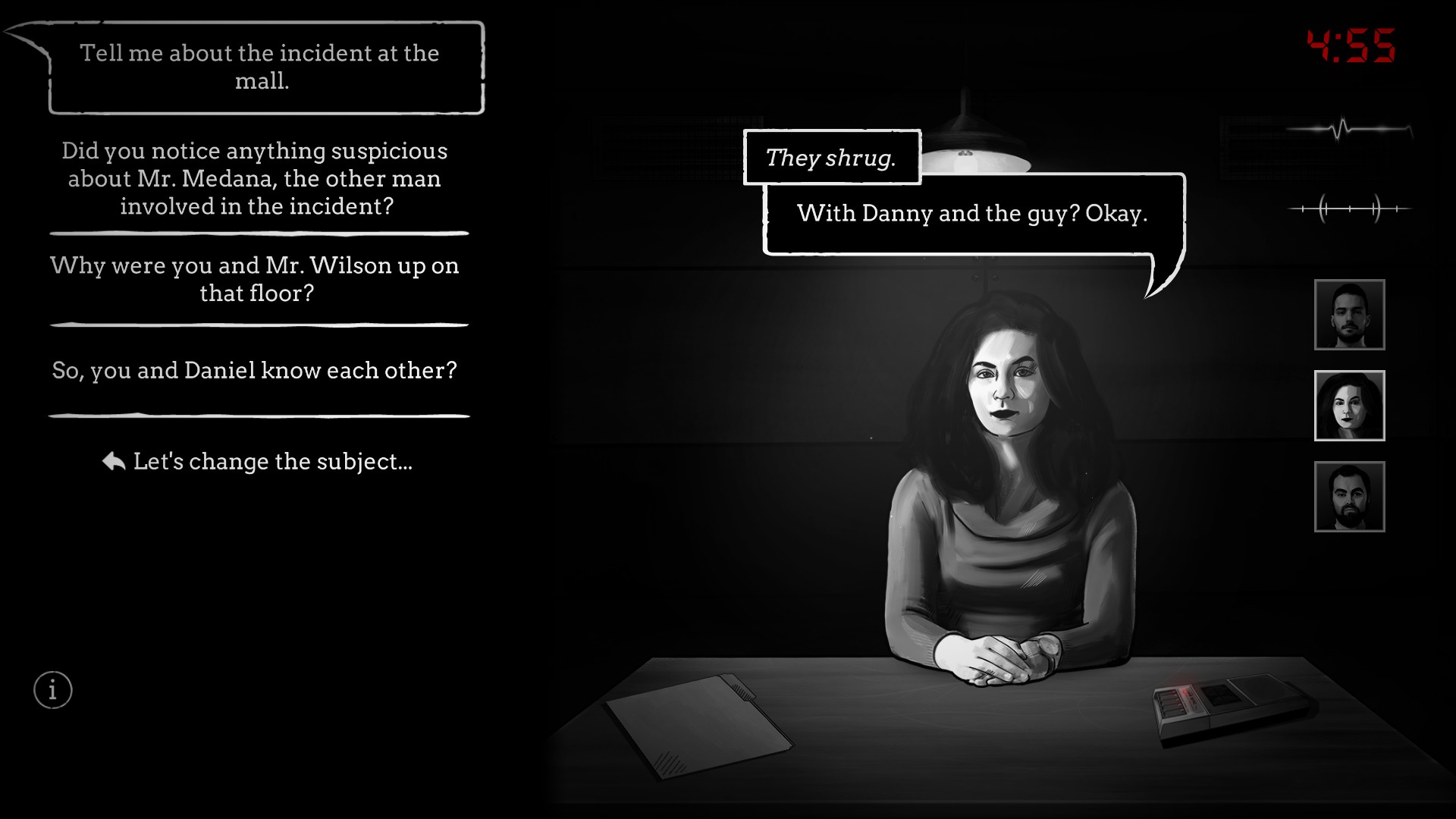 As a last resort, we also have the option to beat the life out of suspects to get a confession out of them, although this can get us in trouble with the superiors.

The behind-the-scenes management of our operation also feels immersive and has a lot of elements to it. Firstly we get to assign our team to specific tasks. Each team member is suited differently to each task. For example, a teammate who is good with computers and writing up reports will have a high success rate when it comes to organizing things and keeping things by the book at the station, but if you assign them to a job where they have to use charisma and do negotiations, then their success rate will be much lower at it. The teammates also have morale, which affects the success rate of their tasks, so we have to take their needs into account and not let their morale drop too much. 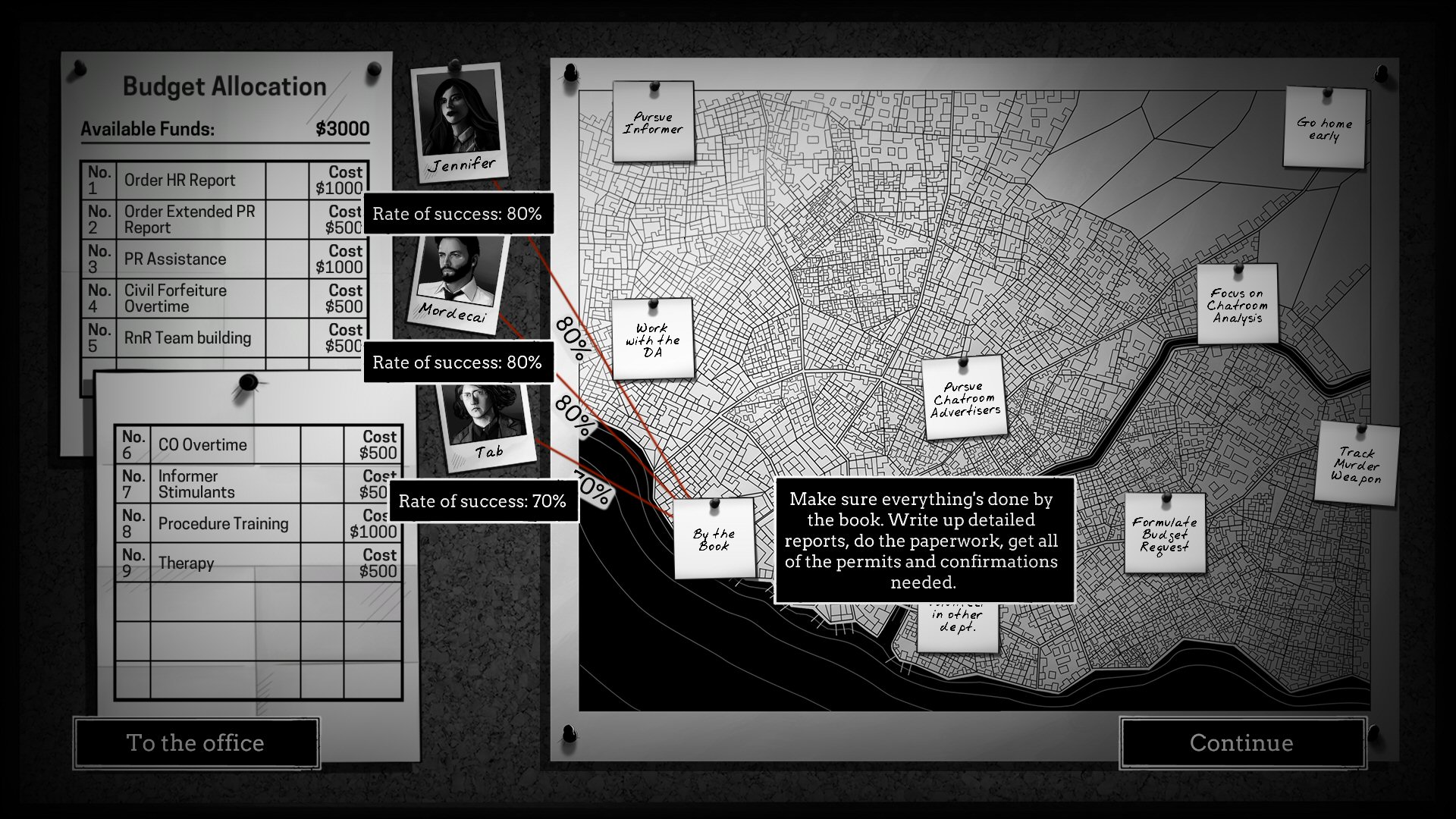 We also have to engage with the press on a regular basis. After every interrogation, we do a press release, where we can choose some of the phrases to be printed for the public. But on some occasions during the story we also get directly interviewed by reporters and asked various questions about the ongoing campaign. All this affects our standing with the public, the press, and the authorities, and this is important. If our standing with any of those hits rock bottom and stays that way, we can end up getting fired or even assassinated (from what I’ve seen mentioned on Steam forums). Of course, it’s no easy task trying to appease all of them, as oftentimes they want entirely different things. For example, the public wants us to be tough on crime and keep it safe, the press wants insider information on each case, and the authorities want to keep things hush-hush and by the book. 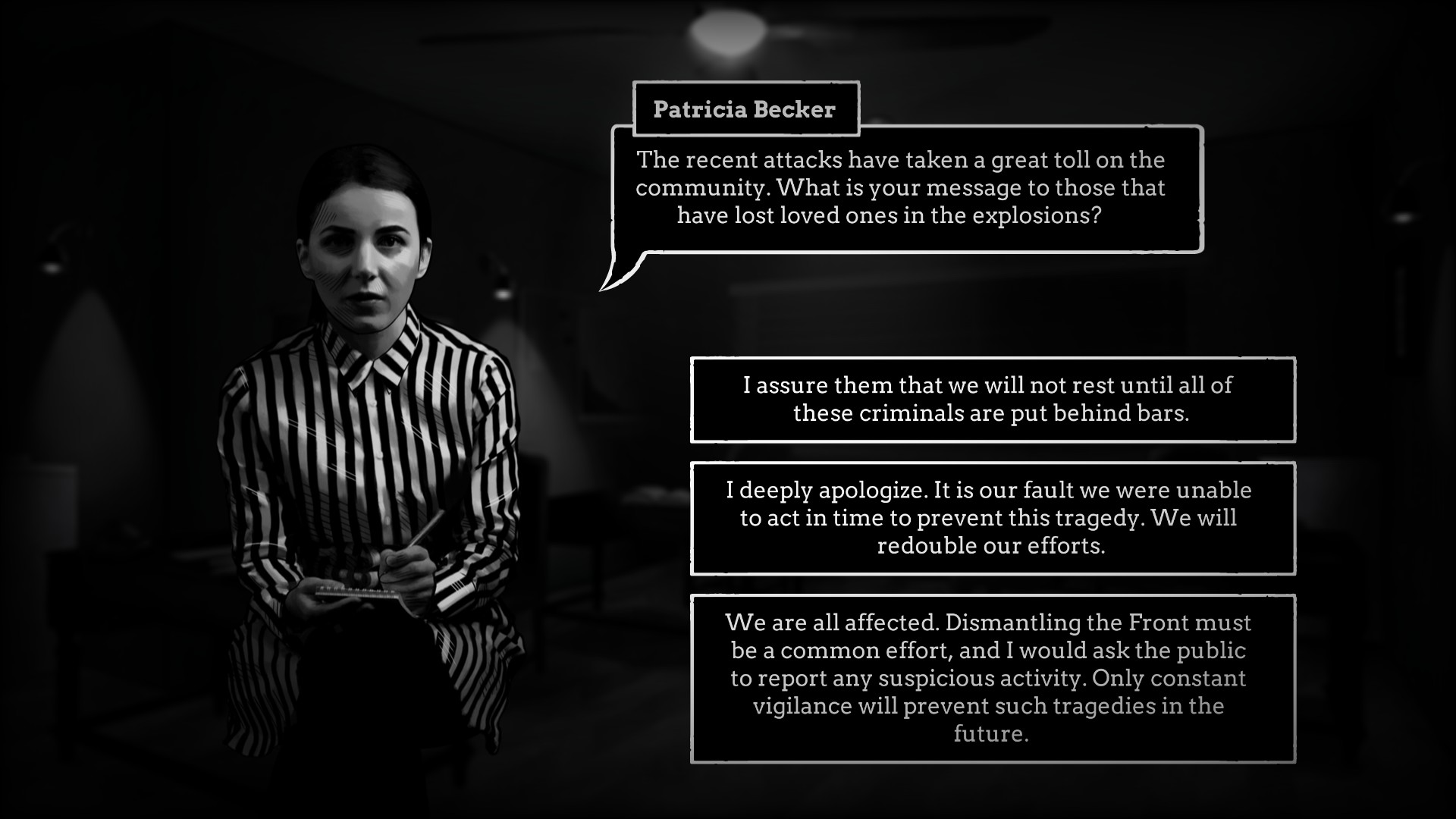 At a few parts of the story we can also acquire some perks to give us an advantage in certain aspects of interrogations. For example, a statistician perk unlocks occasional dialogue options that allow us to use statistics to convince the suspect of our point of view. Or the ideology expert opens some dialogue options to allow us to sympathise with the suspects who may hold extreme views, hence winning their trust more easily. There are also perks that improve our brutality options during interrogations.

The game has a very interesting visual presentation in the noir style, using mainly black and white colours. The characters all have been directly designed after actors, which adds to the feel of them being like real people. Their animations have stylistically irregular movements, which looks good strangely enough and enhances the retro noir vibe. Their facial expressions often change based on what you say to them, which is a nice touch too.

Most of the game does take place within the menus – either in the dialogue menus or on specific screens in the office where we make our campaign plans and assign team members to their tasks. In that sense, there’s no fluff content present. You do not need to waste time walking from office to office in between.

The music has a nice ambience to it, and during interrogations, it can feel quite intense and does a great job at enhancing the urgency and the stakes of what’s going on. There is no voice acting in the game, however, which to some people will be a good thing, while to others a bad thing. So, if you don’t mind reading through the dialogue lines, then you shouldn’t have trouble with the game. 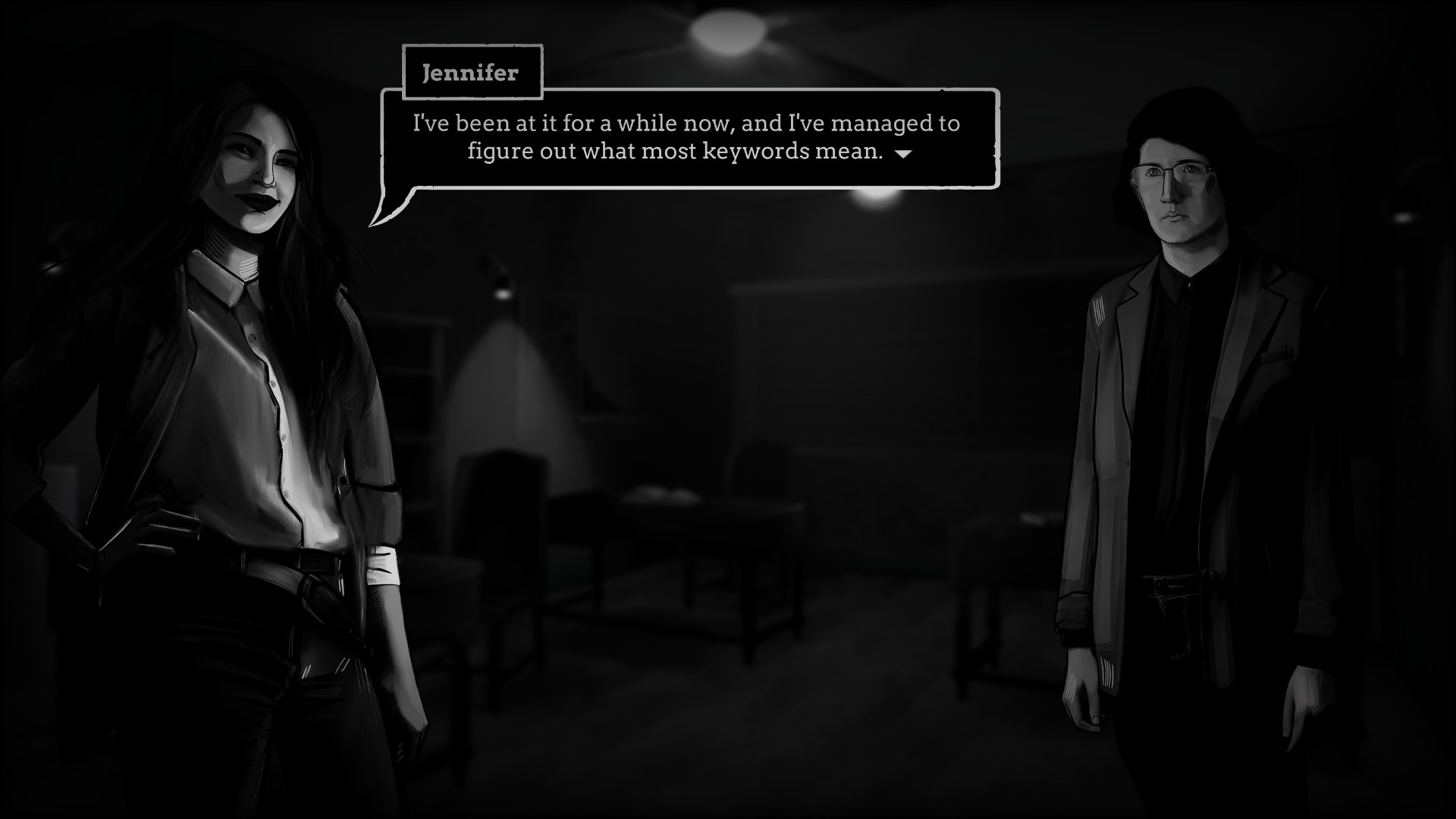 ‘Interrogation: You will be deceived’ is an engaging and unique game that easily stands out with its gameplay idea and visual style. It has a lot of depth and great world-building. It does a superb job at developing every single character in the game, those who are allies and those who we interrogate. It gives them all a personality, background, likes and dislikes, and motivations. It gets that inner psychologist within you have a field day.

I think it’s easily not for everyone because it requires patience and does not try to captivate the player with flashy stuff. If you’re not fond of reading dialogue lines and if you don’t like politics in your games, then it’s not for you either. But if you like a management-style game with a story about police campaigns, detective work, and political ideologies, then don’t miss this hidden gem.