An alien planet, a mysterious plot, a cute heroine, and epic gunfights – welcome to Everreach, an indie sci-fi RPG.

We take the role of Nora Harwood, the leader of a small security squad being sent to an alien planet to oversee the colonisation process. Upon arrival, we are greeted with in-fighting and manage to take cover in one of the outposts with other military personnel who brief us on the situation on the planet. It becomes clear very quickly that something bad has happened in other outposts and now former allies are attacking us in full force, for which reason remains unclear. And so with that in mind, we have to get to the bottom of this mystery and fix this mess. 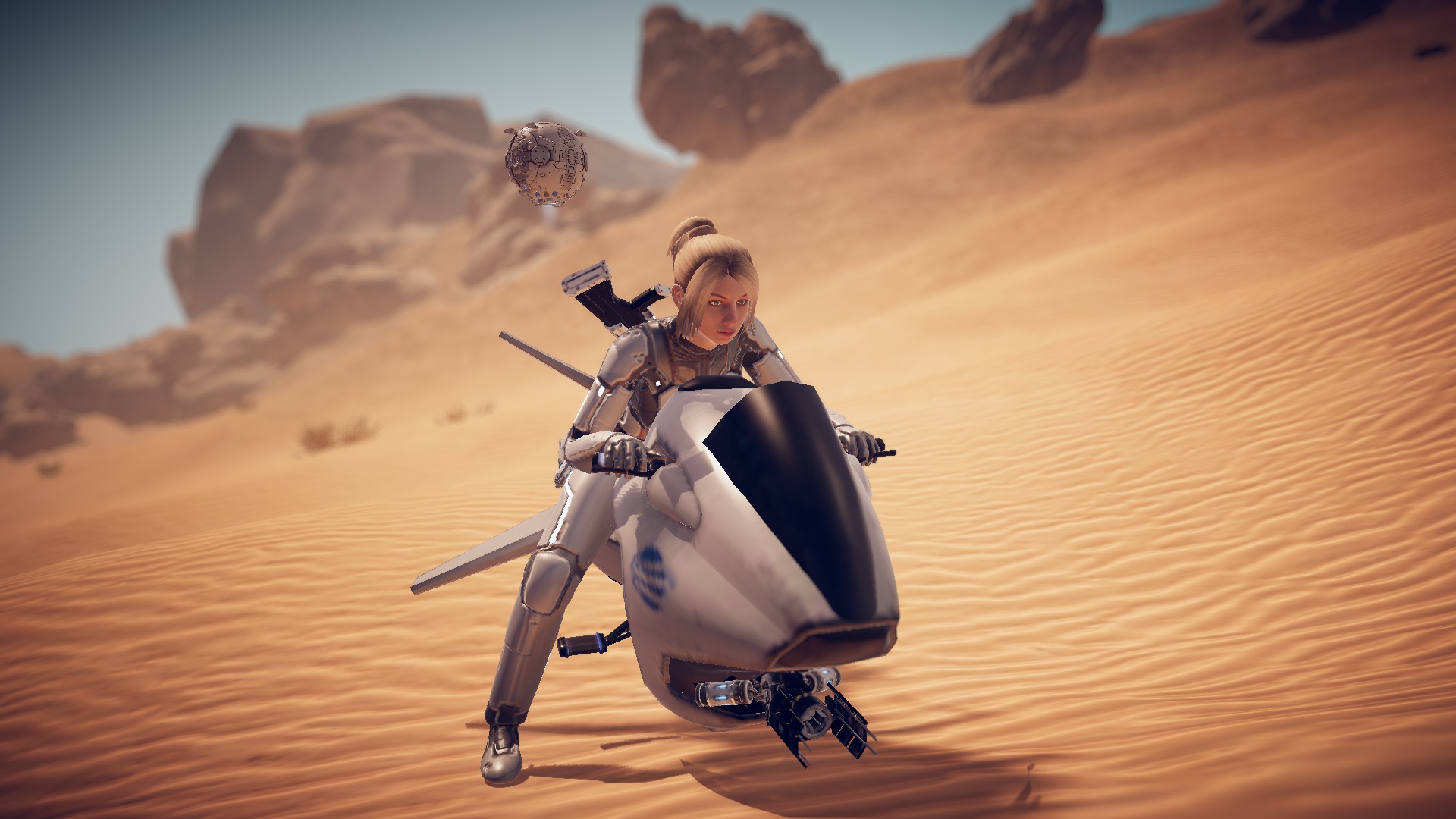 The Story and Role-playing

I personally really enjoyed the story and the premise. Although it was not particularly grand on an epic scale and involved only a small number of leading characters, it managed to stay intriguing throughout and ended with a bang. There was some mystery present, at times requiring us to read through datapads left over by people in abandoned outposts, and other times getting interesting revelations through voice recordings. Although we only saw a small glimpse of this setting over the course of the game, I am interested to see more of it in the future. Perhaps it’s no surprise the quality of the main story is pretty high since it was written by one of the writers behind Mass Effect games.

The main character we play as is a young squad leader with a generally likeable personality. Even though for a game like this it would’ve been nice to delve more into her background, at the very least she was not an angsty Mary-Sue with constant existential problems as seems to be a common depiction of female heroines in games. 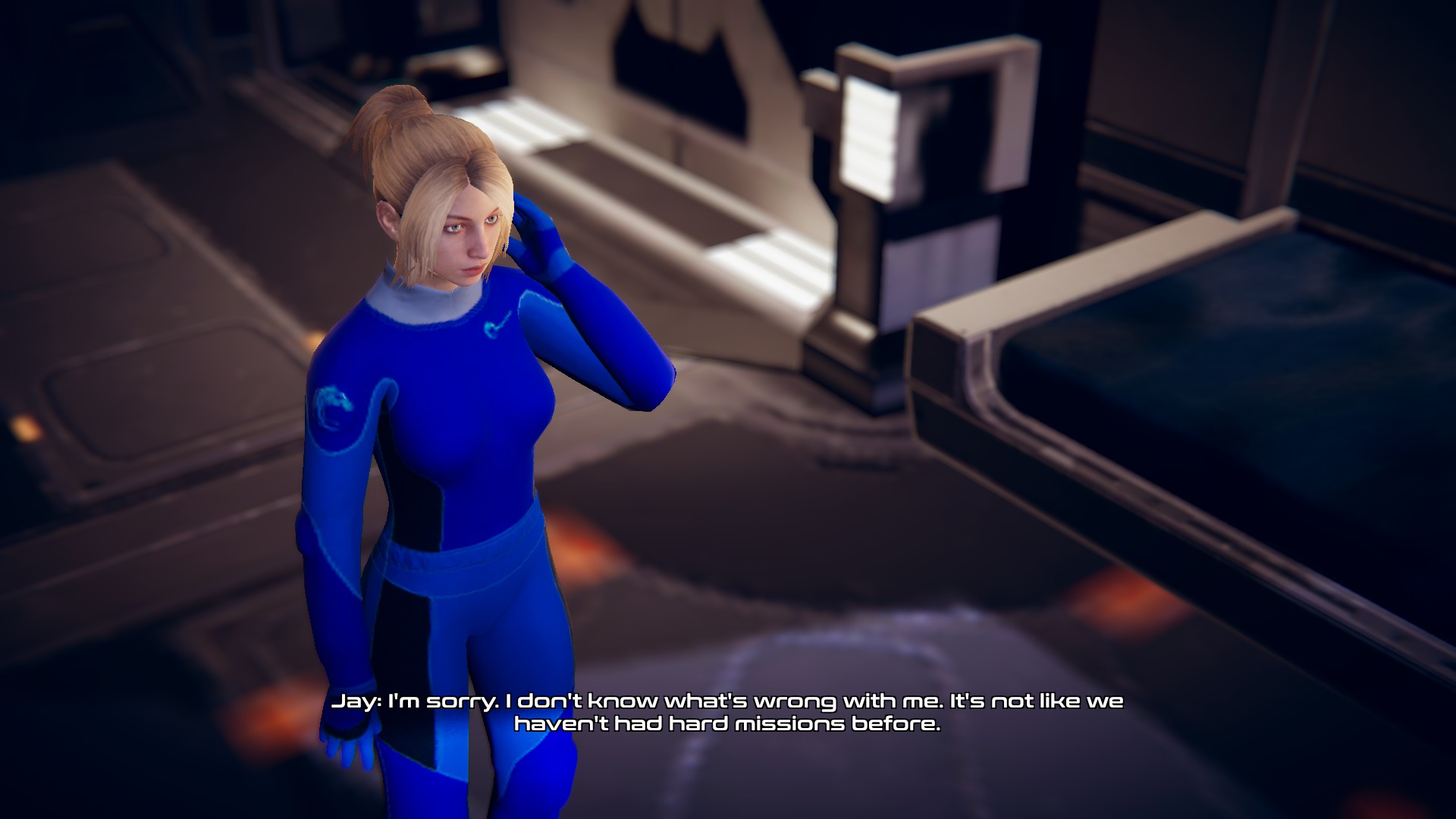 For most of the game we have a small, hovering technician robot sidekick accompany us with a rather dry and somewhat eccentric sense of humour. This robot sidekick, called 73-Q, often provides commentary during the missions and new developments, sometimes being helpful and other times simply lightening the mood. 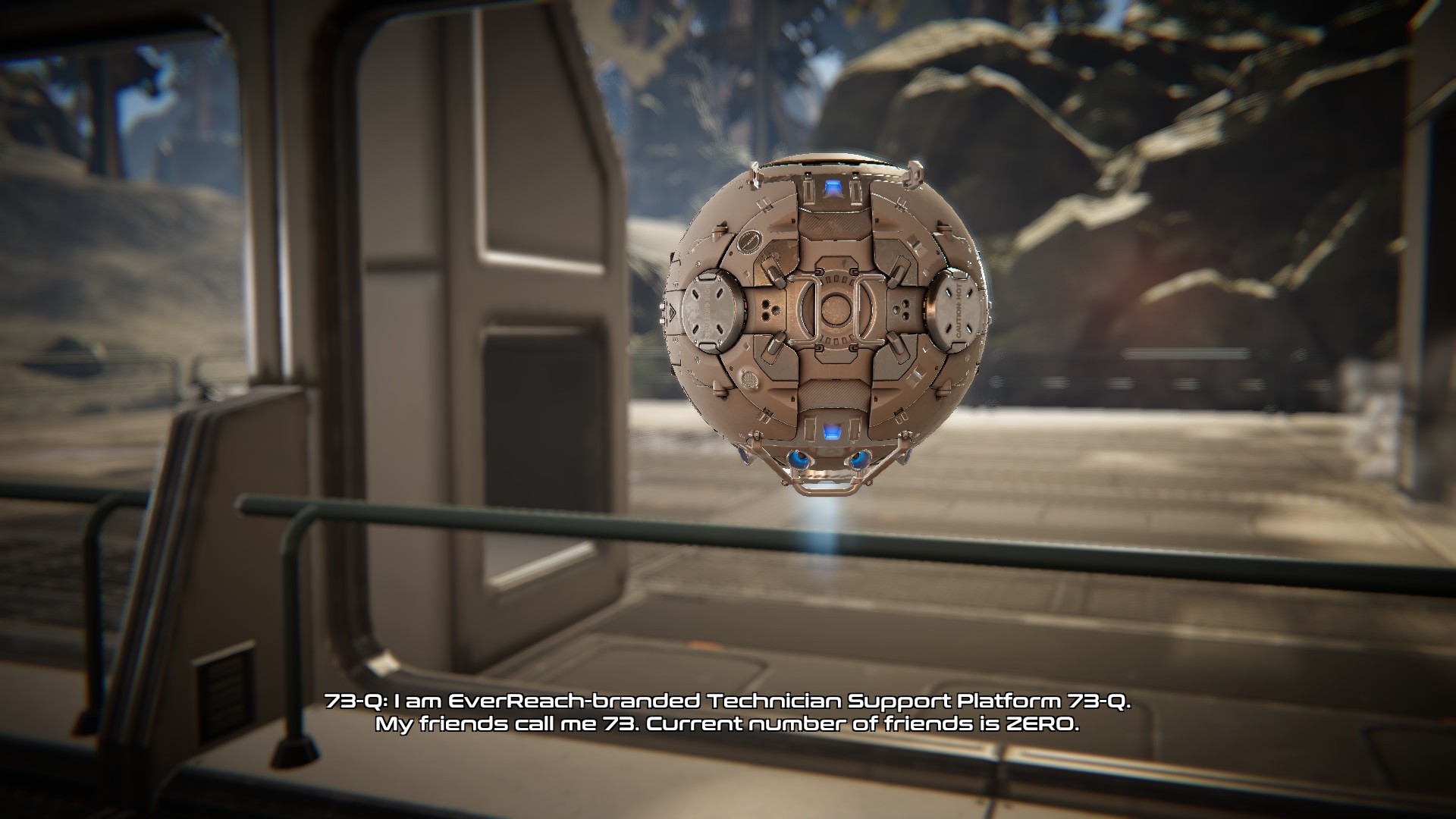 A few other prominent characters that help us were Abigail, the overseer of the outpost, Julian, a journalist with some hacking skills, and Jay, a childhood friend and squad partner of the main heroine who crashlands elsewhere on the planet and manages to make occasional contact with us via the radio. Although all were likeable characters, I think they could’ve had some more screen time and character development, especially Jay, who we barely see but who knew our leading heroine since childhood.

In some places the game had us make choices, usually during dialogue scenes, but there were occasional decisions to do when on the field too. Although the story largely remains the same regardless of your choices, some minor aspects change, particularly closer to the end, and could offer a bit of a replayability factor. 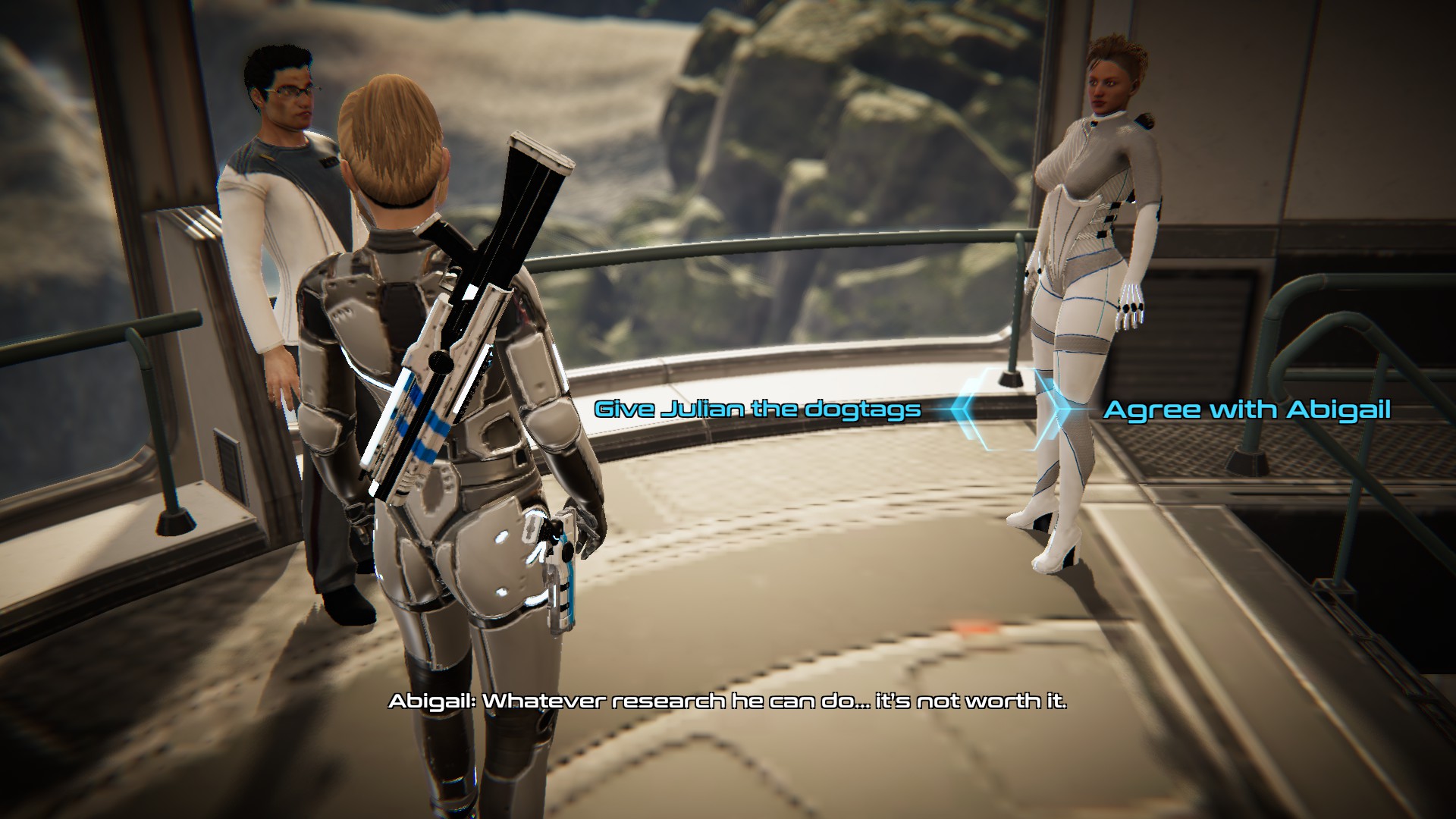 Gameplay is very much like most 3rd person shooters. We explore the area, come across a group of enemies, and exchange gunfire with them till they’re all down. Most of the enemies we face are either soldiers or hovering military drones. Although this combat gameplay is somewhat fun, it’s a bit basic and doesn’t change much over the course of the game. We only have two weapons – an assault rifle and a pistol, and we have them for the entirety of the game without getting any other weapons. In addition, the game doesn’t really have a cover system as some other games of this type. So you have to manually hide and avoid enemy gunfire and hope that none of your hitboxes are sticking out. So, if you are looking purely for a fun and diverse 3rd person shooter, this game is unlikely to tick that box. I don’t think top-end combat mechanics were ever a focus of this game. 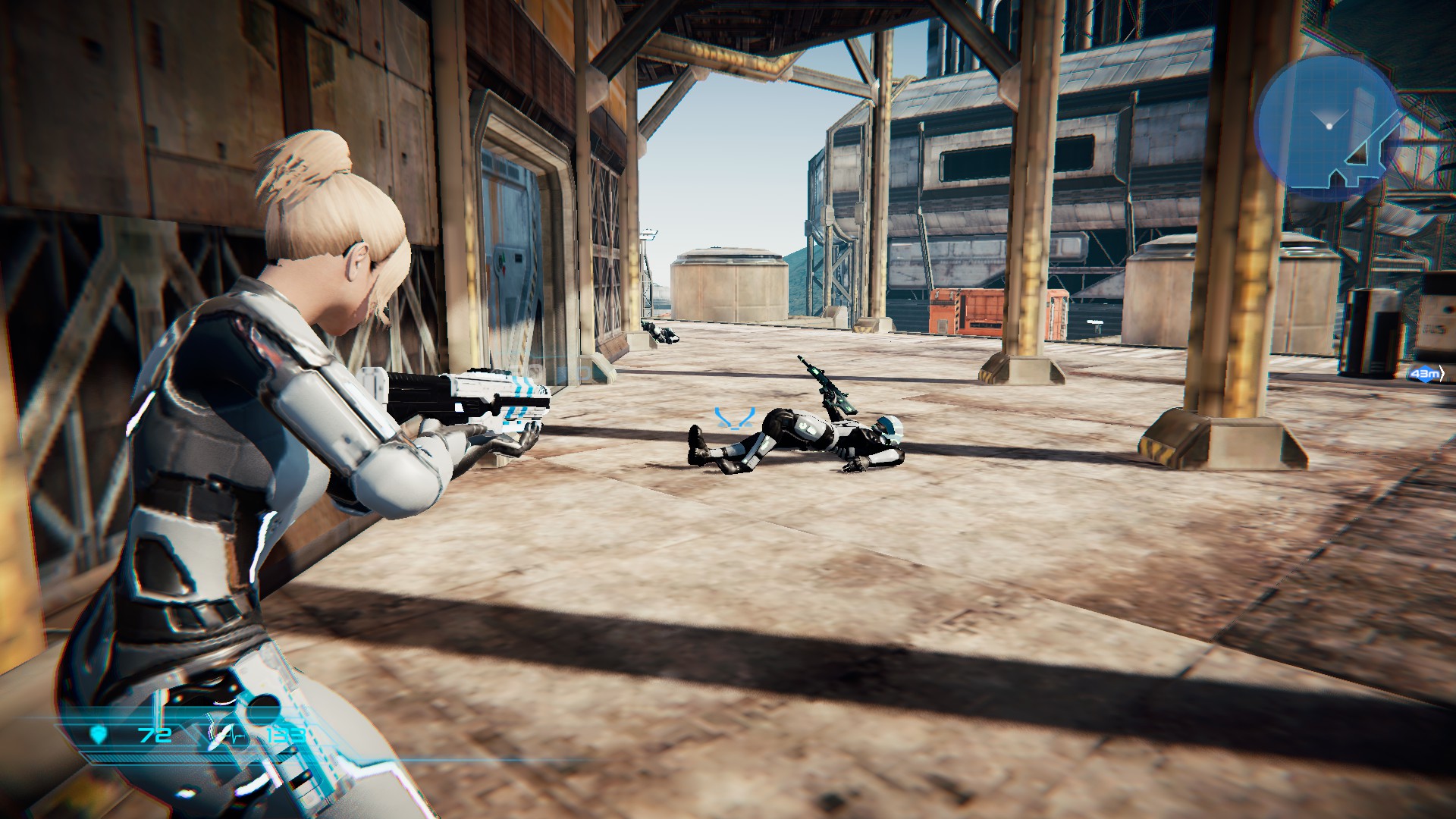 We do get to improve our core attributes (strength, agility, intelligence) and unlock some new buffs and skills as we find useful materials, so this offers a bit of a variety. However, most of the skills in the skill tree are passives, which increase our HP, our shields, regeneration, sprinting duration, weapon damage, and so on. There are a handful of active abilities that can be used in combat, but they are further along the tree and you might only get around to one of them in a single playthrough. 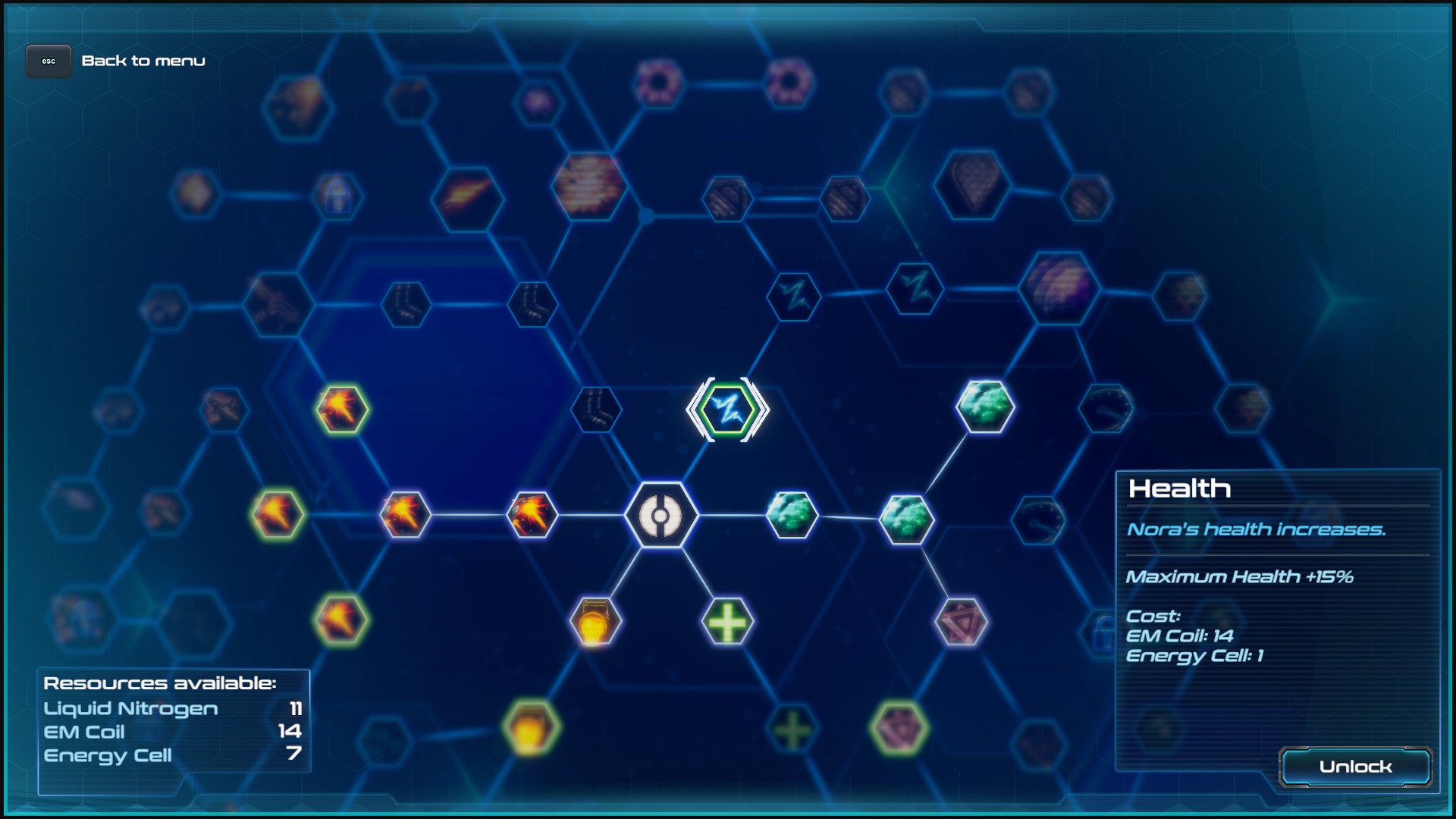 Most of the upgrades in the upgrade tree are gated by attribute requirements, so upgrading attributes via levelling up is important. For example, to unlock shield upgrades, a certain number of points in Intelligence would be required. 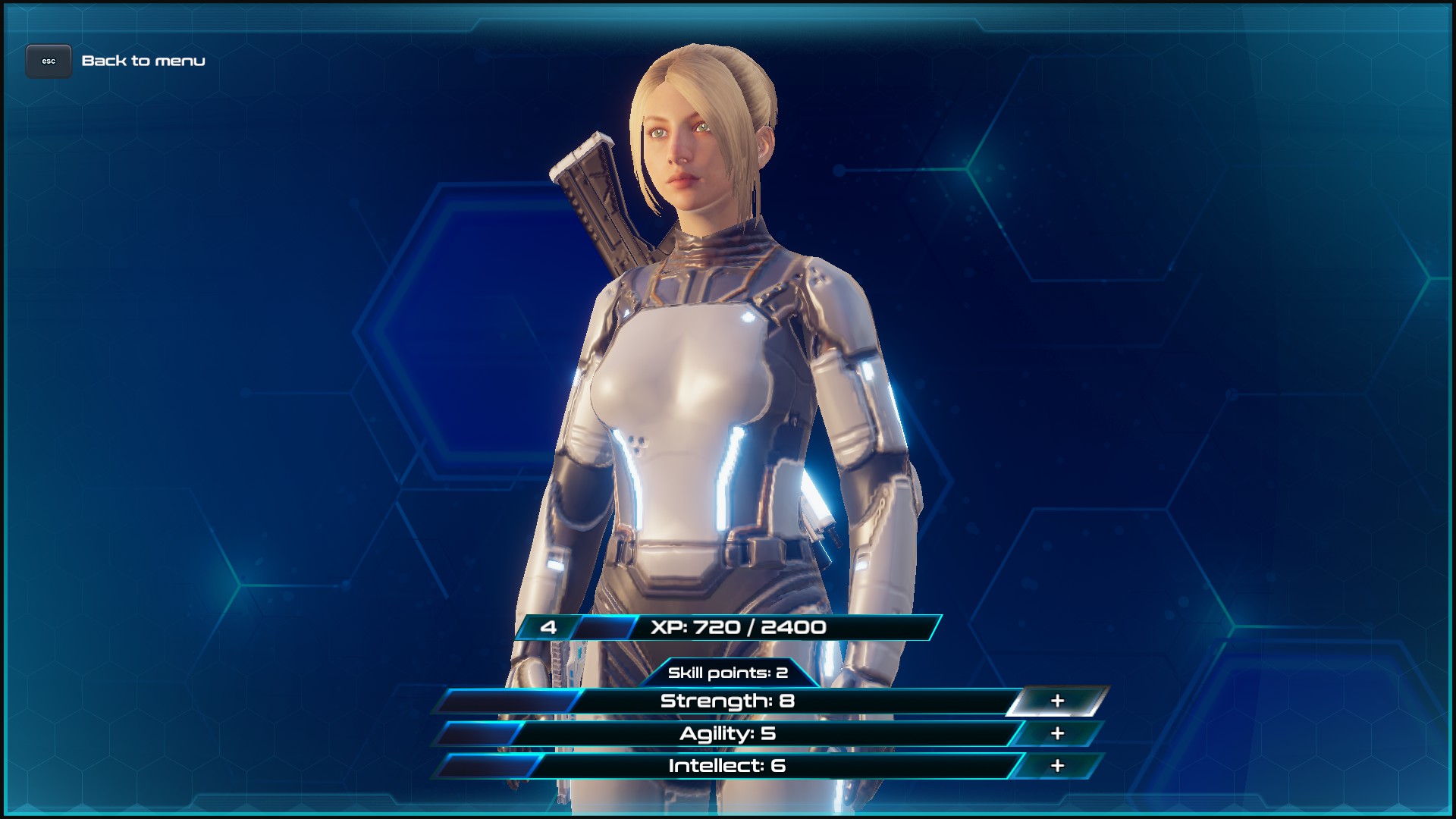 Some parts of the game have us riding a hoverbike, and there are some combat sections and chase sequences that happen during these times. Some are pretty fun, while others can be pretty annoying and have a high difficulty spike, especially if you are being chased into a narrow area with rocks and trees sticking out of every corner. So, some of these parts can be a little annoying, especially if you’re not a fan of fast-paced sections in games. 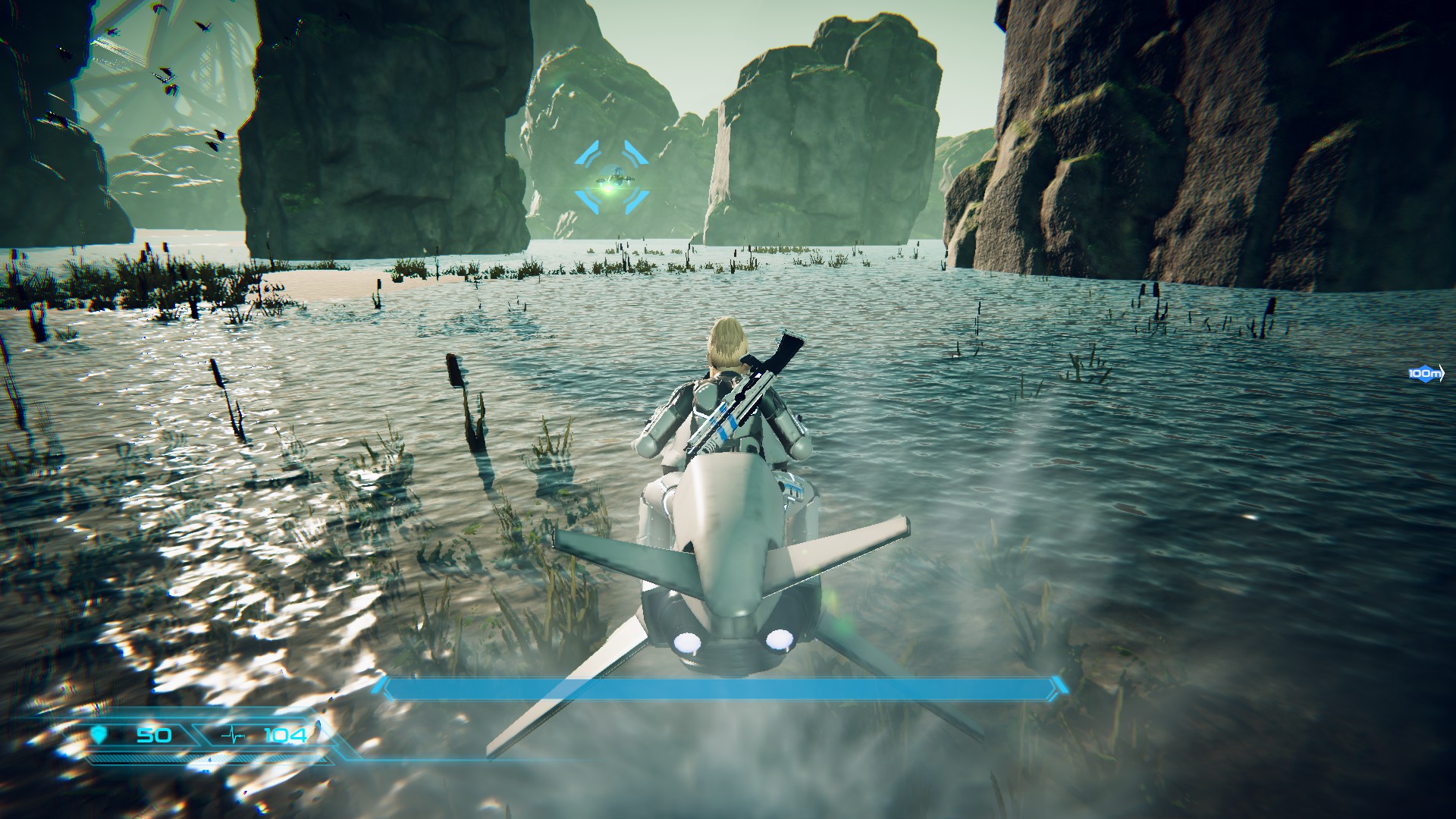 Now, we can’t have a sci-fi RPG without a hacking minigame, so yes, there is a hacking minigame here too. In fact, there are 3 different types of hacking minigame here, which come up from time to time when we try to unlock some of the supply crates. For example, one type of hacking minigames requires us to connect all the vertices of a 2D shape and to do so within 30 seconds. This one can be quite hard as 30 seconds is usually not enough to think some of these solutions through, and once the time is up, you cannot retry. The others tend to come at a mixture of difficulties, some being pretty easy, while others are super hard. You don’t lose much though if you fail to unlock a crate. Only a small portion of crates requires hacking to be unlocked, and they only contain upgrade materials and ammo. 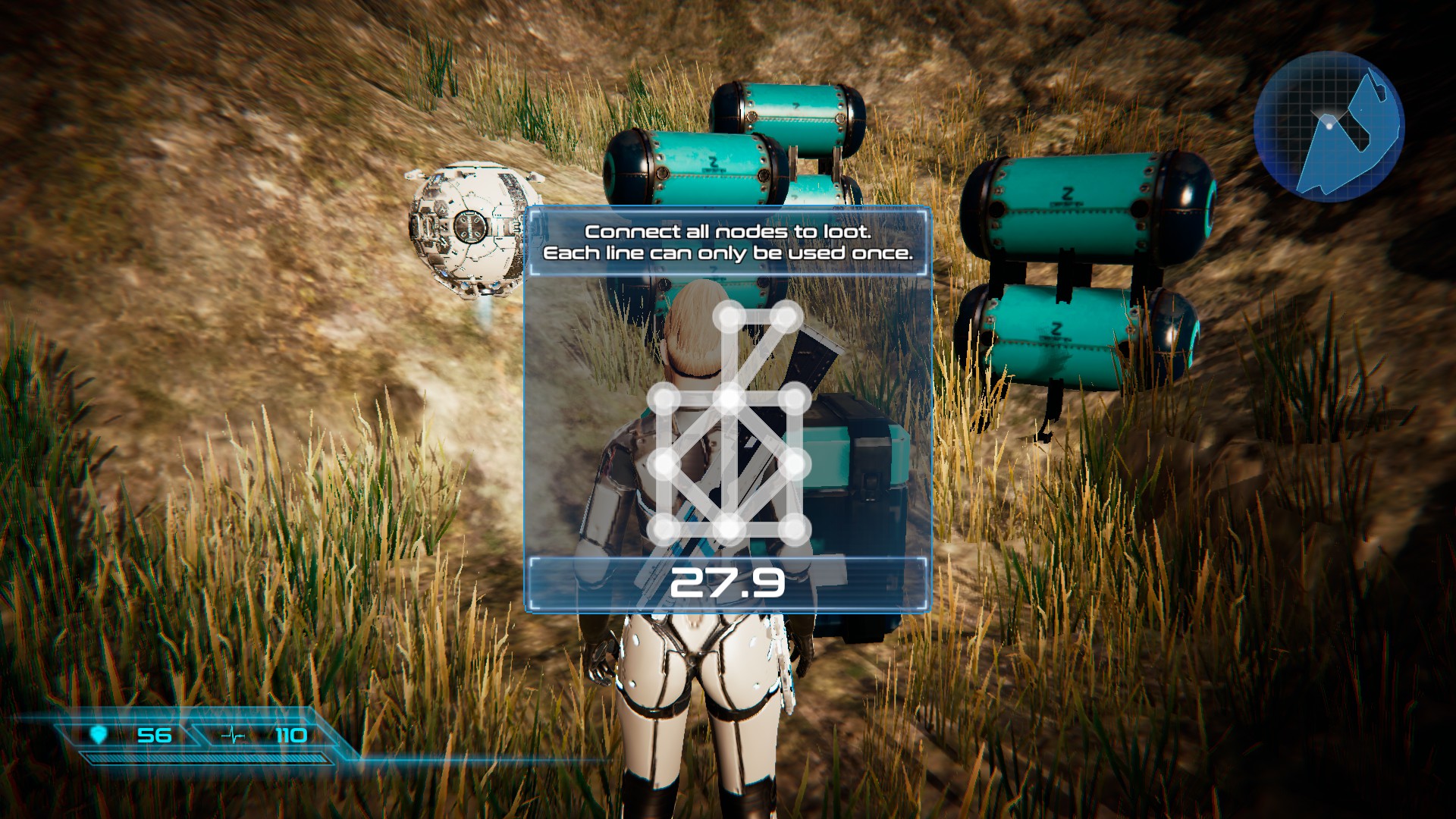 One of my biggest gripes with this game perhaps is the fact that there is no manual save. The progress is saved only via checkpoints, and some of the checkpoints can be quite far apart. I think for a game of this type, manual save is necessary, especially for players who have busy lives.

There are a few sidequests given throughout the game, as in most RPGs. Although the majority of the sidequests are simply just additional objectives to the main mission and rarely ever require us to visit entirely new locations. In that regard, the game is pretty linear and does not offer much in the way of exploration and managing of quests.

In general, the gameplay feels a bit like a mixed bag. It’s generally fun and fits with the game, but it certainly leaves room for improvement, and in some regards it can feel a bit unpolished and rough around the edges. I’ve not come across any game-breaking issues, but there is a number of small issues that could put some players off, like for example the fact there are no melee weapons in the game and so if you run out of ammo, you have no way of dealing with the enemies. That hadn’t happened to me, but a few players reported that in the game’s Steam forum. The developers, however, are clearly passionate about this project. They’ve been making frequent updates, as well as listening and responding to player feedback since the game’s release, so I am sure all those little annoyances and rough edges will be smoothed out in the near future.

The visuals have been pulled off rather beautifully. All the environments truly do give us a vibe of a futuristic Earth-like planet that’s in the process of colonization. Moreover, it’s not all metal and concrete as is often the case with futuristic settings. In fact, the majority of the locations are set in mountainous areas with a lot of nature and alien flora and fauna in our surroundings, and only occasional bases and outposts scattered about. There is a desert area in the game too. A lot of the areas in the game can give us the same sensation as how we felt when exploring new locations on new planets in Mass Effect 1. 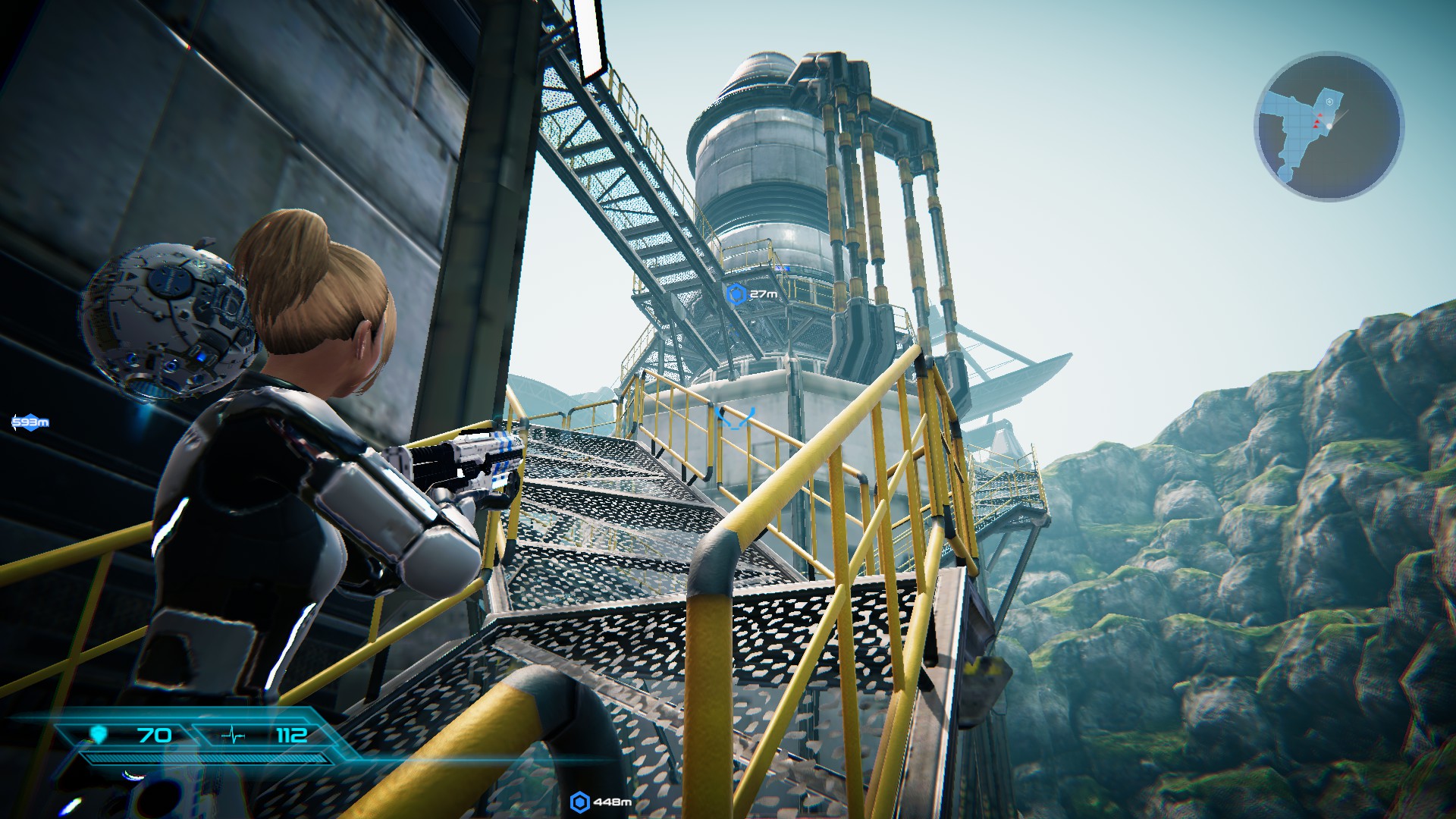 The character designs are also well done, especially the main character, who has a nice balance of being both cute and tough.

The music was superb in a lot of parts of the game and set the tension incredibly well. Many of the tracks reminded me of music from ‘Deus Ex: Human Revolution’ and ‘Tron: Legacy’ movie. I remember often noticing when a new track would kick in, telling us that things were about to get serious and that we better brace ourselves. It matched the action perfectly.

Great voice acting too, for every character. AAA standard as far as I noticed. 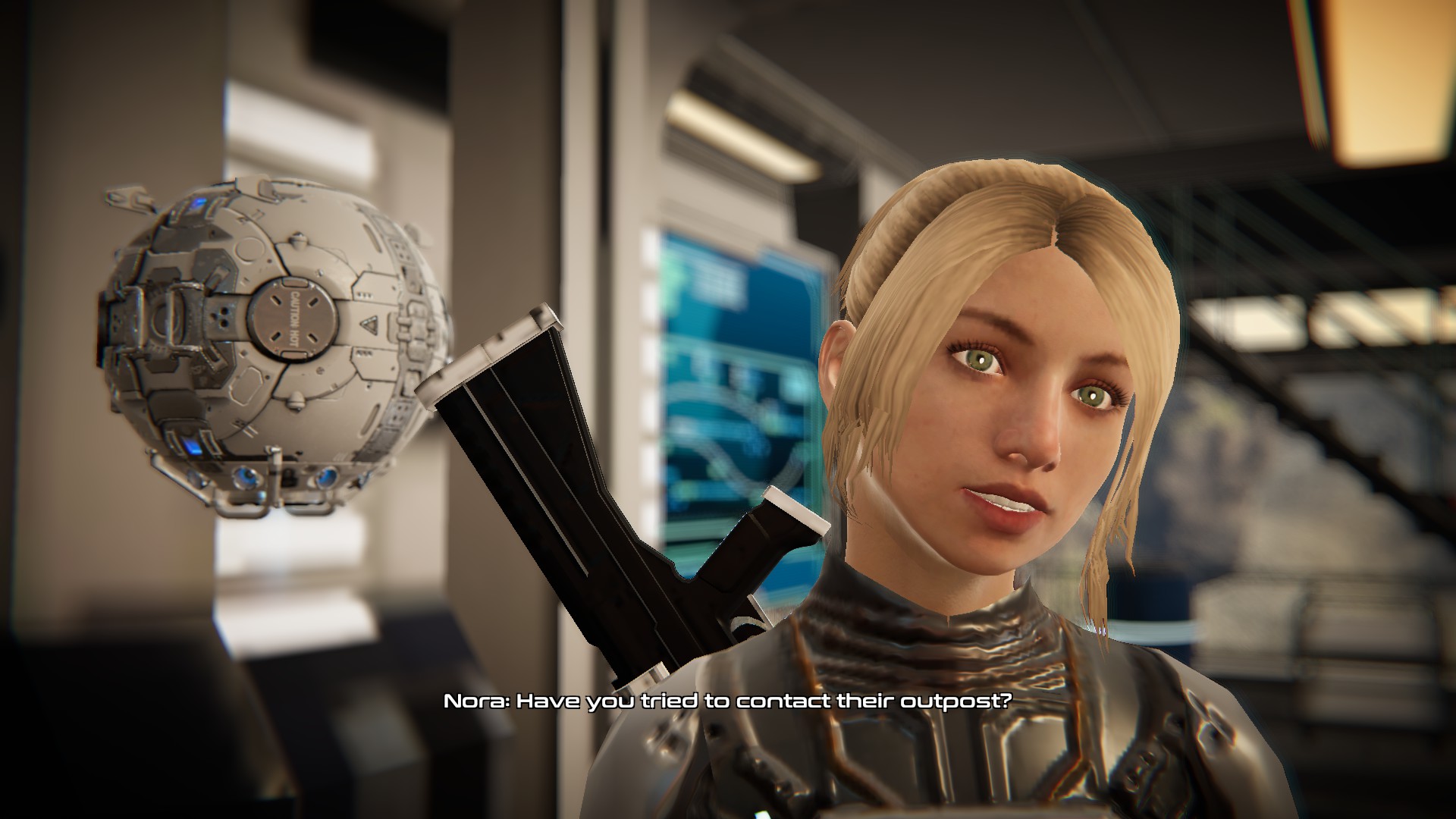 No doubt that Everreach: Project Eden was a rather ambitious title for an indie team, and it being rough around the edges shows for it. It’s significantly shorter than an average AAA RPG too, averaging at about 8 hours per entire story playthrough. However, despite being short and a bit rough, it’s great at the core and has had a lot of passion put into it, and to me personally, this is important. I would rather play a game that has a great core and rough edges than one which is greatly polished but has a dull concept or gameplay.

So, if you can look past the little issues the game currently has, you’ll find yourself enjoying this nice indie version of a Mass Effect. It has a soul and is being constantly updated and supported by the devs. Assuming that many of the current issues will be mitigated in the near future, I’ve decided to give this game a ‘Save’ rating as I’ve enjoyed it quite significantly overall.