The king is dead, the kingdom has fallen into disarray, and you’re the only one who has the influence and acumen to unite the council and restore the land to its former glory.

The king has been assassinated and there is no heir to the throne. The trusted council is all that remains to lead the kingdom in this most troubling of times. In Court of Ashes, you’ll be taking the reins of one of these influential and uniquely skilled individuals to combat the chaos that is plaguing the land and guide it toward better times.

I don’t tend to go out of my way to seek out visual novel games. Court of Ashes was a bit of a reach and out of the norm for me but my first glance at the game had me interested in its strategy elements as I do enjoy games that put you into a position of rulership with many choices to make. I’m happy that I did as I ended up absolutely loving the game and played through it twice in a row the first time that I sat down with it. I’ll be avoiding spoilers as the stories that unfold are the primary portion of the game and should be experienced firsthand by the player but I’ll also be highlighting some of the most impressive aspects all the same. 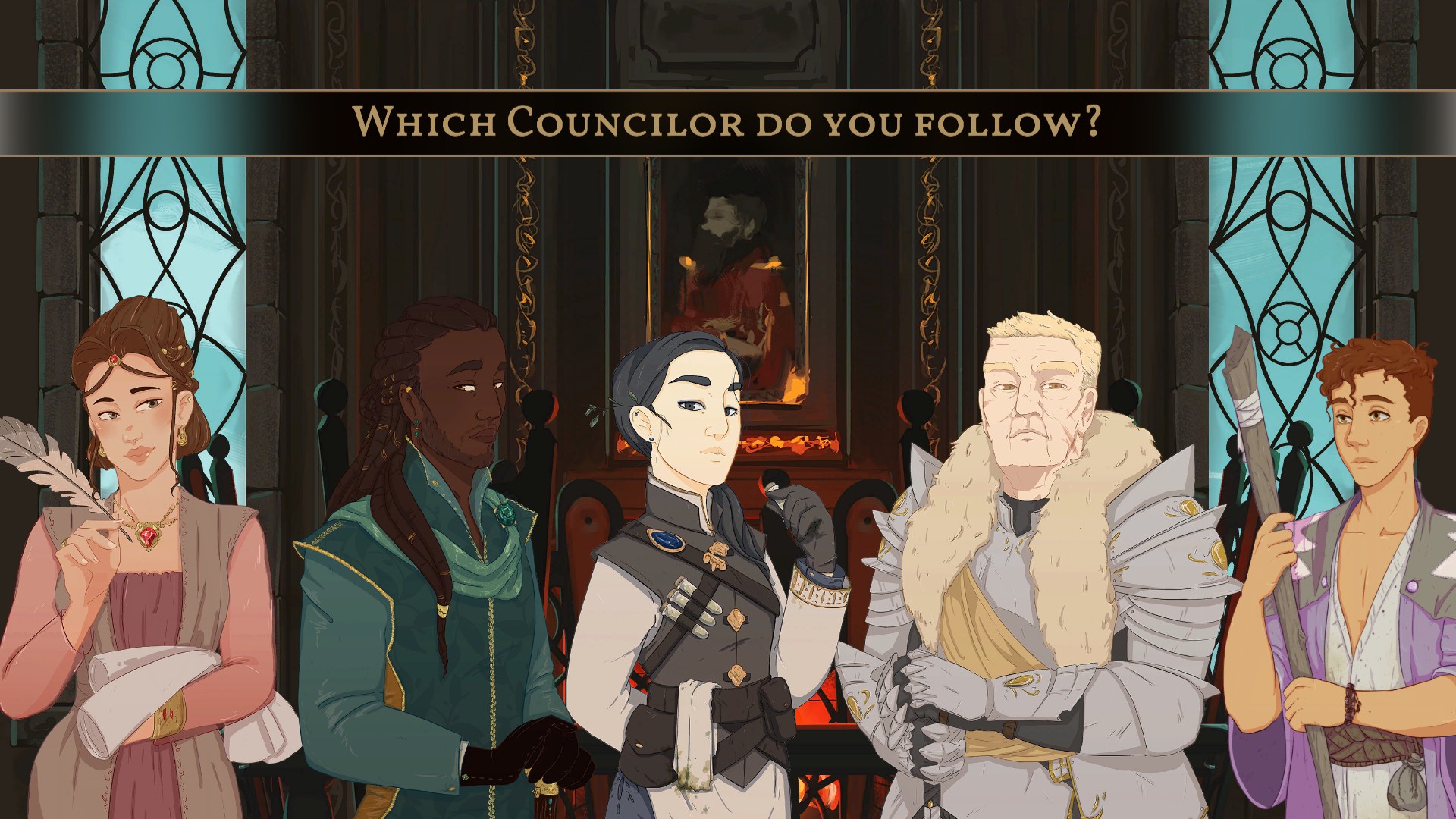 The first of many decisions that you make in Court of Ashes is which councilor that you’ll be assuming the role of. Each of these characters is unique and provides a different experience in addition to having unique dialogues and scenes with each of the other councilors. Your options include the General of the Armies, Bruno Martinelli, the Coinmaster, Armis Lieber, the Alchemist Royal, Bride Loclett, the Chief Minister, Regina Eller, and finally, the Rector to Her Holiness, Janpier Graye. Bruno was the councilor that I chose to play as in my first playthrough and he brings an impressive military resource production bonus to the table as well as military-related dialogue options. I followed him with Armis for my second playthrough, and he brings a different viewpoint of the events that are unfolding as well as a nice production bonus to goods. Both of these stories had a number of similar events but also had noticeable variations based upon the character’s focus and my own choices; I had as much fun on my second playthrough as I did on my first even if I was skipping through some of the dialogues that were shared. It should be noted that even this second playthrough didn’t weaken my interest in the game and that I’m looking forward to playing yet again with different councilors and alternative decisions. 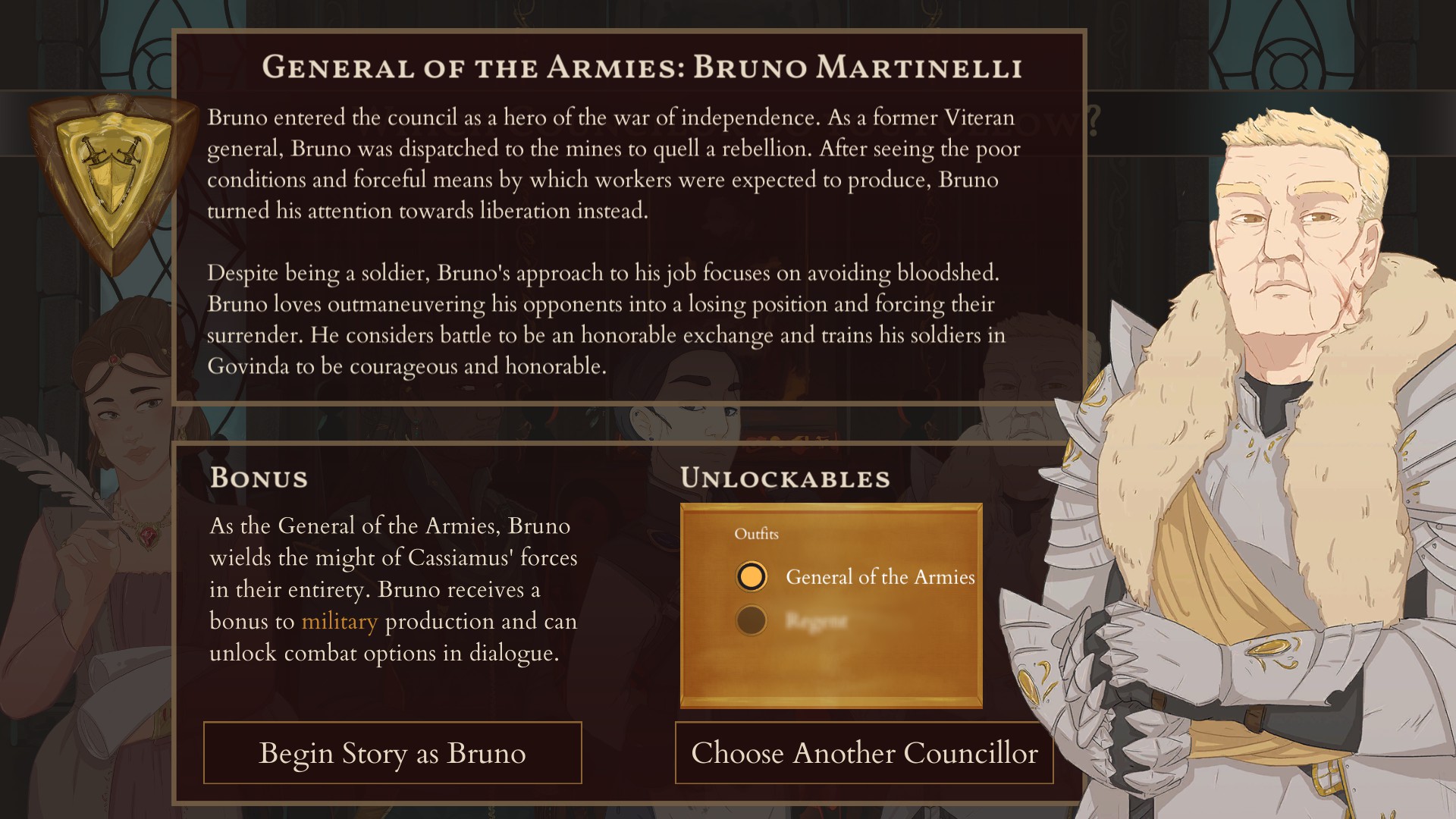 Kingdom Without A King

The varying council members and their dialogues are great but what really sold me on Court of Ashes was the kingdom management. Every single day requires you to manage your time efficiently; you must choose between building your relationships with the other councilors by visiting them on the City Map or making decisions on the issues that have presented to you in the War Room. You only have a limited number of actions per day and you must use them wisely. 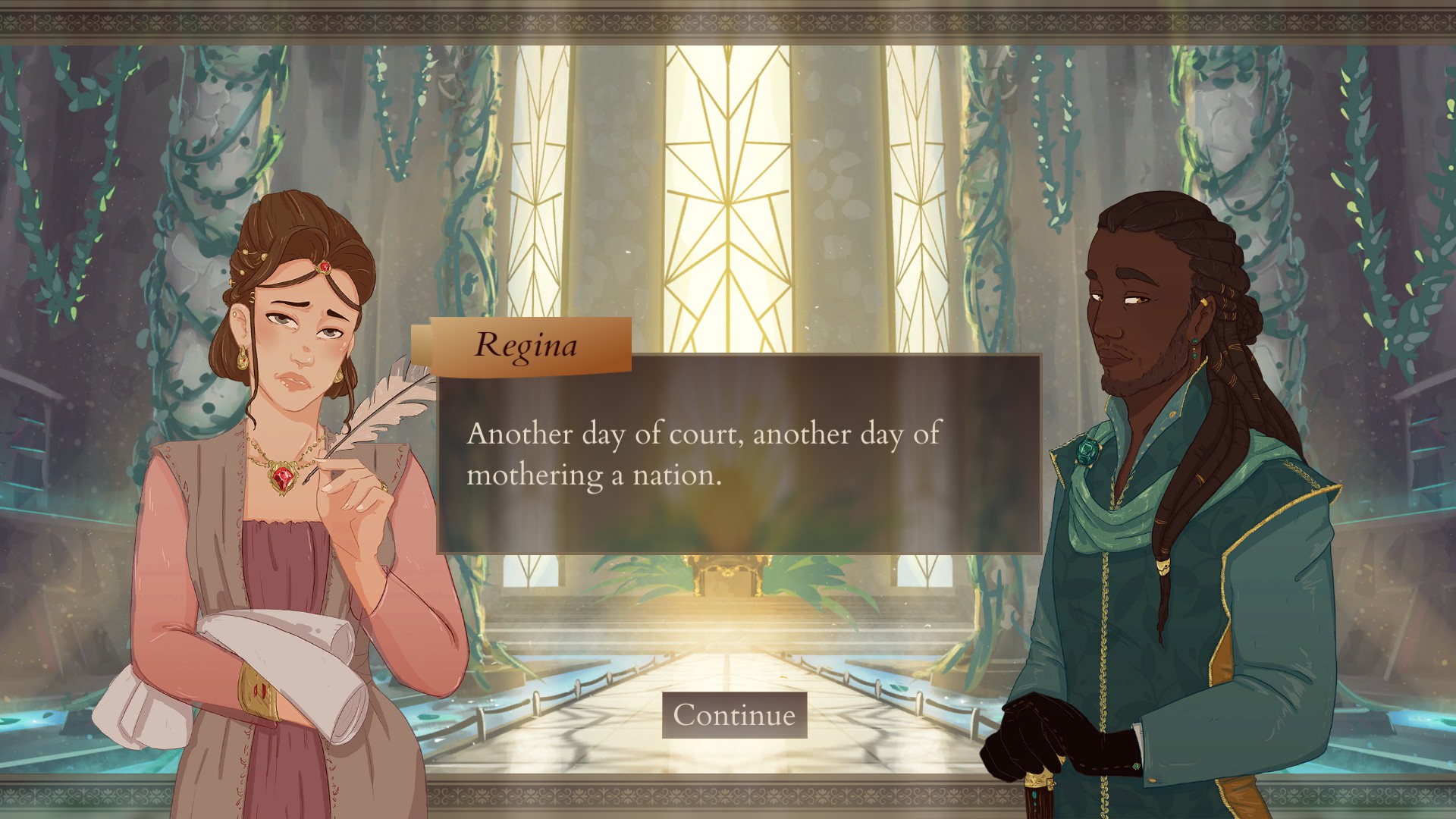 Cultivating relationships with the other councilors is important for two reasons. For one, upon becoming good friends with them you receive useful bonuses to the production of resources related to the dialogue and character development that happened along the way. A second, and perhaps even more important motivator depending on your goals, is that those who you have built strong relationships with will support you if you are planning to throw a bid in for the crown once everything is all said and done. 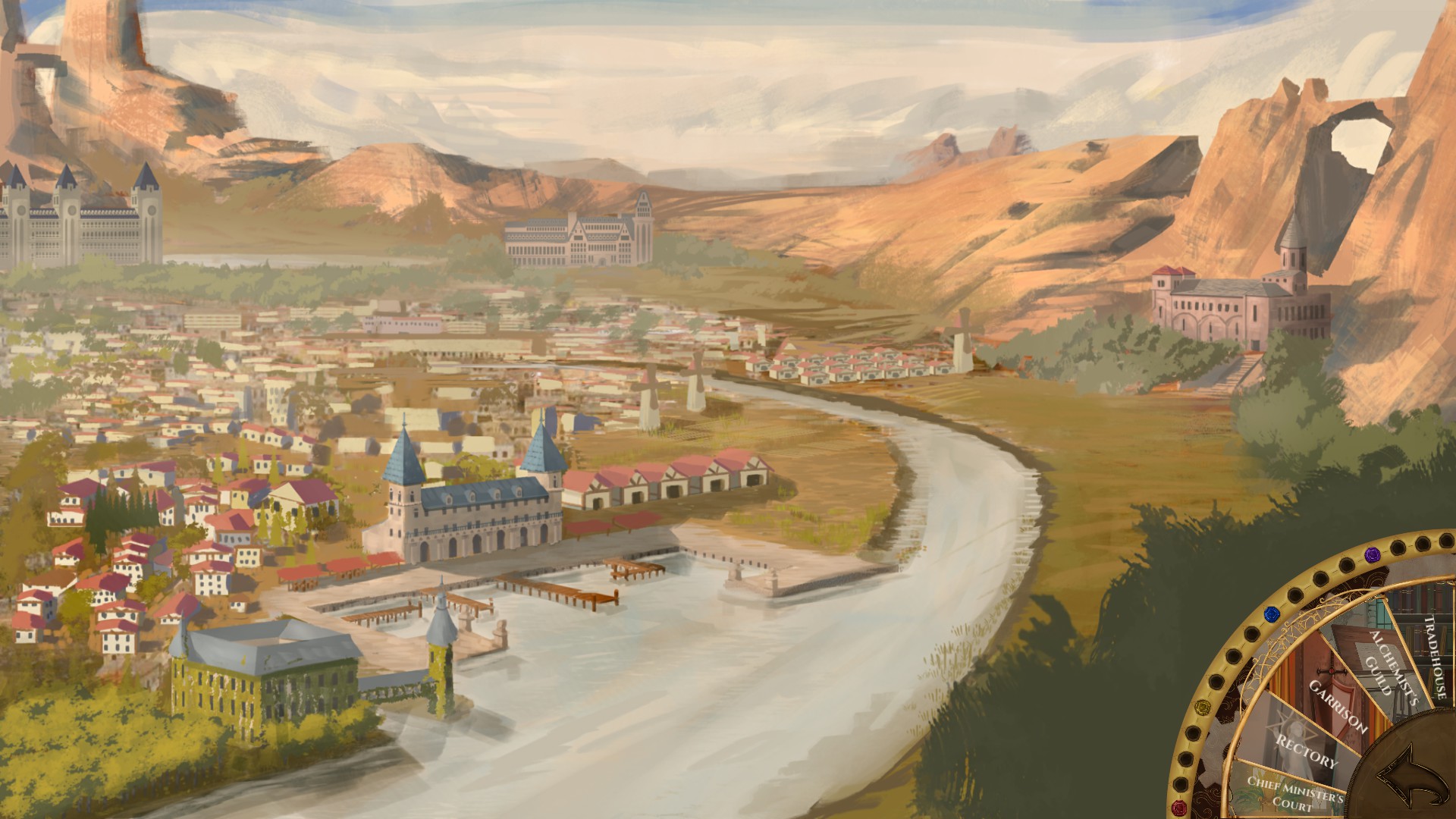 Alternatively, your decisions in the War Room will shape the kingdom itself as the story progresses. Part of the beauty of this game is that there are no right or wrong answers, you’ll have to determine what you think is best depending on the state of the kingdom, its resources (gold, goods, military, food, and influence), or maybe even just your personal preference. You may believe that offering a military escort to the high priestess is a solid option due to the boosted relationship that you’ll gain with the Church of Light, but if your military reserves are already running low you may want to forego it so that you have it in case of bandits harassing your farmers. These events come in a wide variety and many of them have story arc continuations of their own that kept me immersed from start to finish. 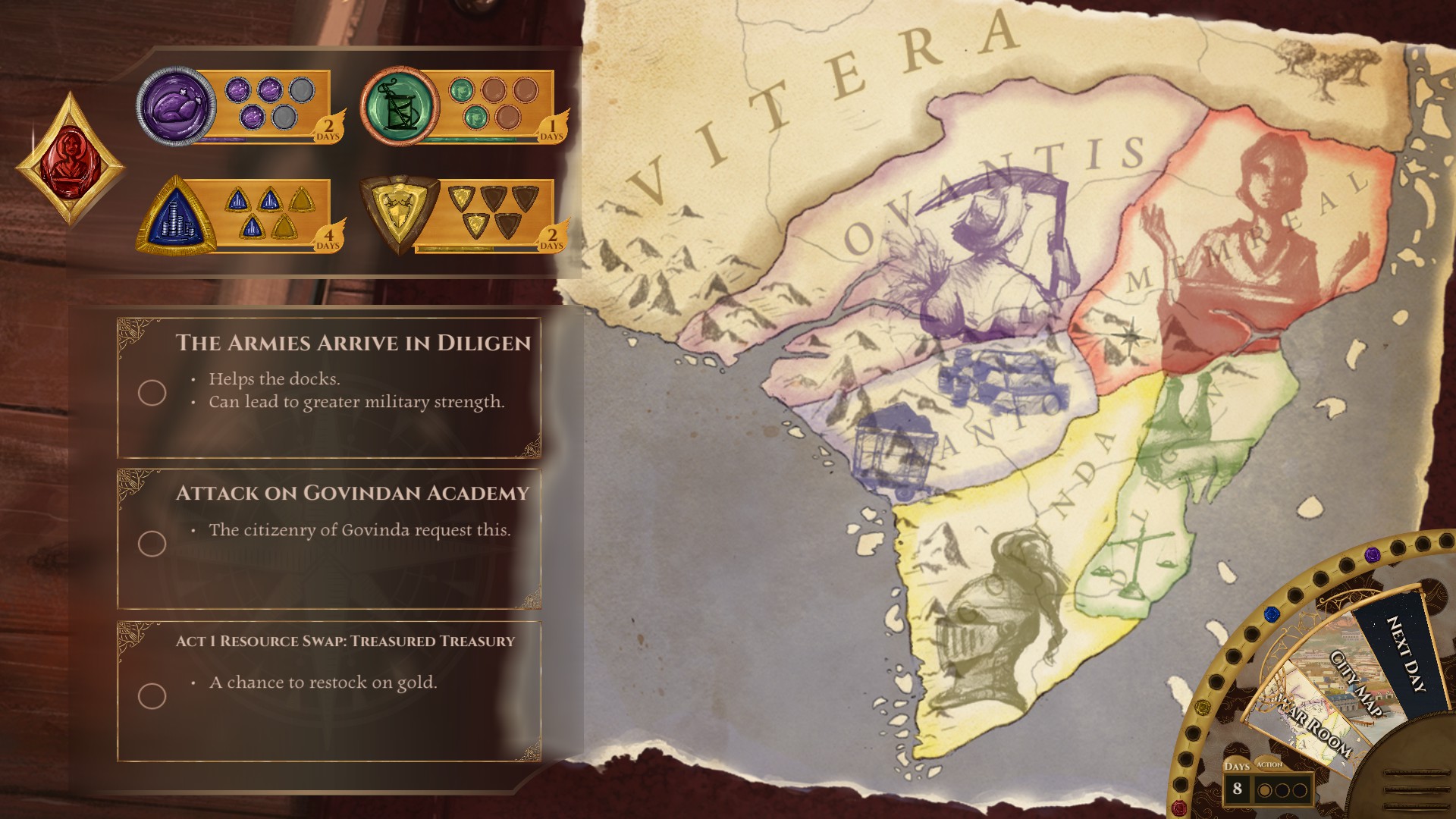 Although the mechanics of Court of Ashes are relatively simple and intuitive, it was the many choices, deep characters, and branching story that make it an excellent choice for your next game. I was kept entertained and immersed for two consecutive playthroughs and I’ve still got the itch to give it yet another go. If you enjoy making impactful choices that shift the narrative, particularly at the political level, you don’t want to miss out on Court of Ashes. If you’re not sure how you feel about the game but feel that there’s something that intrigues you enough that you’re on the fence, I would encourage you to pick it up. There’s a very good chance that you’ll find an experience that is easily worth the asking price and maybe even one that you’ll return to many times as I plan to. 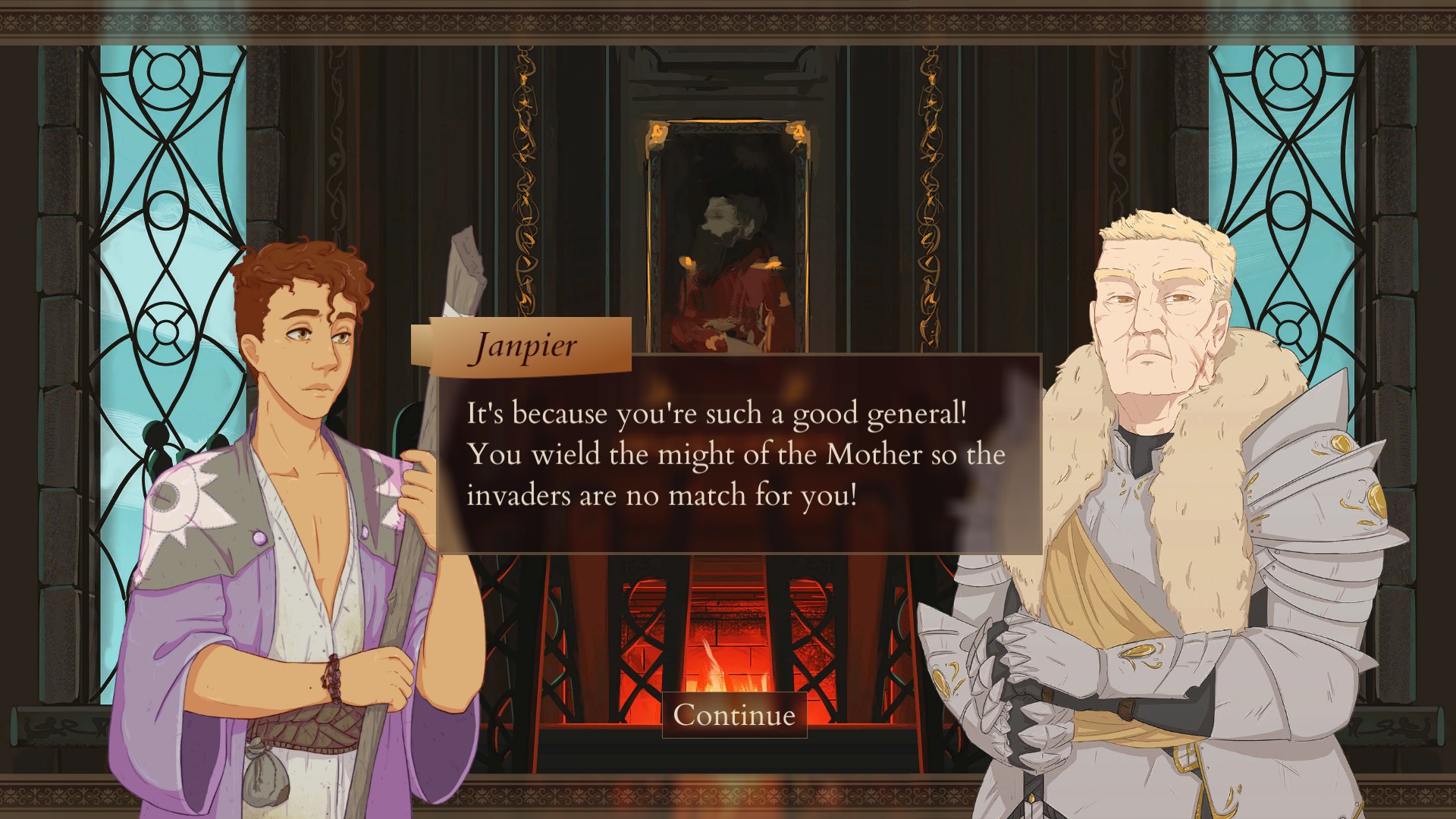