REVIEW: Angelo and Deemon – One Hell of a Quest
2 comments
Share:TwitterFacebookRedditPinterestWhatsAppEmail

REVIEW: Angelo and Deemon – One Hell of a Quest

A fun and light-hearted point and click adventure through hell by a blogger and his newly made demonic friend.

Angelo is a video blogger with almost a million subs, and his views are starting to diminish. He is scared this will cause him to have to find real work. In a meantime, Grim Reaper visits the world of the living to take away yet another unfortunate soul that is about to pass away, except by mistake he mixes up the flat numbers and arrives at Angelo’s place. Angelo agrees to travel to Hell in the hope to take pictures and videos for his blog.

This, in essence, is the main premise of the game. A little unusual, but at the same time fits with the light-hearted narrative of the game, where we are not playing as a hero who’s going to save the world, but rather a lazy blogger who’s trying to save himself.

So then, Angelo decides to have a vacation in Hell in order to save his blogging channel. For the whole game he is like an ordinary nerdy guy. He’s not a cliché hero nor a wise detective.

The other prominent character is Deemon – yes, spelled with two ‘e’s and the emphasis is on ‘o’. We meet Deemon early on in the journey and he joins Angelo on a trip to Hell for his own ends. Deemon looks like a small, flying demon, but he claims he used to be a human rapper back when he was still alive. Deemon is a funny character and adds a lot of spicy and humorous comments in each scene or when interacting with various objects in the environment. Whereas Angelo is a nerdy idealist, Deemon is street smart and sarcastic. 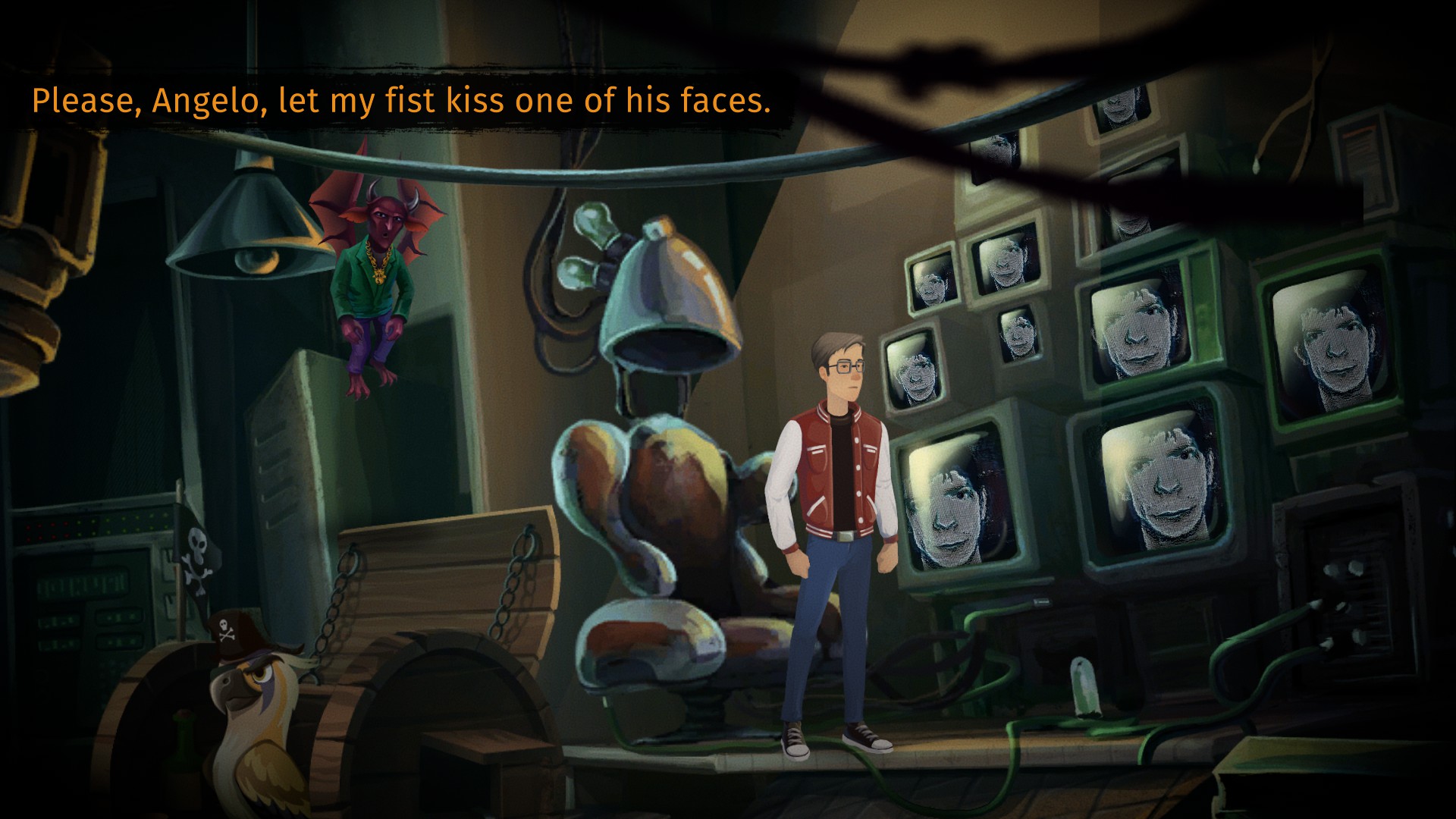 During the game, we meet plenty of other NPCs, and each one has problems of their own. Usually, we are required to do something for them in order for them to help us in some way and allow us to proceed further, just like we’ve seen happen in many games of the point-and-click genre. In this case, the problems NPCs have are to do with their own annoyances related to the afterlife. Even Grim Reaper himself seems to be fed up and hates his job. The only thing he appears to be excited about is to get drunk and sing songs.

So, the characters are generally fun and well-developed, and all have something unique about them. The story though doesn’t seem to be having much of a direction. Angelo’s motivations at the start are clear, but after that, what motivates him becomes fuzzy and hard to understand. I am not quite sure at which point of the story he decided he’s had enough of the trip in Hell and it’s time to return home. So, in that sense, I think the game has some room for improvement. It’s still a fun journey and setting, and many of the NPCs have their own side stories that we participate in, but I think what motivated Angelo could’ve been done in a more believable manner.

This is not exactly a story about epic or deeply emotional moments. It’s a light-hearted vacation through Hell, and the game makes that clear from the outset. 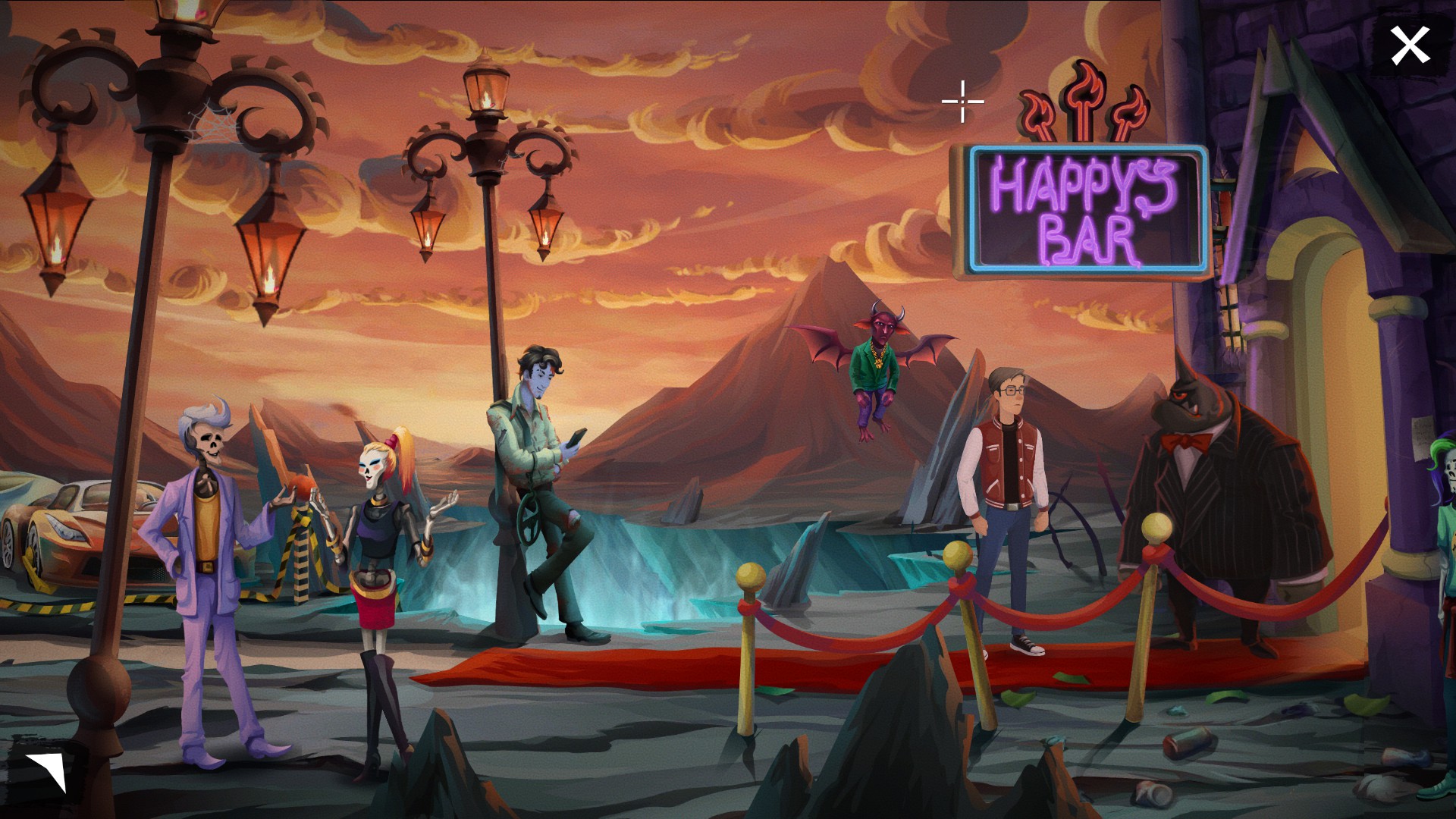 As mentioned previously, the game involves very standard point-and-click style gameplay. We can interact with the environment and the NPCs, solve puzzles and satisfy the NPC requests in order to move forward through the plot. As with most point-and-click games, we have our own inventory of items we find too, and we can combine some of them too.

Most of the puzzles are pulled off quite well. Some will get you thinking for a bit and doing some trial and error, but in general, none of them are impossible. Whenever we do get stuck, we can click on a microphone icon in the inventory to access the A.I on the phone (sort of similar to Siri) who gives us hints on what to do next. That’s a useful way of helping players get out of a standstill when they’re stuck.

If you enjoy traditional point-and-click gameplay, then this game should hit the spot and will be right at home with you. 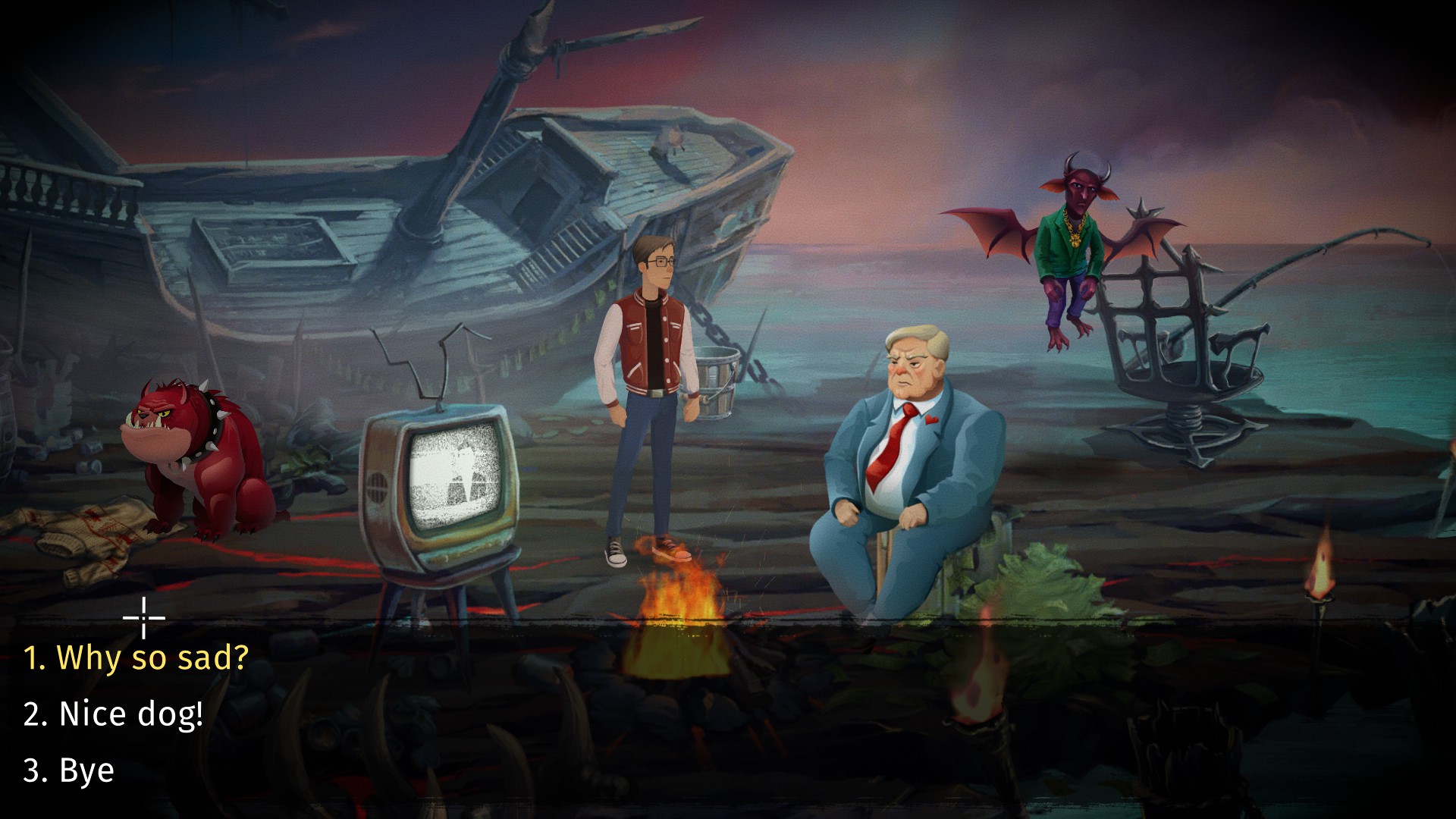 We can also use our phone to take pictures of NPCs and interactable parts of the environment, but aside from one Steam achievement, there doesn’t seem to be any other purpose to doing this. I was kind of hoping this would impact an ending or maybe to see the photos we’ve taken at the end – like perhaps to see Angelo upload his blog with all the photos onto the internet. There is, however, a secret non-canon ending in the game that’s easy to miss. When I first got it, it took me by surprise and was certainly an interesting touch.

The game has a really nice-looking visual style. The environments and characters look like they’ve been very carefully painted by hand, and everything is colorful and pleasing to the eyes. Most of the locations in Hell do not look like how you’d expect typical hell to look like, but that’s the idea the game is going for. It made Hell look a lot less unpleasant, and rather closer to the modern-day world with some supernatural elements. 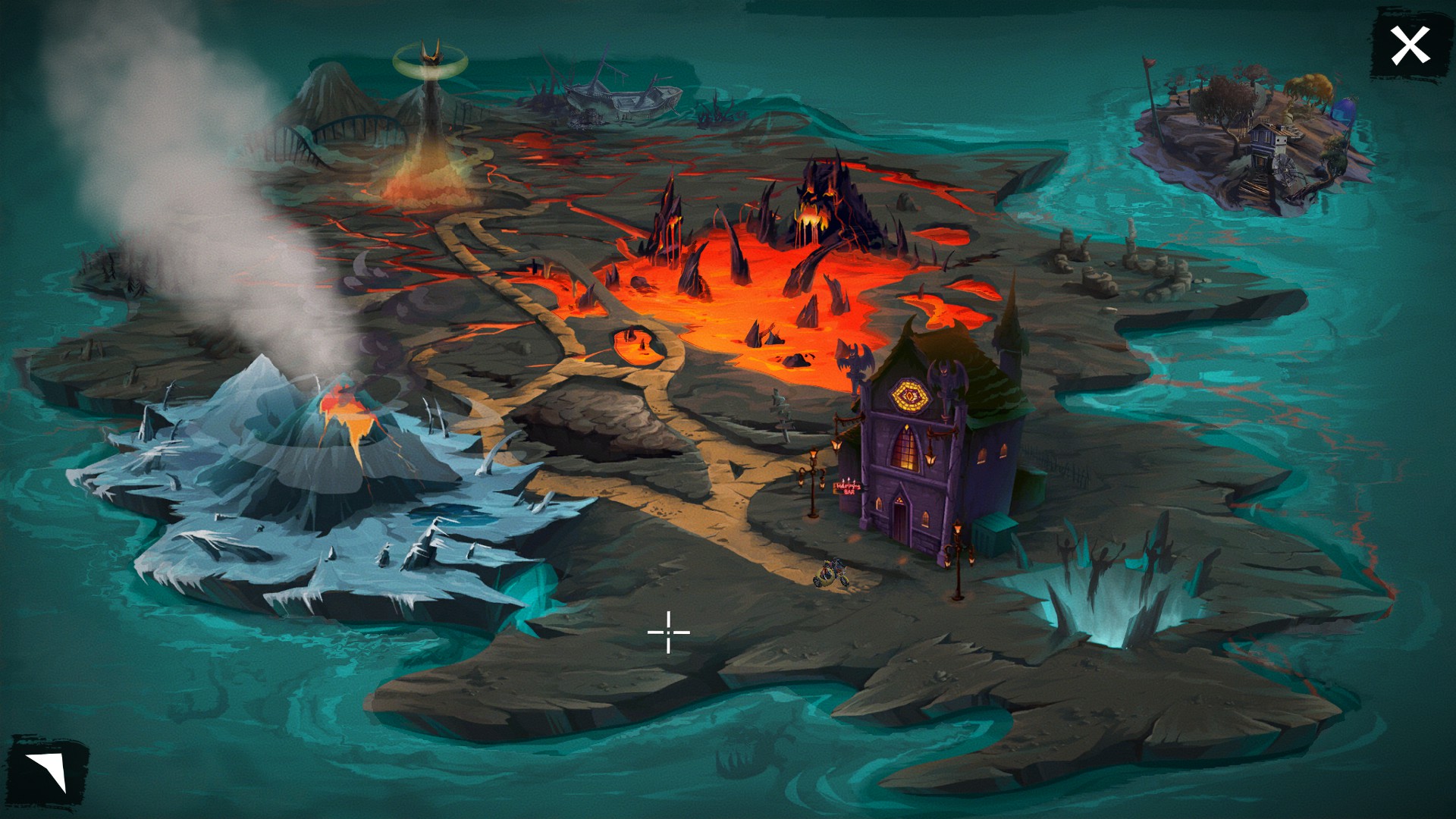 Music is fairly nice and most times is quite low key and in the background. It doesn’t particularly stand out, but it does its job sufficiently well in each scene. There were a few very nice tracks though, such as the one playing in the credits.

The voice acting is great, and each character’s lines are delivered really well. The way dialogue lines are delivered helps us to get a feel of the characters and their personalities and motivations, whether it’s Angelo’s nerdy tone, Deemon’s witty one-liners, Grim Reaper’s exhausted voice, or weird characters such as the pirate bird and its exclamations.

The interface is very easy to use and everything is presented in a crisp manner that aids in the enjoyment of the game. 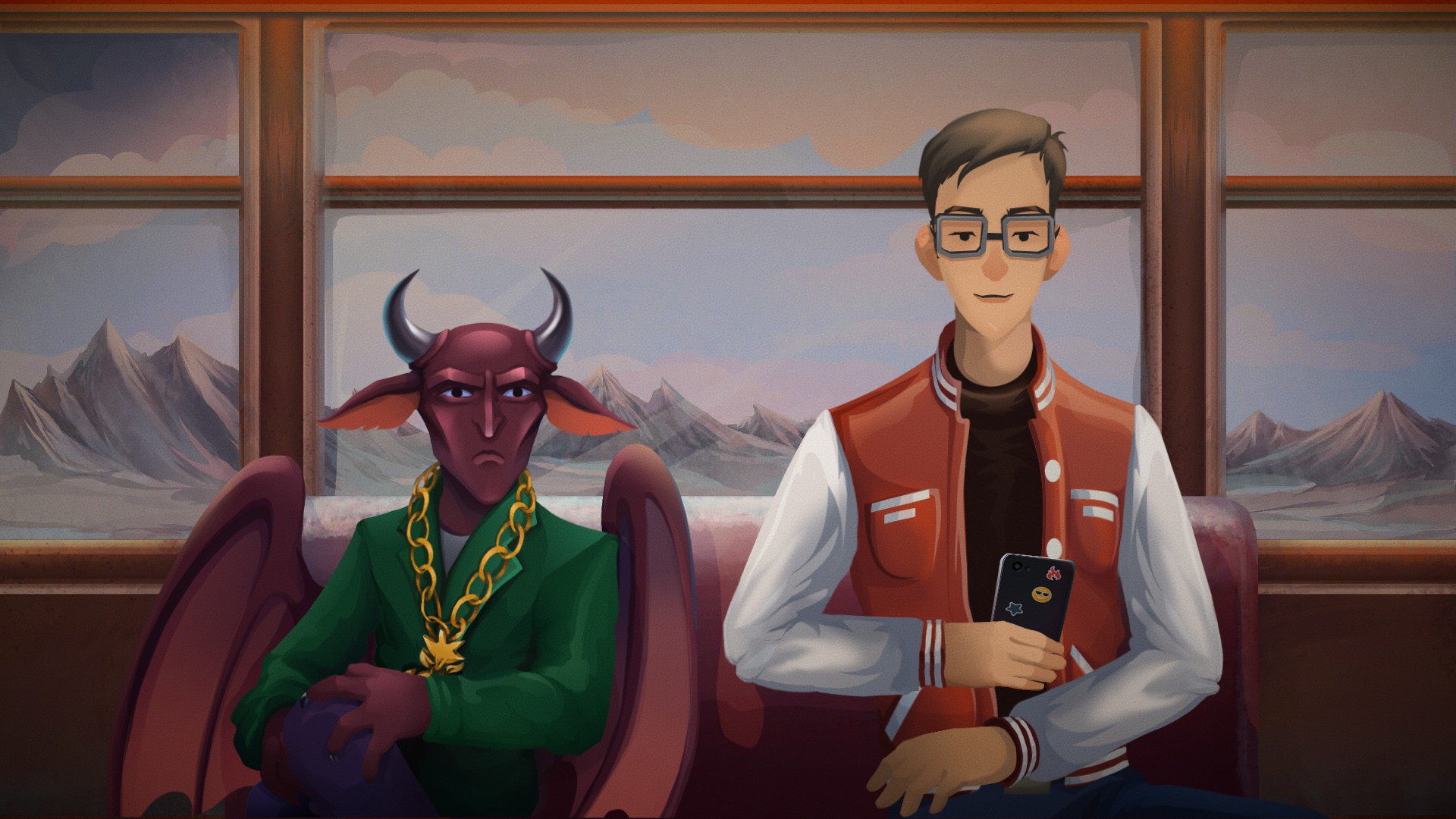 ‘Angelo and Deemon: One Hell of a Quest’ is a fun little journey through the underworld. It doesn’t break new ground or do anything extraordinary anywhere, but likewise, it has no big flaws either and accomplishes what it sets out to do. It’s a light-hearted adventure with a very traditional feel of point-and-click genre that should keep you glued for about 5 hours or so.

At the moment, I think its price is a little high for the amount of content it offers, so, if you’re someone who prefers to have more bang for your buck, you might want to wait for a sale price. But rest assured, it does provide a sufficient amount of entertainment and is worth checking out. For these reasons, I give it a solid ‘Save for Later’ rating.

Judging from how the game ends, there could be a sequel in the making at some point in the future, so let’s hope we’ll see more of Angelo and Deemon on another crazy adventure.