REVIEW: Tales of the Neon Sea

If you want to be on the force, you have to go through this puzzle obstacle course.

In Tales of the Neon Sea, you jump into the shoes of Rex. At this point of time, his days of being a cyborg police detective is behind him. Nowadays, Rex stays at home dealing with hangovers, making sure his most needed appliances are working, and taking up jobs as a private detective to keep up with repairs and bills. Unbeknownst to Rex, he’s about to encounter a mysterious masked person that wants him dead.

But that isn’t going to happen yet. Still needing to know what brought Rex to face this mysterious person, we go back to the beginning. After a night of drinking, Rex is woken up by his personal robot, BB-X. After getting a quick check-up on Rex’s cyborg half, BB-X manages to receive their own check-up. Well, today isn’t Rex’s day. BB-X, being an old model, suddenly short circuited and needs to be fixed up to work again. The problem is that the needed parts are hard to come by and expensive nowadays. BB-X will just have to wait till Rex has enough money or somehow comes across a part that is compatible. 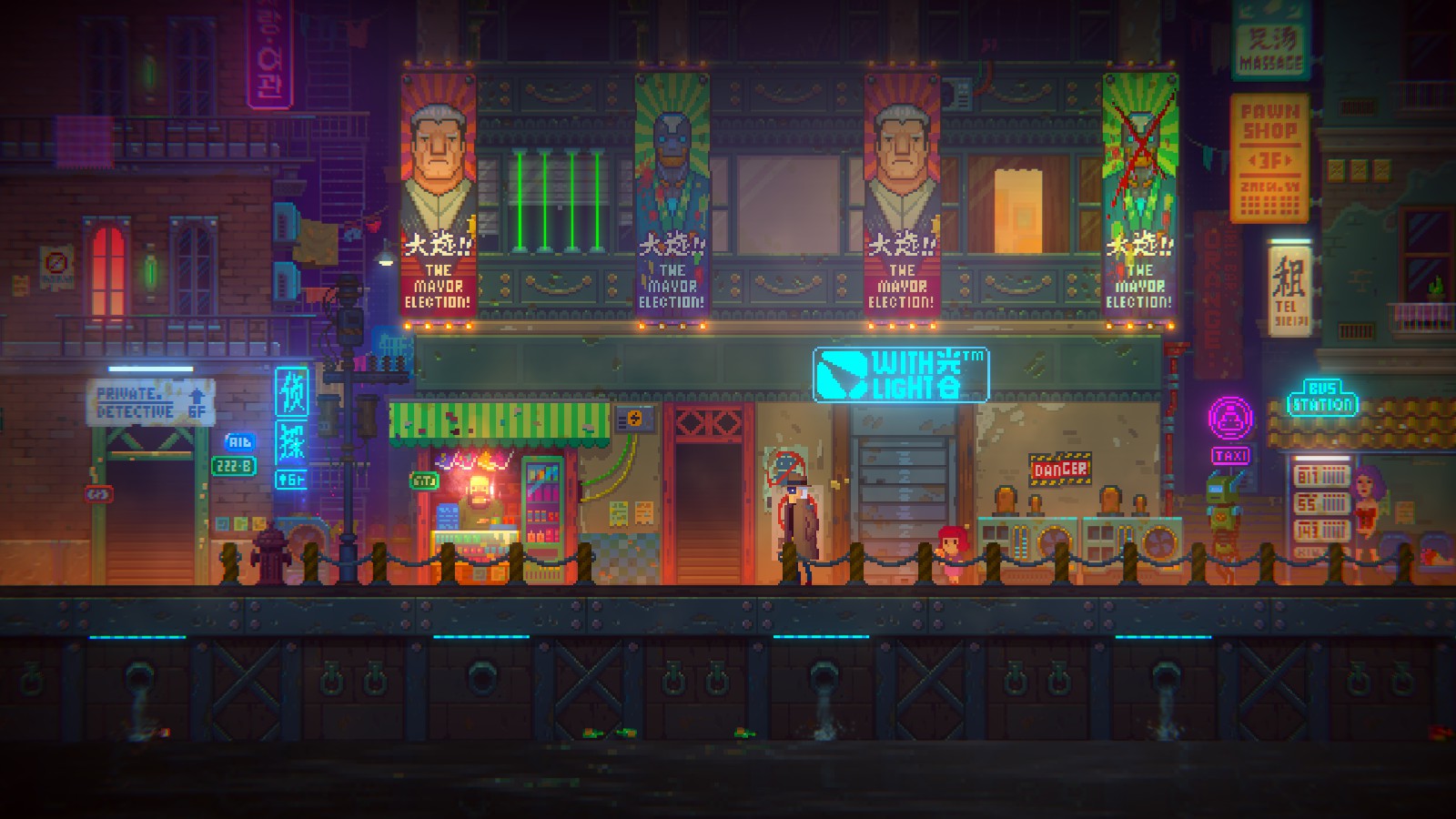 Rex kind of has a loyal partner in the form of his cat named William. After we find out that Rex can’t pay for BB-X’s new part, William is right outside ready to lead Rex to an alley. All seems normal, heck William also found himself a cat friend, until Rex spies some blood on the new cat. However, the new cat has no wounds and leads him to body buried under a pile of garbage bags. 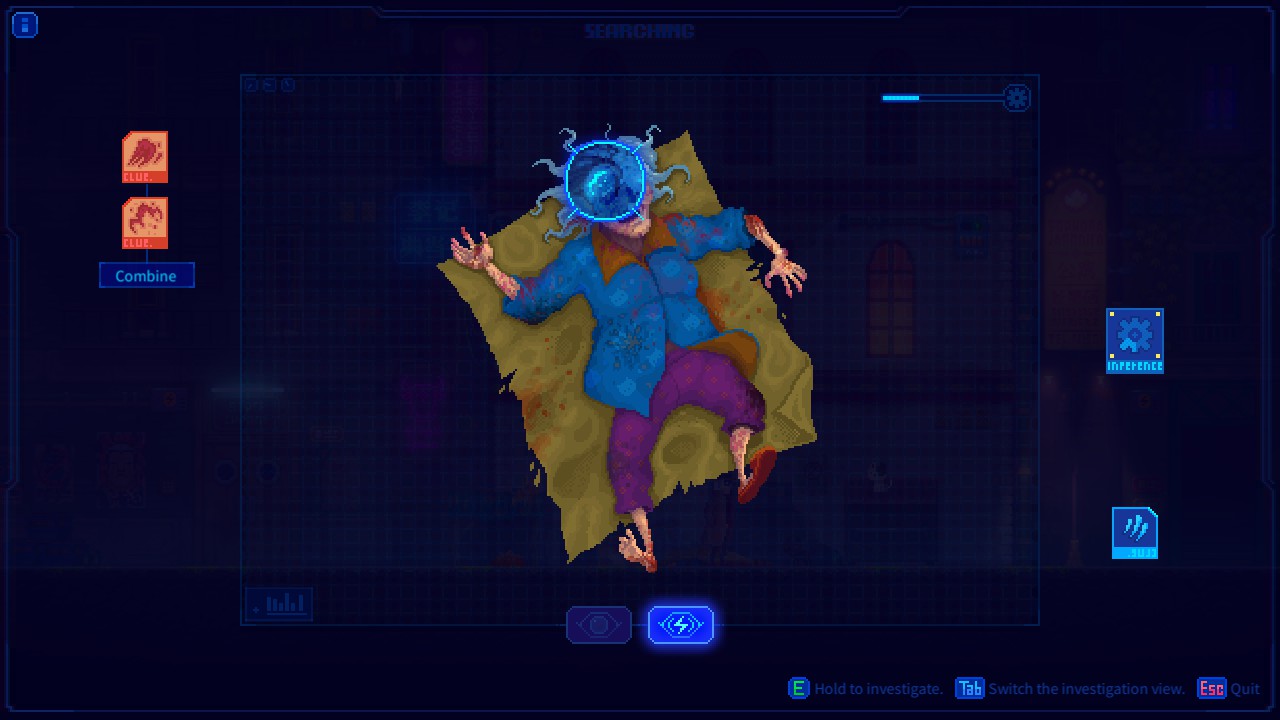 This brings us to how you investigate crime scenes. In addition to walking through each area for prompts, you’ll be able to examine the victim or a key area with two different settings. The first is just finding wounds or anomalies on the surface and the second uses his cyborg features to look into the smaller details like what was caused after death or fingerprints. As you collect corresponding traces you can combine them into clues for a more comprehensive report on what happened. Once you require all the clues from the scene, Rex sees it as a gear fit for a stopwatch. This happens with every clue you gather and Rex uses this to visualize what happened. Of course, you have to find a fit for each gear and once you do, the scene will play out right in front of you. 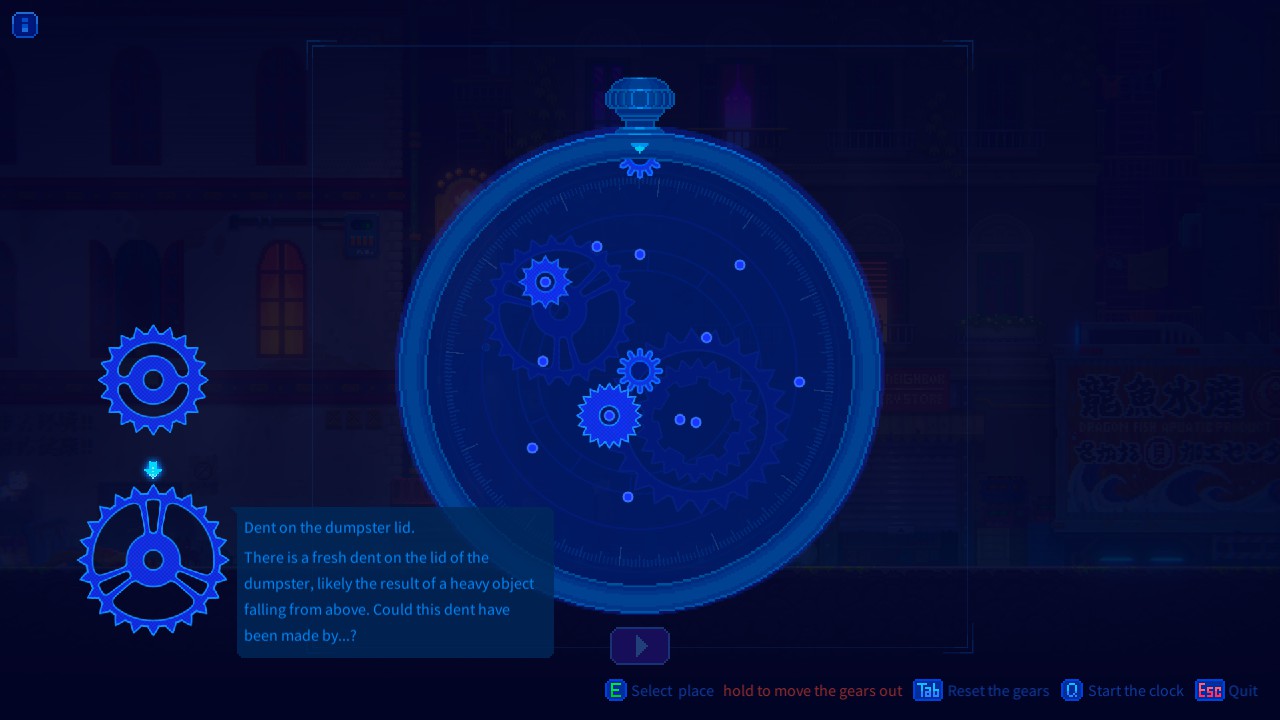 This murder is just the beginning. The victim is Mrs. Perry, an old lady who takes care of the local street cats and the suspect is her robot butler. The thing is, her robot butler has a strange device implanted in him. This all couldn’t just be to murder an old lady right? The upcoming election between a human and a robot must have brought this on. After all, if you don’t want a robot to ever be in charge, what’s a better way than to instill fear. Nonetheless, Rex isn’t having any of this and is determined to figure out the mastermind behind the devices as it leads him outside of his little town. While taking control of William to learn about cat family turf wars along the way. 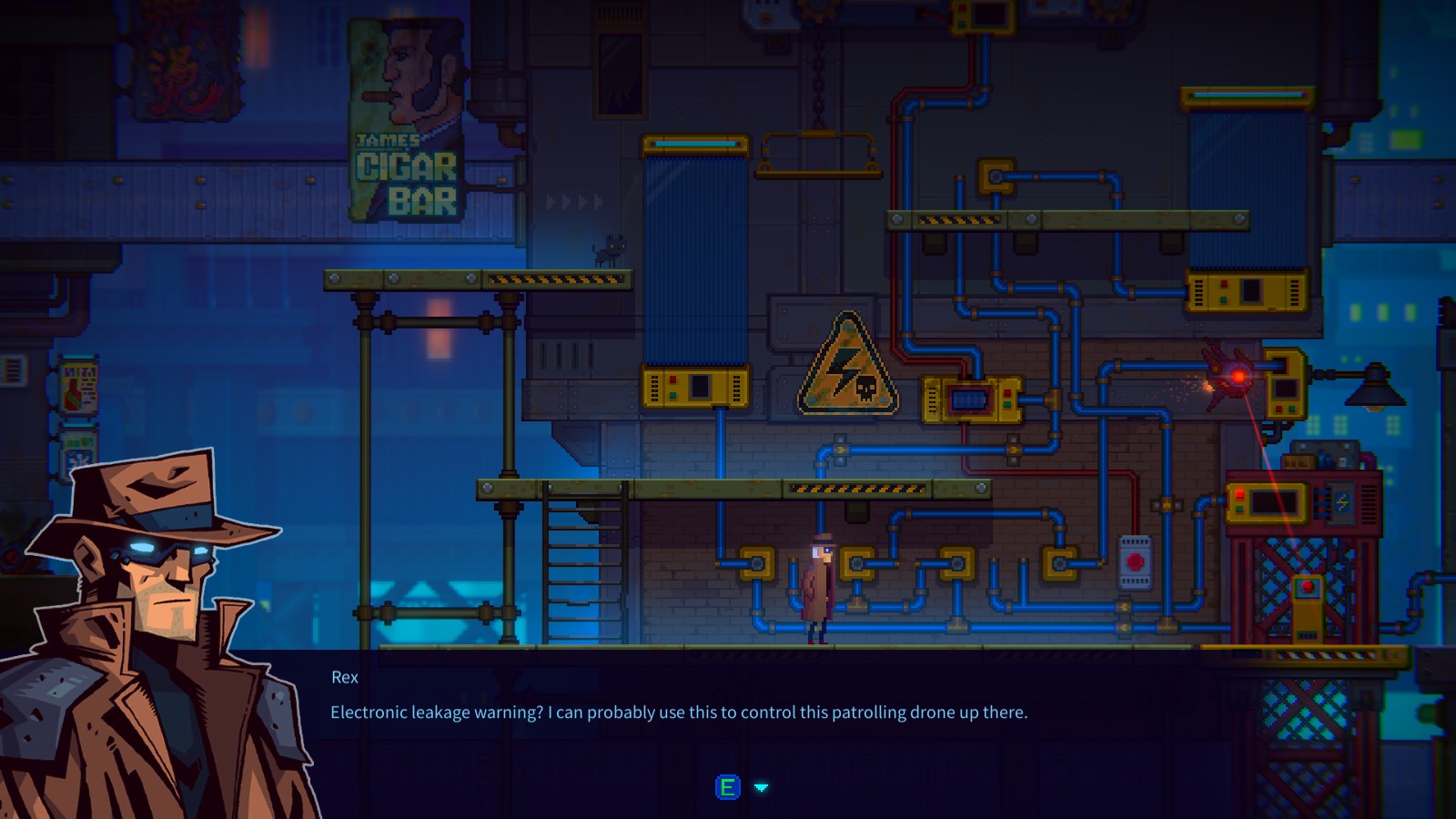 As you’re going through the world of Tales of the Neon Sea, you’ll come across various puzzles that need to be solved before you continue. The scope of these puzzles vary between each one. It can be just one screen where you have to try and unlock a door, require you to look around for needed parts (possibly solving something else in the meantime), or something that takes up the whole area. I would say that puzzles vary in difficulty that depends on, well, how big the puzzle area is. Each one is somewhat easy to figure out, apart from one that’s not required anymore, it’s just trying to execute it. 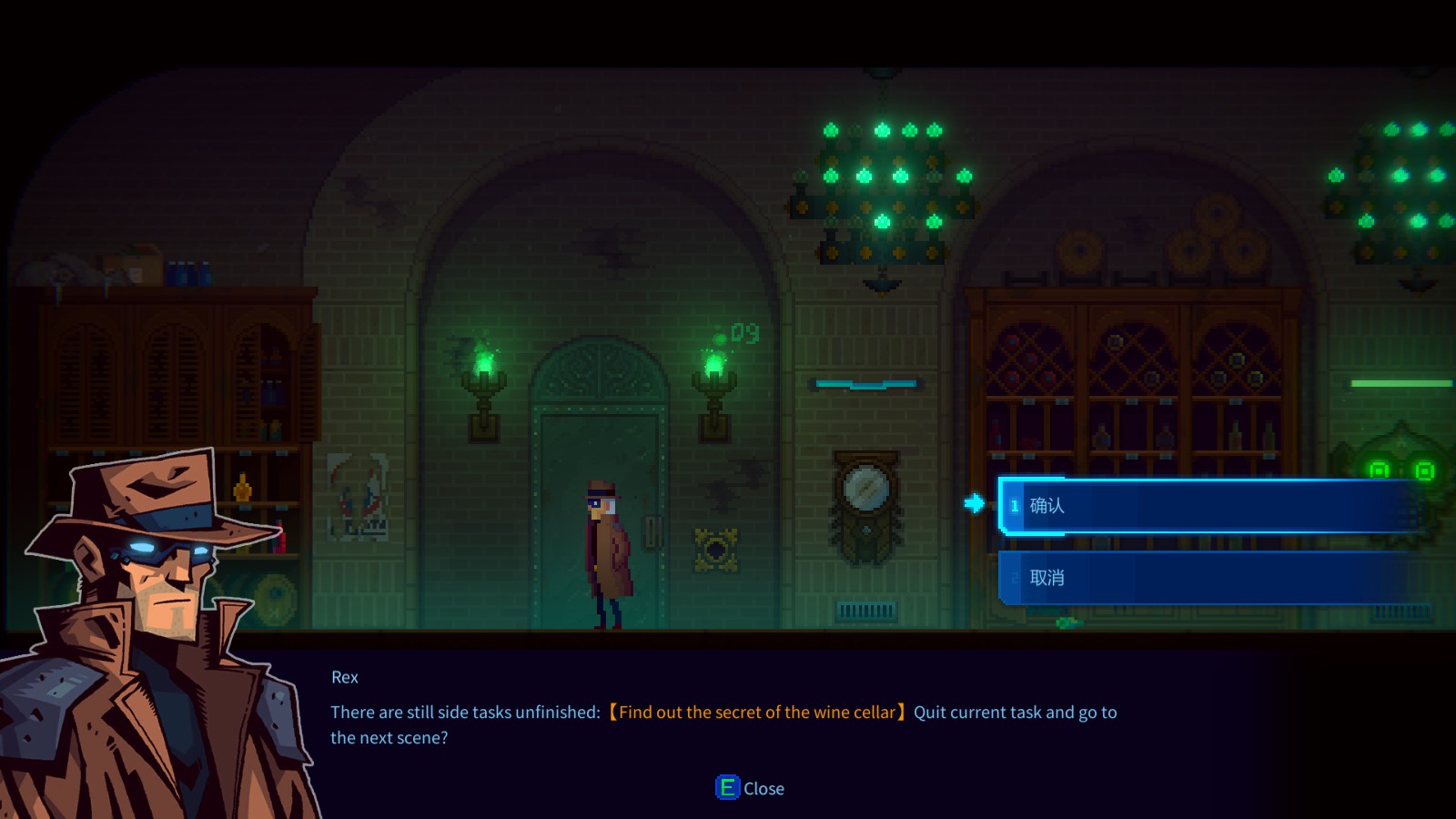 For anyone that’s been coming across Tales of the Neon Sea, it’s not hard to determine that its puzzles were the main complaint towards the game. This was mainly aimed towards puzzles that repeated and how some areas had too many that bogged down the story. Well, the developers have taken this feedback and adjusted the puzzles so it would be a bit better. Going by patch notes and quickly skimming through a gameplay video, some puzzles were put as an optional side-quest that you can skip, some small ones that were repeats were replaced with different ones, and some were taken out. The ones that were taken out seemed to be repeats and were in front of a puzzle that was long itself. Some of the longer puzzles were also adjusted so some items aren’t required anymore to continue.

You’ll also have many files available for you to read from if you choose, from character files to documents that you can pick up. Files are unlocked when you find a document in the world, get information by listening to conversations, or examining something in the world. 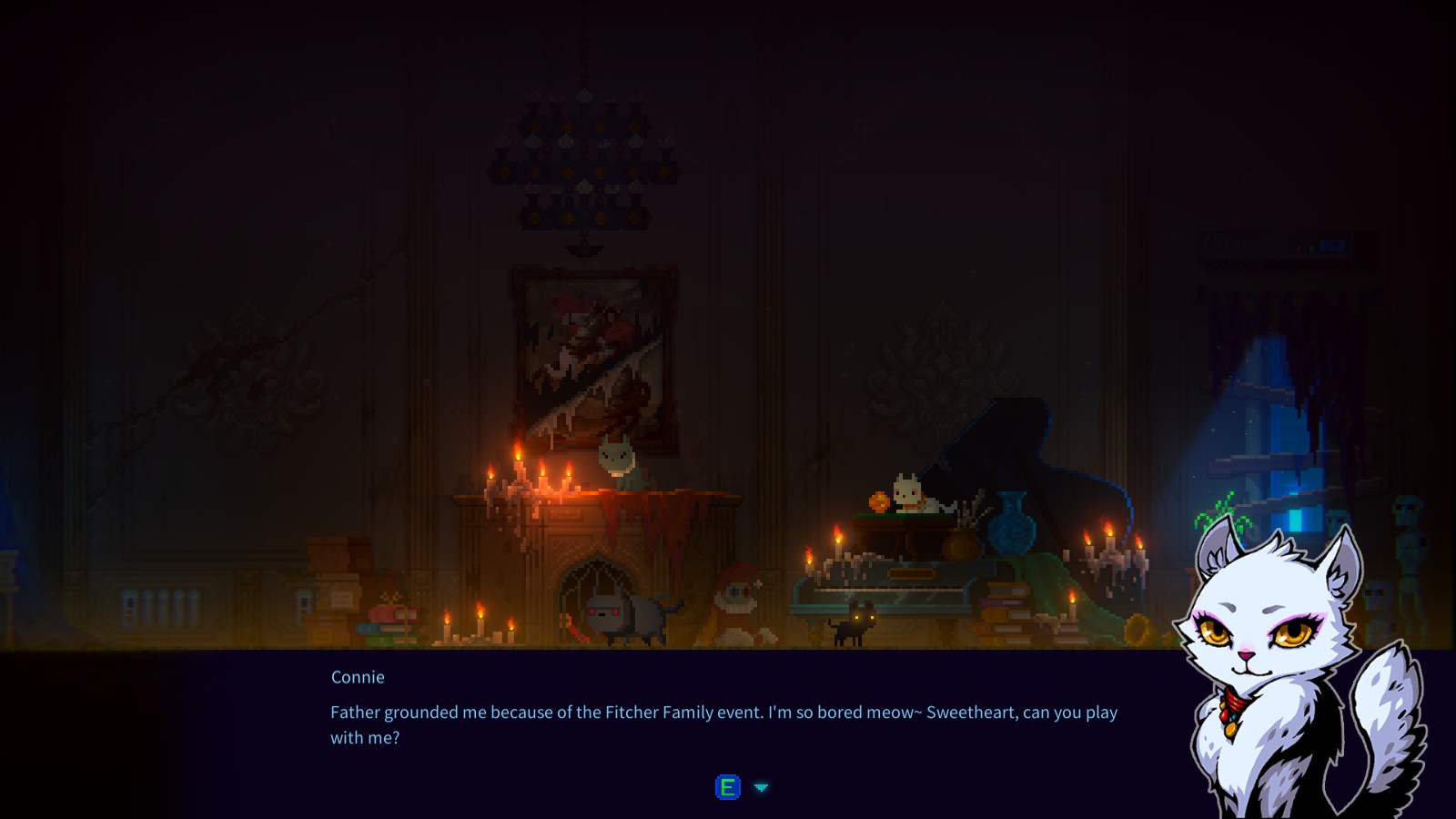 Tales of the Neon Sea is a decent cyberpunk game so far. Bringing in beautiful pixel art to showcase the neon filled world, nice art for character portraits, a variety of puzzles, and a story that keeps you interested. However, the puzzles do take time away from the story presented in this first half and while I did like playing as a cat, the mini-storyline in his main section only serves to lighten up the mood (well, unless the cat families play a part in the other chapters). There are also some prompts that are weirdly not translated like when leaving before completing side-quests or an error prompt (I assume) for a blocked platform. I would recommend Tales of the Neon Sea to people who enjoy puzzles and wouldn’t mind the story not being the main focus. As well as those who are fine with leaving off a cliffhanger as only half the story is available right now (otherwise wait till the free update that’s hopefully coming before the end of this year).