If he sees underwear, humanity will be destroyed!

Punch Line is a brand new PC port of a three-year-old game for the PlayStation 4 and Vita. Developed by MAGES and published by PQube, the Steam release had been on my wishlist for quite some time!

Before playing the game I knew very little about it, but that one line on the store page — “If he sees underwear, humanity will be destroyed!” — made me laugh with delight. I knew I had to have it. Punch Line the game is based on an anime of the same name, which was first released a year before the original PlayStation games. I haven’t seen that, either, so I’ll be restricting my comments in this review to the game itself.

Anyway, in the game you play the role of Yuta Iridatsu, a high-school student who, after a great anime introductory video, finds himself as an astral body ejected from his physical body, which is inhabited by an unknown assailant. Yuta’s only companion — well, the only one who can see him, anyway — is the rather abrasive ghost cat, Chiranosuke, who guides Yuta through the process of becoming a spirit powerful enough to save humanity from an as-yet unrevealed impending disaster.

Chiranosuke’s most valuable advice? “If you see panties twice in a row, seven billion people will die.” 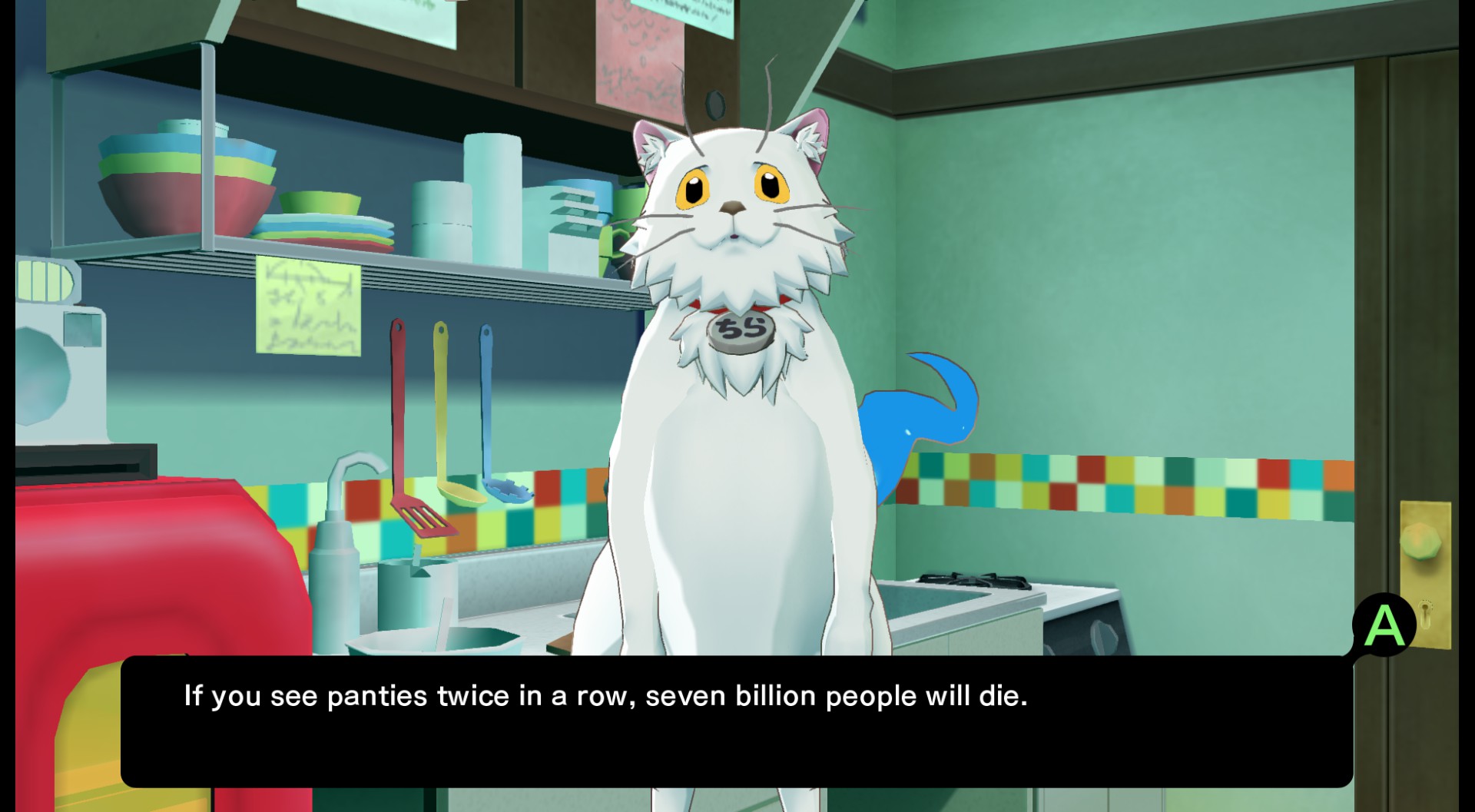 Punch Line’s strongest feature by far is its absolutely crazy and irreverent script. Yuta and Chiranosuke play off each other well and the silliness of the panties-caused extinction of humanity is nicely offset by a rather convoluted and interesting, if not altogether atypical of anime, plot. I didn’t even pick up on some of the plot twists until they happened, or mind the few tiny plot holes I noticed, so taken was I by the whole production.

The script wouldn’t be what it is without some great characters, though. There’s the typical powerful and mysterious enemy, the heroes with a secret past, and, most importantly, some really fun character interactions. The four girls who live with Yuta in the secluded Korai House apartment building — Meika, Ito, Rabura, and Mikatan — all fill the roles of some of the expected anime character stereotypes pretty nicely, but the interactions between them are at times both hilarious and emotional. While there are some near-heartbreaking moments, it wouldn’t be an overstatement to say that Punch Line is the funniest game I’ve played in years. I was literally in tears of laughter in one scene focused on Ito.

Punch Line is a good looking three-year old PlayStation 4 game, but I think it’s reasonable to have expected better on PC.

The game includes some excellent high-quality anime videos, which look and sound great.

In-game graphics are all 3D, using CryEngine, and look pretty nice, if a little dated now. Textures are a bit lacking, anti-aliasing could be better in some spots, and special effects are few and far between. Models are good, and it’s great to see how closely they match the hand-drawn anime characters, but they have a pretty limited set of body animations and facial expressions, to the point where they often look a bit out of place. A few of the animations look a little wonky, too, and I noticed a few very minor clipping issues.

The music soundtrack is typical of the genre: plenty of J-Pop-style tracks and catchy tunes. Sound effects are used well, if not particularly memorably, and all dialogue is spoken in Japanese by professional-sounding voice actors. I don’t know if they’re the same actors as in the anime, but they sound good regardless. 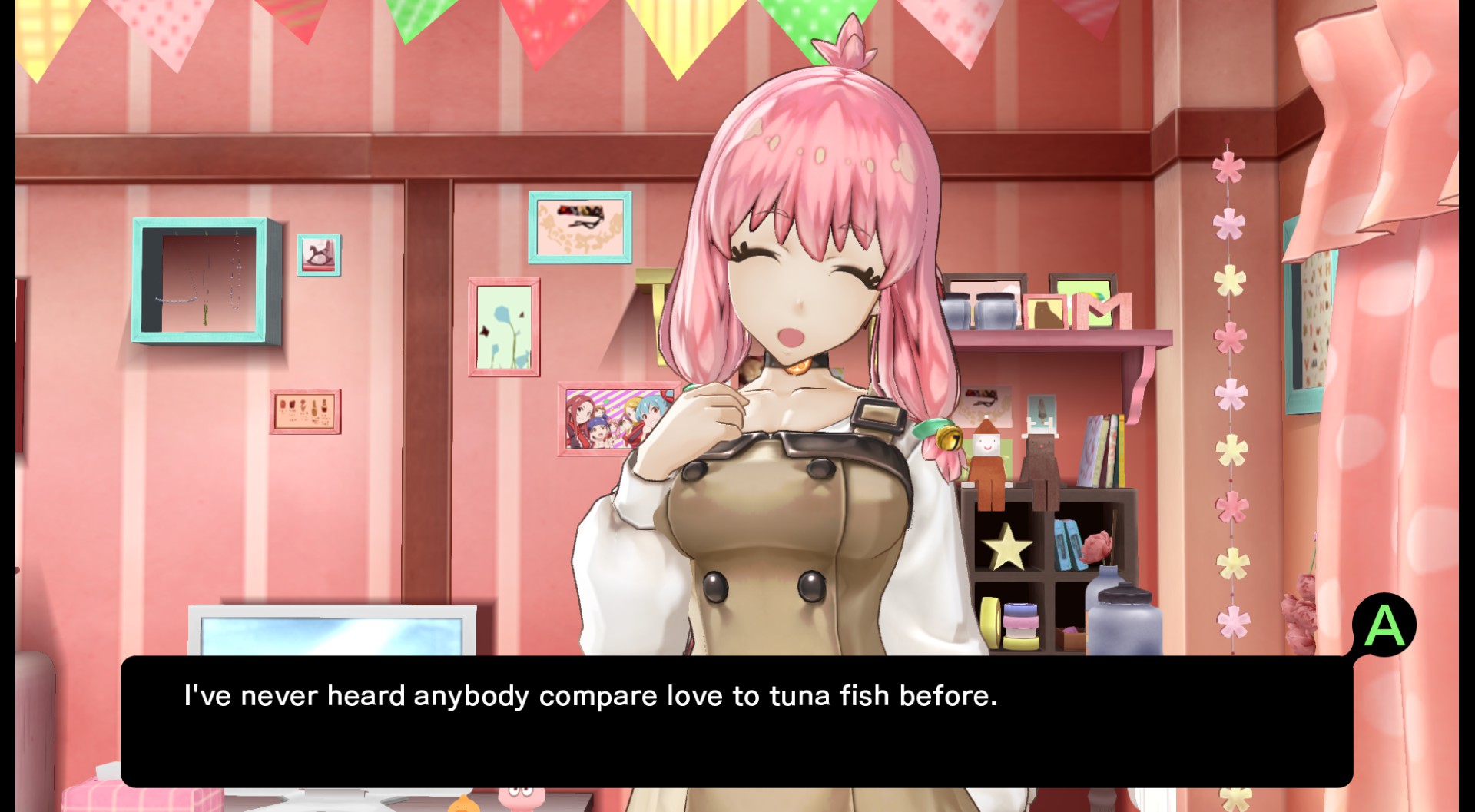 The English translation is mostly excellent. I can’t read Japanese, so I don’t know how closely the English matches the original, but it all makes sense and has only a small number of minor errors: a good result given the sheer amount of text that’s here.

PC options are sadly lacking. There’s only a single graphics selection: windowed or full screen. There’s no borderless-windowed mode, no resolution setting (I believe it’s fixed to 1920×1080 in both modes), no vsync, and no advanced graphics settings for turning features on and off. There’s also a weird problem with some (not all) animations running too quickly, which I was only able to fix by running in windowed mode. This resulted in the need to configure my Windows taskbar to hide itself and even then the top few pixels of the screen were used up with Punch Line‘s own title bar.

Steam features are non-existent. There are no Achievements or Trading Cards and, I believe, no Cloud Saves. The Achievements are especially sad, since there were PlayStation trophies available in the original; surely it’s not too much to ask to have had those ported to Steam?

Punch Line‘s gameplay is a reasonably even mix between visual novel and some very basic puzzles, the whole lot interspersed with various short anime videos. Apart from the videos, the whole game is presented in full 3D, though with fixed camera positions and angles, making it rather unusual for a visual novel. 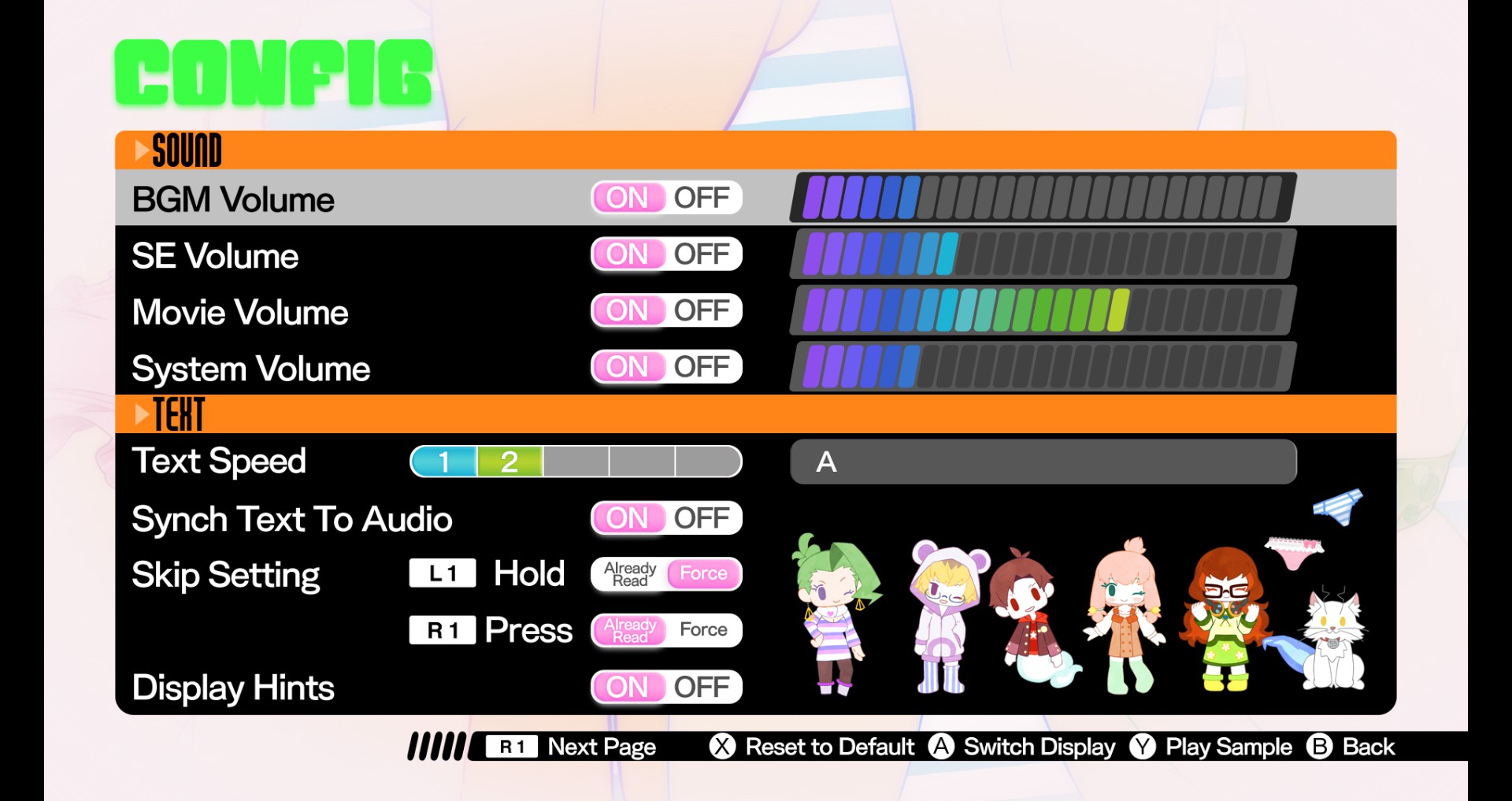 The visual novel sections include most of the basics of the genre: skip, auto advance, and log/history, with plenty of save slots and a quick save option. It’s a little more clunky than the widespread VN engines, but it works well enough. These parts are essentially “kinetic”, with no choices for most of the game. In the second half there are actually some choices to be made, but in each case every choice has a correct and an incorrect answer, with the incorrect answer immediately leading to the destruction of humanity. There’s only one ending to the game.

The puzzle parts are more interactive. These are divided into two parts in the early game: moving objects around to scare a target girl in order to gather fragments of her soul, and setting up chains of events (“Trick Chains”) in order to achieve some sort of in-game goal.

The first of these has Yuta confined to a single room and interacting with a single girl. You can view the room from a number of different fixed points and pan the camera about within a restricted range. The game highlights objects with which you can interact and you press a button to cause a pre-determined animation and event to occur — scaring the girl, if you’re lucky. Once you’ve scared her enough the scene is completed and Yuta gains in spirit level and power. 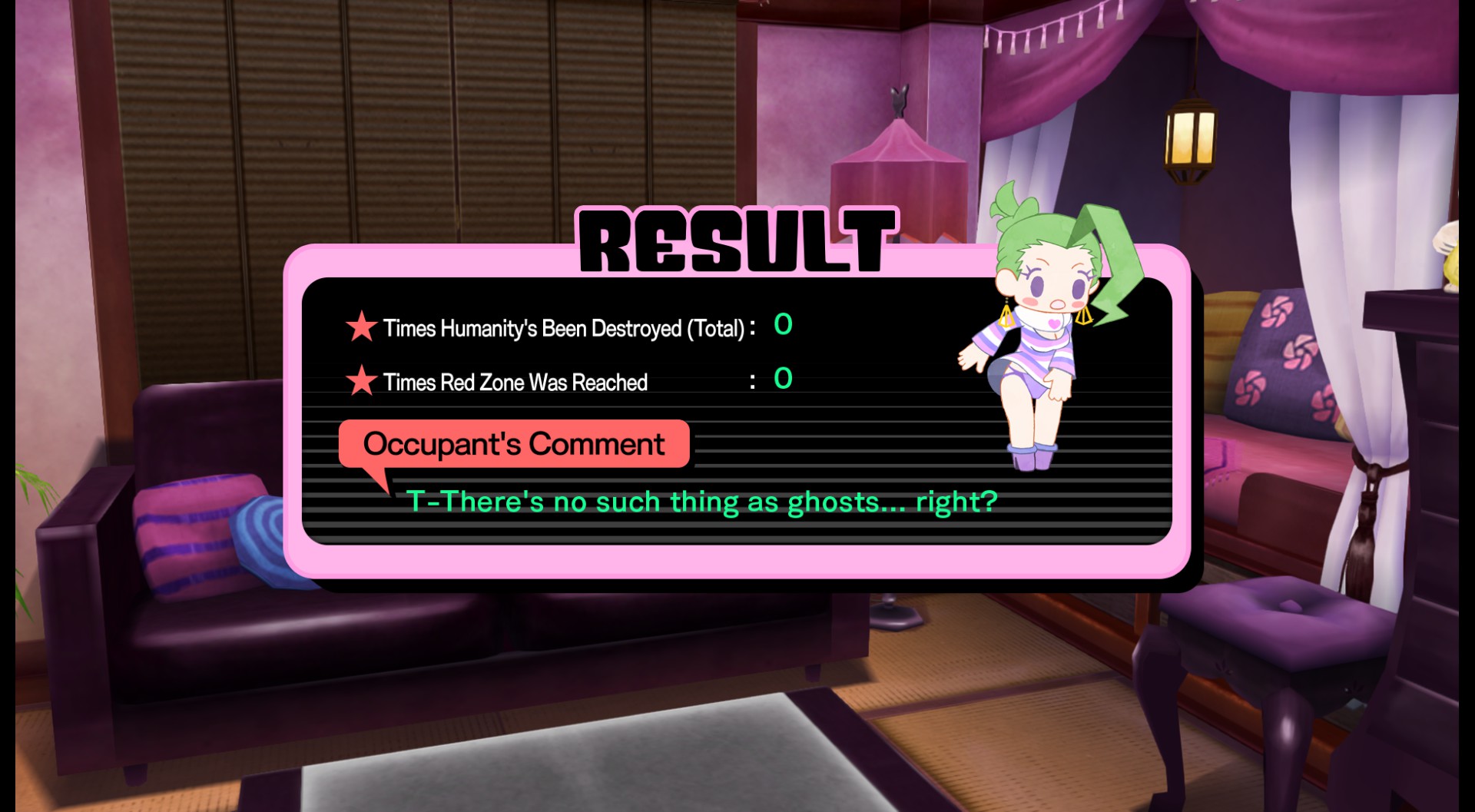 The Trick Chains use the same interface, but allow Yuta to move around more of the Korai House and interact with more of its inhabitants. These are essentially trial and error, with some of the results being completely unobvious until you begin the chain and see if you got it right. Normally there are only a few choices at most, though, so you’ll usually get it right first time.

In both cases, there’s not really any way to lose the game; if you make a mistake on the puzzles or look at too many panties then humanity is destroyed, so you know, no pressure or anything. 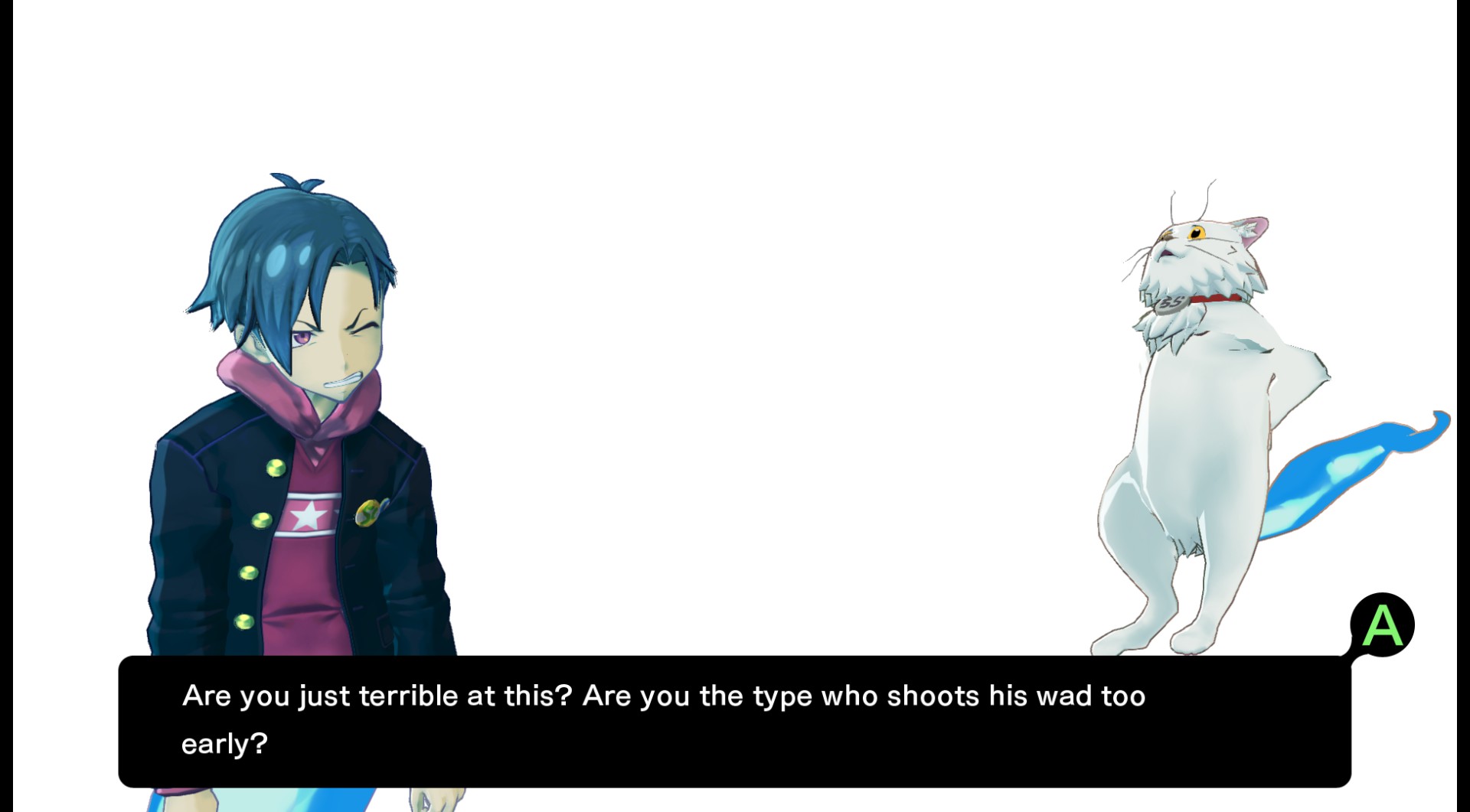 The interface in these sections is a little cumbersome, with the camera panning very slowly and controls sometimes feeling a little unresponsive. This is a bit annoying in the few timed sections around the middle of the game, in particular. I’ve destroyed humanity a few times by not being able to move the camera fast enough away from some particularly “attractive” panties, but it works well enough.

So it’s another boobie VN then?

While Punch Line has some sexual innuendo, and the whole premise of panties-inspired doom obviously allows for a number of gratuitous panty shots, it’s definitely not a “boobie” game. The closest any of the characters comes to having sex is rubbing herself on a doll, and there’s no nudity at all. There’s an unlockable gallery of panty shots, but they’re not exactly explicit or graphically sexual. It’s silly and it’s sometimes slightly titillating, but it’s hardly adults-only material.

Yet somehow in Australia that translates to a R18+ rating for “High Impact Sexual Themes”. I really wonder what drugs the review board were taking in order to rate the game this way. Yes, it’s risqué, but “high impact”!? C’mon, that’s ridiculous. Oh well; I guess I shouldn’t complain. At least it wasn’t banned here I suppose.

I missed my colleague’s PlayStation 4 review during the months waiting for the Steam release. dangerhidoltage’s review of Punch Line was written in late 2018, shortly after the English PlayStation releases became available. Learning of danger’s review after acquiring the PC version I decided I’d best complete the game and get my own thoughts down before reading it.

I think it’s fair to say after reading danger’s review that we agree on the core elements that make Punch Line great: the characters and the story. Danger has more familiarity with the source material, having seen the anime, but after reading his review I think I’m lucky I hadn’t seen it; it sounds like it might have spoiled the surprises that the game has in store. 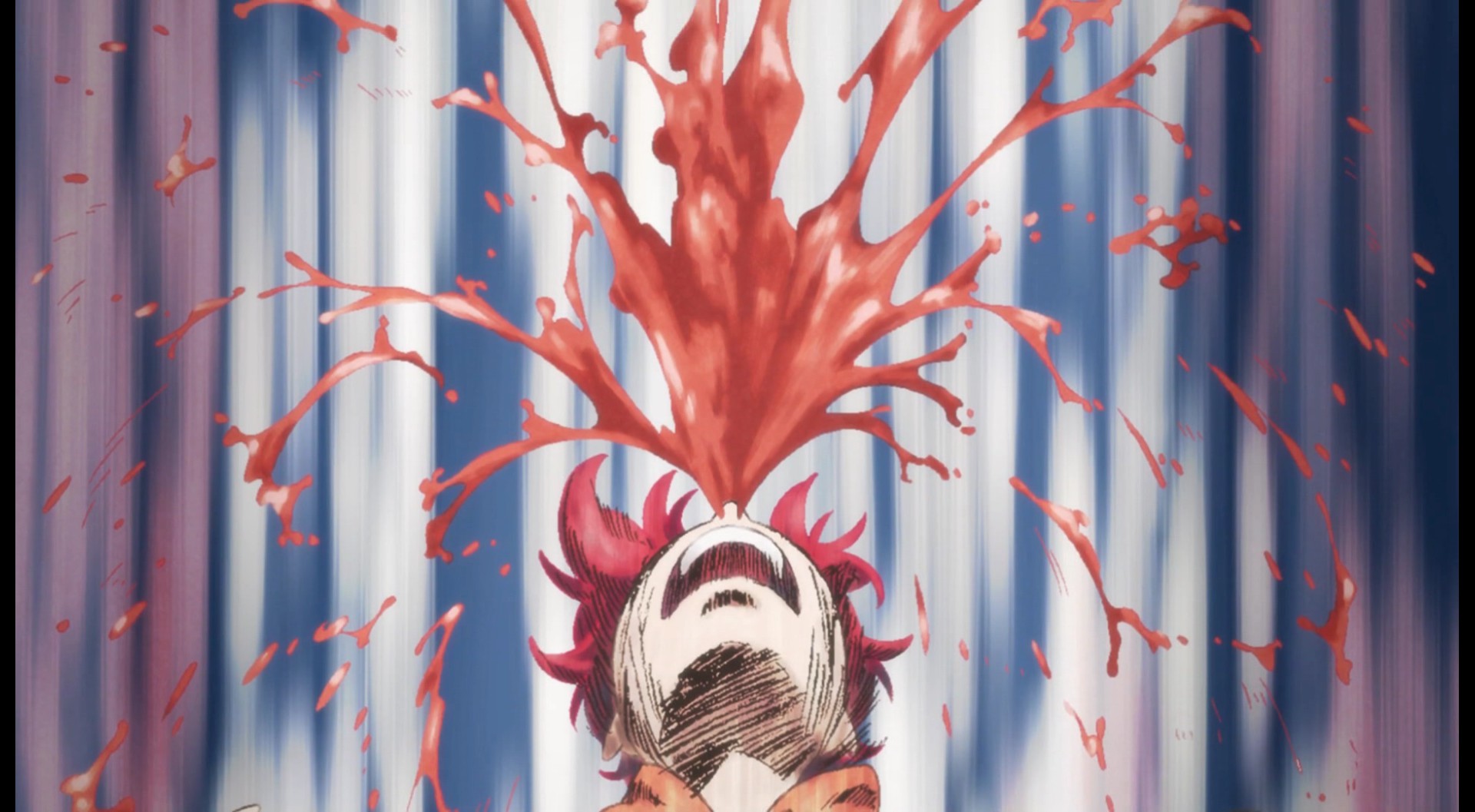 Given the somewhat-disappointing lack of PC improvements, then, it’s not really that surprising that I’ve rated it exactly as he did. It’s still pretty expensive for the length (I got about 14 hours out of it) and the lack of Steam Achievements removes most of the motivation I might have for going back and playing it again. But it’s an impressive work of anime art-turned-game all the same.

Punch Line is a fantastic game. The story is great, the sense of humour is completely bonkers, and the game is so much fun. The premise is ridiculous and the script is, barring a few minor grammatical errors and tiny plot weaknesses, hilarious. It’s one of the most entertaining games I’ve played in a long while and it’s had me in tears of laughter.

This makes it all the more disappointing to say that the Steam version is a bit of a poor PC port. If this is your only chance to play the game then definitely get it, price be damned! But if you’ve already played it on another platform then it’s probably not worth buying it again on Steam.