Fight through the battles like a ninja god in a first-person, cyberpunk-style and melee-heavy arcade arena world.

Cyberdrome is a Free To Play arcade score attack game where you play as a cyborg ninja with the task of surviving waves of robots to wrack up as many points as possible. Armed with nothing but a cyberpunk samurai sword, you will jump, dash, slash, and deflect your way to the finish and the top of the leader-boards!

Cyberdrome is a short game created by a small student team at SMU Guildhall, with a development cycle of 15 weeks. For a student learning project, I will say the game is very fun and well built for the most part. But before we get into the real meat of the game, I have to nit pick the options/settings. My biggest issue with the game is the FOV seems a little low. I found myself getting a little motion sick, or my eyes would be strained. On top of that, even looking around to find the robots was a struggle as I found it easier to miss them with the low FOV. It’s nothing game breaking, but it definitely hampered my enjoyment a little. Now I don’t have the best PC in the world, but I did have some stuttering and lag. I was not able to run the game at max settings, and had to drop them down to medium to keep it at a steady frame rate. If you are expecting some really detailed graphic options, you won’t be finding those here. 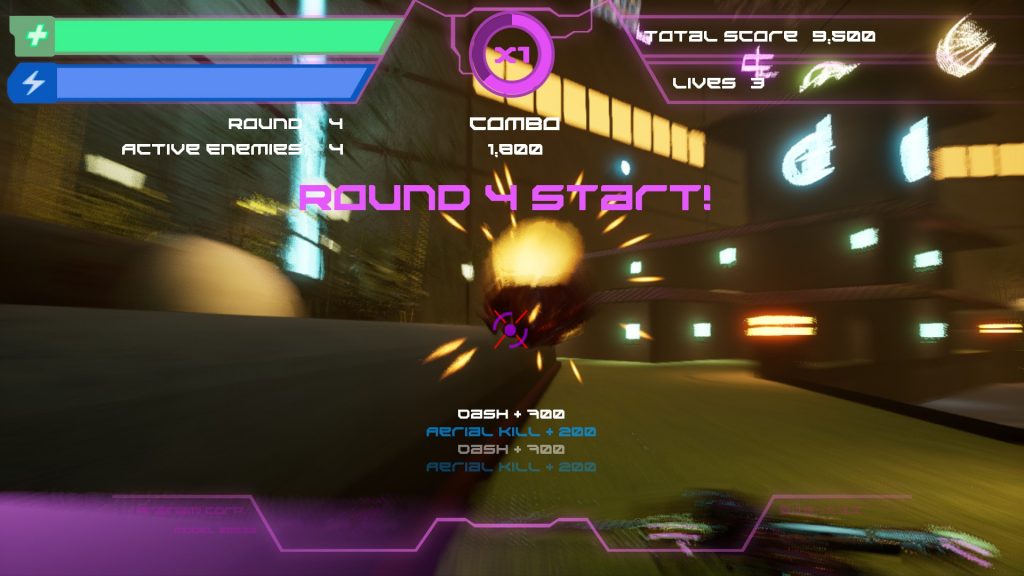 In terms of graphics, they are alright. There are lots of bright neon lights to give it that cyberpunk feel, though I feel they could have done a little more. My big issue though is the inclusion of a “motion blur” which also made the game a little harder for me to play. Motion blur is something that I absolutely hate in games! Motion blur just makes games look worse, and you can tell from a few screenshots that I’ve taken. It makes it harder to see, and even harder to capture nice looking screenshots. With a game that involves lots of moving/jumping/dashing around, the game just looks like a blur most of the time. Sadly, there is no option to disable it.

My other little issue with the game is the HUD just seems too big. The HUD easily takes up a third of the screen. Yes, it is easy to read the info on it, but I felt it covered a little too much of the screen, and would have been better if we were given an option to scale the HUD so that we could shrink it more so we could see the combat better. The HUD is pretty straight forward, it gives you your health, focus bar, combo counter, score, lives, and active enemies. However, I would have liked an option to toggle a timer, as there is an achievement for completing levels in a certain amount of time, and you have no idea how well you are doing until after you complete the map. 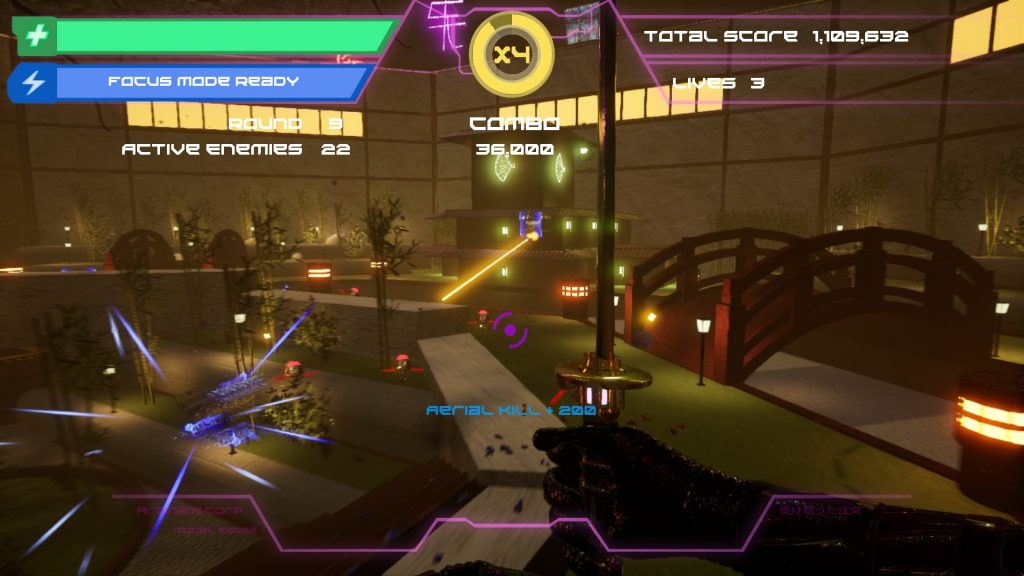 Now for the real meat of the game, the combat. You are armed with only a cyber sword, which you use to slash, dash, or deflect incoming projectiles back at the enemies. The combat the pretty straight forward, you slash at them, if you hit them they die. There is nothing really groundbreaking, but it’s designed to be fast and quick which it does do well. You have a double jump that you will have to use to jump up onto buildings to traverse the levels and find the robot enemies. You are also able to use a dash attack, which is honestly the best and only attack you could use in the game and win. It’s a quick dash going forward that kills any enemy that you happen to come in contact with. You can use this dash to combo multiple enemies for higher scores. However, using the dash can result in you dashing and being caught on some objects, or in some rare cases, not dash in the direction you are moving/looking at.

You are also able to deflect enemy laser projectiles with your sword as well. This ability I didn’t find very useful, as the accuracy wasn’t always consistent, and didn’t earn the most points. Plus it slows you down, and only protects you from the front (obviously), so enemies can still deal damage to you from the sides or you can take damage from the bigger laser beams or the mines. The final ability you have is the Focus move, which is a slow-mo. Once you have energy in your focus bar, you can toggle the Focus mode, which not only slows down the game but also highlights enemies. Killing anything in this mode additionally gives you a slight bonus to points. Deflecting in this mode also gives you more accuracy. Using Focus will deplete the Focus bar as it’s active. This bar will replenish slowly over time or fill up small bits as you kill enemies. You also gain a little bit of health back for every enemy you kill.

According to their website, the page stated that there was a “Wall Run” though I have never been able to get anything to work, so I assume it was a planned feature but was never implemented. Not that a wall run would be really be needed in this game. 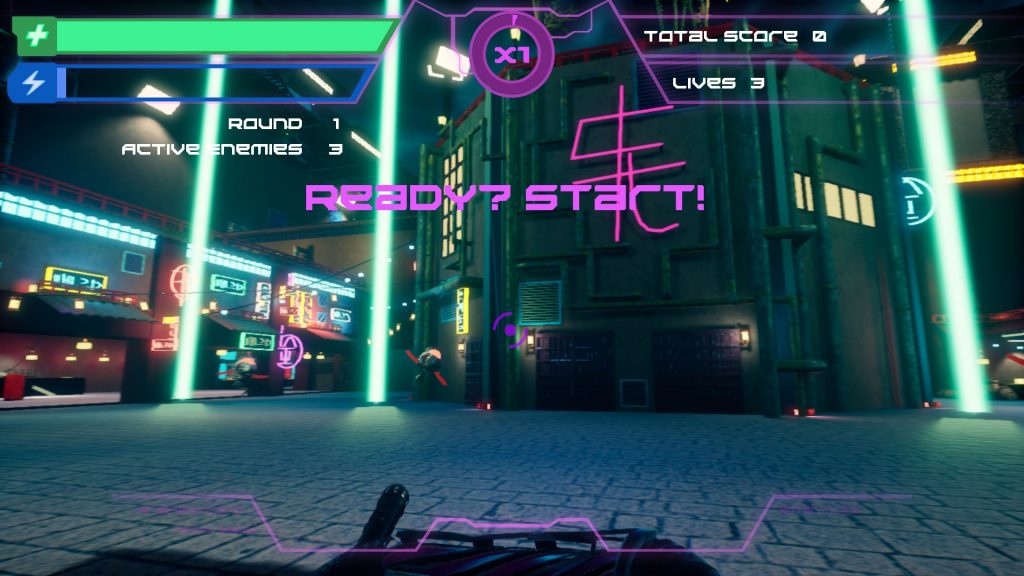 The selection of enemies is fairly limited and pretty simple. The basic and common enemy is the small red drone that shoots small laser projectiles, which are the only attacks that you can deflect back and kill them. The second kind is a blue charger drone which will give a charge up warning sound. Killing this drone will give you more Focus. The third drone is a green bomber drone that will lop timed bombs at you. The bombs will give off a beeping noise and show a radius of its explosion. These bombs will also detonate if you happen to touch them. Killing these bomb throwers will also give you a bigger health bonus. The fourth drone is a bigger front facing shielded drone that also has a sweeping laser beam. They are fairly easy to avoid and are easy to jump behind and take out. The fifth and final drone is a big transporter type that will spawn in more drones for you to fight. Like every enemy though, they all die in one hit. You would expect the bigger drones to take a few hits. Across the board though, the AI for the drones is basic, tends to be mindless, and often will get stuck on the map. 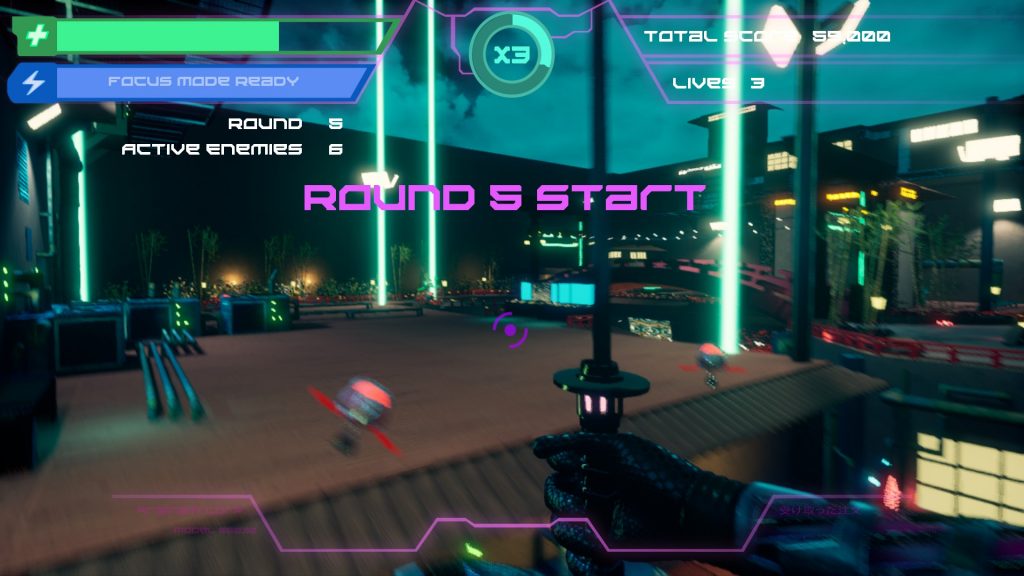 Cyberdrome has three maps to play on. The first map, “Zen”, starts out as a small area, then as the waves progress it lowers walls on the map to be more open. The second map, “Dumpling Street”, is a small city-like area that does not offer anything new other than more rooftops to jump across to fight on. The third and final level, “Acid”, has you progress up a tower as acid rises after a few waves. As you may have guessed, the acid hurts you, so avoiding the pool of acid is required. This map was the hardest to traverse, as it had the most platforms and requires more jumping around. All in all, the maps do offer a slight difference and unique experience, but all maps will have issues with the drones being caught on something and will be annoying. It’s more prominent on the bigger maps, as you have to spend more time running from one end to the other to kill the stuck drones, mostly wasting your time.

Now people have been complaining that the game lacks any story, but this game is NOT a story game. It’s a score attack arcade game! There doesn’t have to be a story! People have also complained that there needs to be more weapons (like a ranged weapon) and pickups/power-ups. Though I have to say I disagree with wanting other weapons, as the weapons feel fine, and adding in any form of ranged weapons could break the game flow and style. Power-ups, on the other hand, I feel they could have totally added power-ups like super speed, or an infinite focus for a short time. It could be something they could have added, but I don’t think it would be needed. And anyone that tries to compare this game to Overwatch‘s Genji really need to re-evaluate their game choices.

Once you have survived the 10 rounds of drones, you are given a score and stats screen. This is another issue – the “leader-boards” are not live. They are local only, which has made some people disappointed and it does leave that little bit of competition lacking in the game. This is a minor issue, but I know has some people are upset over that. 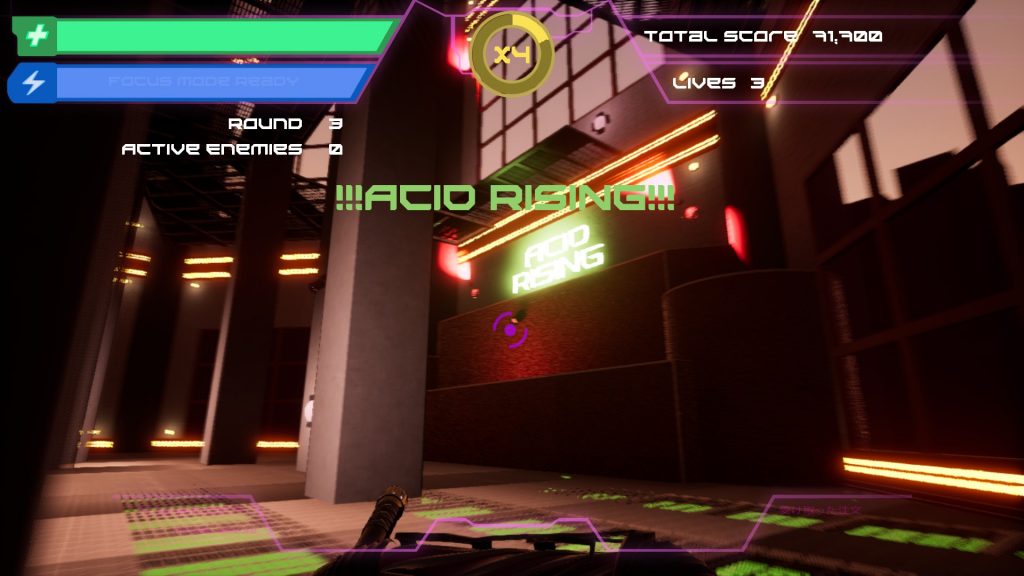 Now for the real big problem. Cyberdrome contains broken achievements. I’ve completed every map without using Focus and never got the achievement for completing a map without using Focus. I’ve even completed the second map, Dumpling street, and I didn’t get the achievement for completing it, or the score achievement, OR the no death achievement! As for the speed run achievements, it states that no one as ever completed them, but from personal experience, I’ve never been able to reach the time requirements, as with the bots getting stuck around the map, you waste more time running to find them, so I’ve never been close to earning them to even know if they are broken or not. Now a Dev has said they knew about the achievement issues, but have yet to announce a fix or anything. 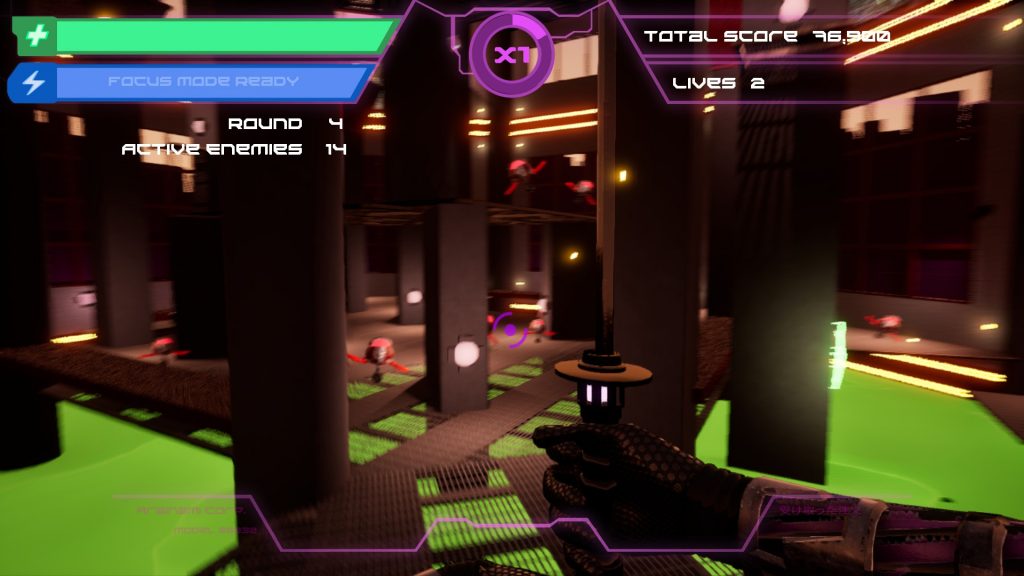 There is one major downside to Cyberdrome. With the game being a school project, they stated that there are no plans to work on this at all after release. Meaning all these problems the game has will probably never be fixed. Even with a Dev commenting on the forums about the broken achievements and what not, I’ve not seen or heard of any progress on fixing them. This was why I waited so long to review this in hopes they would fix it, but as it currently stands as I write this, it’s not fixed and looks like it probably won’t be fixed ever. Please prove me wrong Devs! 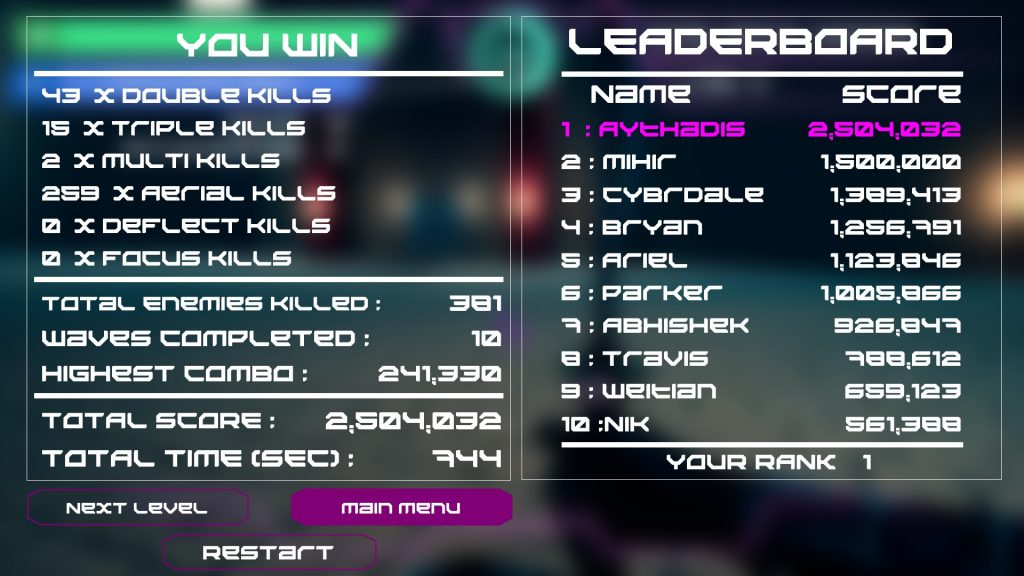 In the end, as a student project that was made in a short time and released for free, I can’t knock it too hard. Had they charged money for it I’d have been a little harsher. If you are someone that just wants a short little game to have some fun, I can easily recommend this game! However, if you are someone that wants a 100% completion, you’ll have to look hard at the broken achievements and the fact there is no real say about if the devs will fix it. I sadly can’t recommend it based on that criteria.