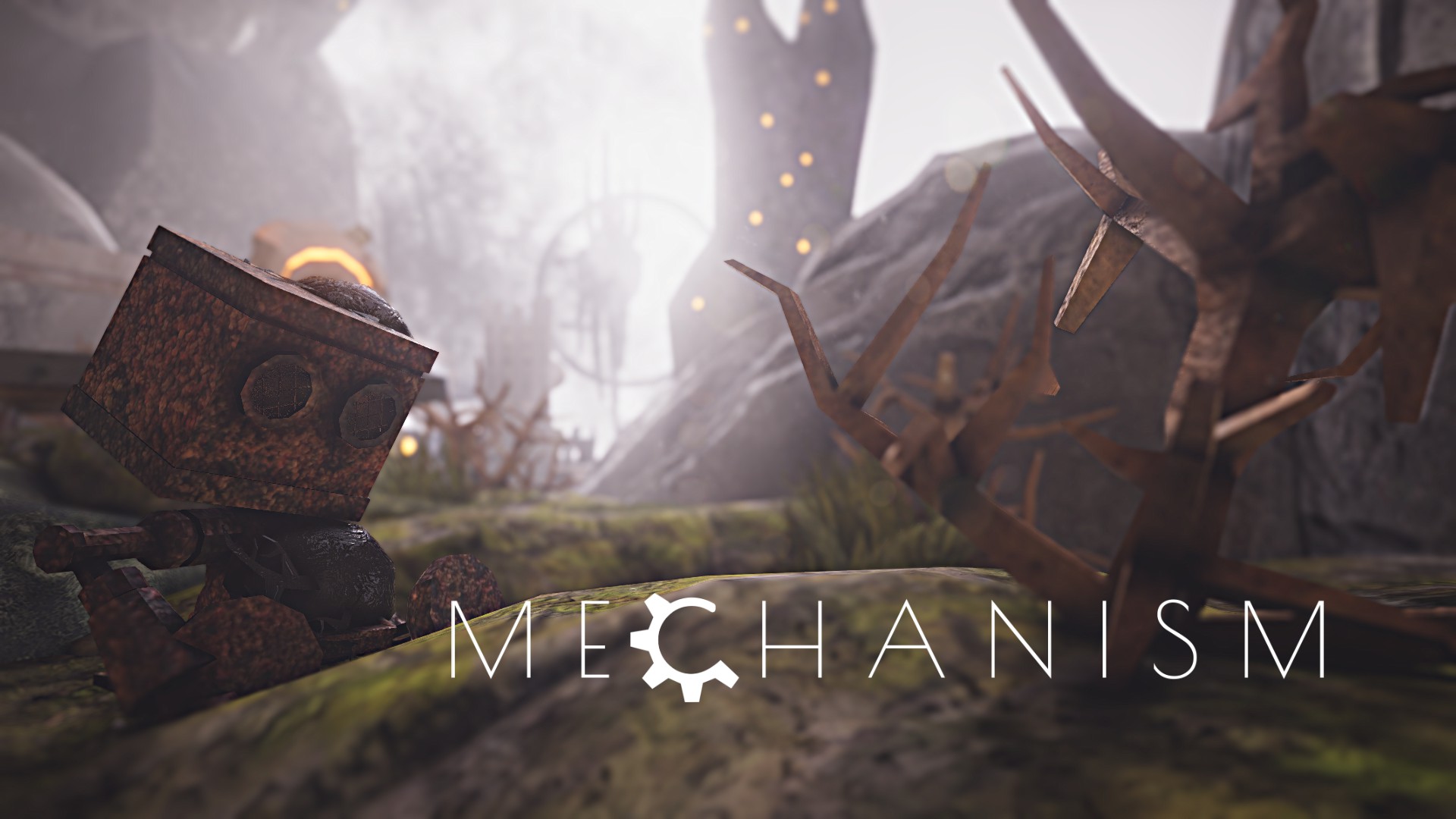 A unique puzzle game about a robot in a ruined world infected with the mysterious “Phlegm” that raises more questions then it answers, and it is filled with bugs.

Sometimes A Story Can Start In The Middle

Mechanism is an Indie title created by one person by the name Alexander Goodwin, in which you play as a rusty looking mechanical robot in a steampunk world which has been infected with a strange disease called “Phlegm” (pronounced as Flegma? based off the store page.). You wake up and find out that this world has changed. Black tumors of Phlegm are everywhere and have caused the death of countless robots. You must traverse the area solving puzzles and riddles using various items to advance, and alter the world around you based on your actions. Will you spread the Phlegm to corrupt the world, will you find a perfect balance, or will you free the world?

The main objective of the game is to collect the parts to fix the “Mechanism”, in order to communicate with the main source of the Phlegm, that big blob that hangs off in the distance that occasionally gives out a thunderous horn that shakes the world. This involves traveling to different parts in the area, collecting gears and power cores to open up doors to advance to the next areas. You can only carry two items at a time, and if you become contaminated in Phlegm, you will occasionally drop items that you are holding in your hand. Thankfully, there are a few upgrades throughout the game that give you more resistance to the Phlegm and a better grip on items. However, these items require other items to fix them, and bolts to purchase them. As you progress, there are Phlegm monsters that will attack you, thus making the journey harder. These monsters range from blobs that drip Phlegm when they hang from the roof, to spiders, corrupted robots, and the terrifying “Catchers”. Most of these enemies are easy to avoid and don’t pose too much danger, but they do make you think of your actions beforehand. There is an interesting mechanic though, where as you become more infected with the Phlegm, the robots might not attack you, and only when you become infected will you encounter the Catchers, who will grab you and take you to the “Unconsciousness” world. You have to venture into this world to gather 4 parts of the mechanism, and if you get caught there, the corruption of the world increases, and it will decrease if you successfully escape. 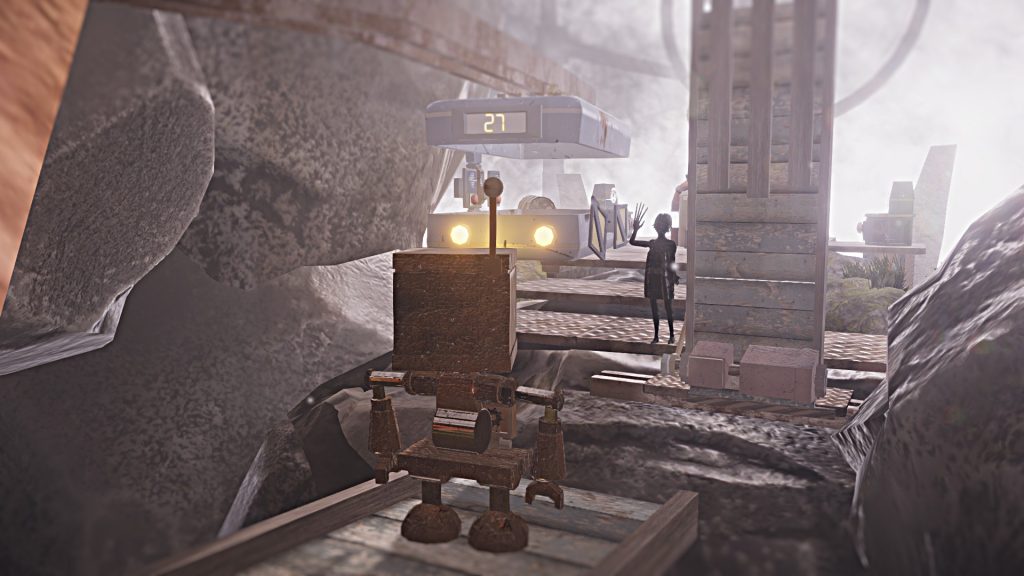 The story of Mechanism is very minimalist, and leaves most of the story left to the player to interpret, which in itself isn’t a bad idea, but in this case, I found myself not really understanding lots of things, and I ended up asking more questions than getting answers. Throughout the world, you will see this lady, who is assumed to be made out of the Phlegm with long claws waving at you, and she will disappear when you get close to her. Nothing in the game explains anything about her or why she’s there. The same goes for these giant robots that sit in the world, they are just kind of there. Nothing really says why they exist in the world, or what purpose they had. The only real dialogue in the game is either present in the loading screens, or the Snails in the world. Once you give these Snails two mushrooms of the color they want (the same color as their eyes), they will spawn through the world and provide some insight on what you might need to do, what to collect, and where to look. They do shed some light on the world and its creatures, like the Catchers and the Unconsciousness world, but other than that, not a whole lot more. 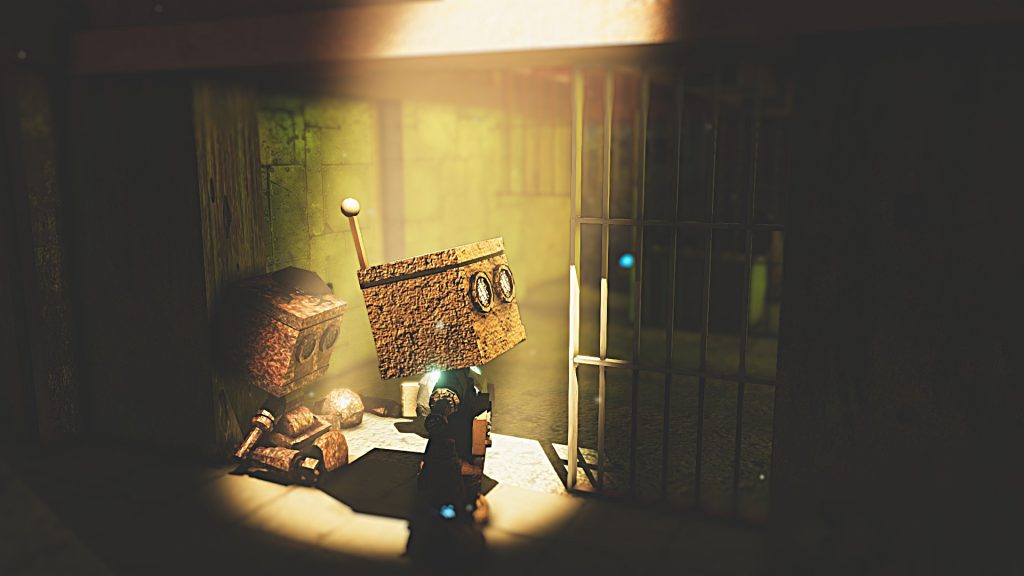 Once you finally reach the Mechanism, that is when you start encountering the Catchers. These tall lengthy creatures with a TV for a head will only appear if you have a medium to high Phlegm contamination on yourself. They will then be standing in areas around the map, and they will be partially invisible except for their face. When they are about to grab you, there is a small window where you can use the shock ability to avoid it from grabbing you, though this does not always work. Though, as stated before, you have to go to the Unconsciousness world as there are four items that you need to collect from this world, without getting caught. Don’t want to be infected anymore? There are some light devices designed to remove Phlegm from you by standing besides them.

Now, let’s touch on how the saving system works. There are two ways to save. The first way is when you leave an area to move onto the next (which has a loading screen), and this will save you where you enter the area. The other way is to use the Photometers which save the position of all unused items (which is basically saving the game). I recommend saving quite often on your first time, as dying could send you back quite a way if you did lots in an area and didn’t save. But what happens if you accidentally drop an important item off the cliff? Don’t worry! There is a dandy item that, once used, will reset any unused items to their normal spots. This is also the only way to reset Anti Phlegm Bombs, as reloading or leaving the area and coming back doesn’t reset them. 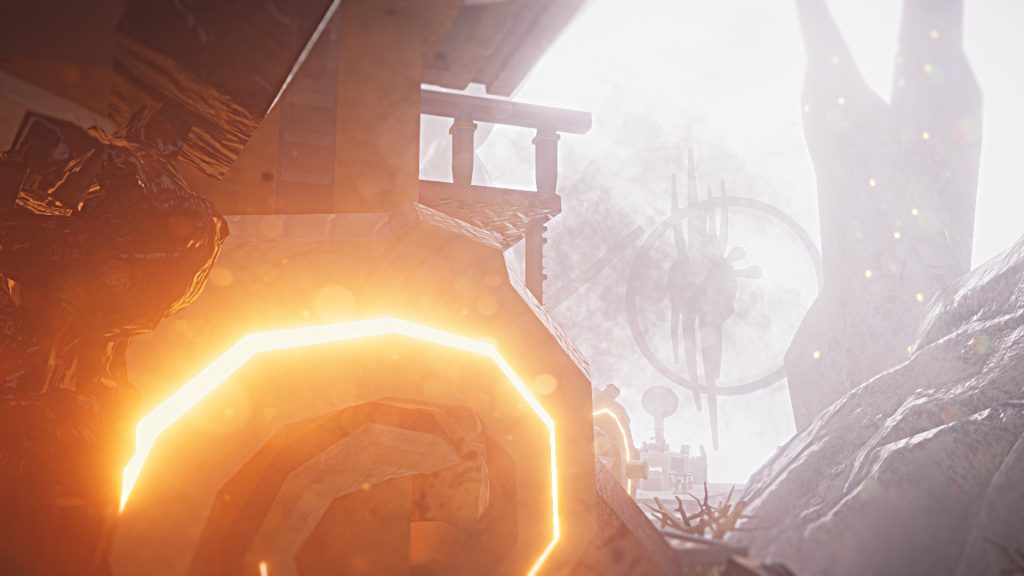 I Can Feel The Rust

So, the first issue that I had with the game was the graphics. I know I don’t have the best computer, but I am able to play most graphically demanding games, but this game is poorly optimized. On maxed settings, this game chugs at a terrible 10 FPS or lower. Even lowering the settings to about medium the game can barely keep the game above 20 FPS, which I kept it there, as going any lower just made everything look extremely ugly. This game also uses lots of motion blur and depth of field, though even disabling it, there is still lots of blur in the game with textures being the worst of it.

Some areas have questionable textures and models, and when I say that, I mean in the sense that some things just don’t feel like they belong. The worst one being the city area, where the buildings in the background just don’t feel like they are part of the world, as they just look like generic apartment buildings. Even with that though, there are some spots that do look good. The lighting in some areas like in the basement looks very nice! It can really set the ambiance to give you that dark and mysterious vibe and make you feel nervous about wanting to go forward. There is one part where you need to hold a light and go through a small room full or broken robots, just to have some come alive as you walk past. It was one of the parts that made me jump. Even in the Unconsciousness world, it’s enveloped in a fog and gives you that helpless feeling and being chased. Combine that with the static sounds of the Catchers and seeing those tall creatures walking towards you sets it up nicely.

The audio and music, for the most part, are fine, but there were some audio tracks that just sounded horrible! The biggest one being the moment you walk out of your house at the start, it has a loud horn in it, and it just does not sound nice. There were a few other tracks that just didn’t sound like they flowed, or were somewhat off-putting. Otherwise, most of the other tracks fit perfectly in the game and fit the ambiance to where it was placed in the world. Again in the robot room in the basement, the music ambiance fits that part so well! Even when the main Phlegm gives out its giant horn that rattles the world, it just sounds great and monstrous. 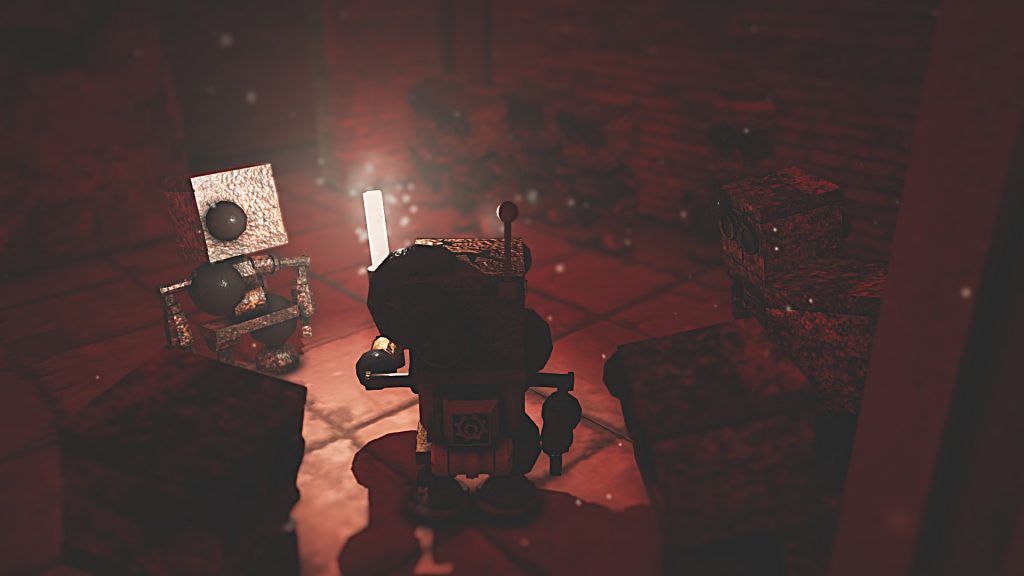 Besides the performance issues, there are some pretty bad bugs/glitches in this game. The worst one that I experienced was having certain items I needed totally glitching out and not resetting no matter what I did. I’ve had this happen to me twice and had to completely restart the game twice. Even on my third time through the game, I had a certain gear that was needed to craft the backpack not spawn in, even after trying to reset everything. Though getting the backpack wasn’t required to beat the game, it was kind of annoying. Another glitch I experienced was having the train being backward, so I was not able to get on the train, thankfully reloading fixed that issue. I’ve had the Anti Phlegm Bombs not work on the monster that can be defeated with them, and not have them reset properly. I’ve had Catchers glitch out trying to grab me and then just end up standing there doing nothing.

Despite all that, the most annoying one by far was just randomly getting infected by Phlegm when there was nothing around to have caused me to get infected. There will be times I’m just walking down a path, and then boom, some Phlegm contaminates me. I’ll look around and see absolutely nothing. I’ll even walk back and forth where I got infected and nothing will happen, or in some cases, I’ll have Phlegm infect me through walls or floors. Other instances of this are when I used the umbrella to avoid getting infected, and the Phlegm just goes through the umbrella and infects me.

One thing I did also have issues with was the camera. There were times when the camera was just so close to the character that I couldn’t see anything, or the camera got stuck on something. The worst area that I had this happen was in the basement where it’s more enclosed and cramped. Combine that with how blurry the game makes things, and it’s hard to really see where or what you are even looking at until you are rubbing your face right on it. Even then, you will mostly be seeing the back of your head. A minor complaint that I have with the saving system, is that once you beat the game, you can’t reload the game and do another ending, you will have to restart the entire game. The game isn’t very long, but it’s still kind of annoying. It’s more annoying that you can’t skip the introductory video, as you have to sit there and wait a few minutes to actually get back into the game. 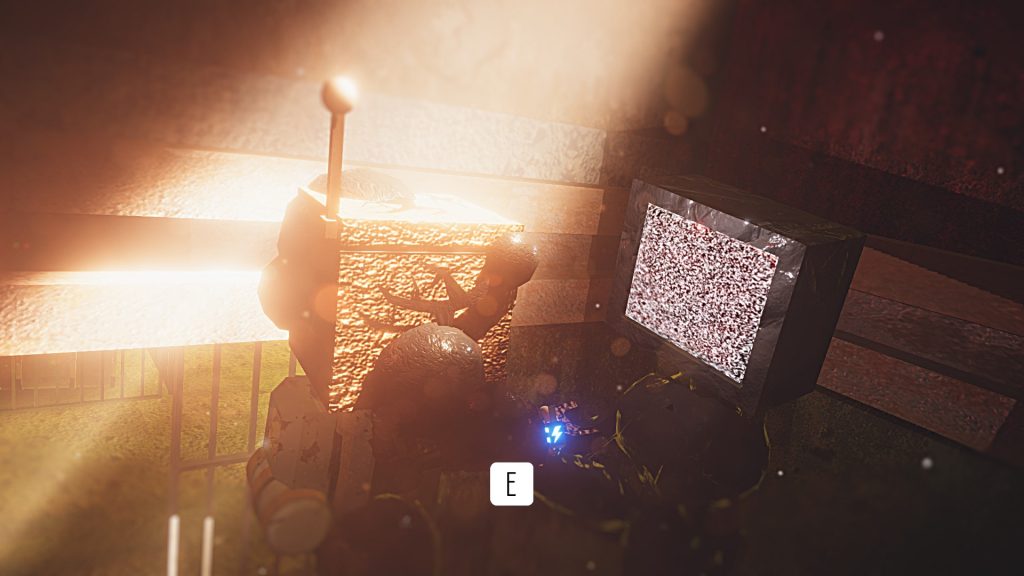 In the end, even though the game was enjoyable, it would have been even better if it didn’t suffer from all these performance issues and glitches. This game can easily be completed in 2 hours (unless you have to restart like me), and should take about 5 hours to complete everything in total (minus one achievement that I can’t seem to get). For $15 it’s a bit of a steep price considering how short the game is. I say it should be around $10, but even then, when it’s on a sale it might be worth looking at if this game looks interesting to you. This is not terrible, but quite fun if you look past the issues!