Dive deep into the sea, explore shipwrecks for treasure with your friends, and leave their skull behind as you steal their painfully acquired gold back to the surface.

Not another local multi-player game

Aqua Lungers has aquatic platforming levels tasking players to dive deep into the sea in search of shipwrecks to bring their treasures back home. The game is played with 2-4 players on a split screen and it is also possible to play alone in single-player (albeit against a more populous hostile fauna). Each player (or team) has their chest to fill, and the first to reach 3000 points wins the level. It’s not possible to bring all the loot back in one go, there is only a limited amount that can be carried at once, so several dives are necessary, leaving a lot of room for friendly backstabbing. 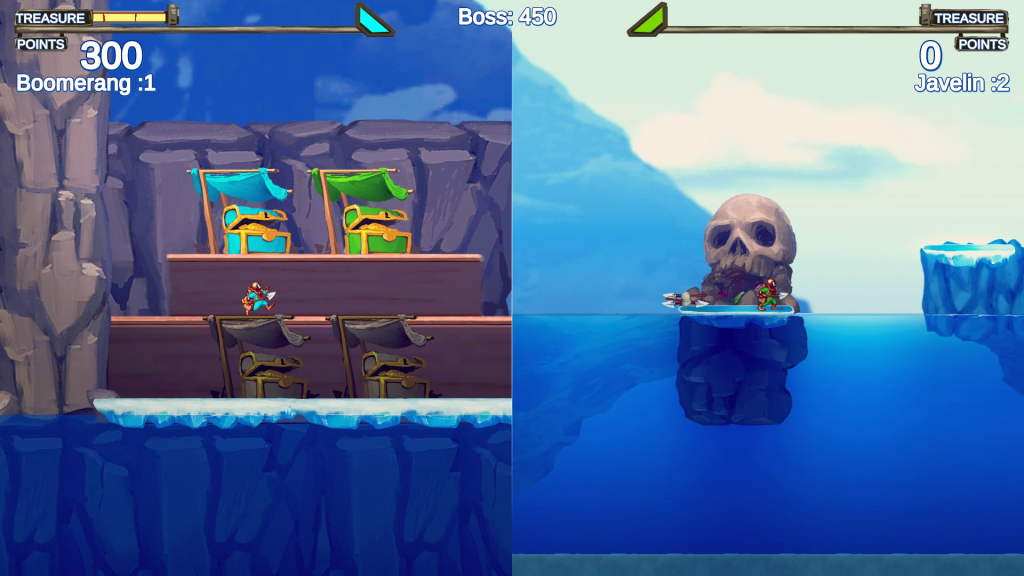 Players cannot kill each other with the base attack, but each stab with their little pike will temporarily hinder and force them to drop some of their precious gold. However, advanced weaponry can actually kill, whether intentionally or not. It’s not always in the best interest of players to attack each other though, as the monsters can win too—what a brilliant idea!

There are several types of enemy fish that can nibble players to force them to drop their gold, and players can defeat them in return. But each map also has an invincible boss, a huge monster that can actually kill players to send them back to their spawn. This monster can also collect points over time and win the round. This mechanic is great, as it can often change the dynamic of the game from competition to cooperation. If a boss proves too difficult and the players want to travel to the next stage, will they be temporarily forced to band together and maybe drop all of their gold in the same chest? But whose chest? Won’t pride or rivalry get in the way? You can either see this as a zero-sum game, in which the loss of one is to the benefit of the other. Or you can work to achieve a common goal and consider the victory of any player as a victory for all players. But some people are shifty weasels and will work against their friends no matter what… 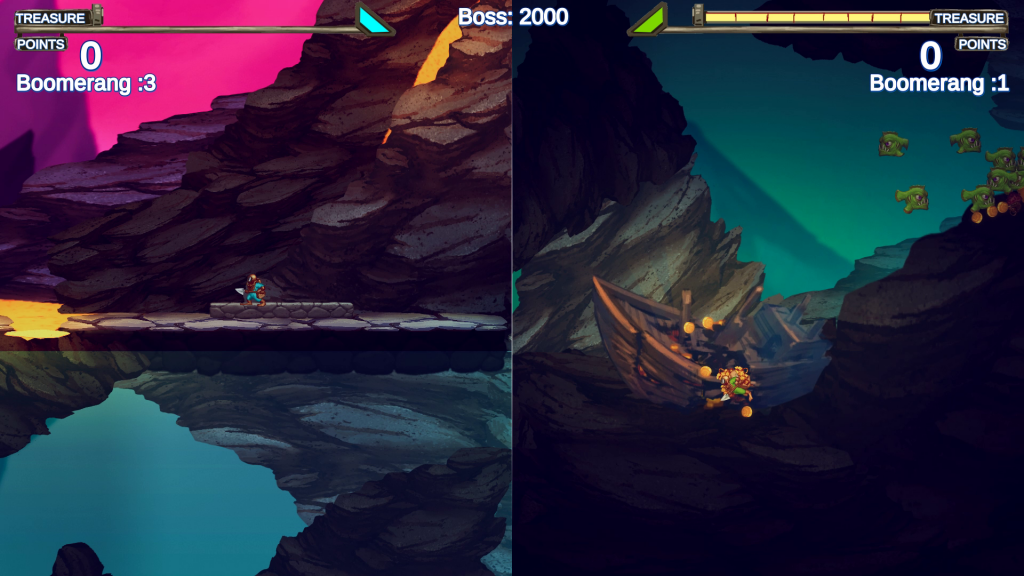 There is a surprising amount of variety. As the levels progress, the environment can change (desert, ice and so on) and new varieties of fish or traps start to appear. Likewise, new boss types with their own sets of attacks invade the depths, and a series of stages culminates in a proper boss fight in which the aim is to finally kill one of these gigantic beasts. While the big monsters usually cannot be killed during a normal stage, they can be stunned with regular attacks or with a wide range of weapons that the divers can equip, from javelins to bombs. And let’s not forget those useful shields that allow swimming past them while whistling merrily.

Each level has a slightly different pacing according to where the obstacles and shipwrecks are located, as well as the weapon dispensers which are often found above the surface. Overall the stages are well designed and feel sufficiently different from each other. My main order of business was to grab a few weapons, collect as much gold as I could carry, stun the big monster, go back to base. And then there are all the little things that make this perfect plan go sideways, such as interference from another player, the monster hanging around a bottleneck, or even… the weight of the gold. As gold accumulates in the bag on the diver’s back, the ability to jump is decreased. Some maps actually force players to throw some of their gold past a platform before being able to jump on it, which can have hilarious consequences if another diver was passing by and collects your gold. Don’t worry, you can have your revenge by picking their pockets right next to your chest and watch their face as their gold is added to your score. 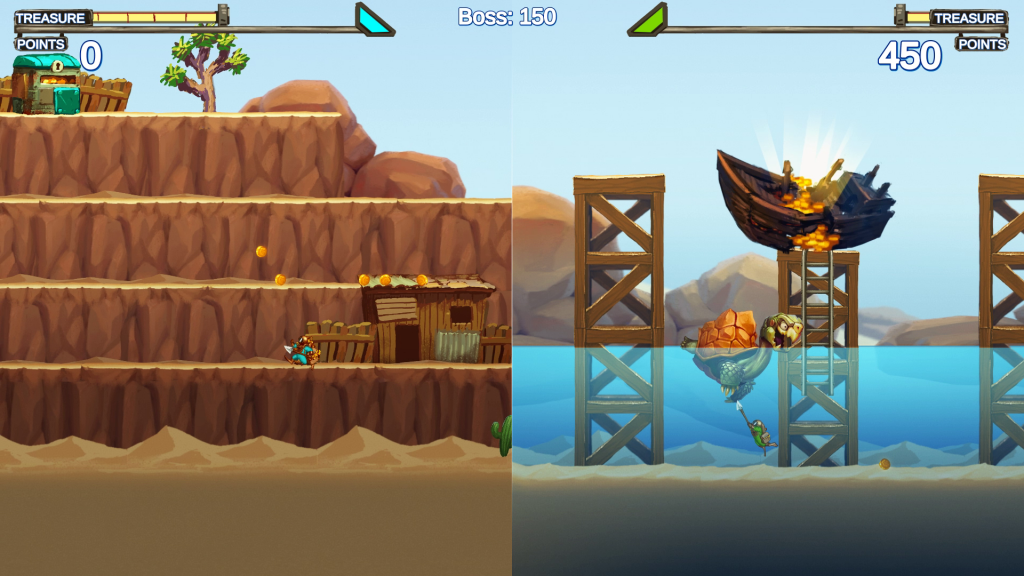 Besides the lack of online capabilities, the only downside I found to Aqua Lungers is that it can be a bit difficult for casual players to instantly understand the weapons system. From having to attack the skulls to using the right bumper to switch between acquired weapons, and let’s not forget the weight mechanic, this game is not readily accessible from the start. And yet, despite this slight complication, casual players had more fun and laughs in this game than many others from my toolset, and the possibility to cooperate was a relief for them. 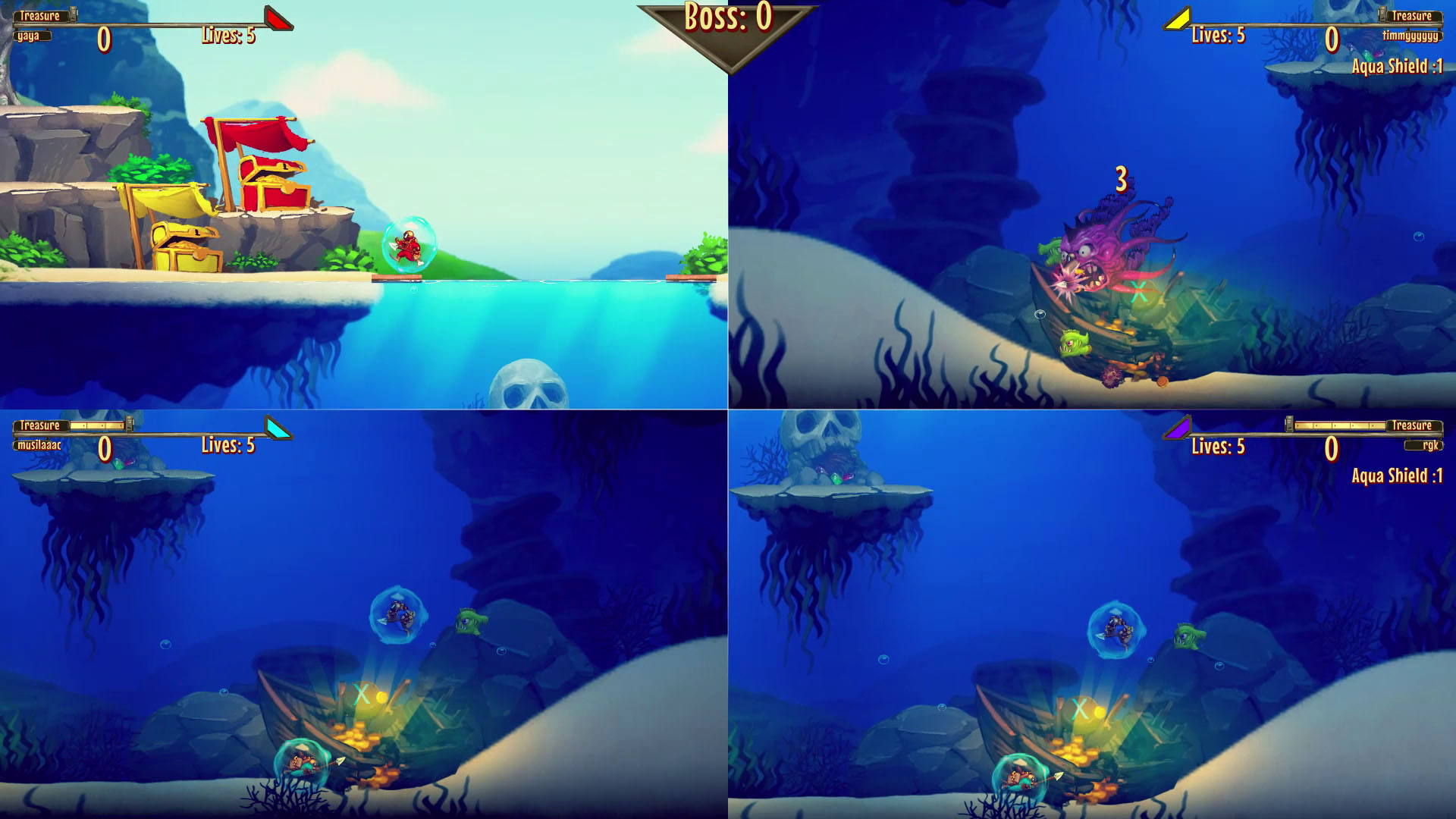 I also wish that it was possible to rebind controls, but the base controls work well enough. What is interesting to find in the options menu is the possibility to increase chromatic aberration to give a bleeding effect to the colors and simulate an old arcade machine! Overall the game runs very well, nothing to complain about. (Edit: fixed by the developper) . (Edit: much better now, the picture above this paragraph is from the release version while the others are from the early access) 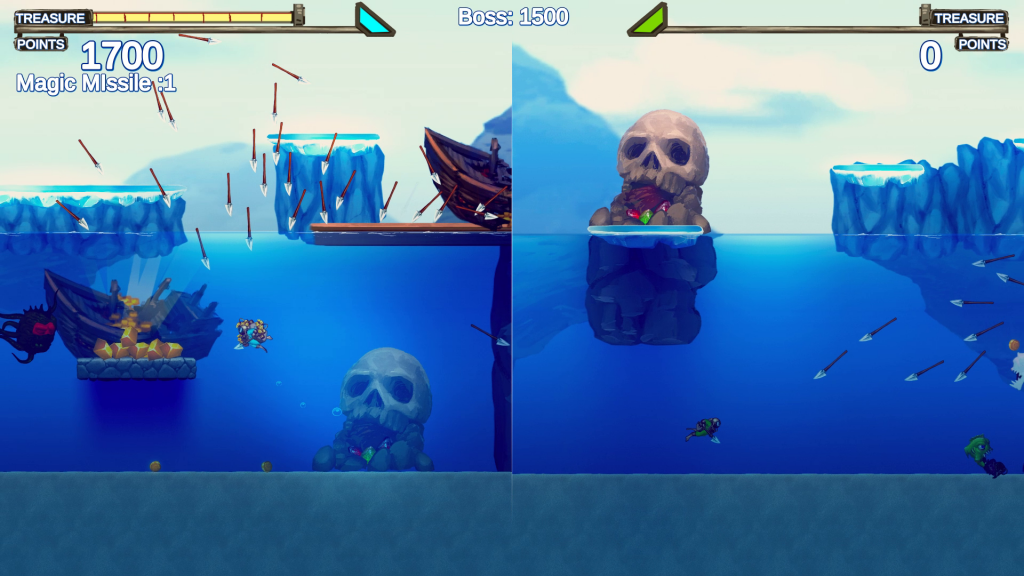 Let’s not beat around the bush any further: Aqua Lungers surprised me as a great and unique entry in the world of local multi-player games, and it’s both hilarious and challenging to play. It has great pacing, it offers depth and fun and it has level difficulties for all tastes. I absolutely loved the fine balance between competition and cooperation, as Aqua Lungers can be picked up to fight among each other for the first to score, or it can be repurposed to cooperate together in order to unlock all the stages… with all the varying degrees of backstabbing and pride that can get in between such a wishful plan. Definitely, a game to add to your party toolset!