Gladius delivers a competent 4X game with too little content for the asking price.

Gather around the fire for a story of designers and engines…

A long time ago in a strategy heaven far, far away – to be precise in the mid-1990s – legendary designer Brian Reynolds took over the reigns of the Civilization series at MicroProse from the hands of both the similarly famous Bruce Shelley (who used his Civilization experience to design the Age of Empires series at Ensemble Studios) and of course the eponymous Sid Meier (who was by then transitioning into his role as the Tom Clancy of strategy titles, lending his name as a cross-genre brand). After a phenomenal success with 1996’s Sid Meier’s Civilization II, he followed up with his design of the best-ever Civilization game: now at Firaxis, the previous title’s engine was improved for Sid Meier’s Alpha Centauri. Perhaps its greatest masterstroke was how it made both players and AI play according to their faction ideology. Even a decade or two later, it is still being copied, emulated and remade. The best such effort was 2013’s Pandora: First Contact, by the small Proxy Studios team. Available manpower tends to affect game scope and, as such, many Alpha Centauri staples are missing from Pandora, like advanced terraforming, wonders, the planet retaliating for eco-destruction, as well as the impressive cutscenes and voice-overs. On the other hand, they added a good amount of variety to the native life and features like tech tree randomization.

Reynolds went on to found Big Huge Games, whose 2003 debut game Rise of Nations did a better job of fusing Civilization gameplay with the real-time strategy genre than any Age of Empires.
Proxy Studios’ design and programming duo, Rok Breulj and Lorenz Ruhmann, didn’t have a move to RTS games on their schedule after their take on Alpha Centauri, but rather to the Warhammer 40000 IP. 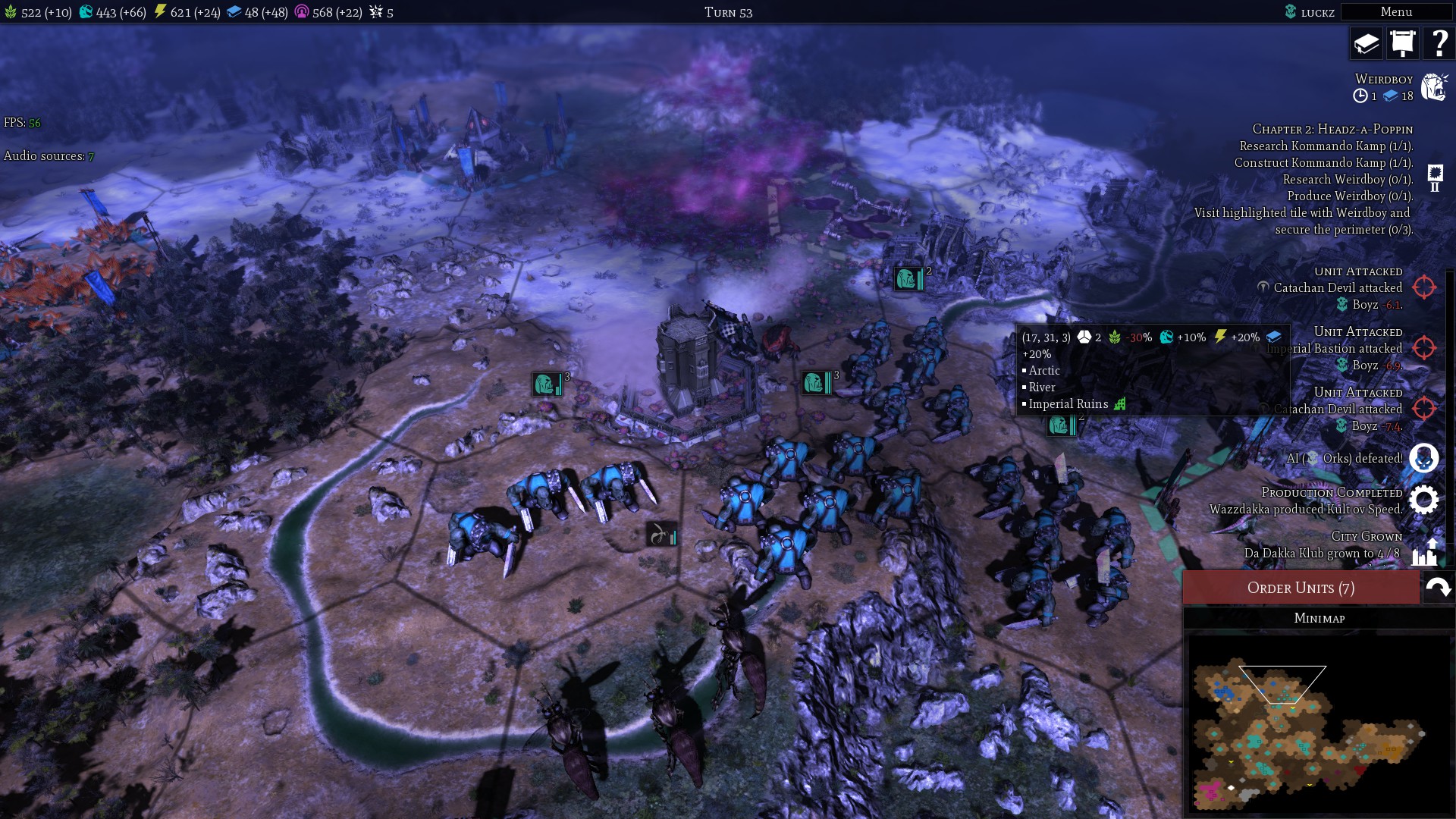 In Warhammer 40K, there are already a number of Gladiuses, from a Space Marine weapon patterned after the classic ancient Roman foot soldier sword to a starship class, and now the planet Gladius Prime is the setting of Gladius – Relics of War. The very simple story goes that an enormous spacecraft carrying Orks crash-lands on the planet and, as the invaders and locals fight, warp storms open above the colony and ravage the planet, destroying cities and civilization. This way, all factions conveniently have to rebuild, found new cities, and so on, making for the classic Civilization gameplay. The Orks want nothing more than to murder everyone else on the planet, and then to perhaps get back into space and through the warp storm to find yet more victims. The humans, split into Space Marines and Imperial Guard / Astra Militarum, are fighting in self-defence with their cities, their ships in orbit, and contact to the rest of the Imperium destroyed. Meanwhile, the warp storms and the fighting have woken up the ancient robotic Necrons buried in underground tombs millions of years ago, and they too emerge to join the fray. 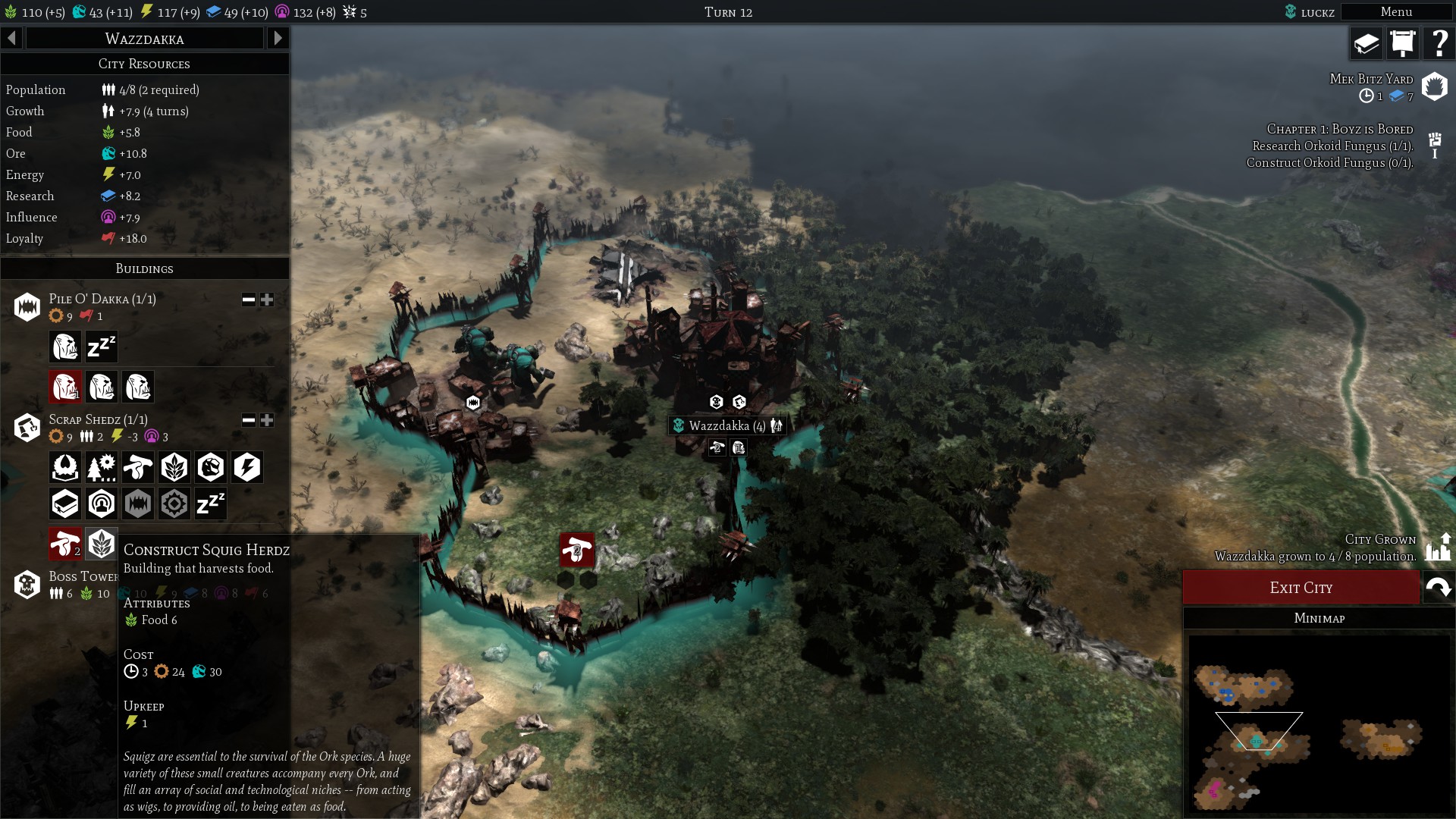 Each faction has gameplay differences, with Space Marines for example only building a single base for their chapter, with a simplified economy which combines food and ore into a single requisitions resource, and they deploy armed extraction towers around special resource locations on the map. The Astra Militarum relies on massed relatively weak guardsmen, whose morale easily breaks when nearby allies are defeated, leading to reduced combat accuracy. Necrons are limited to building on the sites of their ancient tombs, can teleport units between their cities, and expend resources to repair their troops on the battlefield or deploy new ones quicker. Finally Orks generate bonus resources from successful combat, are granted special healing in Ork fungus tiles, and do more damage when their side is successful and vice versa. 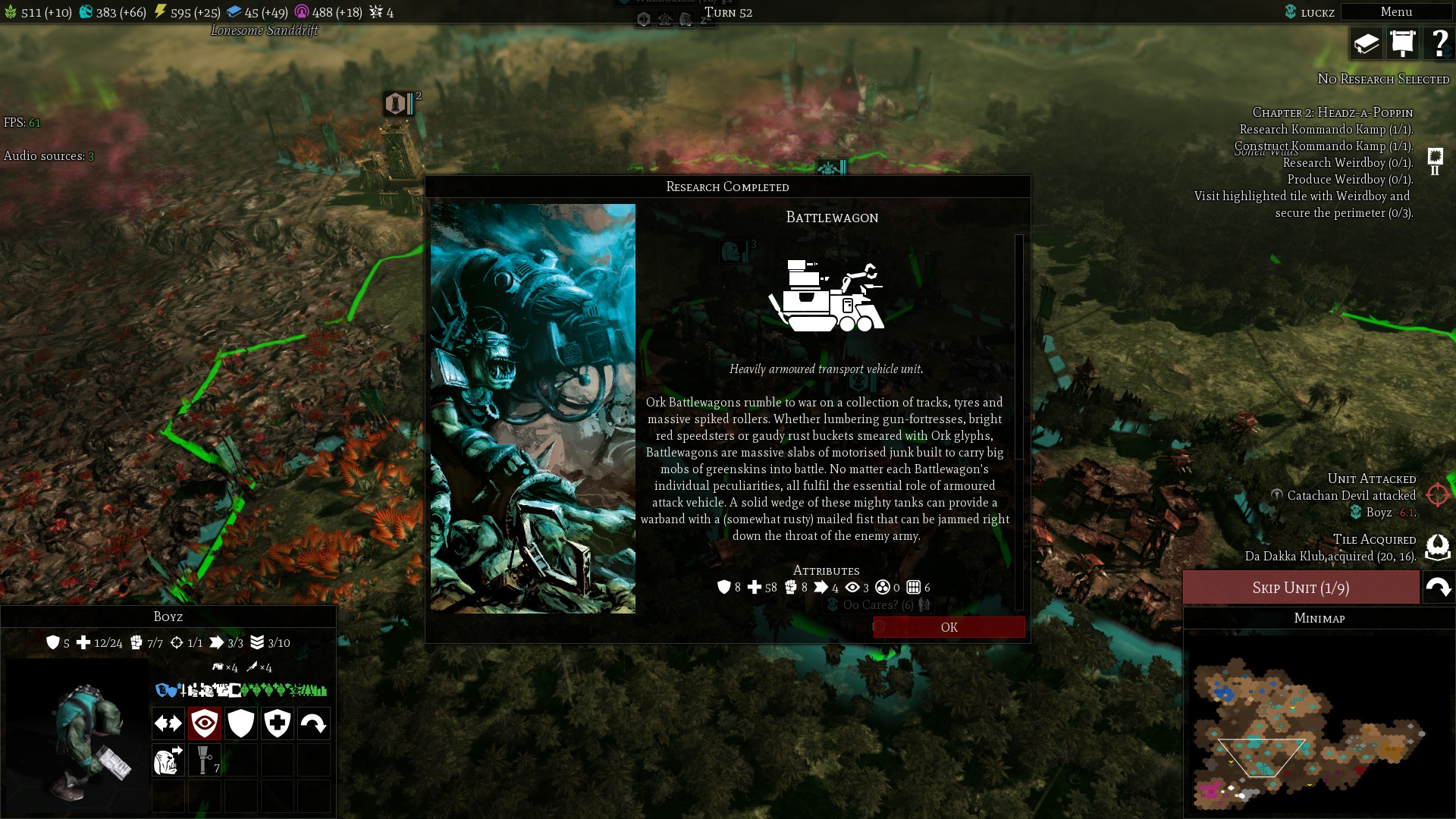 Due to the perpetual war theme of Warhammer 40,000, there is no interaction with your AI opponents or allies, like diplomacy or espionage. Similarly, enemy cities cannot be captured. Technology research serves to unlock iconic units for the various factions, as well as a multitude of bonuses to the units and buildings. As such, the four factions have distinct tech trees, but with no randomisation or similar, as one would find in Pandora. Speaking of differences to the previous game, Gladius first of all epouses the one unit per tile ideal of Civilization V, which does fit this setting, whereas Pandora had a unit inside a doom stack fighting an enemy to the death. The combatants here move once per turn, can each have various weapons with different ranges, and use this weaponry to attack one enemy per turn. Only if an enemy has not used their attack in the previous turn will they preemptively attack once you enter their range. Most units have some sort of special attack or ability, usually with multi-turn cooldowns. Each faction has hero units available that typically cast powerful spells on enemies or buff friendlies, which can be improved as your hero gains levels. For example, a high-level Ork Weirdboy hero can teleport an entire army to any place not covered by the fog of war. 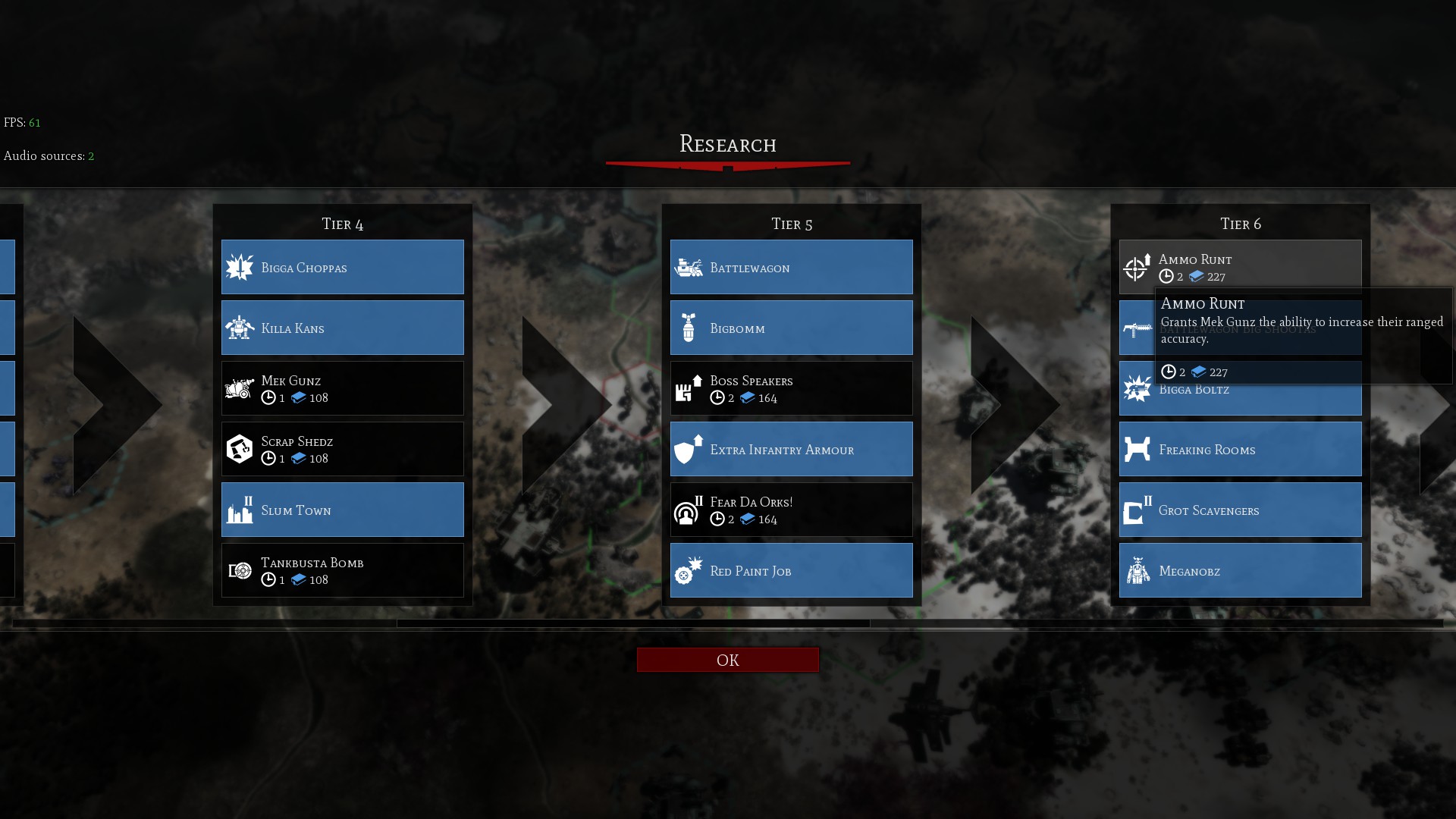 As mentioned at the start, Gladius’ biggest problem is its lack of content, undoubtedly due to budgetary constraints. The game’s $45-ish price is much higher than the $30 Pandora launched at, yet the previous title’s price is much more suited to what you get for your money. Heroes can be equipped with special passive and active items as well as consumables, but these are the same for all. More importantly, the four factions have no visual customisability, yet 40K fans are used to having features in their strategy games like an army painter where each unit’s 3D model can be customised to match a certain Space Marine chapter, Imperial Guard regiment, Ork warband, or Necron dynasty. All you get however are 16 generic strategy game colours, which could easily have been replaced with presets matching popular lore armies at the very least. Having a more customisable palette system would also allow for fan service like the Ork Red Paint Job upgrade (“Da Red Wunz go Fasta!”) to have a visual effect. 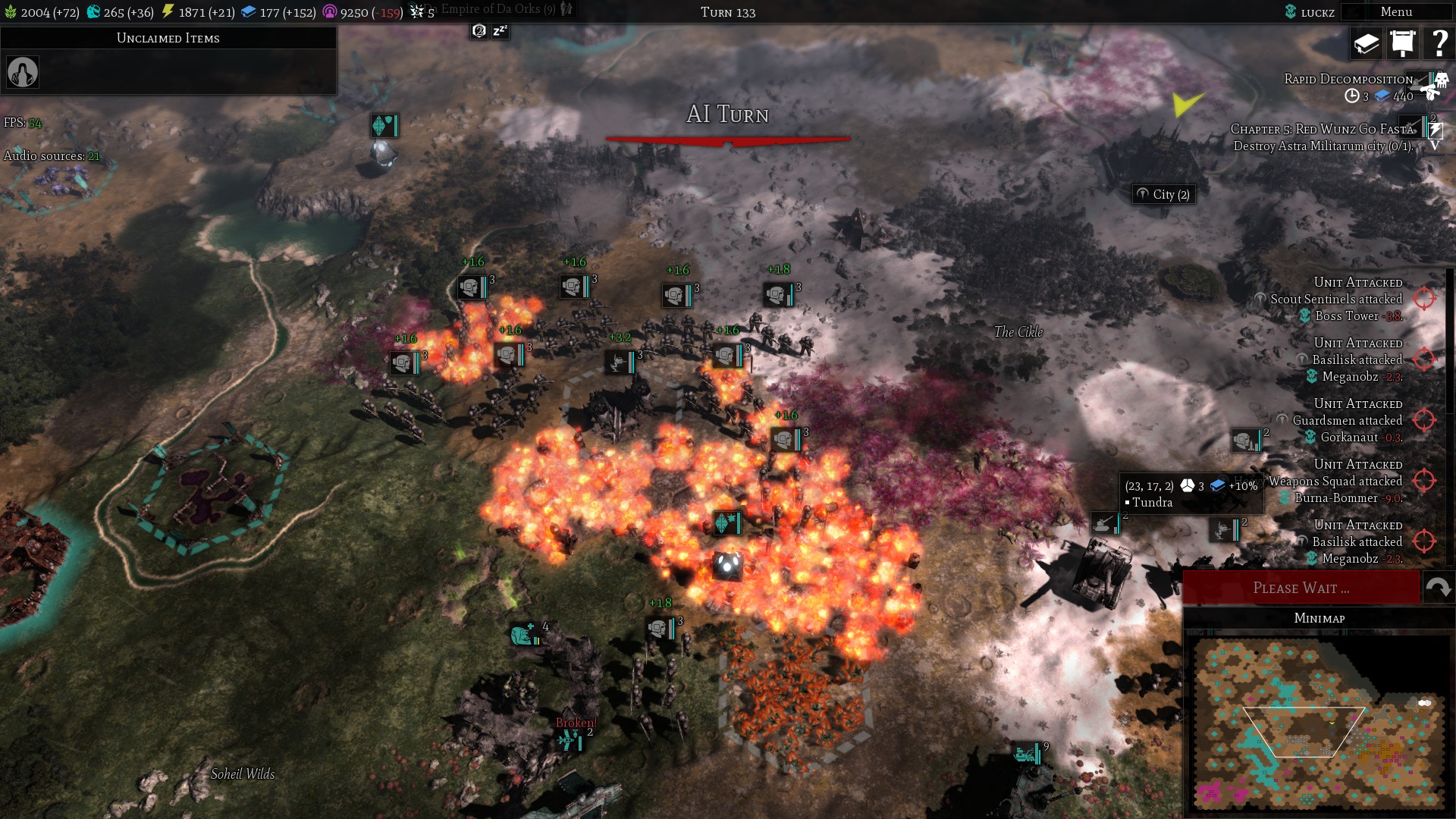 The low production budget also means a lack of voice acting for the units, only a few tracks of background music, as well as only one faction-specific quest chain to tell the little story the game has and serve as an alternative victory condition to destroying all opponents. As the asking price gets this close to $50 territory, one would expect something like two more factions, many more and perhaps dynamic quests, and nicer colour presets.

While additional factions are planned, with the Tau in particular being hinted at, these will very likely be paid DLC rather than free updates. 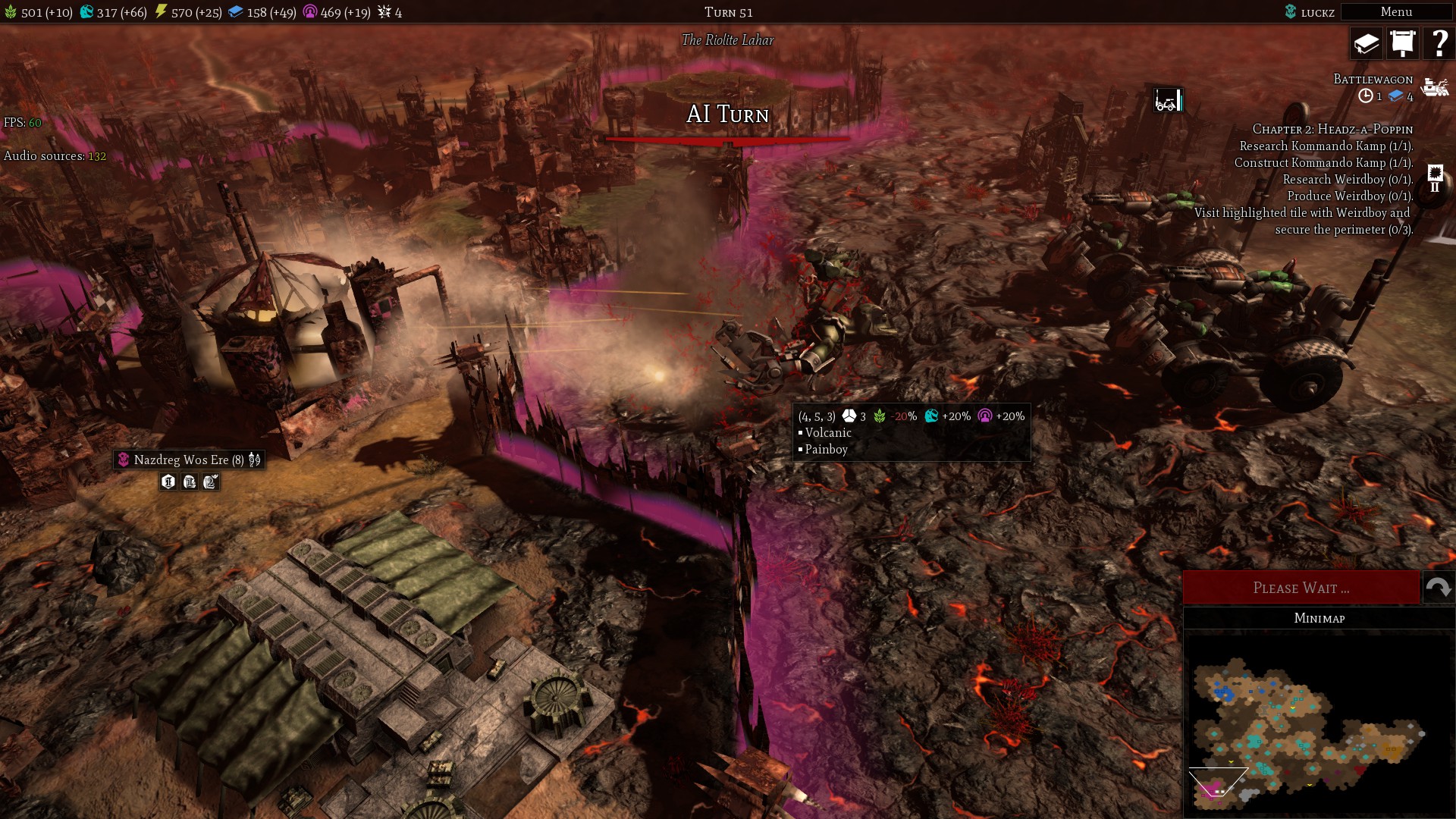 The game’s Steam version uses Steamworks features to easily invite friends into a multiplayer game which, by the way, has simultaneous turns for the human players. Up to 16 player slots can be filled with humans or AI, preset teams optional, and (common to the genre) there are a number of ways to adjust the generated map in terms of size, land percentage and special terrain features. Each player slot has a separately adjustable difficulty setting, and there’s an overall game speed setting that determines how swiftly you reach the end game.

The game launches without Steam Achievements, but the developers have hinted at including those in a future patch, as they did with Pandora. Steam Cloud is used to synchronise savegames. The developers themselves use Linux, so it’s no wonder that platform is supported. As a gimmick for players using headphones, the game comes with a very nice head related transfer function option to add directional sound to the units on the map.

Proxy Studios’ OpenGL-powered in-house engine is very moddable, with open media file formats and easily-editable XML files, so perhaps there will soon be fan-made creations to give the Space Marines individual chapter factions with their own bonuses, or to remove the unit and hero maximum level for more over-the-top WH40K combat. Their last game didn’t use the Steam Workshop, and so far there is no indication of Gladius changing this, considering it’s also sold in a non-Steam version. 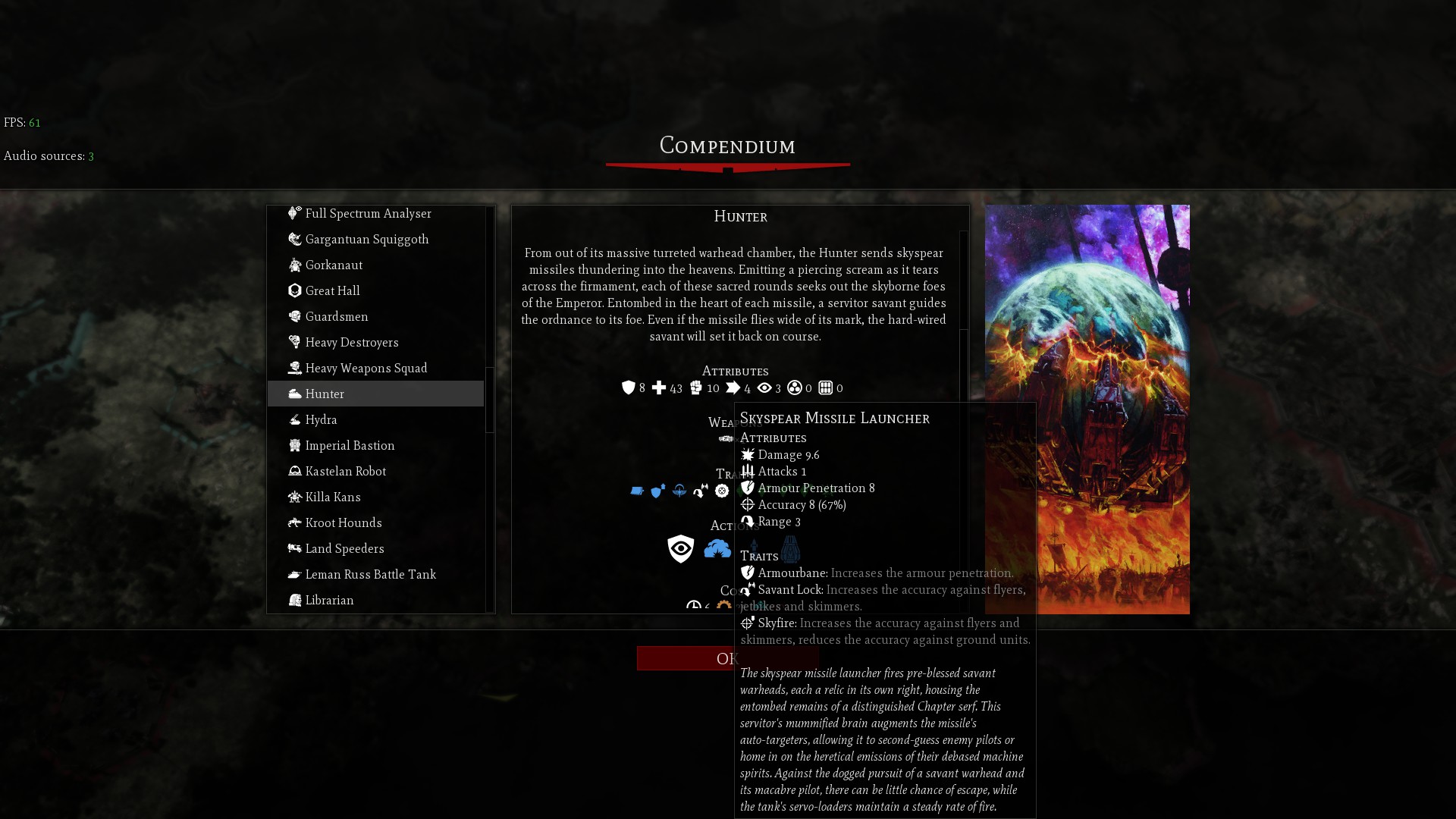 Any Civilization V fan can easily pick up Warhammer 40,000: Gladius – Relics of War, but price-wise you pay a big Warhammer tax for your one more turn fix that just isn’t backed up by variety. Civilization veterans might be put off by the lack of diplomatic interaction or the obvious focus on warfare. Warhammer 40K fans will demand more authentic army colours, but be pleased by the faithfully implemented units and the ~100 different weapons spread among them. Multiplayer, modding and the promise of DLC and patches sure give Gladius a bright-looking future. 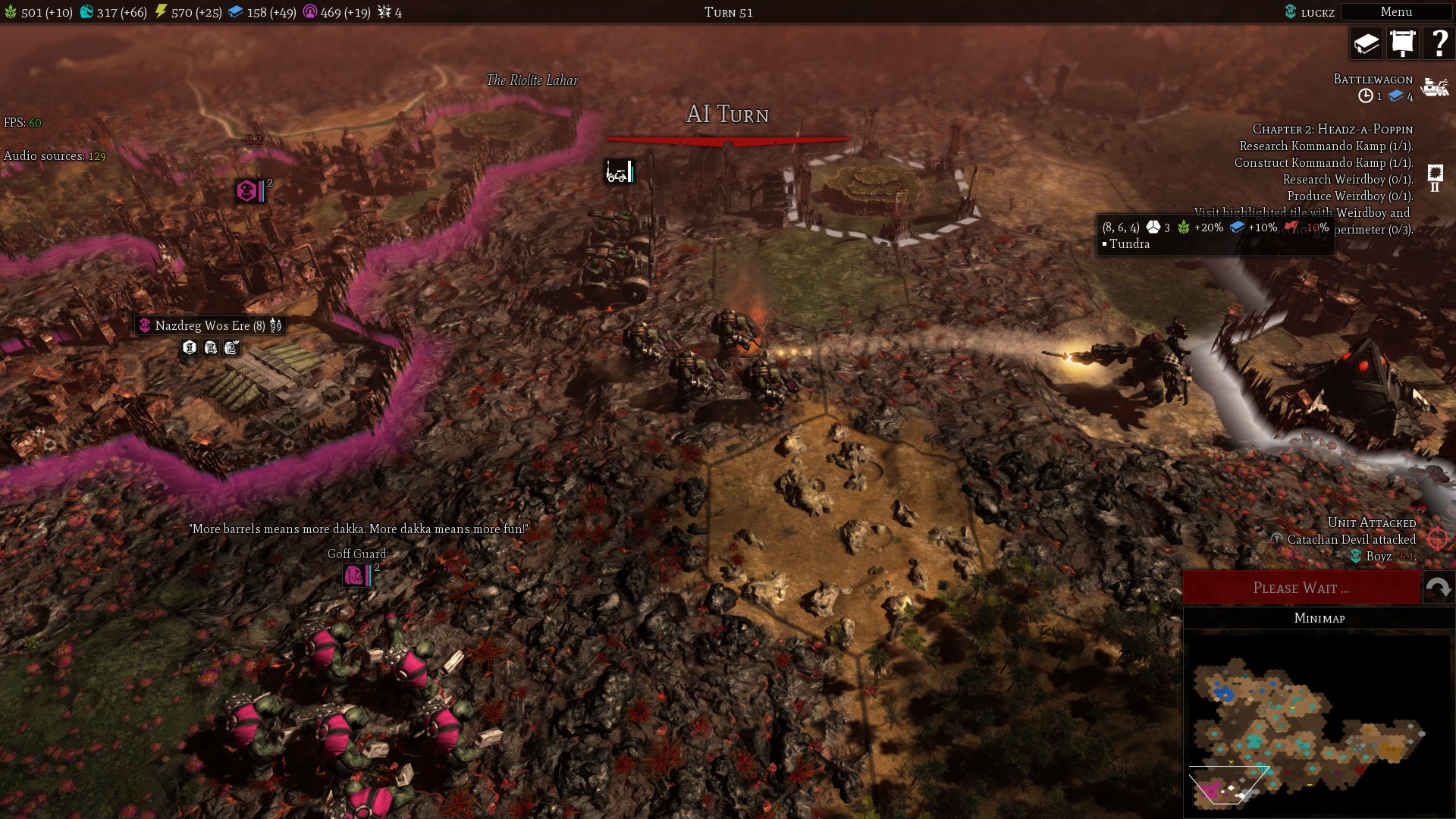