Revulsion is the result of a mash-up between old-school FPS level and shooting, with the progression system of a loot-based game, as well as some elements of Dark Souls. Now, the question is, how does this stand up on its own?

I consider myself to be a hardcore fan of the FPS genre, even though I’m not the best at these types of games, so when I first saw Revulsion on Steam, it quickly grabbed my attention. “Revulsion is the missing link between old school classic first-person shooters and modern day first person shooters”, at least that’s what the Steam store page claims. I must admit that, during my first couple of hours, this statement did seem to make sense to me, but the more time I spent with the game, the more it quickly became apparent that, unfortunately, Revulsion is not exactly what it claims to be. 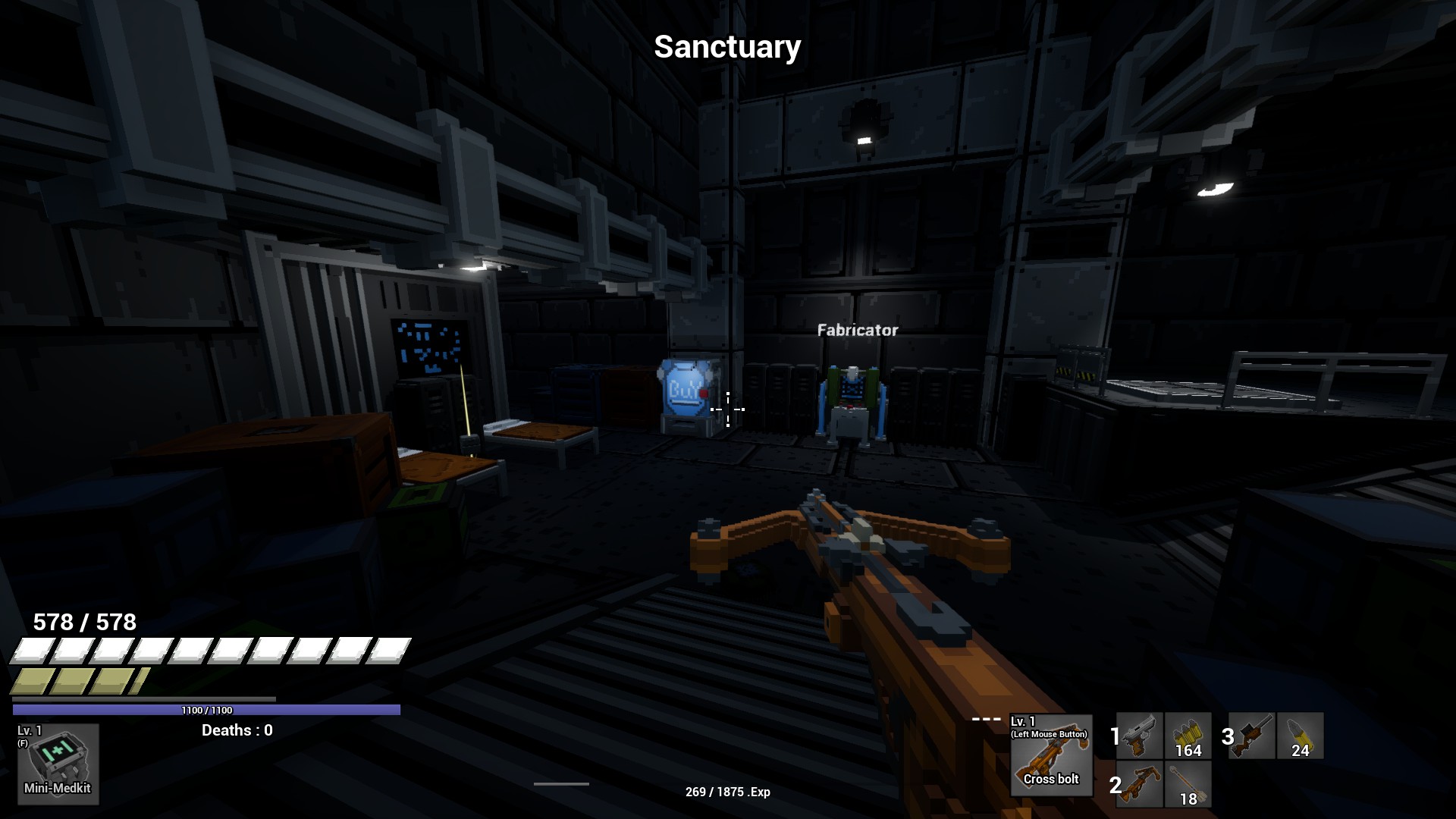 Revulsion starts off with a rather quick introduction, just enough for the player to get their bearings, and right after that, you’re thrown into the core gameplay loop, which starts at the Sanctuary. The Sanctuary is your safe-house, where you’ll be able to fast travel to during and after missions, not only in order to save your progress, but also to sell loot, and repair and upgrade your equipment. It’s essentially a hub area, where you can also select which mission you want to undertake next.

The game is divided into several missions, and you’ll unlock new ones as you complete the old ones. In turn, each mission is comprised of several interconnected levels, but some specific missions, called Trials, only feature a single harder level. When you beat these missions, you’ll gain specific rewards, like blueprints for a weapon or crafting materials. Still, even after completing each mission, you can still go back and replay it as many times as you want. This directly correlates to the game’s progression system, which is very similar to loot-based games like Diablo and Destiny. 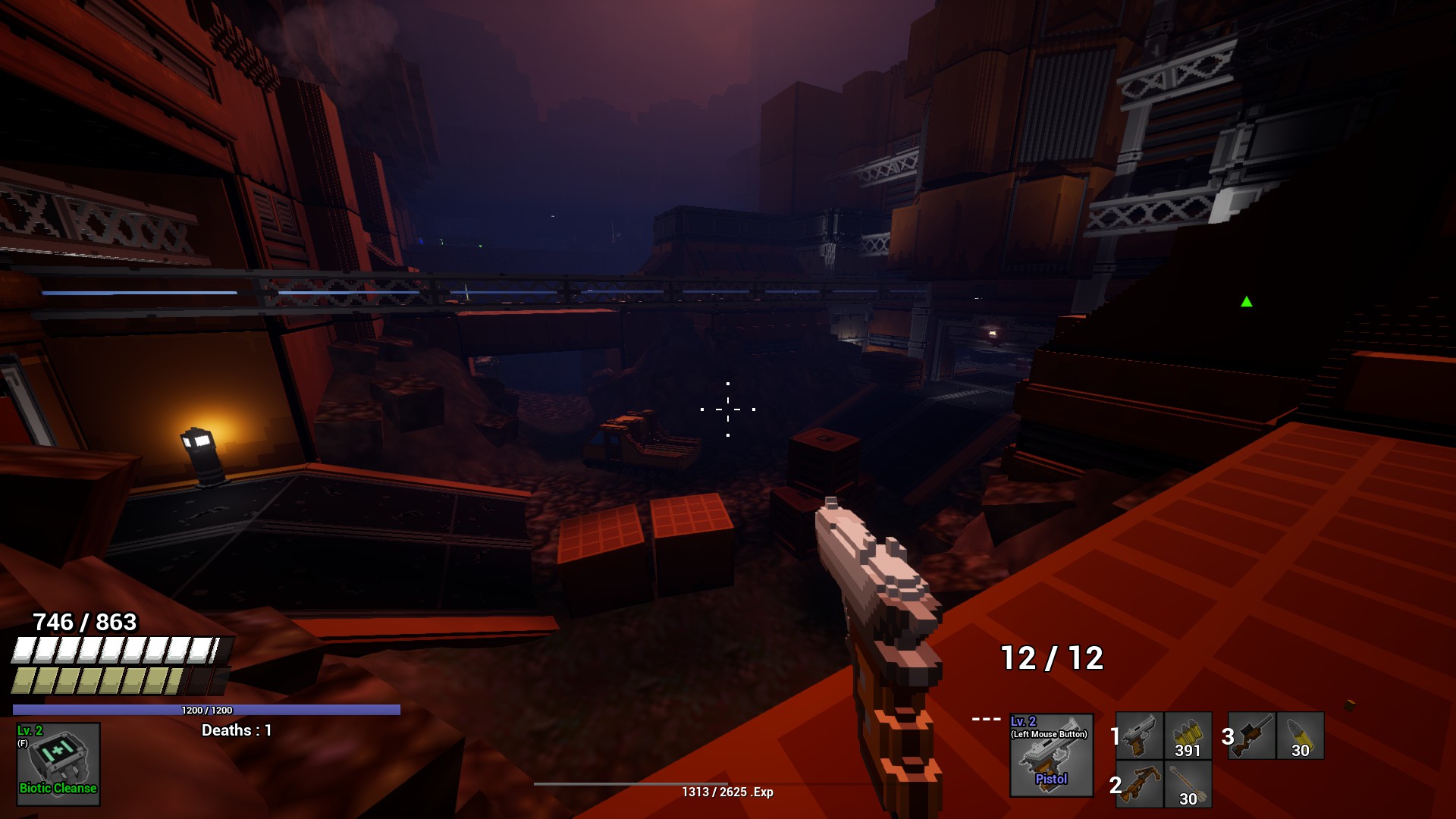 Now, the game certainly looks and plays like an old-school shooter, like it claims to be, and the level design is certainly heavily inspired by older titles in the genre, but that’s where I think that the Revulsion experience starts to falter. At first, I was really glad to know that the levels are handcrafted and not procedurally generated, which in theory would allow for a more consolidated experience, but the truth is that you’ll find yourself playing the same level multiple times in different missions. Personally, this alone wouldn’t really bother me, but I find the game to have other issues that also hinder the overall enjoyment that someone can have with the game, and I’ll point these out soon.

As far as weapons go, Revulsion is actually pretty compelling, as the arsenal at your disposal is rather enjoyable, and, most often than not, it creates some interesting gameplay opportunities that come aligned with the level design. Still, I’m not a fan of a loot-based system in a first-person shooter, with weapons just having different stats for the sake of variety. The game allows you to carry up to seven different weapons at any given time, but you’re only allowed to carry one weapon of each specific type. There are pistols, melee weapons, shotguns, rifles, heavy weapons, and grenade launchers, but inside each of these categories, there are multiple different weapons. For instance, there are standard issue pistols and rifles, but there are also energy based ones. 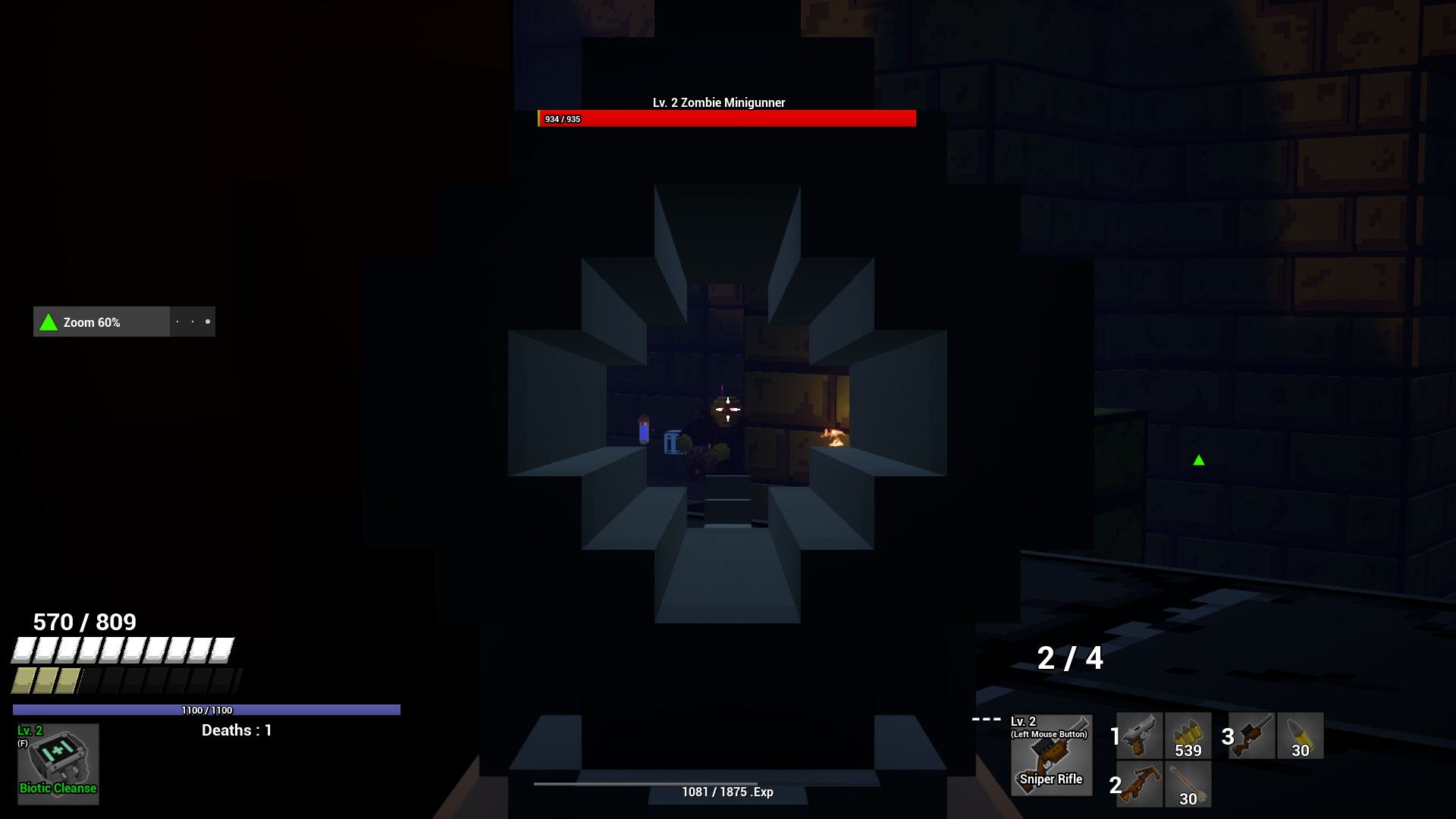 Generally speaking, the weapons feel nice, either by having a decent kick whenever you fire them or thanks to visual or audio feedback. Nonetheless, I’m disappointed that the emphasis when using weapons is placed on spread rather than recoil. The crossbow and the sniper rifle feel extremely satisfying to use, especially when you hit an enemy. This happens not only because they deal a lot of damage, even more so if it’s a headshot, but also because the weapon’s sounds and animation are perfectly in tune with the shooting motion. It’s worth noting that different weapon types can actually use the same type of ammunition, and ammunition itself can be somewhat scarce on some of the levels, so you can’t exactly spray and pray, you have to make your shots count.

Revulsion certainly does take inspiration from Dark Souls’ design, and this is not limited to the Sanctuary. There are loot chests that you can find, and they can contain crafting materials, blueprints, weapons, or even helmets, body armor, and what not. This is where the farming element of the game comes in, as you can repeat missions to get farm materials or see if you get a lucky drop that will make your life easier on your next mission. 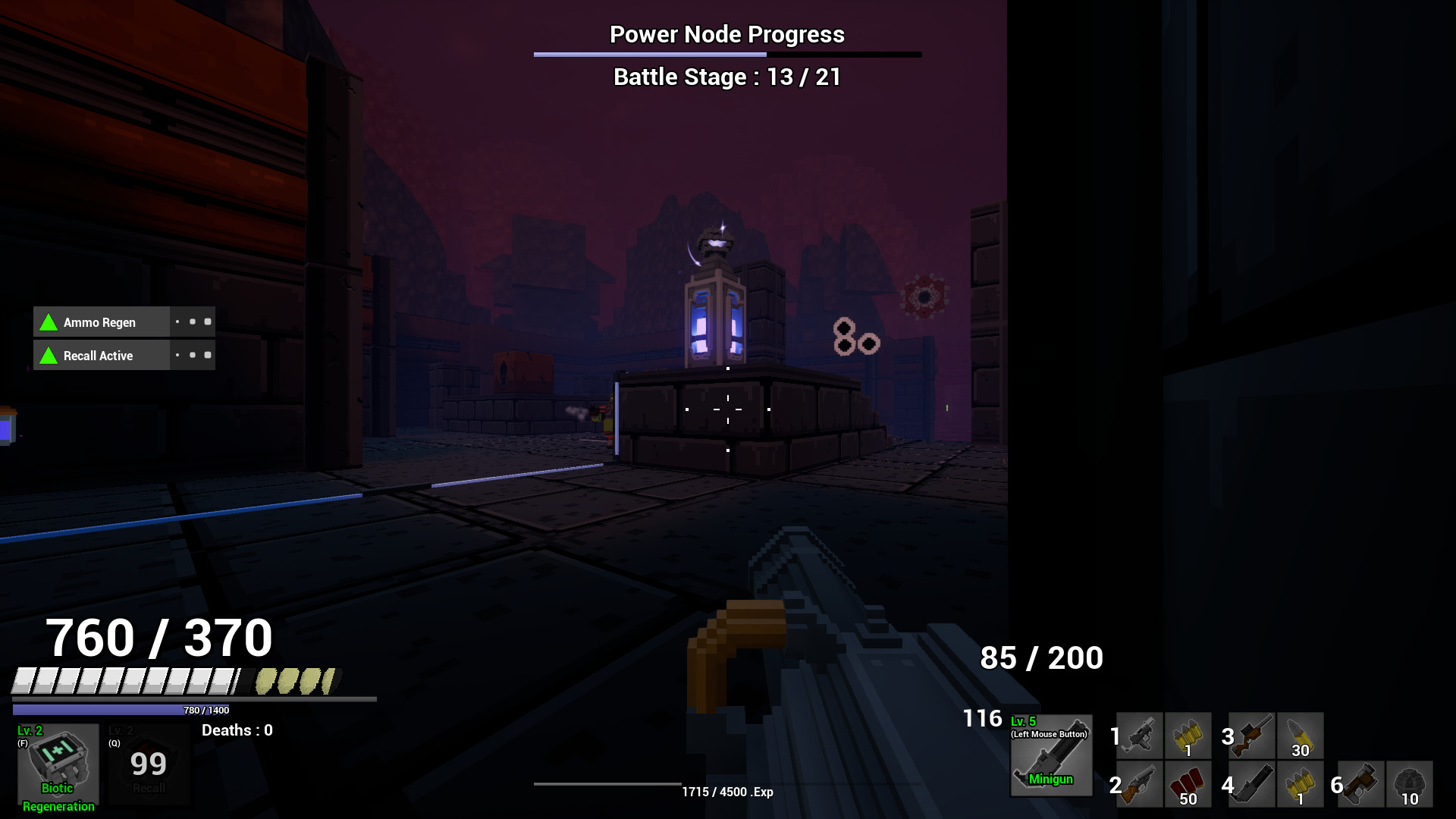 With that said, the farming element also comes along with the fact that enemies have levels, just like yourself. Personally, I’m not a fan of first-person shooters where enemies have levels, because their health and how hard they hit depends on that factor. I find it extremely annoying that on one mission I am able to deal with a certain type of enemy without breaking a sweat, and, on another mission, the same enemy type is way harder to deal with. This type of elements can really ruin FPS for me, but I guess there are people out there that can enjoy it.

So, previously I mentioned that the game’s level design was inspired by classic FPS games, but I also said that this hindered the experience, and that’s because you might find yourself replaying the same level layouts just because you have to grind. Some people will be fine with this, but personally, I’m not a fan. It’s a shame really, because the levels really remind me of games like Quake and Doom, in the sense that you’ll find yourself searching for switches, or these power crystals, so that you can unlock doors in order to proceed, but playing them over and over quickly becomes a chore for me. Although, the in-game map is one of my favorite features in Revulsion. By simply pressing the “M” key, you’ll project a holographic 3D representation of the current level in front of you, and you can rotate it in any way you want to, much like in 2016’s DOOM. 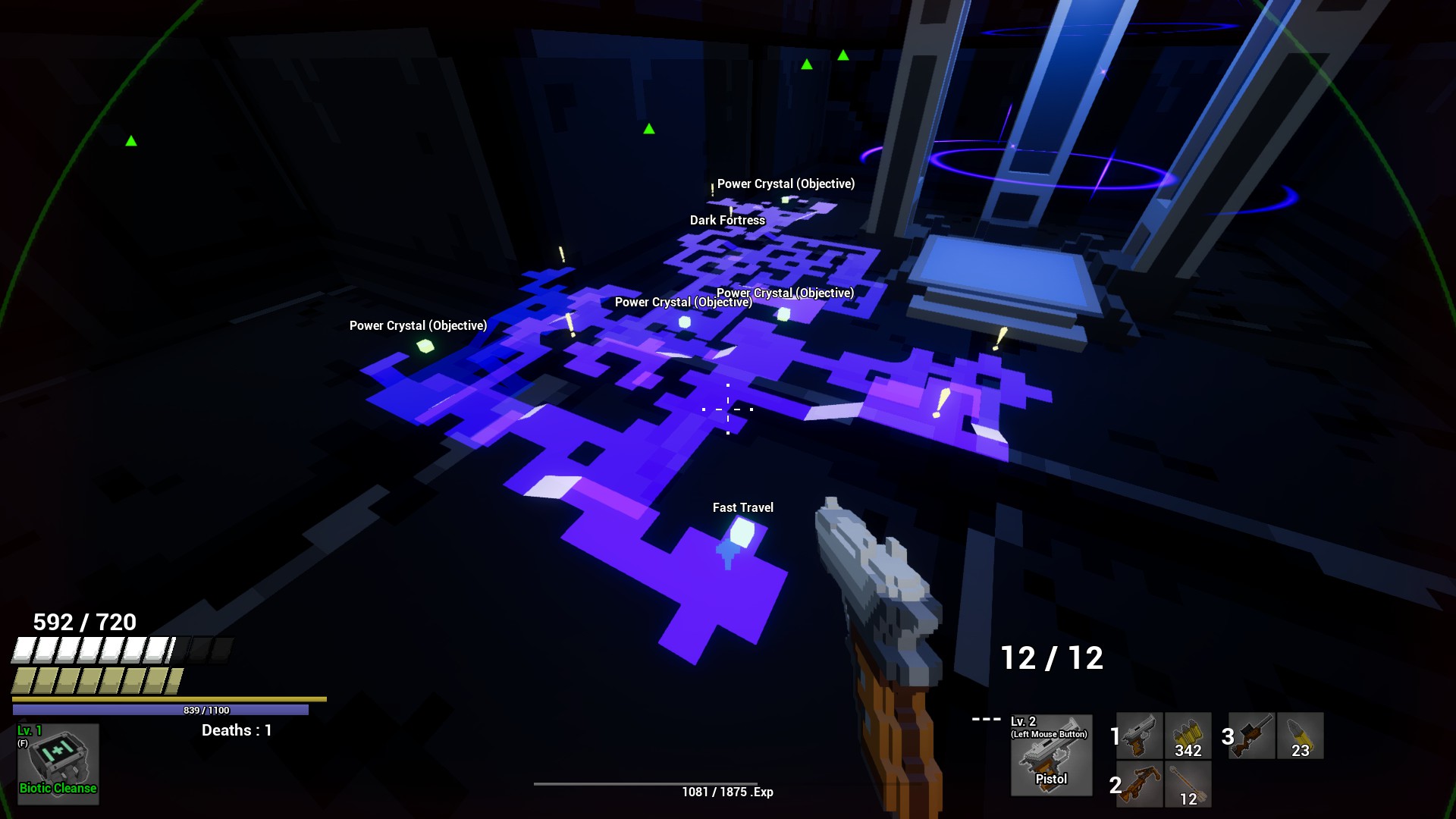 Much like the weapons that are available to you in this game, the enemy variety is also surprisingly diversified. You’ll mostly find yourself fighting a mixture of demons and zombies, so you can’t go wrong with your standard zombie chasing you at all times, as well as huge zombies that carry mini-guns, grenade launchers, and demons that strike from afar and look remarkably similar to Doom’s imps. Notwithstanding, I find that one of the game’s biggest downfalls is the enemy AI. Depending on the enemy type, enemies will either just run towards you in a straight line, which makes it easy to quickly dispatch them, or they’ll slowly approach you until they have an angle to take a shot. This last group of enemies might sound somewhat challenging at first, but once you learn how to properly peek around corners and take advantage of cover in order to slowly drain the bulkier enemy’s health, the game actually is not that hard at all, unless, of course, they’re high level and pretty much become bullet sponges.

In theory, the concept of Revulsion sounds really compelling, but in practice, I found it to quickly become rather tedious and a chore to play, mostly because of its inspiration on “modern” shooters and Dark Souls. With that said, I do strongly believe that the game would have been right up my alley if it were more focused on being a classic old-school FPS. Still, I’m sure that Revulsion will please some FPS fans that might be interested in a mixture of the old school shooter formula, with gameplay mechanics and the progression system of some modern games. Personally, I think I’ve played enough to realize that this is not my type of game, but, judging from Steam’s reviews, it appears that I’m in the minority, so if you have the slightest interest in Revulsion, I’d encourage you to give it a shot.