Funnily enough, right before I heard about Cultist Simulator, I was playing a mobile game called Underhand. While these games are in the same vein, Underhand is more intense on resource management with the end game involving the summoning of gods. I did eventually stop playing it, but it got me interested in Cultist Simulator more than I would have been if I had not played it. Now that it has been released, it’s time to see if the game was worth the wait and build up my very own cult.

In Cultist Simulator, your whole life is shown on a table and represented by cards. With barely anything to put your name to, you search to find out how to make your life more meaningful. Luckily, this quickly comes to you and your life ambition turns towards managing a cult. Hopefully, you won’t get caught or die before you’re able to. 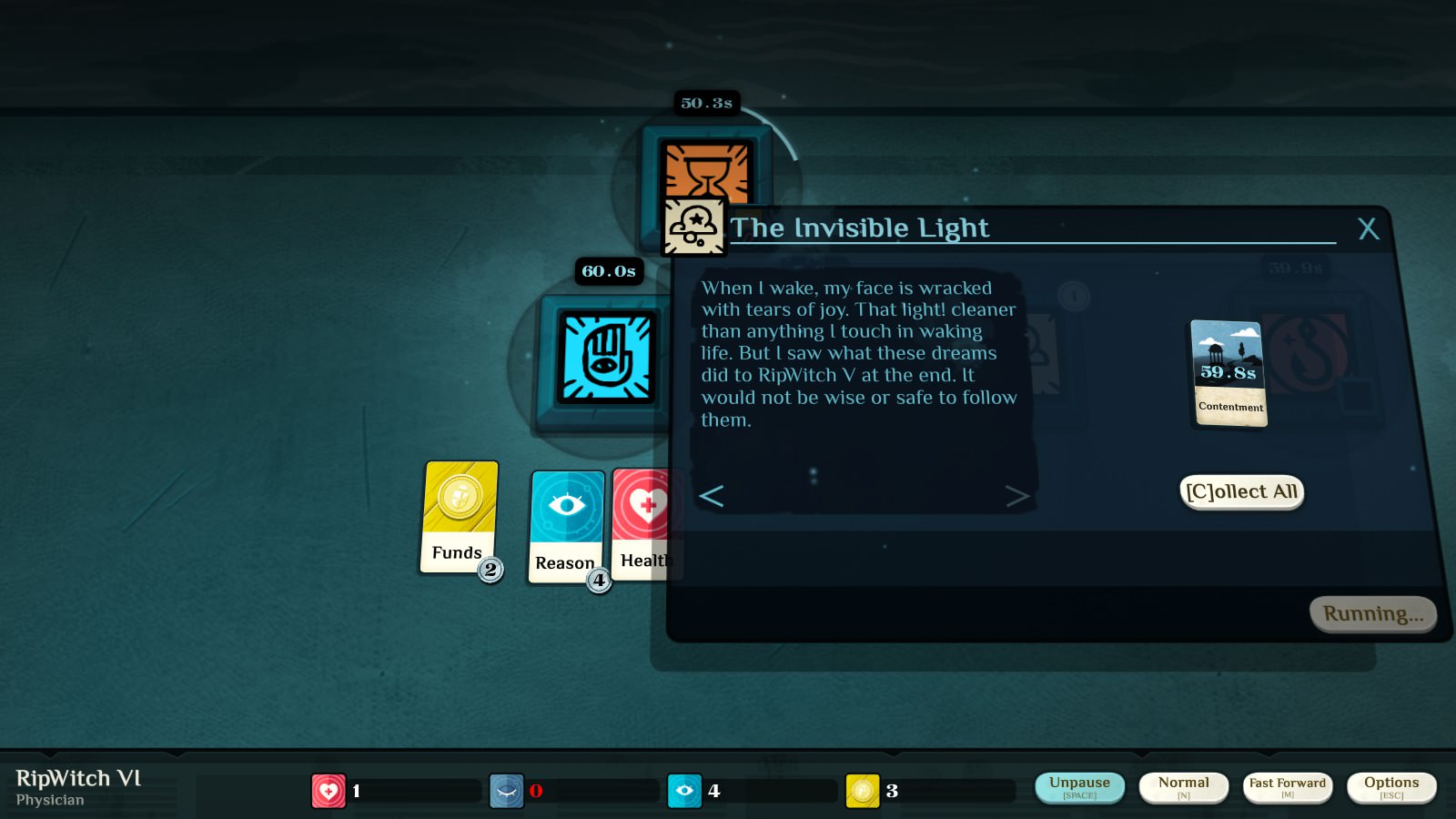 Everything you handle revolves around dealing with cards that can be used in the various tiles, or verbs, but first, you start out only with the Work verb along with a job. By dropping your job card inside it and starting it, it will begin a countdown that will give you funds at the end of it. Shortly after, another verb called Time Passes will appear and it will grab a fund every time the countdown resets. This will also have the possibility to give a seasonal event verb. Just a heads up, you can preview what will happen in the next season by clicking it. Soon after, you’ll be introduced to the other verbs: Study, Explore, Dream, and Talk, whose actions are based on their name. If you find a book, drop it in Study to read it. 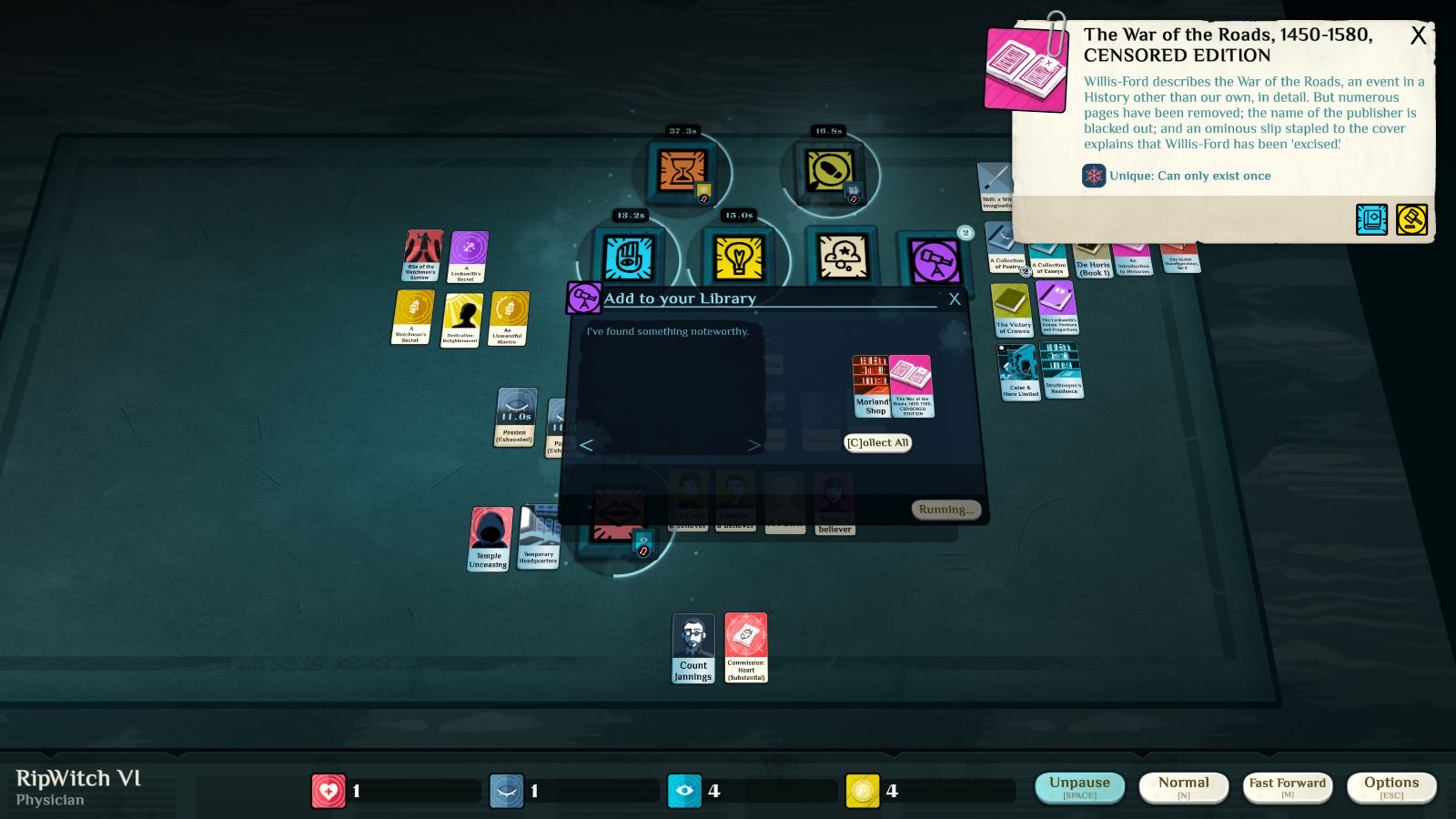 What would verbs be without cards though? The main resource cards you will deal with are your Health, Reason, Passion, and Funds. As you progress, you will also get more cards such as locations that you can visit or send followers in an expedition, acquaintances or commissioners, and books which will give lore once studied. However, each action also gives you a chance to get cards that can cause a game-over if not negated, such as Dread. For this reason, keeping an eye on your table is paramount. Make sure you know what’s coming up next, how many resources you have left, if you need more funds, also keep an eye on the countdowns that are ticking down, and what verbs that come from Time Passes are doing and taking. If you manage these aspects, you can focus on your cult. 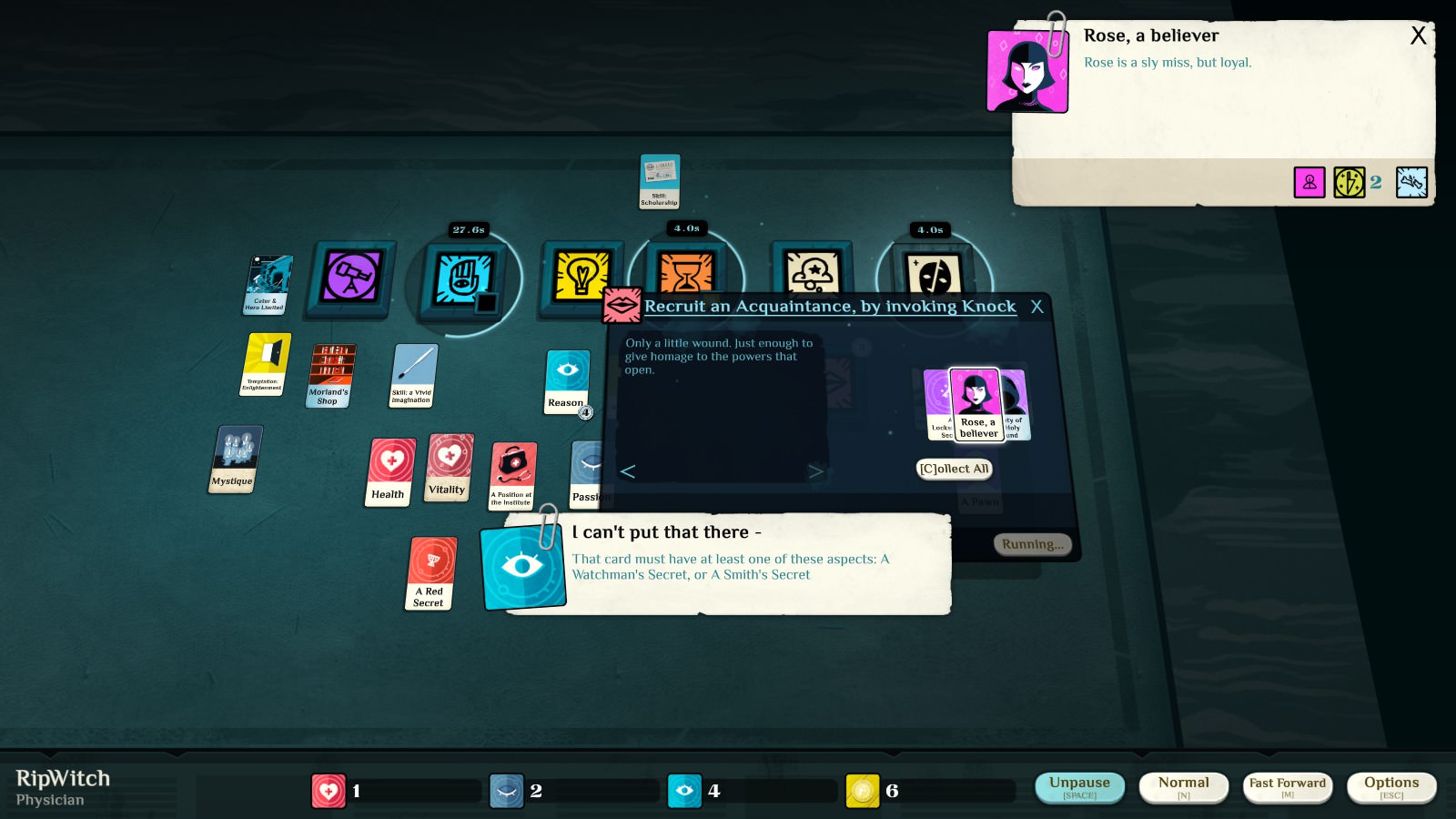 Once you get your cult started with your chosen lore, you can then convince acquaintances to become followers. Each follower has their own aspects that have different uses (such as edge being related to killing), and if you have enough lore that is related to your cult, you can upgrade them. However, keep in mind that you can’t throw them around recklessly. Once they are gone, you can’t get them back, and no other card will come to replace them. Followers are limited, and if you run out of them because they died on expeditions or because they never returned when trying to do a job, tough luck, you are short of whatever aspect they had. Luckily enough, you can go out and grab hirelings, which can be replenished, if you don’t want to risk it. 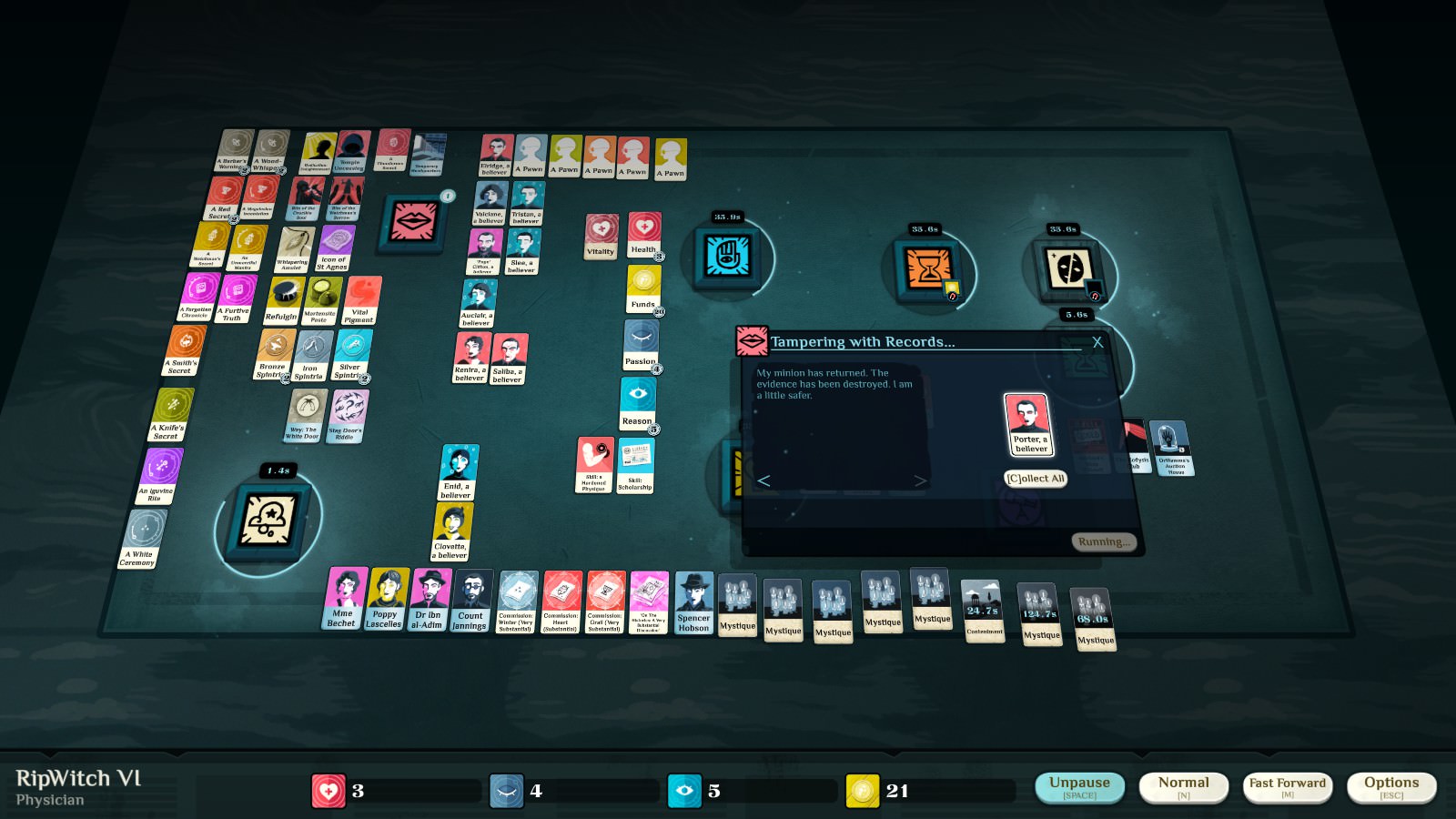 Even though establishing a cult and talking about lore will bring in people interested in joining, it will also bring in investigators trying to jail you. Investigators will look for evidence and will grab Mystique and Norietary when the season comes around. They can, and will, create evidence against you, and if nothing is done to get rid of it, or the investigator, you can go to prison. 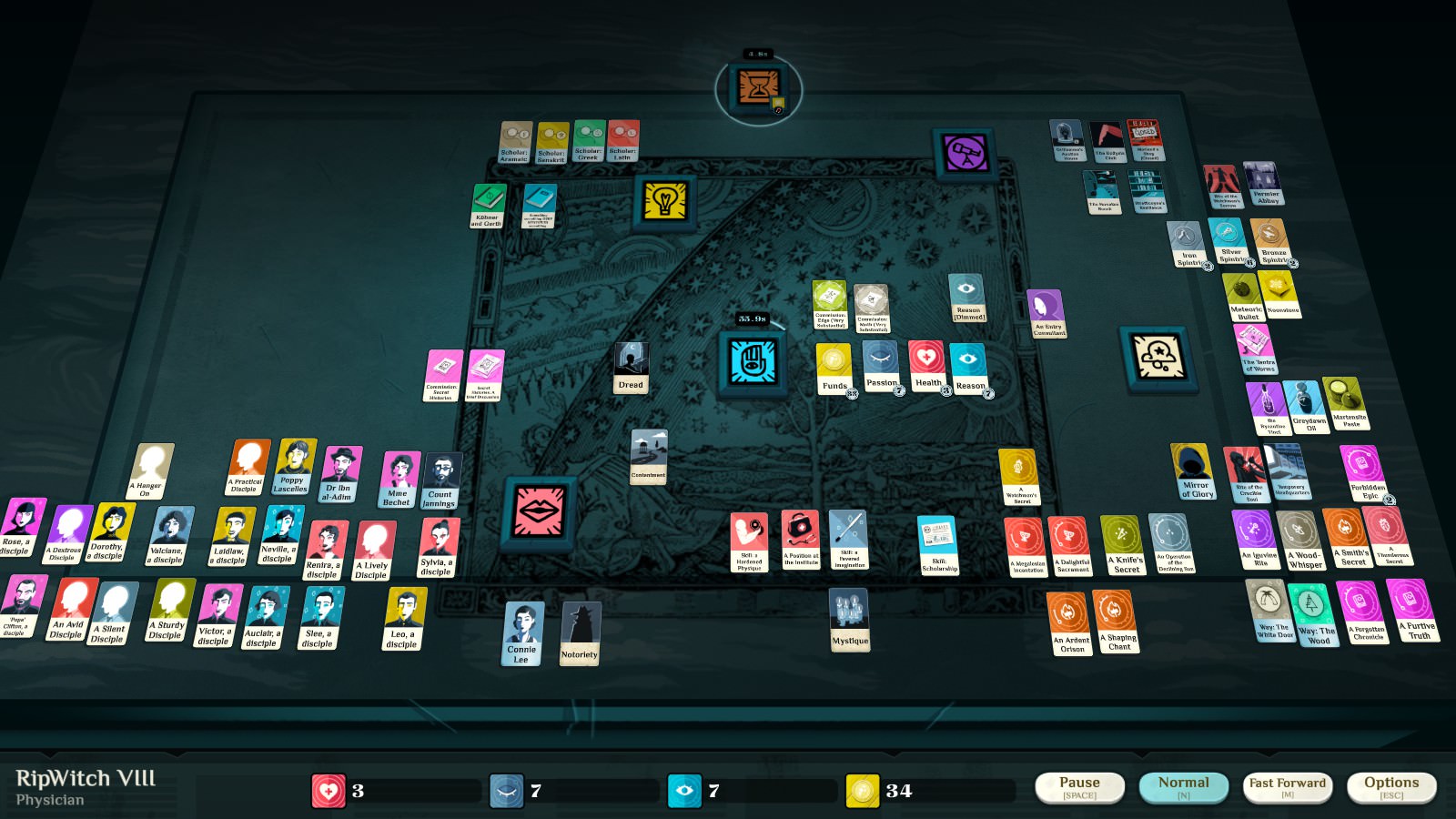 As you may find out once you start playing, there is no tutorial. This is not necessarily a bad thing, though it may initially seem like so, as the game does help you to an extent. With every card that you pick up, the verbs can possibly be used in light up. Similarly, inside the verbs, if you click on the empty tile it will highlight what can go in it if you don’t know what aspects a card must have in order to qualify. There are also some hints within card descriptions that will tell you what you can do with it, as well as within the verbs, which will sometimes give you a heads up.

This is mostly the part where Cultist Simulator focuses on trial and error. With every run you do, you will learn more about the game and how to survive. For example, if you die to Dread, you will learn to look out for that, and when you get the card that can negate it, Contentment, it will also teach you what you can do to get that card if the need rises again. As time passes, you will learn how to stay alive for longer, and you will get to see more of the game, and thus how to get back to the point where you died. You might also learn some tricks as you try out new things. 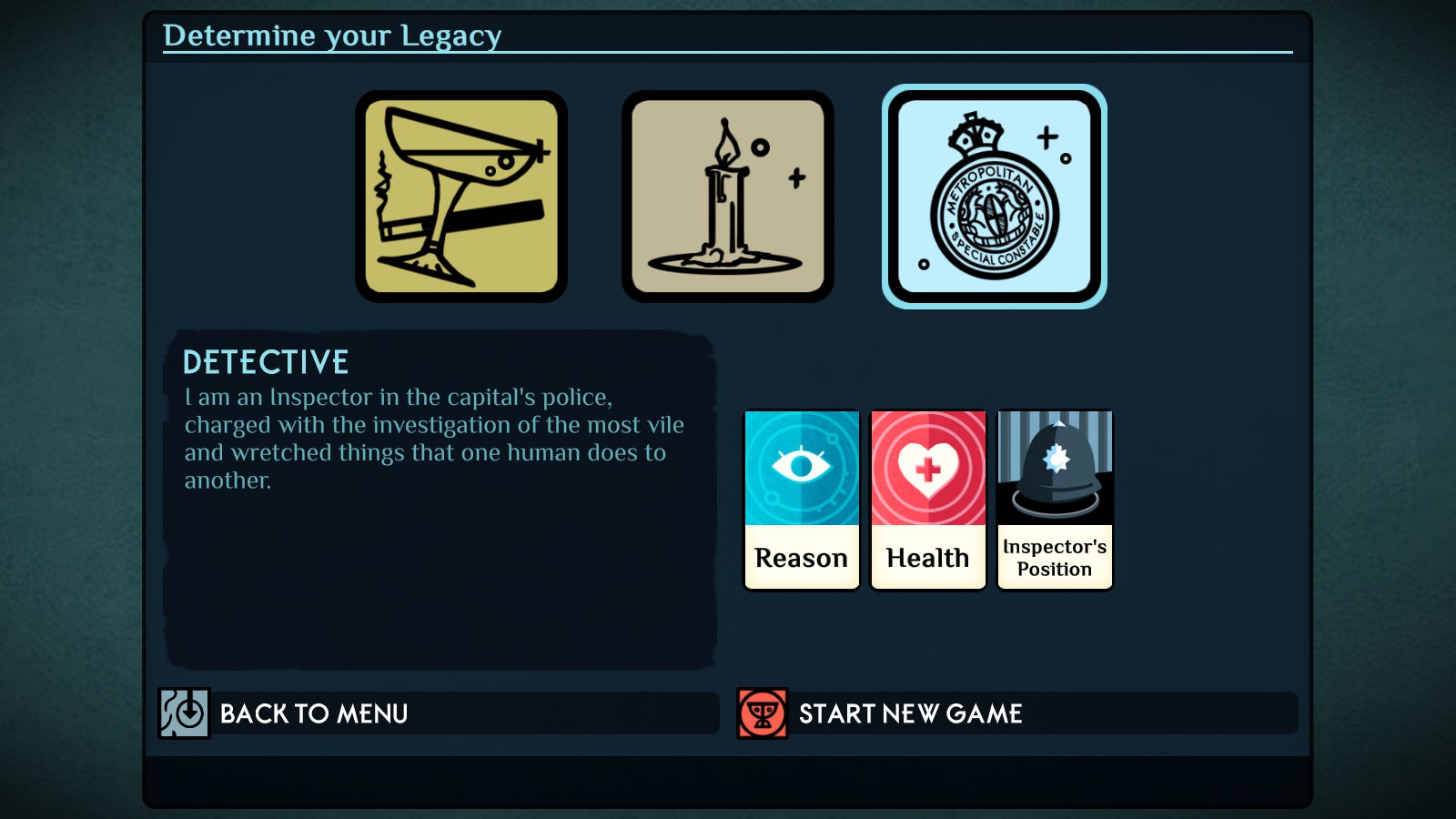 On that note, death doesn’t mean that you start out the same way. After your game is over, you get to choose your legacy. This will decide what person you were and will give you certain advantages compared to others. Different legacies will have you start with a different job, different amounts of Reason and Passion, and perhaps you will end up playing differently. Your previous character will also get briefly mentioned, so don’t forget to name yourself.

Nonetheless, there are a few downsides other than the lack of a tutorial, but they don’t necessarily bring the game down much. The one that you will come across often is that the table can easily become a mess of cards. Cards that were previously placed or stacked will go back to their original position if you collect them, but otherwise, I would recommend taking them out of the verb and placing them so it doesn’t risk pushing other cards away. Sometimes, I also wish that the angle for the table wasn’t slanted if you’re zoomed out almost all the way. This just gives me the thought of it always being just out of reach, and the descriptions can be hard to read if the verb is towards on the top. The last downside is one that just comes with the genre, which is that the beginning can become a little repetitive after having multiple runs. 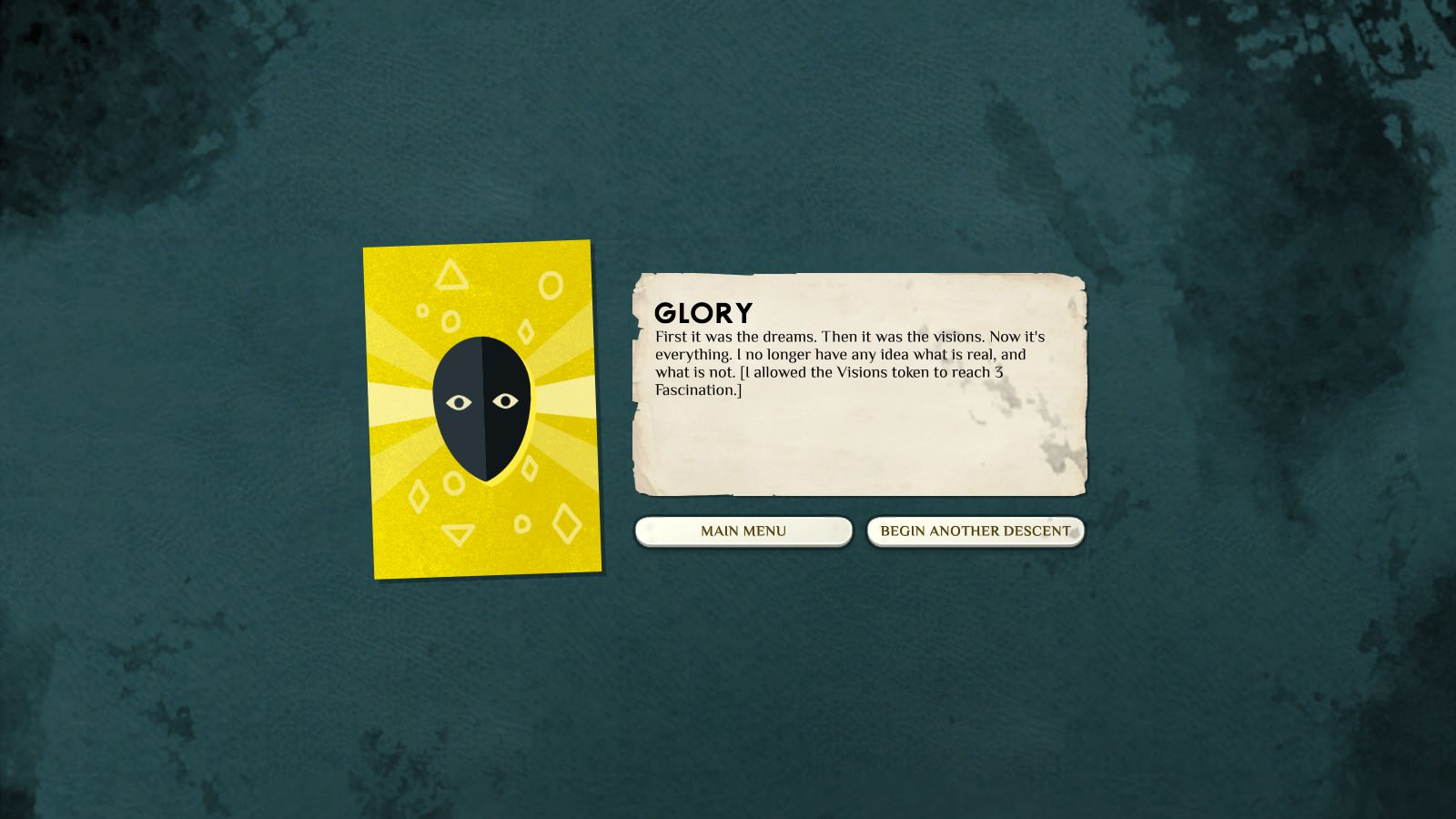 Cultist Simulator is definitely not a game that will appeal to everyone, but if it appeals to you, you will be in for a ride. With numerous things to do, multiple ways to win, and many things to learn as you transverse the magnificent writing each description holds. I’ve been having a great time with it, even though I still forget about game ending verbs, as I try to ascend. In spite of that, one thing that you should keep in mind is to not be discouraged if you’re really terrible or confused at first, as things will get better after you experiment and progress further. If you do decide to consult a guide, I do recommend going into the ones without spoilers at the beginning.  With more content planned to be added, I can’t wait to see what’s in store for future runs.