Report for duty, Agent. Time to gossip our way to victory.

With season one of Orwell — before we actually knew we would be getting another Orwell game — providing an incredible experience, who wouldn’t want to revisit that universe again? Who wouldn’t want to be the person that spies rather than the one that gets spied on? We return with a whole new case to dig our hands into and more secrets to peek at.

Right as you start up, you will see changes that improve the immersion. Before you are even put into the system, you have to take a small survey to determine if you will be accepted. If you played the first Orwell game, this is also the time to choose whether you want to link your playthrough with it. This not only lets you skip the tutorial but whatever you did in that save carries over. If you haven’t noticed yet (like I didn’t) this canonically takes place during the events of season one. While you and well… past you will not interact, you will see those events referenced here. Once you get the survey out of the way, you will get a cutscene that does a great job of visualizing the “fake news” focus and showing that this is voiced.

Just like with the first season, you will build up from the one measly site to the many you will eventually uncover. Each containing information about the place as well as the various characters that play a major part in the story. Certain phrases, words, photos, or sequence of numbers and/or letters will be highlighted as datachunks.  These can be uploaded into the Orwell system. You will come across datachunks that directly conflict with each other as well, and which one you choose to believe, or choose to upload, will cause a ripple effect. Be cautious as the conflicting chunk may not be on the same page. Will you wait until you get the other chunk, or will you draw your conclusion on the first one you see? Whomever these datachunks refer to will be uploaded to their profile (well, after you’re already on it of course) and be able to open up new websites. If you find any information about their phone or pc, well, let’s just hope that their device isn’t offline. 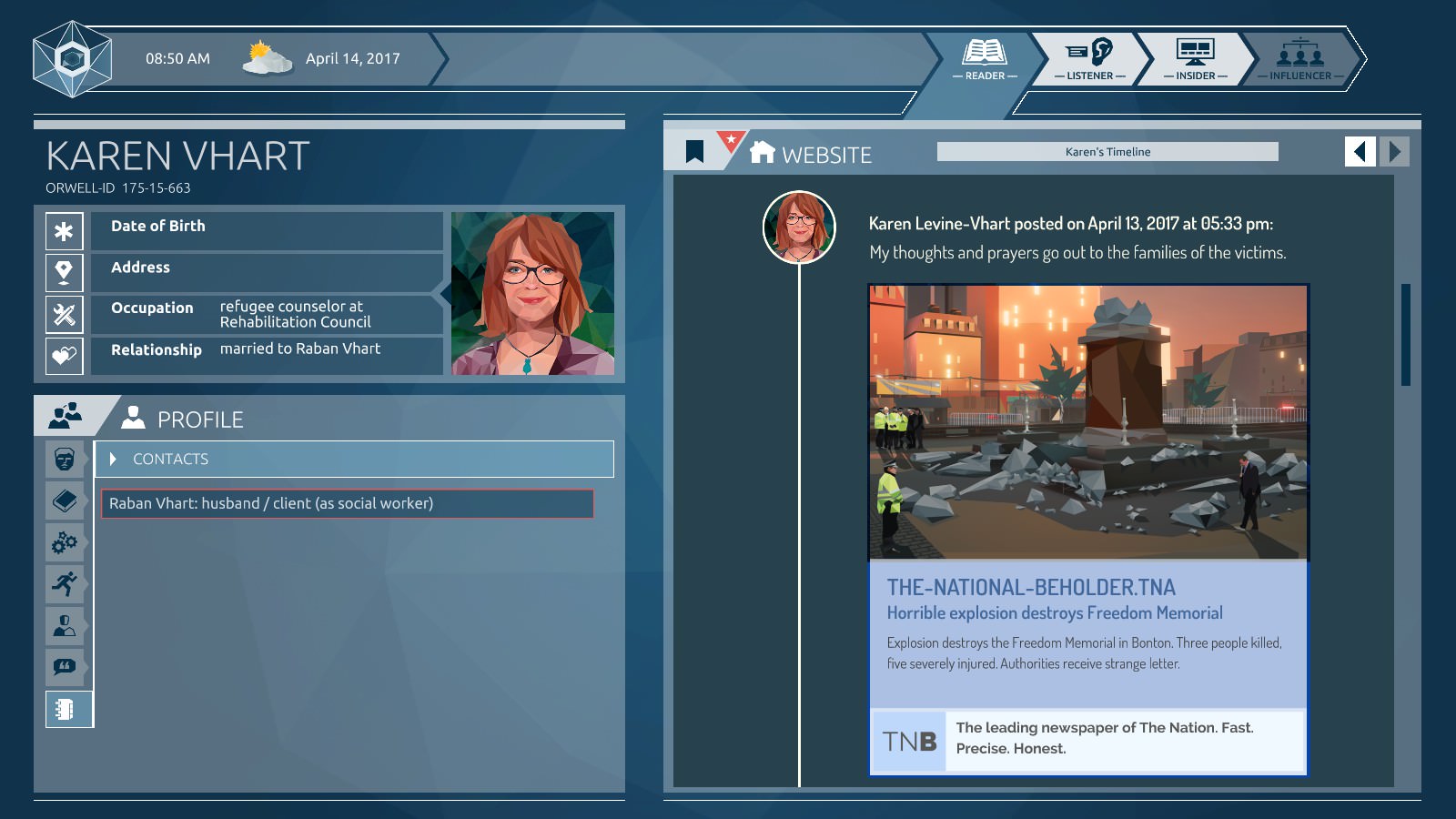 There is another change that you will notice once you start uploading datachunks, it now takes 10 minutes to do so. If you’re anything like me in the first game and just would upload everything, this will fight with your want to do the same. There are various events that will happen without you or not and an episode specifically puts you on a time limit to stress you out even more.

I won’t reveal what Influencer does, as it plays a huge part in the ending, but you might be able to guess based on what this season focuses on. I will say that I wish we got more of it as it showcases the main theme of this season very well. 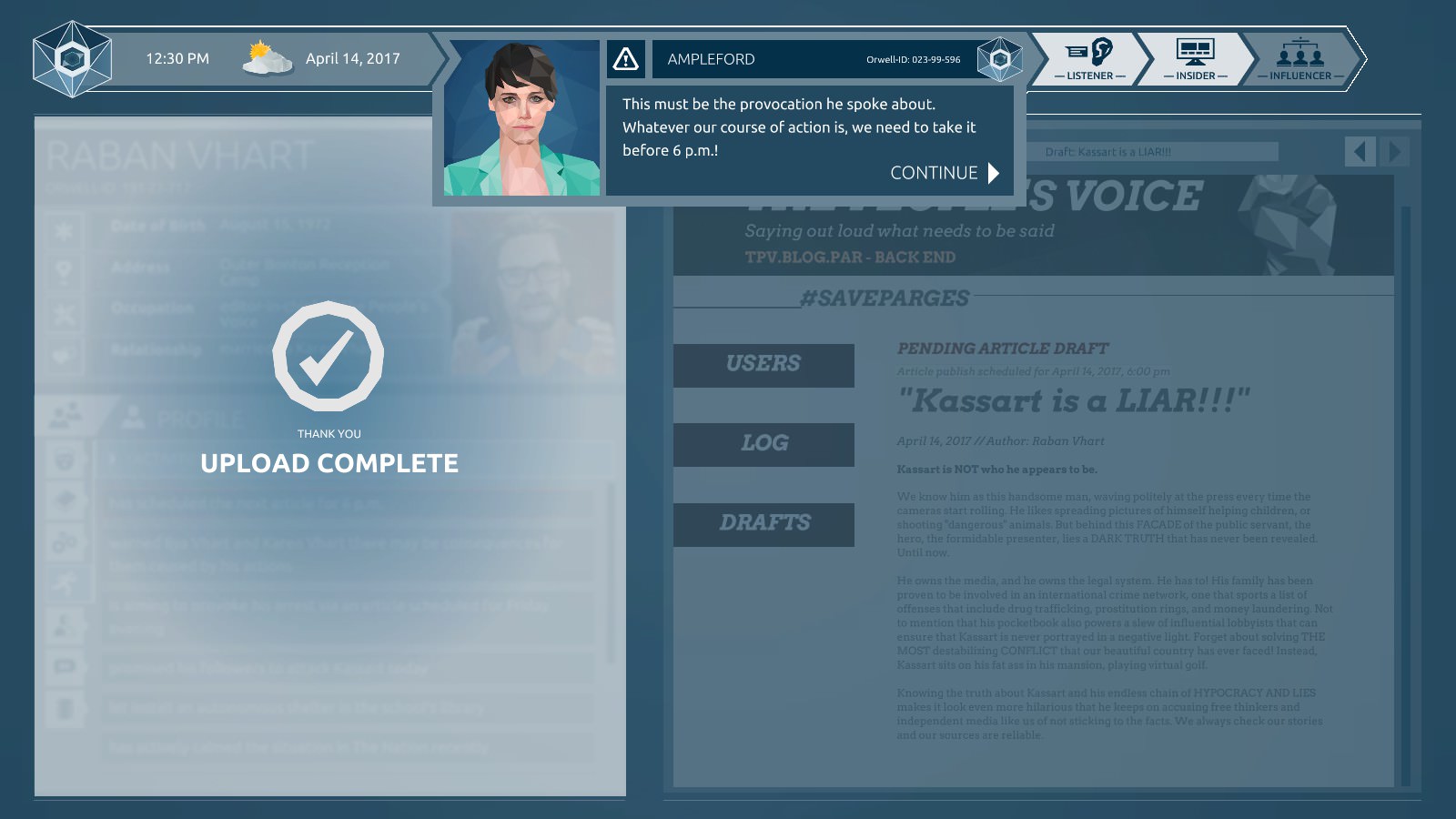 I also do like that there are now websites that has you enter in a datachunk, simulating you typing it in, to search something. Since you will often find these websites before you have the required word(s), this gives you another thing to look out for. As you keep that website in mind, finding the required information will give you a “oh I know where I needed this!” moment.

The interface and art style have stayed the same, and are as appealing as ever, as well as the soundtrack. With the addition of voice acting, it shines as the voice actors do a nice job. I especially liked the main suspect voice actor, Raban, who was my favorite of the bunch.

However, there are a couple things that don’t quite work out. After the first episode, you will most likely end up finding yourself stuck. It is very easy to miss the connecting dots that will lead to the next datachunk to jumpstart it back up, or perhaps you accidently missed a link you were supposed to click. Luckily, you can peek at the forums to get a nudge in the right direction as many others did have the same problem. 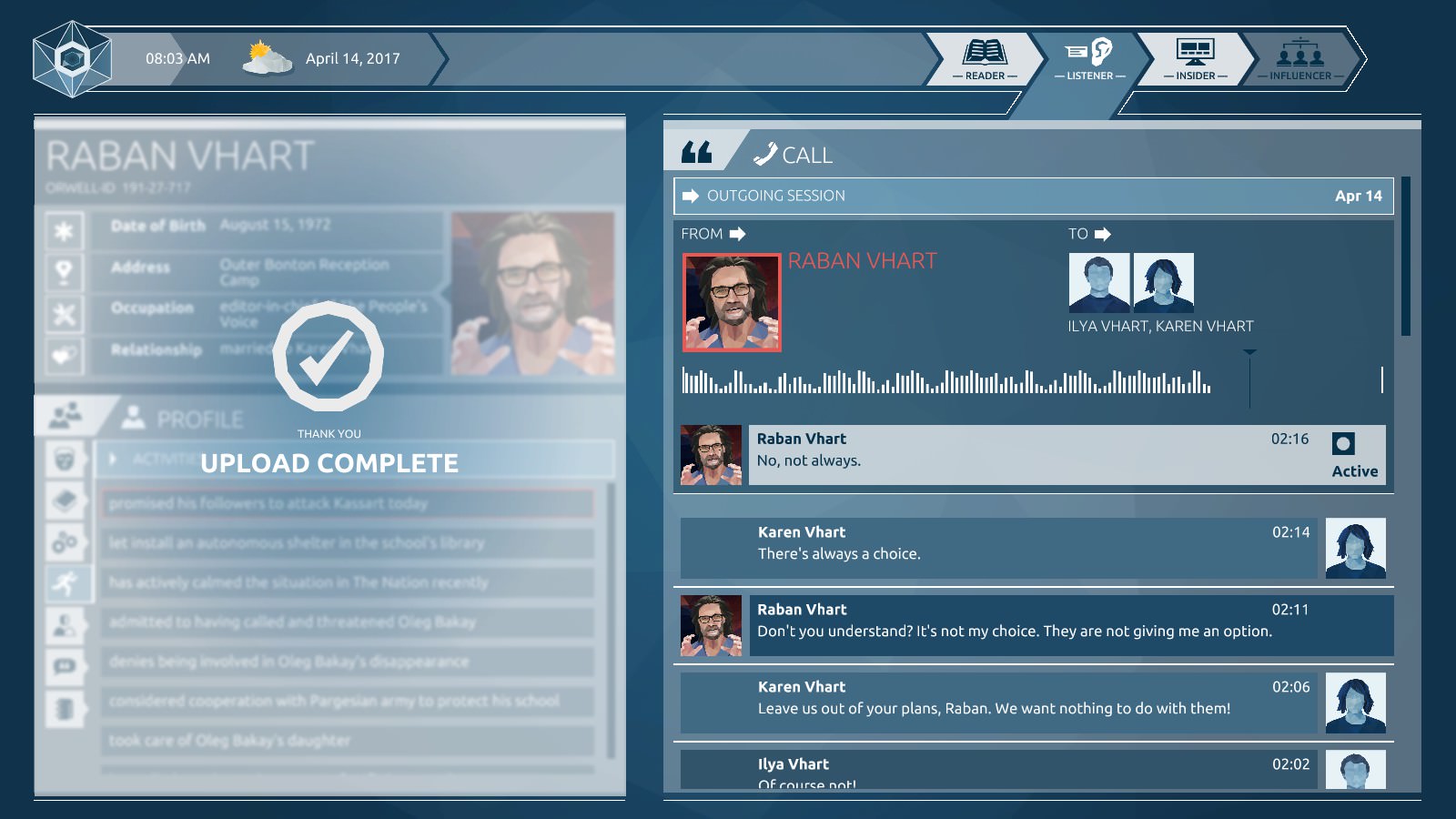 With the time limit in place, this can also cause you to overlook datachunks that would continue the story as well. It may look unimportant at the moment, but once you start hitting a dead end and you upload it because there is no seemingly important option not to, it reveals itself to be important. It certainly gets you into the mindset they want you to have, but some data connections don’t stand out properly.

It is also weird that you’re not able to upload datachunks during calls, especially when you can leave it in the background as you browse sites you didn’t look at yet or there are notable phrases said. This is due to the 10 minutes that will pass if you do upload datachunks, and it will not make sense in that context, but it is a weird decision when you compare it to the first season. 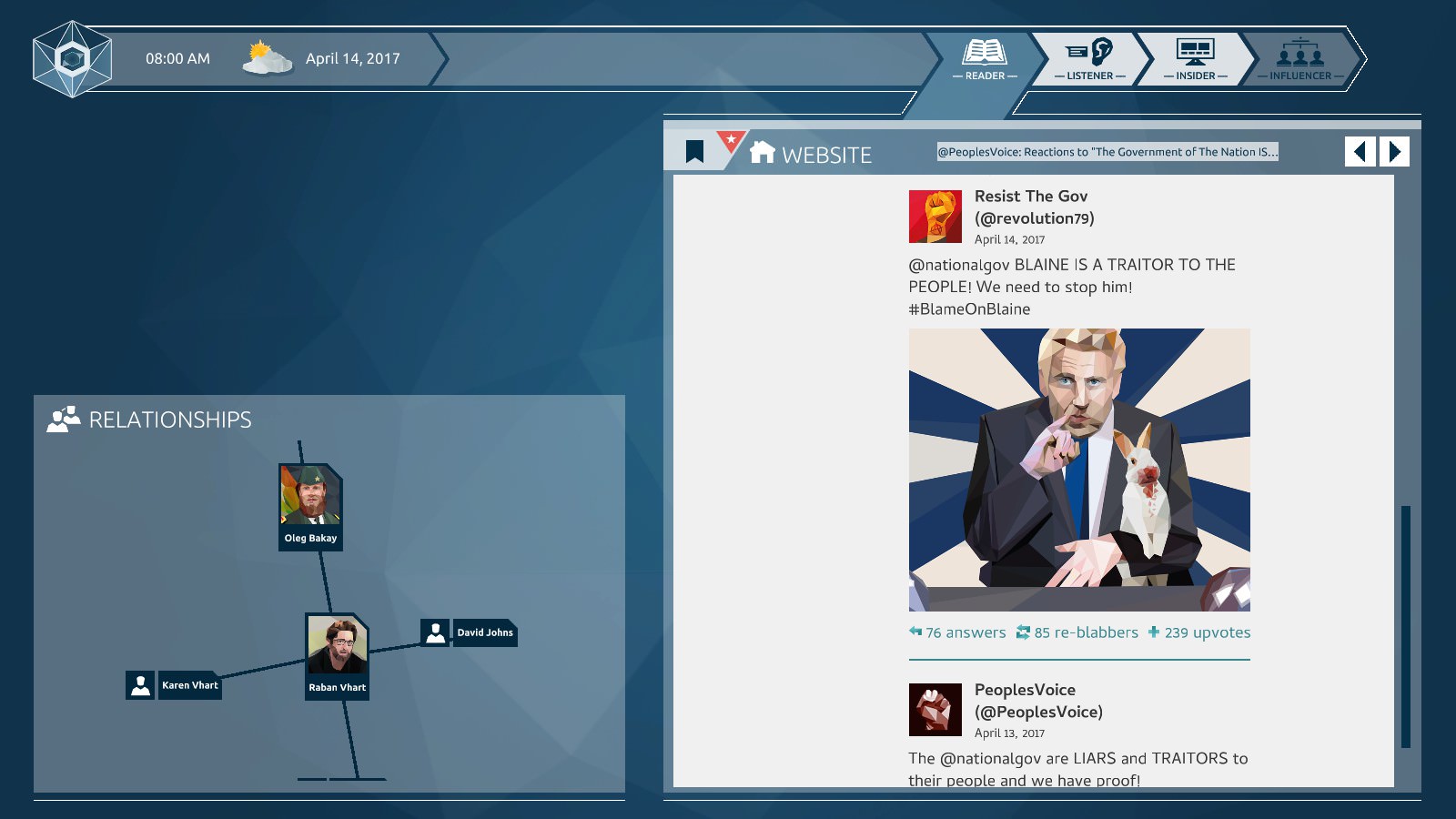 Orwell: Ignorance is Strength is a great addition to the Orwell universe. There are many additions that made the experience better and more immersive, even though in some cases it does hinder the experience. This season does a great job of showing how easy it is to just twist the truth and how easy it is for fake news to spread. I do highly recommend playing the first season, Orwell: Keeping an Eye on You. You do not have to play season one at all, there’s no information there you need to know to fully enjoy this, but the main focus is surveillance. So, if you wanted more focus on how surveillance can be taken to an extreme, season one has you covered. Will there be more Orwell seasons? Who knows, but I certainly would not object.