Die Young is a first-person survival horror game set on a remote island. Escape the island and its inhabitants, or die trying.

Die Young is a first-person survival horror with action platforming or parkour elements. It is the first Steam release developed and published by well-known game and bundle store, Indiegala.

In Die Young, you play a well-to-do young female adrenalin junkie visiting an almost entirely unknown island somewhere off the coast of Turkey with her similarly entitled friends. The trip goes horribly wrong, though, and you wake up with little memory of what happened, dizzy and extremely thirsty in a cave at the bottom of a well. As you stagger to your feet someone drops a hand-drawn map of the island down the well, with what you hope is an escape route marked on it.

Escaping from the well, your first thoughts are of finding water, and then your friends and a way off the island.

Die Young’s graphics are its big draw card. It uses Unreal Engine 4 and the developers aren’t afraid to make their island of doom look very nice indeed. From the middle distance, trees and plants look amazing. A simulated breeze wafts, blowing long grass in a wave, trees look wonderfully lush, and the dozen or so different plant species look very natural. Light and shadow are excellent, with natural and man-made lighting effects looking great, and the dappled shadow when you’re underneath a large tree looking nearly photorealistic. 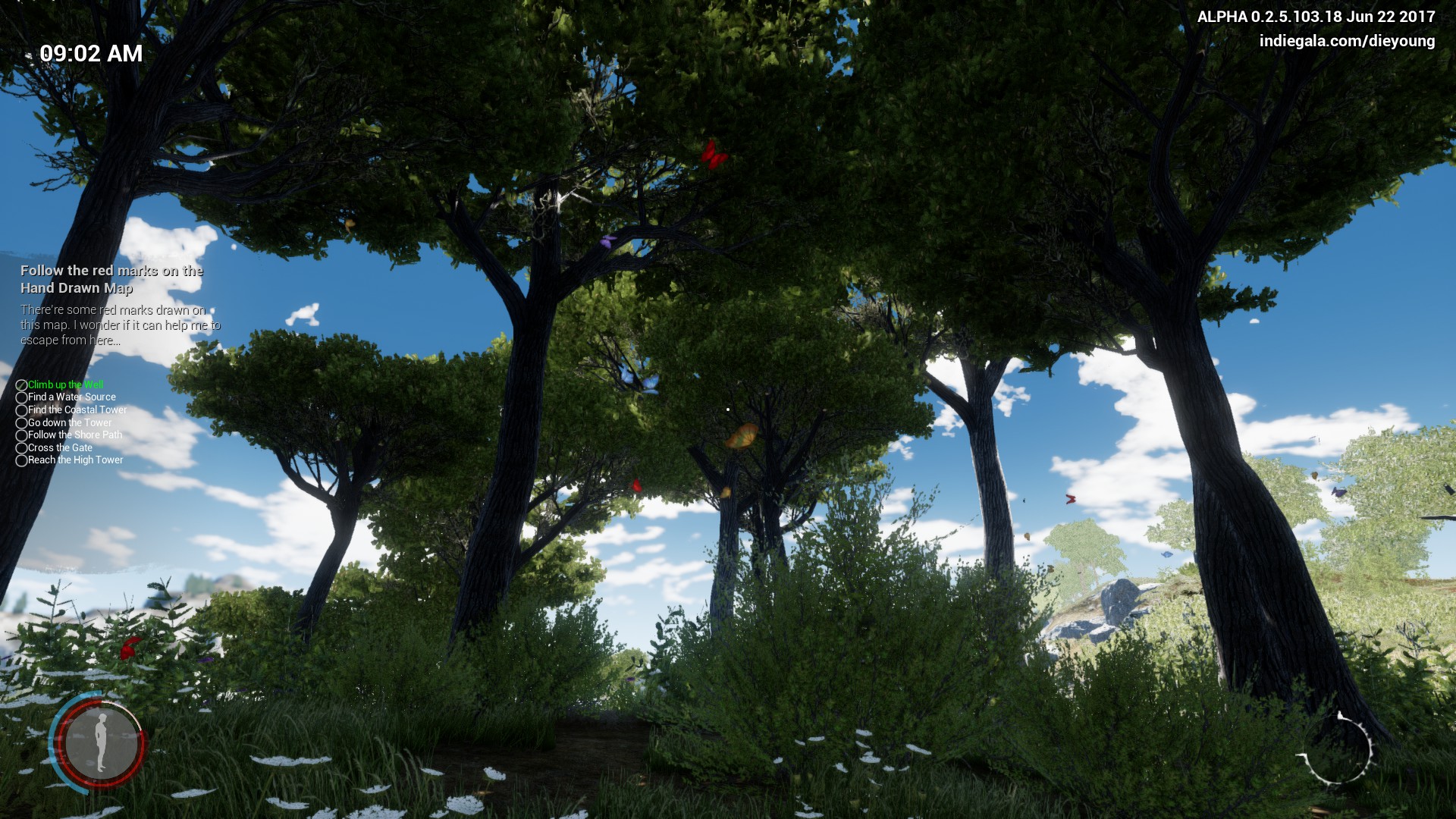 At other distances, though, it all begins to fall apart, even at maximum detail settings. Increase the distance and the island either looks blurry or miscoloured, with noticeable pop-in when rotating the view. Trees seeming to brighten and everything looks like you’re wearing glasses with the wrong prescription. Up close everything looks nice until it moves, with flowers looking very unnatural as they move in the breeze. And nothing reacts to you. Push through those wonderful close-packed sunflowers and you’d expect them to bend as you brush past, right? Not here, I’m afraid. You might as well be a ghost. 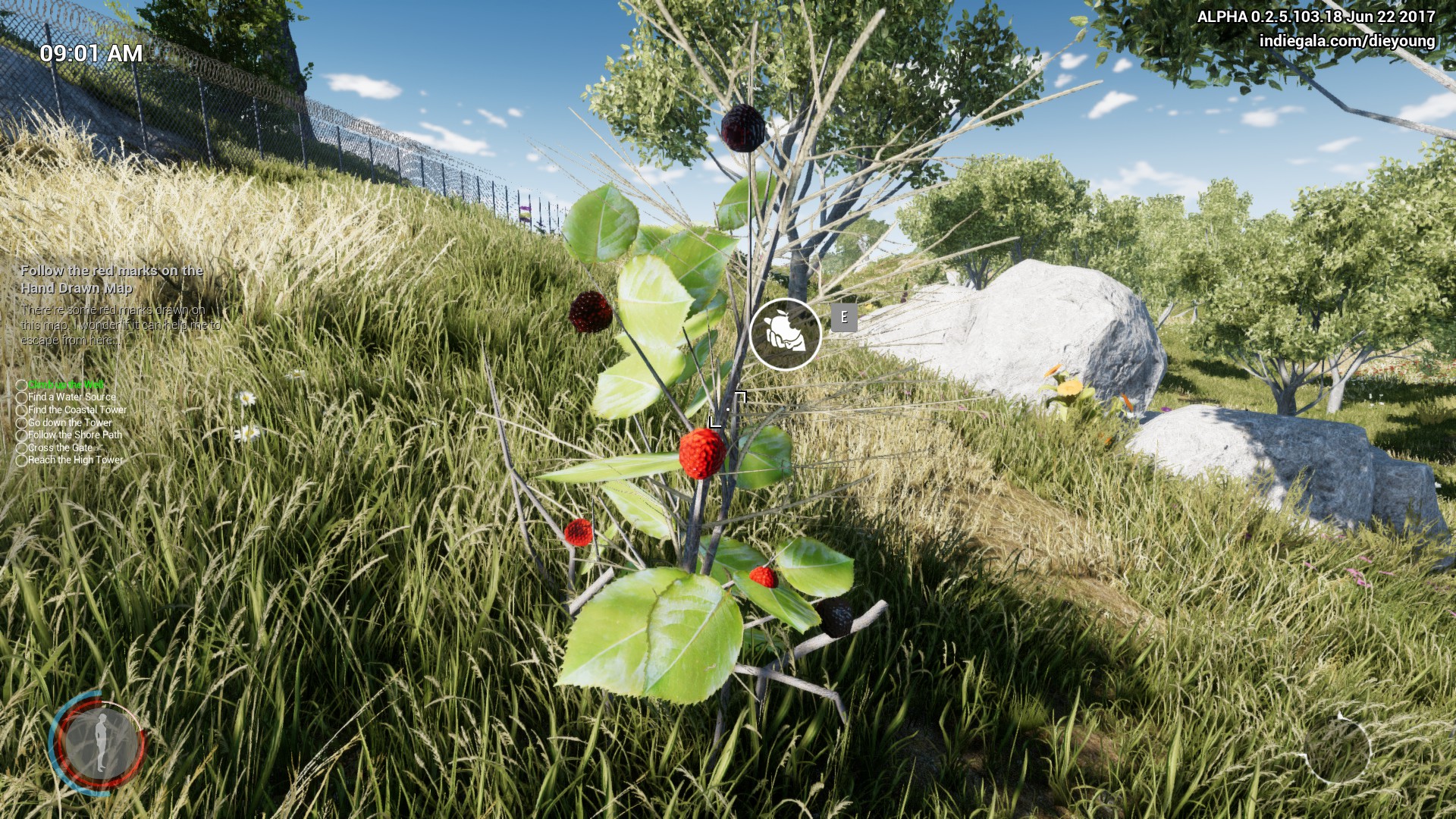 There are also a few issues with overly reflective surfaces not rendering quite right, and appearing almost like light sources, and shadows not quite working, like the rectangular shadow on the sea near the watchtower. Animals, too, appear a bit weird, with snakes moving completely unnaturally when chasing you, and rats being as big as large cats. 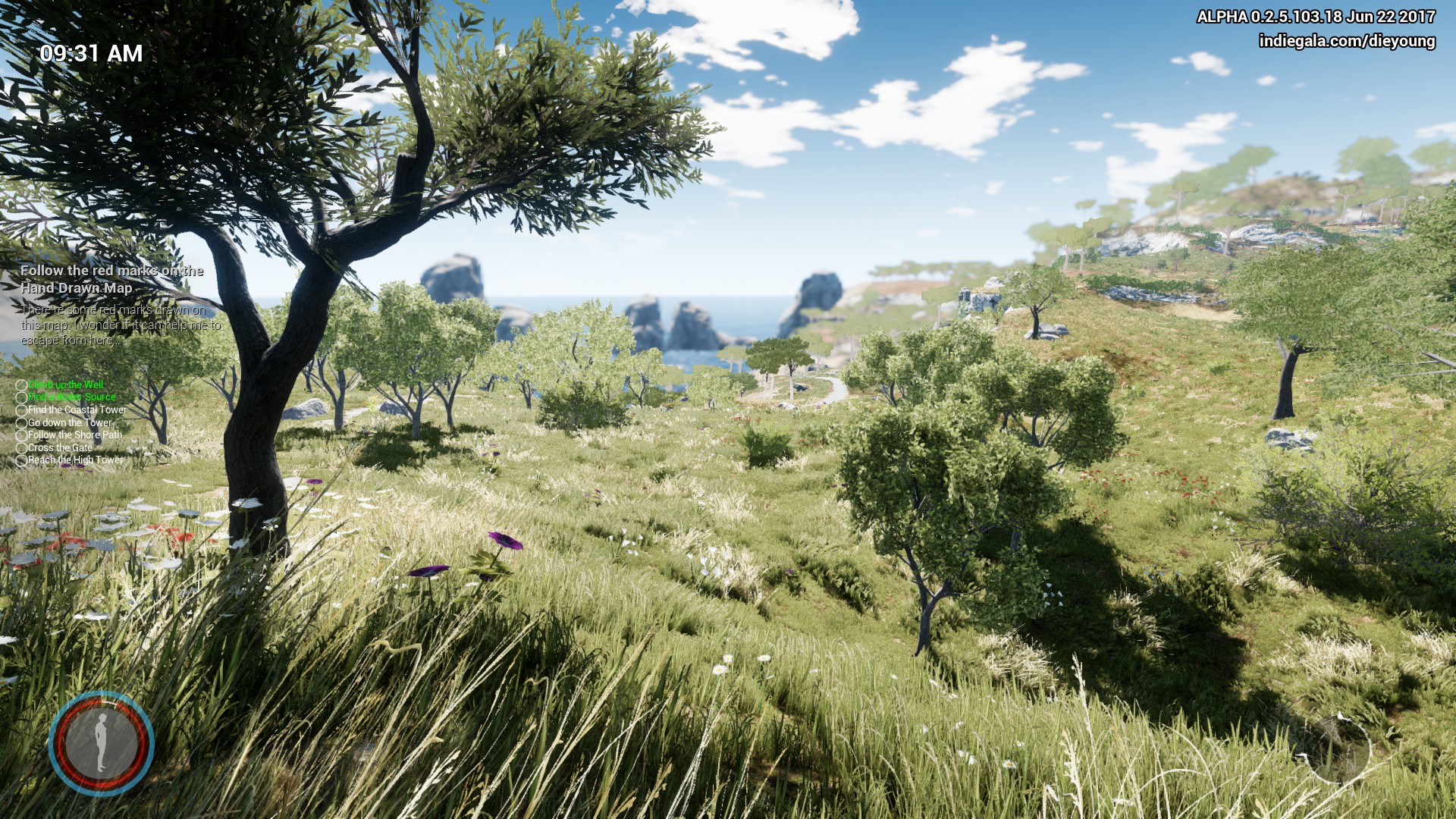 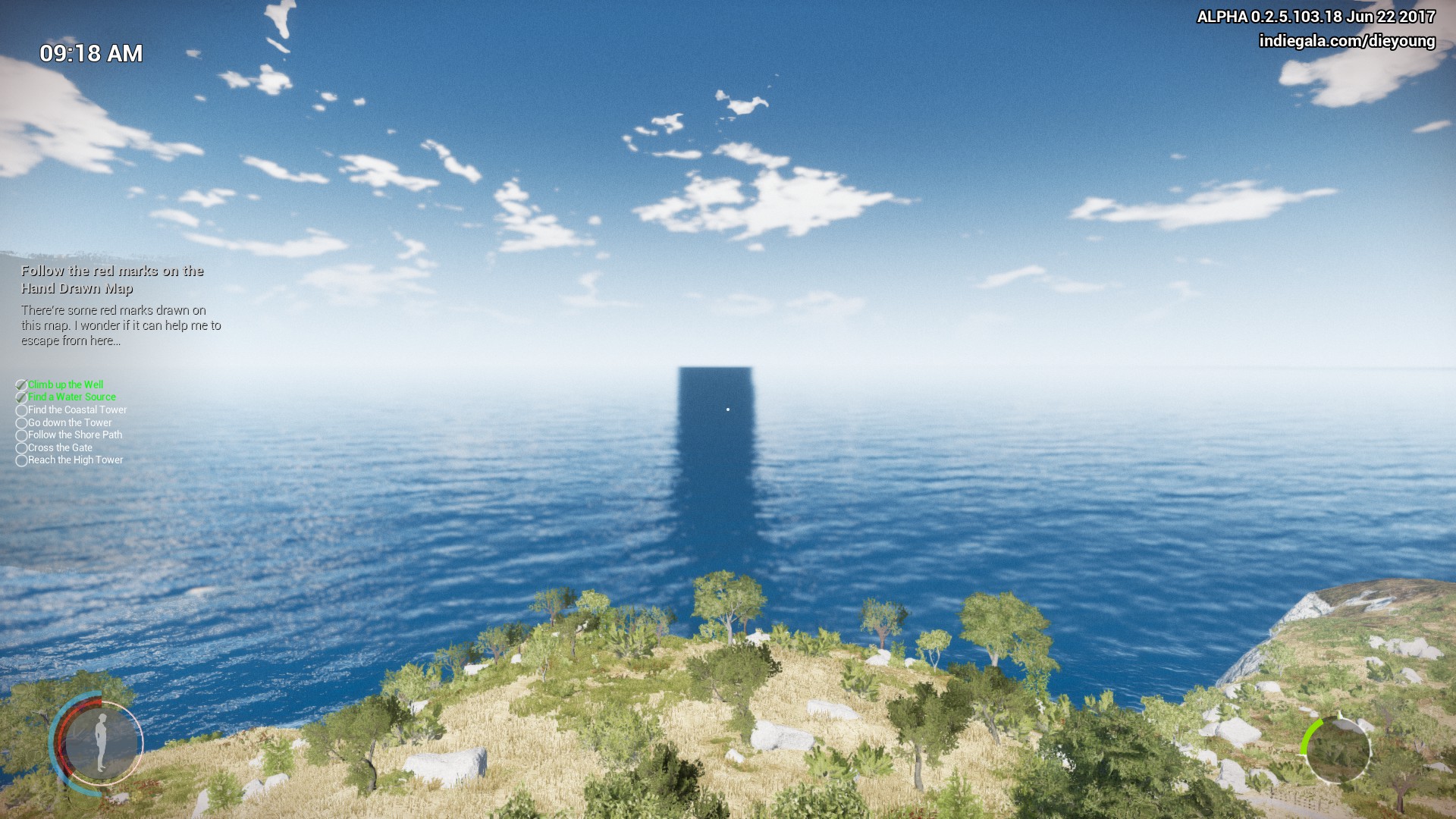 The introductory cut scene is in a sort of graphic novel style, and is quite nicely done. It’s not the best I’ve seen, but it works. It’s nice in a FPS game to be able to see your body and feet, too, ridiculously small as your feet may be.

There are plenty of graphics options for adjusting performance, and the game moves along at a reasonable rate. I had a few individual pauses, presumably when resources were being loaded, but nothing that really detracted from the experience. 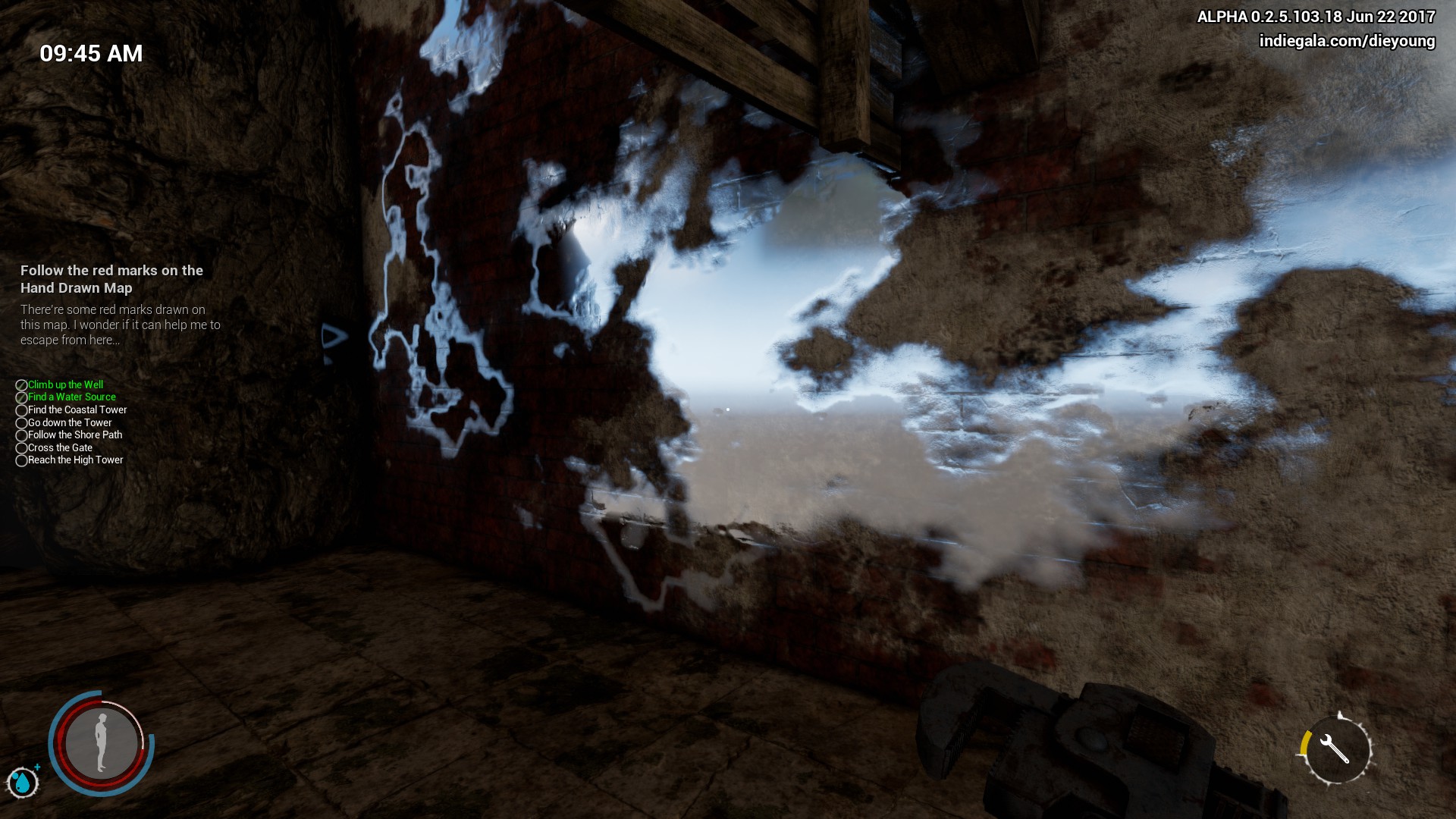 The title music is a very track. I’d call it indie rock, but I’m not that good with music genres. In any case, I don’t recognise the song and there seem to be no credits given for it. The music in the credits is pretty good, too.

Sound effects are what you’d expect, with the protagonist screaming, grunting, breathing heavily, and making various other efforts at sounding like an exhausted young woman trapped on a weirdo island. Animal sounds are well done, but become quite repetitive, with only a few samples for each enemy type.

The protagonist is voiced, with varying quality. Some parts sound quite professional, others less so. The voice volume doesn’t seem to be well normalised, with some parts being so quiet that I wouldn’t have noticed her saying anything at all had I not had subtitles.

Die Young is a blend of survival horror and action platforming played from a first-person perspective. I don’t really like calling the game a parkour game, as it’s really very limited in this respect. And I’ll say from the outset that I often find first-person action platforming to be less enjoyable than similar gameplay from a third-person view. In this case, Die Young is no exception.

Once you escape from the well, you’ll quickly find that the island on which you find yourself is relatively well realised, with a number of zones for you to explore. These are identified for you in side quests, some of which you really need to complete in order to proceed with your main quest: escaping the island. You essentially have free rein of the island from the beginning, but until you find yourself a water source and a basic means of defence, you’re probably going to regret it if you diverge from the quest map too much. 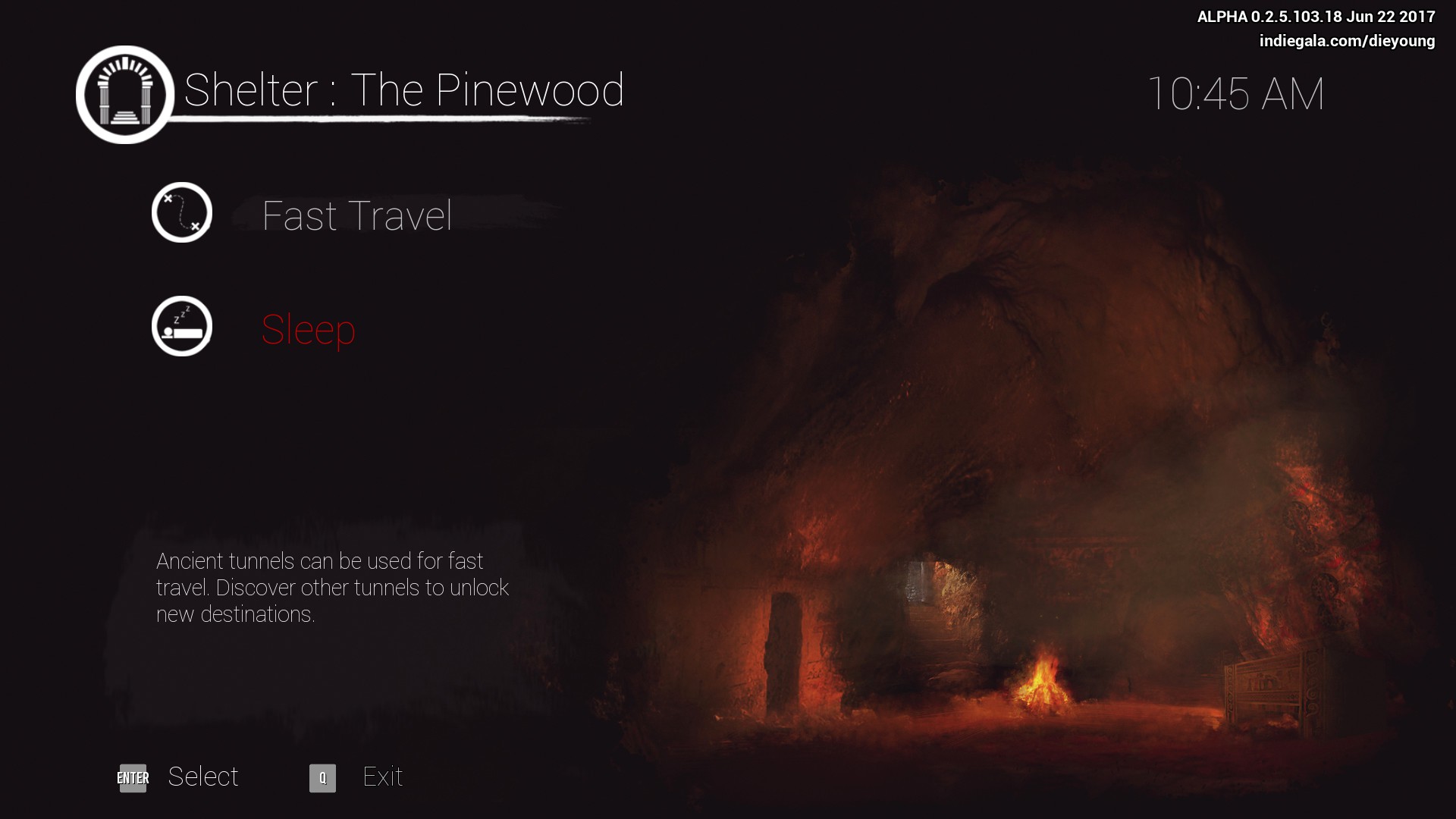 On the island you’ll encounter a number of rather large and crazy leather-obsessed gentlemen with sharp weapons, as well as various wild animals. Regardless of species, all of these characters or creatures react in the same way, following set paths in a specified area until they see you, at which point they give chase. And this is probably the biggest let down of the game.

To begin with, Die Young has the largest and most aggressive and deadly rats I’ve even seen, at least outside of Vermintide! And you’re unable to defend yourself against them until you locate something that you can use as a weapon. Come on! They’re rats, FFS. Just kick them or step on them. Problem solved. 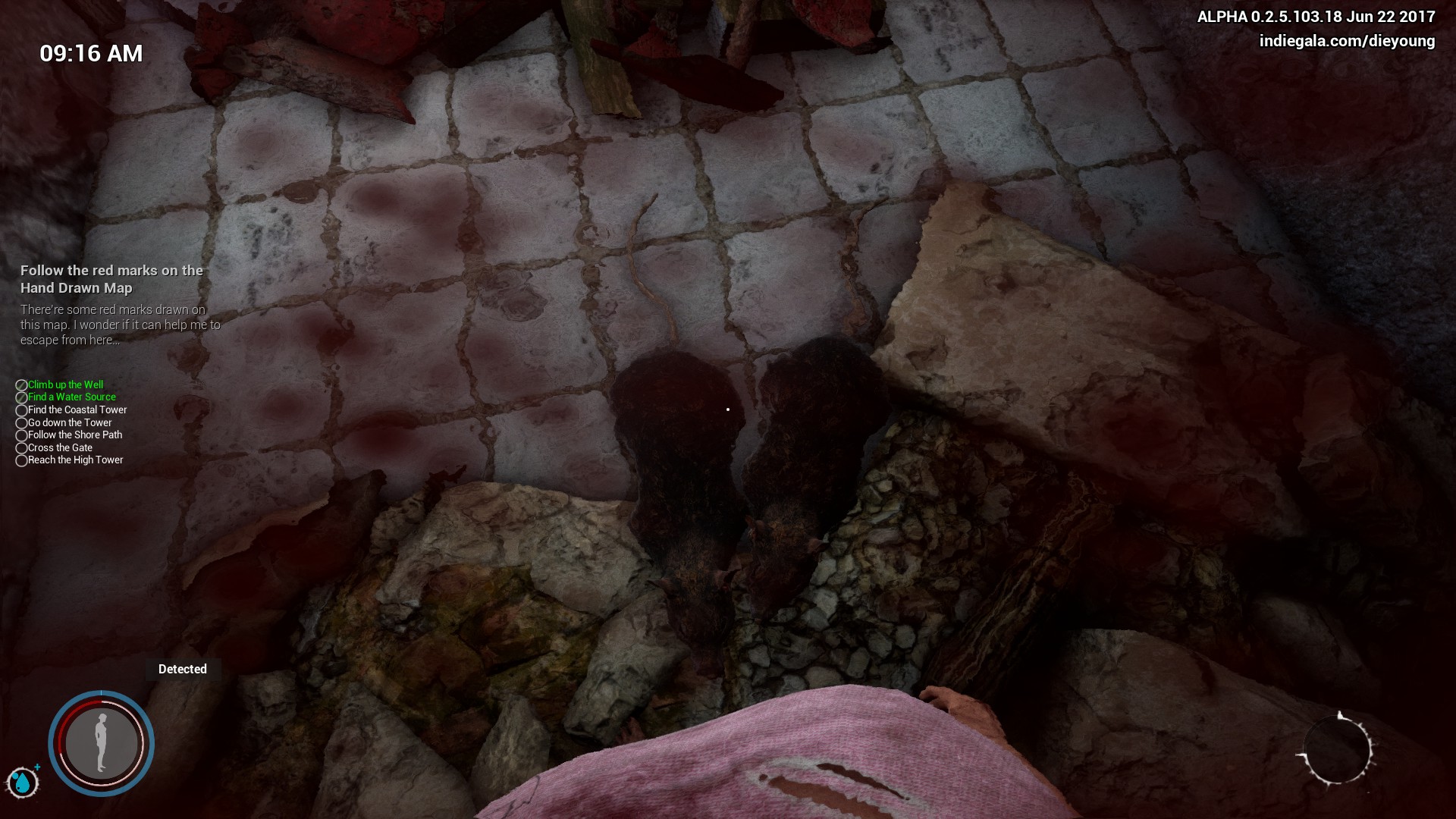 Snakes are similarly aggressive. Dogs are as strong as werewolves and, you guessed it, attack on sight. In fact, I haven’t seen a single animal on the island that didn’t go out of its way to try to kill me, at least until I stood on top of a rock and it forgot about me. The enemy AI is terrible, and it seems to be exactly the same programming no matter the enemy type.

Other than exploring the island, which is fun and interesting, and trying to avoid ridiculously aggressive animals that are otherwise on rails, which is not, Die Young also gives you some minimal crafting, annoying inventory management, and a lot of action platforming. There’s also a bit of basic melee combat thrown in, but you’re almost always better off avoiding that if you can.

It seems terribly unfortunate that the developers chose to give the game a checkpoint-based save system, with which you can only save at scattered ‘bonfire’ (‘campfire’ would be more accurate) save points scattered around the island. In the platforming ‘parkour’ sections in particular, these are far too few and far between, and you’ll probably find yourself doing many of them over and over again until you find a save point. 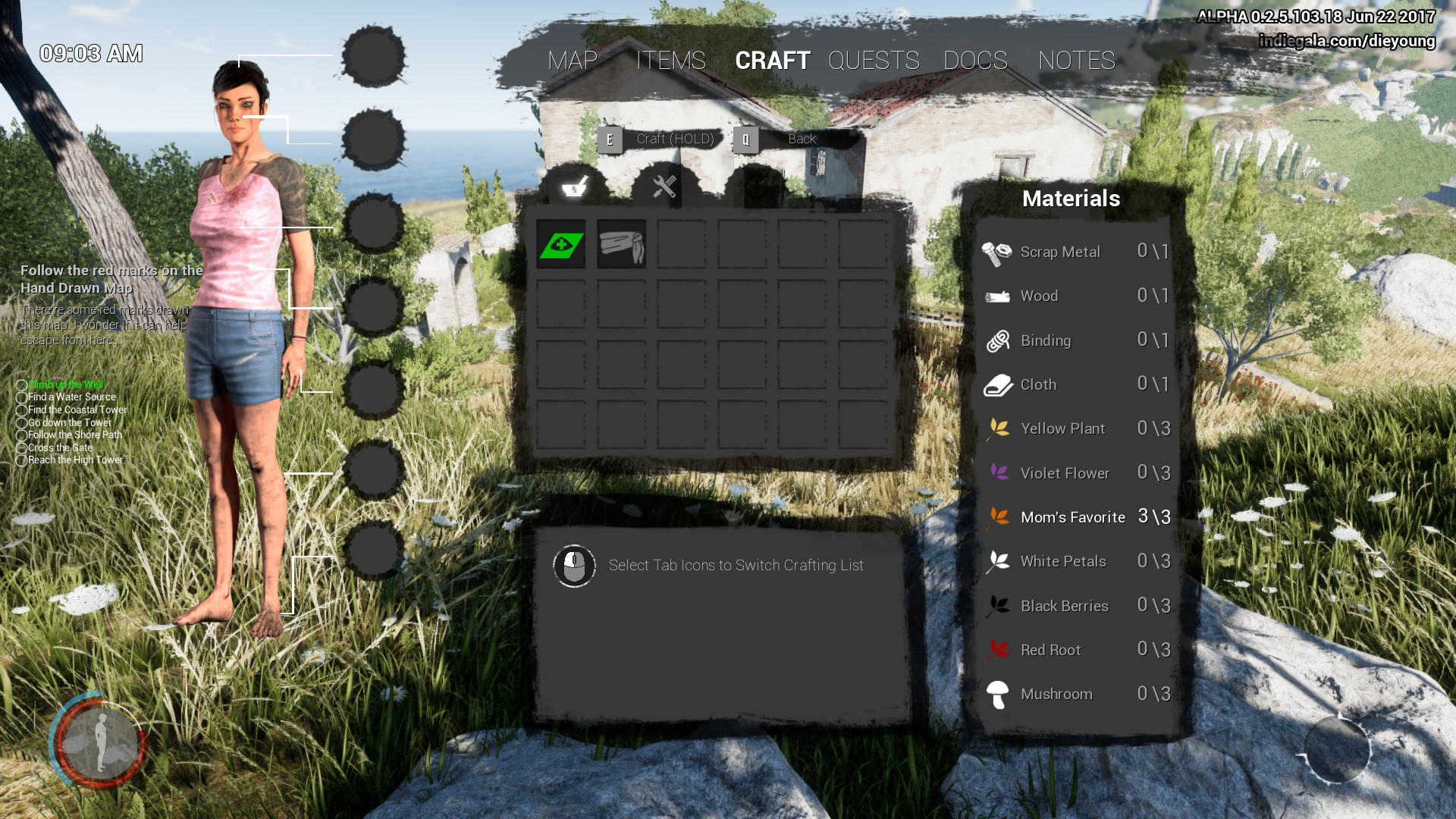 This checkpoint save system, together with the slippery platforming controls, broken stealth/detection, awful enemy AI, and the tiny amount of inventory space and annoying management thereof, make the game far more frustrating than it should be. I hope the developers choose to allow saving anywhere and drastically improve the inventory system before the game is released. I also felt that the combat and ‘parkour’ elements were rather weak; I felt more impressed by similar elements in the Tomb Raider reboot from a few years ago.

Pros:
+ Middle-distance graphics
+ Lighting and shadow effects
+ The island is well thought out and meticulously designed
+ Good feeling of tension 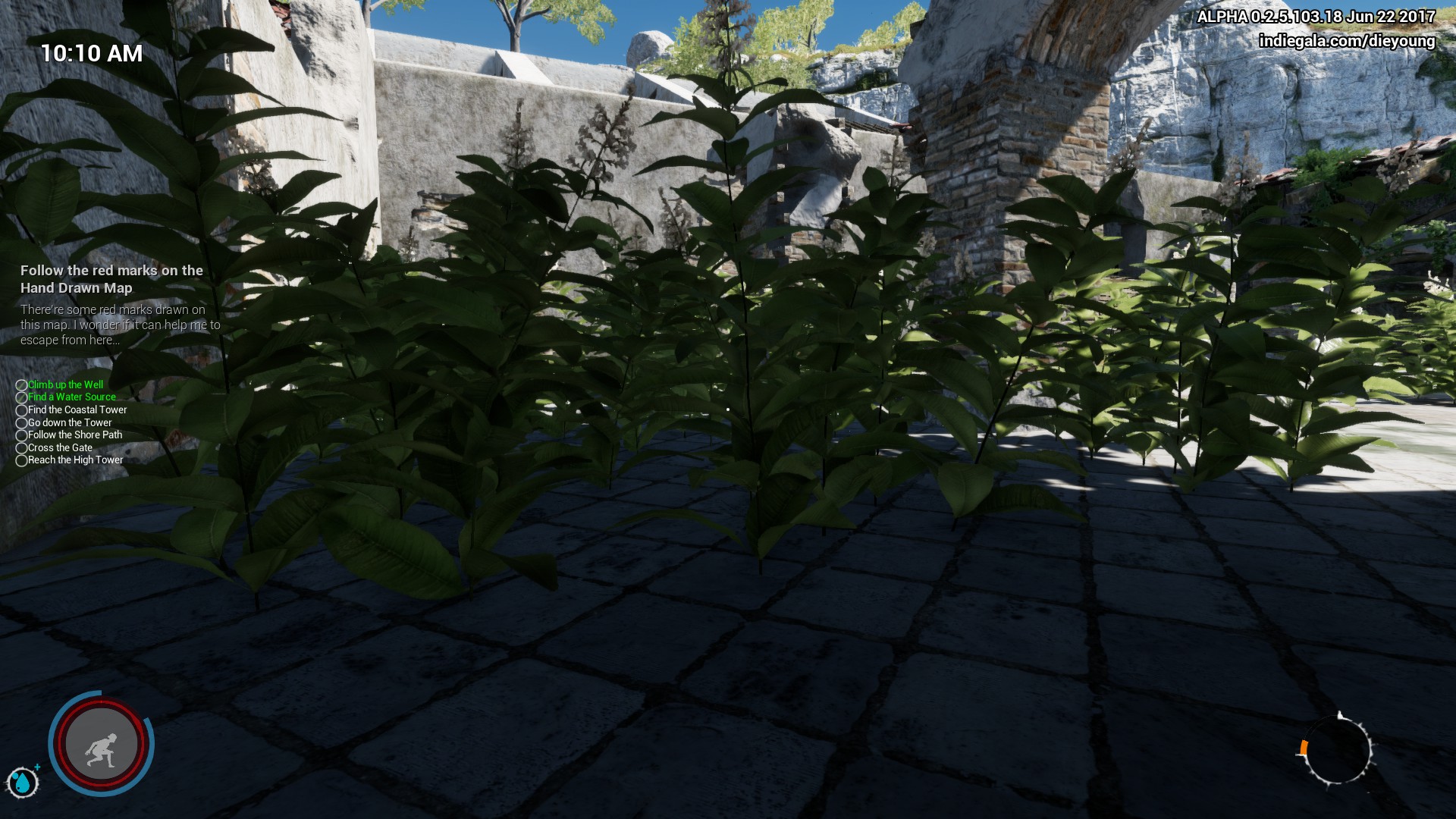 If you’re into survival horror, you should definitely keep an eye on Die Young. It has a few problems, but with the right focus they could definitely be fixed while it’s in Early Access. At the moment, it feels to me like a not-quite-as-good first-person Tomb Raider variant, with a slightly more believable plot and better graphics, but worse gameplay. 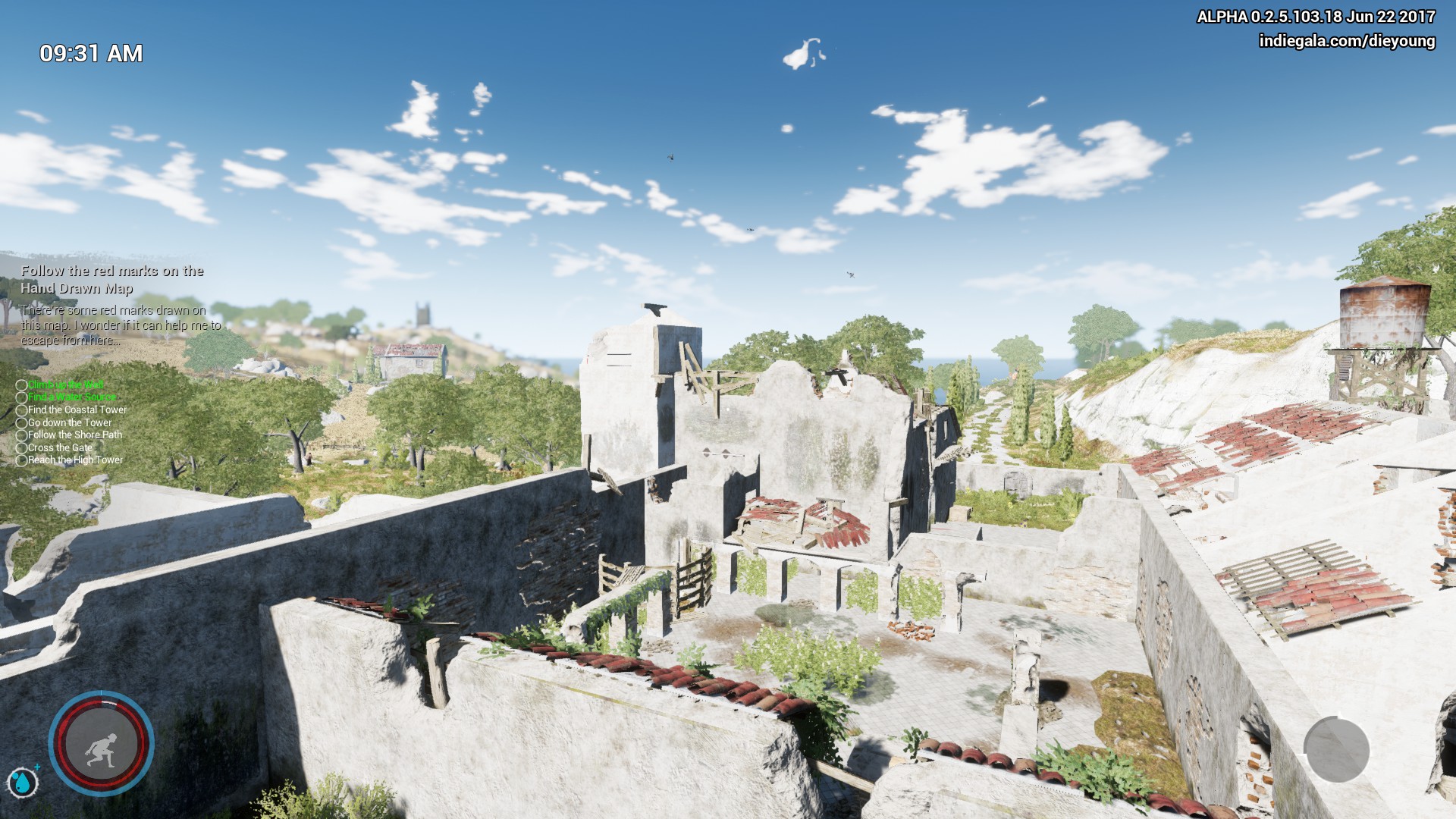