The local multi-player brawler is a prolific genre on PC, and I am always happy to find a new gem to play with my friends.

Ever since consoles brands began to drop  “fun with friends in the same room” gaming in favor of “pay for our online services on your big budget cinematic game with tons of DLCs”, only Nintendo was fulfilling that wonderful aspect of gaming.  Since then, however, games such as TowerFall on the PC have also been hosting a golden age of  4-player Versus games. There are many releases that come and go, and a rare few select ones make their cozy little nest on our hard drives for regular jousts with friends. Dynasty Feud is one of those.

The title directly hints at the main feature of this game: players do not select a single character, but a “dynasty” that groups different warriors according to a common theme: Knights, Vikings, Aztecs, Cowboys, Martial Artists, Pirates, Prehistoric Men and finally Science-Fiction Psychics. Each “family” has five members with each one functionally acting as a life for the player. Lose all five and you are out! 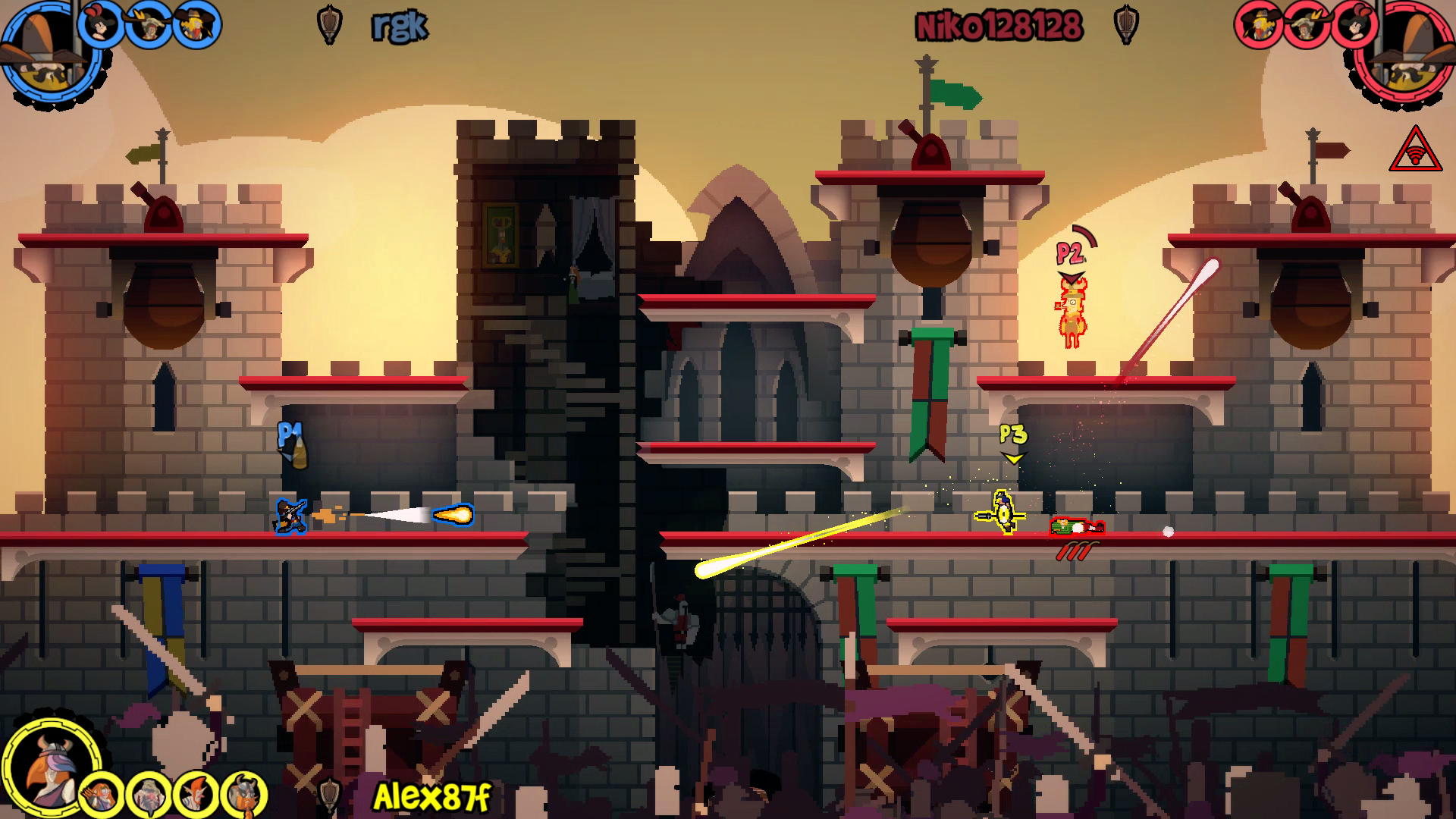 The strength of Dynasty Feud is that each character has its own unique play-style. One time you will be playing a fierce melee warrior with a dash, and then the next time you will have to handle precision aiming with the bow and arrow of an elusive archer. A game mechanic borrowed from TowerFall is the necessity to retrieve the projectiles from wherever they have landed, otherwise you might end up being unable to kill an enemy right next to your face. If you don’t like to pick up after yourself, stick to a Dynasty with a heavier focus on melee, or choose the Cowboys – they can reload their guns! Upon death, it is possible to choose which of your remaining characters you want to pick, meaning that you can easily find the right counter to what you are facing. Some characters even have several hitpoints (you can see the armor coming off) and a different move-set with attacks according to their current status. Dodge-roll, double-jump, and wall-jump seem to be present for all the characters, so movements are clearly not a limiting factor and navigating the levels is second nature. The only unwelcome addition is an “annoy” function that dead players can use, and some factions have a nuisance power that is way too strong (messing with the controls or rendering the screen unreadable). 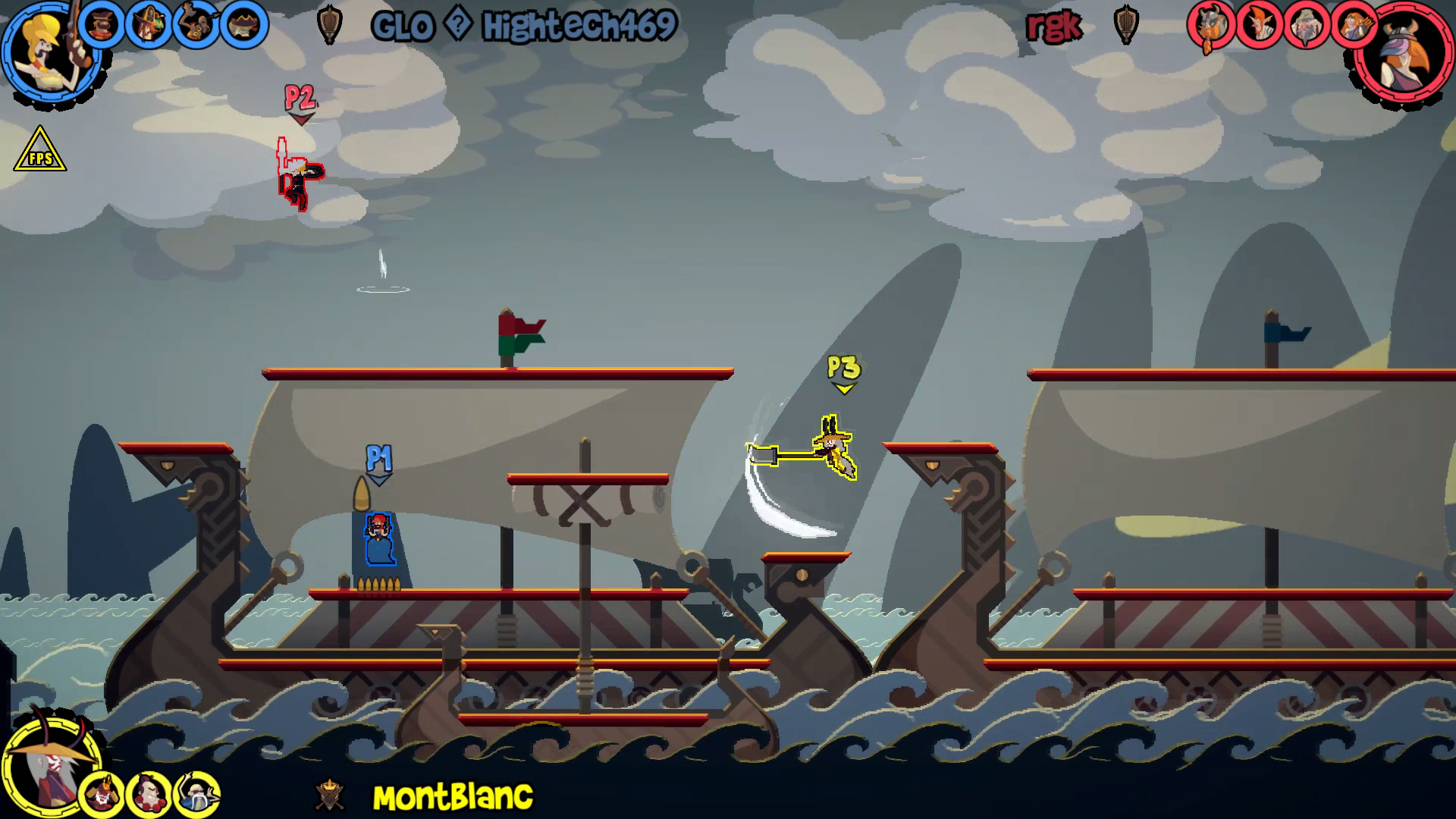 As you can imagine, with eight factions each sporting five characters, there is a lot of variety to this game. Even the levels are all different, with traps or devastating events that destroy the arena or reshuffle the platforms. I love when the maps evolve, more games should do that. Each Dynasty has its own ultimate skill, unleashing a very powerful attack that takes a quarter of the screen. However, while some of these attacks are almost impossible to avoid, others are easier to dodge which can create a slight imbalance. The Aztecs even have a completely different system, they can sacrifice a character to transform the next one into a more powerful being. 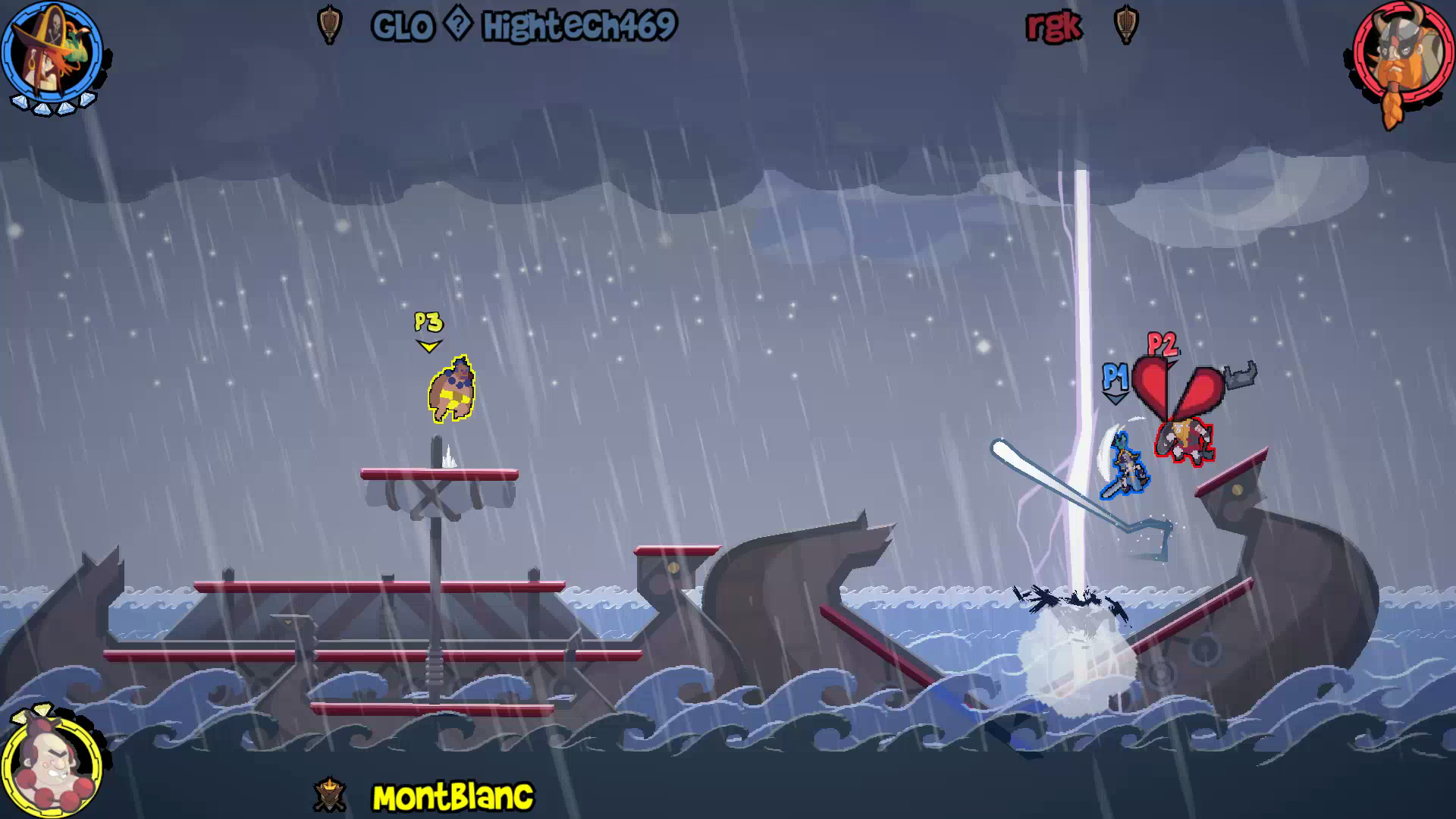 The Noob and the Master

There is a lot of depth to be found in this game, and that fact has advantages and disadvantages. The obvious benefit is that there are always things to learn and master, you won’t get bored quickly with this one. A group of dedicated players will have a hell of a time with Dynasty Feud! But then, what happens when they bring a new player into the fray? Most likely, they will get slaughtered and run for their mother mumbling incoherently about “invisible ninjas”, “hit my head against a stalactite” or “a kitty made me drown in the water”. The chaos of beginners fighting each other is an absolute blast, but seasoned players can use their knowledge to prevent even a single chance to those that are trying to come to grips with the features of one character after the other. Thus, if you intend to play this with a group of friends make sure that everyone is learning at the same pace. 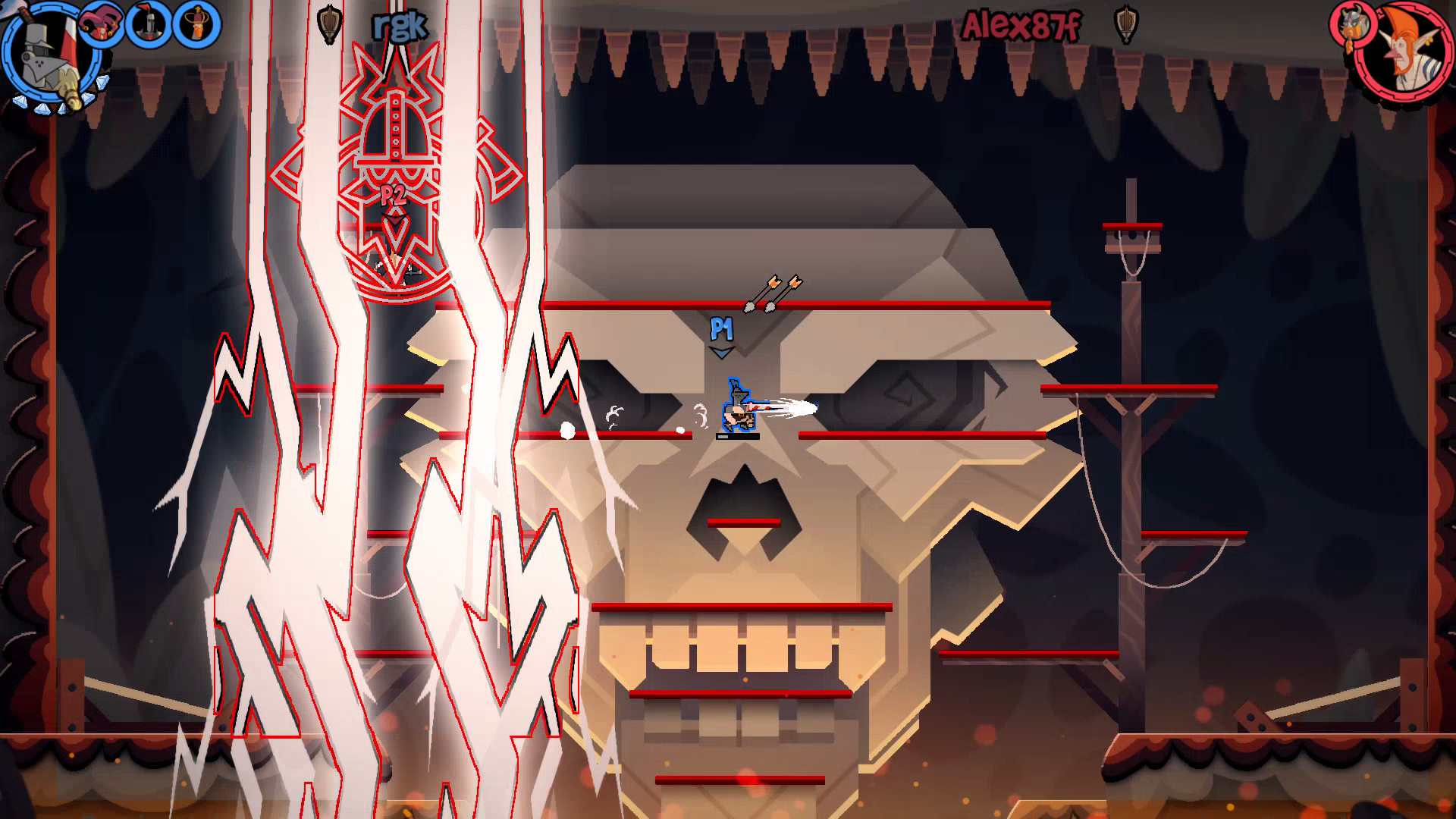 Thankfully, there is a training gym to select a specific character and master it in a controlled environment. Not all factions are available right from the start, most need to be unlocked. It does not take too much time, but it was still a bit inconvenient. The game lacks a proper single-player experience, but this is totally not necessary to enjoy this sort of game. The welcome addition that is often asked but not always present, however, is the presence of an online multi-player. However,  finding random online players is never guaranteed in any game.  Either get yourself a group of friends, or connect to the official Discord (there is an icon in the menu) and ask for people to play with you. Beware, they might be much more experienced than you!

The controls work perfectly fine with a controller, though, a keyboard should be avoided since it severely limits the possible angles of the characters that can shoot at 360°. Overall, the feel is not as lightning-fast as a game like Samurai Gunn, the pace is slightly slower. Dynasty Feud can be really fast, but overall it is more tactical especially with all the different attack styles that can be constantly analyzed. 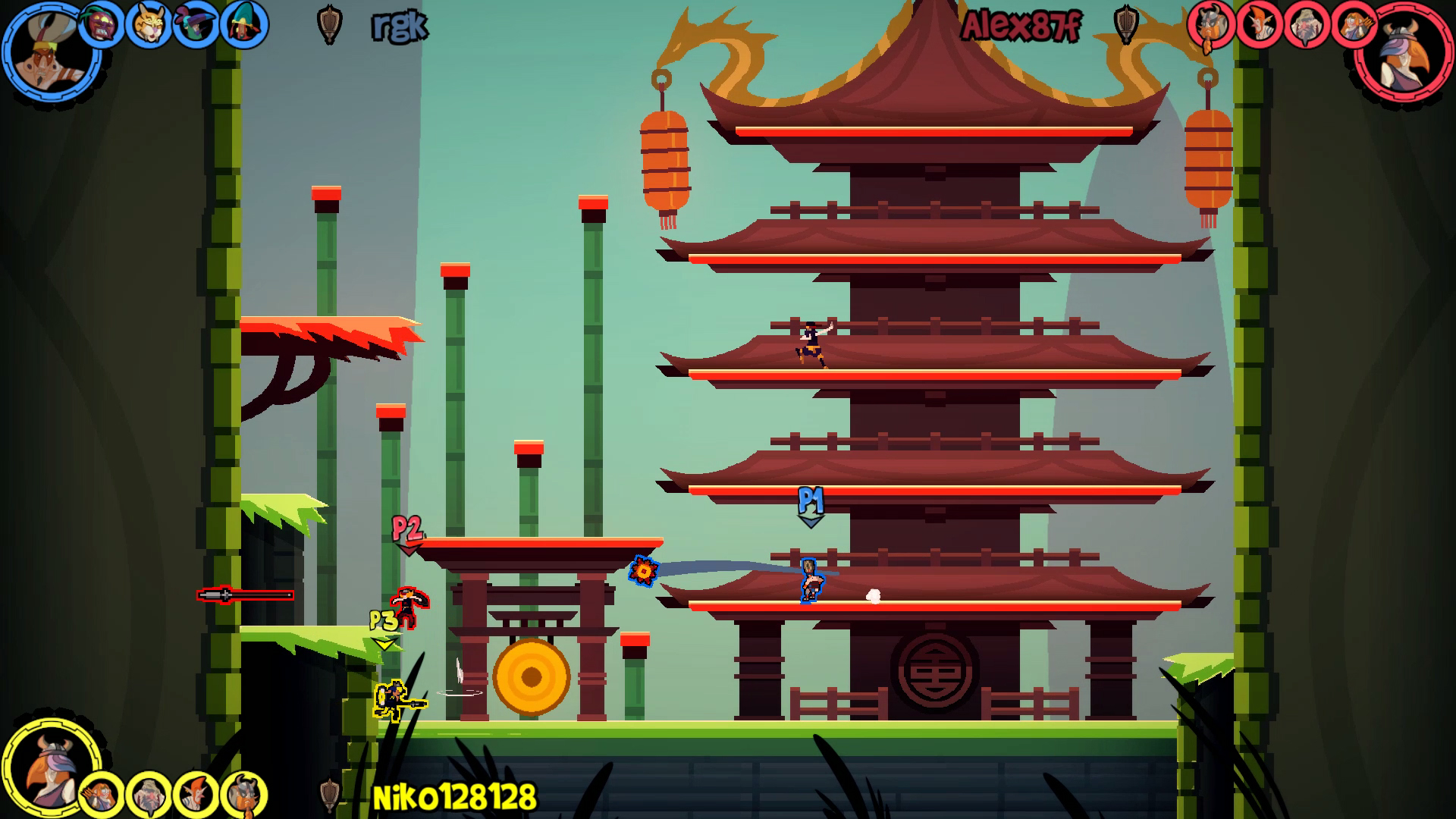 Dynasty Feud is excellent. Plenty of variety and depth thanks to the insane number of combatants each with their own unique play-style, and the maps with apocalyptic events. The basic common abilities such as wall-jumping and double-jumping are empowering. The game has all the expected features from rebinding keys to online play… there is no obvious flaw in this game. Minor grievances towards the “annoy” function, and the only true downside would be the effort asked of newcomers to understand so many game mechanics to catch up to seasoned players. It is still not as difficult as the more technical fighting games, so it does not take too much time to pick up Dynasty Feud and start having fun. If you are looking for a new Versus game to play with your friends, I highly recommend Dynasty Feud.