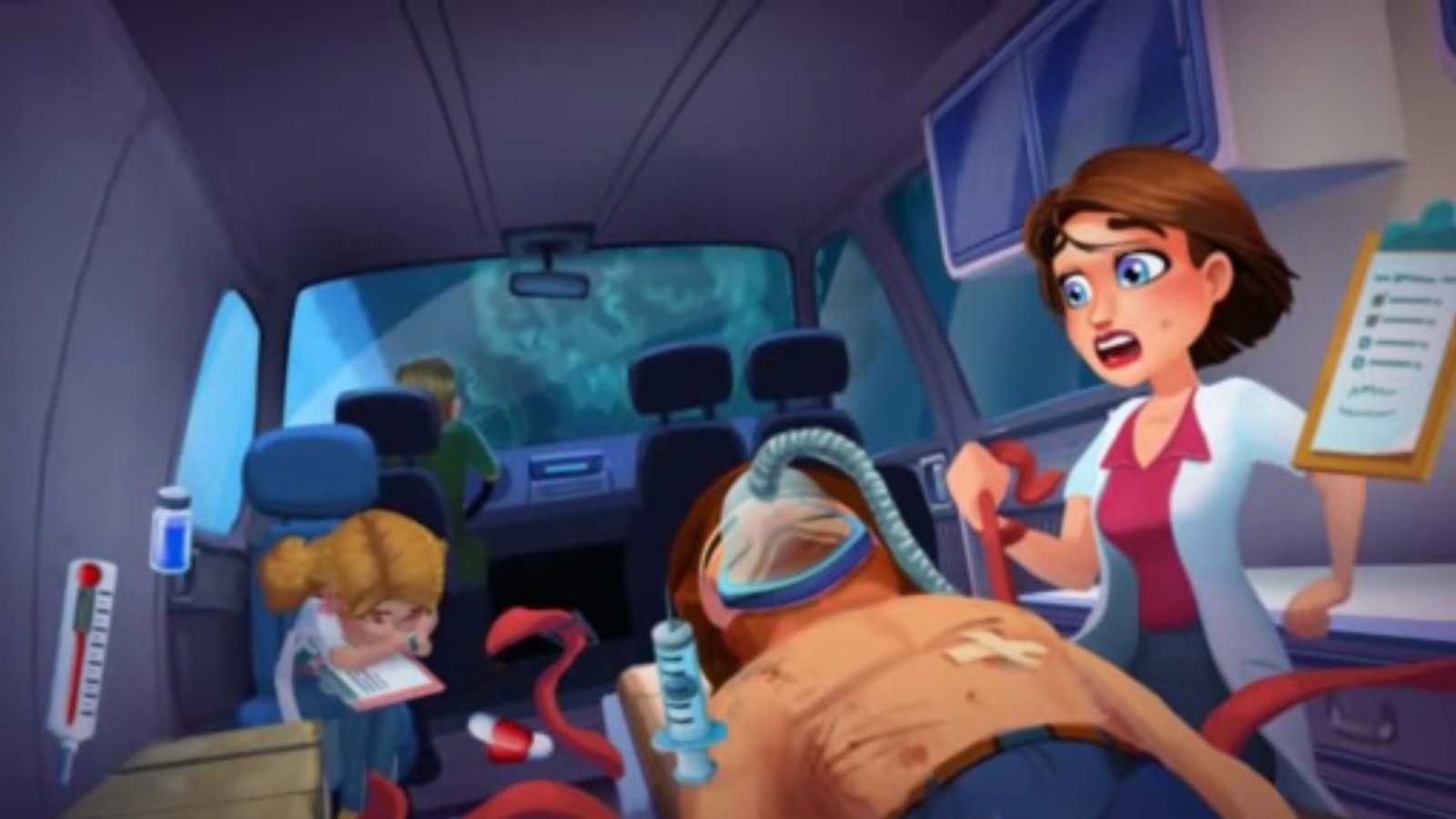 At least things can’t get any worse!

It is becoming common to see PC ports of console and handheld games. It is not surprising seeing mobile games joining in as well. However, there is a vast distinction between how they are initially treated by PC gamers. While console and handheld ports are only called out if the port was obviously not well done, the majority of mobile ports are almost instantly called out. But there are some great mobile games that have made their way onto Steam, and Blue Giraffe’s games are among them.

Heart’s Medicine – Time to Heal, being the second installment in the series, brings us straight into the middle a tense situation as the game opens up with a rushing ambulance. Joe is at the wheel trying to drive in the rain, while Allison attempts to stitch up Daniel, with Jenny trying to help. As Allison manages to treat Daniel’s injuries enough that he can survive the trip to the hospital, Joe loses control and the ambulance plummets off a cliff. The game then takes you back to three months earlier. This opening sets the tone you should expect, with the literal cliffhanger teasing you to find out more. We learn that Allison, whom the series follows, is wanting to intern in the Surgery Department. But the head of Surgery will not take more than one intern and there’s already someone in that position, leaving Allison having to wait for the position, and start out as an intern elsewhere. Allison does have friends in the hospital, though, so those who are teaching her already know her and strengthen their bonds further as the game progresses. With the first game not available on Steam, it does not seem like you need to play it to understand what is happening in this one. As far as I could tell, the first game explained why Allison decided to get into the internship program, and established the relationships between the characters.

The gameplay of Heart’s Medicine drives the story. The best comparison I can make is to Diner Dash, as they both focus on your speed. As patients walk in, you need to work out where they need to go, correctly assign them, and wait till they tell you what else they need. Allison picks up the items you queue up and administers them to the patient as required. The items come in three categories: infinite; finite, but able to be restocked; and crafted, by combining other items.

As bonuses are based on how quick you are (quick assign, quick treatment, and treatment chain), this can easily throw you off. The treatments can require a touch input, like sliding down a slider; completion of a minigame, depending on the color of the quick treatment timer; or sometimes no input from you at all, but with varying time requirements. There is a lot of subconscious learning so that you can gauge Allison’s actions to get every quick treatment bonus. Once a treatment is done, the patient waits in line to get checked out, where you can get a maximum of five people waiting in order to get a ‘combo’. There are also two challenges on each level. The first is to find a guinea pig named Oliver whenever you hear a certain sound. The other is variable and displayed on the top right of the screen. This challenge can be story based or just something random that I can only imagine Allison doing as either a dare or to make her day more interesting. Many of these challenges are time based, such as having to clean something up or to use an item within seven seconds of grabbing it, while others are numbers based, such as getting 15 hearts in a certain minigame. You do not need to do these challenges as the story turns out the same, regardless, but they give points that may put you over the three-star mark.

I absolutely love the minigames. These provide another level of interactivity as you learn how to play them and try to find out how to take shortcuts. With only 10 shifts per department, not including the extras, you do learn fast as the games spread out giving them to you. As you move departments, the minigames change to reflect what each department does. So the Pharmacy has you finding the correct medicine box, while the Emergency Room has you stitching up a wound. And the sound design in these minigames makes them even better.

The point system is worth mentioning as well. With each star you reach, up to a maximum of three, you get 300 coins to spend on upgrades for the department. You do need to know that you will not get enough to buy everything before you leave. It is easy to spend coins on upgrades immediately, but replaying will make you more stingy. Trust me, you need to upgrade the last department. What stops someone from just sitting there the whole level? It so happens that they thought about this. It is hard to not get a single point. Even if you forgot that a patient wanted something or need to be checked out constantly, you will get points. Try and sit it out, and just get Oliver and maybe the challenge, and the game will know and make you retry it.

Want more challenges? You’re in luck, as there are specific challenge levels spread around, too. Most are just a harder challenge to do, but some bring in Emily, from another series named Delicious Emily, allowing you to serve food in the hospital canteen. This lets you gain diamonds so you can bring in items to decorate an area of the renovated hospital, receive the associated achievement. Doing everything initially took me 11 hours, with the main gameplay taking around 7-9 hours, so the challenges can bring more replayability. – Can be too repetitive

Heart’s Medicine – Time to Heal is a great casual game. The story provides the drama it promised while also including those heartbreaking moments that always hit you, even if you’ve seen them before. The visuals catch the eye, and are an easy way to pinpoint other games the same team has made. I would not have found Heart’s Medicine on the app store and I’m glad it made its way to Steam.