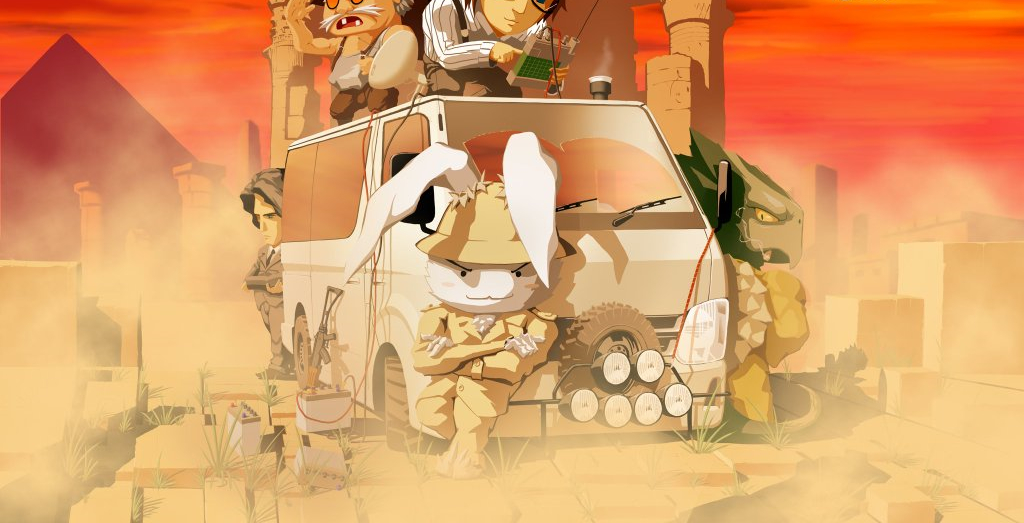 Pharaoh Rebirth+ is a side-scrolling adventure game in which you are playing as Dr. Jonathan Banfield, renowned treasure hunter and rabbit.

Pretty much you are in the role of the animal Tomb Raider/Indiana Jones. Dr. Banfield has something of both. The story starts when you find an ancient sarcophagus, which you didn’t want to open, but then Andre showed up. He’s an illegal “digger” and our fierce enemy. As soon as he came he opened the sarcophagus and both dr. Banfield and Andre got cursed. Now they need to find seven holy grails in next seven days if they don’t want to die.

I haven’t played a game in a long time where two, the most fierce enemies need to cooperate in order to stay alive. You will be playing as dr.Banfield most of the time and occasionally changing the character and playing with Andre (for now, only one stage), but that’s only because of the story. There are many side-scrolling “retro” games coming out each week, but this one caught my eye, because I in the gameplay videos I saw that rabbit can do some special attacks, jumping around, using items and everything. I thought to myself this should be at least a little bit different from other similar games, but in the end I must say I am disappointed. 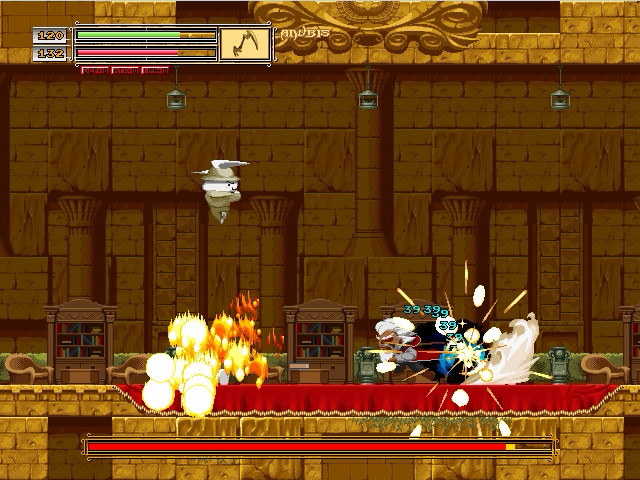 First of all, the story itself is good, I think it’s stupid to say the story is standard, because it’s very difficult to come up with the story that we haven’t seen before and I get the developers when they can’t write a better story, so people don’t judge the game by the story. Nevertheless, I didn’t choose the game because of its story, but because of the gameplay. In the videos and screenshots, the game looked good and fun, but when you play it for a few hours, you get disappointed. My first and main reason why I am disappointed is the repetitive and boring gameplay. Yeah, you will change the location, but in each level or stage, it’s ol’ same story. You enter the level, explore it, pick up hidden items, find secret rooms, fight the enemies and bosses and try to stay alive. The story is good, but the way the story is told and presented is bad, because a lot of times you will be interrupted by your assistant call. You can skip it, by holding the start button so the text go faster, but that’s not the solution. Almost for every item you pick, you will need to answer the call and read or fast forward the dialog, plus sometimes a third or even a fourth person joins the conversation and sometimes it just takes too long and it’s a waste of time. I know developers wanted to present the story better, but this is not the way. One thing more about the story is the further you go the story tries to be more serious, but when the main characters are animals, for me, the story can’t be serious. I mean, don’t get me wrong, I love animals, but when you are trying to make a serious scenes/serious story with animals, for example when Andre jump to take a bullet and saves us, it was meant to be serious, but animals killed “all the fun”. 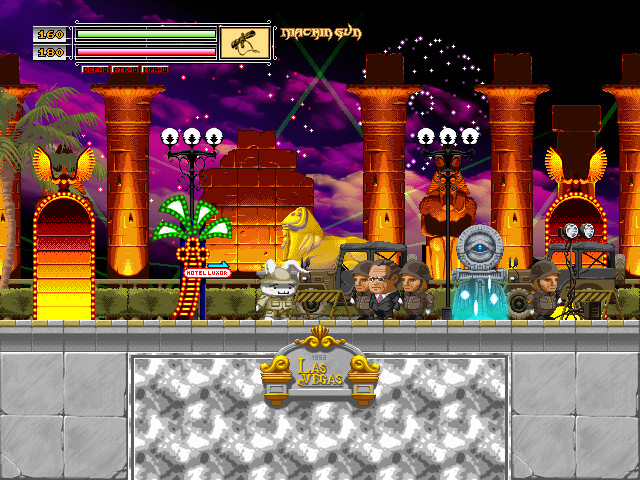 FIGHTING IS NOT BAD

The battle is actually fun and one of the positive things in this game. Your main weapon is ears. You have normal attacks, you can do jump-attack, you have sub-weapons and items to use, for example in one early level you will find a machine gun that shoots tennis balls. Also, you can collect carrot or any other food and when you are on low health you can eat it. The only problem with battle system is when you are fighting more enemies. Characters are very scripted (the animations are scripted, which means, you can’t interrupt them), so when you are attacking a one enemy and the other one comes from the other side, you will have hard time with turning around and hit that enemy from behind, but don’t worry, because this game uses the checkpoint system. The checkpoints are the statues that are scattered throughout the whole stage and when you come to that statue, you will recover the health and with pressing the up button, you will save the game/position. If you are a skilled gamer, then you will not die a lot, but if you are not so good with side-scrolling games, then my tip of the day is to save as much as you can. When you die and you didn’t save, you will start from the beginning of the stage and later in the game, that can be very frustrating. 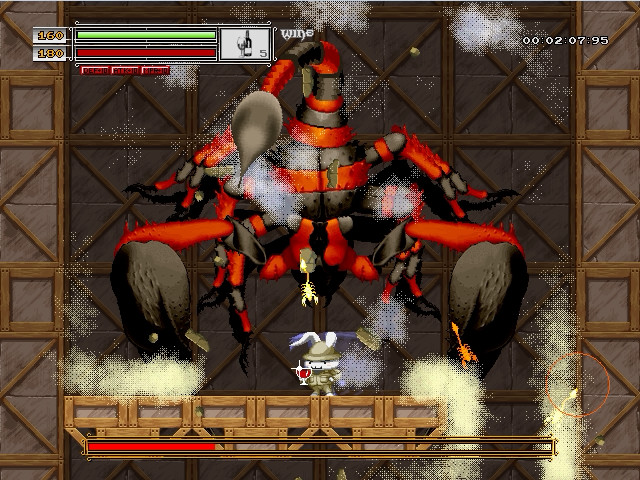 PICK UP EVERY ITEM!

Another good thing about this game and what would I like to see in games like this are the items. Items are divided in three categories: sub-weapons, main treasure and collection items. As I said before, sub-weapon is your secondary either weapon or useful item that will recover your health, energy or make you stronger for some time. Items in main treasure category can be either collected or made by using two or more collection items. For example, early in the game you will find the feather, ink pot and papyrus. When you combine those three items you will get the map. Whenever you are playing, you can double tap the up button or d-pad and the map will show up with you current location. It’s a simple map with no “legends” in it, it’s only for orientation purposes. That’s only one example of combining more items to get one useful, but you will mostly collect items in main treasure category individually. Sometimes you will need to find a hidden room, but sometimes they will be easy to pick up. 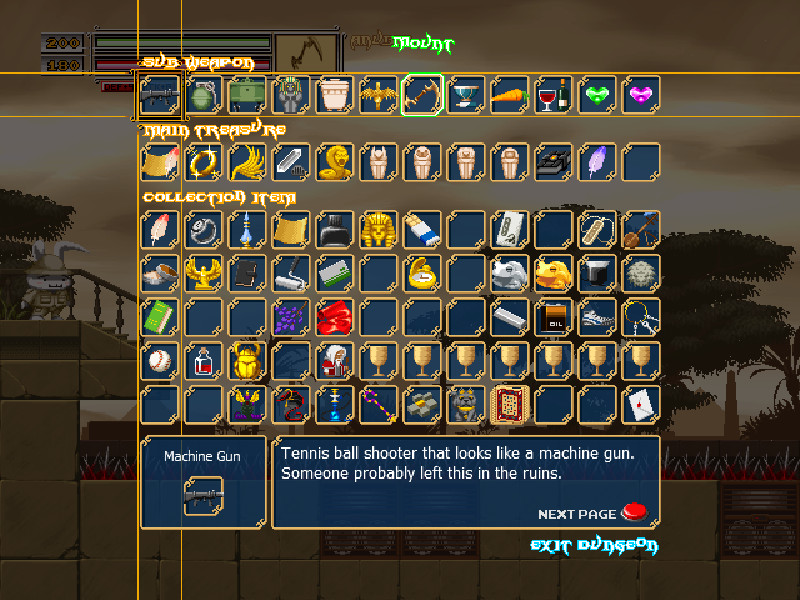 In last year or so, I must admit that developers lost their creativity. Creativity of the story, gameplay, music, graphics, atmosphere. In this game developers were lazy to make a better graphics. Someone will say it’s a retro graphics, pixel it can’t be beautiful, but au contraire. The locations that you will visit in this game are very similar, especially the colors. Stages aren’t so detailed, backgrounds are very simple. Music and sound effects are good, but the graphics ruins the atmosphere of the game while playing. For me that’s the lack of creativity. I don’t want to discourage developers, but next time, try to make a little bit better with graphics. Diversity is the key for almost each game, oh when I remember how many times did I used word diversity in reviews and previews, but none in this review, only in the end, but game isn’t so diverse or full with diversity.

I didn’t have any expectations for this game, but when I saw it I thought it could be fun game, but it end I am disappointed and I don’t have any motivation to finish this game. Too much same of everything, there are only couple of little different things, but other than that, everything is the same as in any other side-scrolling game. If you are a side-scrolling game, then you should get this game and you will have fun, but for people like me that don’t give a **** about genre of the game, well, it’s not so fun and you should probably wait for some discount to buy this game, because €10 is a bit too much in my opinion. Short: fans of side-scrolling games should buy and others, wait for the discount and try it. This is not game for everyone,