No time to procrastinate. You’ve got things to do!

In my youth, I hated cooking. My father did his best to get me to help him in the kitchen, though my flighty attention span and high energy made it difficult to focus on any one task he delegated me. Cooking was boring, and there were many books to read, games to play, and things to do. As I got older, however, I began to enjoy cooking- and I also began to mesh old hobbies with the one my father wanted me to have. I enjoy reading cooking books and recipe books, and I love any time a game has cooking or crafting elements. Plenty of life simulation aspects in games intrigue me, and it’s what drew me to Epic Chef initially. I’ve played other games from the Team 17 publisher before, namely Overcooked and My Time At Portia.

This game includes enjoyable elements from both of these games, all while setting itself apart from them.

Our hero and player controlled character is named Zest. He’s a blonde, blockily handsome bloke we’re introduced to on a pirate ship, and nobody there seems to like him. He’s a stowaway, saving the crew’s lives only from a problem he caused initially and still claiming full credit. What I’m trying to say is, Zest is sort of a jerk, but at least in a mostly harmless way on-screen. 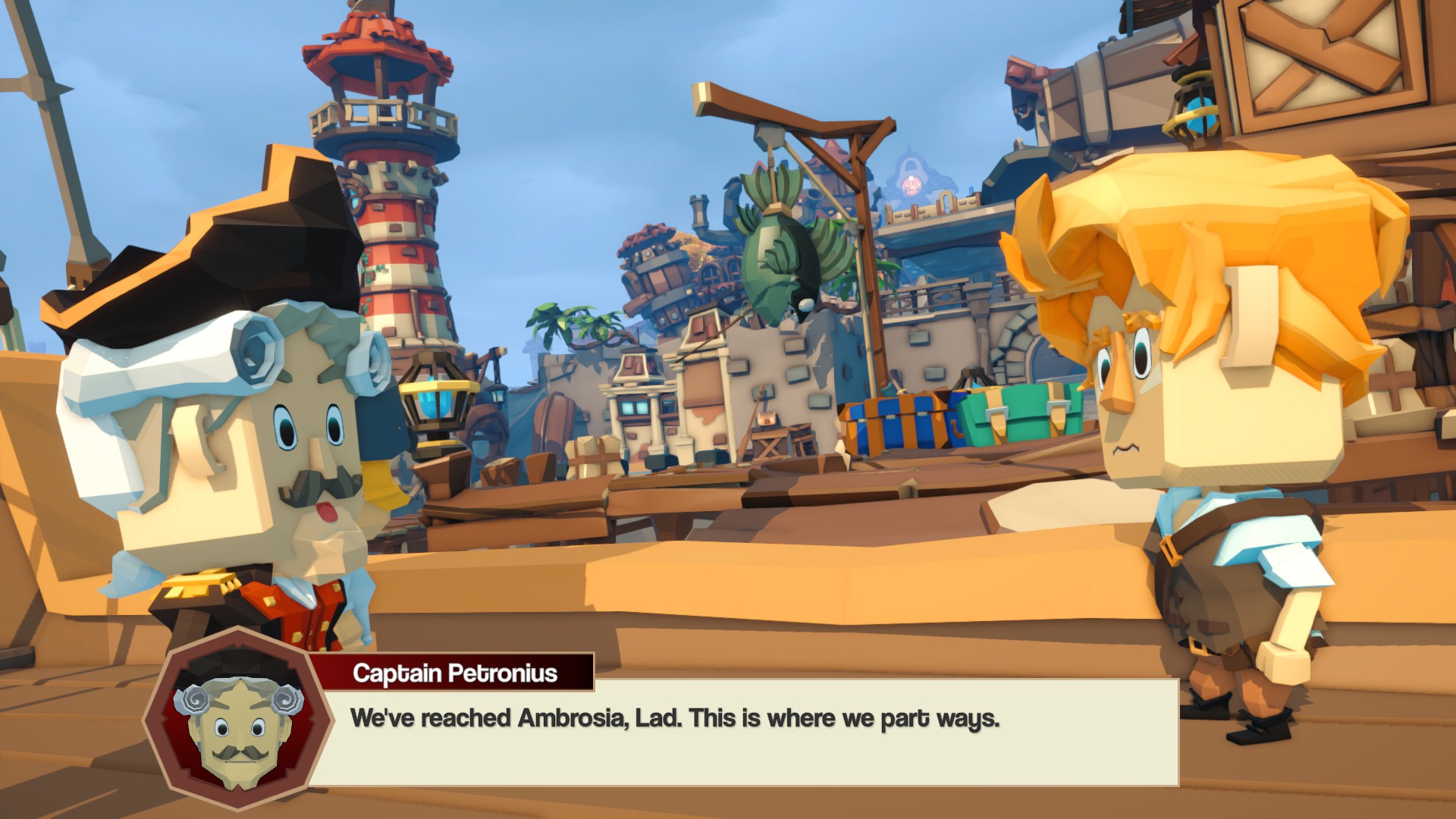 Zest’s main motivation, we learn, is to come to Ambrosia because we acquired property there. The place is called Villa Calamitozza, and the name itself is met with shock. That location is allegedly haunted, driving previous tenants away with the screams of the damned. Zest, of course, doesn’t care. It’s his new home, and he steps around Ambrosia taking in brawling chefs on his way to survey the place. Any trouble or hassle caused by ghosts or the like is worth it to him- the Villa is MASSIVE. Zest now owns a huge plot of land, some weird portal, a lovely view of the ocean, and a magical golem that makes itself known the following day.

Things continue to be quite strange from there. Zest proves himself capable of adapting to basically any scenario with a shrug or a brush of his shoulders, including zany magic, hatching a bird mount to ride around, and skilled chefs trying to duel him in junkyards in a grift. He takes it all in stride, and with a wit and lightheartedness that the entire game is written with.

Did I mention Jesus is in this game? Jesus is a carpenter in this game. He gives Zest his first real bed…and a whole lot of grace as well. That’s really the humour the game approaches narrative and writing progression with, and this didn’t wear on me too badly for the most part, even in sequences when it really felt like they were reaching or had some sort of joke-quota to fill. 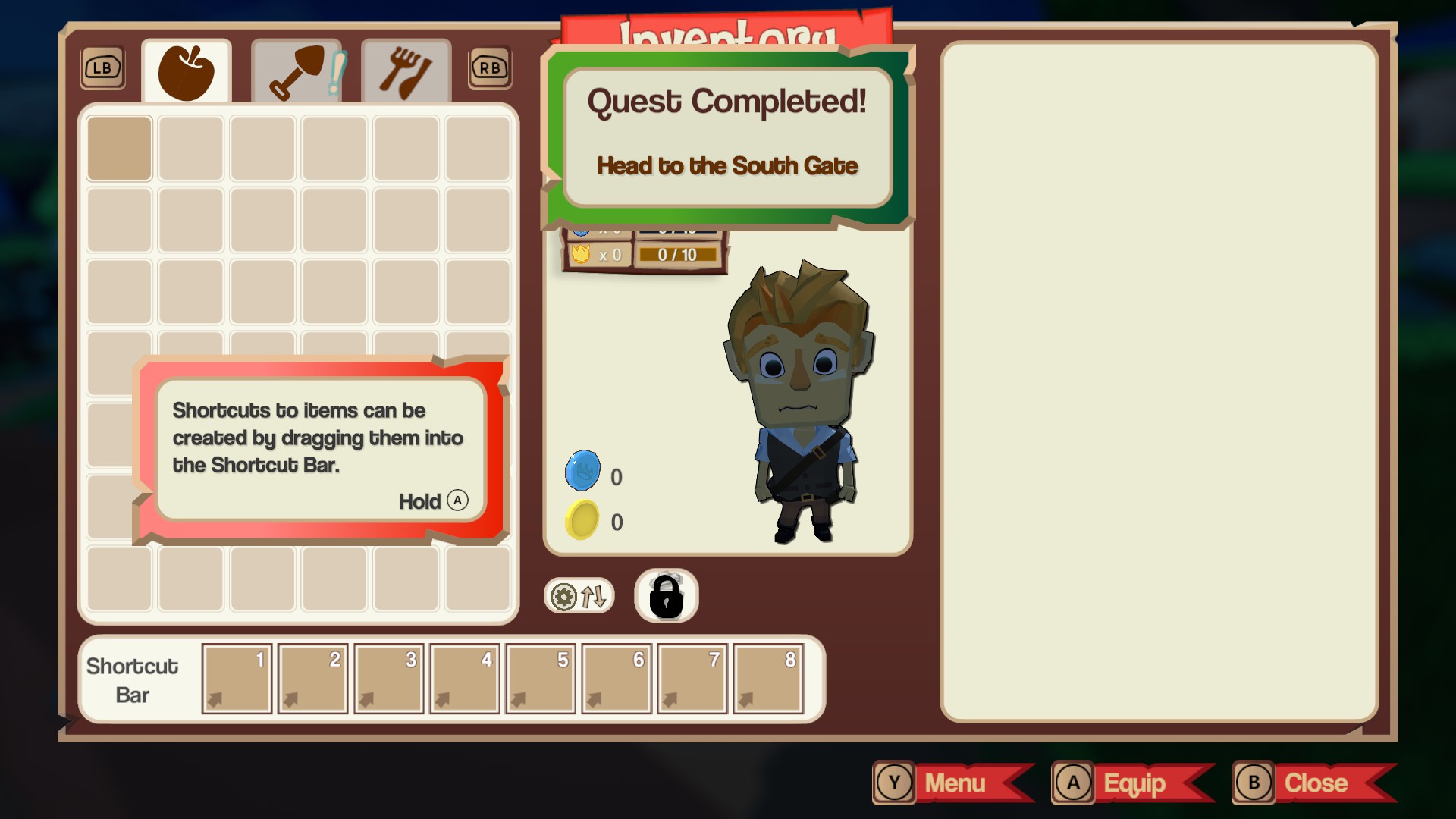 Frankly, this is the weakest part of the game for me. The good of the graphics include the layouts. There’s thought put into the city, the stores, the people walking about- but I greatly dislike the appearance of the actual character models. Everyone is blocky, and there are certain features added onto people’s blocky exteriors to define them. Women are subjected to odd, dome shaped appendages on their chests, the cat girls have silly ears, and hair as well is often angled and sharp. It’s reminiscent of old school Gameboy graphics, but with less of the charm. Still, the bright colours are nice, and I enjoy the way the plants and various equipment and furniture look, even if the character models fall short for me.

Epic Chef is part life/farming sim, part cooking sim. It’s a good thing to add additional game functionality besides just cooking to a game called Epic Chef, for variety and a larger semblance of control. The fact that I have my own farm that grows my own ingredients adds an additional level of immersion- even if they do grow at least ten times as quickly as in real life. 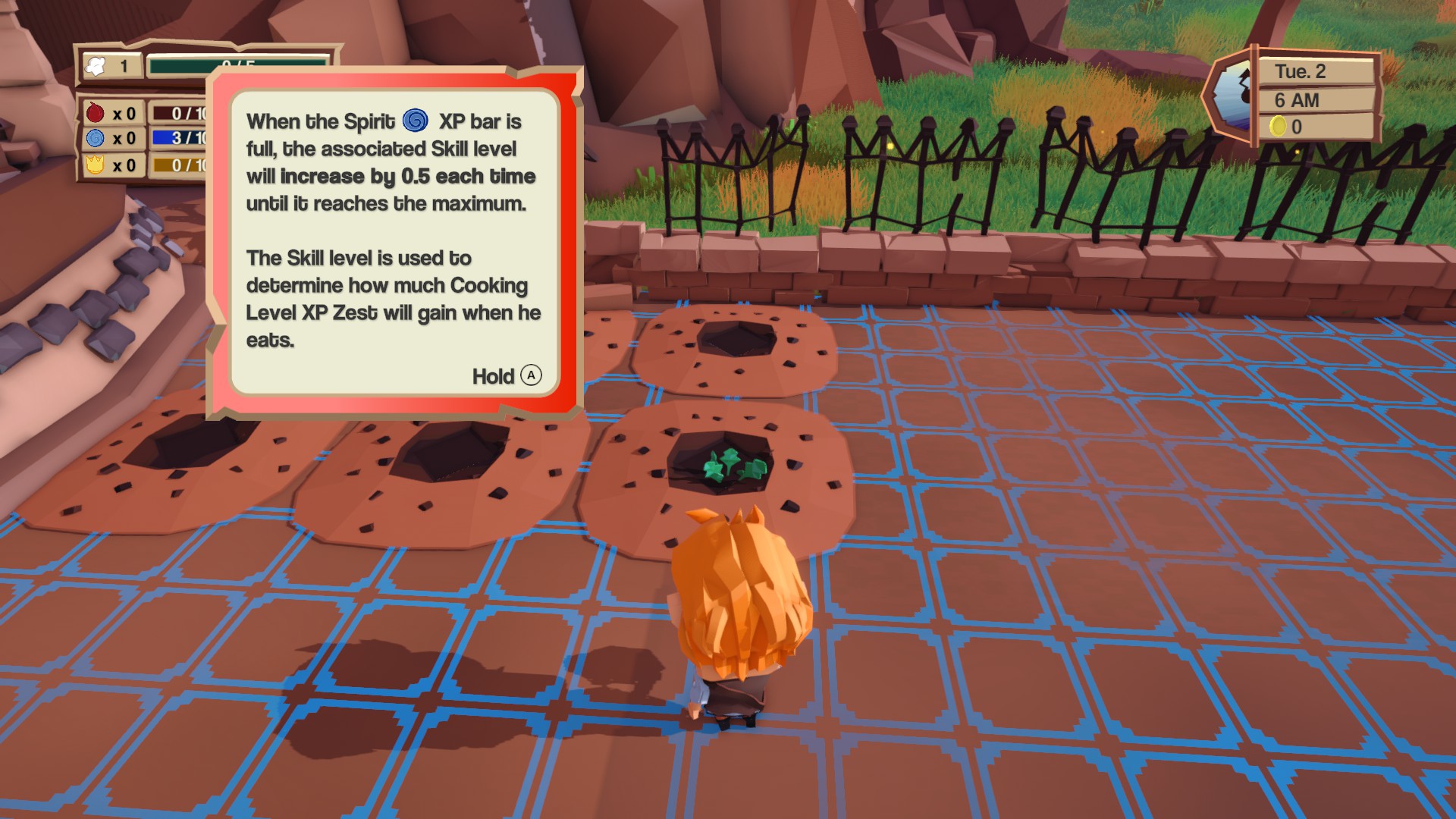 The plot of land Zest acquired has a lot of space, and the golem that appears quickly instructs him that there’s magicka concentration very high in the surrounding soil. This boosts plant growth by 500000%, which means that I can plant seeds in the morning and have something harvested by the evening. The planting system is also nice- it puts the ground into a grid, helping you decide where to place not only seeds, but also other equipment built. The following day, I could harvest from the same plants almost three times if I schedule things right. That’s the beauty of Epic Chef as well- seeds aren’t a one-time harvest. Even carrots let me harvest from them ten times before I have to buy new ones, which really helps me feel like I’m not wasting my funds. In fact, things often grew so quickly that my storage- that you can build with wood along with other helpful items- was often full, leading me to wait to harvest things. That can be done without a tool, though the game also provides you with an axe, a hoe, a hammer, and more to get things going on your farm. 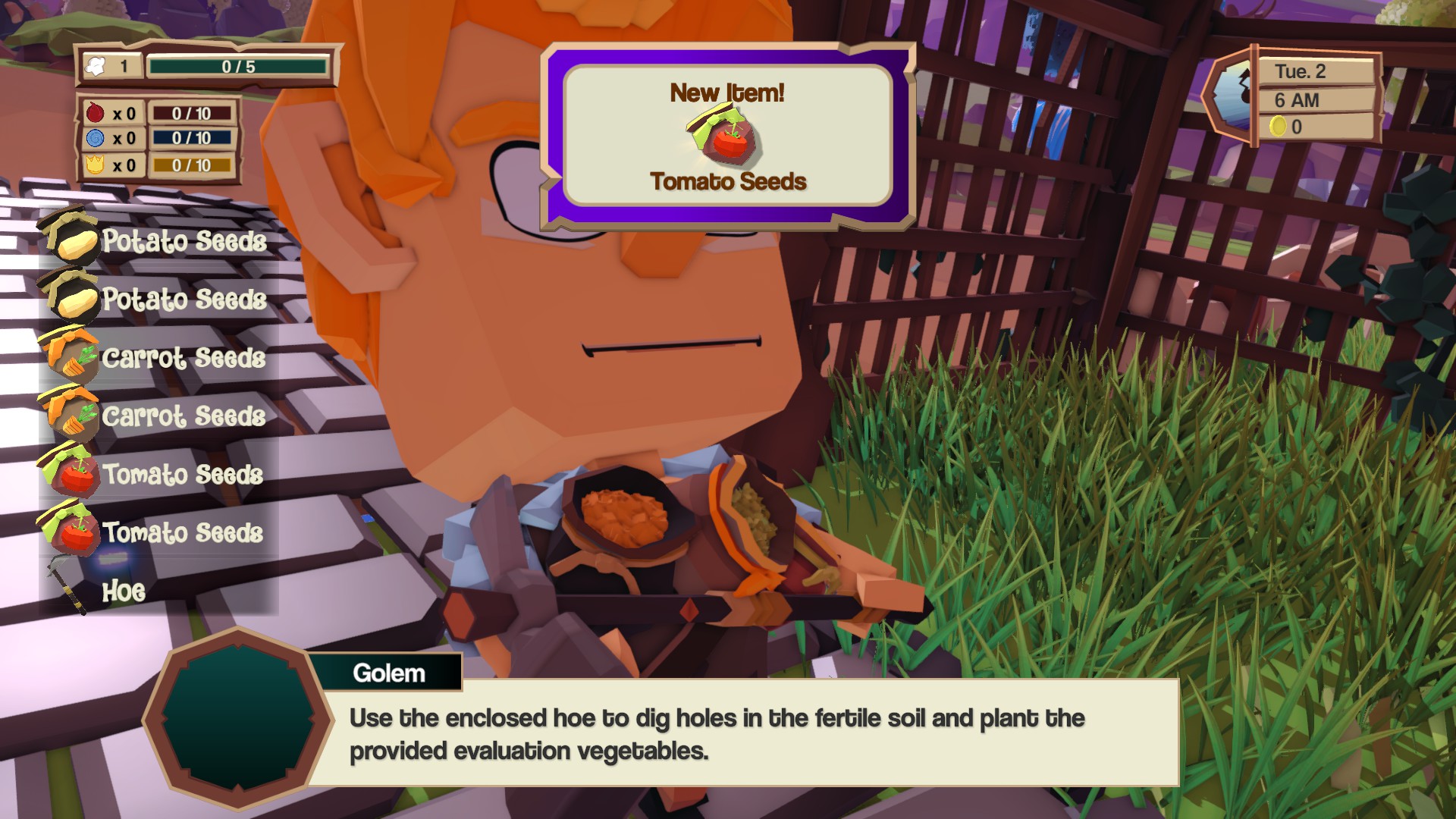 Quests are also a key part of this game from the second you begin playing. Sometimes, that’s as easy as going to a place to talk to a person. Other times, certain ingredients will need to be grown and sold in bulk. Then, of course, you get your cooking quests. There’s always something to do in Epic Chef, from things to remember, to main quests, to acquiring pocket change.

When it comes to cooking, things get just a touch more complicated, though in a way that makes things much more fun. Each ingredient (like a tomato), has a set of properties associated with it, like a green vegetable symbol and a brown land symbol. This can boost other ingredients that get added to a dish later, depending on synergies that each ingredient has. As Zest levels up, those become clear, and can help boost the score of his dish. That’s right, every dish is scored, and has three required ingredients: vigor, spirit, and sophistication. These are also the three skills Zest can level up as he goes about his daily life, and every single dish component increases these three things. When an item gets added to a dish, stirring adds the scores from the vigor, spirit, or sophistication score the ingredient has. If you don’t stir, the dish might burn, losing you points. Stirring too much might get you a low aroma score though, as aroma needs you to stir just before those vigor, spirit, and sophistication symbols disappear from the pan. The aroma score tells the judge of your chef battle which dish to eat first, something that becomes important once sauces come into place.

That’s right, this cooking game has sauces as a key variable for winning competitions. 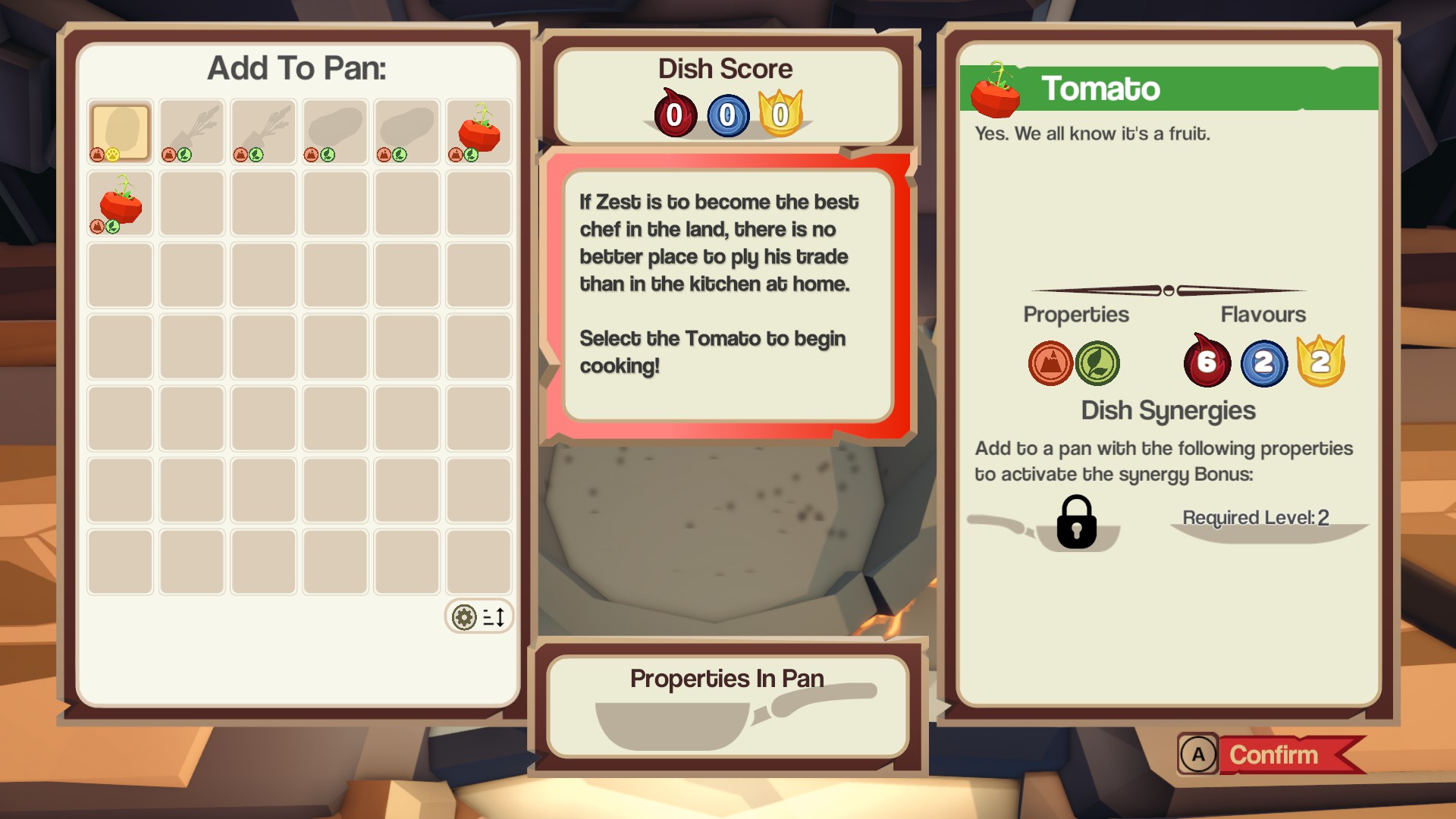 Sauces introduce key shifts to dishes. One of the first sauces you may run across makes it so that the spirit score in the following dish will yield negative points for the chef eating it. This means you want to go first, so your aroma score needs to be high to properly sabotage your opponent’s dish when the judge eats it next. While all of this sounds like a lot, the game does a great job of explaining how it all works, and giving you time to practice. If you fail a chef battle, often the only cost is losing whatever ingredients you use, meaning if you can grow more, you can try more. Dishes also vary depending on what ingredients are added and how well you score. 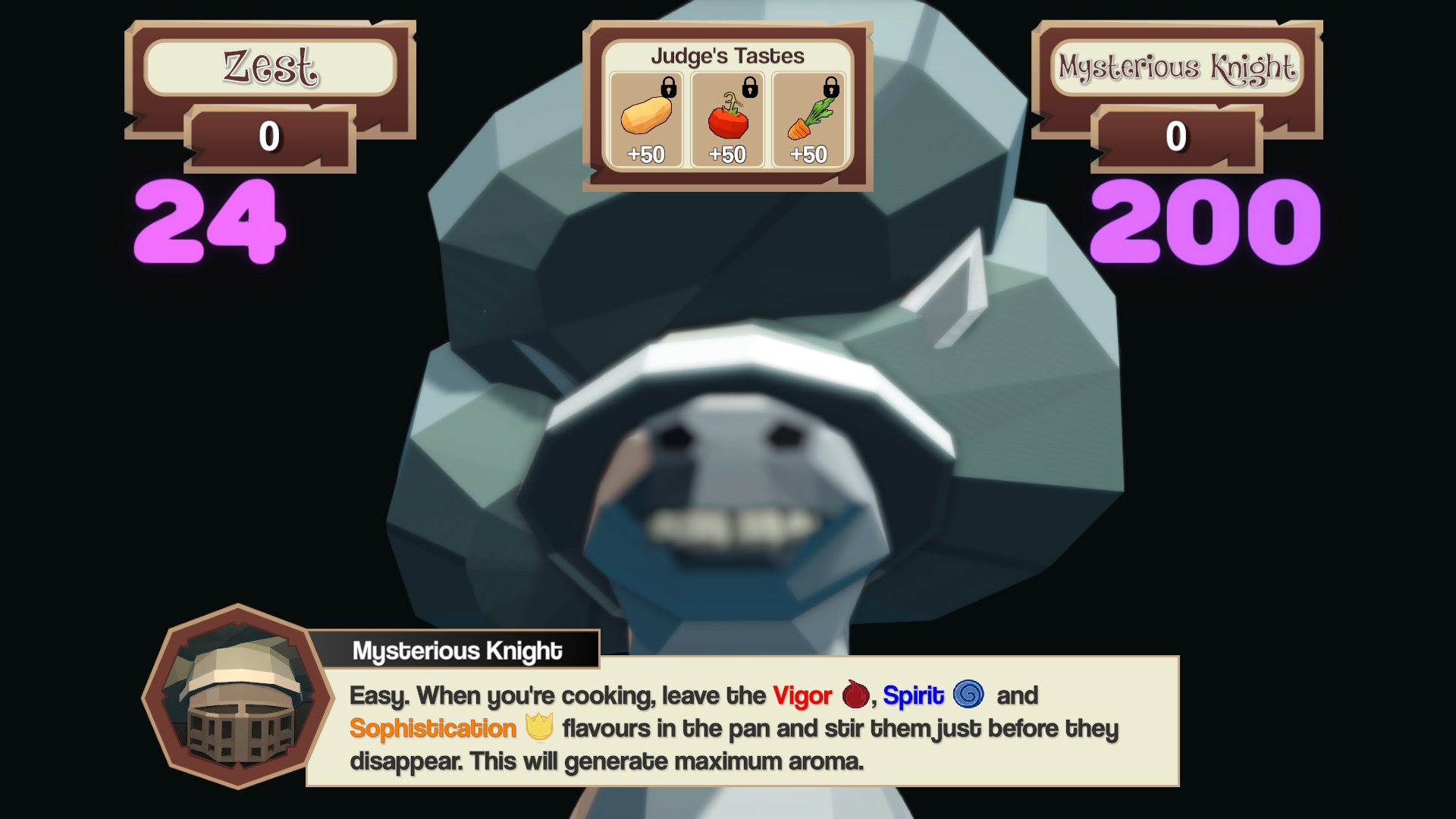 Earlier, I mentioned Zest’s ability to level up. This is done naturally as Zest goes about his daily life. Chopping down trees for wood will increase his vigor, talking to some nice old people will increase his spirit, and sitting out in the sun will increase his sophistication. That shows in a bar in the upper left, and each time the bar fills, .5 gets added to the total. When Zest eats, the skill modifiers (vigor, spirit, and sophistication), get multiplied. If Zest makes a 5 vigor score dish, then eats with his vigor bar at a 1 times multiplier…then he gets that same amount of exp. After that, the bar rests, and Zest needs to complete more activities before he can level up again. 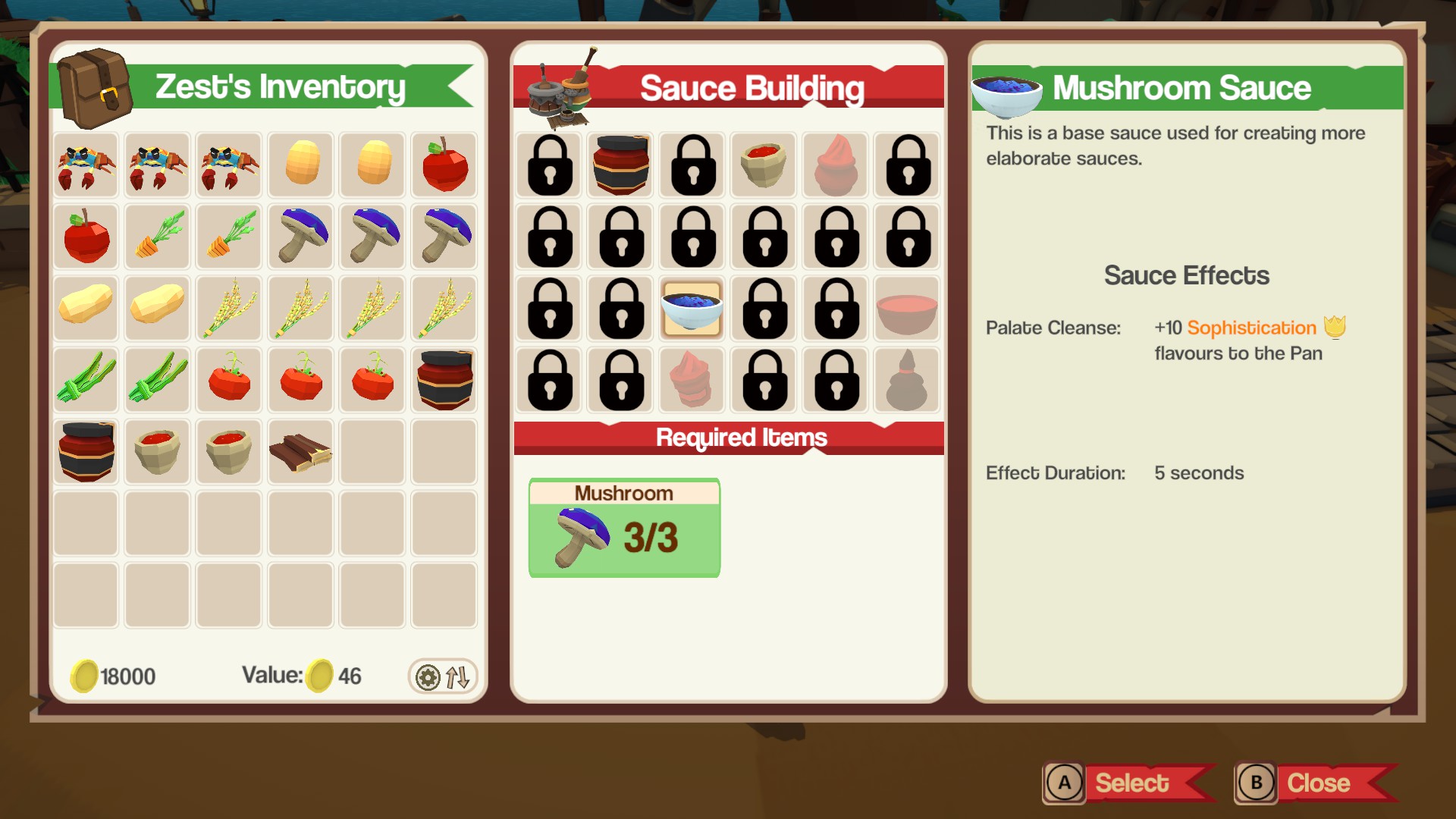 There’s enough to do in this game without it feeling totally unwieldy, and while I had a few complaints- namely movement speed and unskippable intros during chef duels that felt like they wasted time if I lost- the game is still overall quite fun. It’s clearly a labour of love…much like real cooking.

If you enjoy cooking games, Epic Chef may be for you. If you like farming sims, then Epic Chef may be for you- though the farming aspects are certainly a touch less in-depth than the cooking components. So long as you don’t mind a humorous atmosphere and near constant witty banter, the game won’t wear on you and will prove an enjoyable experience.