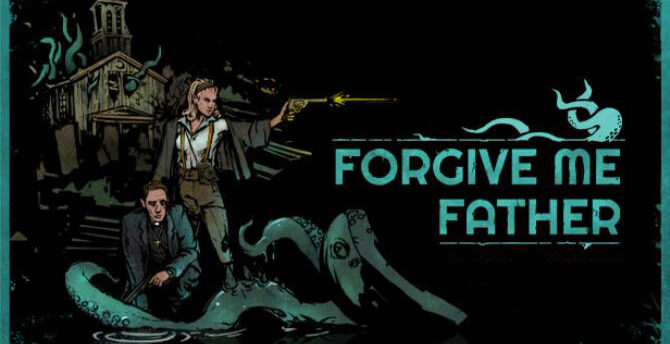 …for shooting you in the tentacles.

Neo retro shooters are back with a vengeance, but Forgive Me Father opts out of chunky pixels in favor of sprites with a comic book style. The theme, however, is as dark as ever: 1920s Lovecraft. Let’s see whether this Early Access title is worth checking out!

Like XIII or Fallen Aces, Forgive Me Father looks like it was pulled straight out of the pages of a graphic novel. Here, the enemies are 2D sprites hand-drawn with love and care, and they can brag to belong in a Lovecraftian bestiary. However, they are constantly forward-facing to the player, without any animation for walking left or right, which does seem uncannily flat and at odds with the 3D environments. Except for the first level that is very flat inside apartment buildings, most levels include some welcome verticality. But from afar, the textures of concrete and the heavy usage of post-processing do not seem like they belong to the same universe that spawned the hand-drawn sprites. Still, it is not as bad as I make it sound to be, and some areas such as the gardens or hedges look fantastic with the rich details in the form of gorgeous grass, trees, and ivy. And the dark, dimly lit areas with weird sounds from some enemy types (the Patients!) show that the game can earn its horror stripes in the graphics department. 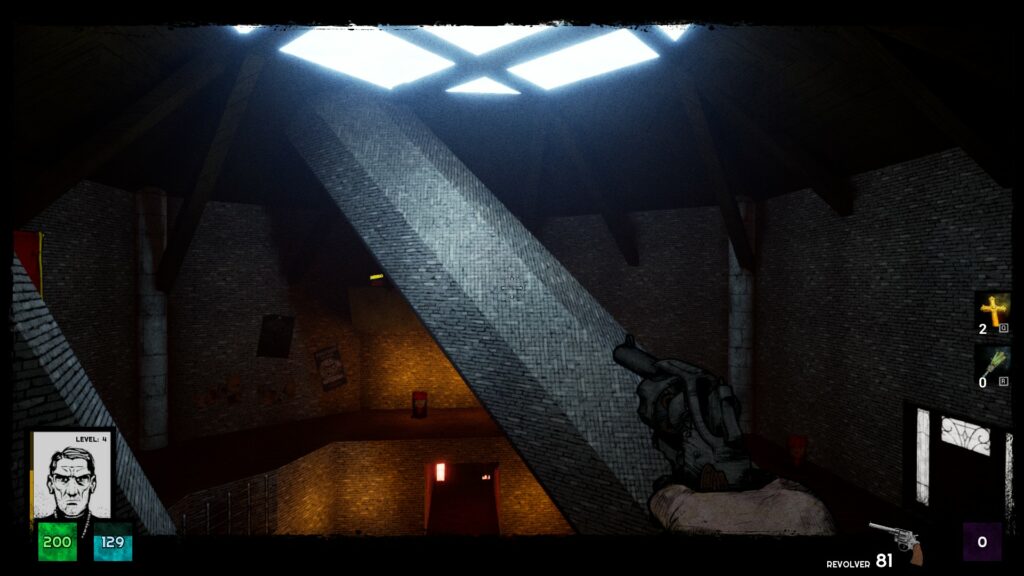 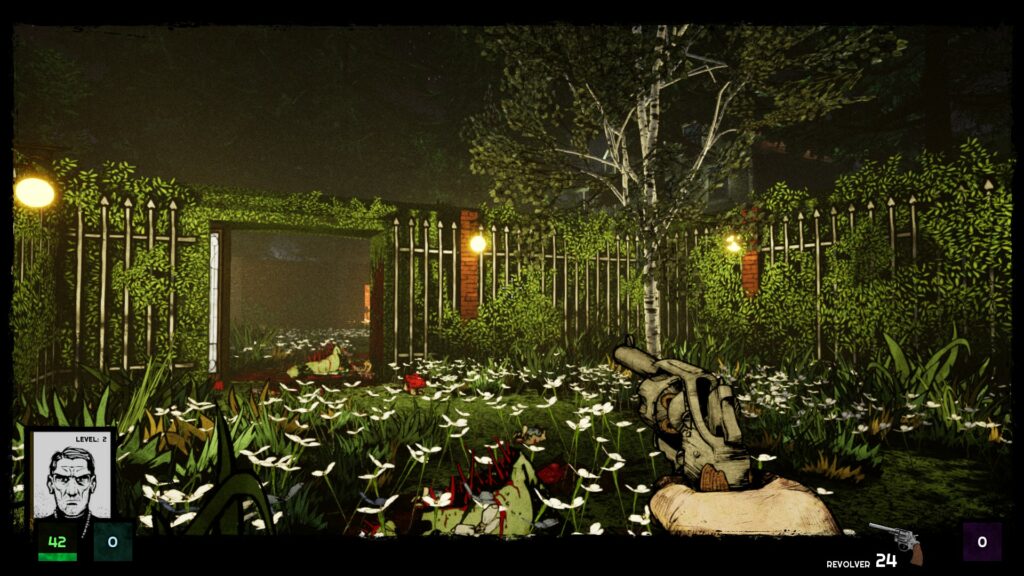 At first, I was afraid that I was in front of a Wolfenstein3D-type layout: the levels start in a fairly linear fashion, before gradually adding verticality and forks. Still, they are rarely complicated like the abstract mazes of old. Instead, the story takes us to different areas and the levels are each completely unique. There are corridors leading to arenas, and sometimes the levels loop back to an earlier sequence to unlock a colored door. The changes in environments are where I found most of my motivation to progress, as there are many interesting places to visit.
Most levels take roughly 10 to 30 minutes to complete, with one or more checkpoints. As of now, the game features about a dozen levels, with more to come. 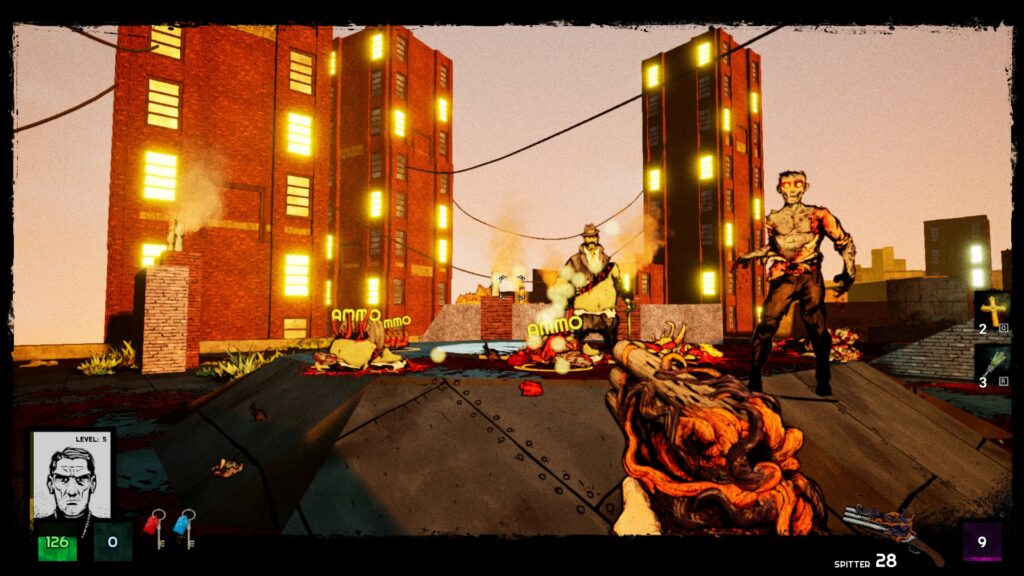 The part of the game that disappointed me the most was its combat system. To remind its players that the game takes place in the 1920s, the weapons have crazy recoil, while headshots are almost a necessity. This means that revolvers and machineguns alike are played as if it was a precision shooter, whereas the enemies are as fast and deadly as in old-school games. You can quickly get overwhelmed by a bunch of Zombies beelining for you and then spreading around you, with their collision preventing you from moving at all. There is a skill tree to upgrade the weapons (most upgrades are stats boosts, minus some significant changes such as a machinegun that can be transformed into a grenade launcher), but overall, there is no need to switch weapons depending on the enemy types: it’s mostly about whether you can pull off headshots, and then there is the shotgun when long-range diplomacy failed and they try to smooch you from up close. The player’s movements are on the slow side, so not very interesting, and going back to a checkpoint to do a sequence again feels repetitive. I felt like I was subsequently getting better results by learning where the enemy ambushes were, rather than because I was becoming more skillful. The enemies themselves are split between various melee and ranged combatants, and flying monsters are sorely missing. The Zombies carrying a second head to replace the first in case of headshot are a stroke of genius. Finally, there are lots of nifty abilities to collect, such as a cross for healing, holy water to stagger enemies, and so on. All of these abilities are fueled by the madness meter, which is a positive attribute, for once! 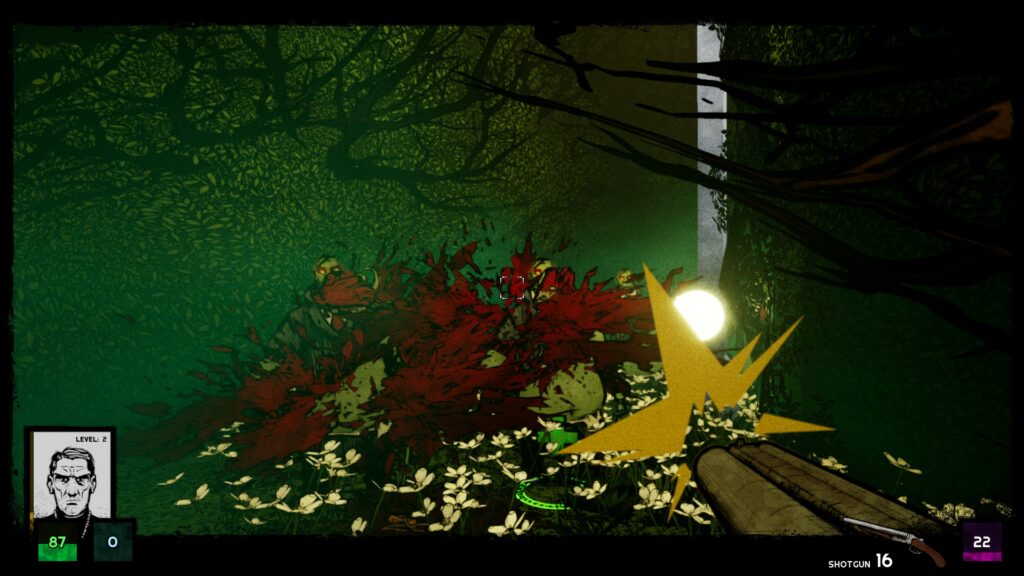 Changing weapons with the mouse wheel has “up” for “previous weapon”, and it’s not possible to rebind this particular action although other functions are there for you to modify. If you care about your stats at the end of a level, you will have to open again all interactable letters and story elements after you die at a checkpoint, which is mildly annoying. Health dropped by enemies disappears way too quickly. During some arena fights, the game blasts some metal, which is at odds with the 1920s theme, and sometimes the screen turns black & white, which prevents from enjoying the comics-style graphics. 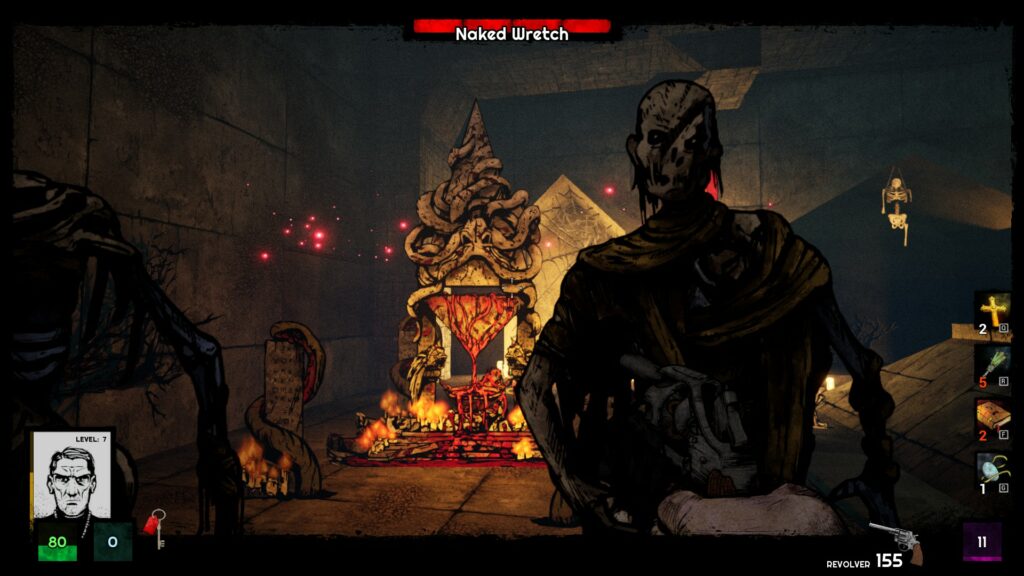 Forgive Me Father is at its best when it leans into atmospheric environments and hand-drawn horror, but it often seems at odds with itself. The 2D and 3D elements do not always mix well, and the shooting doesn’t know if it wants to be more like a slow survival horror game or more like an action-packed retro shooter. This game had a lot of ideas and potential, but it needs to pick a side and stick with it rather than trying to do everything. Still, if you can forgive the imperfections, this game has a unique atmosphere with its striking art style and varied environments.