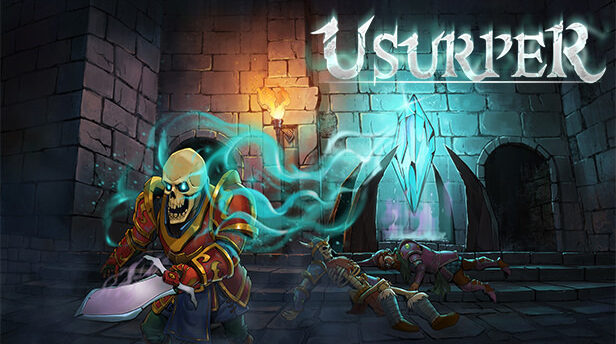 A dark, gritty souls-like game where we can possess the bodies of enemies.

‘Usurper: Soulbound’ is a souls-like action RPG dungeon crawler taking place in a parallel dimension akin to purgatory. Our character, whilst looking for treasure in a dungeon, has his soul transported to this dark realm, and in order to get out of there, he has to fight his way through dungeons filled with undead. It is currently in the early access. 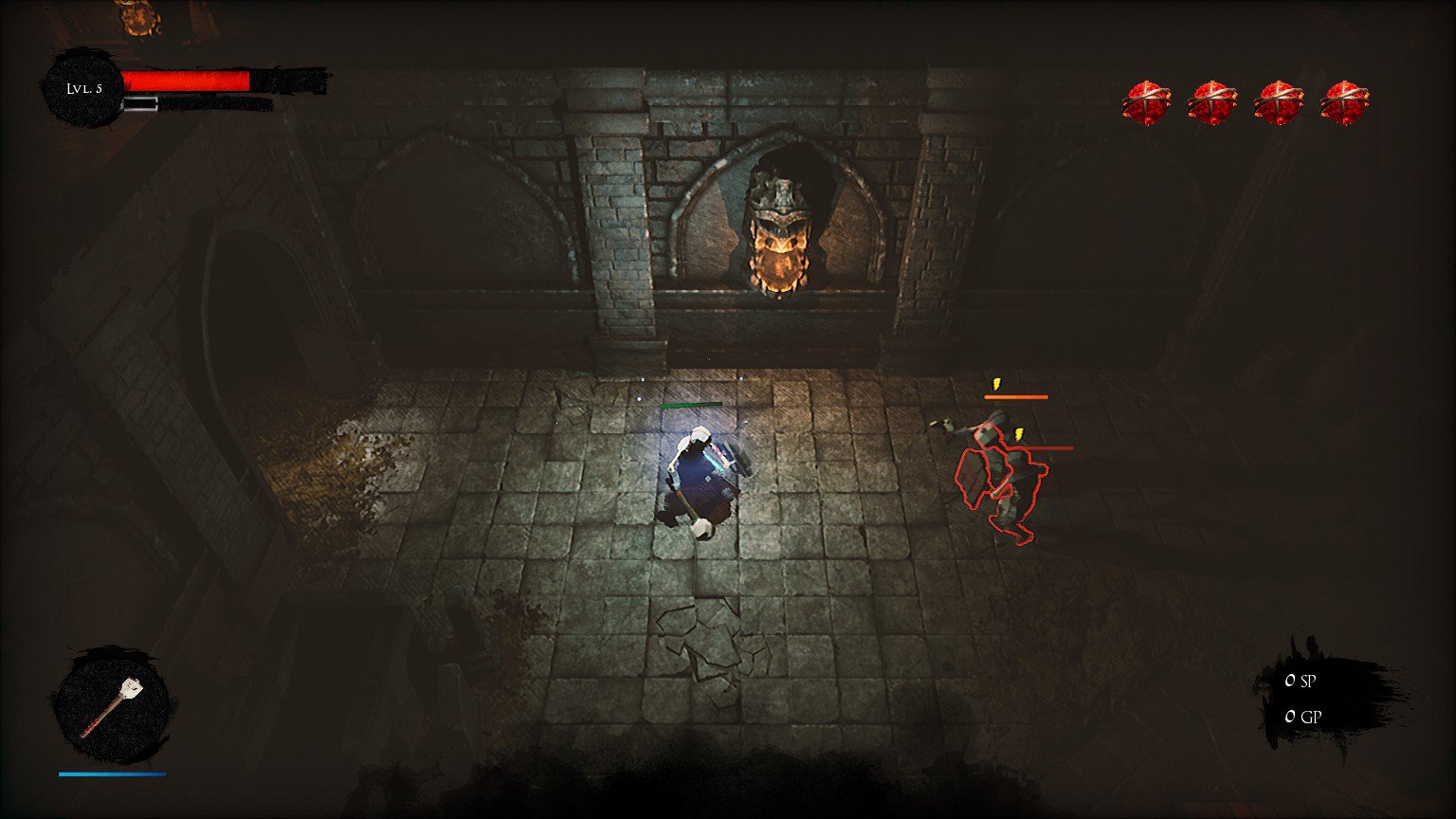 The focus of the gameplay in on exploring dungeons and engaging in fights with enemies. The combat has been heavily inspired by Dark Souls, where timing, stamina, and positioning on the battlefield are of utmost importance. The strikes we do on the enemies and vice versa are heavy and realistic. So, timing our attacks wrong or getting cornered could get us hit by the enemies or even killed in seconds. We can also block and dodge enemy attacks too and use spells to help us out during tough moments. Although I personally found the use of shields to block to be way underpowered at the moment, as the stamina loss from that usually leaves you open for the next attack.

The main premise and the most unique aspect of the combat in ‘Usurper’ is the usurp ability. As we are a wandering spirit in these dark halls, we can possess the bodies of the undead and fight our way through using a new body, as our naked spirit alone is way too vulnerable and limited in abilities. In order to possess an enemy’s body, we have to first lower their health till they’re close to getting killed, and then, if we have sufficient mana available, we can take over their body. 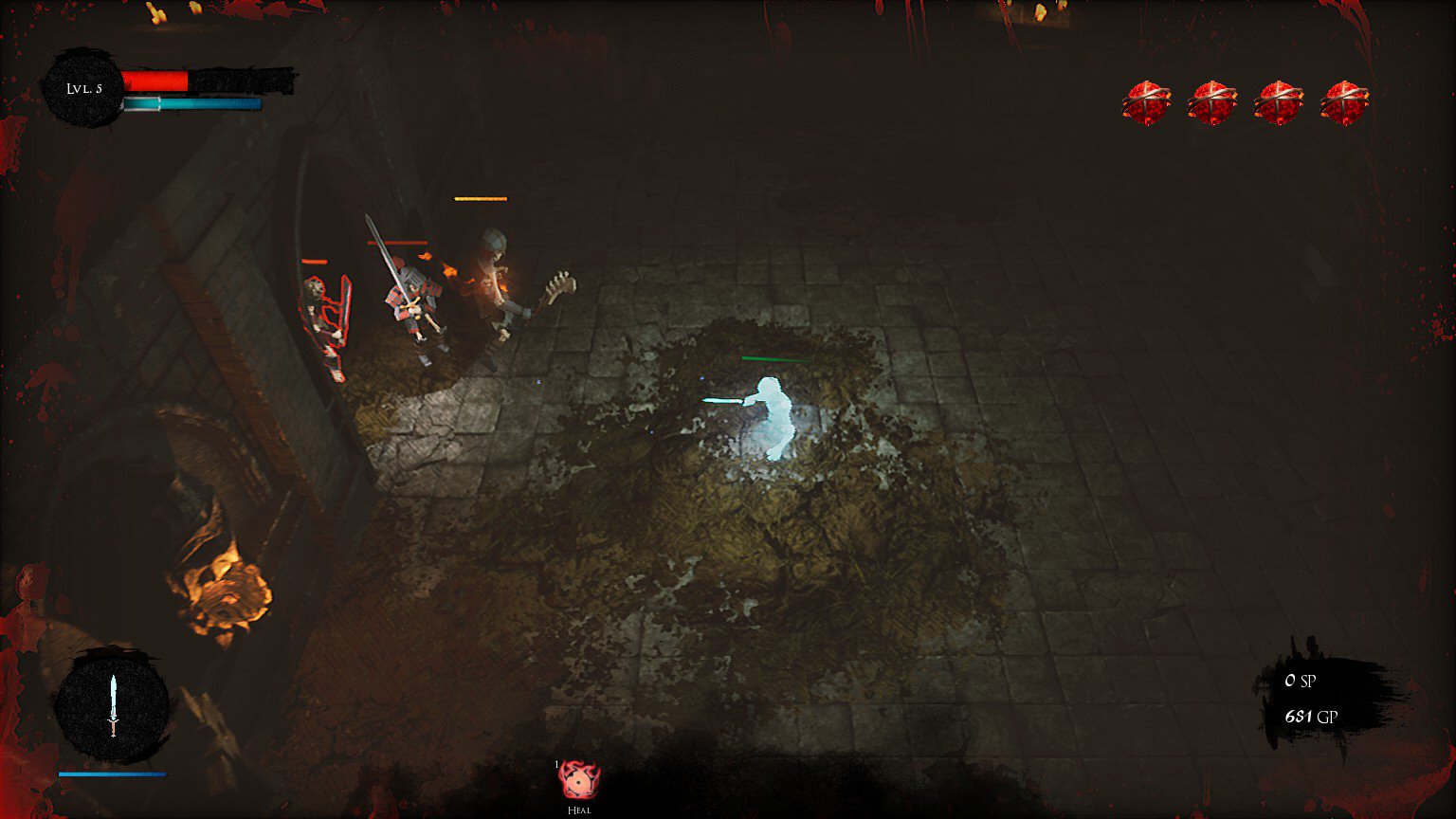 This provides some interesting tactics. Not only does it let us adapt to the challenges ahead by picking a suitable body to fight in, but also, it provides us with potentially unlimited health bars. So, if our current body is getting low on health, or if it’s been destroyed and we’re a wandering spirit again, we can possess another body, with all HP intact, so long as we have enough mana that is.

Enemies come in different types, and after having possessed an enemy of a certain type once, we unlock it at the vendor, and can start the dungeon in that body if we have enough money to afford it.

At times we come across treasure chests in the dungeons, which may have something useful inside, or could end up being a trap and explode. The weapons we find in the dungeons are fairly different to each other. Axes and maces for example deal more damage and have a longer reach than daggers and blades. But when we get to the second floor of the dungeon, we also get access to mage staffs and two-handed swords. Weapons all have limited durability, however, and will go out of use very quickly, so at times we have to keep a good weapon unused while fighting trash mobs and pull out the big boys when facing someone more challenging. 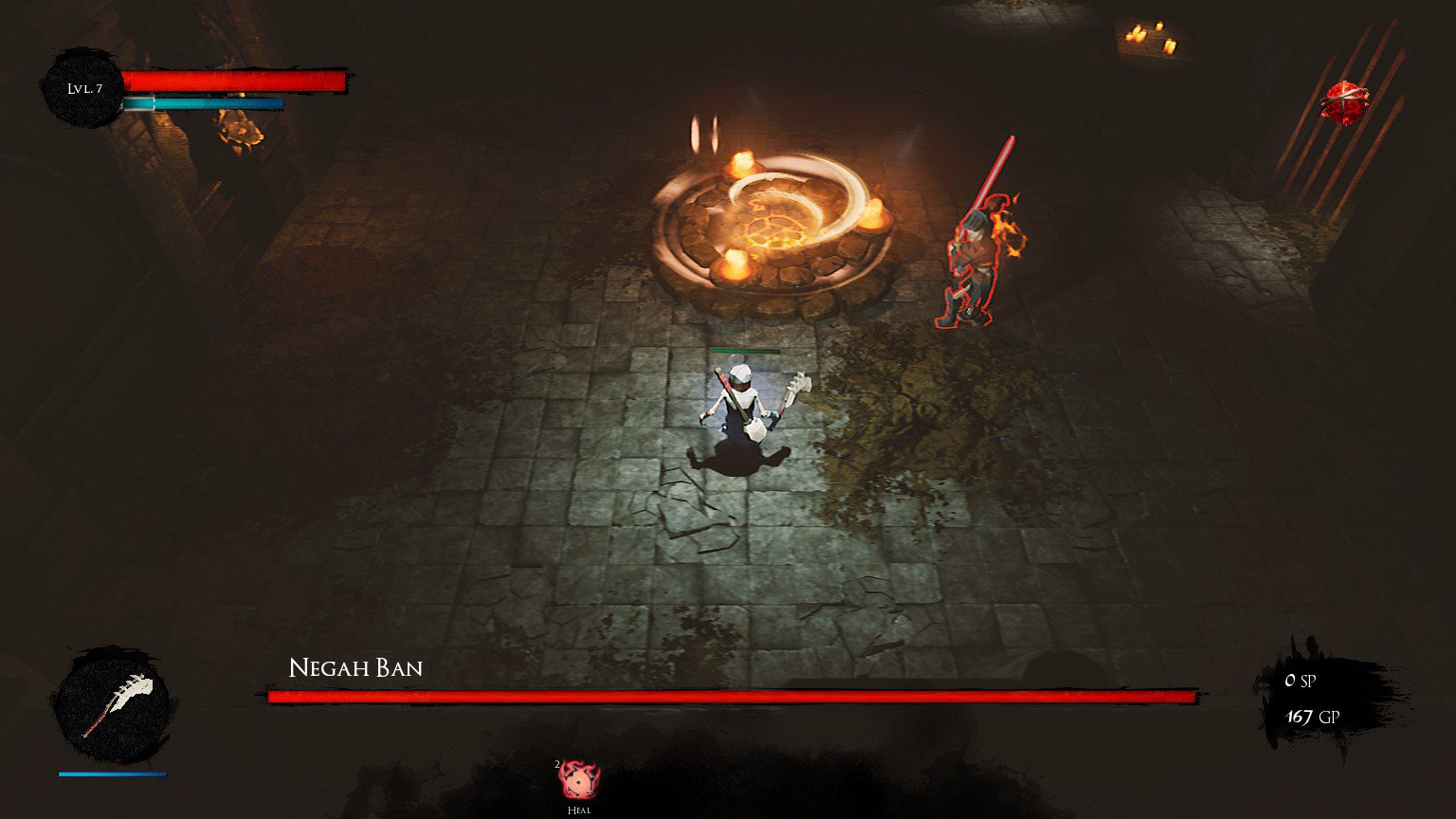 The gameplay loop most closely resembles a standard roguelike dungeon crawler. We go through a portal into a dungeon with some randomized elements (such as the type of enemy at each position), and we have to defeat the boss in that dungeon. However, the boss room can only be accessed at a certain character level, which means we have to possess an enemy that’s got high enough of a level (or start the dungeon with one such body). In addition to that, there are some rooms, guarded by minibosses, which have shrines. When we interact with those, we unlock a skill point, which we can use to make one of our stats stronger. And if we die at any point, we get transported back to the start and repeat the dungeon run. 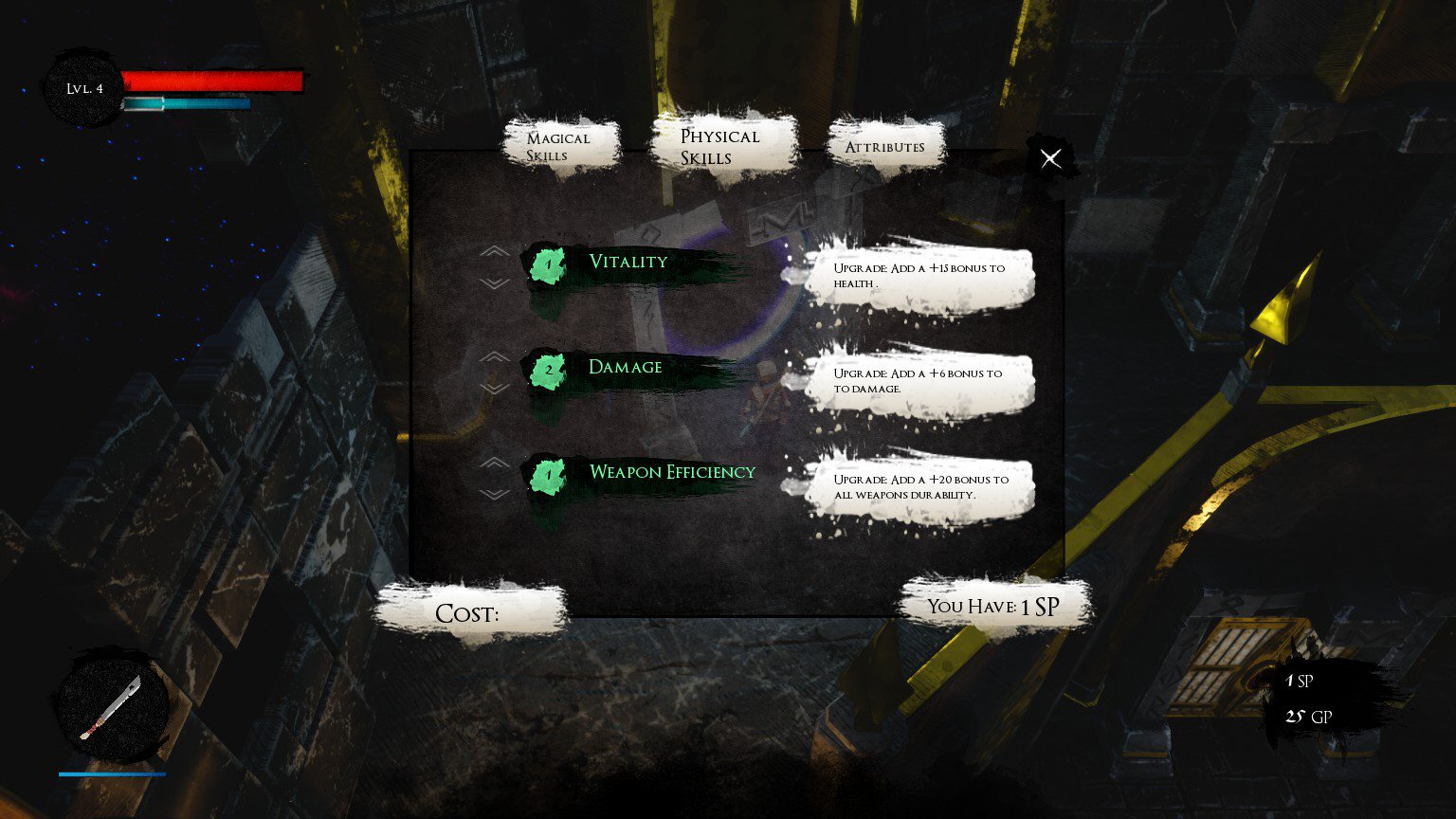 Depending on how many enemies we defeated in the previous run, we’ll have a certain amount of gold available to spend on bodies, weapons, and scrolls for the current run. Unfortunately the gold cannot be carried over beyond that. Once we start a new dungeon run, all of our unspent gold is gone! There are pluses and minuses to this feature. On the one hand it doesn’t let players hoard gold and buy a lot of good stuff at once to make challenge trivial. But on the other hand, if you bought a lot of good stuff and then got really unlucky at the start of a dungeon run and died early, then all the stuff you bought went for waste and you must start the next run with nothing left over from the last one and too little gold to afford much new stuff. This then encourages grinding for gold, which I was not fond of. The overall gameplay loop, although fun, felt a bit too repetitive for me, as I simply rinsed and repeated the same things in each run.

As far as the challenge level itself, it’s hard but fair and provides plenty of room to learn and improve your approach. You get to learn enemy behaviours and also get a better idea of which approaches are effective against each enemy type. A lot of the time you’ll find yourself outnumbered and have to really wait for the right moment to strike so not to get hit back by a neighbouring enemy. And such encounters are good at keeping us on our toes. The only aspect so far that caused me a fair bit of annoyance in combat is how some enemies (usually bosses and minibosses) can end up having a very big range advantage over you whilst maintaining almost the same striking speed. This leaves very small windows of opportunity when to attack them. I’ve not gotten very far in the current version of the game yet, but I do hope that size/range advantage and minion helpers are not the only challenges the bosses will be presenting later in the game and that they’ll involve some clever fighting mechanics instead. I’d love to see some fights similar to Artorias, Manus, and Ornstein & Smough, for those familiar with Dark Souls.

I think right now, the game has a solid combat system that works well, and the two main things that the game needs are refining and variety. Refining some small aspects of the combat and dungeon-exploring so that it feels less repetitive and more streamlined, and a greater variety of enemies, weapons, goals/objectives in the dungeon, and types of environments, which again should help the game to feel less repetitive.

Finally to mention, the game also has a local co-op feature, so it’s possible to play through the dungeons as a team of two, although I’ve not gotten a chance to try that out.

The game has dark and gritty visuals, and in the dungeons there’s an atmosphere of isolation and hostility around every corner. It really does feel a lot like Dark Souls except from a more elevated angle rather than from directly behind the player. 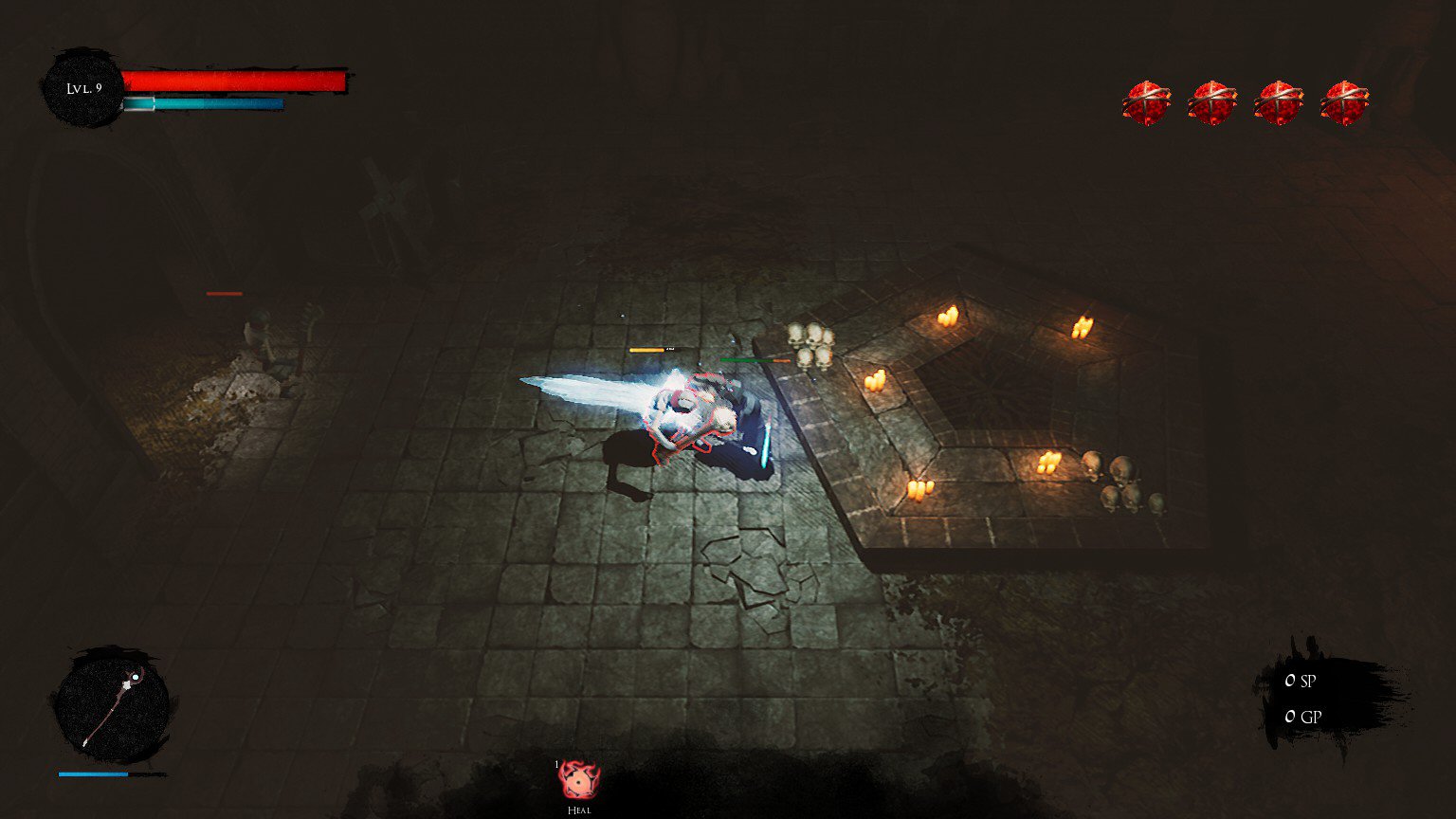 Music and sound effects are pretty good and fitting. The sound effects especially match the impacts really well to make the battles satisfying.

I think the UI could use some work. If you play with a gamepad, scrolling through the menus can be rather uncomfortable. I especially found it annoying when scrolling through the vendor’s shop, trying to buy the weapons I wanted. The screen only shows up to 3 weapons at a time and it’s not clear that there’s more. However, if you hover over the area near the 3rd weapon down the list, the list quickly starts scrolling down, so you can end up yo-yo-ing up and down the list trying to land on the item you need.

Some of the descriptions in the game at the moment need proofreading as they have grammatical or spelling errors, but this is not a big drawback, as the instructions still make sense. As far as tutorials and making the player aware of game mechanics, the game does it rather well, as it introduces them bit by bit rather than all at once. 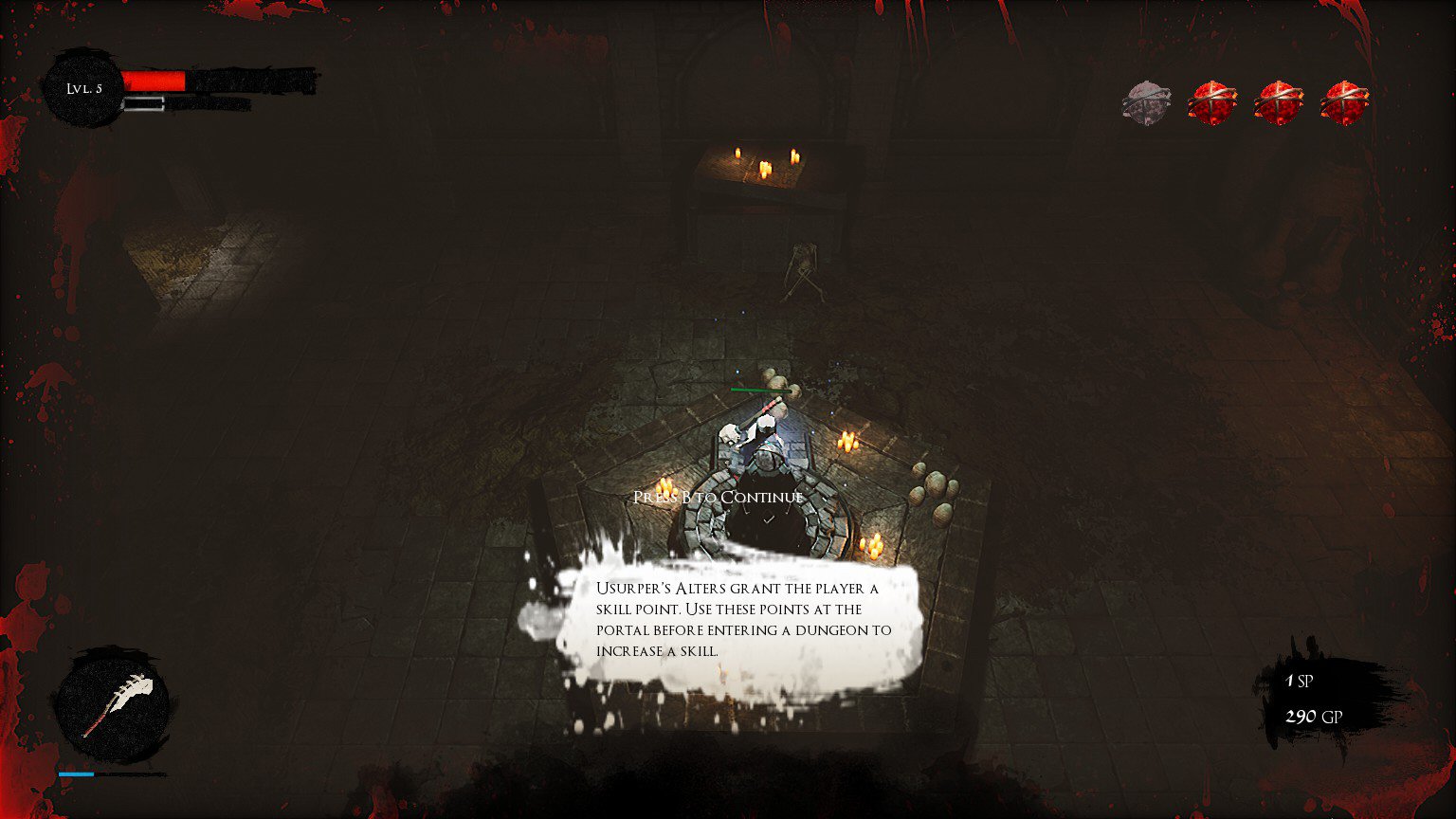 I didn’t come across serious bugs or glitches. There was only one minor bug where my character would start sheathing the weapon and facing away from a boss if I stepped away from him a little more than a couple of steps. I am not sure what was causing it, but a few times this happened, it caused the boss to deliver some heavy hits onto me while my character was going through the slow sheathing animation, which resulted in me losing the fight.

‘Usurper: Soulbound’ is an interesting action RPG with challenging combat that requires player to take care and approach things with caution. Its usurping mechanic is quite unique and makes the battles in this game different to most other similar games. Those who enjoy souls-like games will feel right at home here. As mentioned previously, the game has a solid direction and combat system, and I think a few aspects just need refinement, as well as more variety added into the game in a form of enemies, weapons, and things to do in the dungeons other than simply going to fight a boss.