Psychological horror. Moody atmosphere. Blood and gore. Disturbing ritual sacrifices. If these themes sound appealing to you, then read on.

Saint Kotar is a psychological and atmospheric horror game with themes of religion, witchcraft, and horrific rituals, and with gameplay involving point-and-click interactions and dialogue. It was developed by a small studio in Croatia, following a successful Kickstarter campaign back in July 2020. I did a review back then of the free 2-hour prologue demo the game had. However, a fair amount has changed in the main game from the prologue. Let’s delve deeper into this disturbing story. 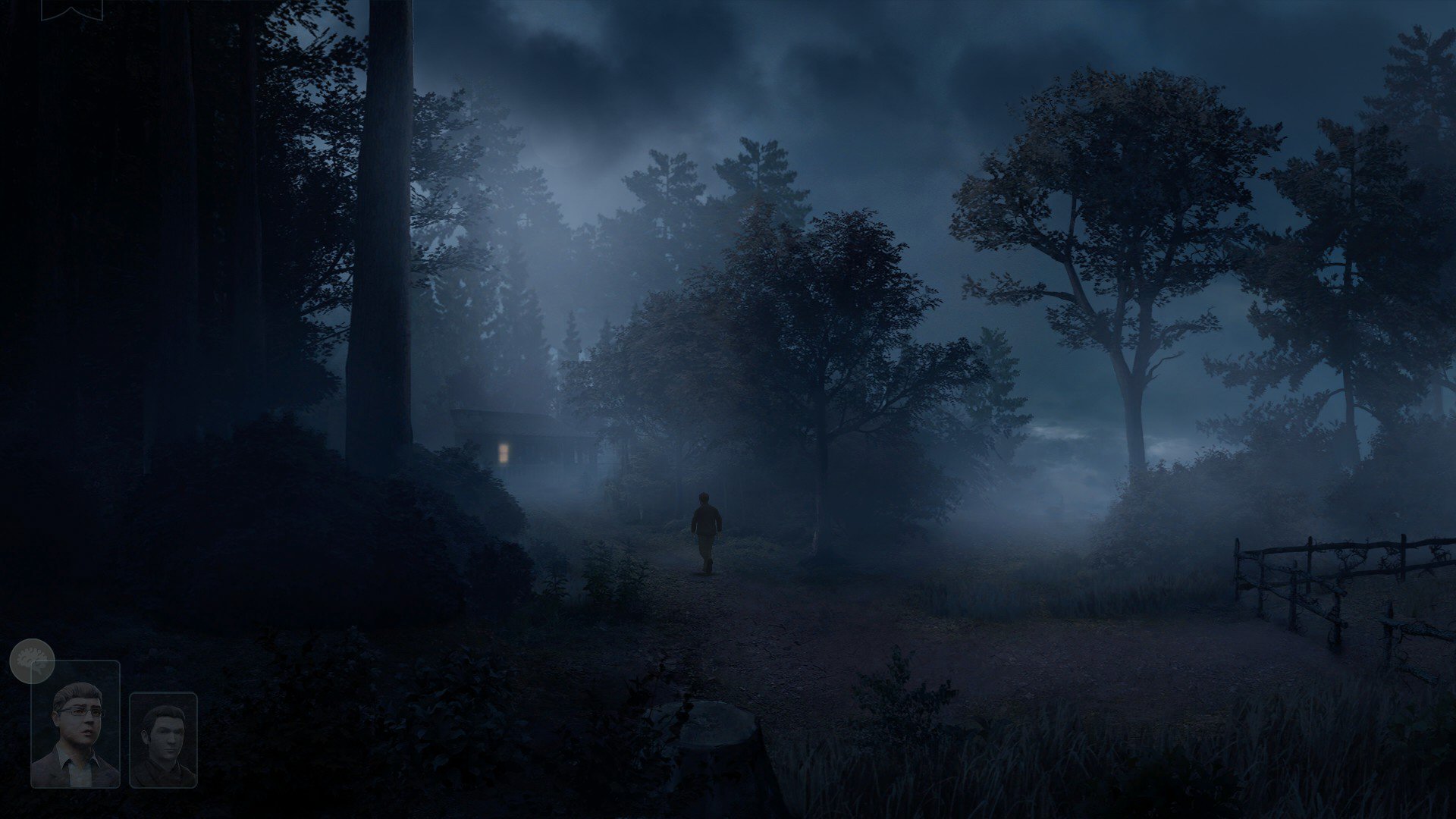 After arriving in a remote town of Sveti Kotar to watch a castle exhibition, Benedek and Nikolay wake up the next morning after terrible dreams. Benedek’s sister Viktoria, who is Nikolay’s wife, has gone and not told them where to. The two men begin a search for her. Benedek, having had rather sour relations with her for some time, began suspecting her of having ill intentions, that she brought him into that town for some malicious reason. In addition to that, a recent murder took place the night before, and the police suspect Viktoria.

Benedek and Nikolay have no choice but to split up and start looking for her. The more we begin to explore this strange town, the weirder things get, and the more both characters start to get pulled into a horrific plan of events. 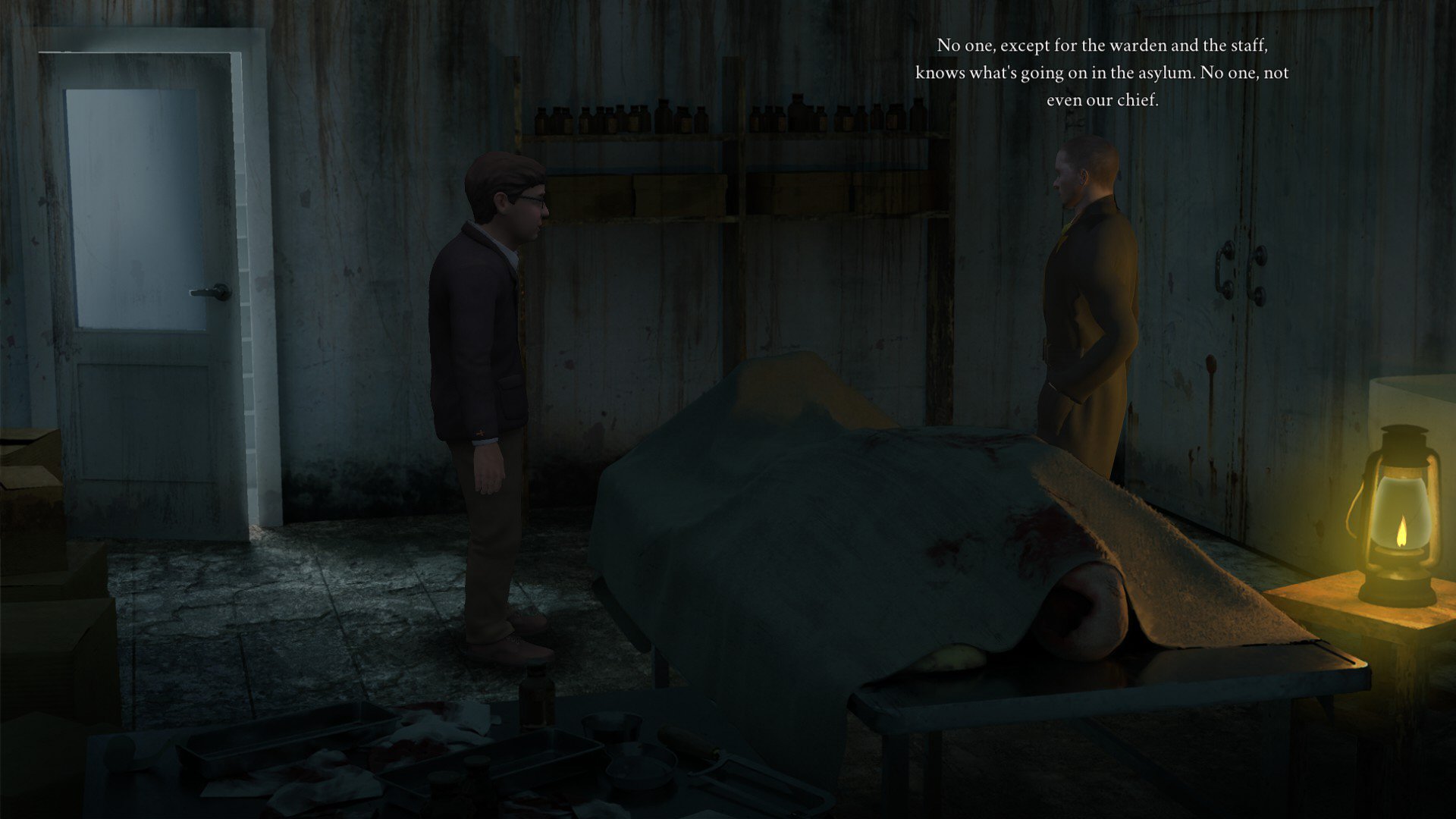 Both Benedek and Nikolay are very imperfect people. Benedek is highly religious and often comes across as inflexible and judgemental towards others, as well as quite cowardly and looking out for himself first of all. Nikolay comes across as loud and hot-headed, always rushing without a plan and being careless. Some players may find it hard to play as characters like that, but I think characters with such flaws can make for interesting protagonists as it opens up possibilities for character growth. After all, Saint Kotar is not a flowery and positive story. It’s somber, grim, and full of horrible things, and characters like that fit right in with such story.

I thought the overall setting and lore were quite imaginative, delving into the witchcraft and the occult side of things and making it believable and disturbing. There are very obvious Poe and Lovecraft vibes to the whole setting and story. 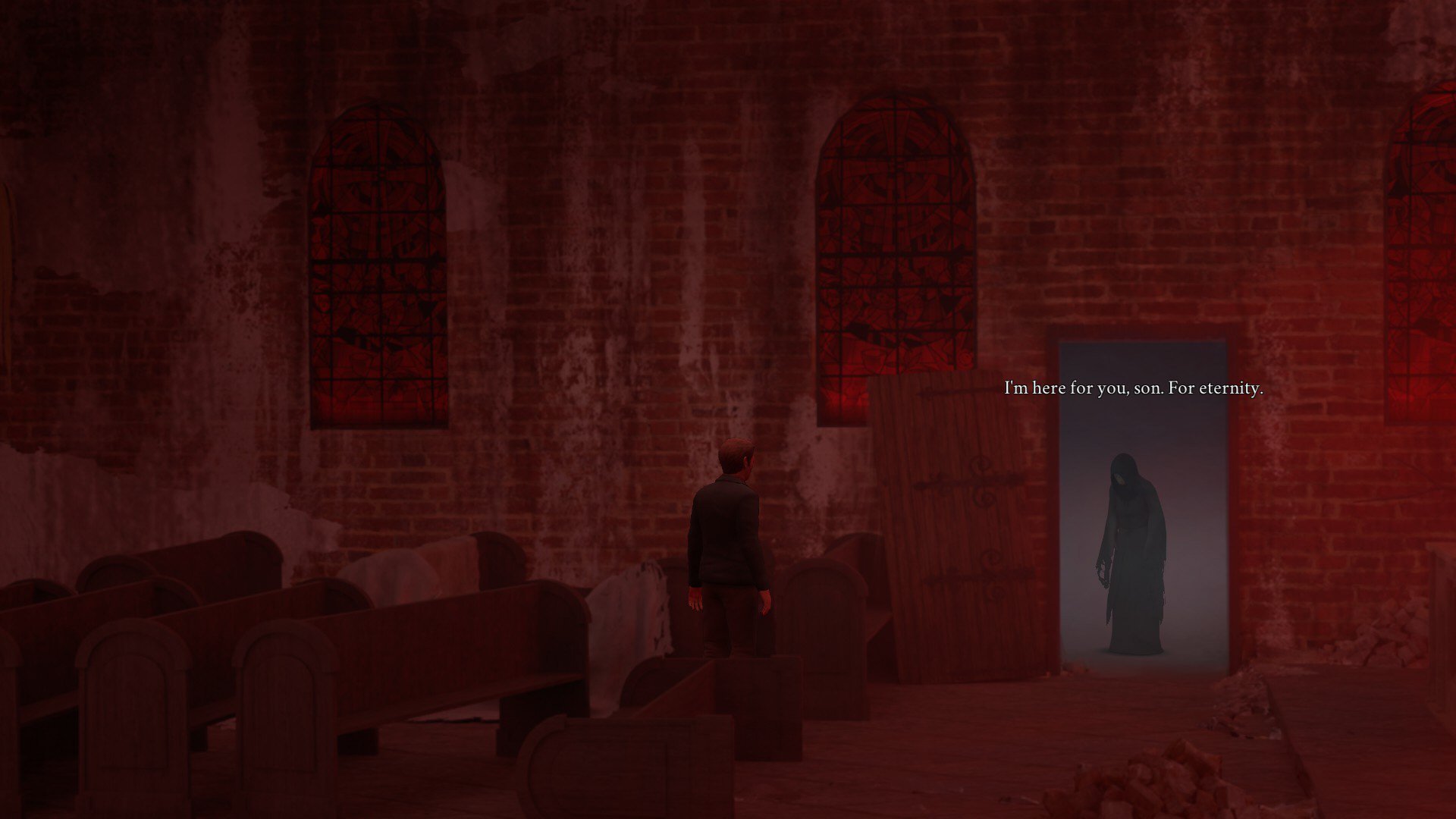 Without giving away any spoilers, I felt the ending could’ve used a bit more development though. Otherwise it feels a bit too barebones and ambiguous the way it is now. Some more choices on what to do in the final scenes would’ve been good too, otherwise it just felt like we were railroaded into that specific conclusion.

The gameplay has us take control of both protagonists and explore the town. As the story progresses, we alternate between Benedek and Nikolay, with some events witnessed from point of view of one of them, and other events by the other. As we explore the town and pursue our objectives, we get to talk to people living in this town and gather information from them, as well as interact with the environment and occasionally solve puzzles akin to other point-and-click adventure games. 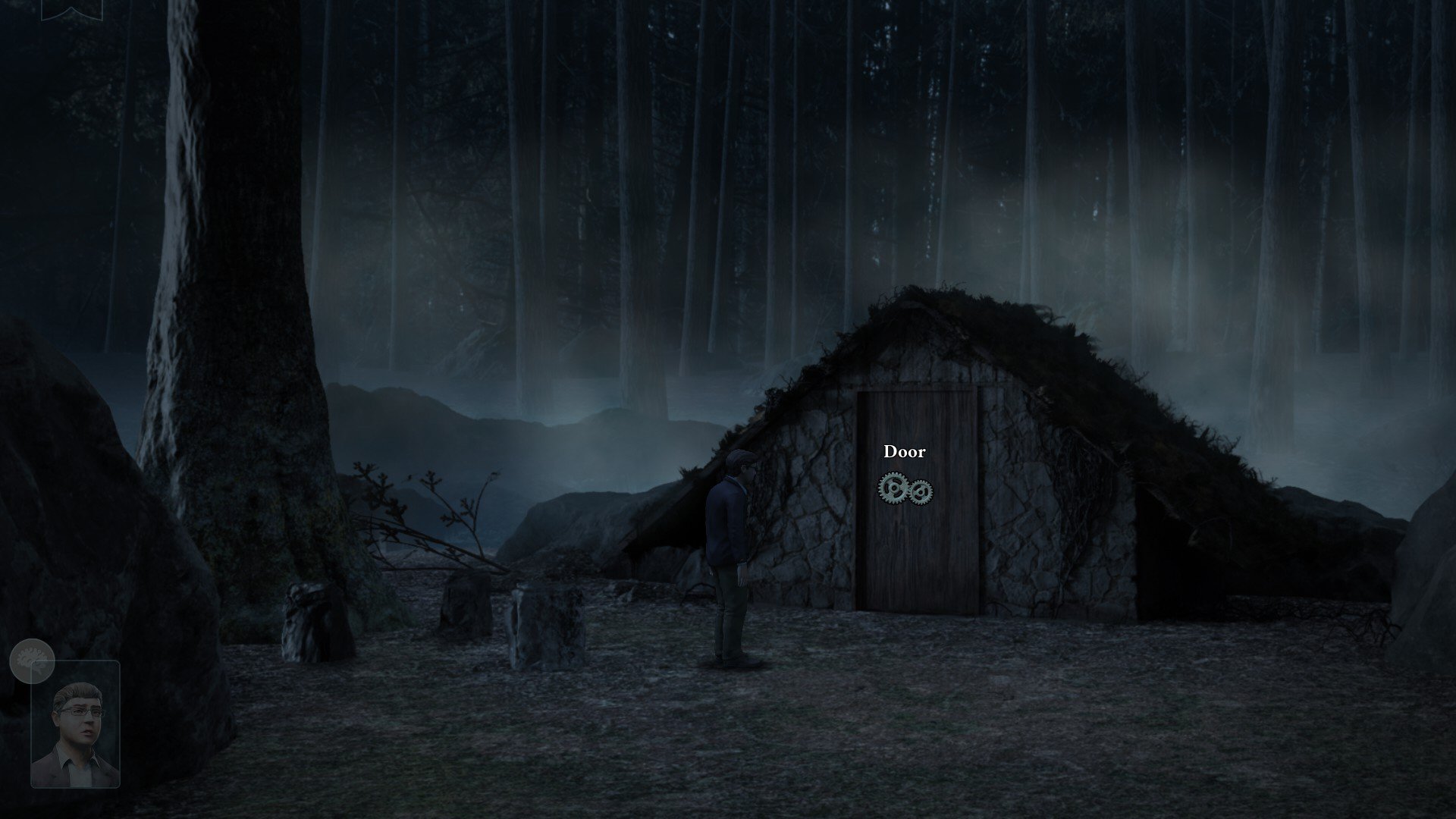 The pacing of the gameplay is quite slow, so we really need to take our time to explore everything and engage in lengthy conversations with the NPCs. The events build up gradually. The game focuses more on narrative and talking to characters rather than on solving puzzles. Most of the puzzles are pretty straight-forward and wouldn’t keep you stuck in one area for long. So, if difficult puzzles is what you’re primarily after, you might not find it here.

As far as dialogues go, we often have different options presented to us, although I noticed only a very small number of these involve actual choices. Most other times we simply exhaust each option as part of the information gathering before moving on to the next part of the conversation. However, a few choices the game does give us, can be quite meaningful and have a big impact on the future events. 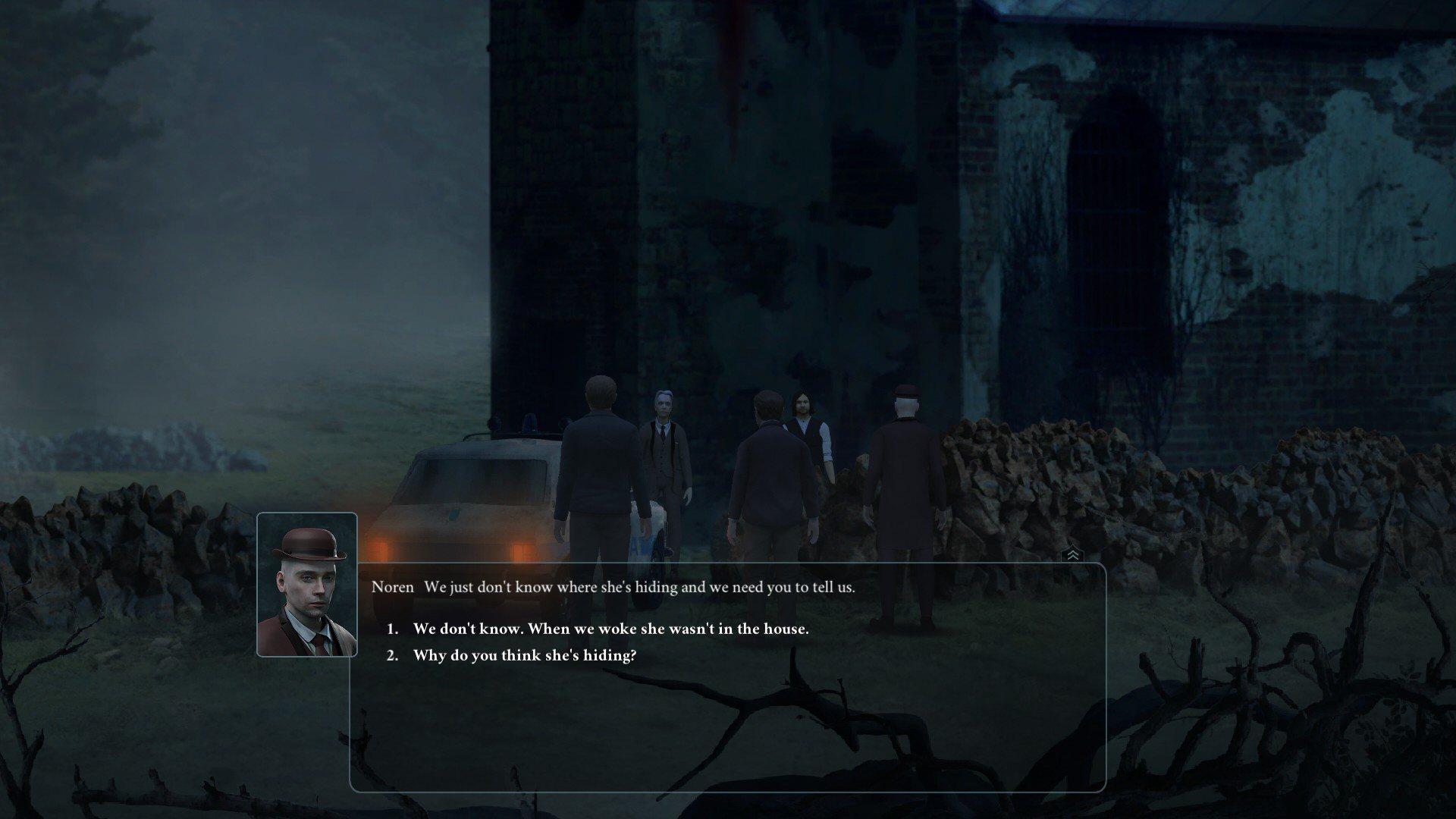 On some occasions, our actions or choices can lead us to an early game over, where we see our character killed in some horrific way, so it is recommended to save frequently (although the game also autosaves in each location too). After all, the town we’re in is not a nice one and danger is around every corner. I did come across about 3-4 of these, but there could be some that I missed. Some of them might feel a bit unfair as there are no indications that they might happen, but if you save often, they shouldn’t bother you. They’re not too frequent to be an annoyance and in some instances can enhance the experience of danger.

The game is super atmospheric. The somber mood has been executed with perfection. Most locations look eerie and make us feel uneasy. The visual style of the environments is splendid really. Some of the locations look quite ghastly, with an otherworldly touch and places of dark rituals. The game doesn’t hold back on the gruesome factor and implied violence that took place in some locations. 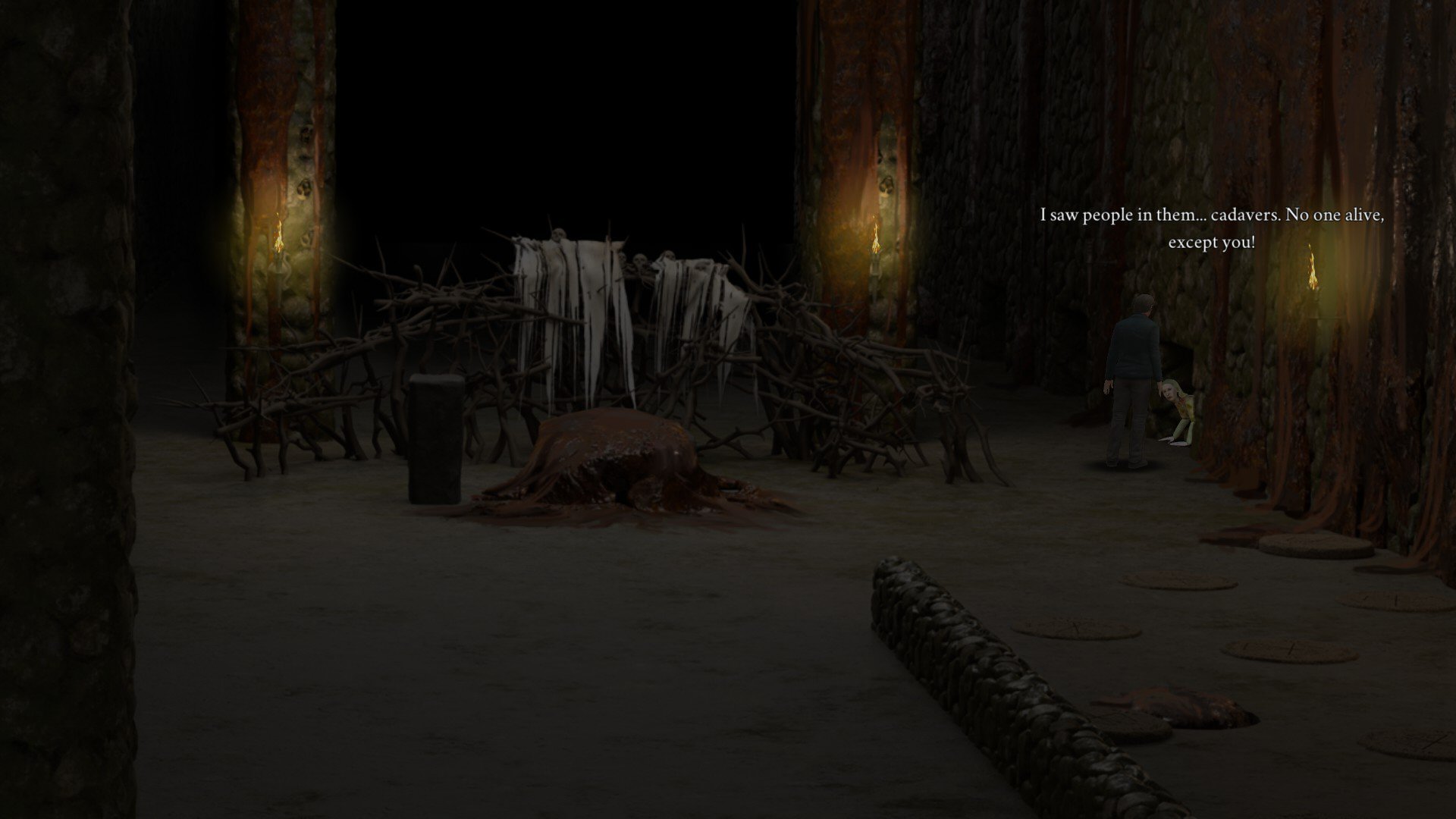 The character visuals are pretty ordinary, but serviceable. The movement animations could’ve been better and smoother, I feel. And some of the action parts are not shown at all – we just see a dark screen with voices shouting, so it’s still clear what happens, but it would’ve had more of an impact to actually see some of the struggles that take place.

Music is mainly ambient and fitting to building tension. The game also has a full voice-acting (as it managed to reach that stretch goal during the Kickstarter campaign). Most of the voice-acting is pretty good, especially by the main characters. There are a handful or so of minor characters that have somewhat of a lower quality voice acting, which might explain why some players have criticised the voice acting, but the devs have confirmed that they’re going to redo some of the voice lines in the game and update it.

The game could also use a few quality of life improvements, I think. The biggest one that comes to mind for me is an option to move quicker to a target destination in an area. Some areas can be quite big, like the main square in town, and the characters walk and even run rather slowly. Many point-and-click games allow your character to teleport quickly to the area exit if you double-click on it, so it would be nice to see this here too. Otherwise exploration or even just getting about from one location to another can feel like a bit of a chore. 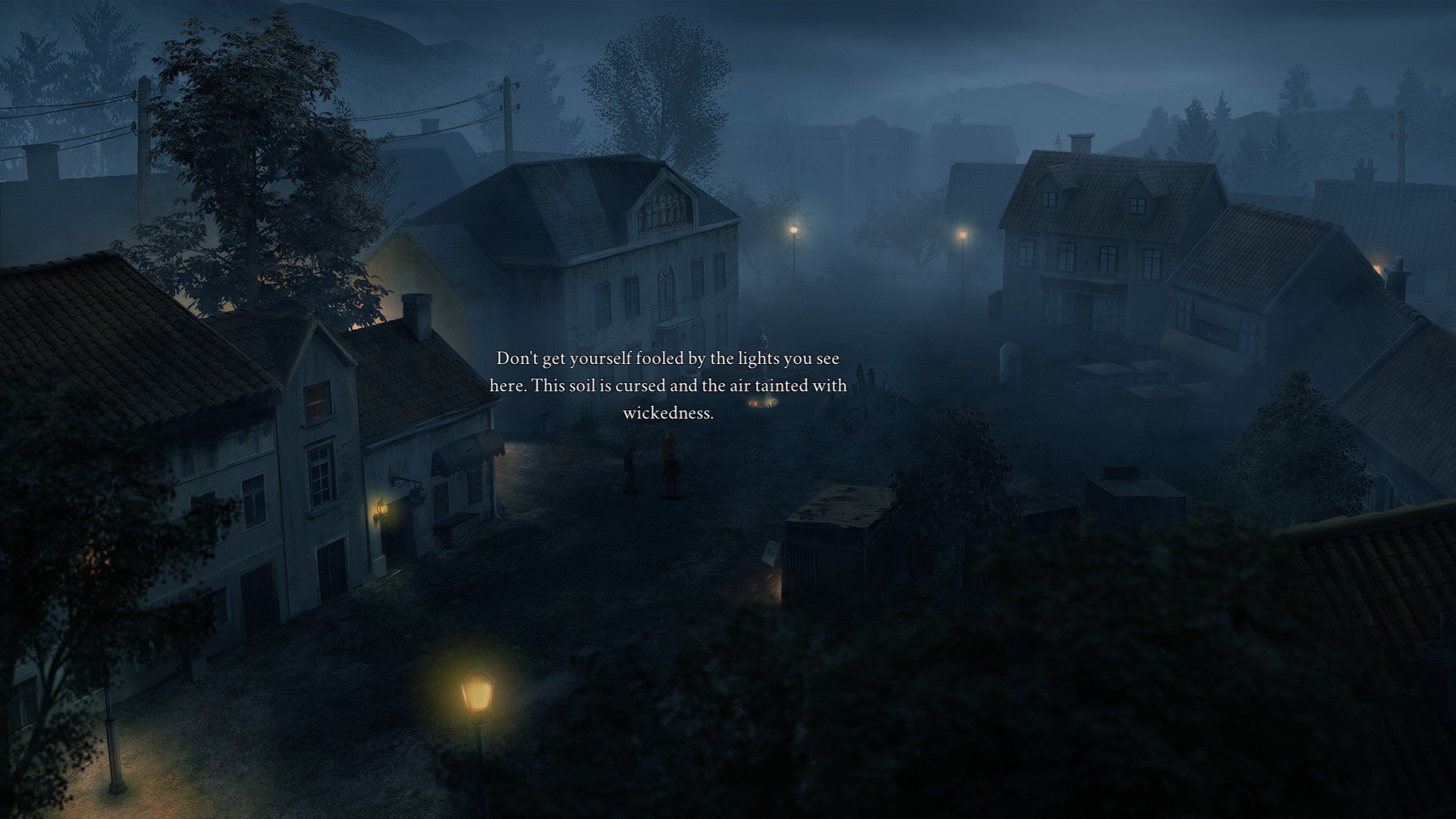 I generally enjoyed the story and the atmosphere of Saint Kotar. It’s pleasantly disturbing, unsettling, and disgusting – exactly as psychological horror should be. The characters are interesting and imperfect, and the lore has been developed really well. The gameplay is on the slower-paced side and involves more of a focus on story, exploration and dialogues than on solving puzzles. There are a few rough edges here and there, and a few improvements in presentation and handling could be made, but generally the game is pretty solid and I believe it delivers on what it promised.