We all ran into situations as kids where we ran into a chain email/text messages, or a creepypasta with a ritual attached, or even the dumb 3am challenges on Youtube and of course we believed it. Doing what it requested so we don’t get bad luck or get a vengeful spirit on us, or doing the ritual for fun and making sure to do it perfectly so it doesn’t backfire. Of course, as we grow up, we learn that it wasn’t actually going to happen as it was meant to scare us to do it (and I totally didn’t get detention for telling other kids about a scary story that wanted me to spread it to 10 others). Though, there’s always that nagging voice in the back of our minds saying “what if it’s real and you just doomed yourself?” 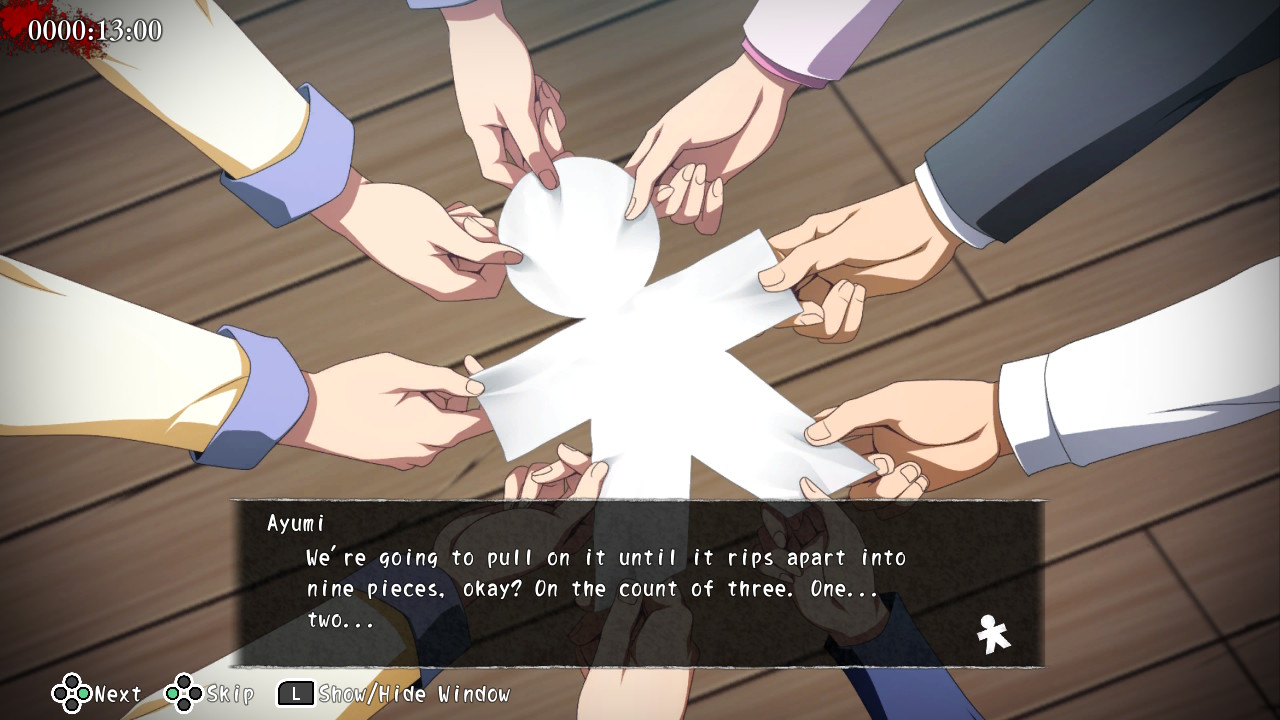 Corpse Party follows a friend group (plus a teacher and Satoshi’s younger sister) who is trying to make the day the best one ever as it’s one of their friends, Mayu’s, last day before she has to move away. The seven stay longer than usual, not wanting the day to end, and Ayumi decides to tell some ghost stories as she’s interested in the occult. After scaring scaredy pants Satoshi, she decides to tell the others about this ritual that she read online. Called the “Sachiko Ever After” ritual, which revolved around an old serial murder case at Heavenly Host Elementary School, all they have to do is make the paper doll charm, have everyone hold onto it, chant “Sachiko, we beg of you” for each participant (which here it would be nine), and pull it apart so everyone has their own piece. As long as they keep their scrap of paper, they’ll be friends forever. Innocent enough, right?

Sachiko, we beg of you 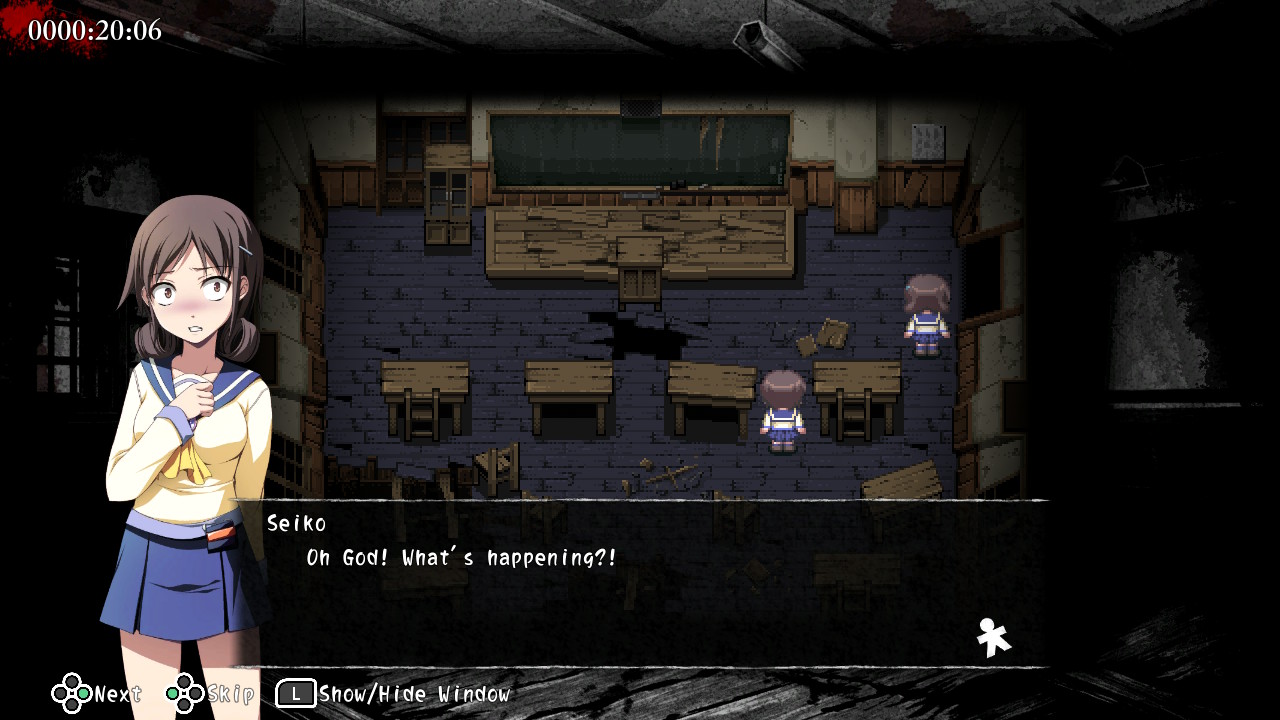 Of course, it all goes wrong. After performing the ritual, a surprise earthquake happens and causes the floor to open up. Swallowing all nine of them and while they don’t know it right away, they get transported to Heavenly Host. An alternate version of Heavenly Host that has many different “closed spaces”, so while you may be in the same area as your friends you won’t be on the same layer as them, and is host to many corpses and spirits that did the ritual themselves and perished here. Not to mention that there are some particular vengeful spirits that won’t hesitate to kill you and the school itself is working against you as it will slowly drive you insane.

Due to these circumstances, you won’t stay with just one character the whole game. Jumping between characters so you can get the different perspectives, you’ll need to explore Heavenly High, try to survive, figure out what the heck is happening, and regroup so everyone can return to the real world. Luckily, everyone was sent to a closed space with someone else (either there isn’t that many closed spaces or its a way that the school is torturing them) and you get to explore Heavenly Host. While there are moments that you’ll just be wandering around not knowing what to do to continue, you’ll basically be tasked with exploring, interacting with the environment and finding needed items, solving some puzzles here and there, and making sure you don’t get caught by any vengeful ghosts. While there are deaths that are fated to happen, there are deaths that you can cause yourself by choosing to do something wrong (like getting caught or choosing a wrong choice) or doing something that ends up spiraling into a Wrong End. Giving you a pretty descriptive description of how the character died. Make sure to save often (and use the temp save feature which I think is new in this version) as you won’t be able to unlock the next chapter until you get the True End. This can cause some trial and error on the player’s part, but luckily there are guides out there if you have no idea where you need to go. 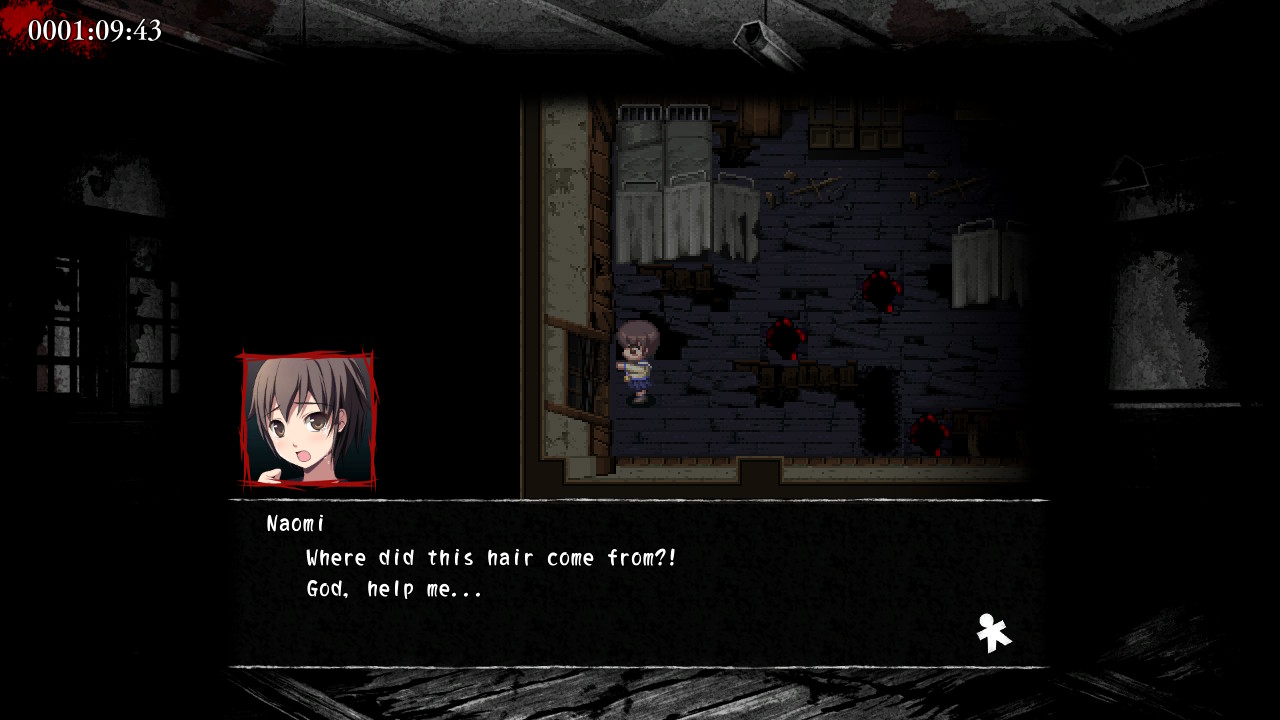 I really ended up liking the story told here and while it seems so weird and convoluted when reading a summary, it does end up making sense once you actually play it. The game does not shy away from describing the gruesome scenes, I even felt a bit nauseous reading one of the Wrong Ends, and it’s even more heartbreaking as the story does a good job at getting you attached to these characters. You just want everyone to live, but you can’t escape from having to watch and hear them die as you hopelessly look on. There’s a high chance that you’ll be just as devastated as the other characters when one of them dies.

If you wanted more out of Corpse Party, you’re in luck. First of all, there are a lot of Wrong Ends for you to try to figure out and get (or just use a guide). You can see what endings you already have, and haven’t gotten, but its up to you to find out what you need to do to give the characters a gruesome end. There are also the Extra Chapters, which were added in with each re-release that this first Corpse Party game got. These extra chapters are basically bonus chapters, like the name suggests, that dives into aspects of the story that you didn’t get to see. Some of them are purely visual novel cutscenes, while some include gameplay, but if you want more Corpse Party and want to know more about what happened (without buying the next game in the series that is), these Extra Chapters will serve well. Though, you’ll have to get some Wrong Ends to unlock most of them.

There are also a lot of name tags that you can pick up. While some are located on the ground or when interacting with something else, the vast majority of them are found when you go to… inspect a corpse. Just like this set of friends, many others have made their way here and the school is not about to hide its skeletons. As each corpse you see used to be someone that was alive and had their own history and reasons why they did the Sachiko Ritual, why not have a collectible that is about that? And the name tags are just that. Gathering the name tags aren’t needed, nor does it unlock anything from my knowledge, but it’s something nice to collect and look back on to see what their names were, the schools they came from, and what they died of. 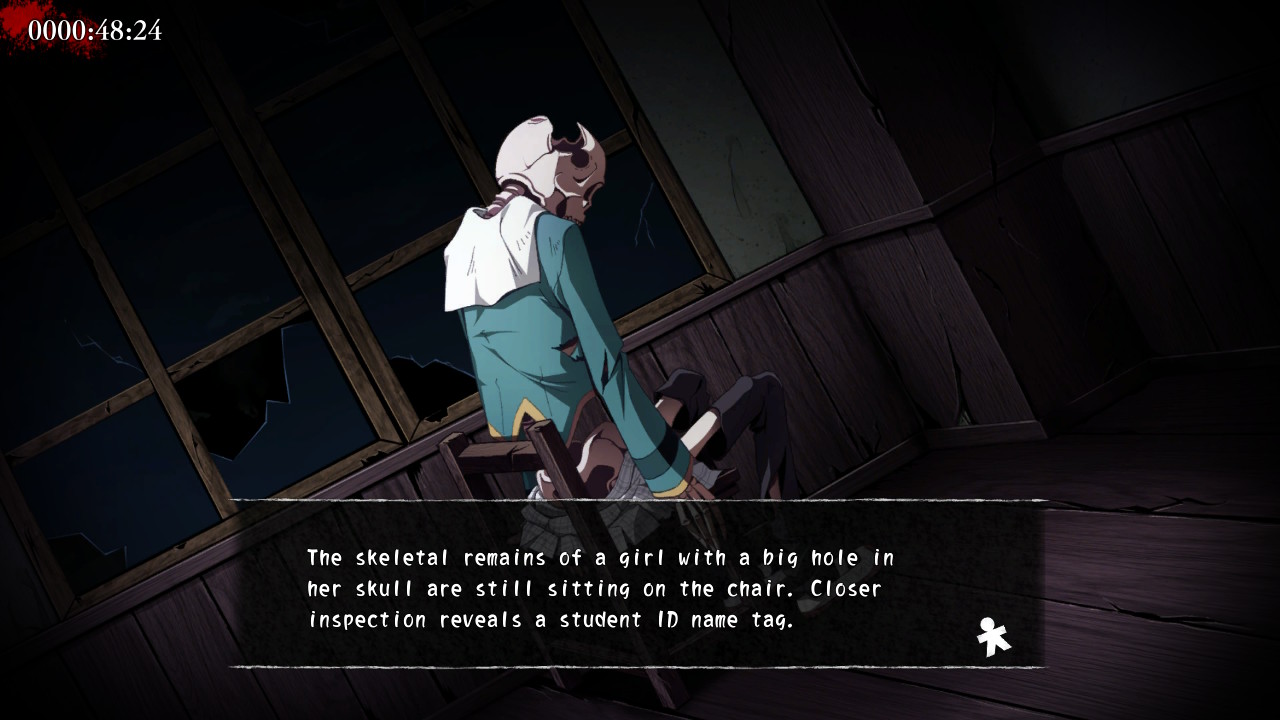 I really can’t review Corpse Party and not mention the audio. While the beginning does have some lines that weirdly sound like they’re a part of the background music, the audio here is as outstanding as others make it out to be and definitely adds to the atmosphere. One of the best parts of Corpse Party was the voice actors, which they chose great ones to voice the characters for this series. They put in a lot of emotion into their lines and man the evil and/or creepy lines are delivered so well that it had me creeped out or terrified just like the characters (I don’t want to spoil you on specific scenes though). And the screams. Any other game you could probably tell that they were holding back or obviously not giving it their all, but here it sounds real. It sounds like the characters are actually terrified or in pain, it makes the scenes even more disturbing. I even found myself needing to skip some as they felt a bit too real. And of course, one of the more horrifying scenes with screaming that happens in a late game scene was the one time I didn’t have headphones in and I was a bit worried my neighbor would think I was getting murdered.

Also did I mention that it has 3D audio? While I don’t think it’s perfect, it does work pretty well in immersing you more into the game. I especially love the moments where some lines are just… whispered into your ear. For sure consider playing with headphones (and try to power through the screams). 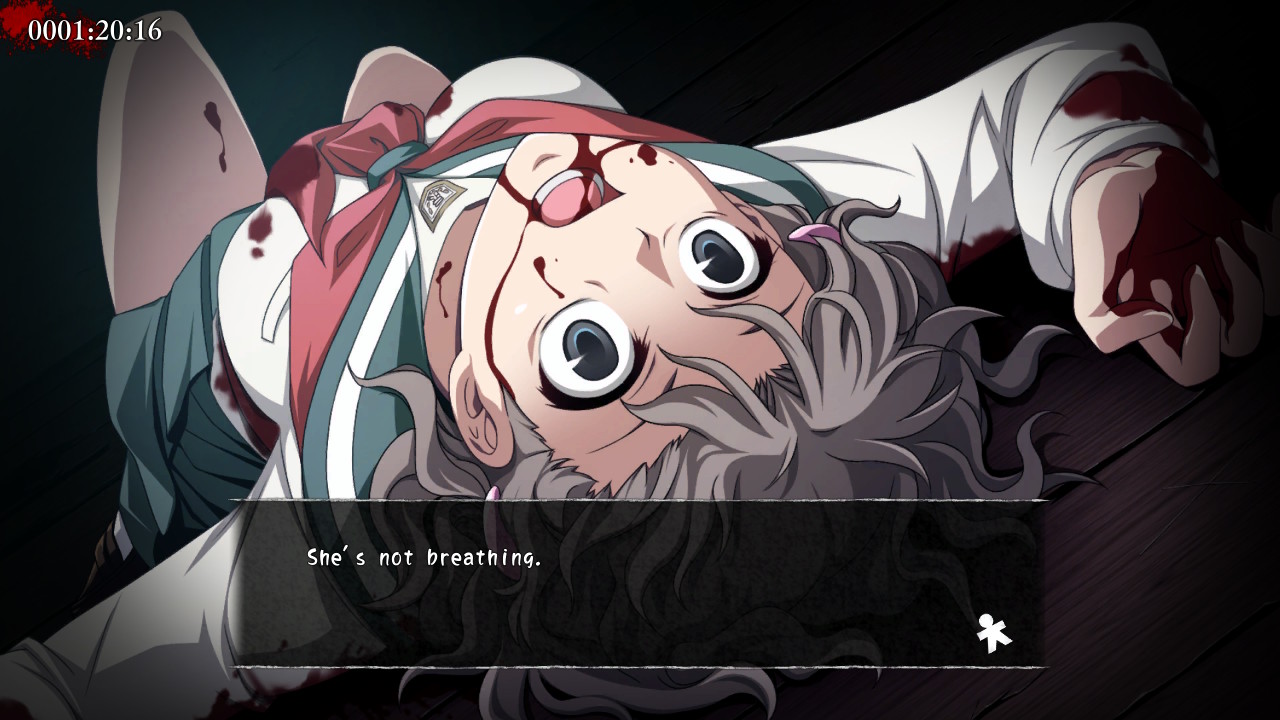 With how much I saw Corpse Party being recommended, I’m glad I was finally able to experience Corpse Party, and a re-release at that (who said procrastination is bad all the time). Though no amount of people mentioning how morbid it is or certain shocking endings could have gotten me ready. While there are moments where you’ll be wandering around trying to figure out what to do to continue and there are some audio issues (and a particular bug pit puzzle where the original 1 minute timer was lowered to 10 seconds), Corpse Party is a fantastic horror game. It’s not the kind of horror that relies on its visuals, but one that relies in how it was written and the voice actors to horrify and unsettle you.

I definitely see why a lot of people love Corpse Party and this is the perfect opportunity to get into it. Or even just the best version (from what I understand at least) to pick up if you just want to experience the first game. If you’re new to Corpse Party, or want the visual and audio upgrade as well as more extra chapters if you already own the 2016 Steam release, I definitely would recommend picking up this 2021 release. Just be sure to brace yourself

While the prime Halloween time has already past, I definitely recommend playing with headphones in. Bonus points if you play late into the night with the lights off and only the flickering of a candle illuminating your walls.