Arboria lets you play as a troll and hit things, and makes indulging your inner caveman pretty fun.

Rogue-Likes came about from, well, Rogue, a turn-based game that encouraged you to think things through, since if you died that was it. While modern examples of the genre are far more forgiving they tend to follow that same idea. Sometimes though, you don’t want to think everything through – sometimes you just want to hit things. And there’s few races better at hitting things than trolls.

On the world of Arboria, the Yotunz Tribe is going through a crisis: their Father Tree, the lifeblood of the tribe has come ill with an unknown disease, and if nothing is done all of them are doomed. The only saving grace is the power of the tree to create life, allowing them to breed troll warriors that can hopefully brave the labyrinth below, Durnar, in order to locate the disease and cure it. Naturally this won’t be easy, as Durnar is filled with monsters, traps, and who-knows what else that will block your path at every turn.

Arboria’s steam page doesn’t exactly hide that they based their combat on Dark Souls, and as played out as that kind of comparison is I do think it’s worthwhile here. You have a wide variety of weapons to use with different speeds and combos, light and heavy attacks, and various abilities you can acquire. You even have a flask, or in this case, a bong (it’s that kind of game). Your troll does control well and I’ve never felt like damage or death was something I couldn’t have avoided at all. There’s some things you do need to get used to, like how each weapon works as some have different mechanics to them, but I don’t think that’s an unreasonable learning curve.

There are things to keep track of in Durnar besides your health and the things trying to kill you, of course. Defeating enemies and breaking certain cashes gives you Veri, the game’s primary currency used for purchasing things in the dungeon and buying permanent upgrades in the village between runs. Getting it has some maintenance involved, since your fairy companion Rata can only carry a certain amount at a time, and banking your full amount requires beating a floor and using a machine for that purpose before the next. This same area gives your troll a perk from a selection of three, as well as the option to set up shortcuts for later runs using batteries, a rare drop. 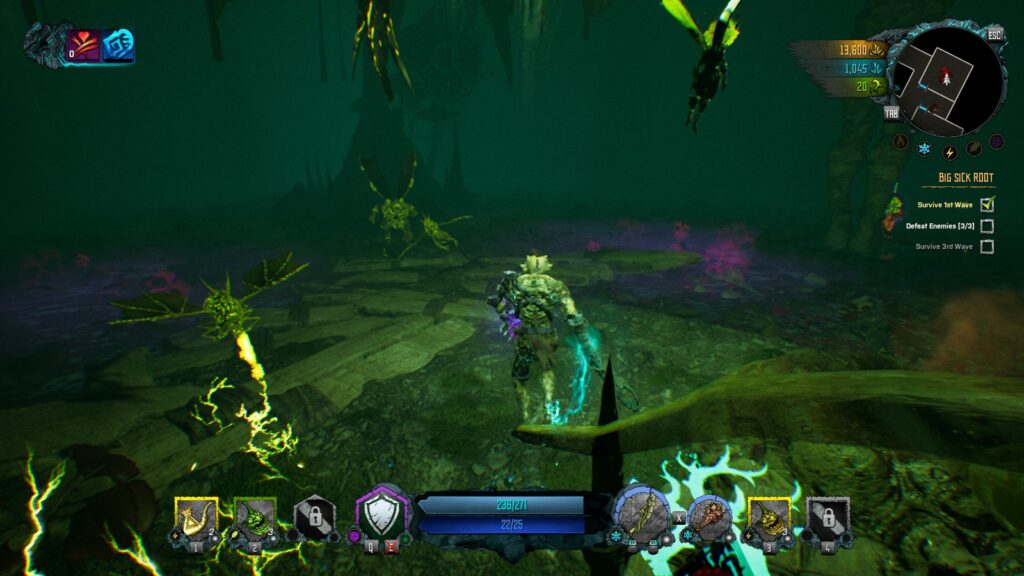 What is most interesting are Roots, parts of the Father Tree that have grown ill which you can heal – and probably should, as upgrade thresholds and whole categories of upgrades are locked behind how many you have. Doing that though requires completing an endurance battle pitting you against several waves of enemies, something that can eat through your health and resources if you’re not careful. It’s an interesting balancing act.

Making it a bit more complex is what happens between runs, following a troll’s death. The Jotun are beholden to their gods, and they expect tribute before each new line of warriors. That means giving them Veri from what you’ve gathered; if you give them enough they’ll be satisfied, which will produce average stats among the next possible trolls, or even delighted, which ensures they’ll have the best possible stats and perks. And of course, if you feel like being a tightwad the next generation will have worse stats and negative perks. How much they ask for can be lowered by performing well with your current troll and achieving certain milestones, like killing a certain amount of a given enemy. It’s an interesting system, and I imagine there’s some strategy there, since if you have a certain upgrade you’ve been looking at you may be tempted to give them nothing and deal with the consequences – or just to see what negative perks the game might thrust upon you. You unlock new perks through certain accomplishments in-game, but you can also unlock negative ones via screw-ups such as taking too much damage. 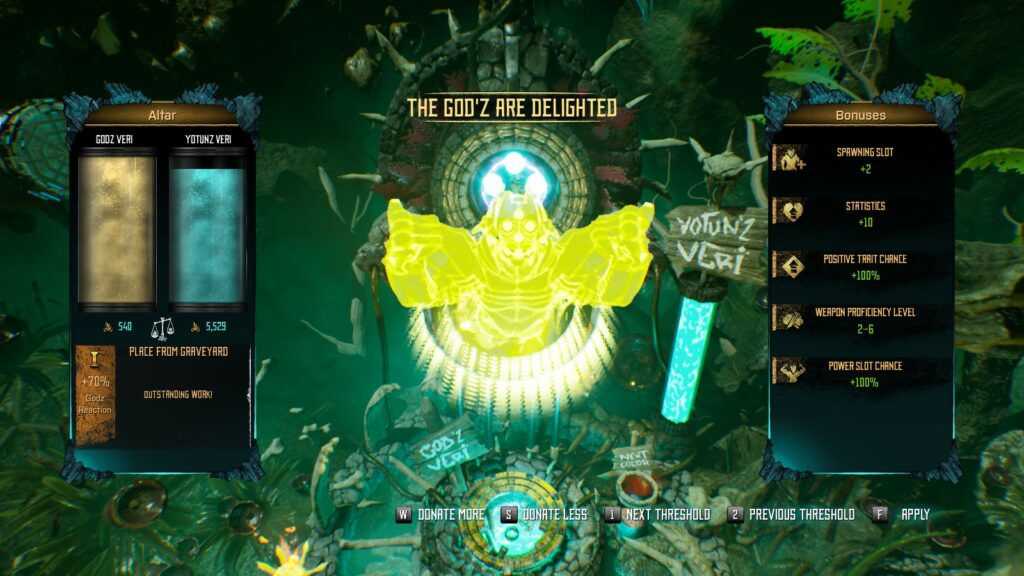 Graphically the game looks quite nice, with splashes of color livening up a cave setting that could have run into the problem of being a bit dull. Your enemies are mostly distinct as well, with the exception of some of the early bug enemies, as there’s a few variants on the wasp one that all do different things. All in all I have to give them credit for a full 3D setting like this, since it’s not terribly common for the genre. Unfortunately that does come with one of my complaints with the game: while it looks nice, it also makes my computer, which isn’t horribly out of date, run a bit hot. I can run modern stuff, so it may be it isn’t the best optimized.

Another, more general point of contention may be the game’s sense of humor, which I don’t think everyone will be a fan of. It has some vulgar jokes – the game opens up with one of them urinating over dramatic narration, your healing item is a bong, and the method Rata banks your Veri is to uh, ‘dispense’ it the hard way. There’s also reference humor which can feel a bit out of place. Rata will tell you to ‘stay a while, and listen!’ in a certain spot in town, which is fair enough given the game’s dungeon-crawling focus, but then there’s also this: 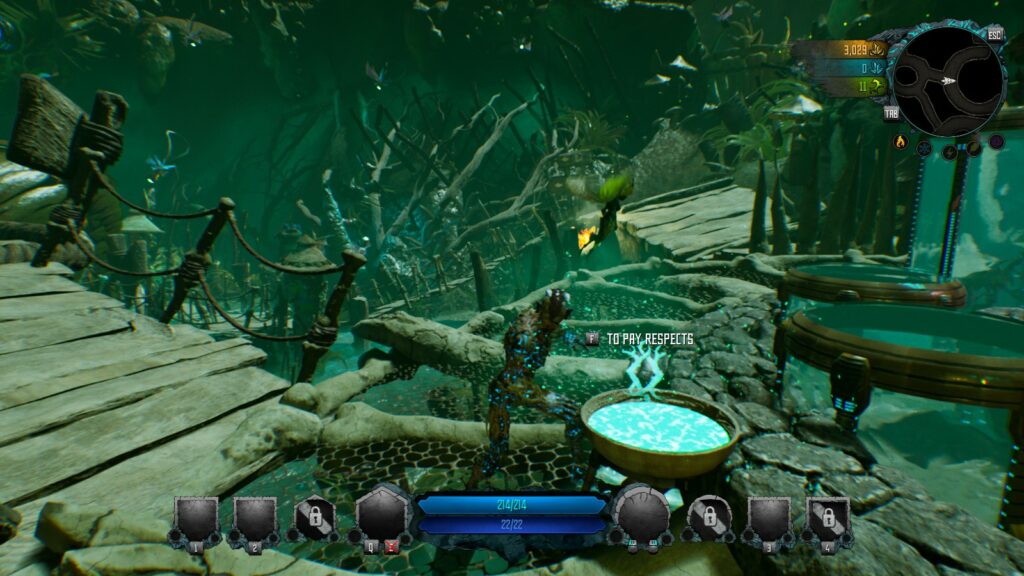 And like, c’mon guys. In general I also found your fairy friend a bit grating, but I was happy to find there’s an option to turn her commentary down or off entirely if you desire. I wouldn’t say this is a game that necessarily needs voice acting anyway.

To not end on two negative points, I will say I like where the story seems to be going. You learn fairly early on that this isn’t quite the fantasy story it looks like, since you encounter technology that’s far too advanced for such a setting, as well as logs referring to the planet Arboria. It makes me interested to see where they’re going to go.

I found Arboria an enjoyable game, and it’s clear the time spent in early access – a bit more than a year – was well-spent in ironing it out. I sort of wish I had found it before this, since watching it develop would have been interesting. While it has some quirks, I think it’s one to keep an eye on if you’re interested in this kind of rogue-like. I give it a Save.