Is it hot in here or is it just the fire?

When I played Fire Tonight’s demo during one of Steam’s game festivals I just knew I had to play the rest of the game. The art style drew me in and I quite ended up enjoying how the gameplay was presented. A fact that I learned afterwards was this was based on a song of the same name by Information Society (which I believe we call it a songfic in the fanfic world). I did actually look up the song lyrics and then proceeded to listen to the song before starting my playthrough and man I did not expect what it ended up being. It’s a good song, but definitely did not expect the beat it had nor the voice of the singer. I was also surprised on how much it correlated with the game, with it seeming like the lyrics are in Devin’s perspective. Anyway, feel free to listen to the song while reading. 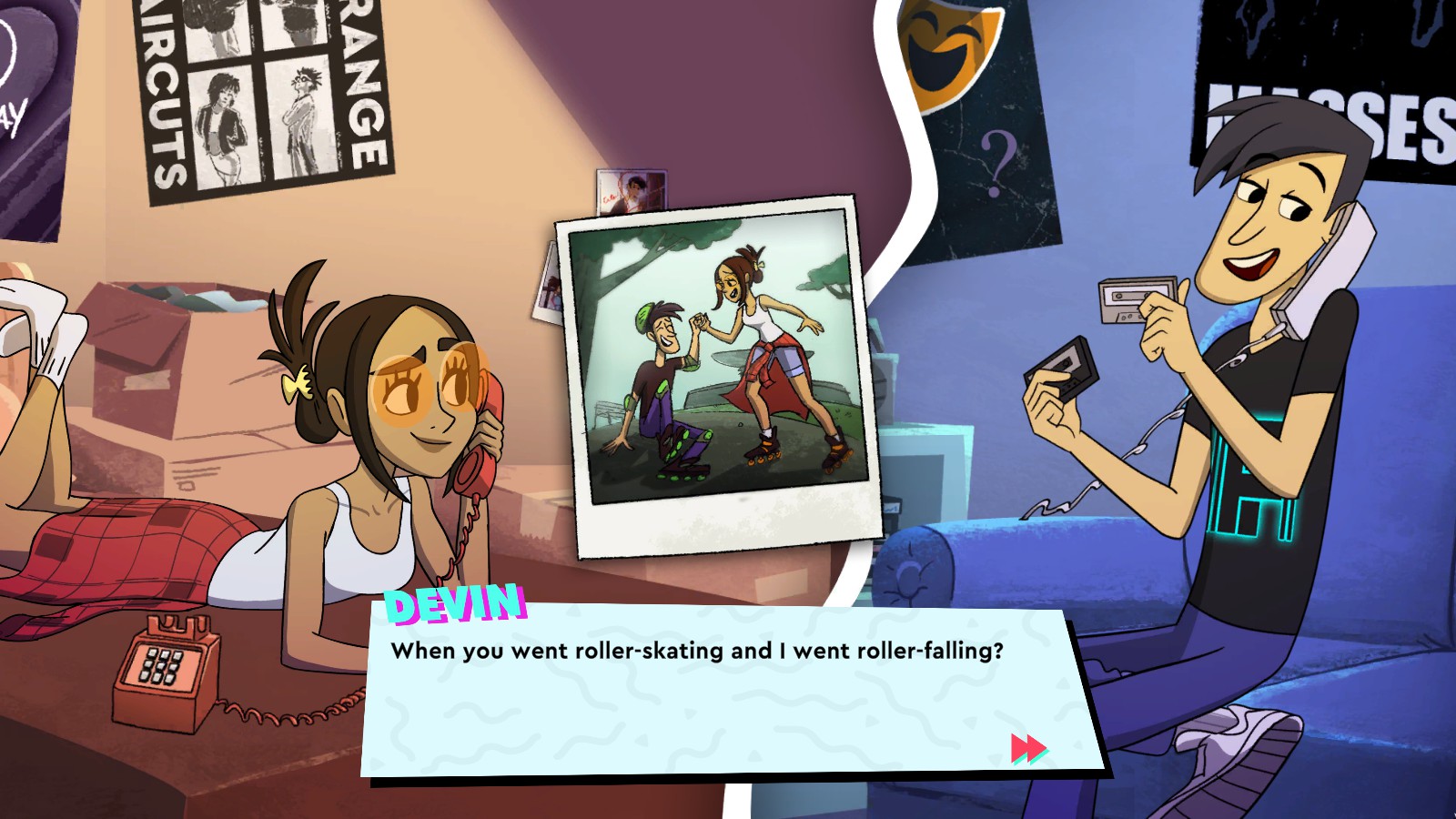 Fire Tonight switches between two perspectives: Maya’s and Devin’s. At the start of the game they’re just chatting on the phone about the past. Maya looking back on the uncertainty of her moving away from her family and everyone she knew, but then the happiness it brought as it ended up with her meeting boyfriend Devin. Looking back at the cute memories they made and captured so far as well has having some cute banter. But just as the conversation was getting good, Maya’s power goes out as well as the phone (naturally). Wondering why that happened, she slinks out from her window and sees the strange sight of the transformer being on fire and then the town on fire. As this is set in the 90s, both of them don’t have cell phones so they can’t just call each other back easily. So Maya has to go find a payphone that will actually send a call out so Devin will know that she’s okay. Though, considering the payphone is all static, she decides to brave the fire and find her way to Devin’s apartment on the other side of town. 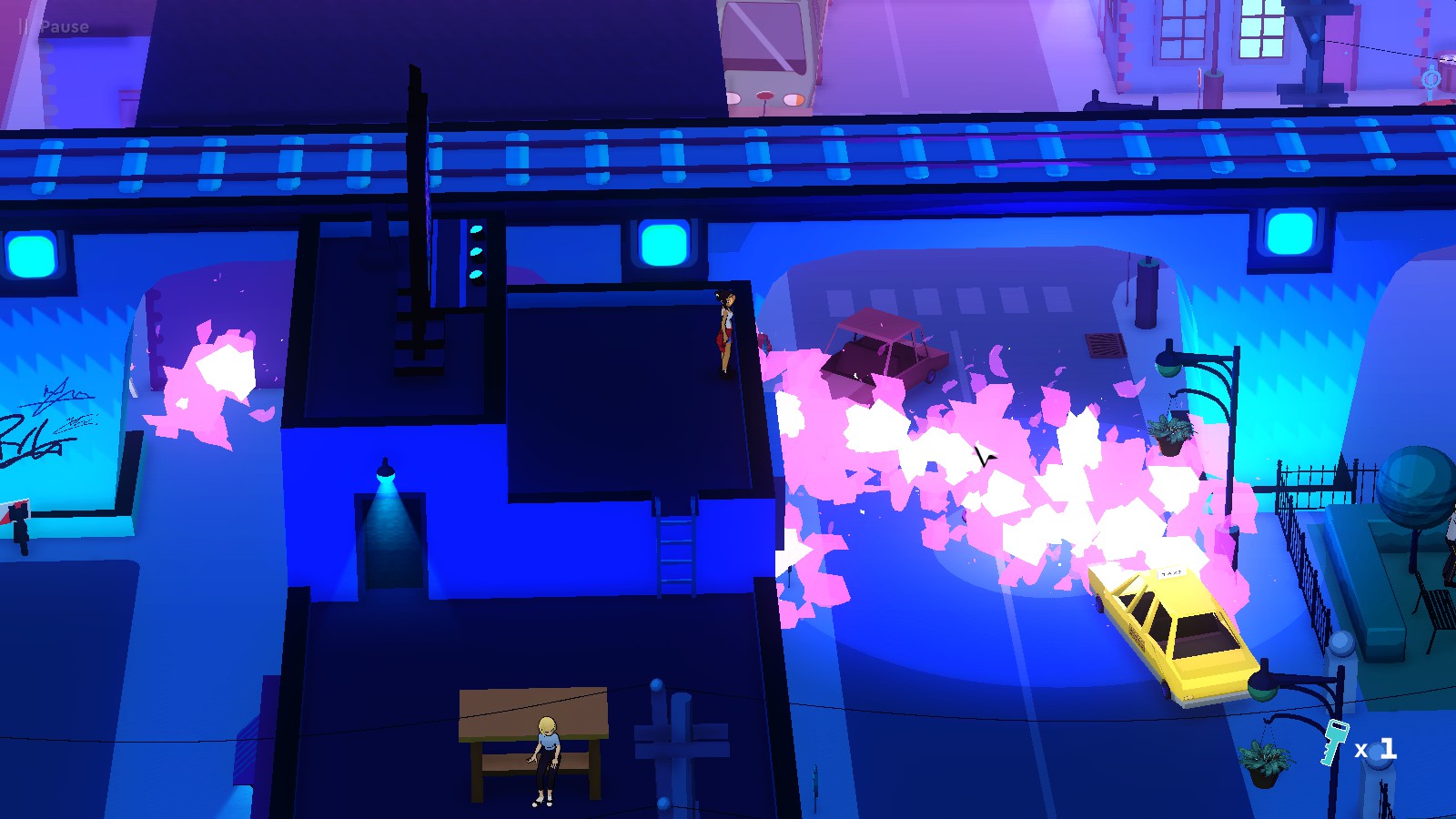 Maya’s levels are the puzzle sections, which each of her levels taking place somewhere on her side of town. Your goal is basically to find a way to travel to the next area (or level). However, it’s not so easy as just walking to where you need to go. There is the fire, of course, which doesn’t seem much of a threat to the buildings for the most part, but they do reach out into the streets and the back alleys. Blocking Maya’s path. You will also find gates and doors locked so you’ll need to find a key that happens to be laying around and you have to figure out a way to get there. To get around the fire and find a way to the key (which can be tricky), you can go into open doors that will spit you out where its twin is and climb ladders. The game is also set in an isometric view where you can turn the camera to see around corners or behind the building Maya has to get behind. 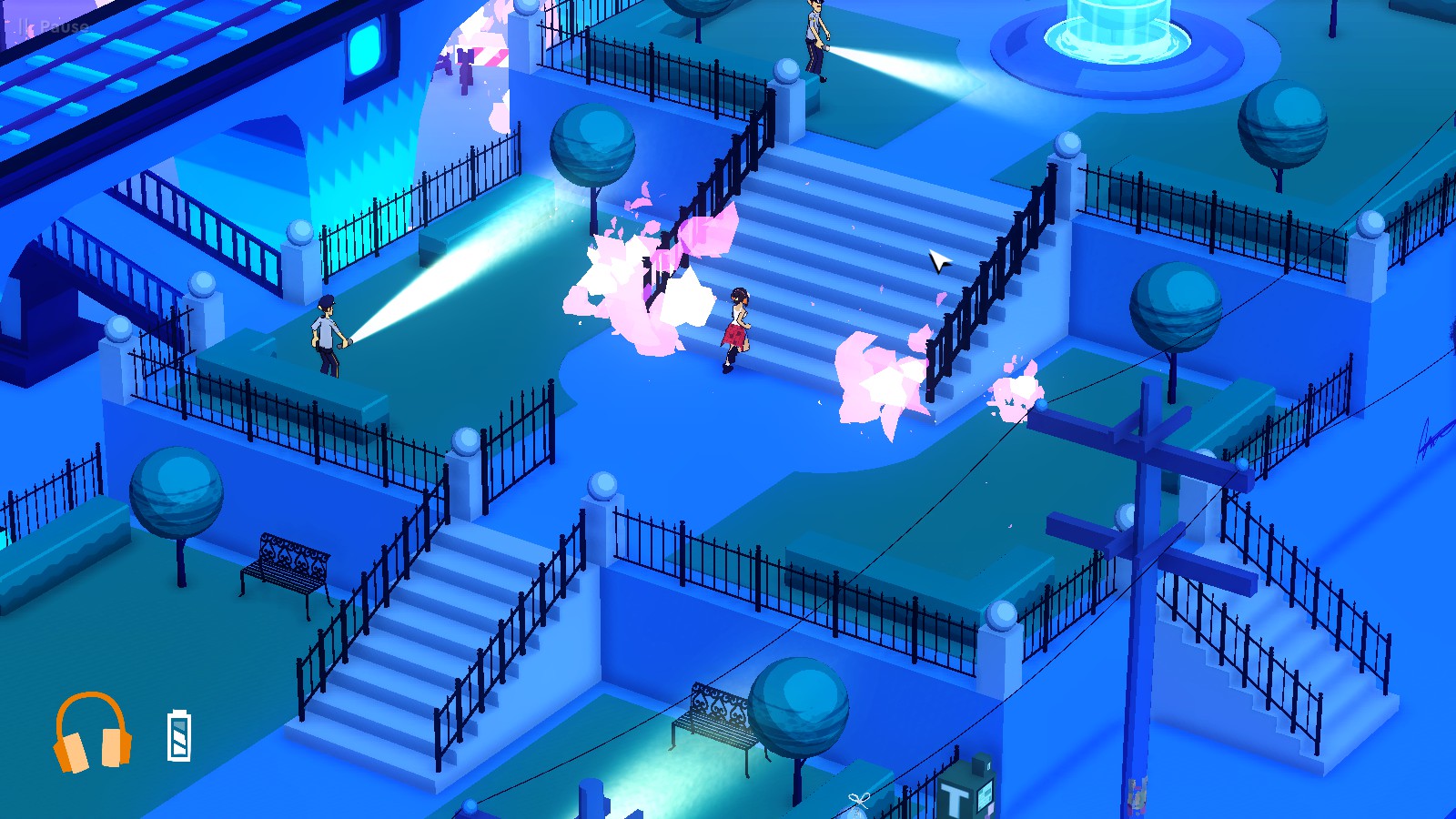 As you get into the other levels, you’ll come across another obstacles where you dodge police flashlights and get a new mechanic where listening to your music will cause certain fire spots to disappear. You do have batteries to worry about (which the music when the batteries are dying was great), but you do basically get an infinite supply. And if you do get caught or hit, you’re just rewound to right before. There are also some interactions Maya can have such as talking with some characters that live in the area, some items that seem to link to an achievement about finding Maya’s memories, and newspaper dispensers where each different one has a different headline.

The puzzles are easy, but still requires you to think about what you need to do and when. The only level I really had trouble with was the last where I didn’t realize a barrier doubled as a bridge. I had a fun time figuring out the levels and I’m a bit sad that we only got a few levels. 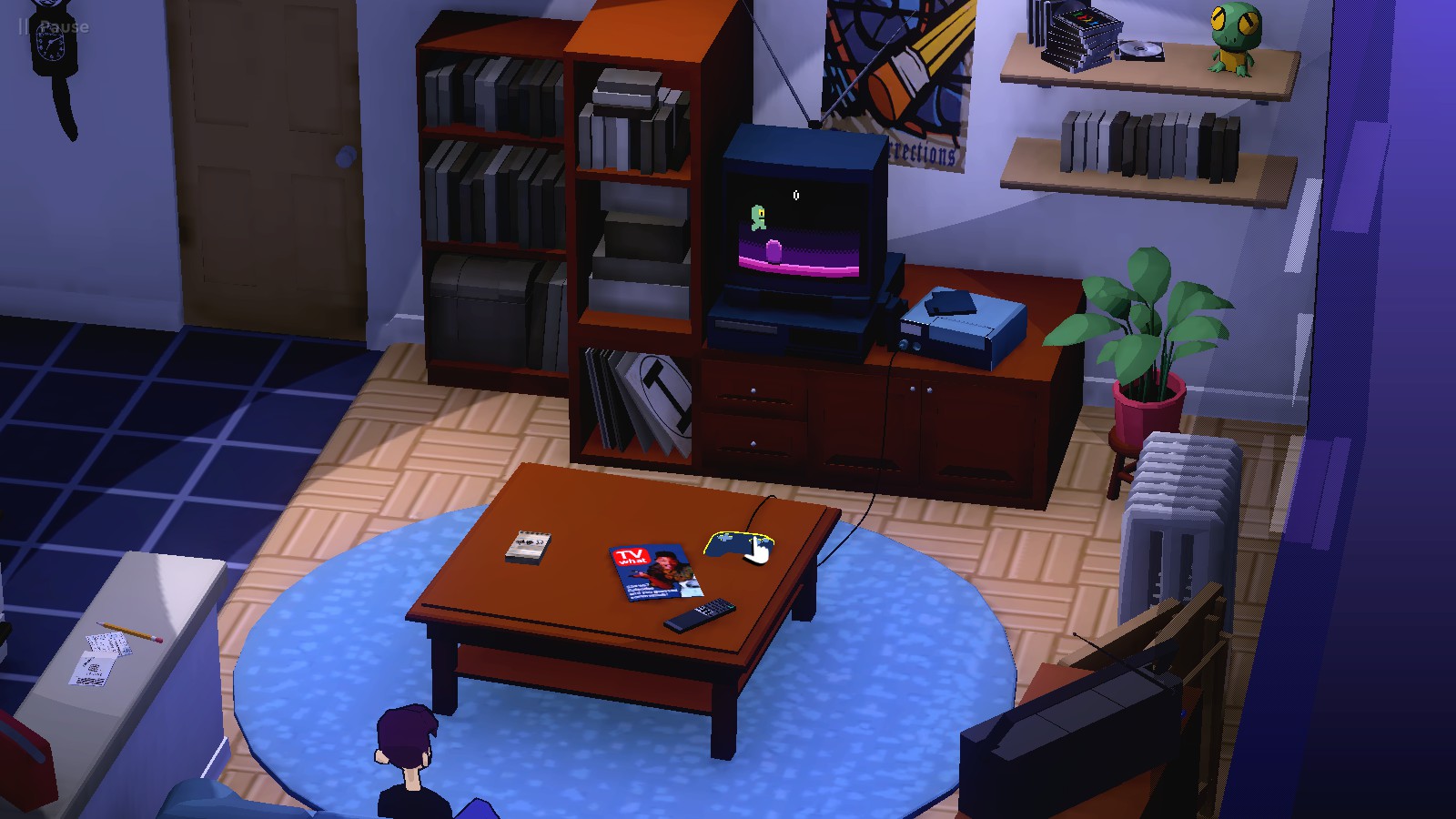 When you switch to Devin, he’s hanging out in his apartment waiting for Maya to call him from a payphone or appear at his front door. Considering Maya’s situation and how he has no idea where she could be, he can’t really go out and help (well, until he does). In his chapters, you’ll basically be examining the items in his apartment, with some having light interactions, to where he’ll say a little tidbit that gives you a window into his personality as well as his relationship with Maya. Also, some callbacks to how the 90s were. His levels were a good way to give you a break from Maya’s and a way to fill in the space where she’d be traveling to the next area, especially since his never left you away from Maya from too long.

There aren’t that many negatives Fire Tonight has, but you may run into a quick annoyance of the buildings getting in the way of your view and just wish it wasn’t so short. 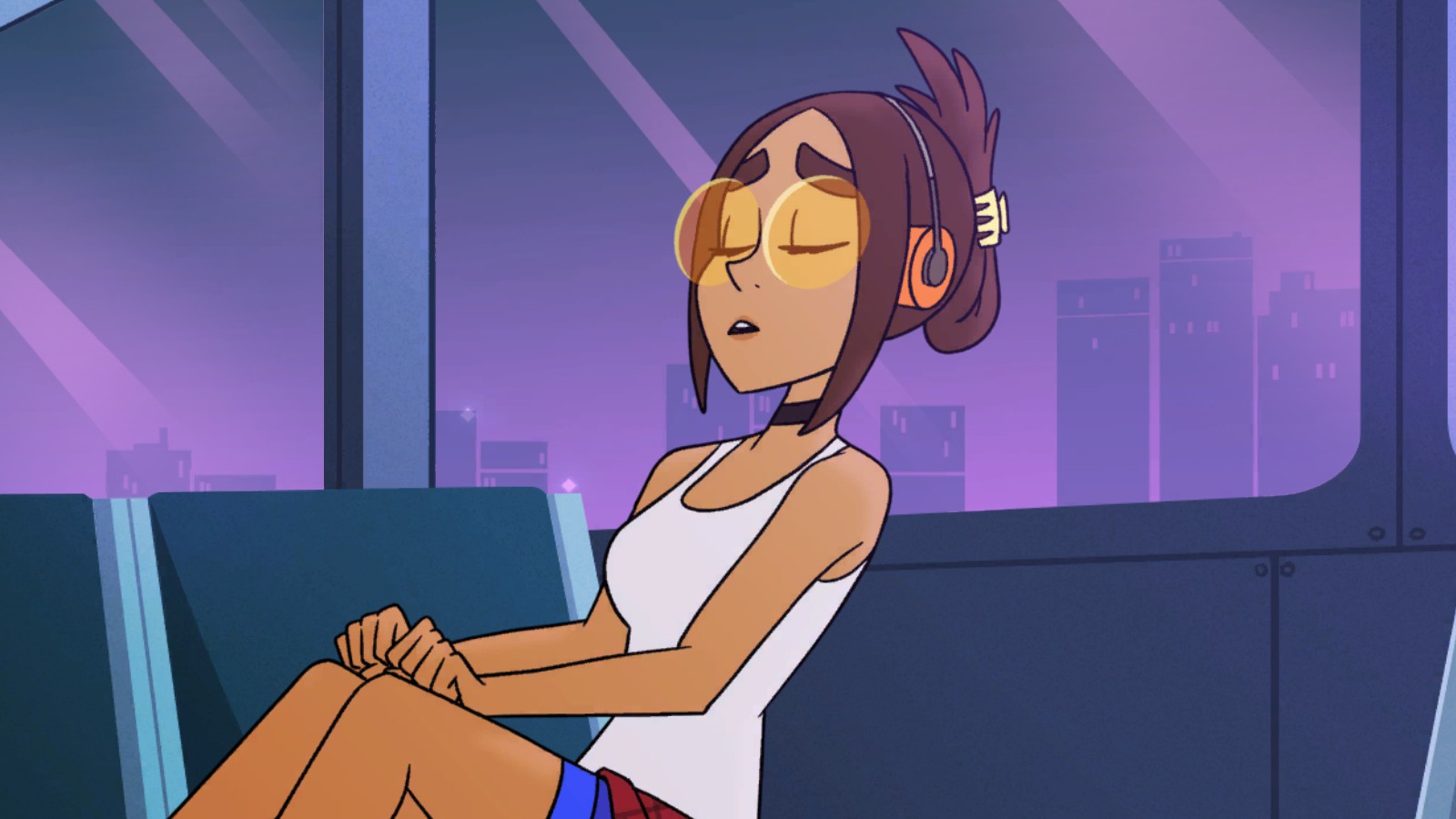 Fire Tonight is a charming short game, taking me a little bit under an hour for me to complete, that I really wish had more. I did have a feeling it would be short, but I did not expect how much I ended up liking and wanting to spend more time with Maya and Devin, more puzzle areas as I enjoyed them as much as I did when I played the demo, and I liked the interactions Maya had with her two friends you encounter and the short tidbits the other people of the town had. I also loved the art style it had, which was the very reason I was interested in the first place and we even got some surprise animations. It was also nice with the couple tributes they had to the song with the instrumental music seemingly calling back to it (at least how it sounded to me), the level select having the lyrics, and of course the game’s plot following the song.

Fire Tonight is a good game to play, either when you want a puzzle game or a quick game to pass the time, but I do wish we had more.