REVIEW: Buildings Have Feelings Too!

These buildings might have feelings easily swayed and broken like humans do, but they certainly also have some serious control and UI issues, tend to overcomplicate things, are prone to sudden outbursts of poorly worded explanations and get lost in their thoughts often.

On the surface, it’s a quaint, charming 2D city builder with anthropomorphic buildings and a rundown, old hotel as the main protagonist. But, take a shovel to it and it turns into a somewhat obtuse and fiddly puzzle game of micromanaging buildings and trying to satisfy their wants and needs in the form of upgrade requirements and appeal increases. A city builder in the traditional sense this really ain’t. 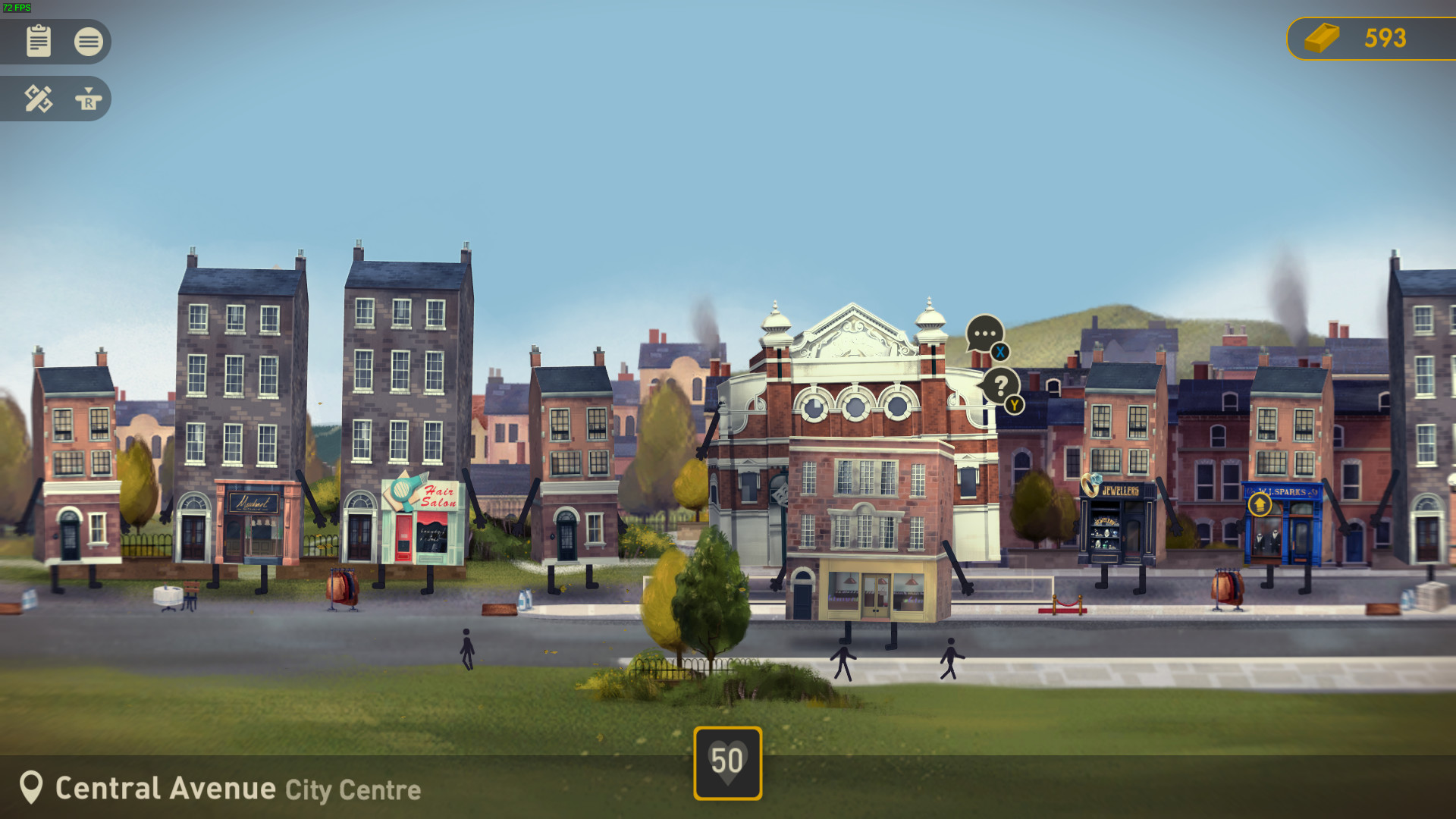 The visuals are swanky. Stately even. Buildings look like detailed cardboard cutouts with stick arms and legs. They’re beautifully animated and each one has quips and different conversations when talking to other buildings in their neighbourhood, depending what business occupies them. Backgrounds and foregrounds blend into the cutouts superbly and you can decorate the foreground where the stick people walk with different items, from park benches to bright red mailboxes. The soundtrack is a bit less chic, consisting of a monotone track that quickly loses its charm.

Form over function is, unfortunately, where Buildings excels. Puzzle game in a very light city builder seems like a novel idea at first and it would probably function well, if only the game explained its mechanics and gameplay better. Tutorial is kind of okish, but it’s very easy to get lost and confused in menus and icons. There’s no real overview of your neighbourhoods, building productions and appeals. You need to walk with your avatar so the buildings you want to check on are visible on screen. And even then, the information you get is kind of like a dilapidated building, neglected, boarded with badly organized planks and confusing to passersby.

Poor controls, even after 2 hotfixes, really don’t help much. Placing or moving buildings is done by selecting a spot and that’s occasionally harder than it looks because the selector flies all over. Good thing that you can click on any spot and then scroll. But only as far as you can see. Clicking around the Business Index that lists different buildings you’ve unlocked seems a bit unresponsive when using mouse and keyboard. Keybinds are not rebindable and seem slow and clunky in general, compared to a controller. Walking everywhere with your hotel also gets a bit tedious in the long run. 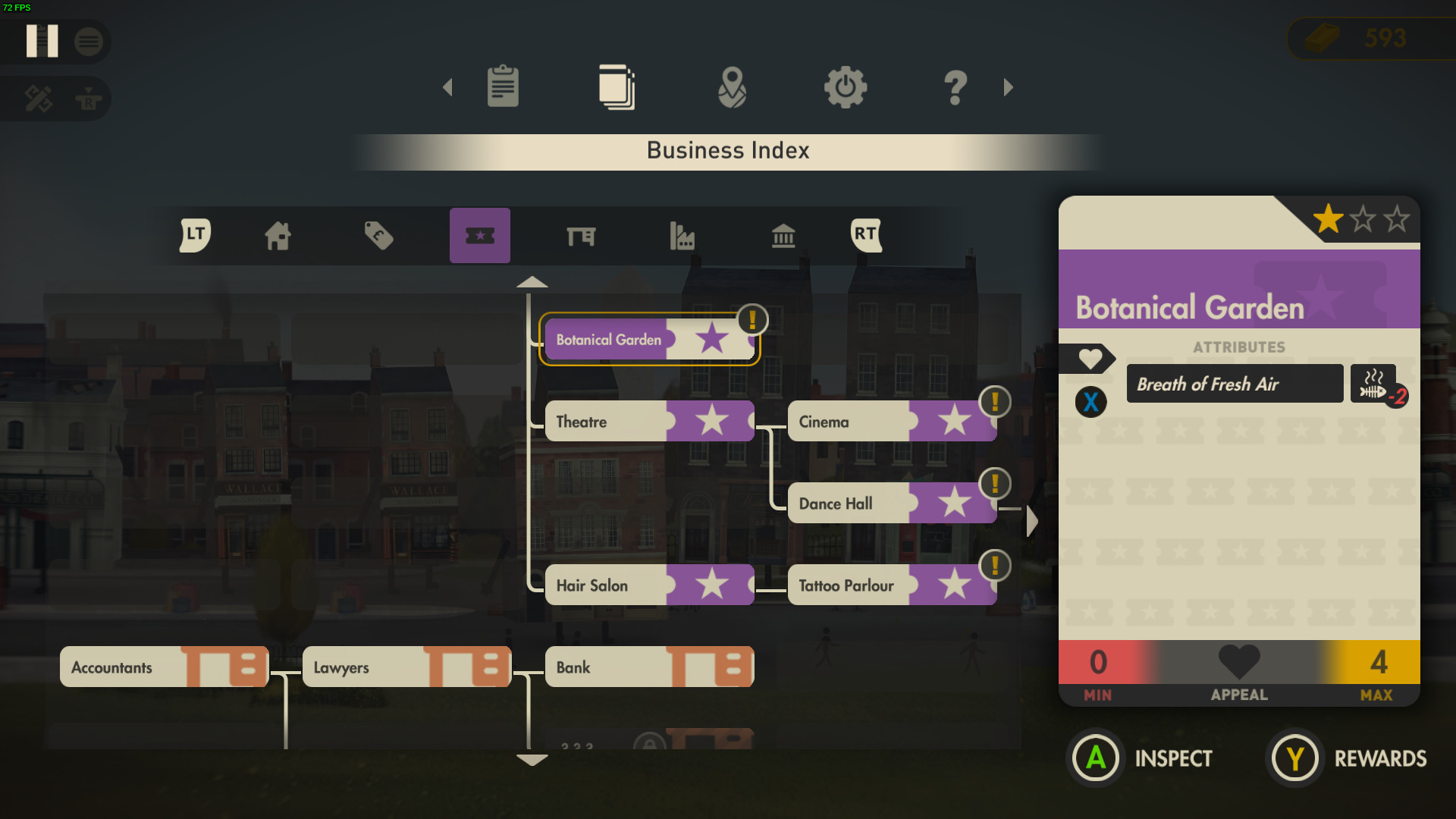 The gameplay loop consists of upgrading your buildings and satisfying their requests for cool neighbours. It gets complicated later as new buildings and new requirements are introduced. And those can get very confusing when you start balancing out more and more buildings with different requirements. Building and upgrading a bank requires tailors, mad hatters and gourmet restaurants which in turn requires posh coffee shops, accountant offices and whiskey distilleries which require sloppy pubs, greengrocers and unruly mobs that you can’t get without family housing or dirt cheap rented rooms. Only slightly exaggerated, but you get the idea. There’s also a mechanic with different bonus infrastructure cards that buildings can acquire, but that’s poorly explained as well.

Make a few mistakes in that balancing and swapping of neighbours and the buildings quickly start deteriorating and with fiddly controls, you’ll have a hard time doing things quick enough so your businesses don’t close and you’re forced to remove them and build from scratch. Couple that with bricks earned from doing tasks and upgrading buildings as your only income and you can find yourself in a bricked up situation with no way out but restarting your game. No saves for you. Only a single quicksave. 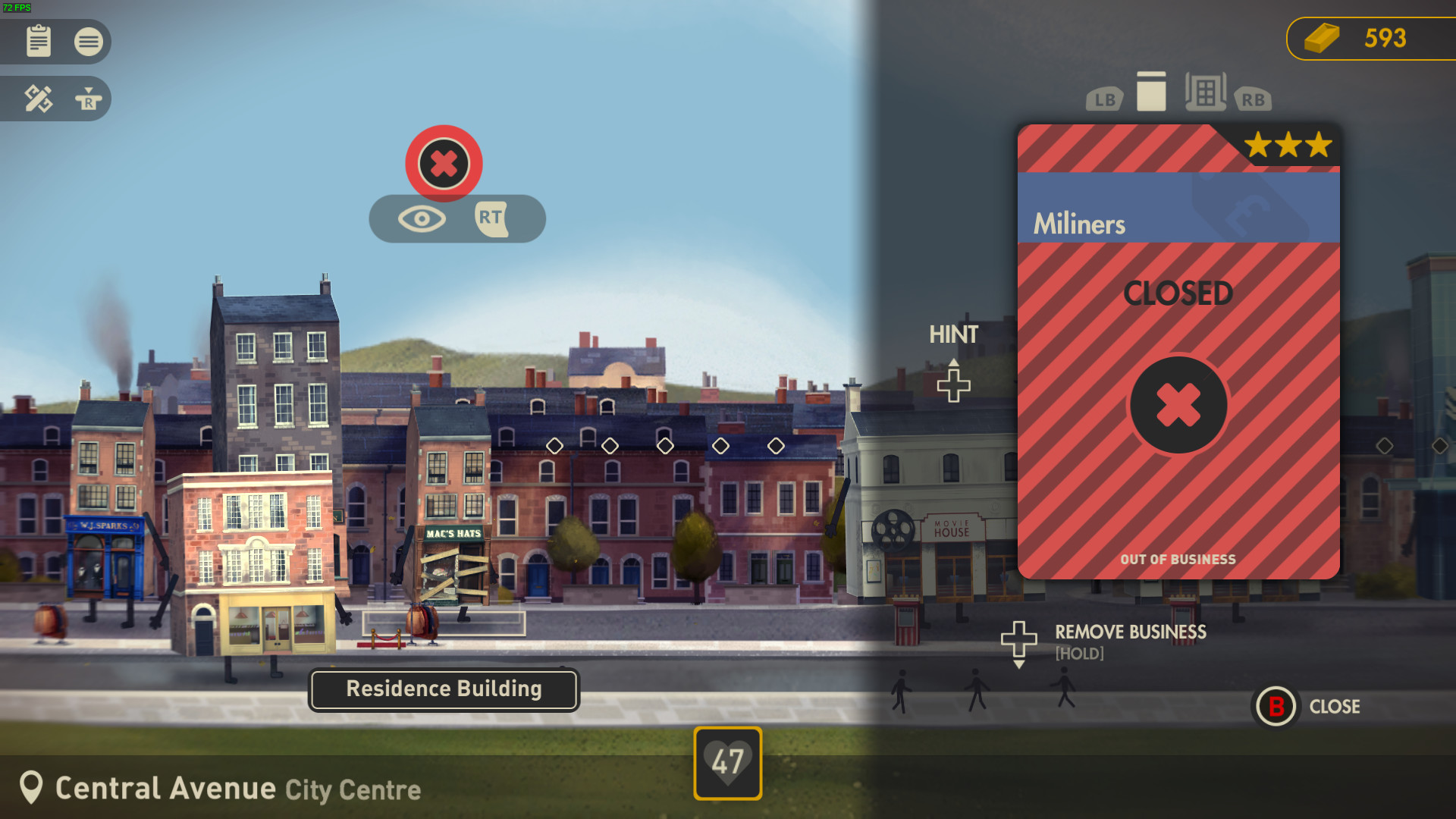 I might not be the target audience here as I was drawn to this game by its visuals and had expectations of a whimsical, no rush, eccentric light city builder with sassy buildings. I wasn’t expecting a somewhat cold-hearted, methodical puzzle game with clunky controls, confusing menus and overly needy daisy chain buildings. Perhaps a few more fixes will improve the controls more, making all the other gameplay problems slightly more tolerable. But, these neighbourhoods are not something I’d really like to revisit.