It Takes Two is nothing less than a masterpiece for the co-op genre, that delivers an extraordinary gameplay variety, along with rich visuals and a compelling story.

It Takes Two (ITT) is an experimental co-op only game set in the present times. The story is about May and Cody, a couple that has seen their relationship progressively deteriorate over time, bringing them close to divorce. This triggers deep suffering in their only daughter – so much in fact, that it awakens an unknown magical force, that transfers her parents’ consciousnesses into two animated dolls. The two will have to work together in order to regain their real bodies – and maybe, find love again along the path.

Extraordinary art direction, paired with cutting-edge graphics.
ITT manages to deliver a fairytale-inspired general setting, that branches off with diverse locations, ranging from lush forests to castle dungeons and intricate clockworks. The level of detail and care in their realization is impressive, as in some cases, entire miniature cities ripe with details, minigames (and even NPCs!) were created just for boosting immersion. Textures, effects, animations and everything else are of the highest caliber, up to par with 2021 AAA release levels.

Unbelievable gameplay variety, covering a wide array of genres.
There is no other game in my knowledge, that mashed together so many genres in a row, and successfully at that. Mainly, this title focuses on puzzles and platforming which are seen a lot during the adventure – however, each stage has several unique segments that transport players into an entirely new gameplay style: Action RPG, Shooter, Fighting, Boss Fights and much more. Such an astounding bouquet, keeps the gameplay fresh and exciting at all times.

“Friend Pass” allows another person to play the entire game, for free!
That’s right! In a time plagued with DLCs, micro-transactions, live service games and whatever other hogwash, it’s refreshing to see a developer committed to give players value for their money. Anyone who purchases the game, will be able to invite any of their friends to play along the whole adventure, for free. This can be used on multiple people even, if needed, not just once.

Very good quality voice-acting, soundtrack and effects across the board.
The acting of the two main characters is spot-on, as it feels emotional and involving at all times. Secondary characters as well sit on a solid level: there is definitely good quality work in this aspect, across the board. Music and effects that encompass each stage feel appropriate, manage to emphasize the action or scene at hand in the right ways, most of the time.

An engaging storyline, that well-mixes lighthearted moments with darker ones.
Even if ITT’s narrative takes major inspiration from fairy-tales, and has a goofy, humorous tone most of the time, it doesn’t shy away from some segments that are instead very unsettling. For instance, there will be a part where the protagonists will proceed to mutilate and dismember another character, while it’s still alive and fully sentient. These parts are all the more impressive, because of their stark contrast with the general theme. 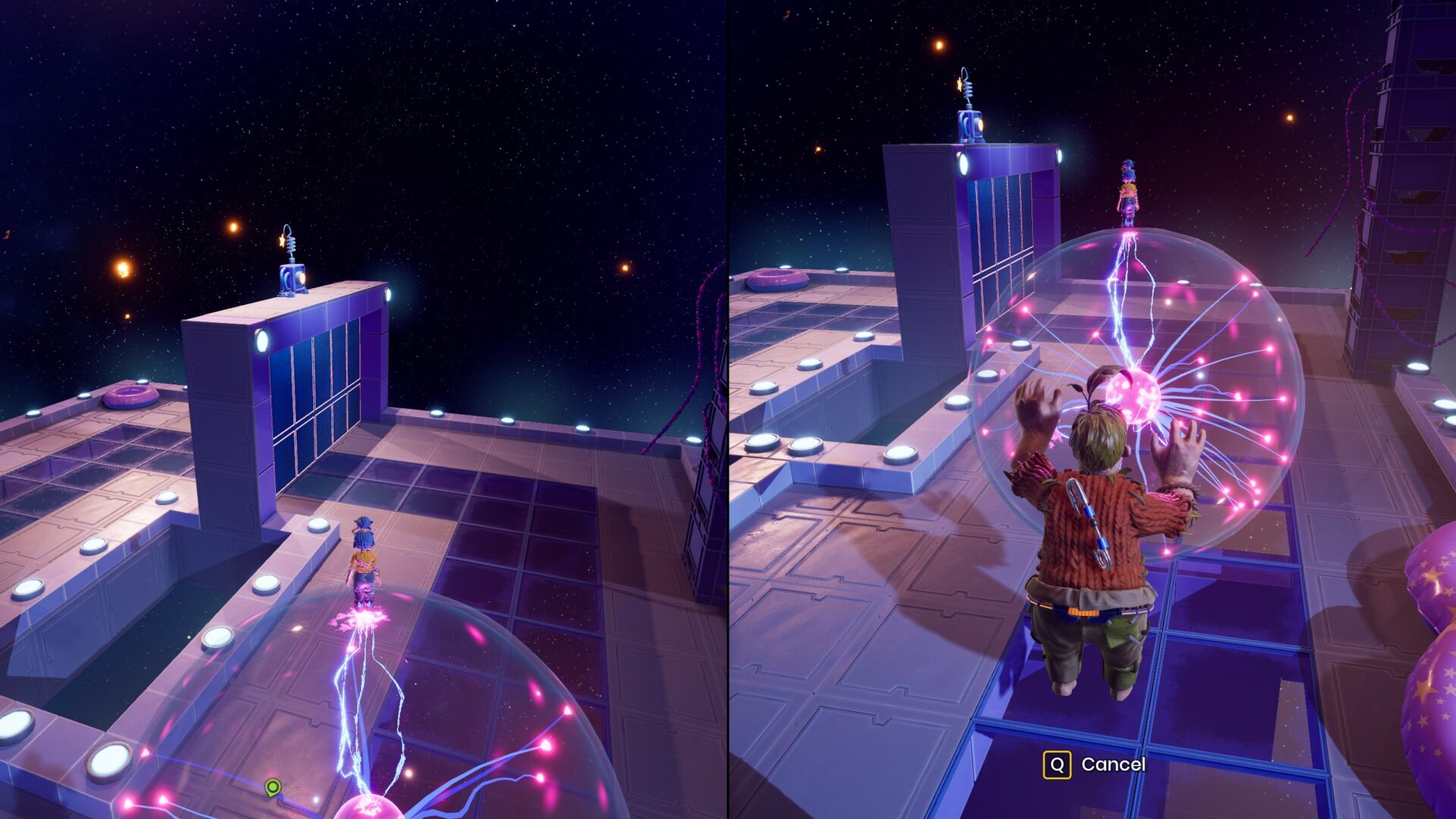 Forced split-screen view, even while playing online on separate machines.
The choice of separating the view-area in two would be understandable, for local matches on the same computer – however it proves bizarre for online ones on two separate machines. Even if it is helpful to look in the other player’s screen (sometimes), that’s never a mandatory mechanic, so ultimately ITT could do without the screen-splitting. Especially on smaller monitors like the ones of laptops, the size reduction certainly could prove uncomfortable. 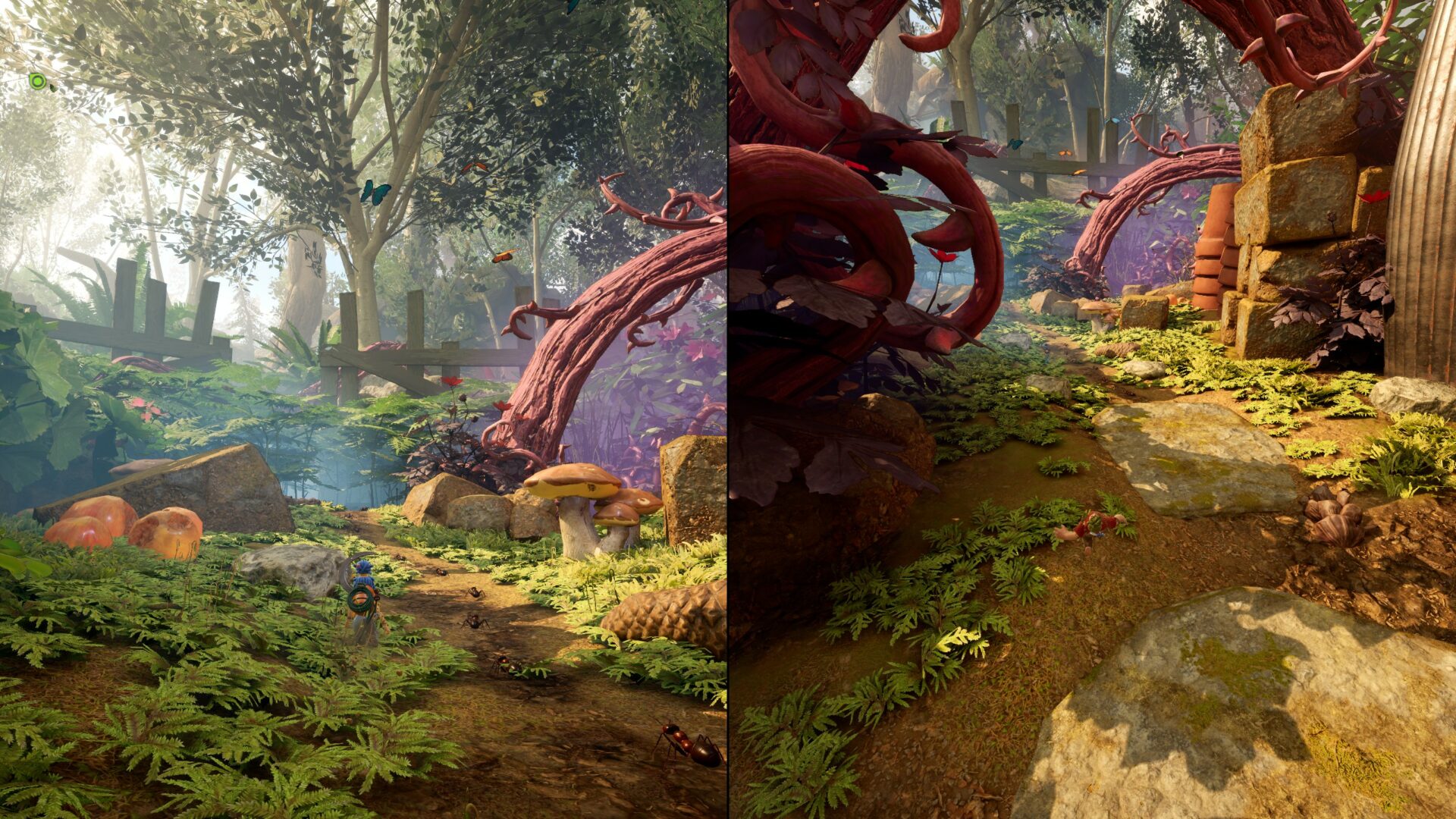 My usual Gameplay Breakdown cannot be applied to It Takes Two, as it mixes-and-matches so many genres, making a full breakdown of each would prove nigh impossible, other than a spoiler as well.

As main genres, ITT puts high emphasis on Platformer and Puzzle Game: in each stage, there will be multiple obstacle courses that often will need the combination of the two players’ different tools or powers, in order to overcome them. The difficulty curve of such enigmas and platforming sections gently soars, first to accustom players to the new mechanics, and then leaving them free to use them at their full potential. However do not expect a hardcore challenge, as the game is more oriented towards an average / casual audience – which is fine, as it’s not *too* easy, anyway.

Secondary genres vary for each level, and in many cases they are unique, non-repeating sections with their own, specific gameplay mechanics. For instance, one of them will have players being able to manipulate their body size and gravity respectively, while another one will see Cody pilot an aircraft while May mans the turret to fend off attackers. Multiply cases like this for the totality of the game’s duration, and the result is amazing variety.

Minigames are found throughout the adventure, and put Cody and May against each other in small, competitive-oriented challenges. Also in this case, each minigame is unique and original, can be replayed unlimited times, and some of them will even change or become more difficult as the rounds go on. Winning or losing them doesn’t give anything to the victor, they’re just for fun’s sake, a diversion. Certain side activities though, have unique achievements related to them.

Sure, players can die during a boss fight, a platforming section, or any of the unique combat-oriented ones – although a game over only triggers when both are dead at the same time: the blessing of immortality allows both to quickly resurrect if defeated. Checkpoints are anyway very frequent and forgiving, even boss fights will checkpoint at every new phase’s start, so losing progress in a frustrating way is not an issue. 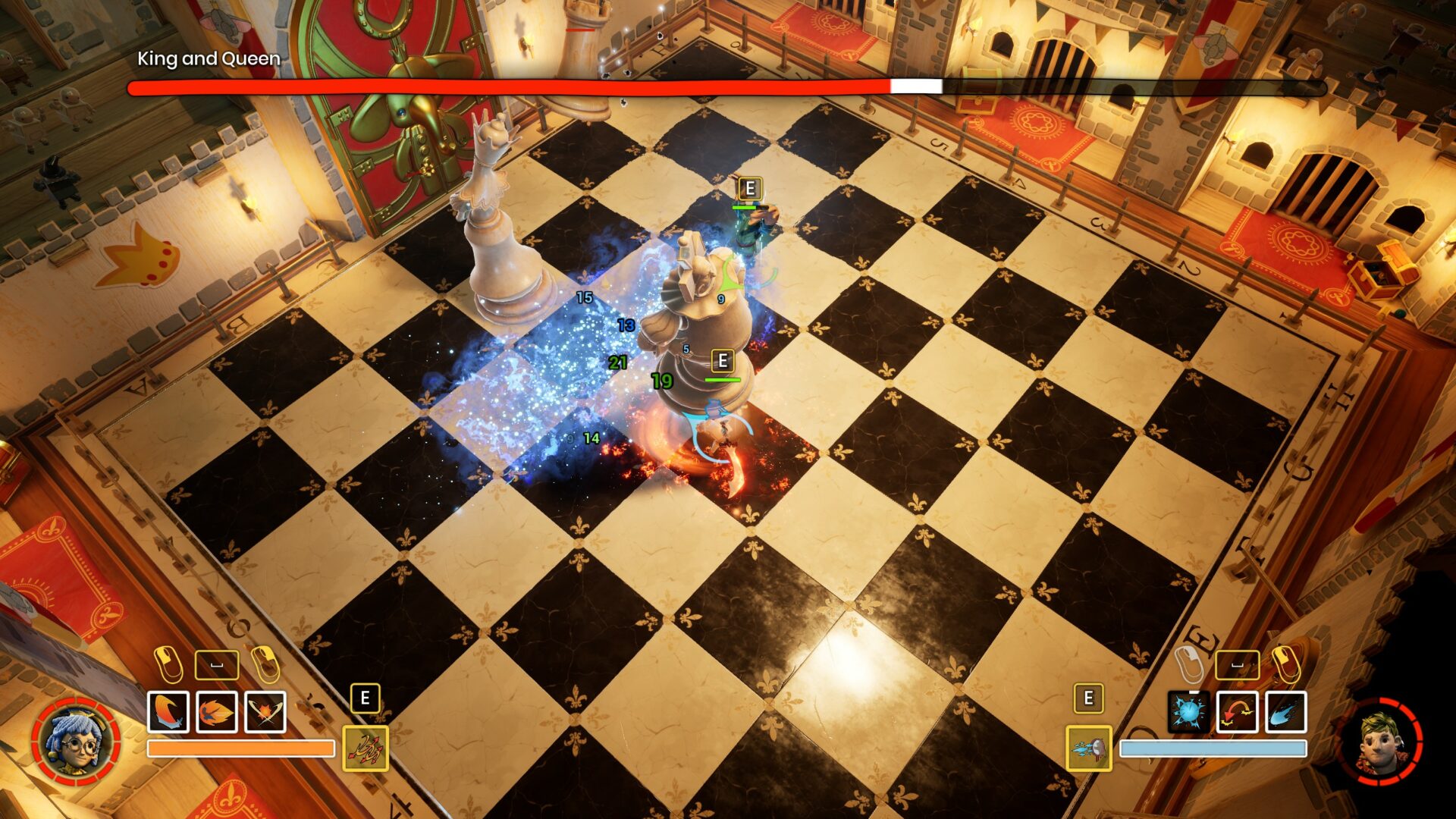 – Mandatory use of Origin client, even if purchased on Steam.
– Certain animations result janky and prone to visual glitches.

It takes anywhere between 9-12 hours to complete the game, depending on number of deaths, time taken to figure puzzles and quantity of secondary content cleared. The replay value is pretty good, considering both players can replay ITT using the other characters, to see the adventure from another perspective. Considering the Friend Pass and the exceptional overall quality, the price of 40€ is totally fair, and I can recommend buying for full price.