Info to Get Started

Overall experience:
Quite awkward and tiring

The protagonist of this story is a college freshman who just moved to a new city with his foster family. Initially he settles down in his new location with no problems. Unfortunately it doesn’t take long until he’s dragged into a dangerous reality hidden right under everyone’s noses. The main story is not completed yet, but the game already has 10 hours of content.

While dialogues use common language, the sheer amount of text is overwhelming. This issue is so prominent that it makes the story much less engaging. As of now however some interactions lack context, even if they seem promising.
The relationship build-up follows a somewhat realistic pace. The issues tied to the taboo of certain interactions are being highlighted, but then again this is contrasted by very bold advances as soon as the opportunity arises.
Moreover it is interesting to see how different characters have their own way with words and their personalities are very nicely built and defined with this mean.

There are some humorous references to other franchises, such as a peculiar shady salesman grunkle reincarnation.

As of now all the routes can be completed within the same game. This means there are three long sidestories and a few incomplete ones the player can go for. Some of them are simply scenes the player can purchase with ingame currency.

The game is a visual novel with a twist.

Most playtime consists in a high amount of dialogues, some of which provide the player with a choice. There are some choices that can influence the relationships with townsfolk, that can go up to 10 points. It is however not disclosed to the player whether an action will require ability points or not until they select it. Unless any kind of cutscene took place, the player can go backwards with the mouse scroll to reread the dialogues or select a different option until they’re satisfied with the results.

Each skill training can be only attempted once a day and at an appropriate daytime. Time passes by, no matter if the training is successful or not. There are three different training levels to be selected according to the current skill maximum capacity.
What the ability value defines is a gauge that recharges in the morning. The recharge rate is based on an item purchasable at the mall.

The story advancement is often interrupted by cumbersome requirements. This means the player will have to pass several game days pretty much only leveling up skills or for example getting money in order to access an event.
The overall progress can be very slow because of the combination of the elevate number of text and skill requisite walls.

An in-game day is divided in the morning, afternoon, evening and night. Most actions are only available in the morning and afternoon, with a different set of activities reserved for the evening. The night is there only for seldom story interactions.

A few scenes are fully unskippable, while most when pressing “skip” are simply accelerated.
After the VR set is bought and modified by an NPC it is possible to replay all the spicy bits.

Another extra feature that could sweeten up the deal is the possibility to rename all the family members. The names in my screenshots are custom. 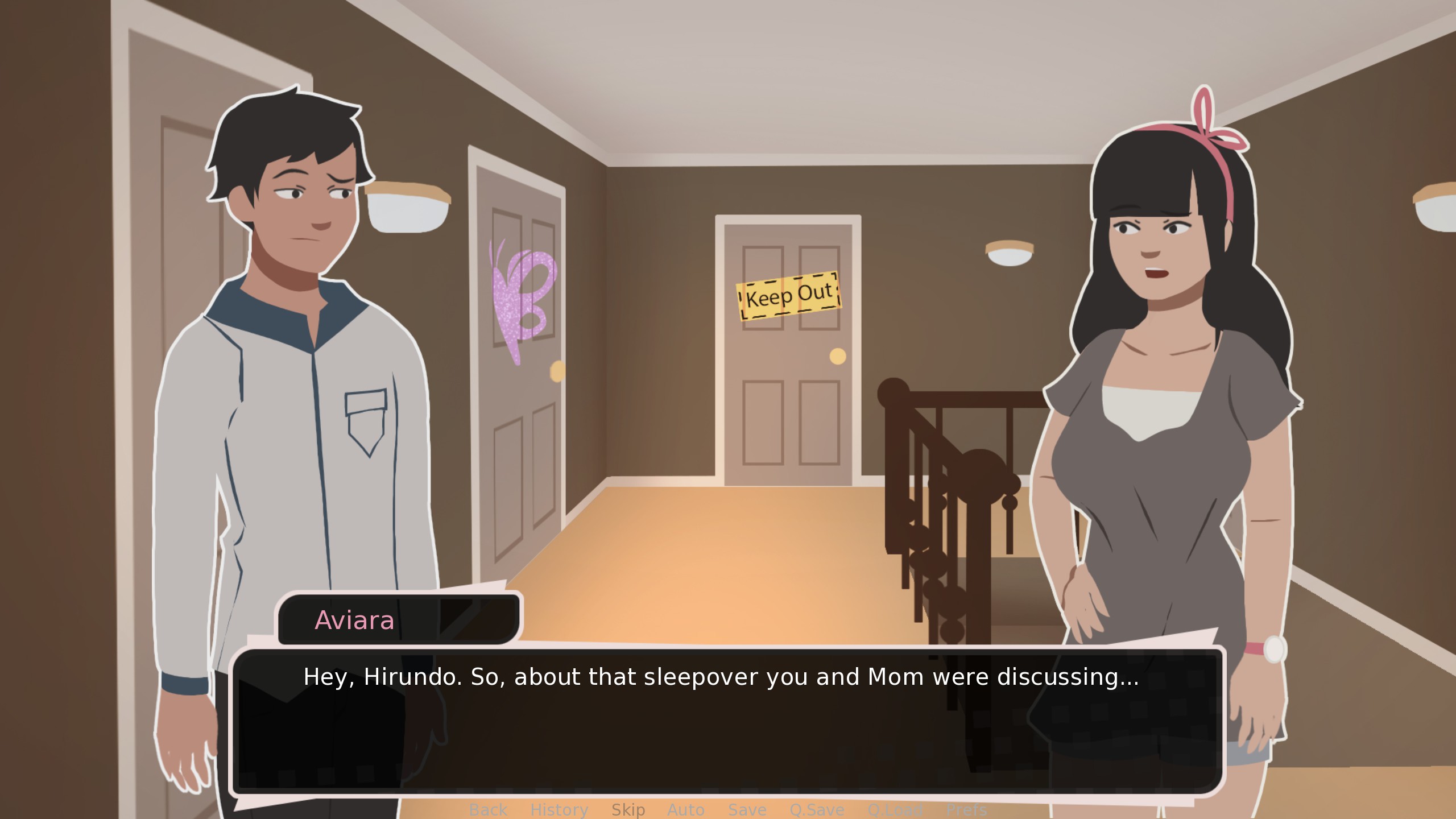 The user interface overall is helpful. There is a list of all the characters with their portraits and relationship points.
There is also a tracker for all the routes that have been started, however it’s a bit impractical. Only one storyline can be displayed at a time and to change it the player has to go through all of them until they find the one they’re interested in.
Shop interface is not user friendly, as it feels really dispersive to have an option for every three items in stock.

The overall artstyle of the game is very cartoony, with flat color surfaces and lacking details. In more instances hands lack definition of individual fingers, which makes it look a bit goofy and weird.

There is a possibility to switch on and off the x-ray vision during intercourse. As per usual the anatomy of the x-ray can get a bit questionable.

It contains a lot of fake incest, as both the adoptive sister and adoptive mom are dateable characters.

There are some instances of public nudity and sexual acts, including a nudist beach in the city.

Something to consider is that the protagonist has an abnormally big liquid production, as it reflects on almost all the intimate moments in this game.

Since the game is still a work in progress there are some animations that are missing or incomplete, with some sequences still in rough sketch phase.

Music only accompanies some of the parts of the game and while clicking anything on the map it stops and restarts.

When scrolling back during an adult scene, it is possible to get stuck in an eternal loop and have no other choice but to reload. It’s my first time experiencing this kind of bug in a visual novel.

First of all this is certainly not the right choice for those who’d count on skipping the majority of text and just getting to the juicy parts. The walls ask to get certain skills up to specific levels and to gain items dedicating whole weeks almost exclusively to that activity. There are hours and hours of dialogues and grinding for the skills is very repetitive and time consuming since a successful training result is not guaranteed.

All of this to continue with the main or side stories, but the player will very likely lose interest by the time the requisites are satisfied.
To me this game just doesn’t feel fulfilling. I was also quite perplexed by some mature segments and I wish I could have skipped those, but it wasn’t always possible.

REVIEW: Where The Heart Leads (PS4)