REVIEW: Unto The End
2 comments
Share:TwitterFacebookRedditPinterestWhatsAppEmail

REVIEW: Unto The End

Unto The End (UTE) is a single-player fantasy adventure focused on melee combat, exploration and interaction diversity. Players impersonate “The Father”, that chooses to depart for a perilous journey across the ice-encrusted mountains, snowy valleys and dark caverns of the region. The protagonist’s travels will be harsh: local inhabitants don’t react kindly to visitors, with treacherous terrain and scarcity of resources on top of that. In an untamed land full of different cultures and opportunities, Father’s journey will prove to be more than mere survival as his actions will determine the fate of many, including himself.

A voyage unlike any other
UTE delivers a unique gameplay concept that blends meaningful exploration, survival elements and interactions in a solid way. More often than not, there are several ways to circumvent a fight or convince the opponent of Father’s neutrality – rather than powering through with force. Such alternatives are often left to intuition and not obvious to figure out… however they may alter the flow of the story and even the ending, other than award the protagonist with unique items or resources. One will have to replay the game several times to see everything, with achievements to match.

The way of the Blade
The combat system of this title stands out not only as original, but also highly challenging. Armed only with his trusty sword, a carved dagger and his wits, Father will face opponents often bigger, faster, stronger, more experienced than him at every turn. Each (potential) enemy encountered has unique behaviors and patterns, with very few repetitions across the board, while the system itself focuses on timing, pattern learning and smart use of all resources to make it out alive. The entire concept revolves around learning through many gruesome deaths, until Father is victorious. PREPARE TO DIE.

Acts say more than a thousand words
The game’s story may evolve in diverse ways depending on Father’s actions, paths taken and selfless (or selfish) choices made throughout the adventure. Using a non-verbal, indirect style of narration that suits well the atmosphere and concept, environment elements and sound clues are to be deducted often to understand what needs to be done. Successfully interpreting these cues opens up entirely new events, which ultimately reward Father with less hardships and more resources to spare, other than changing NPC behaviors towards him.

The right kind of frustration
Unlike many other “skill based” titles, UTE doesn’t prove to be frustrating in a “bad way” despite the very high combat difficulty. This is the result of near flawless checkpoint placement which saves before and after each fight or dangerous section… but there are conditions for this to happen. Players exiting a fight heavily wounded or with enemies still after them will be denied such boon: as consequence the careless, unprepared and hasty will be punished with bigger loss of progress if death ensues. Shiny, but could be shinier
Even with the core mechanics working well and generally a good level of polishing, this title still has several minor and a few more remarkable issues to iron out. For instance, certain enemies may be able to block Father’s attacks even while knocked down after a bash, or in other occasions the save system may save an incorrect world state. These are just a couple examples of issues that while never game-breaking, can influence the experience negatively although not in a major way. 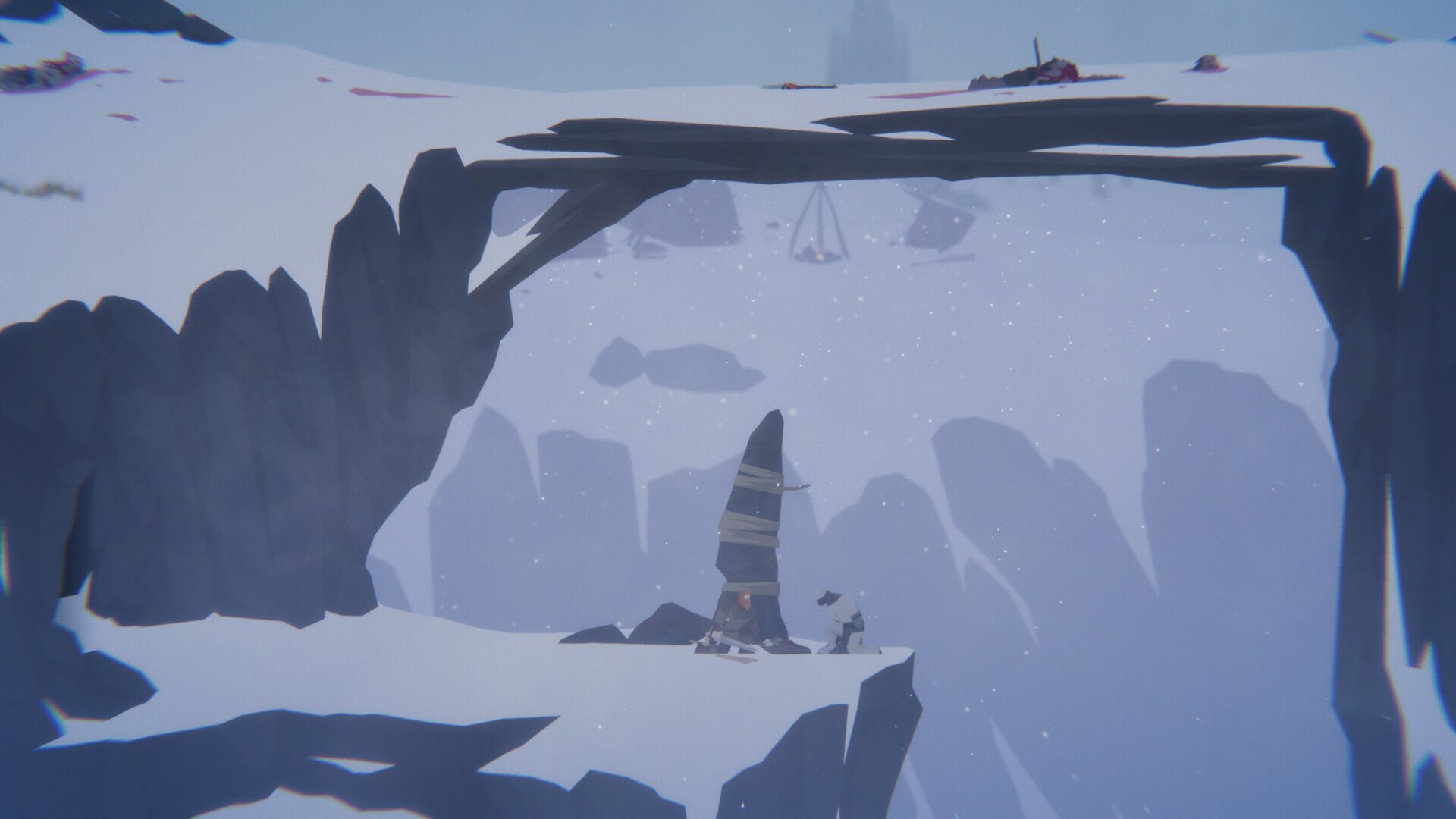 Exploration
Is performed on foot, through the hazardous terrain of the mountainous region where UTE is set. Ranging from caverns to icy cliffs and snowy paths, the environments proposed are not that varied but well done. While exploring, Father can loot resources from certain scene elements such as piles of twigs, corpses or dead animals – this is very important to keep the protagonist stocked at all times, as running out of supplies (especially Herbs) often proves lethal. There are many secret areas and divergent paths in each location, often hidden or less obvious to reach.

These places may contain more resources, easier shortcuts, or even unique items that can impact Father’s combat proficiency or allow hidden interactions. Most characters encountered are at first neutral, and depending on the player’s past and current actions they may turn hostile or leave peacefully. Level design is linear as several places have one-way drops, autosaves happen often but can be overridden by sitting at campfires, found sparingly, to also heal and craft better equipment if possible.

Combat
Is highly skill-based, and uses an original system comprising Dodge rolls in a souls style, Feints to mislead the enemy, Directional Blocks (High and Low) to counter enemy attacks, Bashing to knock enemies down, and Throwing a single dagger to stun and damage the opponent. Enemies are often fast, highly lethal (most 1-2 shot) and even appear in multiple numbers in some occasions. Using the right tactic at the right moment is essential, as each enemy is never the same so the strategy that carried Father up to a certain progress may not be successful with the next foe.

Even victory sometimes doesn’t end the struggle. Bleeding wounds can still kill players if they happen to not have the necessary healing supplies to hold on until the next Bonfire is found: this results in losing progress all the way back before the last fight, and is a way to tell players “you won, but didn’t do well enough and were unprepared”.

Character Management
Is performed via an inventory menu holding resources and unique items alike. Some of such items can be used in specific occasions (for the player to understand) in order to gain an advantage or avoid conflict. The quick crafting menu allows igniting and making Torches to light the way, while also a single Dagger to throw if the previous one was lost. At Bonfires, players have extended crafting options, as a Tonic Flask can be brewed to heal all wounds on the go, while existing ones can be healed for free there. Armor can be improved with materials, however it will degrade and break over time, requiring more maintenance but also making Father more resilient. 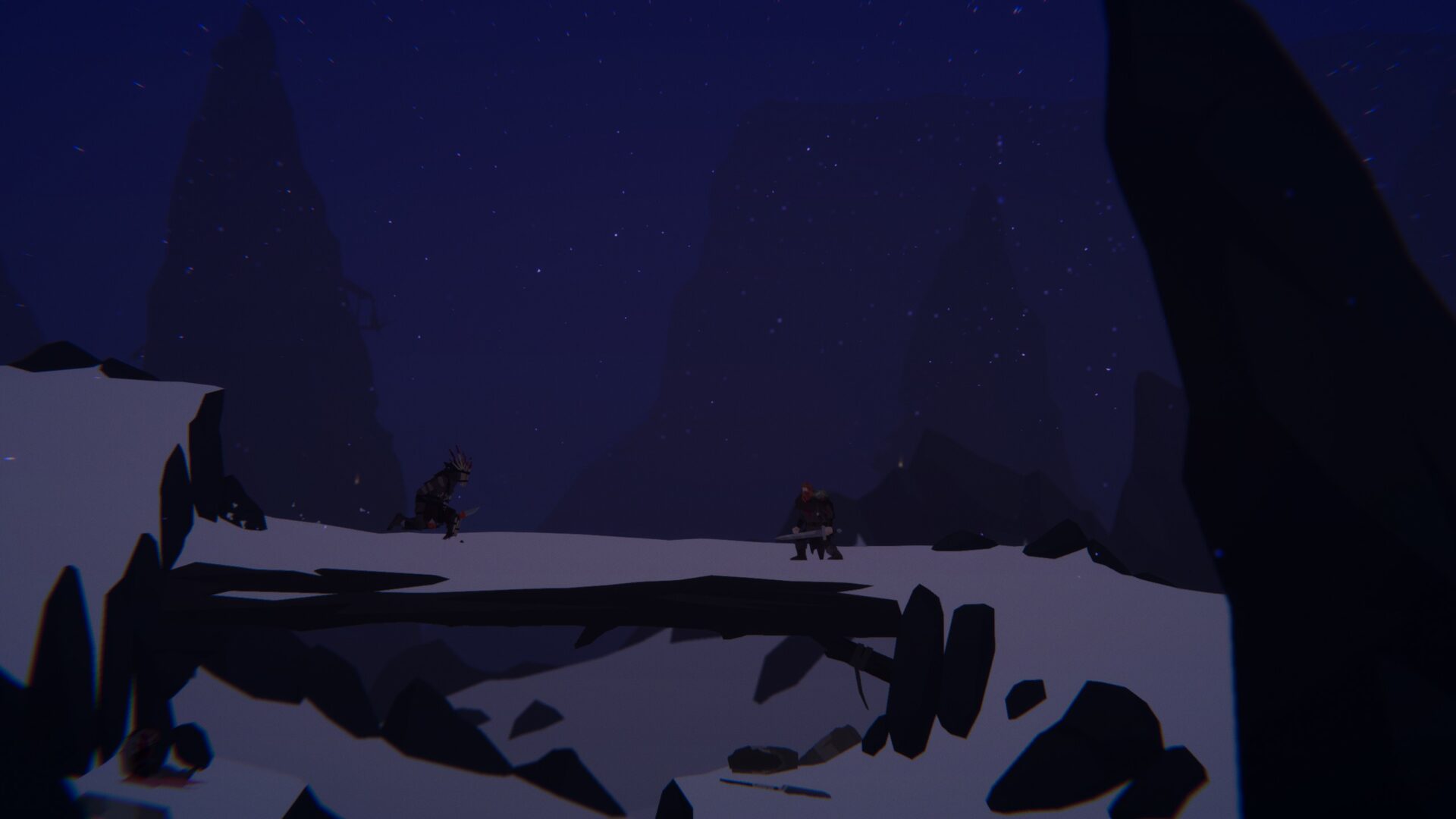 Unto The End proves to be a side-scrolling adventure game, that goes beyond the canons set in place by similar titles with an original gameplay system not seen before anywhere else. The challenge delivered by combat is high but always fair, while the exploration, interaction and survival elements perfectly integrate themselves with each other, without any of them being predominant. Only the presence of some bugs and issues prevents this title from truly achieving a near-perfect state. Recommended without doubts to adventure fans that do not shy from a great challenge.