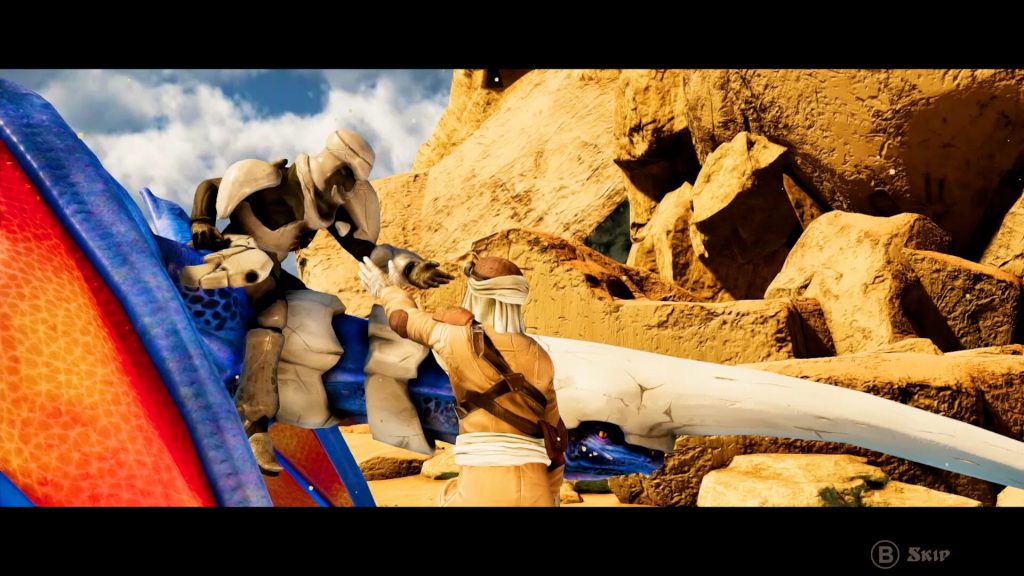 The basic premise is that the world is in a post-apocalyptic time after a huge high-tech war with humanity in dire straits. The empire found a remnant of that lost technology in form of a tower and utilizes that power to conquer the world.
The protagonist has a fateful encounter with Solo Wing and its rider who gets entangled in a deadly fight with the Dark Dragon (Proto Dragon). Unfortunately, the fight ended fatal for Solo Wings rider who passes on his his mission onto the protagonist to save the world.
From that moment on it becomes a race against time to get to the tower before the Empire utilizes its technology or the Dark Dragon reaching it for its own purposes.

The game was and still is a unique Arcade on-rails Shooter in the veins of Space Harrier and Star Fox but with a unique take. It’s a 360° shooter where you fight off enemies on all sides but there’s a bit more to it.
Each stage starts with a full life that can take quite a few hits but there’s no option to replenish it. It’s your allowance for errors. When it’s empty you have to restart the stage with no exception. Mastery is a major part of the experience like in many classic arcade games.

First off, there are buttons to quick swerve your view by 90° and if you push both you get a quick view of your back. While you are looking in front, you can move the dragon to dodge incoming attacks or obstacles but there’s a catch. The dragon is big and sometimes it blocks your view of incoming attacks.
The meat and potatoes lie in utilizing the two different attacks: Normal Shot and Lock-On Laser. 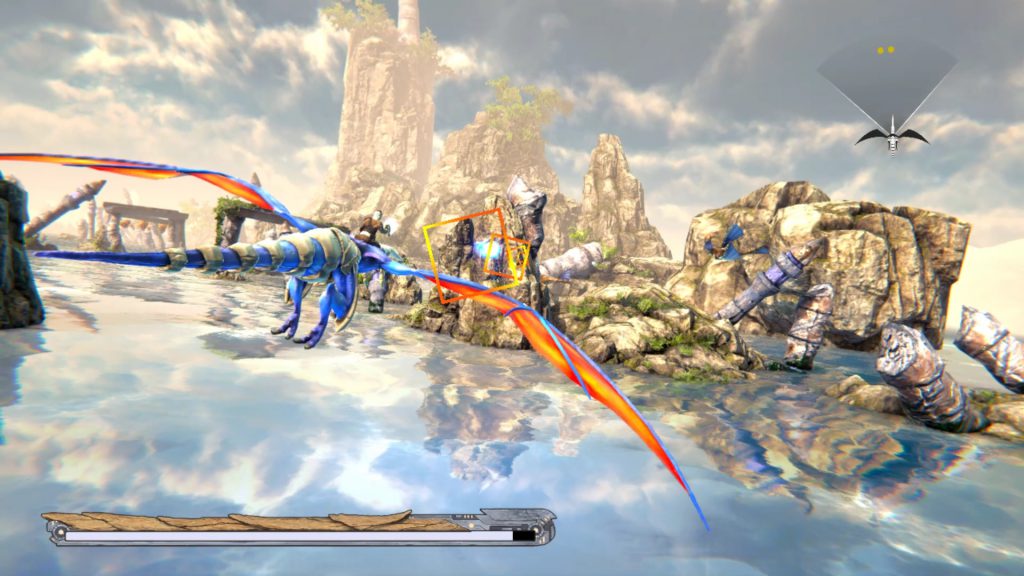 Also known as the shots that come from the rider’s gun. They do little damage but it can fire as fast as you can push the button. If you’re one of the few capable of Rapid Fire there’s a good chance that this gives you the best DPS but the real purpose of it is to deflect incoming attacks and destroy obstacles. 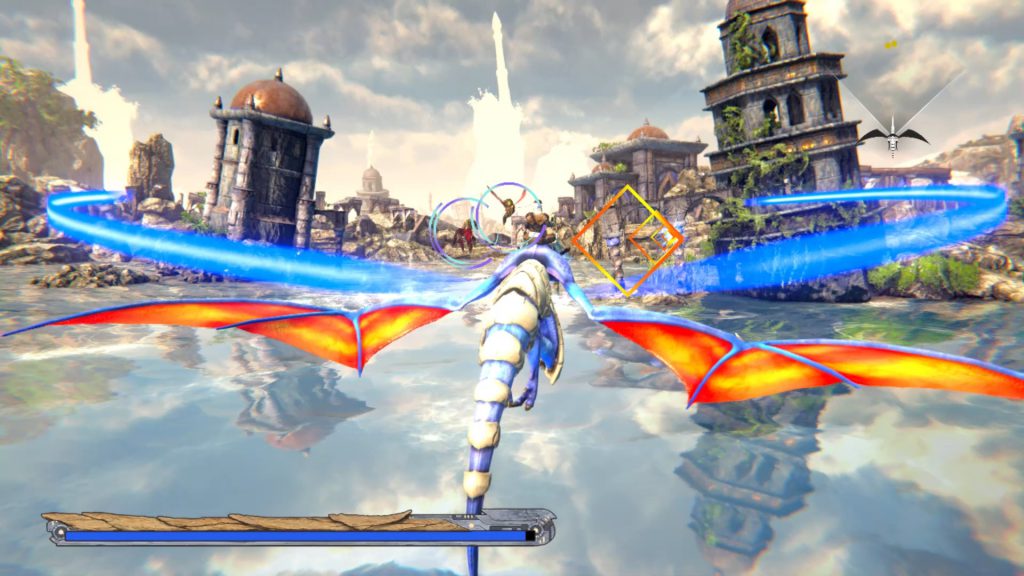 Your main source of damage and mode of attack. By holding onto the attack button you’ll charge up your Lock-On Laser. After a short moment, it locks onto everything you move your reticle over.
It one-shots small enemies, while bigger ones have multiple lock-on points to dish out more damage against a single enemy.
There are times you’ll have to unleash multiple salvos before they go down. Optimizing your shootdown sequence is going to play a role in your performance. 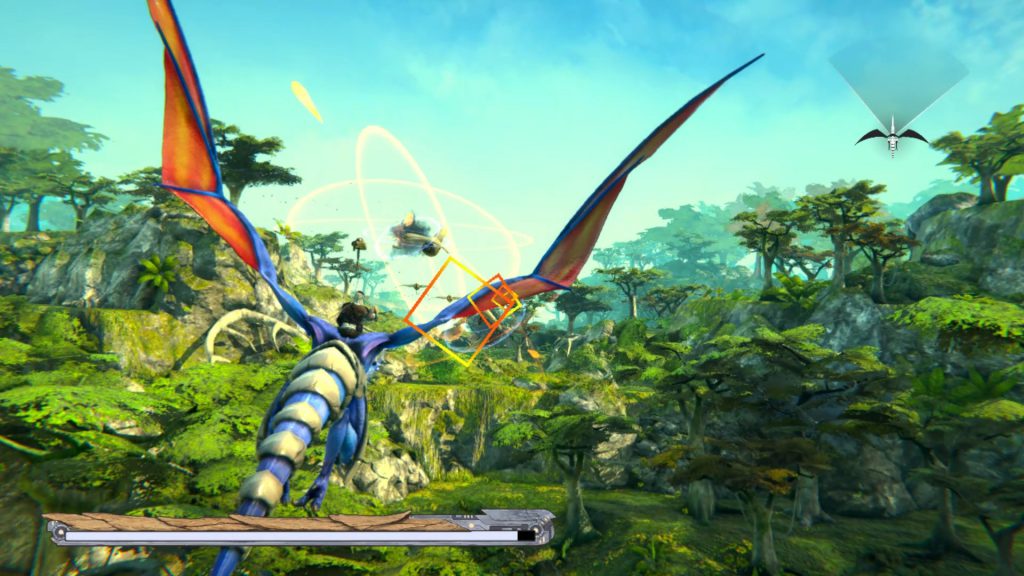 Just like the original, there is a visual variety in stages going from sunken cities, dunes, and a few more. They are all built to ease you into the game as it becomes progressively more difficult.
In select stages, you’ll not only find enemies but also dangerous obstacles for a change of pace.
It starts with small single hit enemies in the beginning and continues to ramp it up going with stronger and more enemies.
At first, you don’t need to dodge because you can shoot them down before they even attack if you’re quick. Then comes the stronger multi-hit enemies that pressure you as they swarm you from all sides.
After finishing the stage, a score shows your performance. Perfectionists know what’s up.

Enemies
They come in all forms and sizes to give you a nice amount of variety. Many of them are just there for a limited time to put pressure on you and unload their shots. You can deflect most attacks that are coming at you with your handgun but there are things like lasers where the only solution is dodging.
Enemies change with the stages and come with unique patterns. Like worms that are only vulnerable when they are jumping and are above the ground.
One minor annoyance could be the fact that enemies can be seen from far away but can’t be attacked until they are close enough. 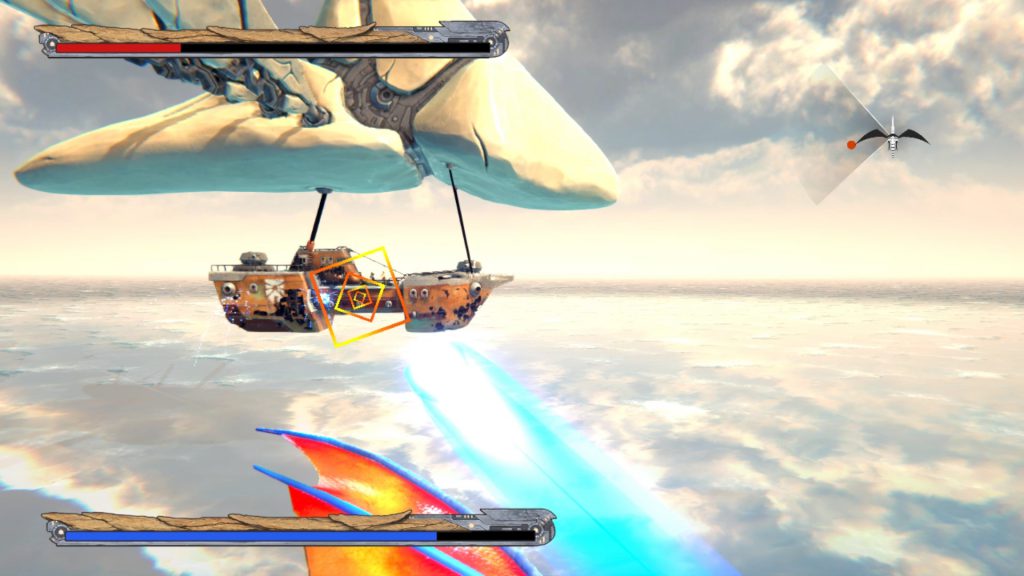 While many of them are looking quite dangerous, I think most of them are paper tigers. On normal, they didn’t appear that dangerous because their attacks are slow enough to dodge in spades.
Nevertheless, they are the most unique part of the experience as they have their quirks where you try to fly around them to finish off their parts. Another one even defies the M.O. of the game by neutralizing your lasers, forcing you to resort to the handgun.
It’s been a very long time since I played the original Panzer Dragoon but I’m very sure this Remake is easier because I remember seeing the Game Over screen a ton of times. Unlike here where I only lost once or twice at most because of a difficulty spike in a stage.

Content and Replayability
So with all said and done, we’re looking at less than 10 stages with each clocking around 10 Minutes at best. It doesn’t take more than an hour to finish a complete run from beginning to end including the rare cutscenes. At the end of the playthrough awaits the secret code to unlock Pandora’s Box. A special menu that offers stage select and the option for Autofire.
Achievement Hunters can find additional playtime that forces them to comply with house rules like not using the lock-on lasers. 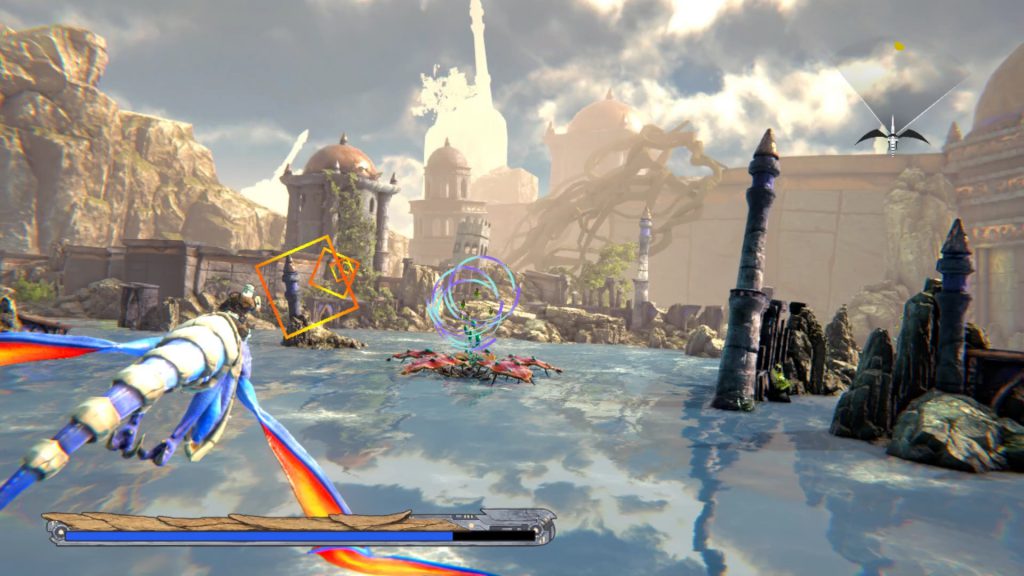 Back then Panzer Dragoon was a graphical powerhouse to show off the Sega Saturn as a launch game. This isn’t the case for the Panzer Dragoon Remake as its sole mission is to modernize the visuals while keeping the DNA intact. To keep your expectations in check, it is a Nintendo Switch game so don’t expect anything mindblowing.
On a surface level, it looks much better in comparison to the original considering it was all quite pixelated but there are also reports of things like animations not being on par with its counterpart from a few generations ago. It definitely won’t be something noticeable for newcomers.

The Soundtrack has always been something special when it comes to the Panzer Dragoon Series and the Remake comes with two sets for you to choose from.
One of them is the original soundtrack. The alternative option is a full-blown re-arranged soundtrack from Saori Kobayashi who’s worked on Panzer Dragoon Saga and Orta. Both are amazing in their own right, which is a big plus. If you’re unsure about the re-arrange then feel free to hop over to the Brave Wave Store and check out her Panzer Dragoon Saga 20th Anniversary Rearrangement and Terra Magica Album currently for free!

Panzer Dragoon Remake is a niche much-requested comeback for new generations that couldn’t experience one of the unique offerings that nearly came out 25 years ago. This Remake is a Restoration that emulates the core gameplay of the original rather than reinventing the wheel, with varying success.
The biggest question is how does it hold up? Due to its short campaign and a barely existing story we have a game that purely lives by its gameplay coupled with a lack of content.
Even considering all the hard work and the new re-arranged soundtrack, it’s difficult to recommend it at a price point of over 20 bucks. This might be different if they had included the original, alas that’s not the case.
This is a game for Panzer Dragoon Fans and those who love what they are seeing should give it a shot. Everybody else who’s just curious I have to give it with a heavy heart a Save for Later.