Cat Quest 2 grabs a simple concept and manages to beautifully execute it in a manner that allows it to be enjoyed by both kids and adults and everything in between – especially people looking for an engaging RPG experience that’s well written and paced. It’s not going to win any depth awards, but neither should it chase such awards, rather be it’s own little well crafted and written RPG with puns for days – I can’t even count the times I smiled and rolled my eyes at a pun the game made anymore – and I still love it.

This is, at the core, a re-review: Cynic already gave the game a good praise in his review HERE! This review will touch all aspects of gameplay still, but the focus will be far stronger on the brand new update: Mew World (oh, lord).

Celebrating Cat Quest’s anniversary and surprisingly large success (that fully deserves it, in my opinion), the developers implemented a rich update that adds content and overhauls existing systems within the game.

Firstly, modifiers! When completing the game, you unlock New Game + but also Meowdifiers (strap in folks, it’s going to be a pun-y ride) when starting over your campaign in order to really test your metal – from your typical-but-different-this-game Hardcore (you die enough times , you need to start over) to Naked (can’t equip weapons or armor), not levelling up, Magic Only runs, etc. – a lot of customization for your run is available, helping the game feel a bit more fresh every time you start over. 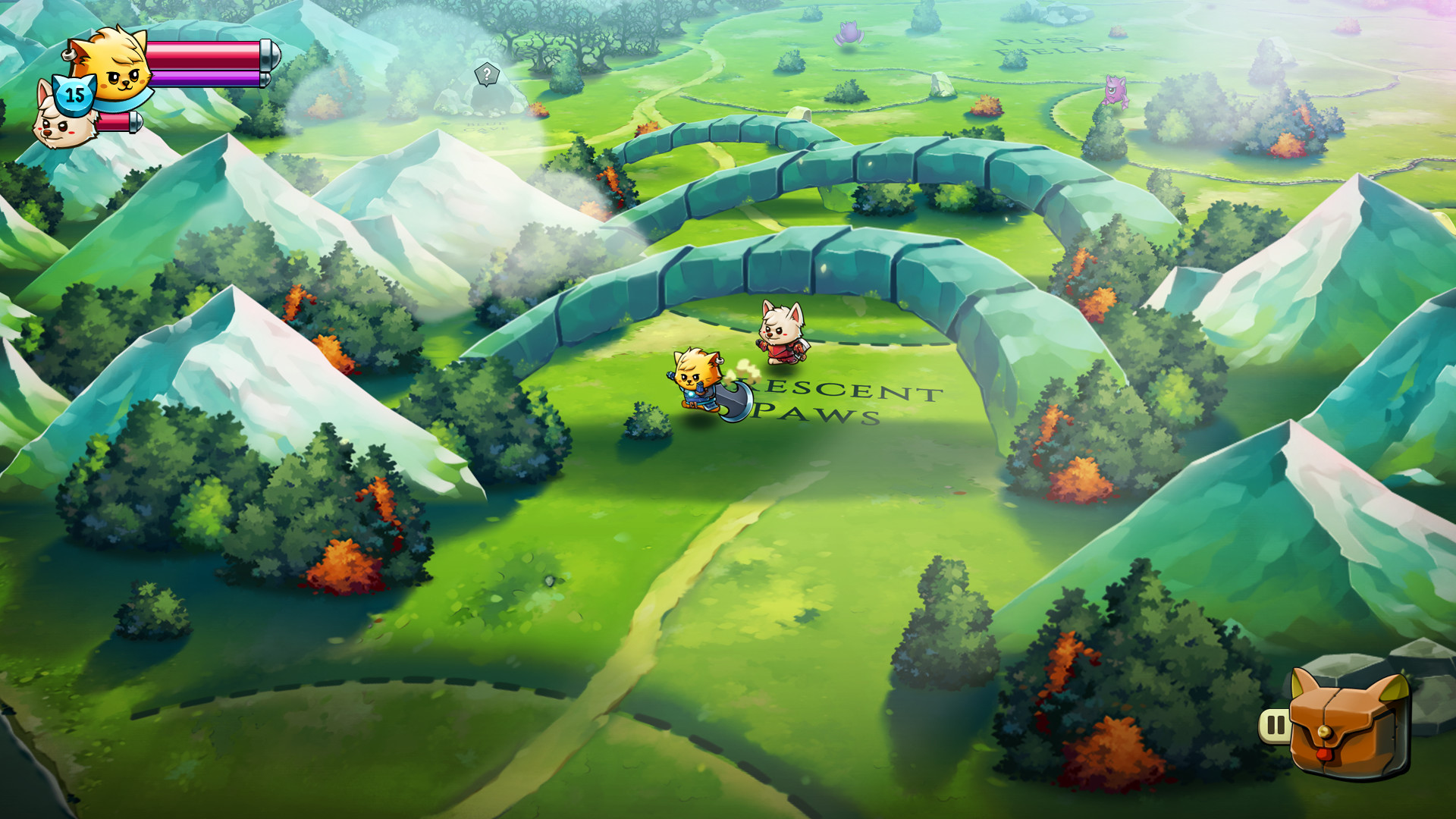 As it’s an RPG, inventory matters and Cat Quest 2 has enough loot to drive you crazy, but not in the way you think – it doesn’t RNG a billion different pieces of equipment but it rather has a fixed amount of equipment that looks all different from one another and all have their own buffs and stats. Every single piece feels different and even has its own rarity. Before the Mew World update, sorting was a bit messy and items had no rarity color code – now you can filter gear much faster and better even – there are colors for each rarity! Sadly, you cannot filter by color as far as I’m aware and that’s a disappointing missed feature in the inventory system – making it feel clunkier than it should.

Running in the (massive) open world can get exhausting and since you’re a cat (or dog) that runs on two legs – speed isn’t the best. Mew World introduced a much needed auto-sprint: after running a few seconds, your character will speed up until reaching a maximum speed state of sprinting that allows it to move much faster in the world – helping exploration feel less of a chore, especially since some sections in the world feel a bit too empty, unfortunately.

Elemental damage received much needed visual overhauls as elements now have a damage-number-color associated with them to better distinguish the type of damage you’re dealing.

New Royal Arts (“free” attacks you gain by progressing in the game – the first now being a dodge roll modification that enables you to damage enemies when dodging through them) were added and if even these new attacks don’t help you regards of difficulty, you can now play in Story Mode for a more relaxed combat experience – and better experience the story and dialogue.

Defense was reworked into a Halo-style shield: sitting over your health bar, defense is a new bar that takes damage first before you start taking health damage – and yes, it regenerates.

And more quality of life upgrades to ease the experience. 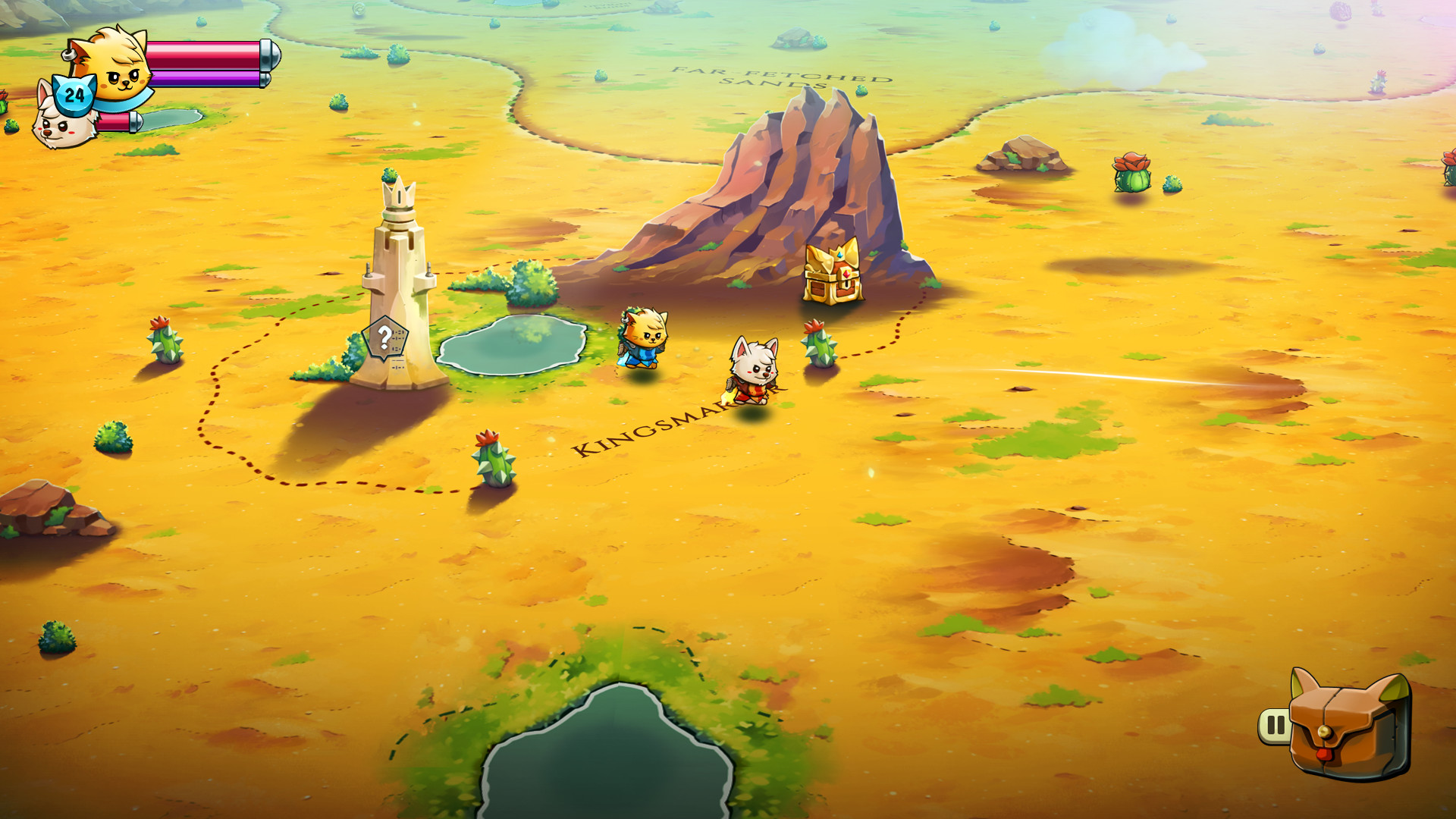 Let’s make it right, shall we?

As the kingsblood, you’re a Cat accompanied by a Dog (or vice versa should you switch characters) and you return to the Felingard Empire in a state of war between it the Dog Kingdom, Lupus. It is your task to make it right, recover your rightful throne and avoid the civil war expands beyond the chaos it’s already in. Until then, you’ll meet a lot of characters, evil or not, bosses, enemies and a rich world full of quests and well done dialogue.

There is no voice acting (I can’t imagine how hilarious it would be if it did) but the writing is fantastic, full of puns and cheeky jokes that it’s hard to not play with a smile on your face. The complexity of the story is null so don’t expect a deep RPG system with lots of choices and consequences – you’re here to make stuff right and kill anything in your path to it – Action is the word!

Overall, the story has really solid writing that shines through both dialogue and world-building, the civil war is well portrayed through dialogue and the inhabitant’s opinions, rather than constantly watching war break out among them. Side Quests are equally as interesting and well done and reinforce this lore establishing – one of your very first quests is even Dogs trying to trick the Cats to take a Tracking Spell instead of the Defense Shield they wanted to allow them to know their positions. It’s incredibly smart and subtle, adding a rich layer to the “cold war” between the two empires.

Side Quests usually are tied to a Questline – once you complete one side quest, you’ll unlock the following in that questline, keeping the characters of the questline and the theme of it. You’ll rarely find any quests that aren’t about escorting or fetching but it’s also difficult to not be interested in them thanks to both the writing and the way the questline’s story is told. One of the few games I felt the interest to do all the side content. The only thing taking away from the overall experience is a very annoying tendency to fade to black and show something that’s a few centimeters away from me, in my line of sight beforehand; you’ll frequently speak with characters, follow them a couple steps forward and have to engage in another conversation to progress in the quest – why not do it all at once? This constant move-and-stop-to-talk during quests is just annoying and the constant fading to black in dungeons and such is just an odd design decision that I’m not quite on board with. 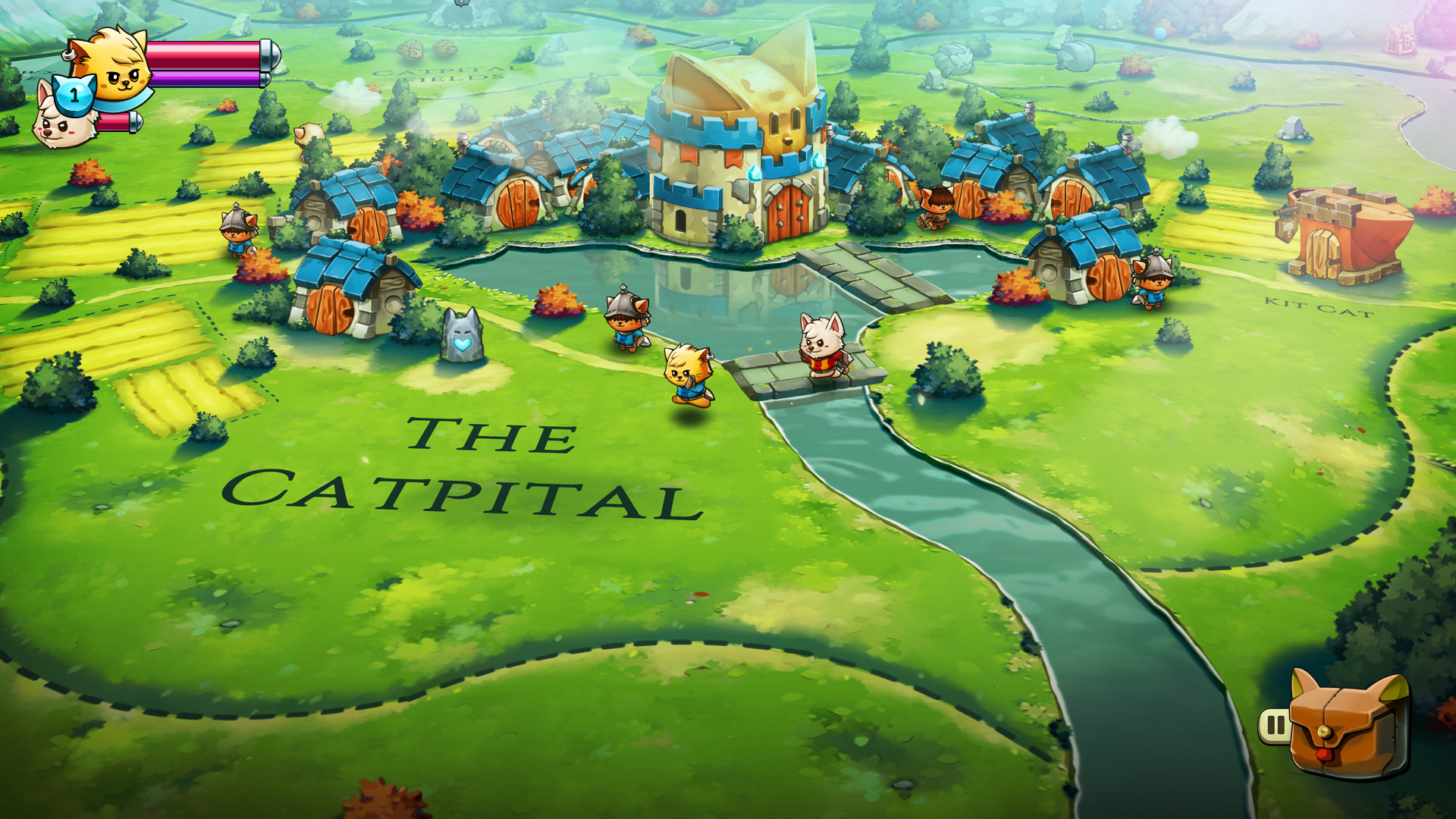 Cat Quest 2 is best described as an open world hack n’ slash action RPG. Combat consists of the bigger portion of your gameplay loop and while fairly simple, it’s also incredibly polished and responsive. You have your typical medieval setting weapons, on top of magic powers – most consisting of elemental damage abilities, others include healing powers or a berserk mode. Combat is directly tied to progression due to both being a source of XP (to level up) and clearing dungeons rewards you with a loot chest which always gives you either a new piece of gear or an upgraded version of an equipment you possess already.

Yes, gear is upgradeable – through levelling. You can level up your gear through gear chests or by paying a blacksmith. The same applies to magic weapons and magic abilities (though these abilities can only be upgraded by paying a mage, you don’t find spells in the world). Magical abilities themselves are found by reading stone slabs – 12 slabs exist in the game world, so you can have up to 12 abilities by the endgame. These abilities are really well done and all have a purpose due to their elemental damage abilities which are more often that not a really useful weapons against most enemies – most of them have a specific elemental weakness and resistance, so be careful when using spells. You can bind up to 4 spells at any time on the controller (due to the game’s nature I decided to play with a controller – the Mouse & Keyboard layout is very intuitive and works really well too!), one for each of the bumpers and triggers – a design decision I can’t praise enough, it fits the game really well.

Levelling up happens rather fast, keeping the pacing really fast and high octane. There is always a new place/dungeon to explore or clear, a new side questline to explore or just new sections of the world to adventure in. The progression and pacing are lightning fast and complement each other really well, keeping you always busy without feeling overwhelmed which is where big open world RPG’s tend to screw up. Cat Quest 2 knows its simplicity and evokes that simplicity with constant gameplay loops of combat and adventuring that rarely feel repetitive or boring, further enhancing the experience through the dialogue, which is frequent and doesn’t overstay its welcome (nor its puns). 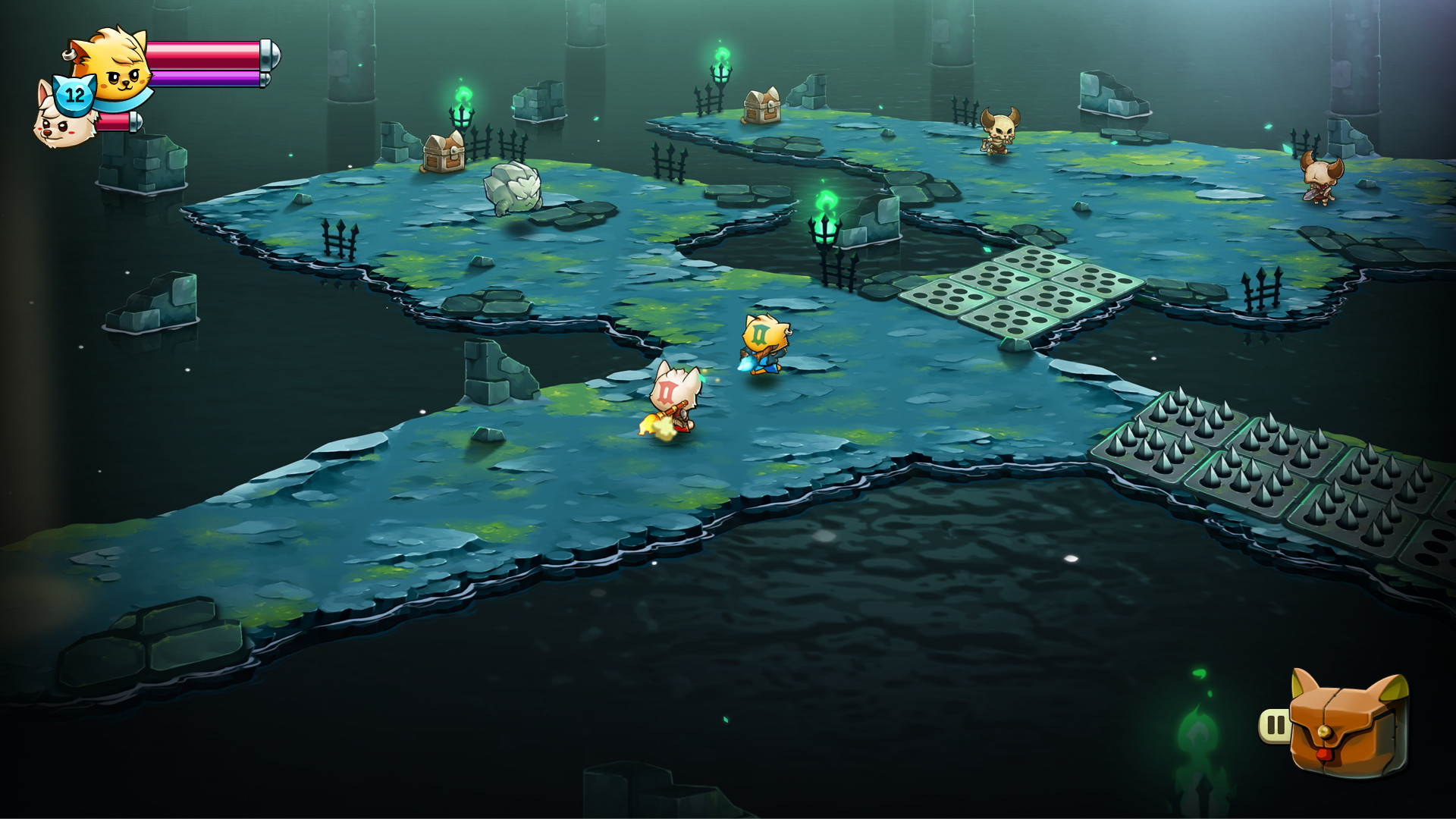 Since you are a Cat and a Dog, it’s worth mentioning that you can accompanied by an AI that controls the other character at all times – you can change between characters at any time at the press of a button but that doesn’t make the AI any less interesting or “forced” on you. The AI is still a nuissance I’d rather not have – in particular since my game can be played 100% in single-player – making me switch characters on the fly helps but I’d rather not have the AI at all – instead the second character would just “hide” in my playable character and I could switch between them with the press of a button – it wouldn’t be the first game to do it.

The AI isn’t bad but I don’t feel it’s a good idea to force it alongside you where it’s so obviously designed for co-op.

Yes, there’s co-op. It was my main form of play in fact – both locally and through Remote Play, Cat Quest 2 is an absolute thrill to play in co-op and elevates to a status where you can roll your eyes and laugh with a friend over the ridiculous puns and themes the game often throws at you. The AI issue I had was also gone so it was a win-win!

Through a really well done cartoony artstyle, Cat Quest is a joy to look at. The combat and dialogue are enhanced by great fluid animations and well done character portraits, respectively. Enemy variety is creative and visually well designed, furthering the overall variety of the combat as you progress in the game. The UI after the Mew World update is considerably improved but I still think there’s an overall lack of filters in the inventory. 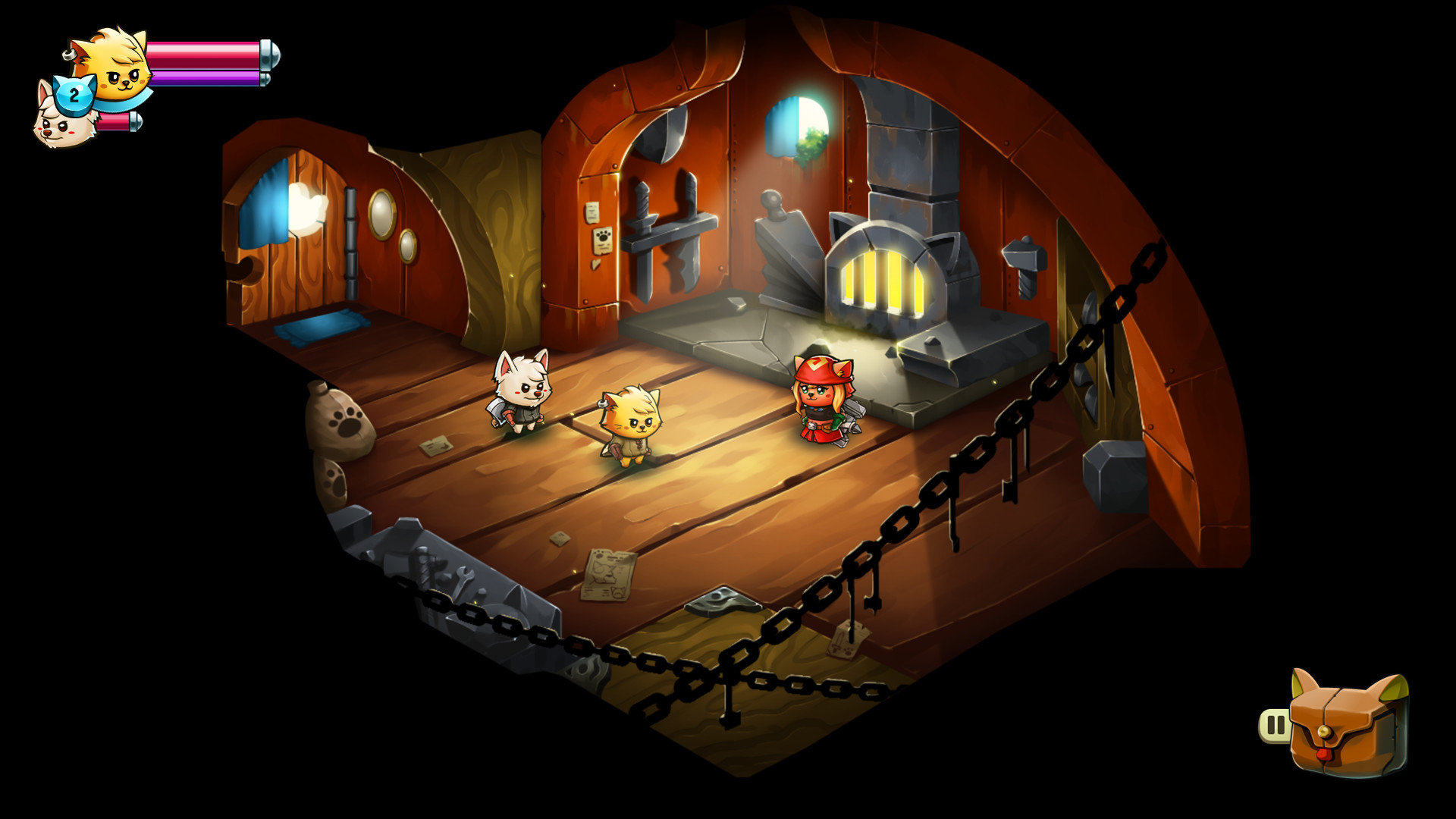 As far as audio is concerned, the soundtrack is really great albeit a bit repetitive after a while, a couple more tracks during world exploration would be greatly appreciated. There is no voice acting so prepare to hear animal noises as your main character interactions during combat and quests. Combat not only plays well but also sounds great – from magic attacks to slashing enemies with a sword, nothing is short of well designed in Cat Quest 2, both visually and in the audio department, some small UI issues and repetitive music shouldn’t keep you away from this great title anyway.

Cat Quest 2 is a purr-fect time (I’m so sorry) both alone and with a friend through its local co-op feature (Remote Play is also enabled). Despite an annoying AI follower during single player that feels forced due to co-op and a few UI issues, Cat Quest 2 is nothing short of a fun, well designed RPG with some remarkably witty writing filled to the brim with puns and cat/dog references. Absolutely recommended at the asking price of 14,99€.