The closest thing I’ll have to attending a real con.

We all have seen our fair share of villains, whether they were actually threatening or were just a minor inconvenience. Though, how did these villains manage to come up with these plans and how are they cultivating future villains? Well, in this universe, there’s a yearly Villain Conference where villains from all around can gather, learn from the pros, and hopefully get some networking done over four days. You are a new villain coming into the scene hoping to make your first con memorable or at least worthwhile. 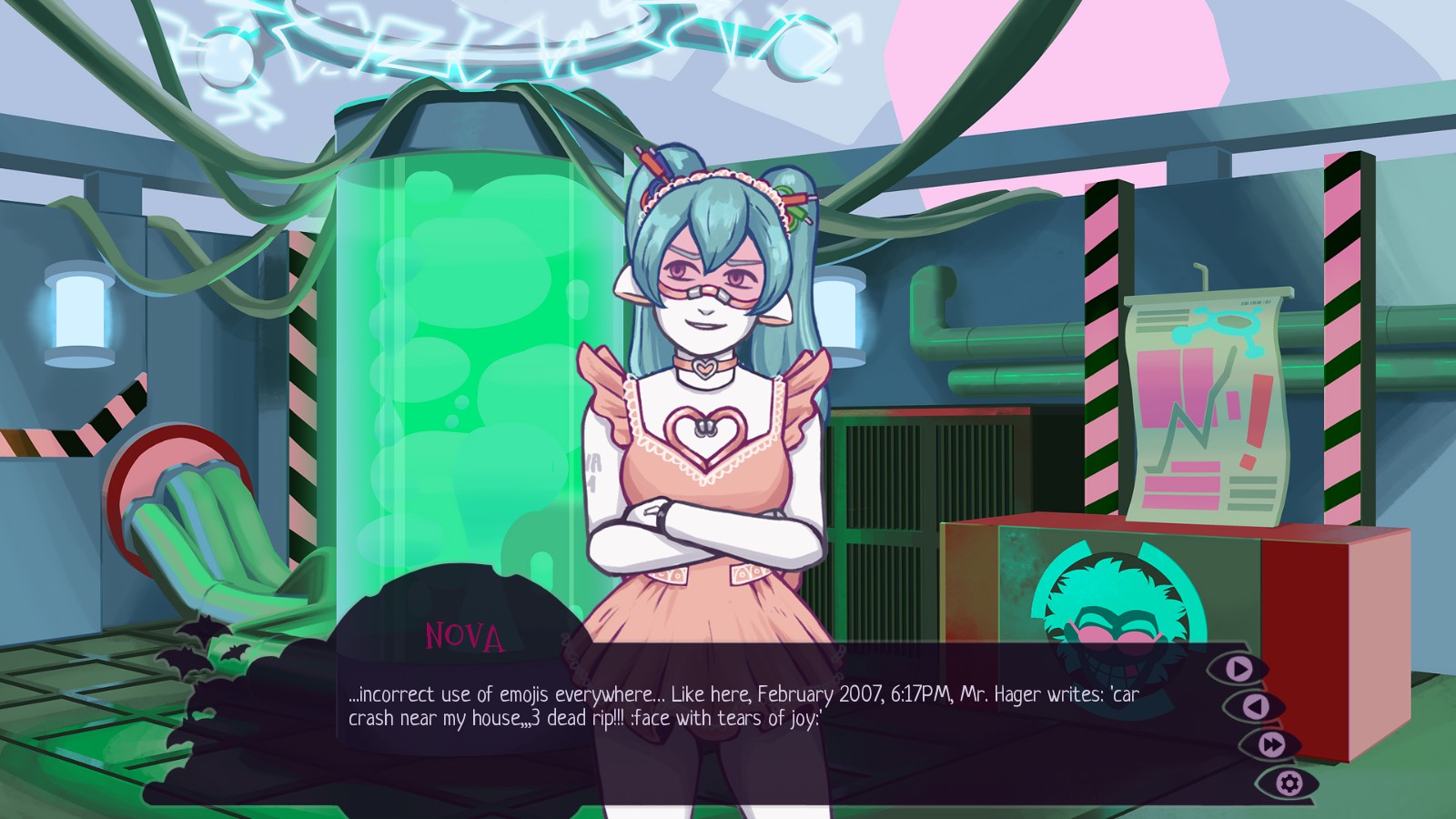 First things first, character customization. There are a lot of options for you to choose to make a villain you want to play as. There are a range of a decent amount of options to a lot for the various features you can pick out. If you want to be a cyclops with pink snakes for hair and a crow for a pet you can. Not only will you be able to choose your appearance, but your background. What kind of villain you are, what got you to be a villain, what’s your shining achievement, and your dietary needs. These do get brought up a couple times, but it’s mainly for you. The only thing is that you can’t really make a feminine character for yourself, which is what I always want to play as if possible, and some elements don’t really work well with others (like earrings, horns, and hats don’t really line up that well with some of the hairstyles). It’s also important to mention that the UI has changed and you only get to see your character on the map screen instead of always by the dialogue box. 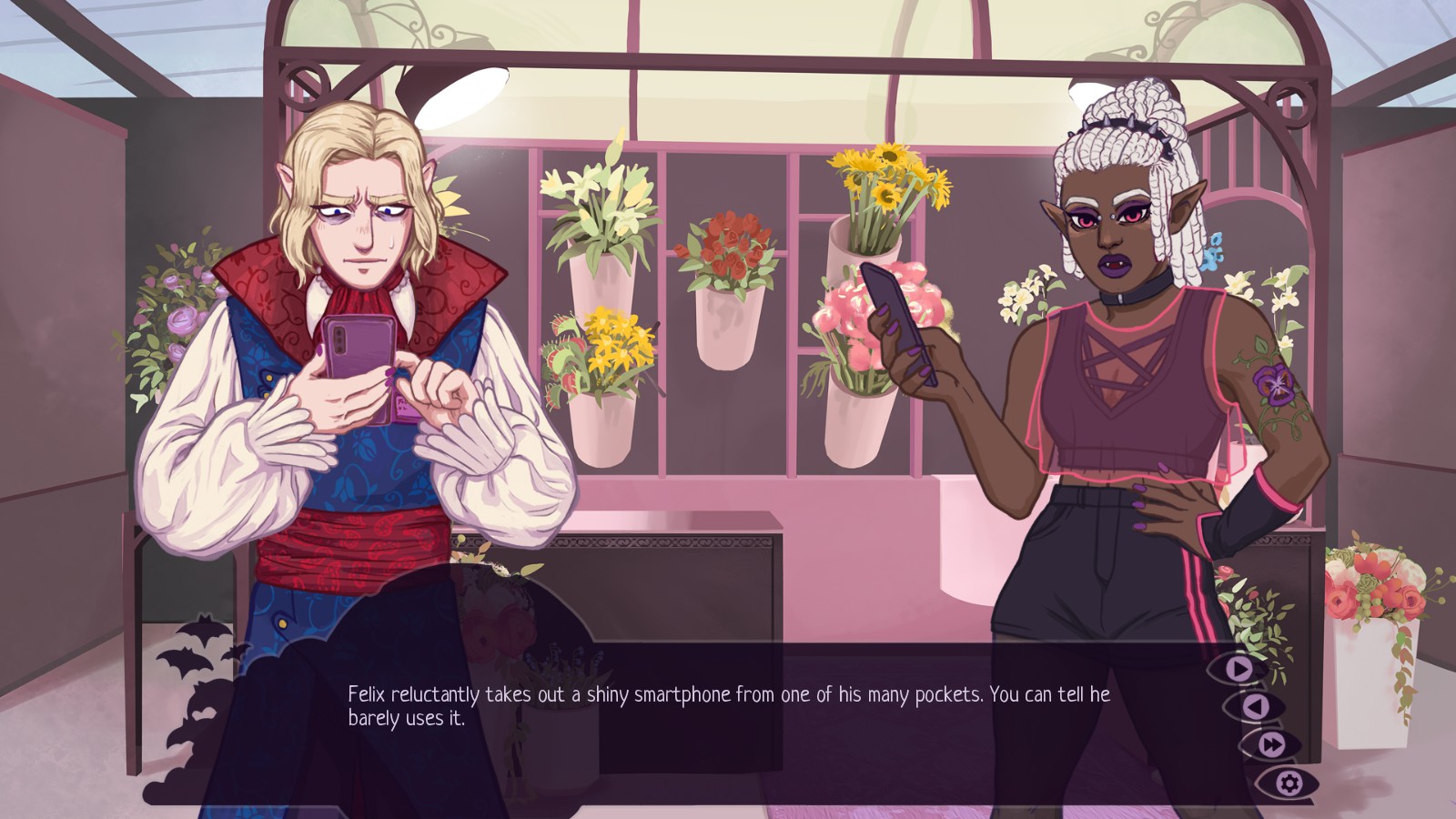 While you can just attend the conference presentations, who doesn’t want to talk to other villains and maybe find the love of your life? There are five characters you can date, with most of them having multiple endings and maybe different ending CGs depending on how you talked to them. You have Nova, the cute robot, who has developed self-awareness but must hide it from her creator and act as the perfect anime waifu around him until the time is right; Satan who just wants to take a break and doesn’t want to rule with an iron fist anymore; Felix the romantic vampire florist that would rather not adapt to today’s technology; the evil stepmom Imperia who has a goody two shoes daughter (yuck); and your Clone which doesn’t really want to be you.

Considering this is a conference that is hosting presentations over four days, there is a slight focus on time management. The dialogue options you can choose to get to know the characters more can have a star, which indicates something important will happen/be talked about, or a clock which indicates that an hour will pass. You won’t have to worry about time too much, as you can just talk to your love interest until you exhaust all options, but you’ll have to go eat lunch during the block, there are some presentations your love interest will attend, and some of them will have a new scene an hour or two later. Though, there isn’t any indication on when you did exhaust all the dialogue to prevent you from checking every hour. 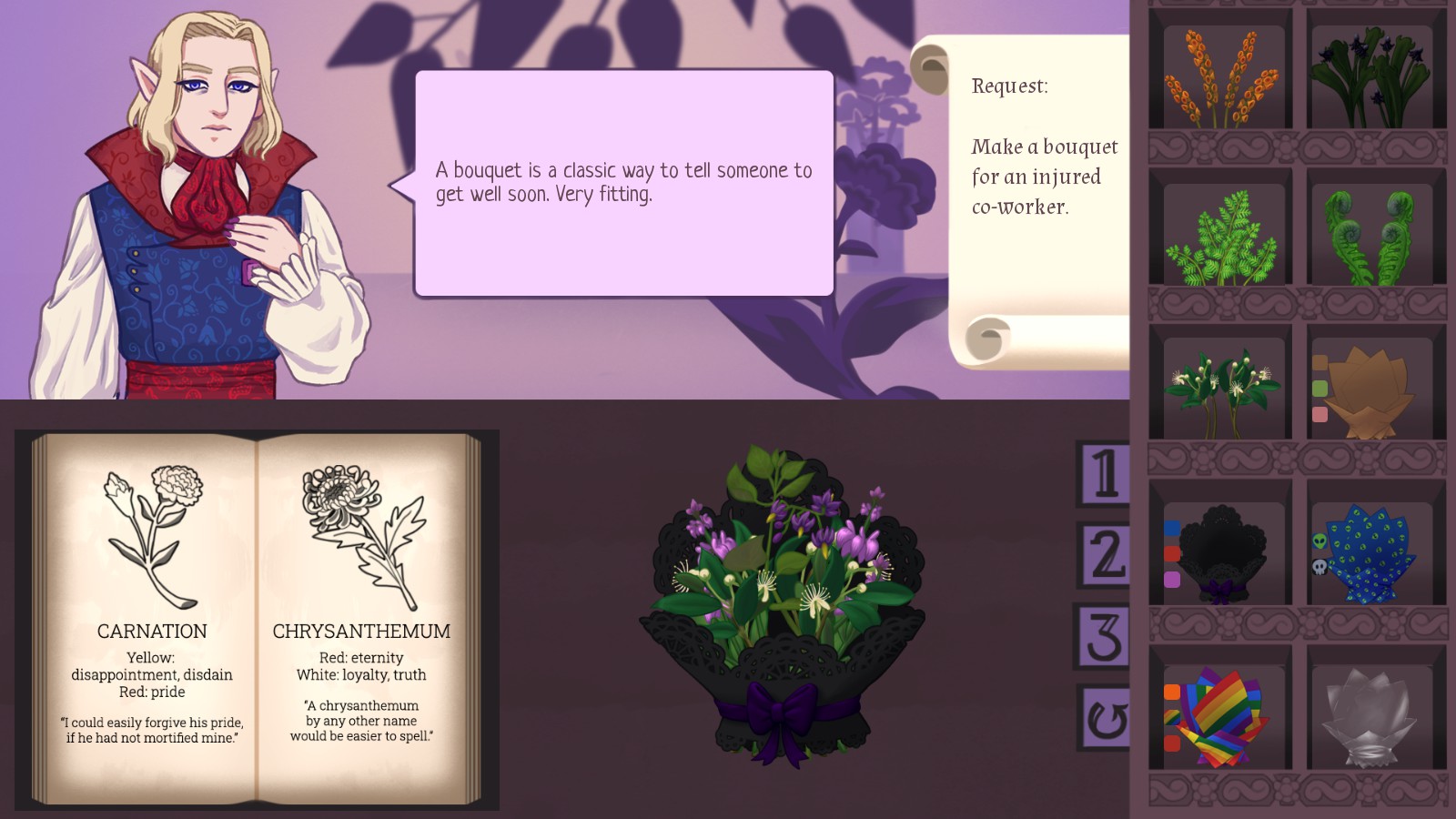 Each dateable character has their own minigame that will come up every so often, but these are a hit or a miss. Some are just okay, others just won’t be fun for you, while one or two will probably be your favorite. Going from my personal worst to best, the first is Satan’s who asks you to man his grilling station. As you expect, you’ll take orders, grill up some meat to the customer’s specifications, and add the finishing touches with toppings. Though, it throws in a curve ball of the orders being up for a few seconds, requiring you to remember what they wanted, and having to give advice to Satan’s workers to the right. This sounds like a fine minigame, well unless you have terrible memory, but it just lasted too long. After a while, I kept thinking it must be the last customer. Your Clone will have you spin the Torture Wheel. From what I can tell, this is random on what you get so your first Day 1 spin will be different on your next playthrough so you can see what each section is and what it does. Nova has you do a quiz to test your knowledge, some are common sense while others are specific. 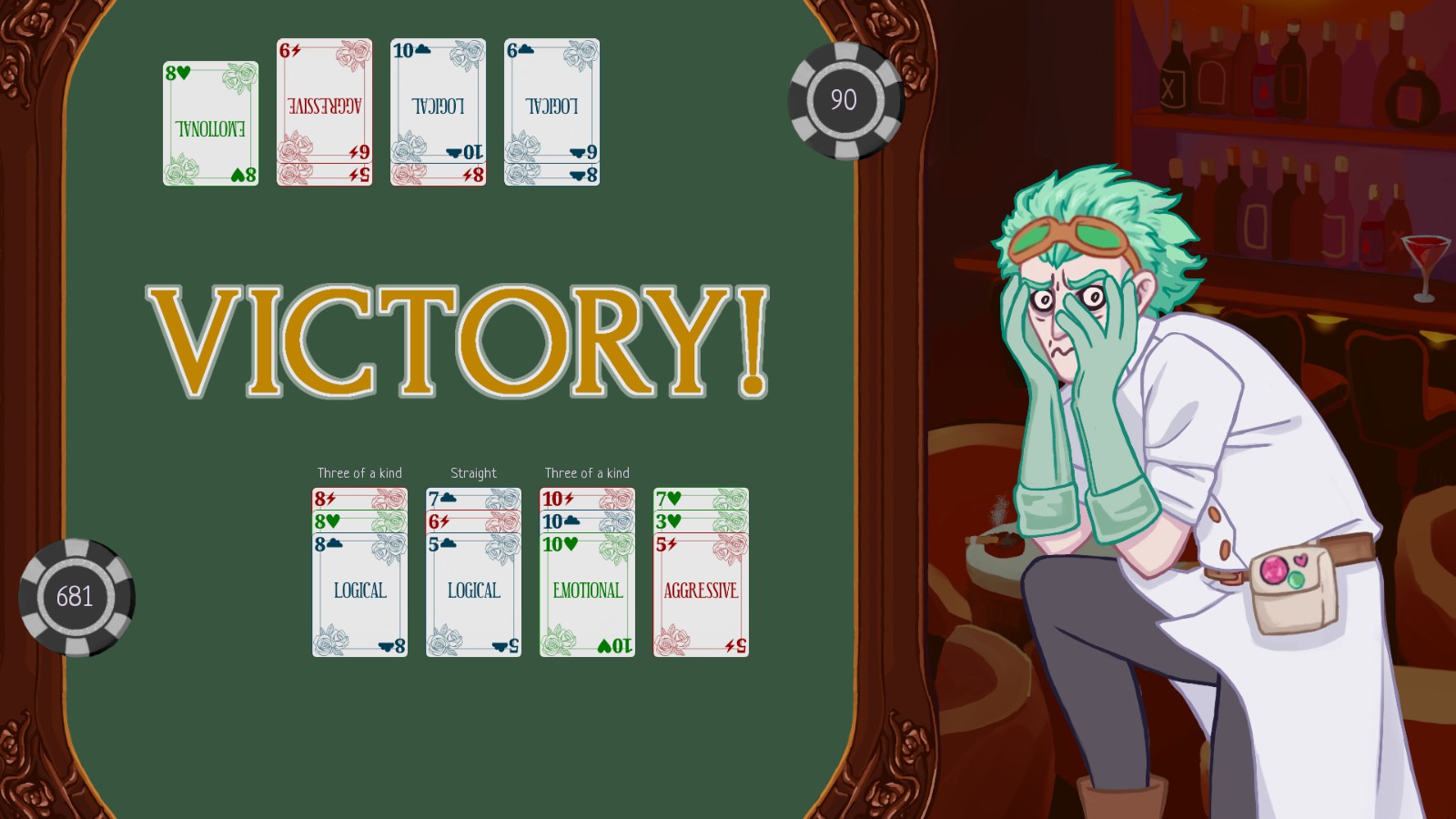 The lovely Imperia has an interesting card game that I ended up enjoying, though it’s probably due to my luck. This card game is a mix of rock paper scissors and Poker as it takes place of arguing with someone. Each card either falls under Emotional, Aggressive, or Logical suit and has a number. The winner depends on the suit and if it’s tied, the winner is whoever has the biggest number on their card. Whoever wins will be able to place the card on one of the four spaces in front of them and continues until one side fills each of them with three cards. Of course, you shouldn’t put them down without thinking as you’ll get points for getting pairs, flushes, or three of a kinds. Of course, there are some added cards that will give you an advantage or will give you more points if you win that round. Whoever has the most points by the time one of you has 12 cards in front of you wins the game. Lastly, there is Felix’s flower arrangement minigame which was my favorite. You’ll get a request with what the customer wants to tell through the language of flowers and it’s up to you to find the flower(s) that will do just that and wrap them up for delivery.

Luckily, there is an option to disable the minigames individually if you end up not enjoying it or if you’re doing a repeat playthrough for an achievement and you’d rather not be interrupted as you’re skipping through the dialogue you already read. Weirdly enough, the only minigame you can’t enable in the middle of your playthrough is Satan’s Grilling minigame. 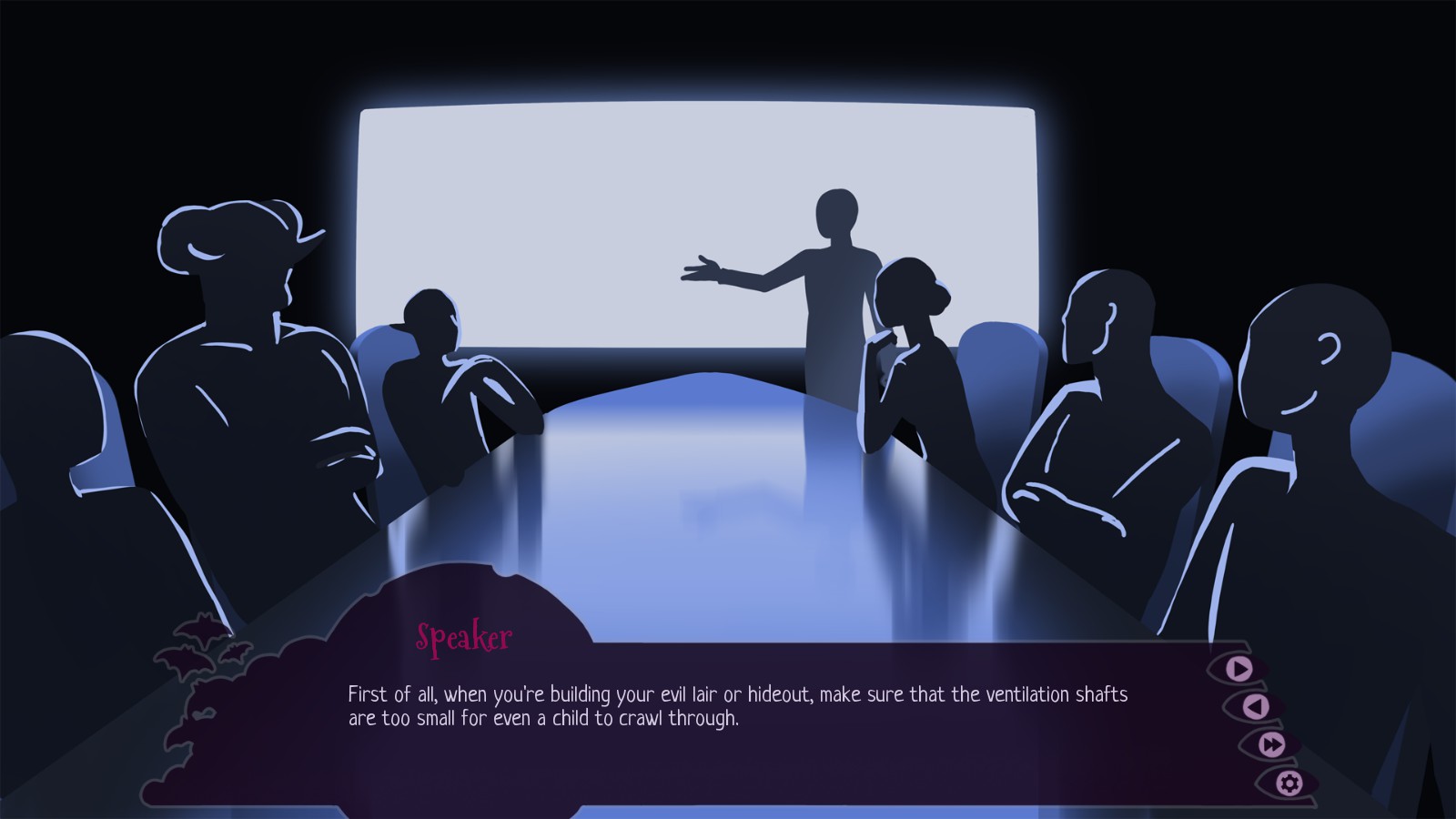 I’d say if you’re just looking for a quick visual novel that you don’t really have to worry about choosing the right choices to still get with them, only what kind of ending/ending cinematic you get, pick this up. Lovingly Evil was a delight and the comedy here is good and manages to not stray to they too corny territory even if it doesn’t hit your laughter gland. Depending on your reading speed, your first playthrough is going to be around three hours with grabbing all the endings and achievements taking up to 10 hours.