POSTAL is a funny franchise, with POSTAL 2 being the face of the franchise, a cult classic you’d never think would be recreated or re-done. And that’s when the POSTAL franchise’s developer Running With Scissors slaps a 4 on the POSTAL name and releases a janky and broken love letter to the franchise and the fans. It has such potential it even skipped the number 3!

In all seriousness, POSTAL 4 is an extremely Early Access release where you can see a lot of placeholders and potential content gold mines (my eyes turned into stars when I saw the Mega Mall) but as far as the current 0.2.0.0 build, you have access to Monday and Tuesday’s main missions (which are a collective 2-3 hours tops) and not THAT much else to do but explore the new town and see what the game can offer in the future.

This review will focus on the technical and gameplay state of the game as well as Tuesday’s content – you can read the original release preview by my colleague Psygineer (with Monday’s content) HERE.

POSTAL 4 plays exactly how a refined POSTAL 2 should – gun feedback, animation quality, overall flow of the ranged and melee combat are significantly improved over the decade-and-a-half-old predecessor, the combat is extremely entertaining due to excellent gun feedback and recoil mechanics, on top of really satisfying gore effects (sadly, gibbing is sorely lacking).

When starting the game, a very nostalgic screen showing all controls is displayed but you should get acquainted with them fairly quickly without needing to re-check, except the kick which is a quite unusual mechanic you rarely see in other games – always kick down doors to enhance your “badassness”! 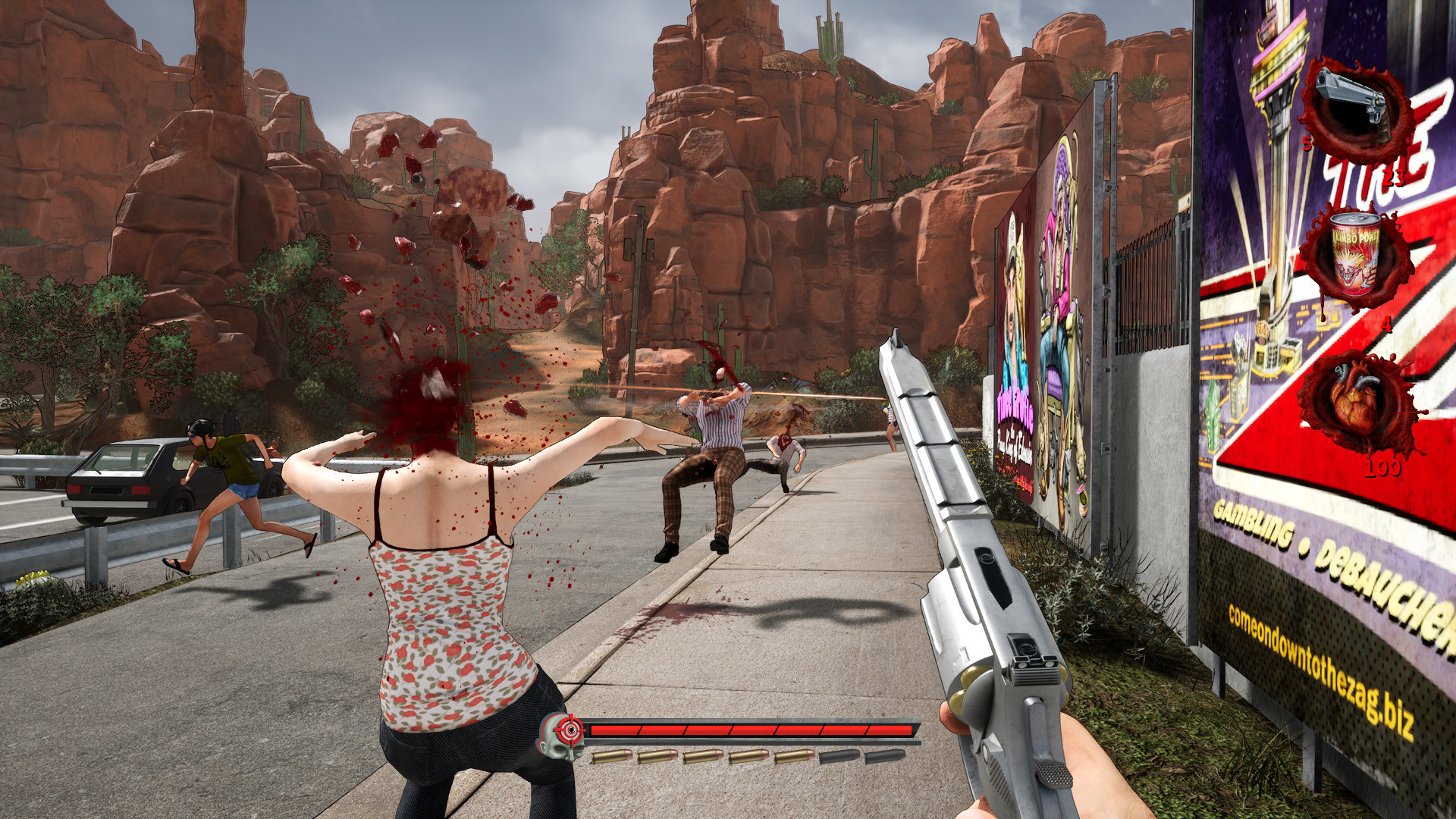 The world is far bigger than anything POSTAL has showcased before and walking around in the second entry could get exhausting after a while. You’ll be glad to hear that POSTAL 4 now has vehicles!

Even more disappointing is their speed which is BARELY increased comparing to the standard movement speed and since there is a lack of sprinting, POSTAL 4 is just not that fun to explore in its current state (understandable as well due to the lack of many places to visit as they are currently only placeholders) except for jumping which gives you a rather odd small speed boost so I ended up exploring the town by almost exclusively bunny hopping around which was admittedly quite fun while completing missions.

The scooter also has MASSIVE collision detection issues and doesn’t have good handling so using it is more of a crutch than an actual help – it needs significant improvements. 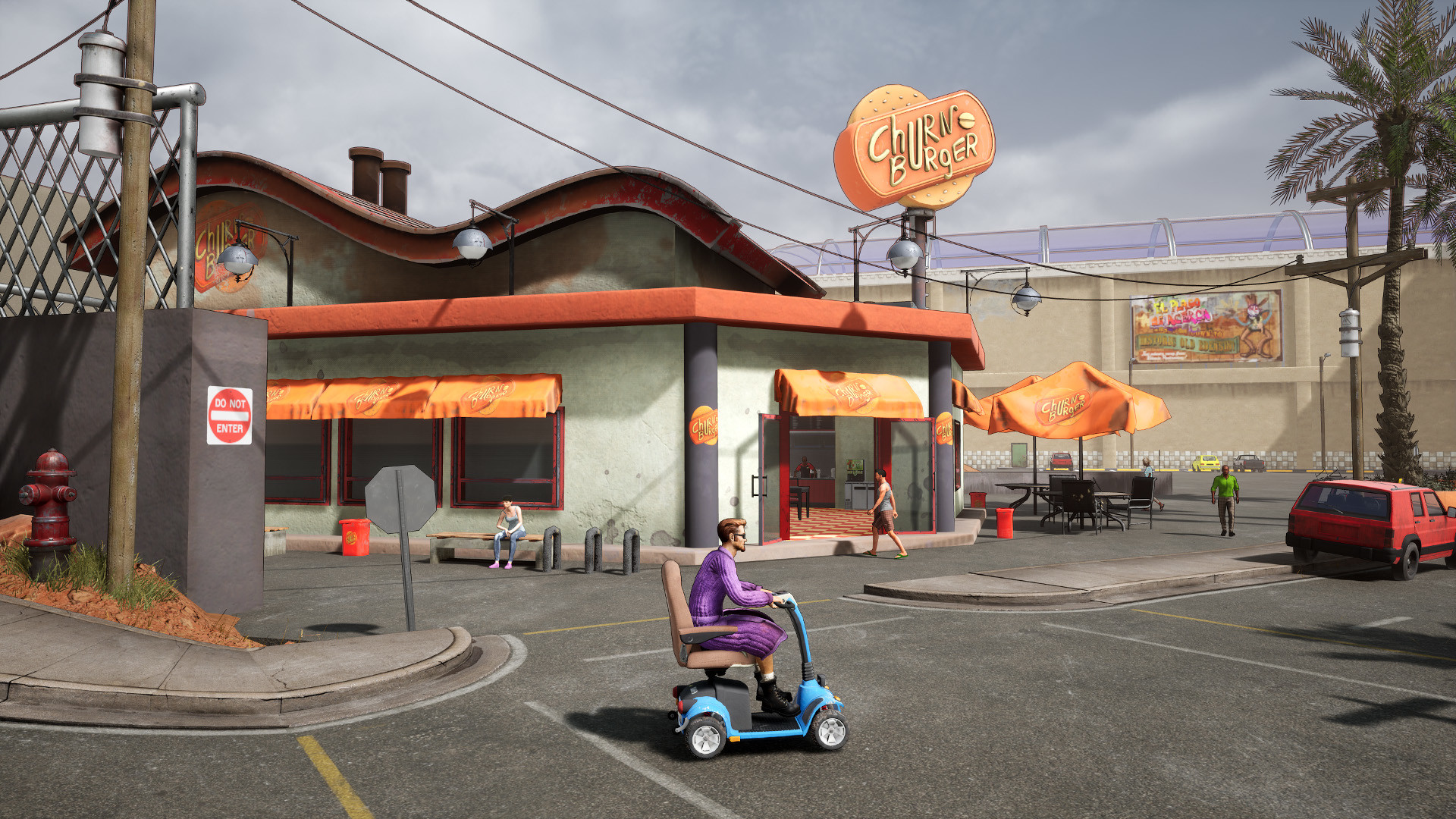 Right, missions! POSTAL is typical for having chapters work as days and assigning you with a certain amount of missions (which nearly always go south very fast in a predictable and quite hilarious way) and right now you have both Monday and Tuesday available. Due to the world being quite empty still, the days feels VERY short in comparison to other POSTAL games but that’s a problem of the Early Access state and not the mission design itself.

Tuesday has you meet a contact and doing community service for the police. Since I am a good citizen I rushed to the station to get that task done quickly! My service assignment is to ticket parked cars with expired parking meters – no problem, kick the parking meter to break it and ticket a few folks without breaking a sweat.

Wait, what do you mean I can deliver my assignment incomplete at that conviniently placed box near the start of my assignment to skip it?

What the hell, why not…

And so I did skip the mission because I can’t be bothered to run around town (and actually break a sweat) and ticket cars for a total amount of 2,000$, delivering the ticket obviously raised an alarm because good things are hard to get and there I was in a police station with the alarm ringing as loud as it can be without damaging my ears.

After a few dozens of cops killed, the police armory raided and the alarms neutralized I could go and meet my contact on the other side of town. Much easier than ticketing a few cars on the road.

The contact would then go next and… kidnap me. Damn.

In a hilarious cutscene, your contact turns out to be some sort of mexican gang and after releasing you, you’re given 3 assignments to complete, composing most of Tuesday’s content. Like any regular Tuesday, you will:

– Slingshot people over a wall without the border patrol seeing;
– Instigate turf wars;
– Become a cat; 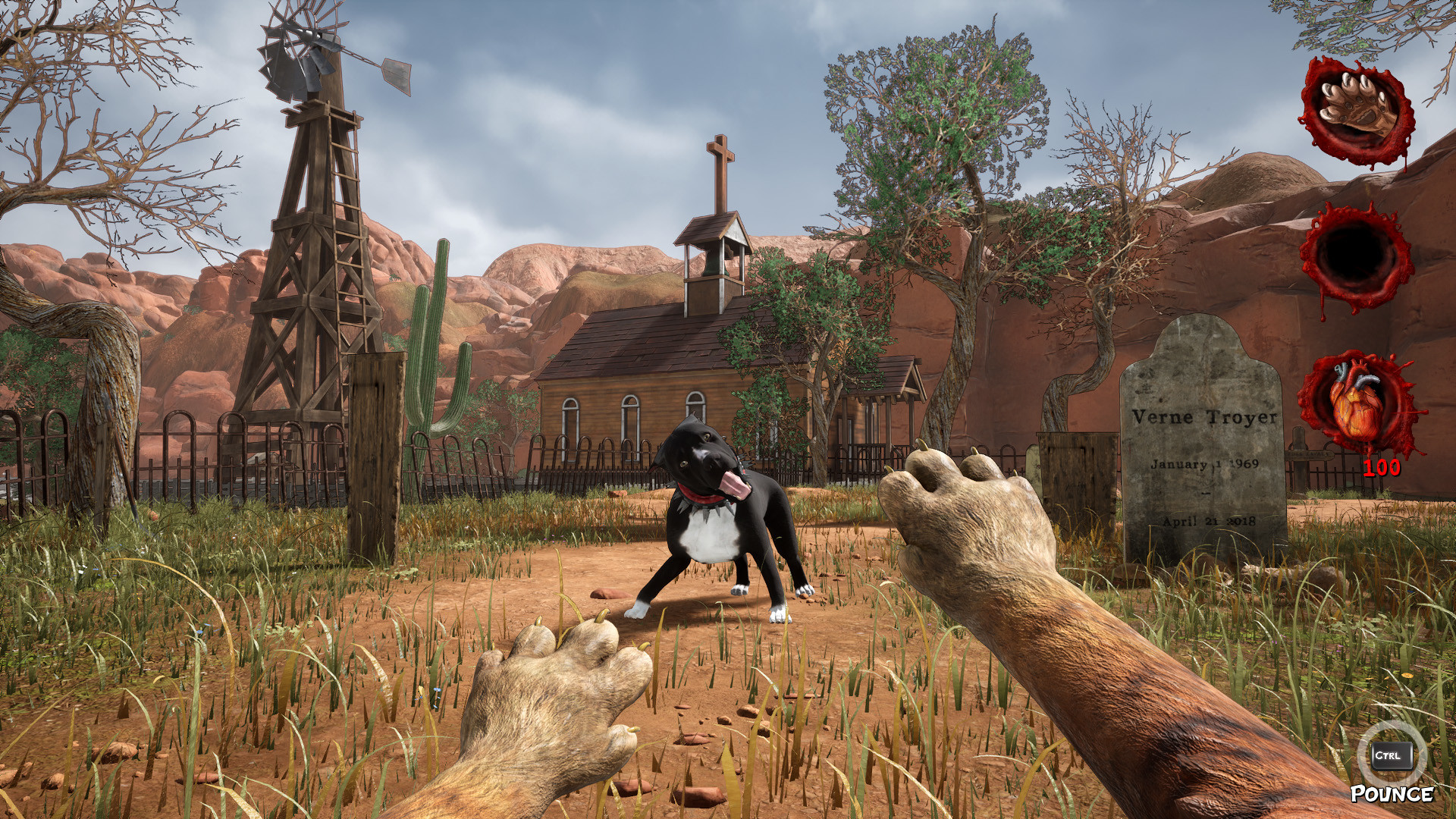 And it beats Monday’s content by a mile, in my opinion. It’s hilarious without dragging for too long and overstaying its welcome, the pacing of the missions is great and there’s a lot of creativity involved (and I also urge you, the player, to be creative while playing because at the end of the day that’s POSTAL – experimentation and trying new funny gameplay styles is what makes it a fun game, instead of playing it like a standard open world FPS).

POSTAL 4 is still very barebones in its content but the core gameplay has massive potential to be the best POSTAL game ever (and one creative and unique open world FPS) should the mission content in future updates keep up with the ones presented in the current build.

The technical side is where true fixing is needed…

Graphically, POSTAL 4 looks like a much improved POSTAL 2 but with a bit of cell shading added to everything, from your hands to the guns to the NPC’s and I honestly love it. POSTAL fans who dislike it can turn it off in the options menu so don’t get alarmed if this doesn’t sound like your thing. I think the cell shading is a great new touch and doesn’t hurt the overall violent and comedic style the game portrays frequently. The graphical quality is quite good and texture quality is quite good in some places but the game still has a lot of empty areas that lack proper textures so don’t expect a polished looking game yet. 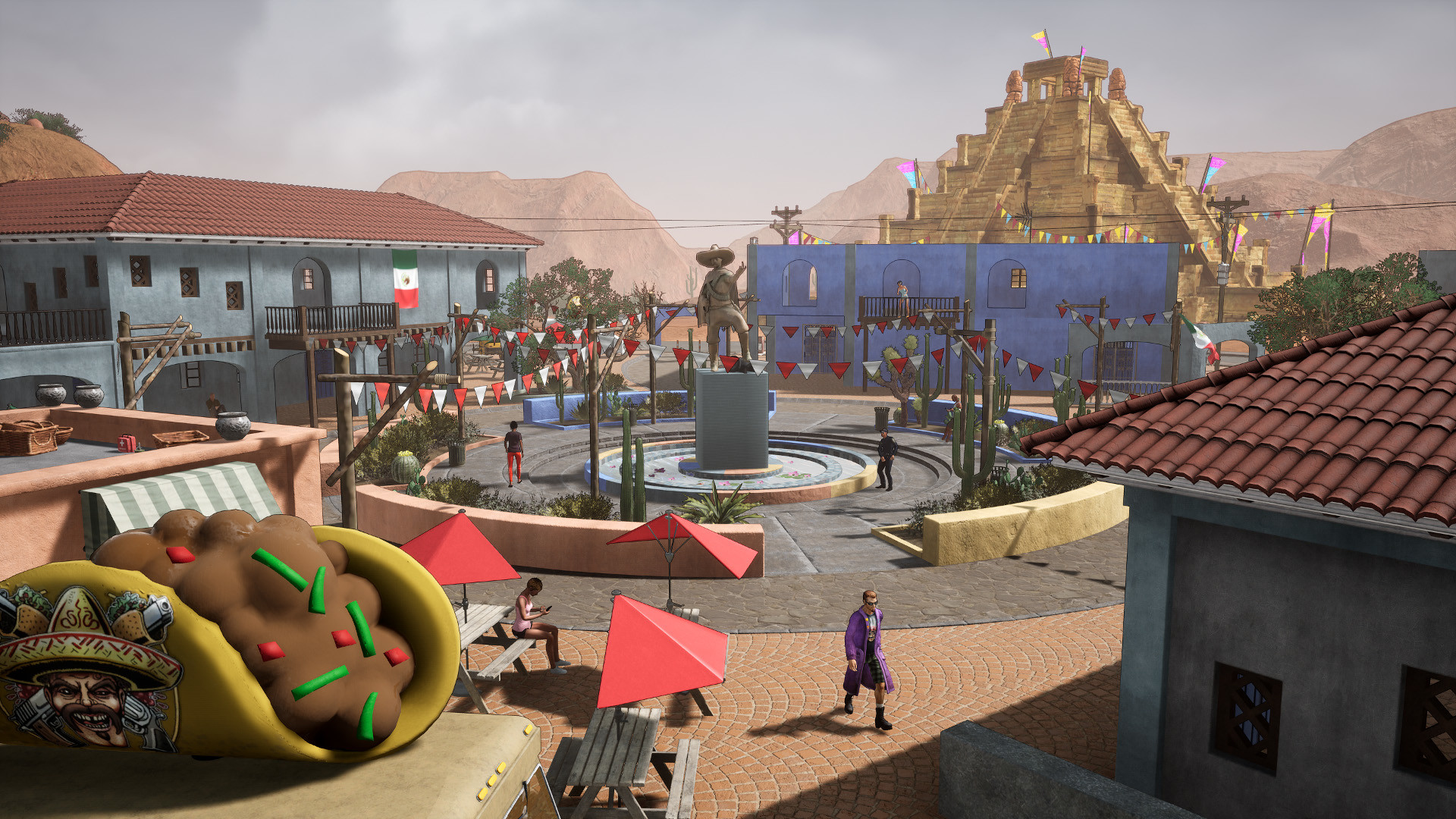 Don’t expect a polished functioning game either as you’ll encounter countless bugs and glitches that were more noticeable to me when using the scooter and its wonky physics and clunky mechanics.

The performance is beyond abysmal and is what truly hurts the game for me. Not only does the game hitch during combat, completely throwing off my aim (and since I’m hard, my aim really can’t be messed with or I’m done for quite quickly), teleporting everyone around and in general giving me a heart attack thinking the game is frozen and I lost X minutes of play time because I didn’t save scum every 5 seconds. Hitching aside, you’ll struggle to hit a stable framerate – I run the game at pretty much the same framerate no matter the graphical preset (from Low to High) and not even tampering in the advanced options helped much, making combat a pain in my behind as I was having a blast shooting around and messing with the countless fun things you can shoot and shoot at but that fun was killed every 10 seconds or so by hitching and massive performance drops.

Audio wise, POSTAL 4 is the best sounding game with a small but already well done soundtrack (personally love the menu theme) on top of nicely voice acted NPC’s in and out of cutscenes (while still maintaining some of the cheese that still make the second game so funny). Gun sounds are absolutely fantastic, from the standard desert eagle to the mighty AK, all guns (including melee weapons) deliver powerful sounds when used making combat even more fun. 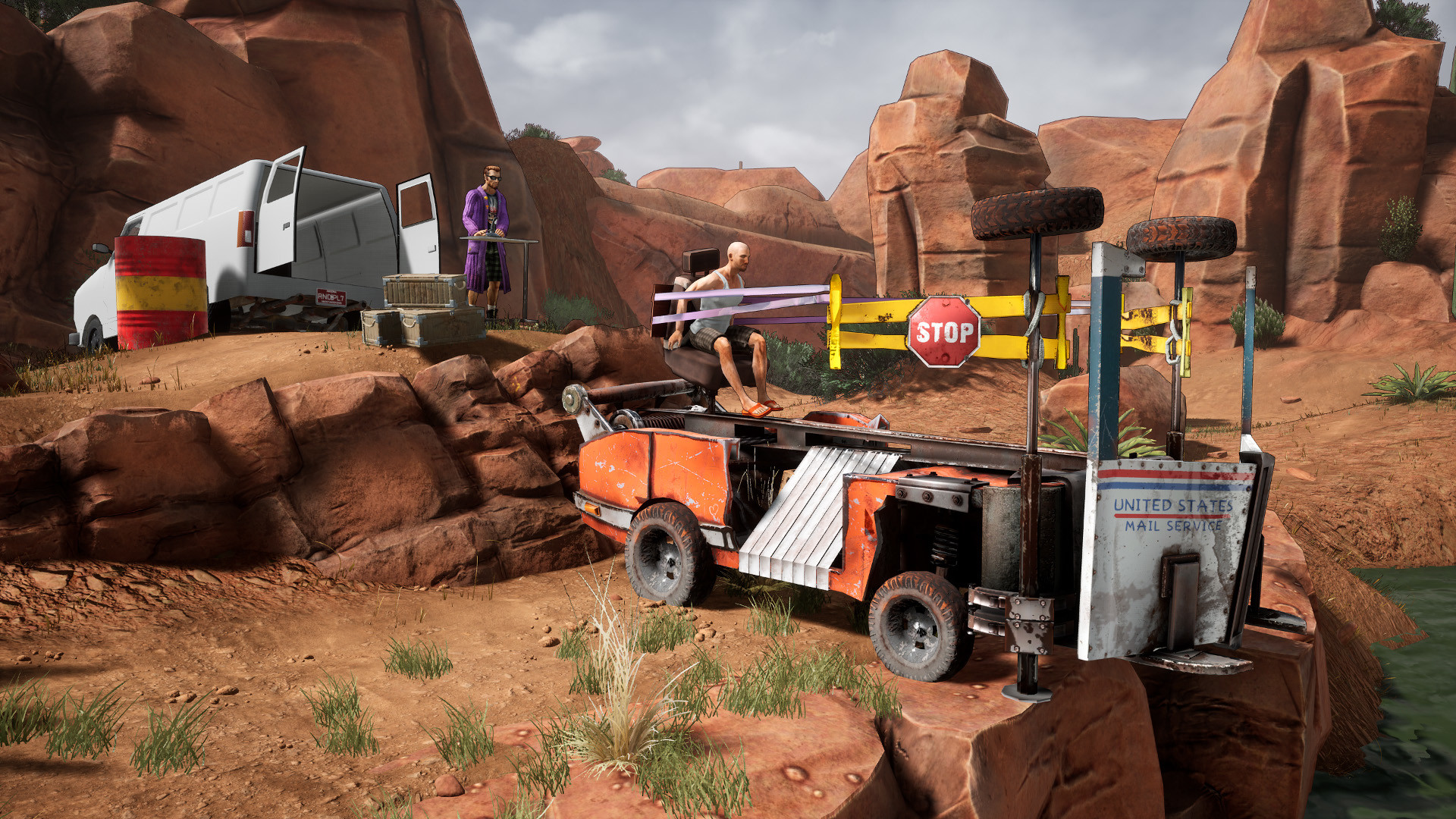 Let’s talk about the protagonist, the POSTAL Dude, now voiced by Jon St. John (the voice actor of Duke Nukem) – I love the narrator and the Dude’s voice acting but it bothers me somewhat that he doesn’t sound much like the Dude – I even prefer the POSTAL III Dude than the one in this 4th game. It’s worth noting that much is yet to be released so I may change my mind eventually – the current Postal Dude is still great, don’t get me wrong, but I still like it the least (which in a way, says something about all the portrayal’s of the Dude in the POSTAL franchise and how good they are voiced).

POSTAL 2 was a nostalgic cult classic experience of bad taste and humor – POSTAL 4 takes the core of it and releases a modern improvement of that core with enhanced graphics, great gameplay and a bigger, hopefully more detailed and rich world filled with content and jokes that make the new town worthy of exploring in every nook and cranny.

As far as a recommendation goes, I cannot recommend this at all unless you genuinely want to help both support the developers and give feedback and suggestions actively during the development state of the game. There is insane potential for this game but that’s as far as it currently goes – potential.

The game acknowledges its “Janky Alpha Build” state in the game itself and if a barebones, devoid of content messy game is what POSTAL 4 is in its current state, I am dying to see when time and love turn this great core into a great game. Welcome back, RWS.