Honestly, I would want to escape Valhalla if I was forced to be on an Esports team.

Helheim Hassle brings us to a young teenage Viking named Bjorn Hammerparty who isn’t like his Viking brethren. Unlike everyone else, he is a pacifist. He doesn’t want to go out fighting so he makes sure he doesn’t get into a situation where he has to and he sure doesn’t want to go to Valhalla. However, during a battle that is sure to wipe out his whole village, Bjorn gets into a fatal accident while he was running to his hideout. The sketchy bridge he was crossing may have made him fall straight onto a bear. Once Bjorn comes to, he’s a ghost and his body is limbless. Before moving on, Bjorn attaches his limbs back on his body and talks to Modgunn to be granted passage into Helheim. However, his cowardly fall to his death was counted as him heroically killing a bear without a weapon and is brought into Valhalla by the Allfather. 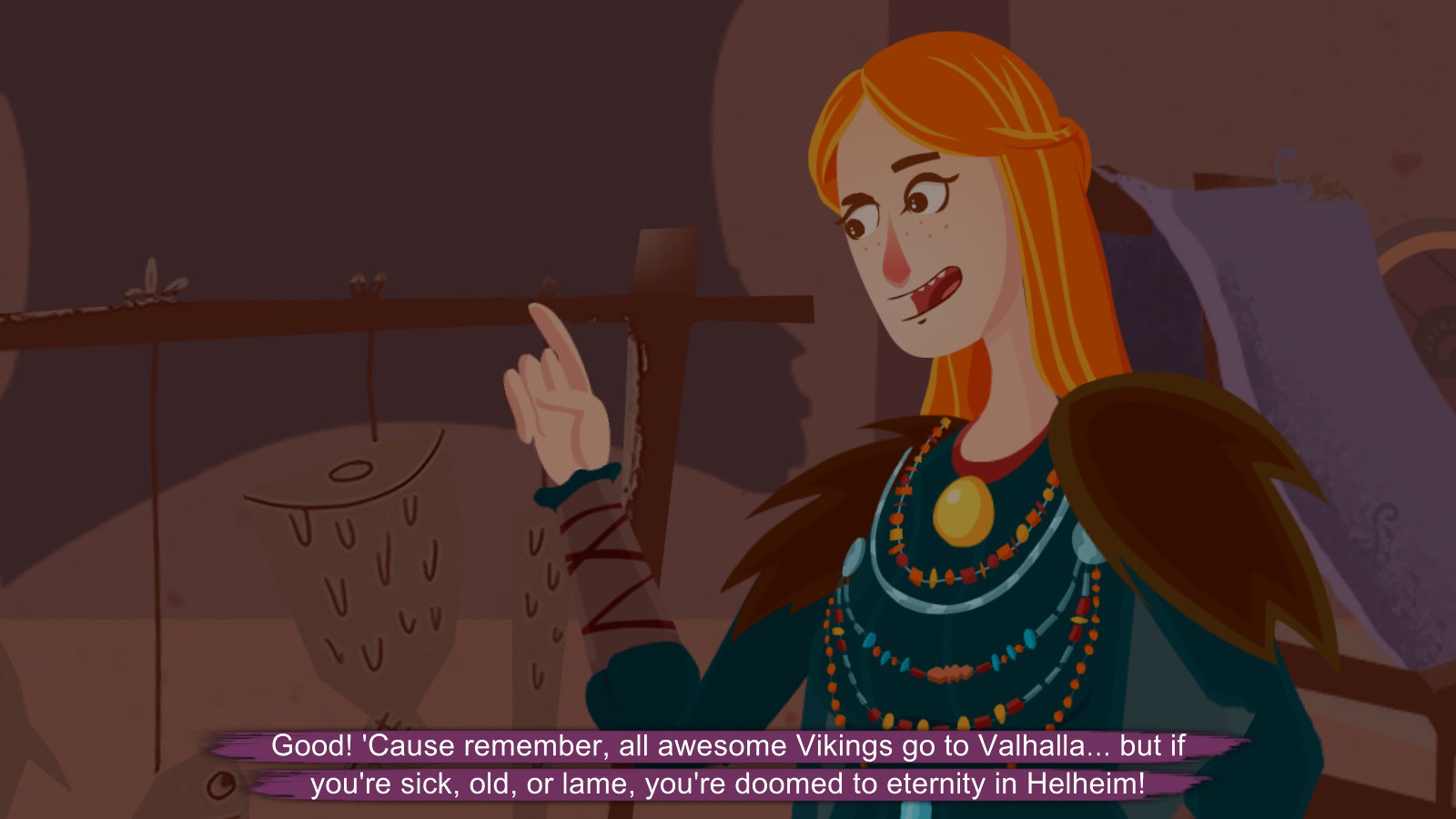 And that’s where Bjorn stayed for centuries. That is until Pesto comes across his body and resurrects him since Pesto can’t read Old Norse to get through the door to Helheim. It doesn’t take that long for them to find out that Bjorn’s limbs can detach from his body, make a deal with Pesto so Bjorn can enter and hopefully stay in Helheim, and find out that Helheim is getting a bit of a renovation. That renovation being a bunch of puzzles being installed along the road to Helheim that is strangely perfect for Bjorn’s situation. Though, Bjorn’s absence in Valhalla doesn’t go unnoticed. Mostly because the Allfather is very into shooters and Bjorn is his team’s healer. Well, this sure will be a hassle! A Helheim Hassle (haha, okay I’ll see myself out).

So to get all the way to Helheim and ask Hel if Bjorn can stay, you’ll need to use Bjorn’s new ability to use. At first, you’re only able to detach one or two limbs, along with the puzzles starting out easy, to get used to how each limb controls and so you’re already prepped to think about how you’ll get your limbs up there rather than your whole body. As you progress, more are unlocked until you can detach and move every limb. Each limb has its own way of moving, how it’ll affect the main body, and how it’ll affect the movement of a group of jointed limbs. Your arms are great for climbing, legs are great for running and jumping, and a head, well, is just a heavy blob that weighs your body down. When you’re combining limbs, or detaching them, you’ll need to think about these aspects. If you need to jump high and climb, for example, you’ll need to combine a leg and an arm. 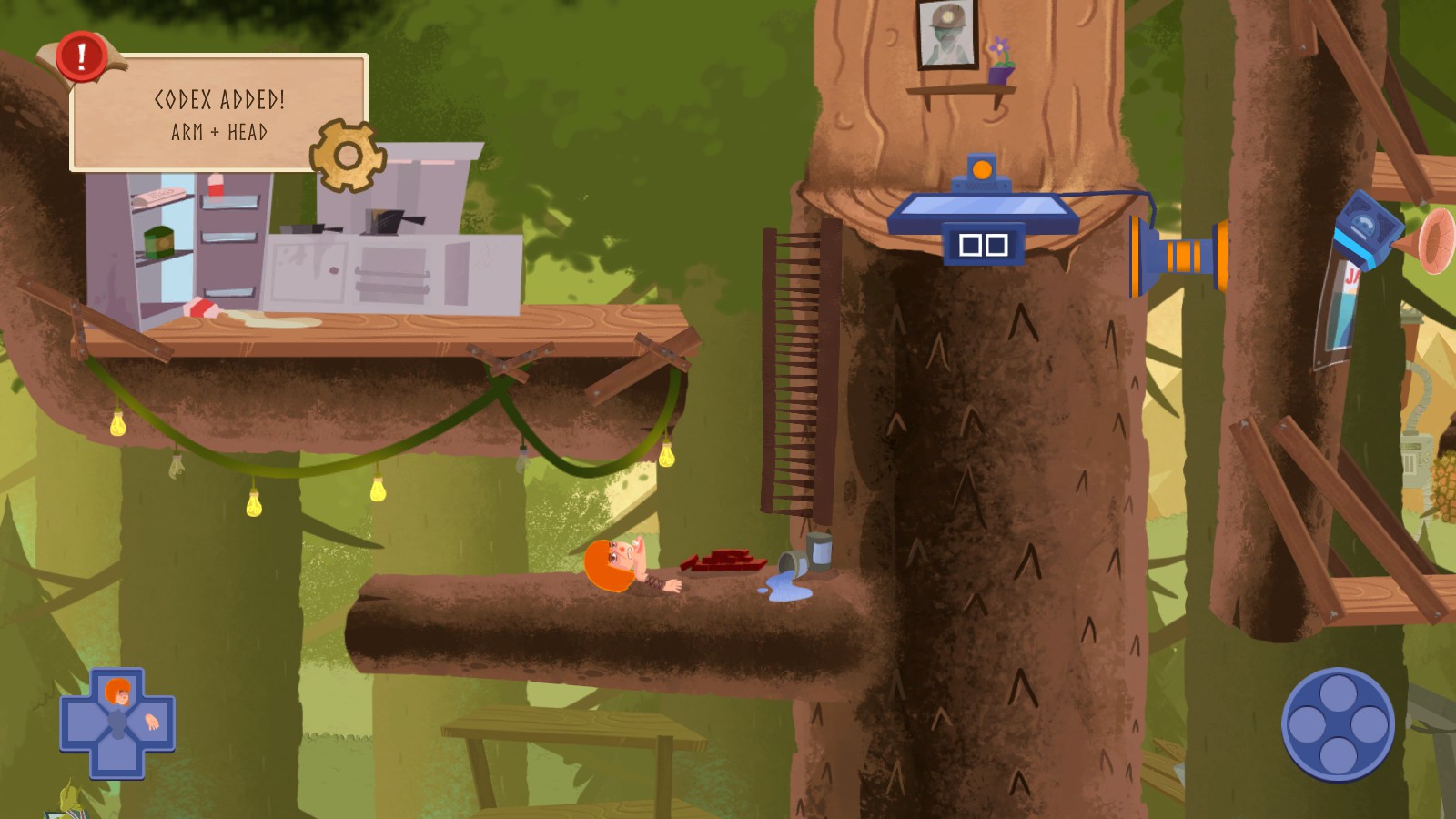 The puzzles here mainly revolve around this unique mechanic, as you need to manoeuvre your body parts to the needed pressure points to open doors so you can take your whole body through. There are also situations where you need your head or your arm as you need to read or grab something as part of the puzzle. Finding those gaps that your limbs can squeeze through, or figuring out what limbs you need to send, so the pressure points can be pressed. Throwing your limbs around in cases where it’s just too high for you to jump to. Or even figuring out the sequence you need to send out your limbs to so you can open up an opportunity so you can get the other limbs there or to release them in cases where they’re trapped. Later on, you’ll be tasked with bringing specific limbs to pressure points, making it harder as a result. There are also a couple of puzzles that emphasis speed, but they are few and far between. 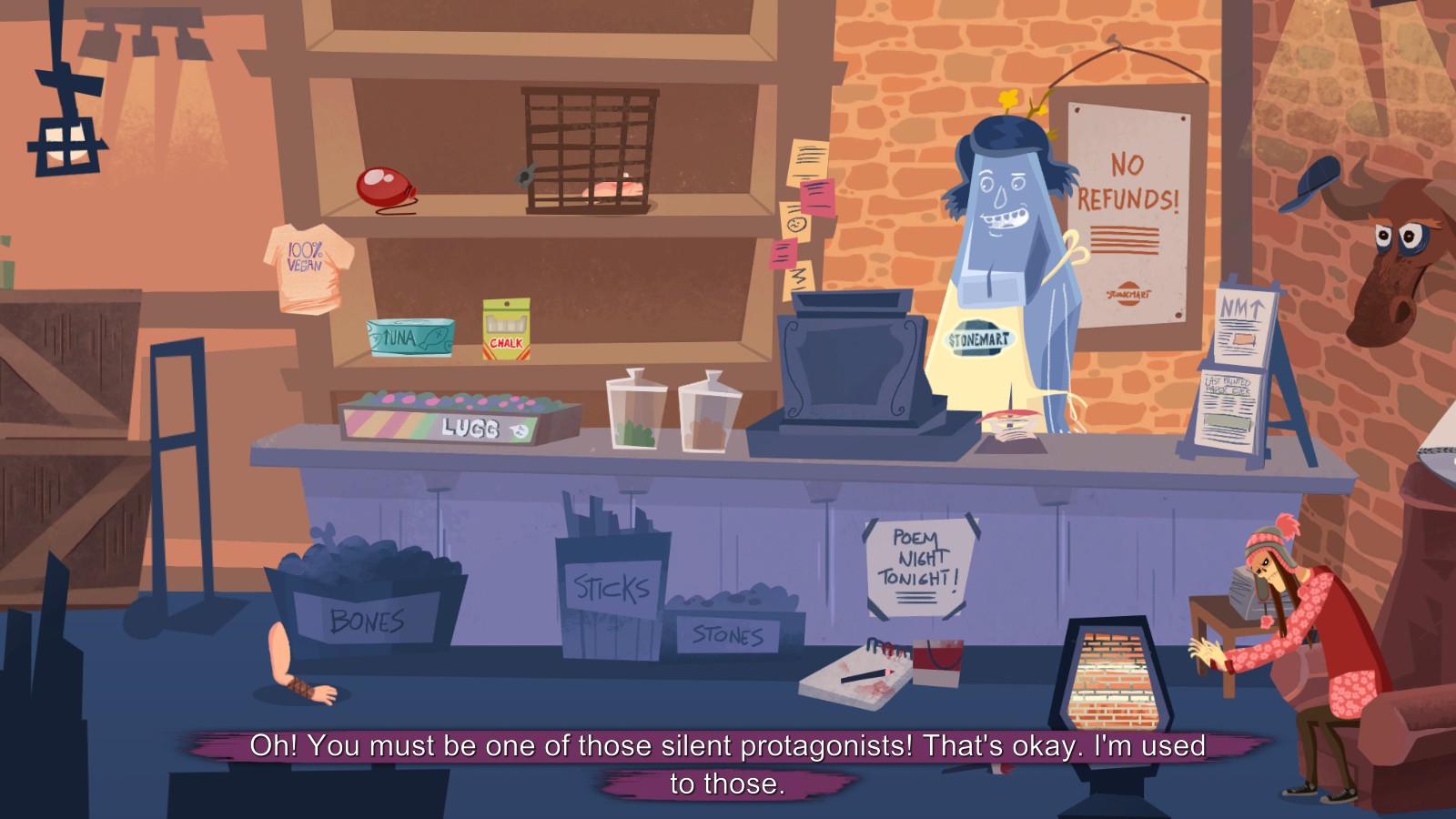 I also can’t write a review and not mention the immense amount of extra content. If you’re just going straight from beginning to end, just doing the puzzles and quests you need to do to continue, you’re pretty much missing most of the game. Even if you are doing some extra things along the way, you’re still missing a lot. There are a lot of optional puzzles that you can find, optional notes scattered around, berry bushes hidden in places you can either easily reach or barely reach, side quests galore, races, and a whole convention where you can fund and play game parodies. Though, it’s important to not get hold up if you’re stuck on a particular side quest. Doing the optional puzzles will often lead you to chests with gold or soul coins that you can spend and berries can be made into smoothies so you can gain abilities to help you. Luckily, the map does let you see if you got everything in an area. There are also one time things that you can only do once so you’ll need to at least play twice if you’re planning to get every achievement.

Also for anyone that’s going to pick this up, you do get notified of a point of no return, but it’s only until you finish ending sequence. You’re brought back so you can get anything you missed once you complete the game, so no need to worry. 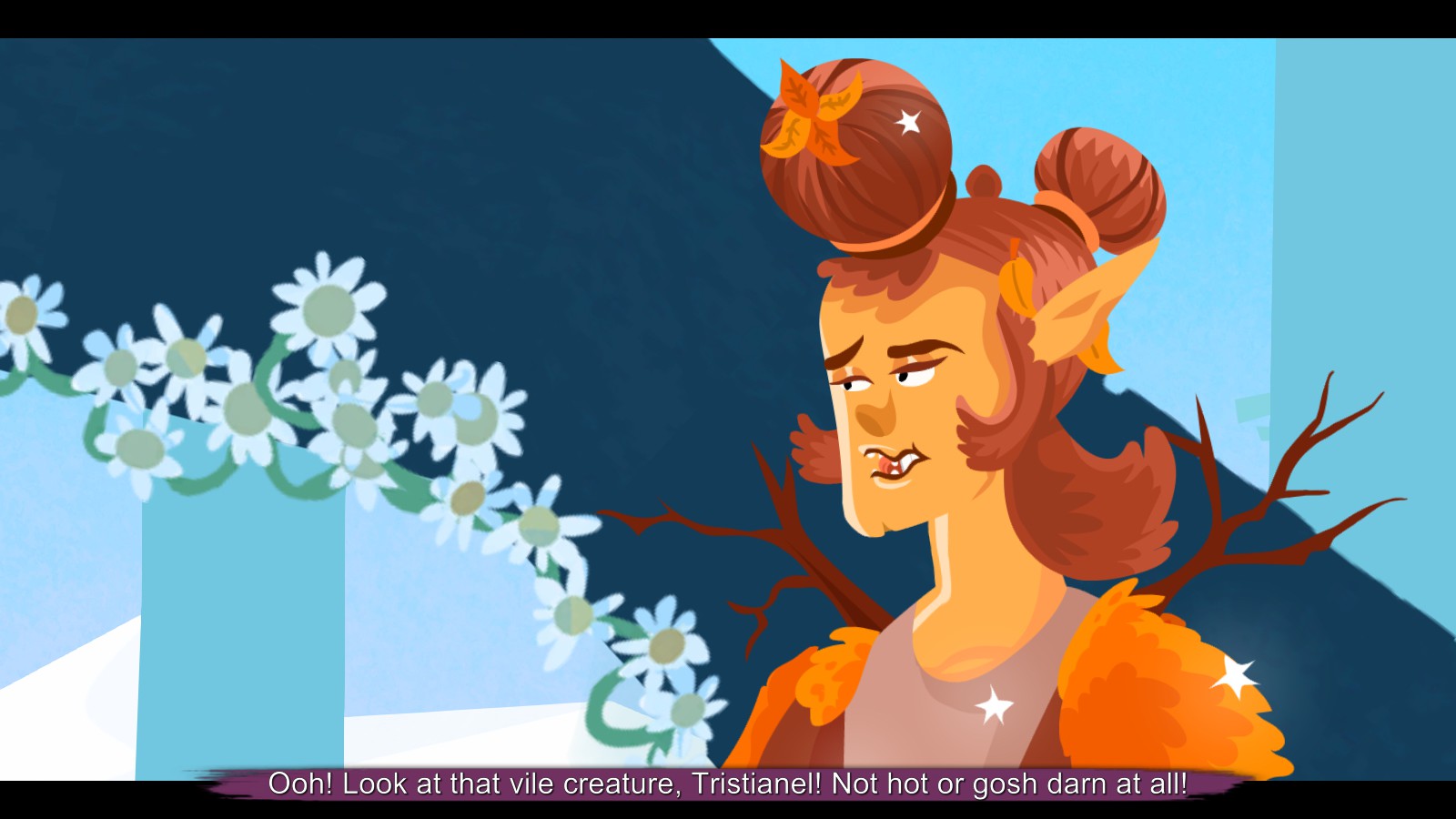 The humor will, of course, be hit or miss. Even more so than the humor in Manual Samuel. Here, the humor is more around the Allfather being an announcer tryhard dude, Pesto mispronouncing everything (and I swear it’s on purpose) and cringing at everything, breaking the fourth wall to make fun of the game itself, and putting humor with Bjorn’s situation. Most of the humor did hit for me, with some even growing on me as I progressed through, but Pesto never grew on me.

Helheim Hassle may have gone with a different style of humor that is kind of annoying, but the game itself is solid. When I went into the game, I just expected a straightforward game akin to Manuel Samuel, but instead, we get a game filled with a bunch of stuff to do and explore. The puzzles are well designed, this unique mechanic works pretty well with how it was implemented, I adored most of the characters (not you Pesto) and the art style is great as always. It may also help to know that you don’t necessarily need to play Manuel Samuel before this one as there are only a few references to loosely connect the two games. If you loved Manual Samuel and/or love puzzle platformers, Helheim Hassle is definitely worth it. I really hope Perfectly Paranormal will come back with another title. 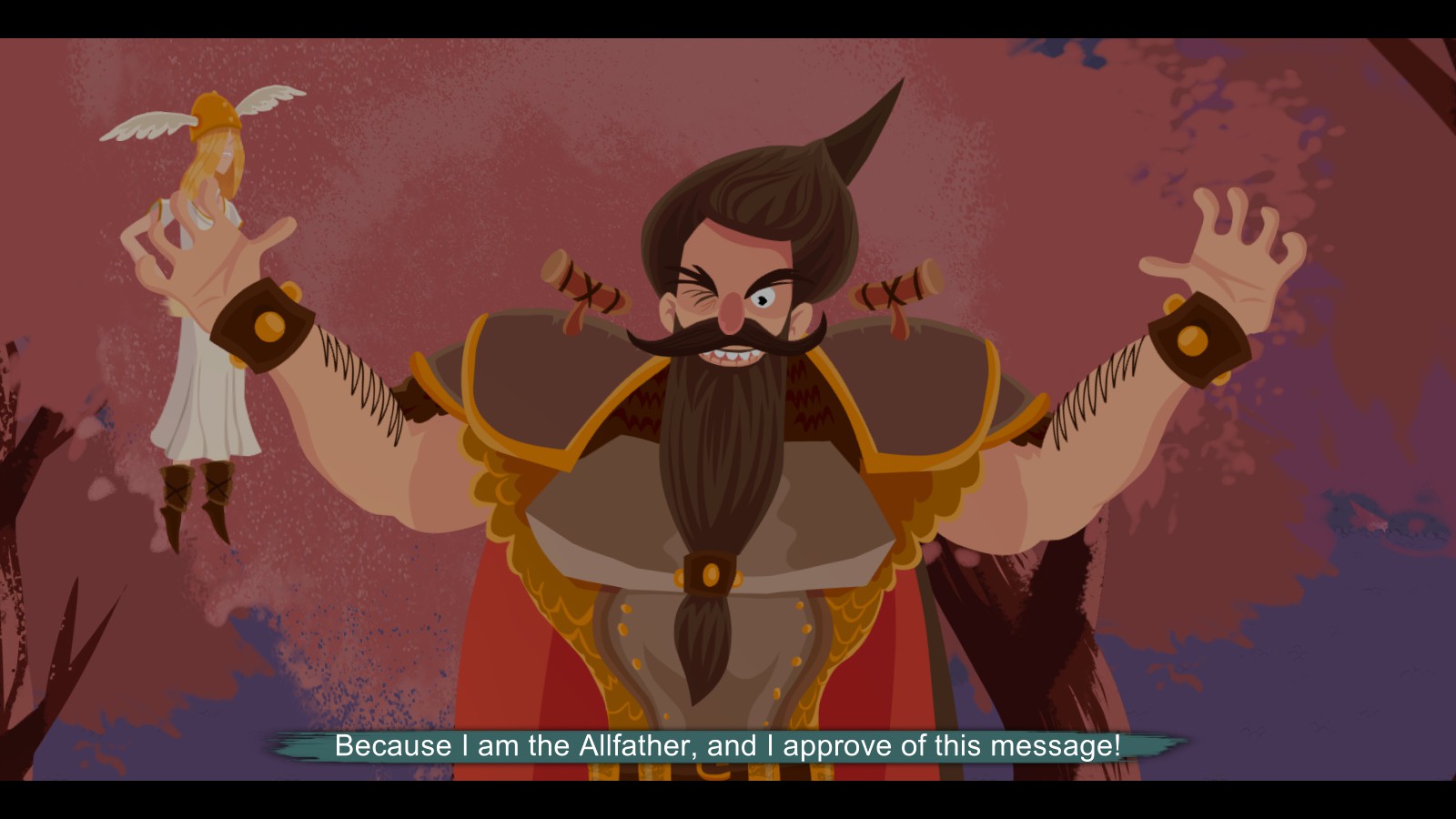