I never thought much of I, Dracula: Genesis. It dropped almost out of nowhere on the steam page and I sighed at the sight of another roguelite top down shooter…

Alas I am here now, eating my own thoughts as I, Dracula is ridiculously good, even more so for an early access title that released not long ago – in the end of May. While the perspective and animations will take a little bit of getting used to, the game is packed with excellent design, tense and fast paced bullet hell style shooting, on top of a very well done roguelite progression system we know and love. My best comparison would be Binding of Isaac meets Nuclear Throne and it is as good as it sounds, especially with the amount of content promised during the Early Access phase. 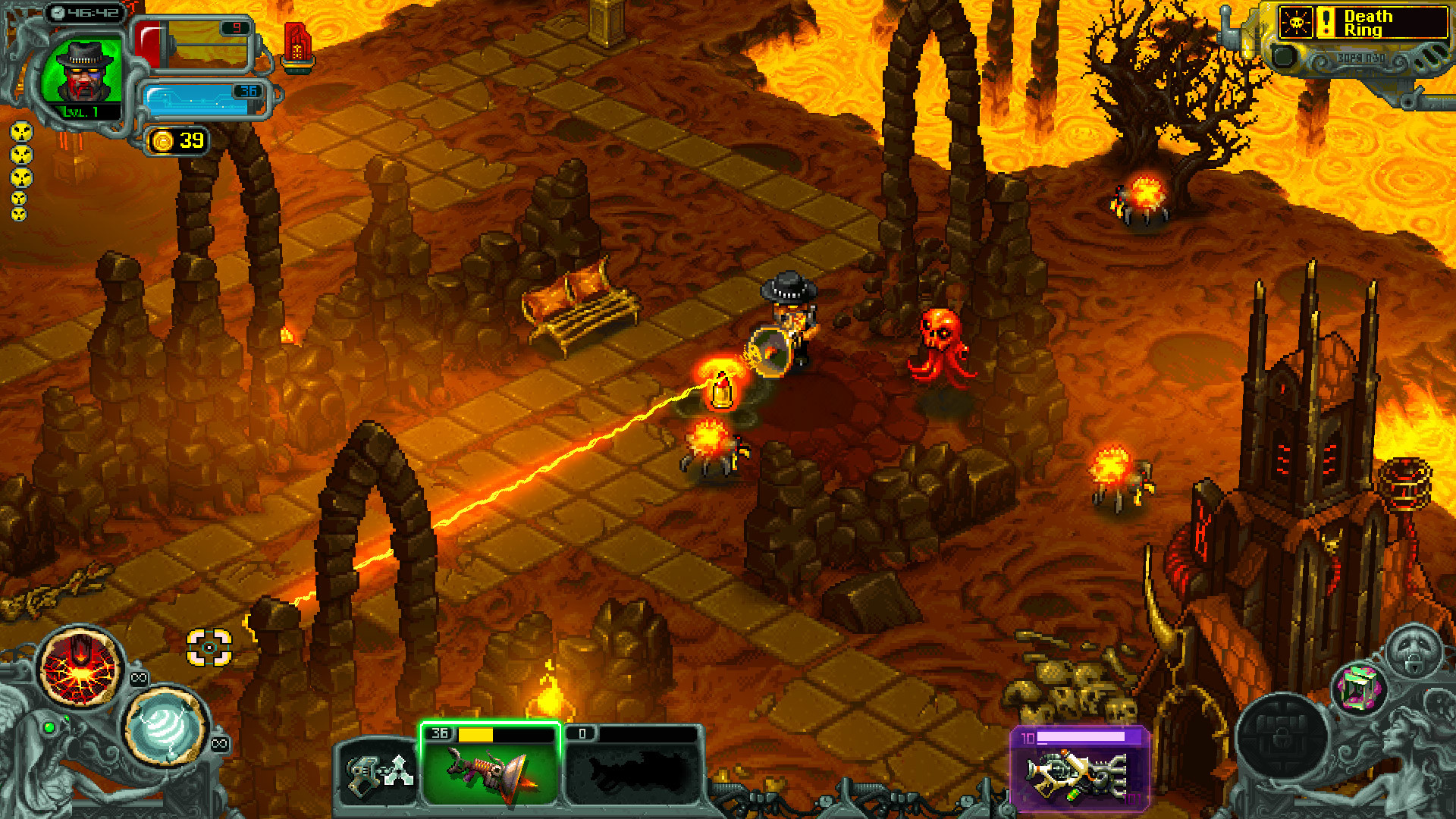 After a short but sweet tutorial, you’re thrown into a lobby where you can pick your character (there are 4 right now, with 16 more planned to be added!) with their own dodge mechanic and perks. After that, you pick the Universe (which contain modifiers for your run on top of changing the environment) and alter the run with further modifiers besides those the Universe gives you.

And you’re dropped right into the action. Instead of rooms taped together, I, Dracula goes for an island approach – each island works as a room, containing your typical roguelite content (challenges, shops, events, bosses, enemies, treasures, etc.) and you can then use a bridge teleporter to travel to adjacent islands. You can travel without the bridges but between islands there is a deadly environment (the first universe has toxic sludge, for example) which will kill you extremely fast so use the bridges at all times!

Combat is most of the game so that must be really well done and for the most part, the game nails it. It is responsive, impactful and extremely visceral with enemies exploding to bits and blood in an extremely satisfying way. Character and item variety is insane – you can not only modify the run/yourself but also guns, so you can have a machine gun that has bullets split two ways at the end of the range or a gun that shoots bones super quickly with insta-reload on a kill and so on. Not only are the guns extremely creative but the variety of the guns is further enhanced by how game changing the modifiers are.
You can enhance yourself as well with perks, from raw damage or health upgrades to more difficult choices such as sacrificing an attribute in shrines in order to complete a challenge and get a really strong buff (think of it like Devil Rooms in Binding of Isaac). 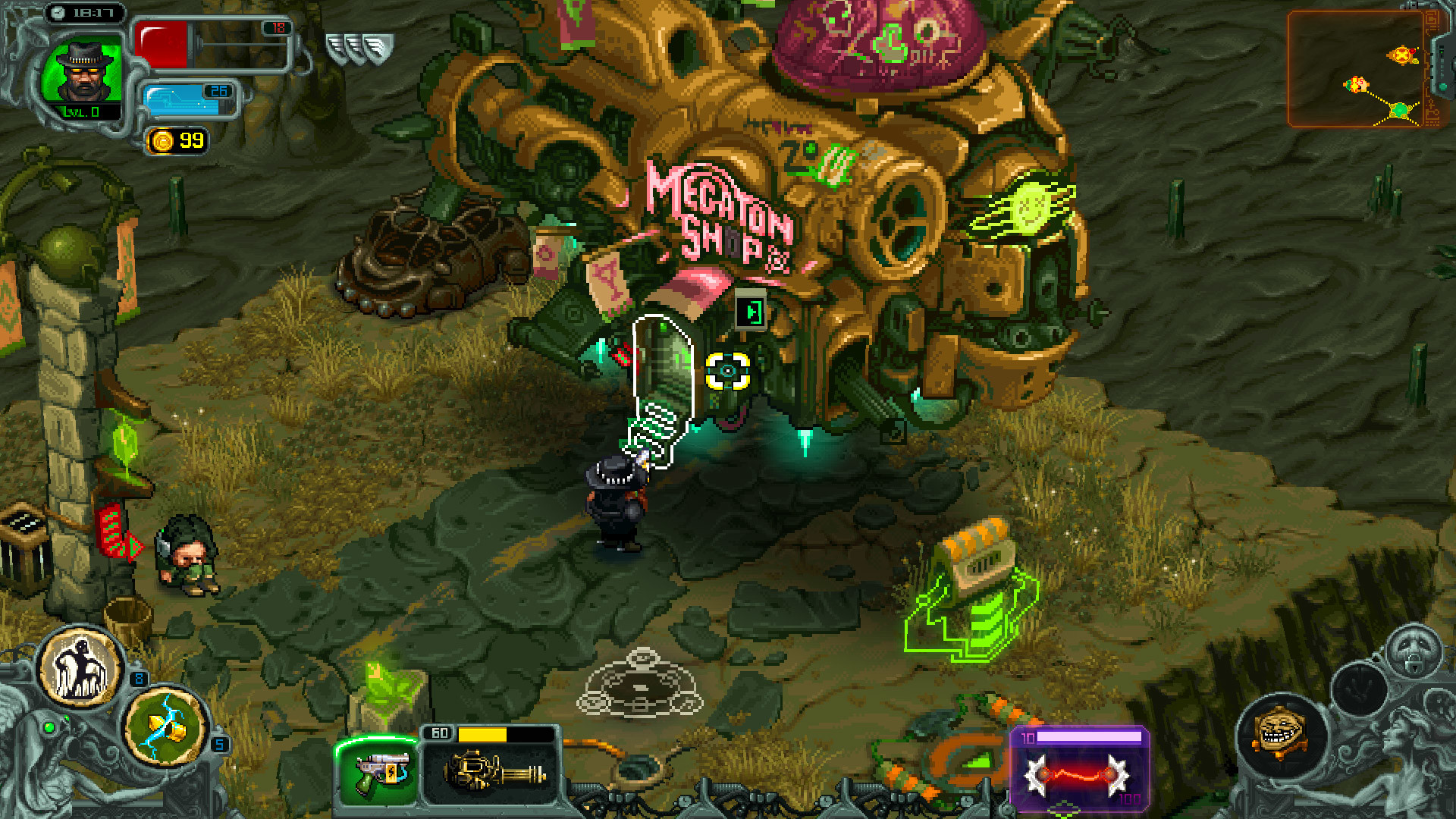 There isn’t much here that you haven’t seen in similar games, but I, Dracula has a very satisfying design tied to the gameplay as it has HUNDREDS of items and modifiers so the combat and the runs in general feel different every time, especially since you’ll be unlocking new enemies, items and guns as you play, giving the game even more variety than what you had when booting it up for the first time.

If I have a criticism to point out is the perspective, I am still trying to get acquainted with it but even after quite some hours I can’t accurately platform and reach higher spots or even just jump shoot crates, I feel I jump and shoot a crate and miss though my aim was dead on the crate and after repeating the procedure a couple times again, the crate finally gets shot and drops me loot. Some crates also seem like they are floating but can be broken with your character flat on the ground. These kind of oddities seem to be inherent to the isometric/top-down perspective of the camera (you cannot change the FOV/zoom either which is a bummer) so I can’t really figure out exactly how I’d fix this personally but I’d like to see at least a bit of better responsiveness from the jumping – it felt a bit too stiff for me.
Other characters beside the starting one have dodges and other kind of replacements for that but it also makes some characters feel better because of the weak jumping responsiveness of the first character.

Despite this rather small issue, the core gameplay of Genesis still is the combat, the shooting and melee and that is formidable, without a shadow of a doubt. One of the best feeling combat systems in a roguelite game I’ve ever played – as a fan of the genre, I have played a lot of them so I can really hammer this point, in my opinion: the combat is truly fantastic.

I, Dracula has a beautiful art direction that kicks in in the Main Menu, a pixelized sprite animated environment of desolation that just takes your breath. The gameplay further solidifies the art style with a mix of great animation, satisfying transitions and slick screen effects to convey the impact of the combat. Easily one of my favorite looking roguelites of the past few years. 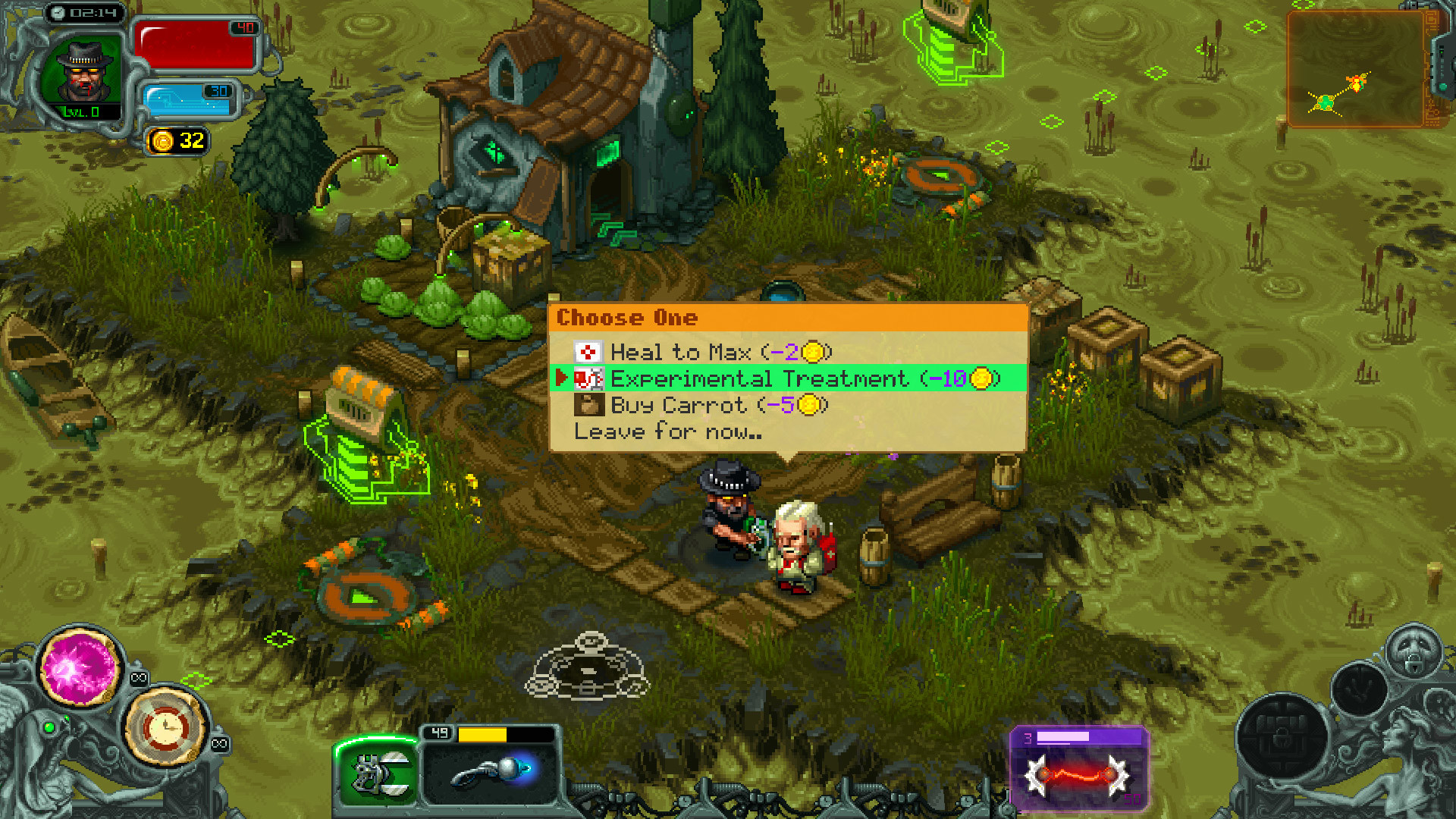 The UI could use a couple tweaks as during interactions, a bar is filled to indicate when the action is completed – an ‘R’ key is right next to it which you’d assume would cancel the action and it does… nothing. Guns don’t cycle with the bi-directional movement of the mouse wheel, so you have to scroll up to change for the next weapon and scroll down for the previous which is really, really odd (and no, you cannot change that). Not all controls are mentioned in the options menu either, which is really weird. Overall, minor issues easily fixable.

No performance issues of any sort were found and given the graphics, this should run flawlessly in pretty much any PC.

The game also benefits in the audio department thanks to solid music, fantastic gun sounds and the atmosphere is intensified by the sound design in general. It’s really satisfying playing a game with a great blend of solid visual and audio design.

I really enjoyed my time with I, Dracula: Genesis. Great gameplay paired with a really good art style, great animations and awesome sound design in addition to a cheap price of 13€ for the content you’re given… this game is a no-brainer recommendation.