Play as an immortal ninja with enormous jiggly breasts who likes to torture rabbit girls. Um … .

Huuma Mina – The Secret of Immortality (I think I’ll just call it HM for short) is the third Steam “boobie” game from indie developers,
Hajime Doujin Circle, after Cinderella Escape! R12 and Cinderella Escape 2 Revenge. I haven’t yet played either of the first two games, so this review is coming from a HDC virgin.

In HM, you play the titular Huuma Mina, an “immortal ninja with silver hair and silver eyes”, though you can buy her a hair style and colour change and some glasses with your first 1000 gold if you like. She’s being hunted by mad scientist, Arakawa Murasaki, who previously held Mina captive in order to extract her blood and try to learn the secrets behind Mina’s immortality. A statement by the developer says this is a sequel to his first game from 2013.

At its core, HM is a free-roaming third-person beat-em-up. It’s set across a series of blandly modelled levels with names like “City Park” and “Secret Passage”, interconnected by a teleportation system that Mina needs to activate before use by visiting each node. Not every area has a node, though, and some of the levels can take a couple of minutes to run across — even avoiding the enemies — so you’ll end up seeing a lot of the same boring scenery a number of times. Levels have set spawn points, which are refreshed whenever the level resets, which includes each time you visit the level and after playing a scripted scene. They don’t always spawn exactly the same enemies, but the pool of enemy types is small enough that you’ll see them repeated rapidly, over and over. 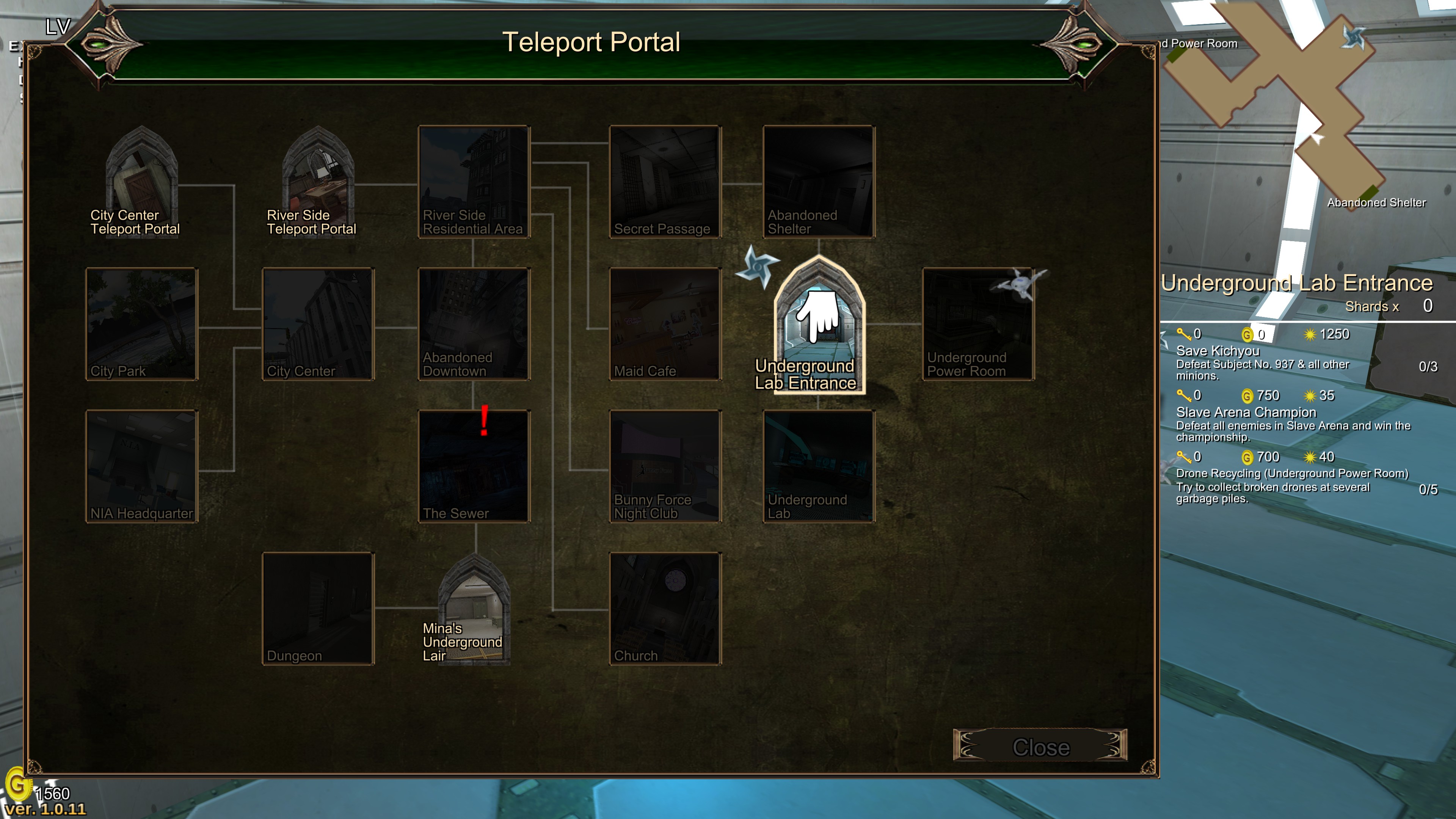 Controls are with keyboard and mouse or controller. The developer recommends a controller, though, and so do I. You’ll have left stick for character movement, right stick for camera rotation (press for target lock toggle), and two attack buttons and general interaction buttons under your right thumb. The controller setup then includes your two active skills on left and right trigger, and block and dodge on left and right bumper. In the beginning I found myself frequently getting the bumpers and triggers mixed up, but after an hour or so I was pretty right.

Apart from when I recorded a Let’s Play video — when I experienced a touch of controller lag that I’m not sure whether I should blame on the game in windowed mode or my recording software — the controls were extremely responsive. This is a very good thing, because one of the key combat tactics is the block-stun, where timing a block perfectly stuns the attacking character. Dodge timing, too, is hugely important, and the developer seems to have got this right as well. 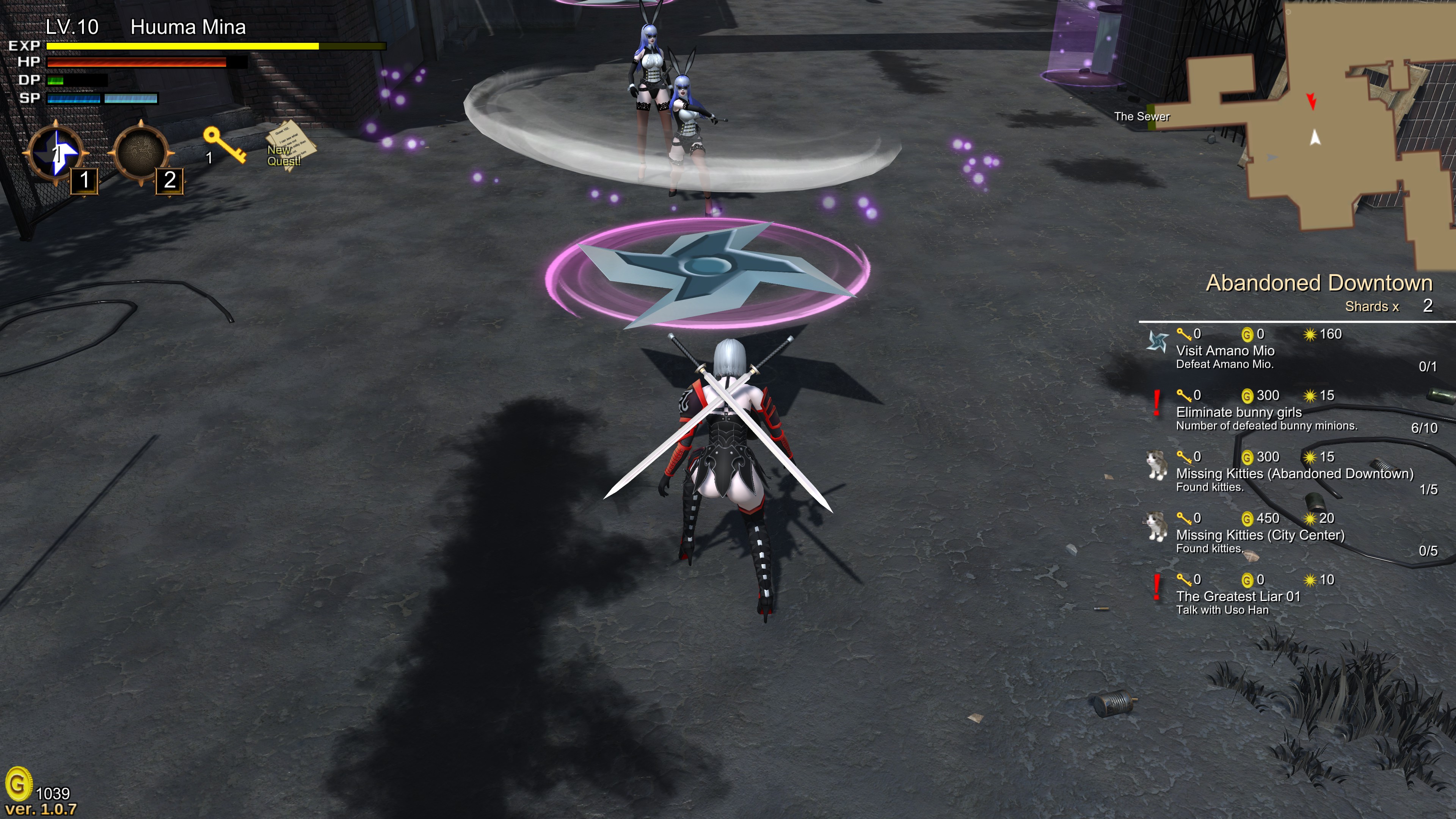 There are a couple of other key combat mechanics that I hadn’t seen before, though I read somewhere that combat is similar in at least one of the developer’s other games. First, not only do characters have health points (HP), but they also have durability points (DP). These represent the character’s clothing or armour, and are reduced with each incoming hit, while also limiting the amount of HP lost. More than that, though, when a character still has DP, her attacks can’t be interrupted by an incoming attack: combatants can keep swinging at each other freely.

Once DP is gone, though, a character loses her clothing — reverting to wearing her lingerie instead — and any incoming attack interrupts her and knocks her back. Given the very long chains of attacks, and that you’ll often have two or more enemies attacking you at a time, what this means is that, once Mina is reduced to wearing only her panties, you’ll be spending a lot of time hit/stun-locked, especially when you’re fighting in a confined space. This goes for the enemies, too, however, turning Mina into a very effective powerhouse once she’s managed to remove her enemies’ clothing. DP can only be recovered — and Mina’s clothes repaired — through the drops present at all save points, or by visiting one of Mina’s wardrobes. 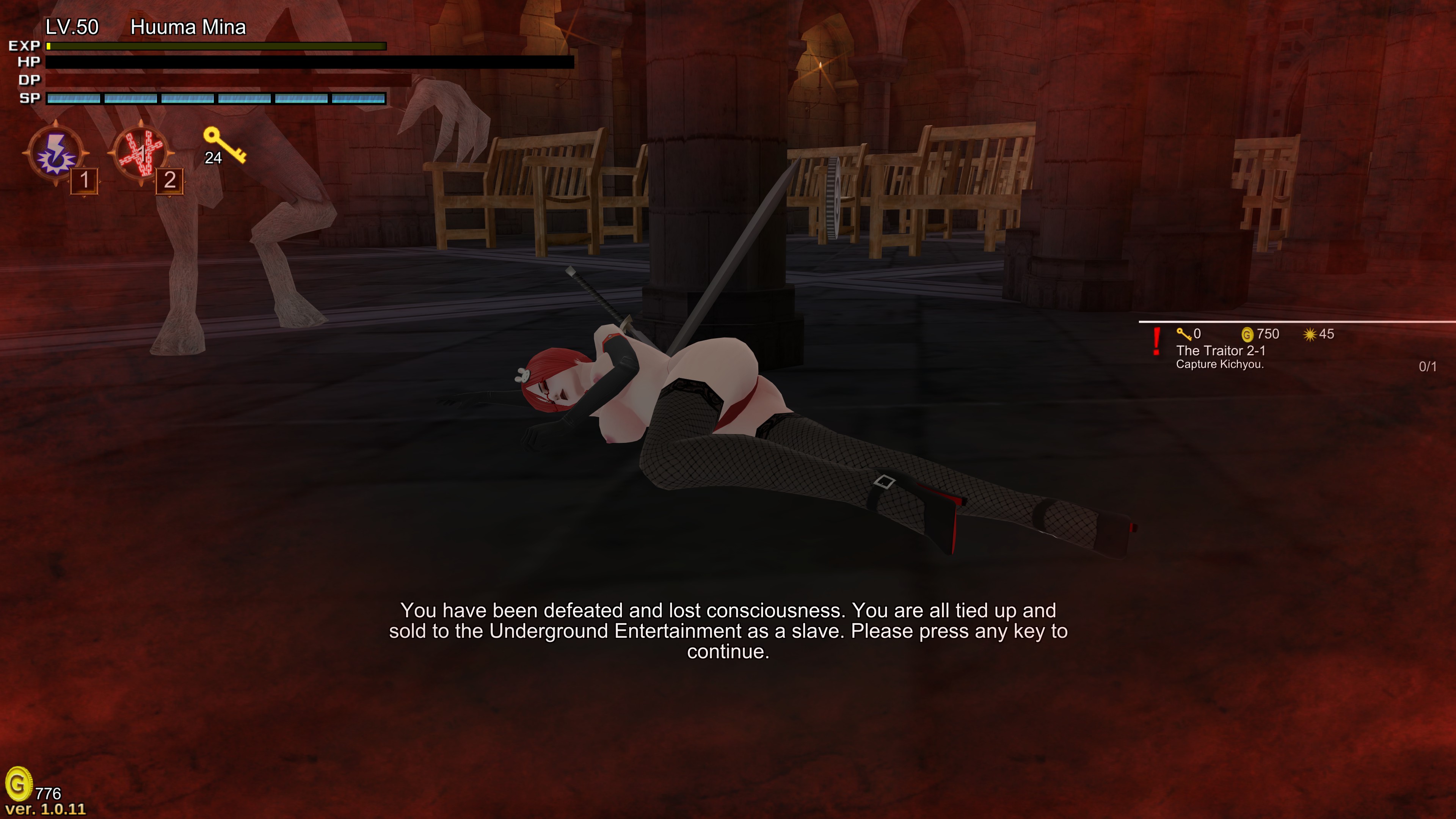 Given that Mina is immortal, even losing all of her HP isn’t a death sentence. No, instead she’s captured and sold to the “Underground Entertainment”, where she’s tied up upside-down in her lingerie, whipped, and then forced to fight a series of increasing-difficulty enemies in order to earn cash to pay for her freedom, with no weapons, no skills, and her arms and legs still tied up! She’s a resourceful ninja girl, though, so once you get used to the attacks and combos being a bit different in this state, many of the same tactics work here as in the normal combat sequences. 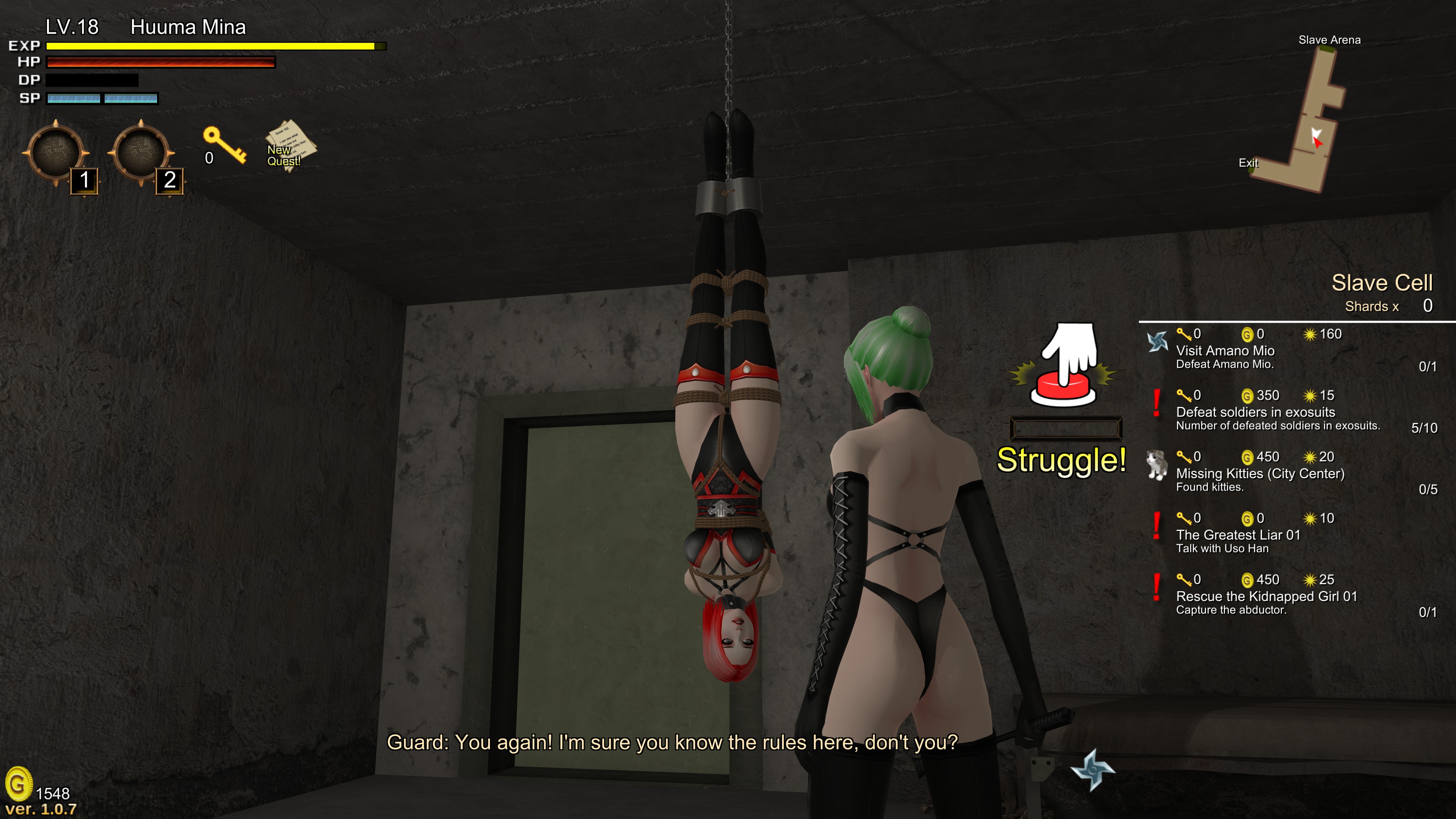 Mina’s combat stats increase with her level, which ranges between 1 and 50 based on your progress in quests and defeating enemies. At first I was expecting some sort of light RPG type of functionality here, but it’s all automatic: just a way to gradually increase Mina’s abilities as you progress. Areas are intended to be visited in a certain order, as each is inhabited by fixed-level enemies. I went to the riverfront area before the city center (Level 23 enemies as opposed to Level 12) and found it rather tough, but it’s possible to play that way if you want a bigger challenge at the beginning.

One of the first things you’ll notice about HM is that the graphics are very focused on boobies. The game is set in a sort of modern city, but it appears to be inhabited almost exclusively by large-breasted females. Oh, and annoying quadcopter drones (they don’t have boobies). The game only features two male characters, one of whom is completely nuts, while the other is the developer himself. Considerable attention has been paid to these girls’ breasts, too, with Mina and anyone she captures being able to be subjected to the player freely changing their breast sizes: from an impressive size to stupendously big. They also jiggle rather outlandishly with the slightest movement, like a sort of low-budget Dead or Alive 5 “OMG” mode. 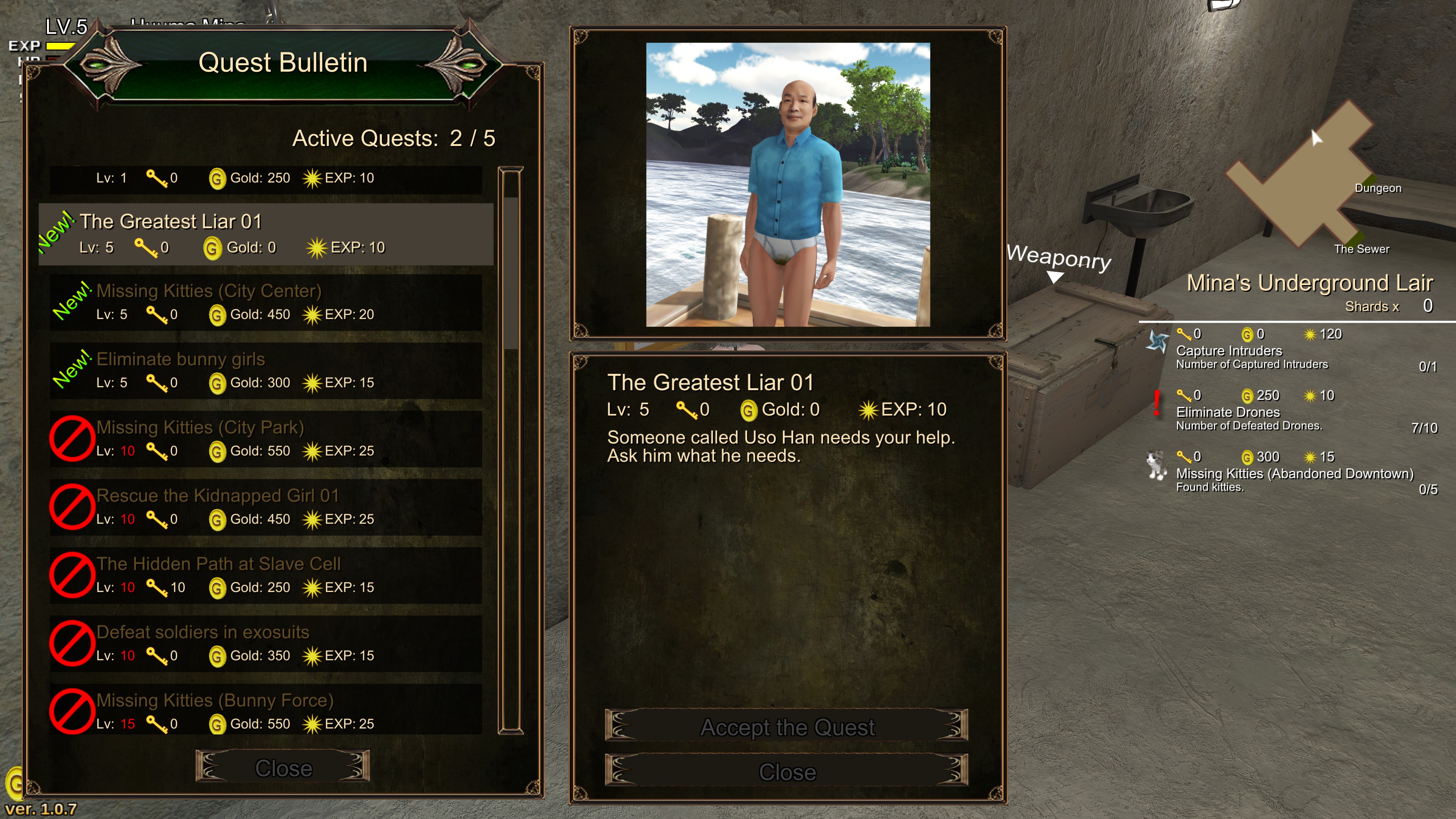 I’m thankful, then, that the characters are actually reasonably attractive, in a sort of medium-poly, anime-inspired way, and are much more interesting than most of the scenery. They’re mostly quite well animated, too though werewolves look a bit naff and Murasaki’s sexy strut lets the side down a little, as if she’s sliding across the surface rather than interacting with the world properly. Combat animations are pretty great and characters even have a few expressions, too, which is a nice touch.

As you play you’ll earn gold by collecting coins and defeating enemies. (ProTip: Ignore the coins; they’re not worth your time unless you’re spending it already looking for keys to unlock doors.) This can be spent on securing your freedom from the Underground Entertainment, but also on active skills, or boosting Mina’s combat stats through the purchase of the various wardrobe items. There’s a good range of these, even given that many options are simply colour reskins of others, and each purchase adds to the relevant combat stat regardless of whether you wear the new item or not; your total bonus in that stat is simply calculated based on the number of items you own from that category. This is great as it allows you to buy whatever floats your boat without penalty. Want Mina to run around in nothing but her panties? You got it! She’ll be just as effective as in her full suit of (skimpy) armour. 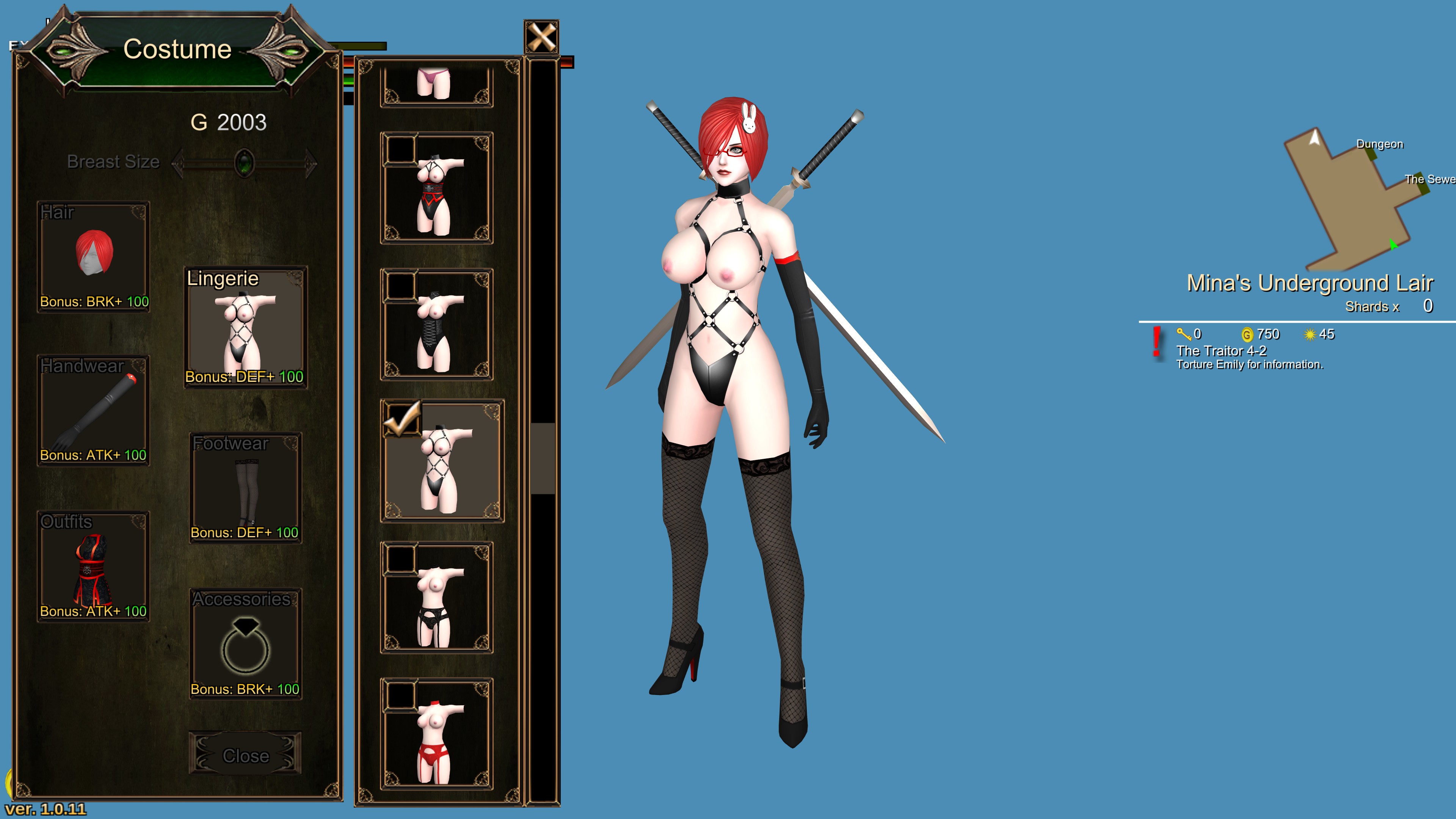 The UI is well designed, though quests take up a significant portion of the bottom right — I liked this, but some may not. Camera controls worked well, but I’d have liked to have had control of zoom as well, for some more sexy screenies. Clipping issues abound, too, which is a bit of a disappointment given the general attractiveness of the character models.

Audio lets the game down a bit, though, with only one music track (I think) in the credits and no in-game music at all, and passable sound effects, but no ambient sound, and the cat noises are really annoying. The script is laughable in places, and seems a bit tongue-in-cheek. I’m not sure if this is intended or a result of translation. It works well enough, but it can’t be taken very seriously. Grammar is mostly good, but there are a few errors here and there.

What’s All This about Torture!?

The game has a weird focus on torture, which some may find a little disturbing. Mina feels no remorse in capturing boss enemies and taking them back to her underground lair, where she fits them to one of her many (collectible) torture devices in order to break them and get the information she needs from them. 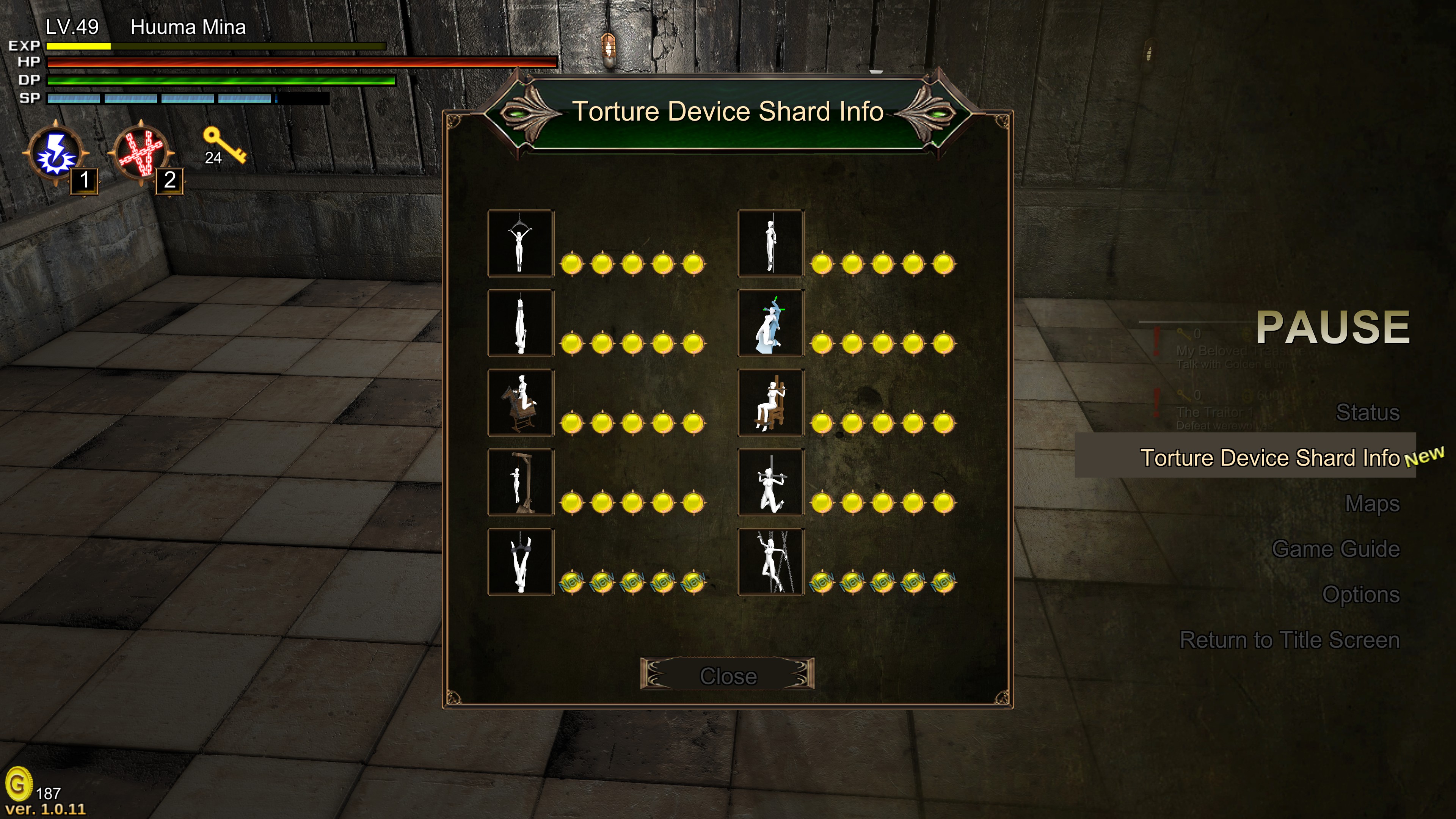 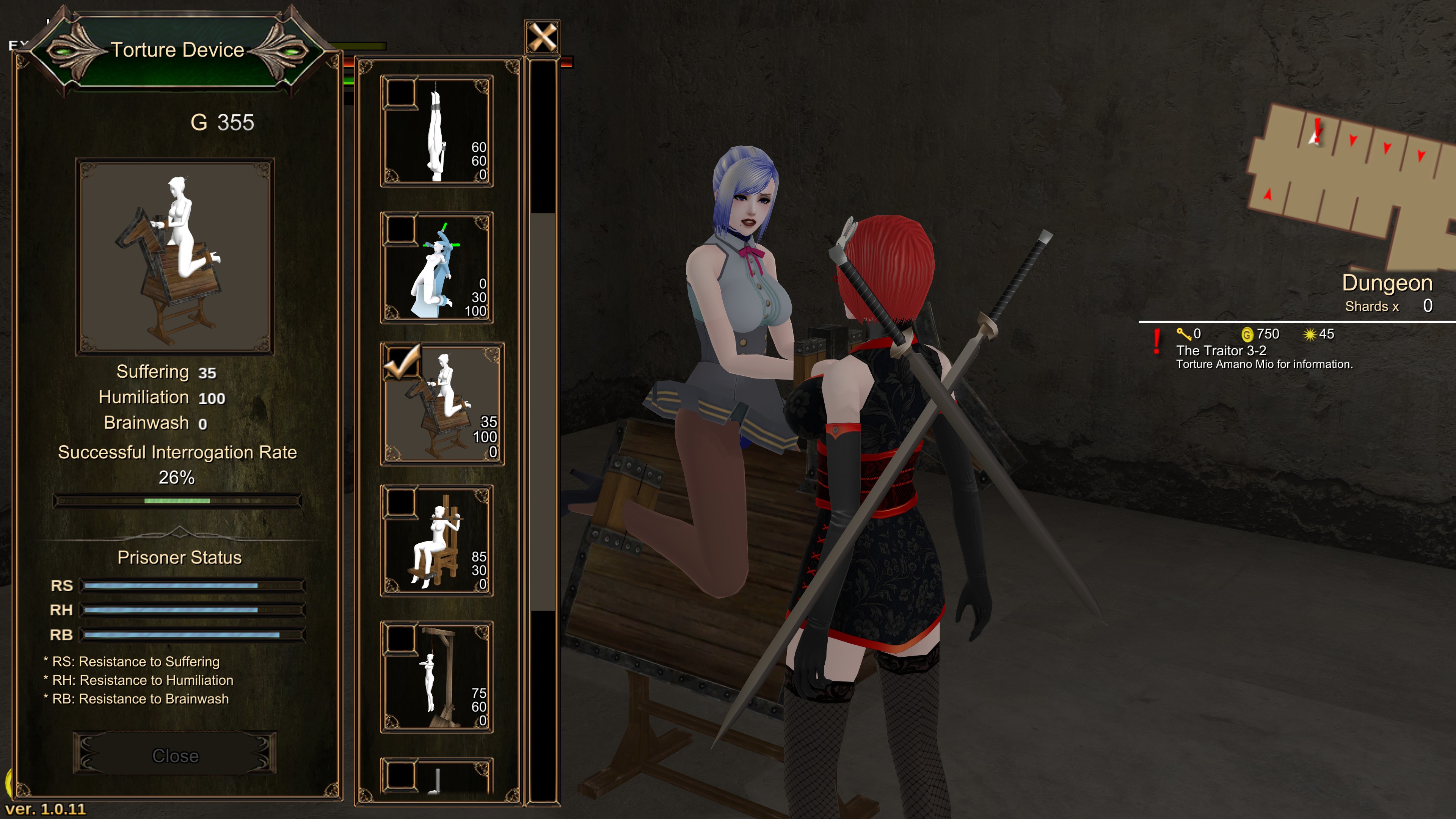 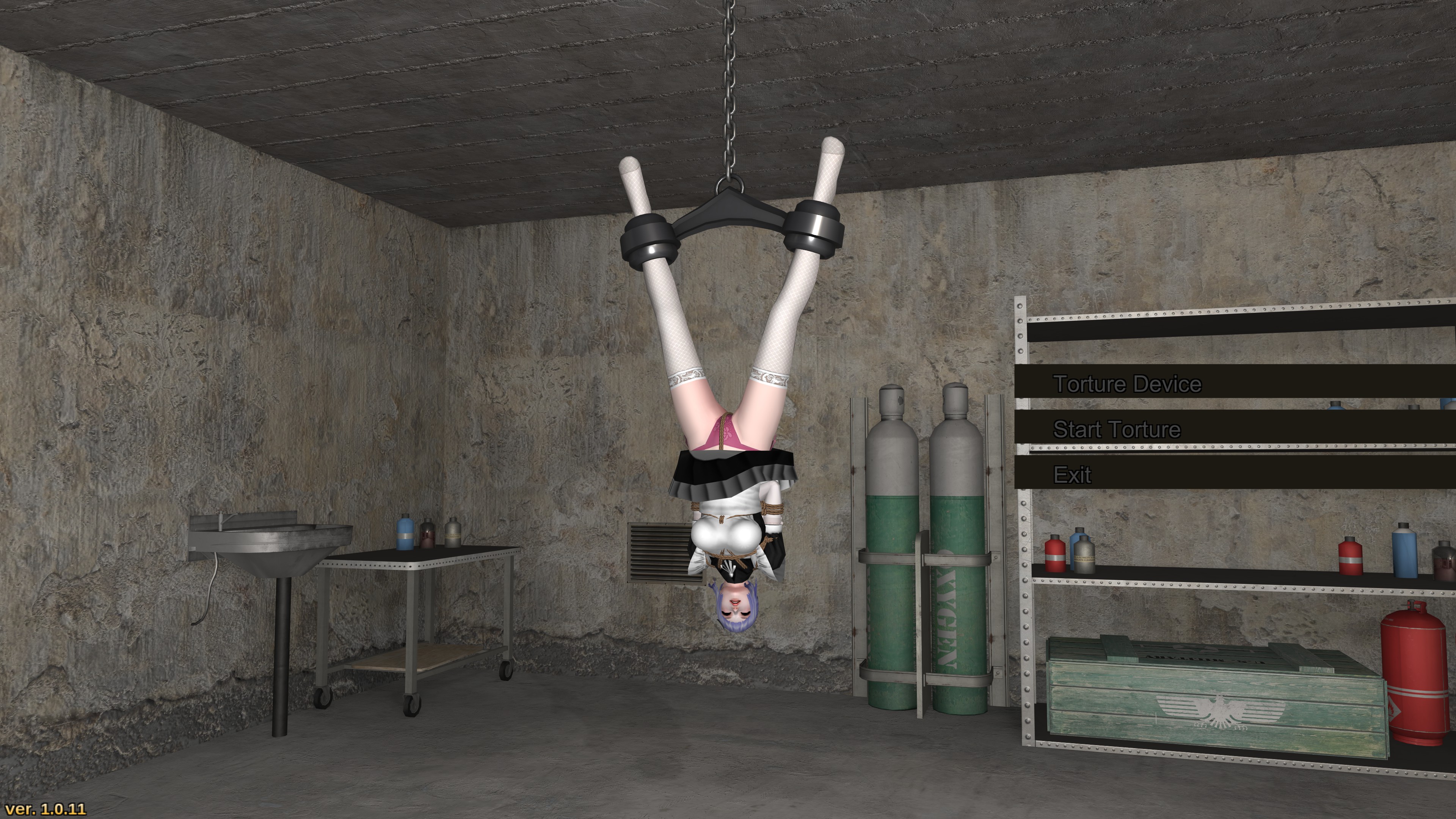 To be fair, the same happens to Mina during the course of the game, but I found it rather odd walking around “City Park” and finding little mini gallows, wooden horses, chairs with neck fastenings, and the like, amongst the plants and playground equipment. I mean, this is a game where it’s normal to see squads of scantily clad maids or bunny girls attacking people on the street. But even so … .

The torture minigame itself is rather boring, involving choosing one of your available torture devices to match your victim’s weakest resistance — Suffering, Humiliation, or Brainwash — then pressing a button when a constantly oscillating needle is within the green zone in the centre of a gauge until the character’s mental defences are depleted. Given that there are 10 unlockable torture devices, it seems a missed opportunity to use the same simple minigame for each one.

I played with the free adult patch, which I believe only adds the option to customise Mina’s or your captive’s clothing with the various topless and bondage-related items; the torture minigame and devices strewn around the game are present regardless. 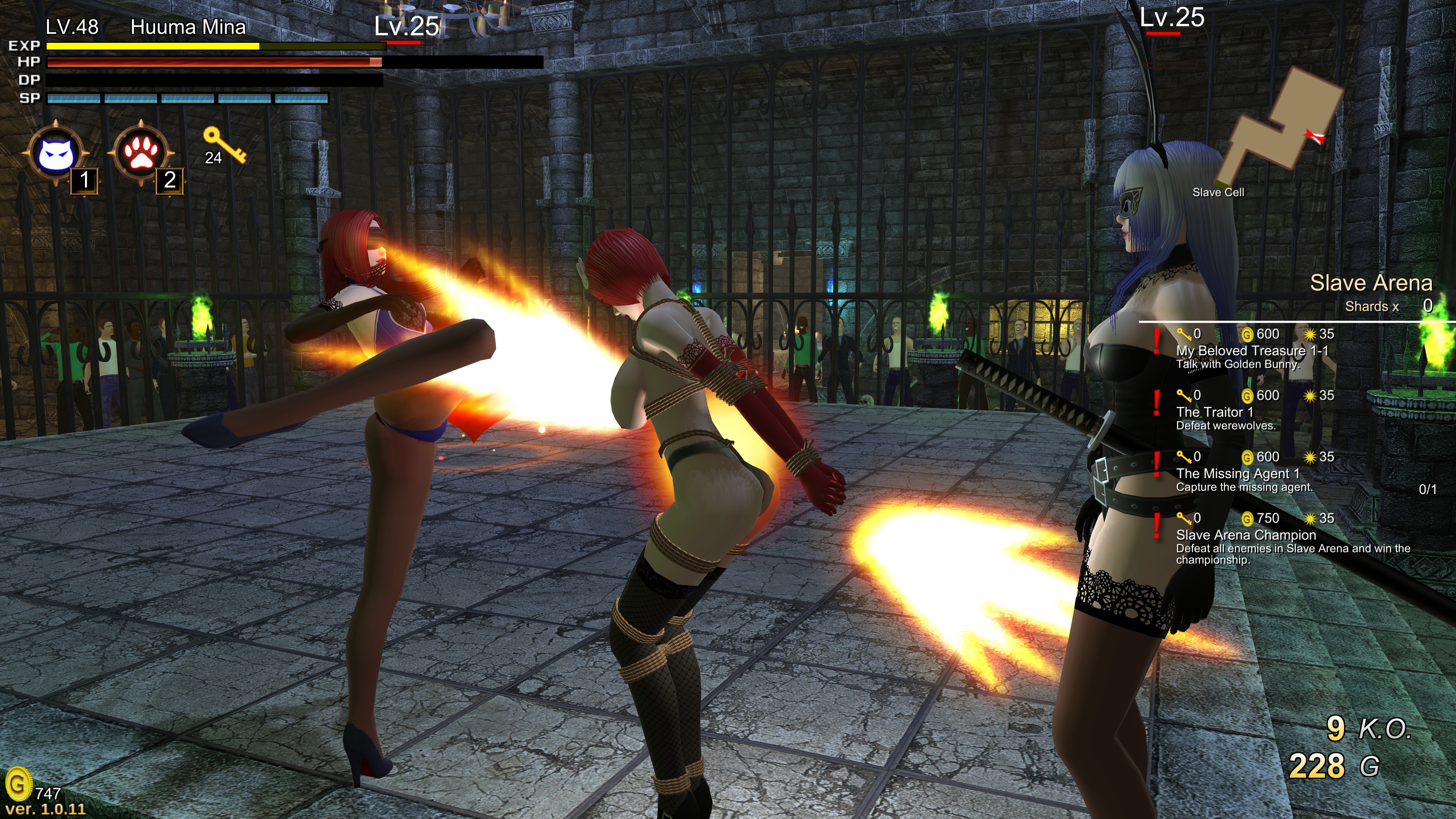 I enjoyed Huuma Mina: The Secret of Immortality more than I thought I would. The combat, though exceptionally repetitive, was also very fluid and responsive, though a little heavy on the stunlocks. The graphics, while containing exceptionally bland level design and modelling, featured great jiggle, surprisingly attractive and well-animated character models, and adult content (with the free DLC), though I’d have liked to have seen a full nudity option as well. Unfortunately, the script was pretty terrible, though with not too many grammatical issues, and the torture minigame was bland and boring, making it seem just a bit tasteless rather than a valuable addition to the game. The game is also very short, even including the end game content; I think the asking price is a little high for what’s here, but not unreasonable.

If you want a bit of adult-themed silliness with surprisingly fun combat, and the prospect of the torture parts doesn’t put you off, then Huuma Mina is worth 10 hours or so of your time.