Ys: Memories of Celceta is back and remasterfied. Oooo, is it better?

It’s that time again when an older game is remastered and released looking shinier than before. Seems to happen every few weeks these days, and this week’s remasterfication is Ys: Memories of Celceta. Ah, to be a red-haired rambunctious young adventurer, still in his teens and traipsing through dangerous lands without a care in the world. That’s Adol Christin to a fault. If you are unfamiliar with the Ys series, then look at this wiki because I’m certainly not going to rewrite the entire history of Ys in this paragraph, it is just too much and you’ll TL;DR it anyway. To sum things up, our wily protagonist Adol has wandered into town and can’t remember who he is or how he got there at all. Amnesia, ladies and gentlemen! In a video game?! Yep. For the millionth time we have an amnesia storyline. Not the most original of premises, but eh, it’ll do. Anyhoo, Adol meets up with his old pal Duren, at least as far as he can tell because he can’t even remember his name, and they go about checking out this dangerous forest no one wants to visit in order to find all of Adol’s missing memories. These memories are just waiting for him in these little blue bubbles that he touches which allow him to magically remember things again, bit by bit. This forest is named, you guessed it, Celceta. Thus, the game title. Nifty how it all links together like that.

Now, before I go on a bit about the game I’m betting you’re reading this review more or less to see if it’s worth it to get this game versus say the Steam PC version or just sticking with your PS Vita version. I have to say, this version looks better. How much better, you say? As with many remastered games, it’s a bit of a hodgepodge of betterness layered with dollops of HD redrawn images and some cleaning up of the character animations and static images. Here are some pictures so you can get a close look. 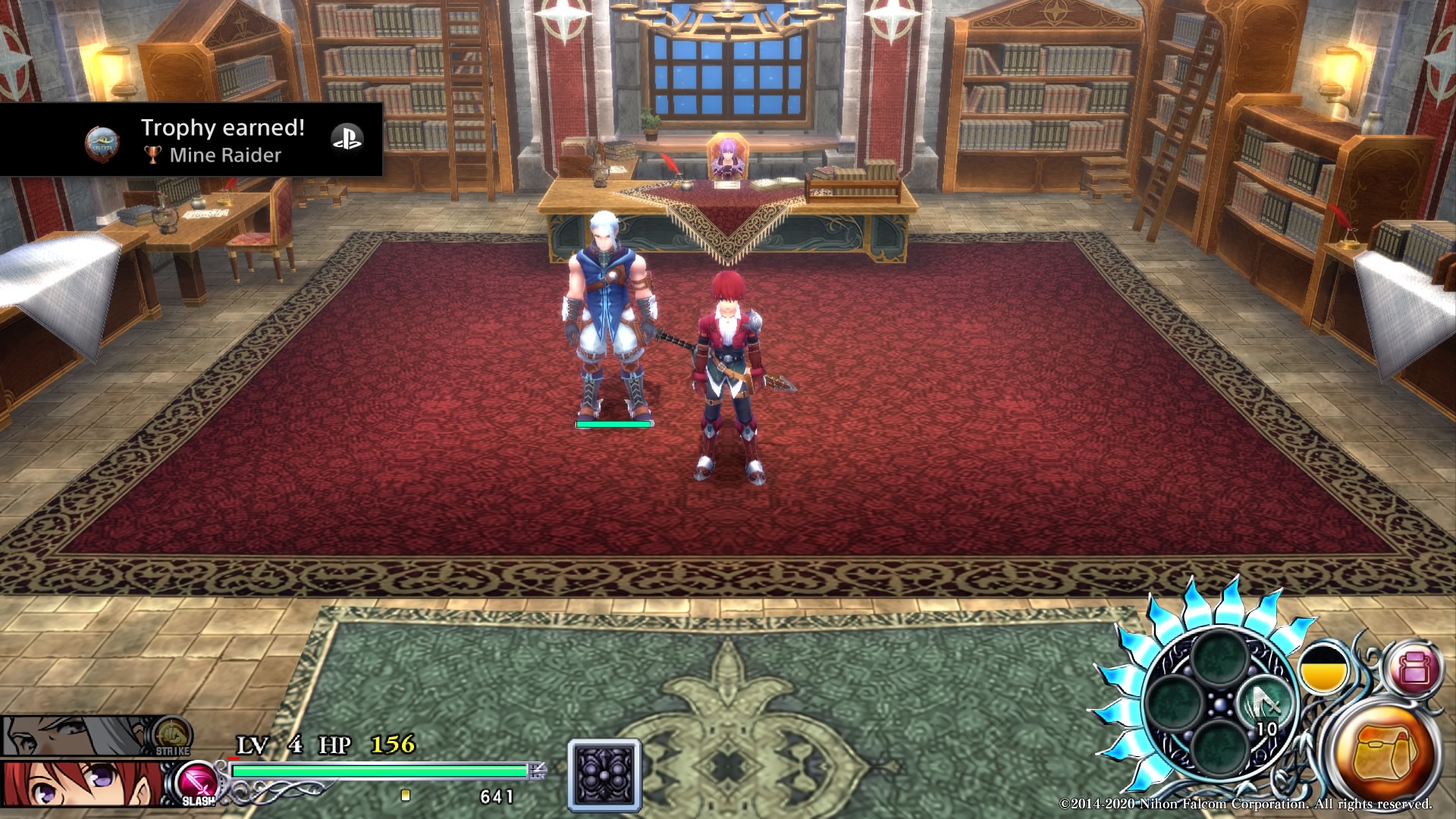 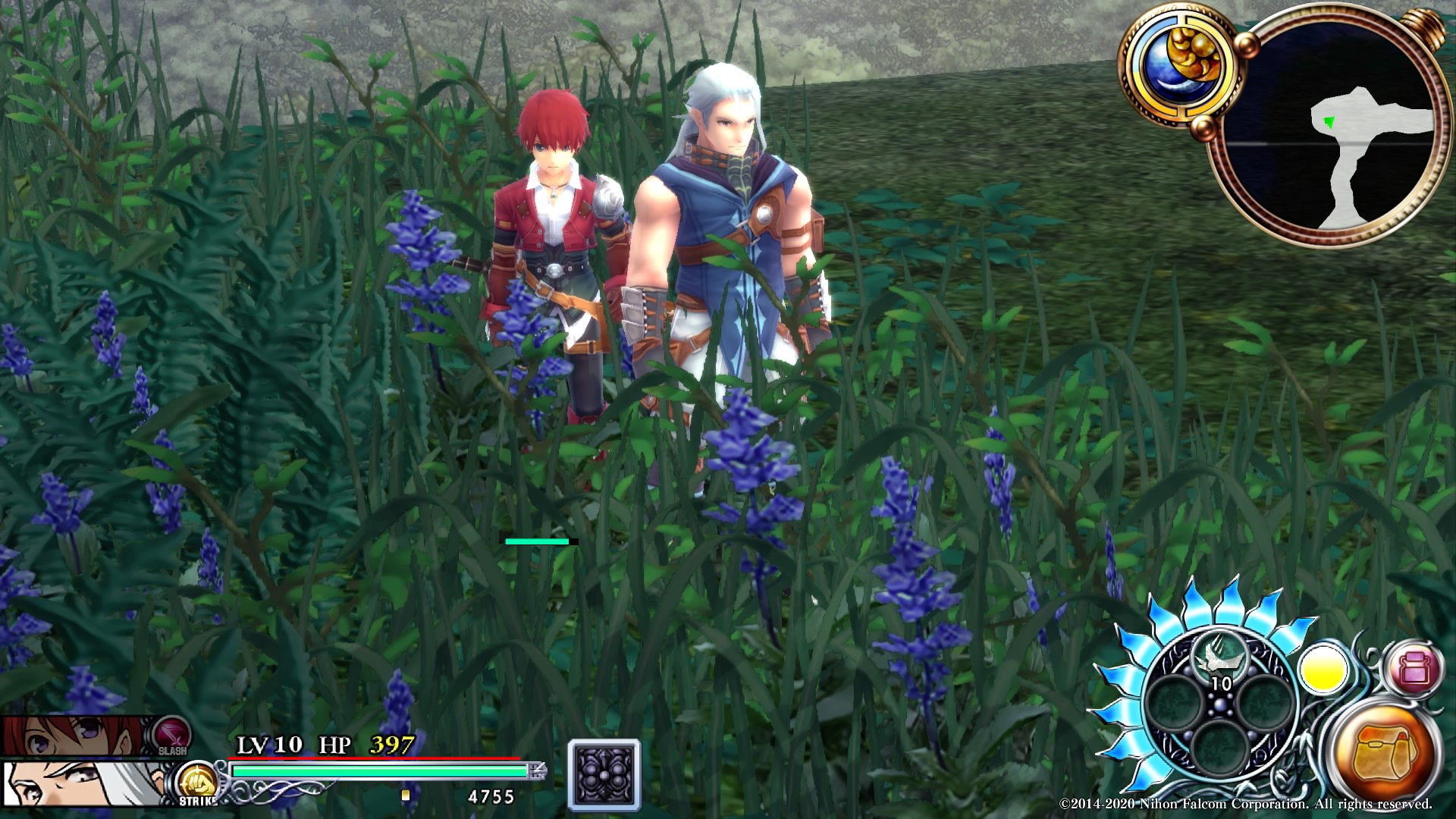 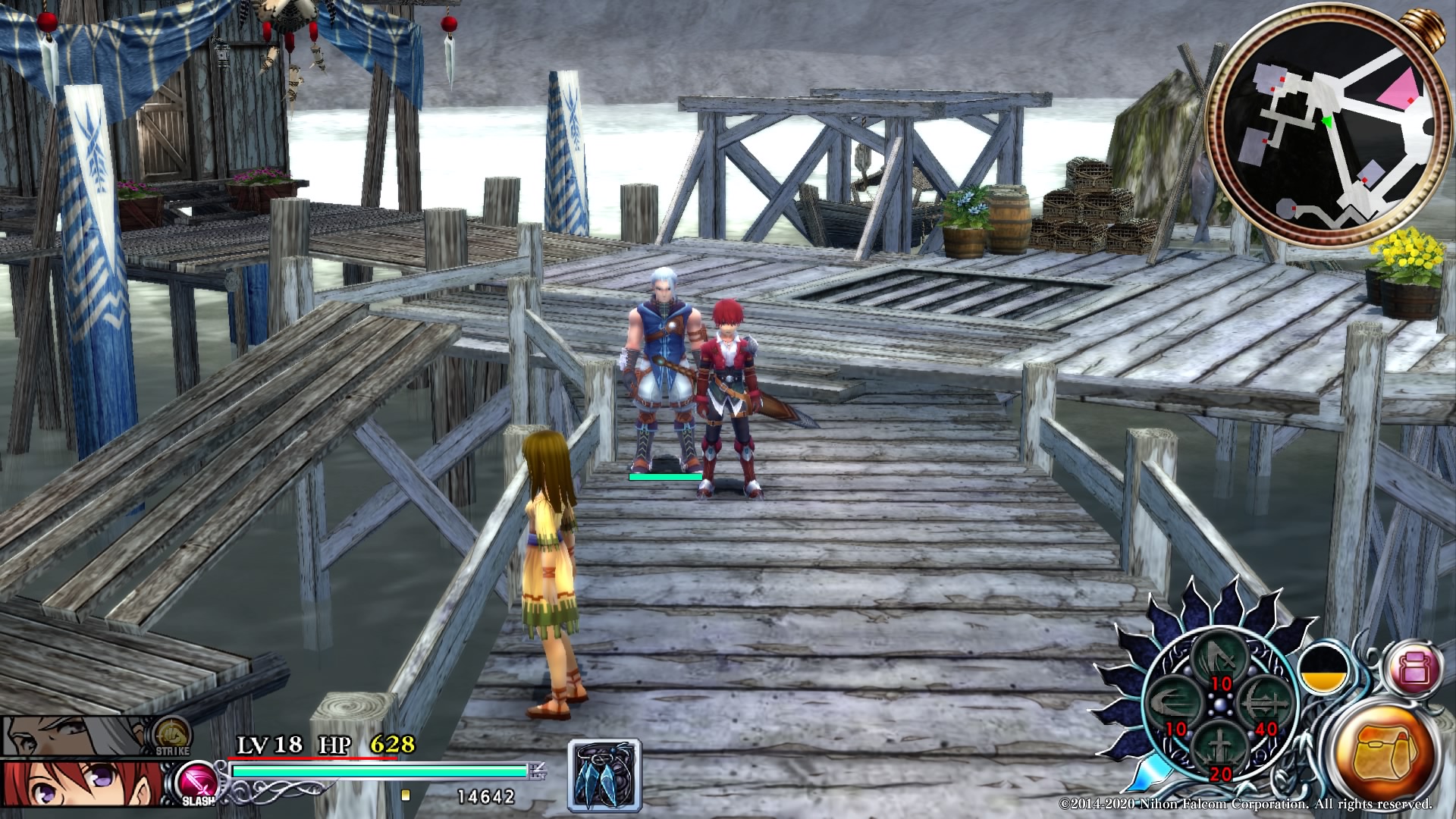 I don’t own the Steam version, but I did look at a handful of vids on YouTube for comparison and I believe the graphic enhancements are better overall. The water looks substantially better and some of the environments have slightly more fidelity, although not all. If you have a PC, I don’t think you’ll be missing all that much compared to the PS4 version, but I do think the PS4 version looks better and still runs at 60 FPS ( the PC version runs at 120 FPS or an unlocked framerate). There was one area in the middle of Comodo Village where the framerate stuttered just a wee bit, but that was all. Still, keep in mind this was a PS Vita game before and the graphic enhancements can only go so far. It looks decent for what is obviously a PS Vita remaster and the action of the controller is sublime. 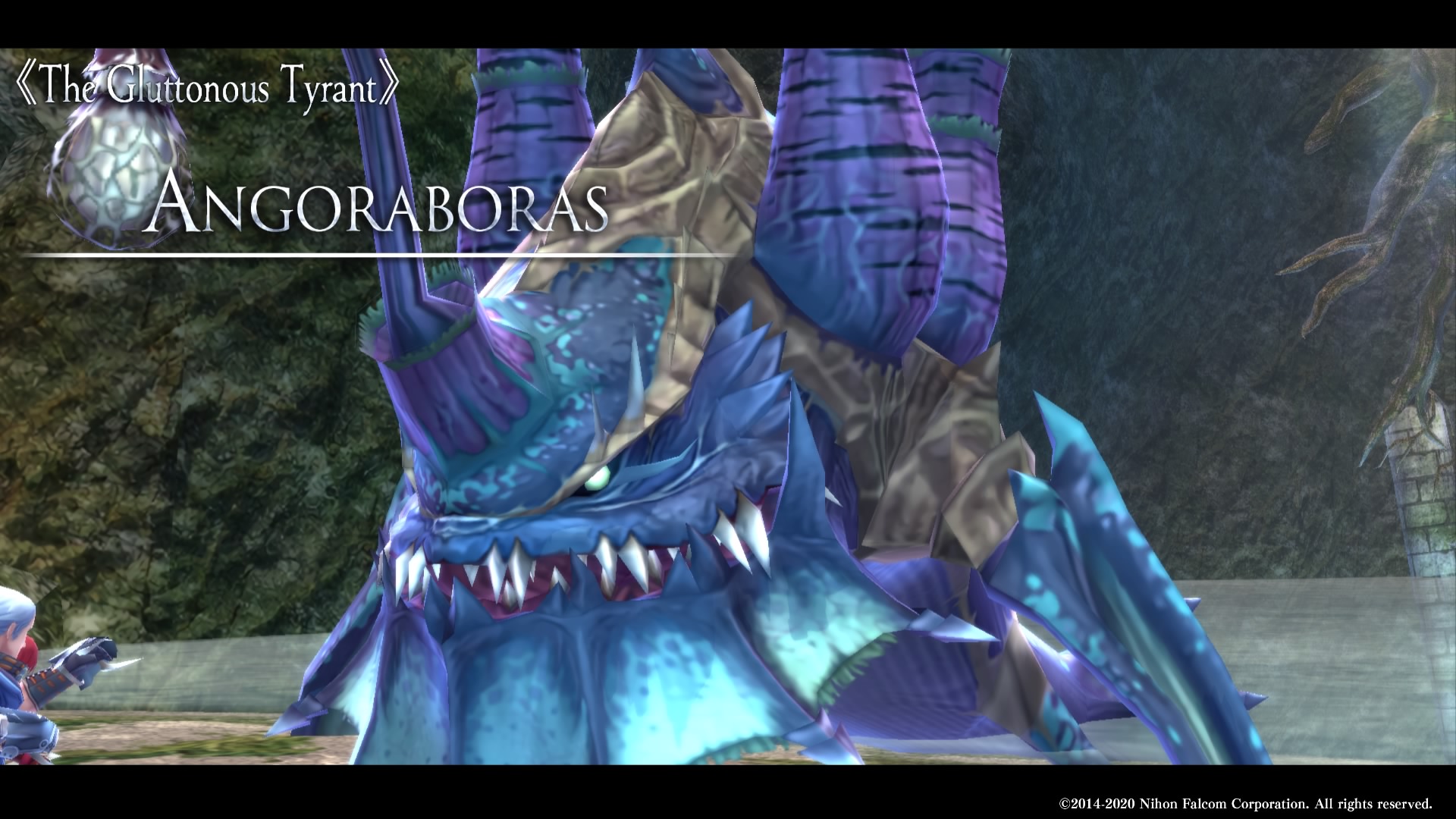 One big change is that you now have the option of Japanese OR English audio. Being a sub fan myself, this was the very first thing I changed and I’ve enjoyed the experience overall. I do have to note that there seriously isn’t as much dialogue as I was expecting. The majority of it is written text. You also can’t change the audio while reading the text for some reason, which is rather odd as I wanted to compare English to Japanese one right after the other, but was unable to. When you are out of a scene you can change it, though. Do keep in mind that for PC owners of the game, this audio upgrade is going to be FREE. So, don’t assume it is a PS exclusive feature. 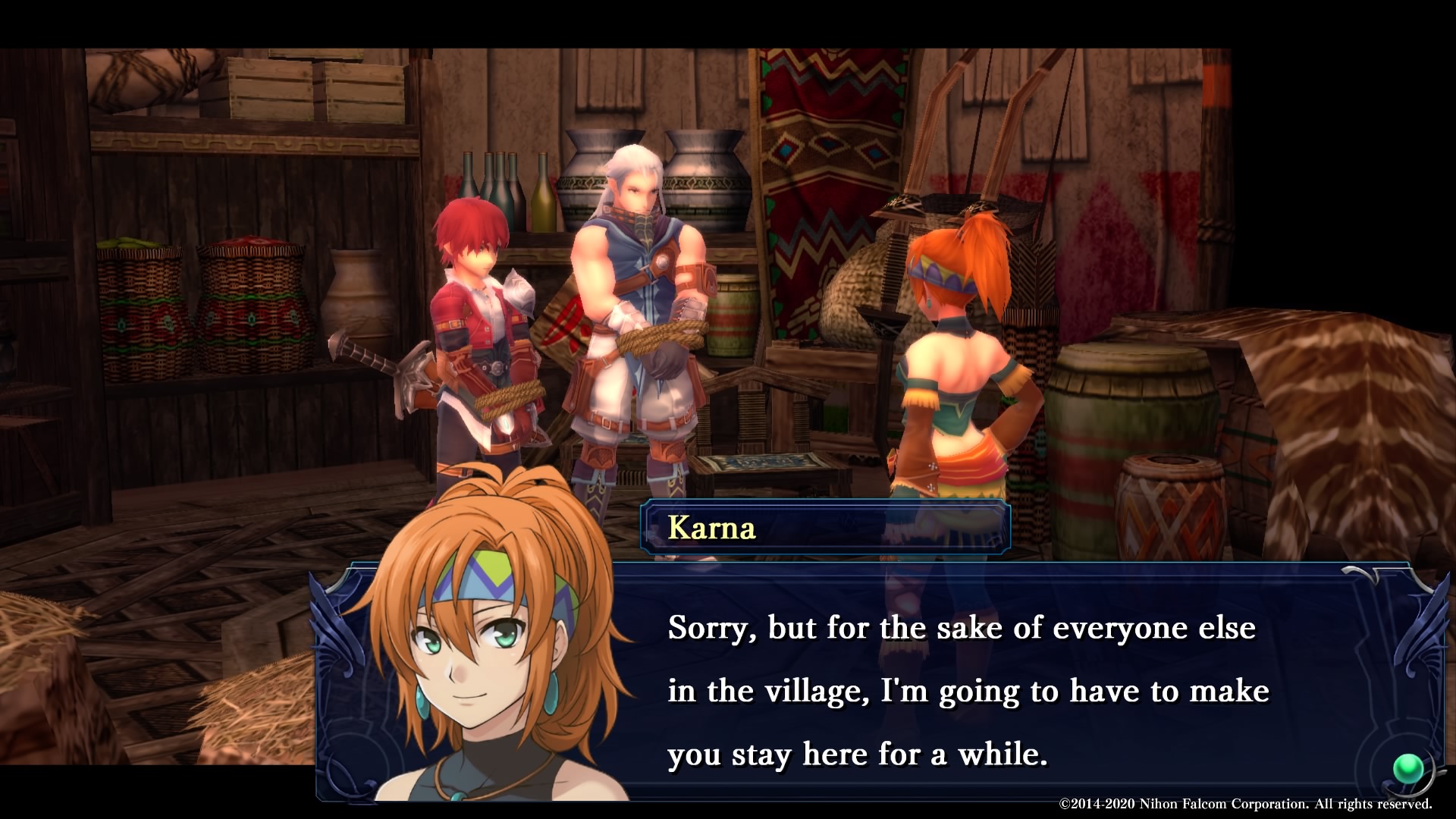 The narrative and story are designed around mapping. Adol basically explores the forest, finds a new party member in distress, and saves the day over and over as the story tidbits are dished out a morsel at a time. It’s an okay story that is mostly predictable, but you’ll also get some unforeseen hiccups to the drama along the way. Do keep in mind Adol doesn’t have much to say, so the brunt of the story is carried out by everyone around him. What little we do know about Adol is amorphous, as his memories are scattered into those little blue bubbles which are a bit of a chore to unlock. At least you get some stat boosts every time you get one. I think the story holds the game together more than some folks give it credit for, but it’s not going to be an epic tome if that is what you are expecting. There are also side quests, with some that are required, but most of them have terrible rewards despite being rather interesting to go through. After awhile, I just skipped the side quests. It wasn’t worth my time unless you are a completionist. 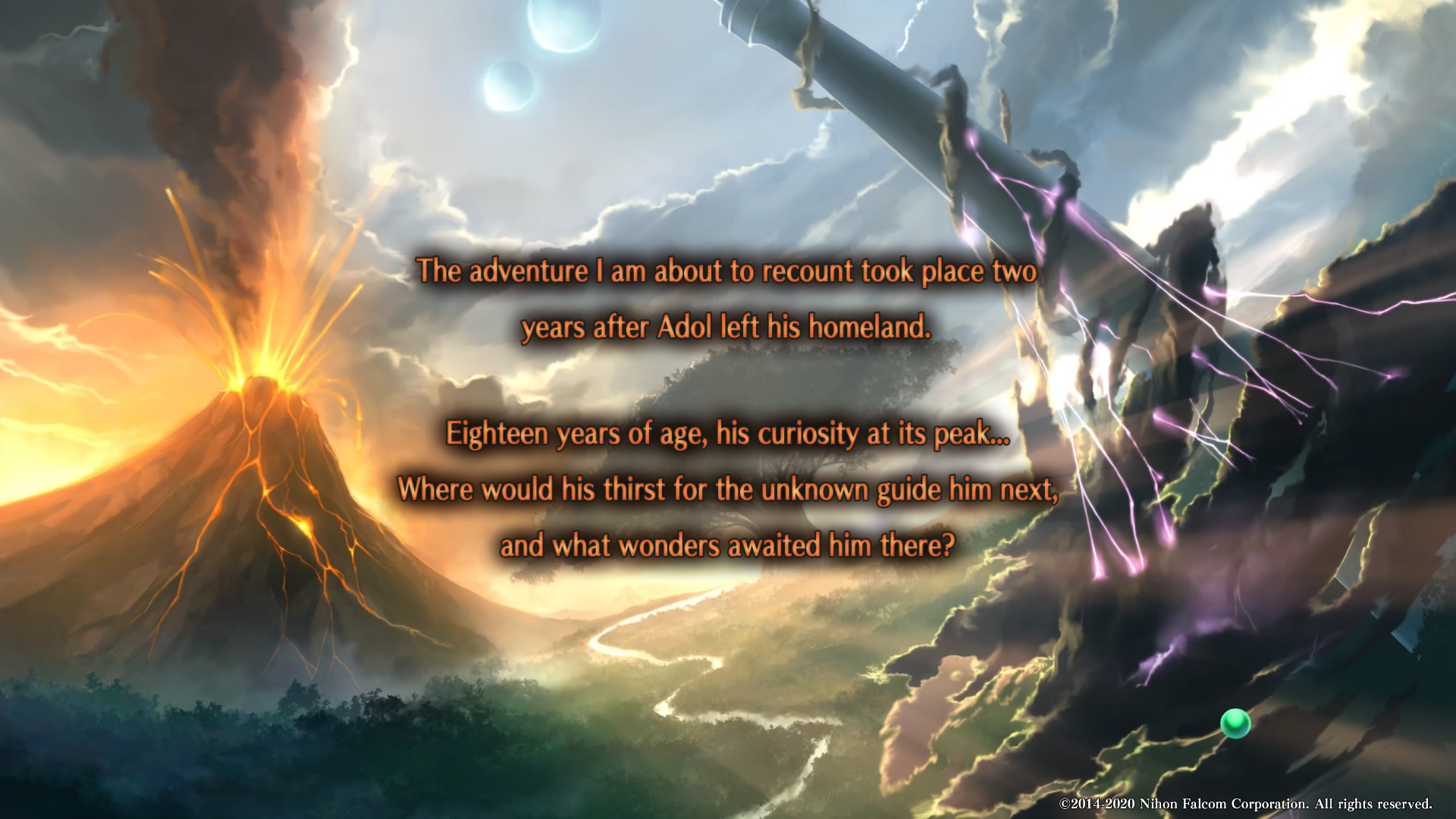 What Ys: Memories of Celceta does quite well is action, and it feels right at home using a Dualshock 4. You’ll be dodging and attacking in no time flat, complete with OP enemies within a very short time after starting the game, not to mention just past the halfway mark and more. It’s very repetitive, but also quite addictive. As you traverse open areas, closed knit forest routes, underwater passageways, and more you’ll get a full sense of adventure from the game, bar none. You can also heal in the forest just by standing still, a huge plus in my book. It doesn’t work in caves, though, so keep some healing potions on hand. 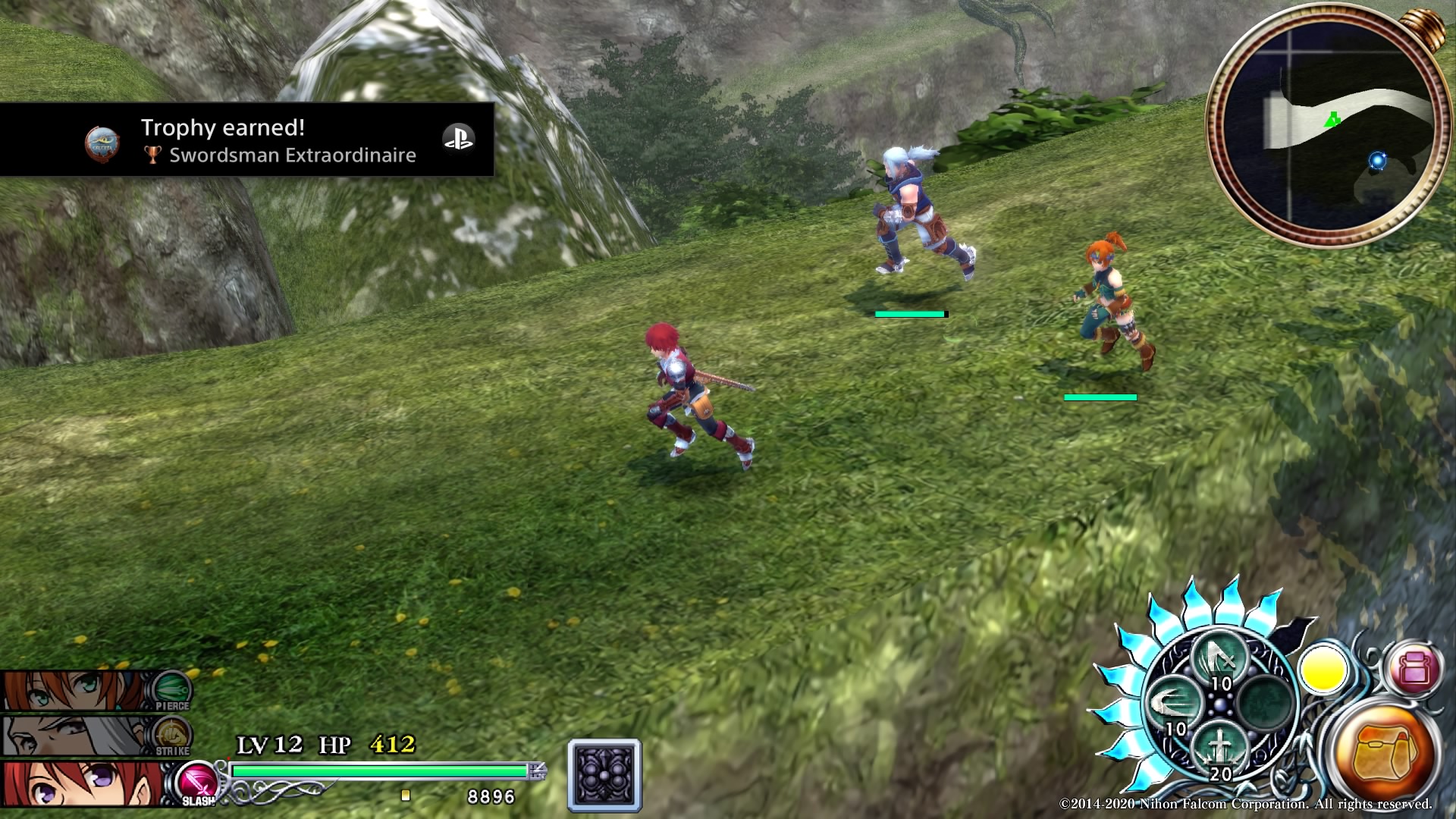 Don’t expect to play entirely as Adol either. A key feature of the game is switching characters to attack enemies that are weak to their attacks. Quickly press the red circle button and you’ll switch to another party member who may have a better advantage with a ranged knife attack, or a spear attack against water enemies. These abilities can also be used to crack open rocks to uncover hidden areas of the map, so being familiar with your party members is paramount. On top of the usual attacks are chargeable specials that replenish with regular attacks along with a two button ( configurable to one button too! ) extra special OP attack that takes forever to charge but gets the job done when used on a boss. The action is all about balance and having fun jumping back and forth between characters and knowing when and where to attack. It’s fluid and fast combat that is very enjoyable. The enemies can often feel like fodder, though. The real fun is in exploring the map, unlocking areas, and final bosses. Most enemies are more an annoyance than anything until you get to some decent battles.

Should you buy Ys: Memories of Celceta for the PS4? Well, if you only have a PS4 I’d say sure. My advice is the digital version at $30 as that base price feels perfect for what you are getting in return. You could probably also snag it on PC for less, likely around $18 during the summer sale, and it’s not substantially different than the PS4 version. Given a choice, and keep in mind this assumes you have $30 of disposable income itching to leave your wallet, I’d say the PS4 version looks better and feels great on a Dualshock 4. Or, you could just buy the Steam version and use the Dualshock in Big Picture mode. Both would work. The only thing the game is missing is local co-op. It’s a shame you have a party member RPG and are only able to play with one character at a time. Life is more fun in co-op!

Is it worth getting? If fast and switchable combat sounds like your bag then yeah at the very least wishlist this right now, it’s a fun game and the story is decent too. With 60 FPS, some graphic enhancements, both Japanese and English audio, along with being able to play it on PS4, this is a great choice for ARPG fans who have an interest in the Ys series.