A phenomenal game that went under way too many radars.

With that said, I hate how Quantum League was marketed and subsequently released to barely 300 players on a good day. After a relatively successful beta I MASSIVELY enjoyed with friends, we all made a sort of pact to get the game on release. This was back in February.

After little to no news on price, release date and such, the game’s flame just disappeared with time. Fast forward to now, May, we have a relatively uninspired release of a FORMIDABLE game I want to recommend to everyone but I’m finding a hard time doing so due to the lack of players to truly enjoy this Multiplayer only title. A lot of my friends even backtracked on buying it because of this, some even forgot about it entirely… and this is why I feel the game could’ve had a much more solid release.

The game itself is truly fantastic though and let me tell you exactly why. 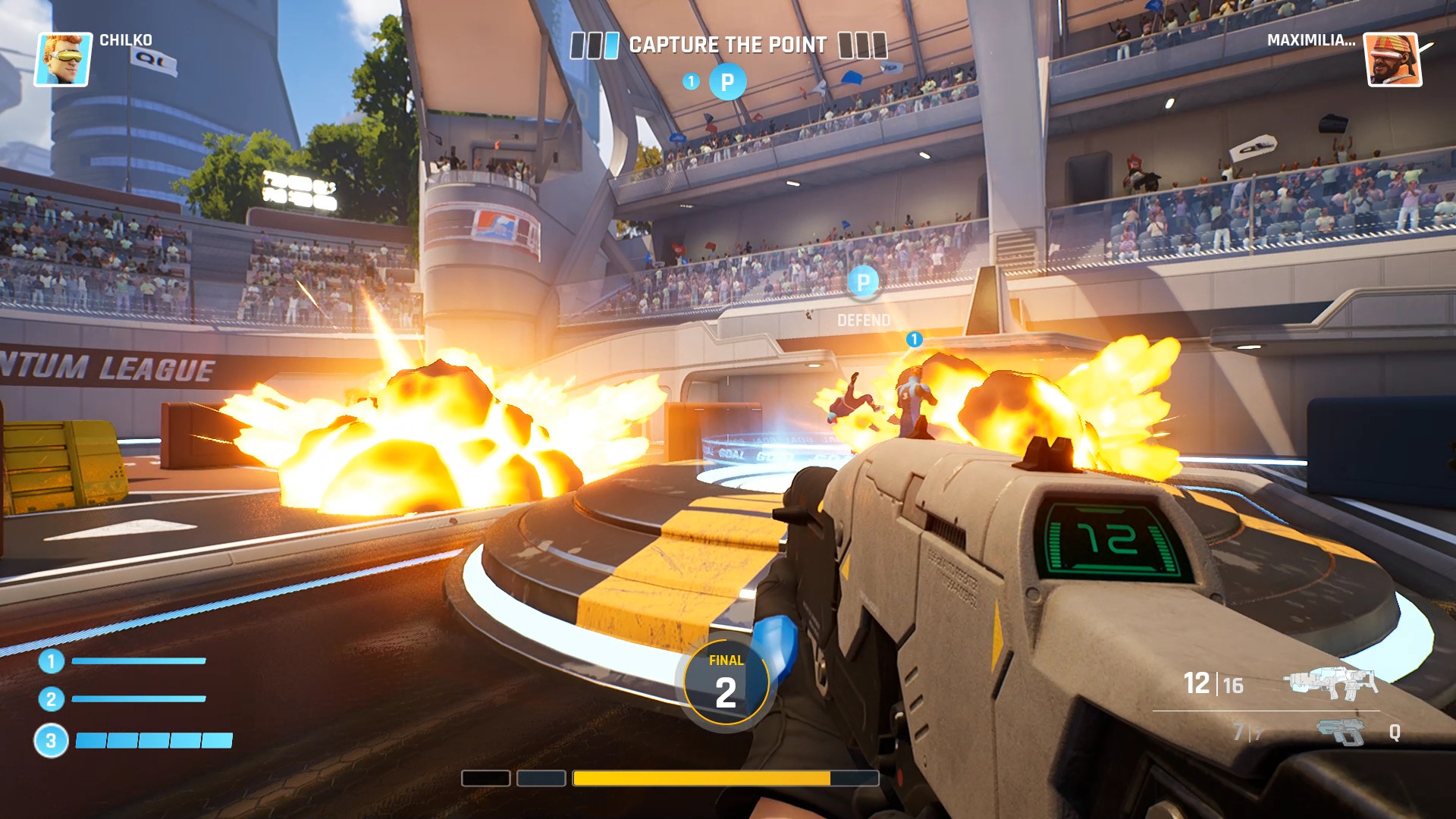 The core gimmick of Quantum League is that each round of a match plays for 15 seconds and depending on the game mode, you can try to tackle the objective immediately or eliminate the opposition first. If you die, you “Desync” and keep playing for the remaining seconds.

And then… round 2 starts. The next round you spawn alongside a character that replays everything you’ve done in the past round. If you died in the first round and know what your enemy did, you can kill him in the second round and prevent your original death, and the rest of that “Desync” time is played for real. 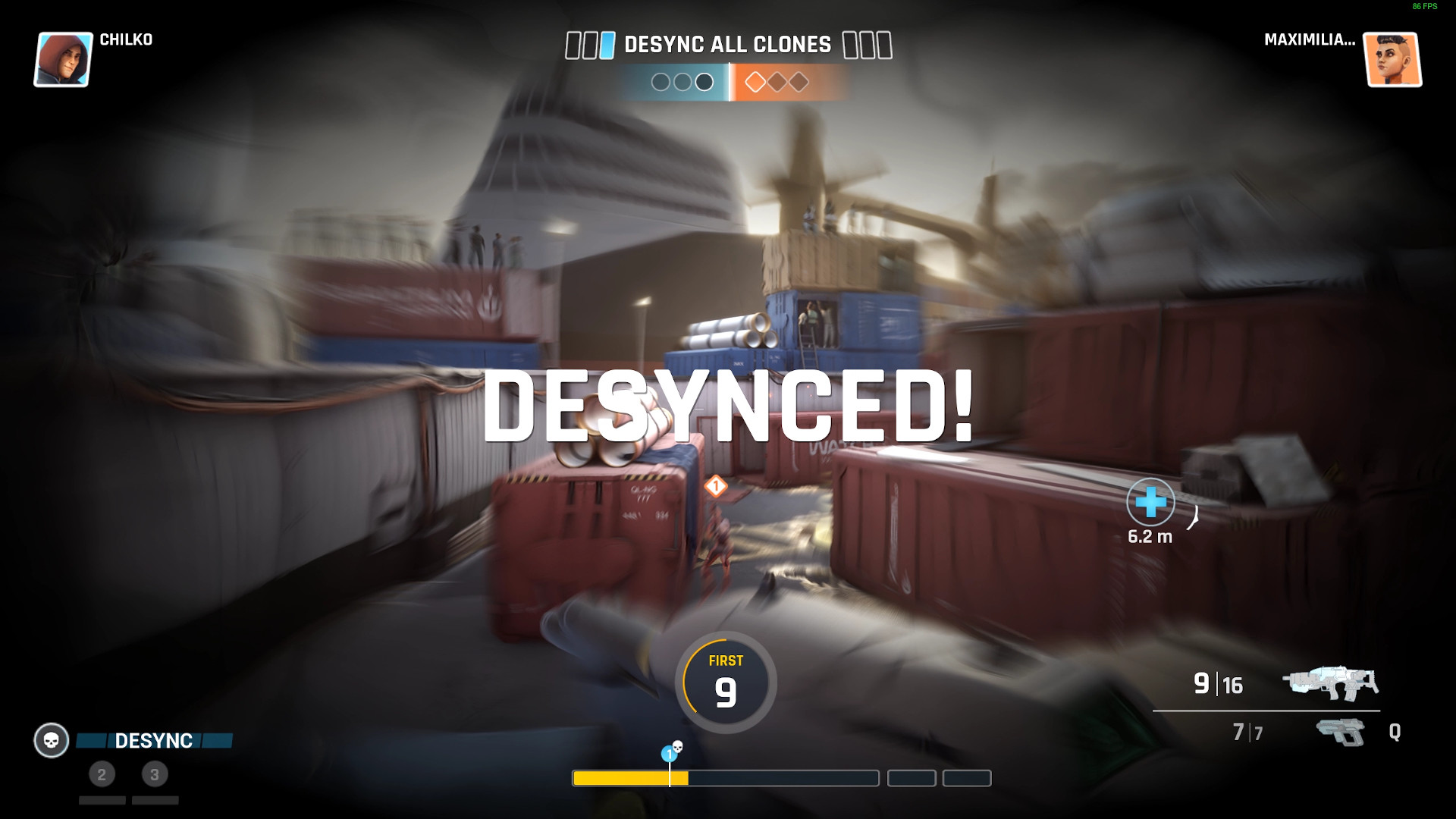 It is not only incredibly brilliant and balanced, but also adds an INSANE layer of depth to the game – while having good aim helps a ton, a good strategy will beat raw gunplay skill and that’s a sign of how you design a good game, a good multiplayer experience. After 3 rounds are played, there is a chance of reaching overtime, where further rounds are played, after which a player emerges victorious and gain a point – first to 2 wins the match.

The game has a big shortage of maps, and only 1v1 and 2v2 modes are available. I think a 3v3 “chaos” mode would be really chaotic fun, especially on a bigger map.

The game has a small selection of weapons – always having your trusty pistol, you can pick one of 5 primary weapons: SMG, Sniper, Shotgun, Grenade Launcher and Laser Gun. One of my biggest issues with the game during the open beta was the lack of gunplay quality (guns felt like weak pea shooters, sadly) but that was greatly improved in the main release – guns now feel really good, the SMG in particular feels extremely good to shoot, to the point that it’s my main pick almost every round (it also helps that it’s debatably overpowered, heh). Every gun has a use, depending on the map being played, how the opponent tends to play in his replays and in general how you play.

The only exception would likely be the Grenade Launcher which is nothing short of a useless joke and it needs either to be removed to give place to another gun or to be reworked.

The game’s tutorial is forced upon you at the start which is very intrusive and doesn’t let you configure the game at first, which is really annoying, especially since the tutorial is quite large and the second half of it is optional, unlike the first half. This isn’t the only inconsistency in the game, though, as the UI in the menu is really obtuse and some menu prompts you would expect to do something, actually show something else – this is a big point where the Early Access state is noticeable, because the gameplay itself during matches is practically flawless and polished to perfection. It’s worth noting that the HUD UI during gameplay is really solid and well done unlike the menus. 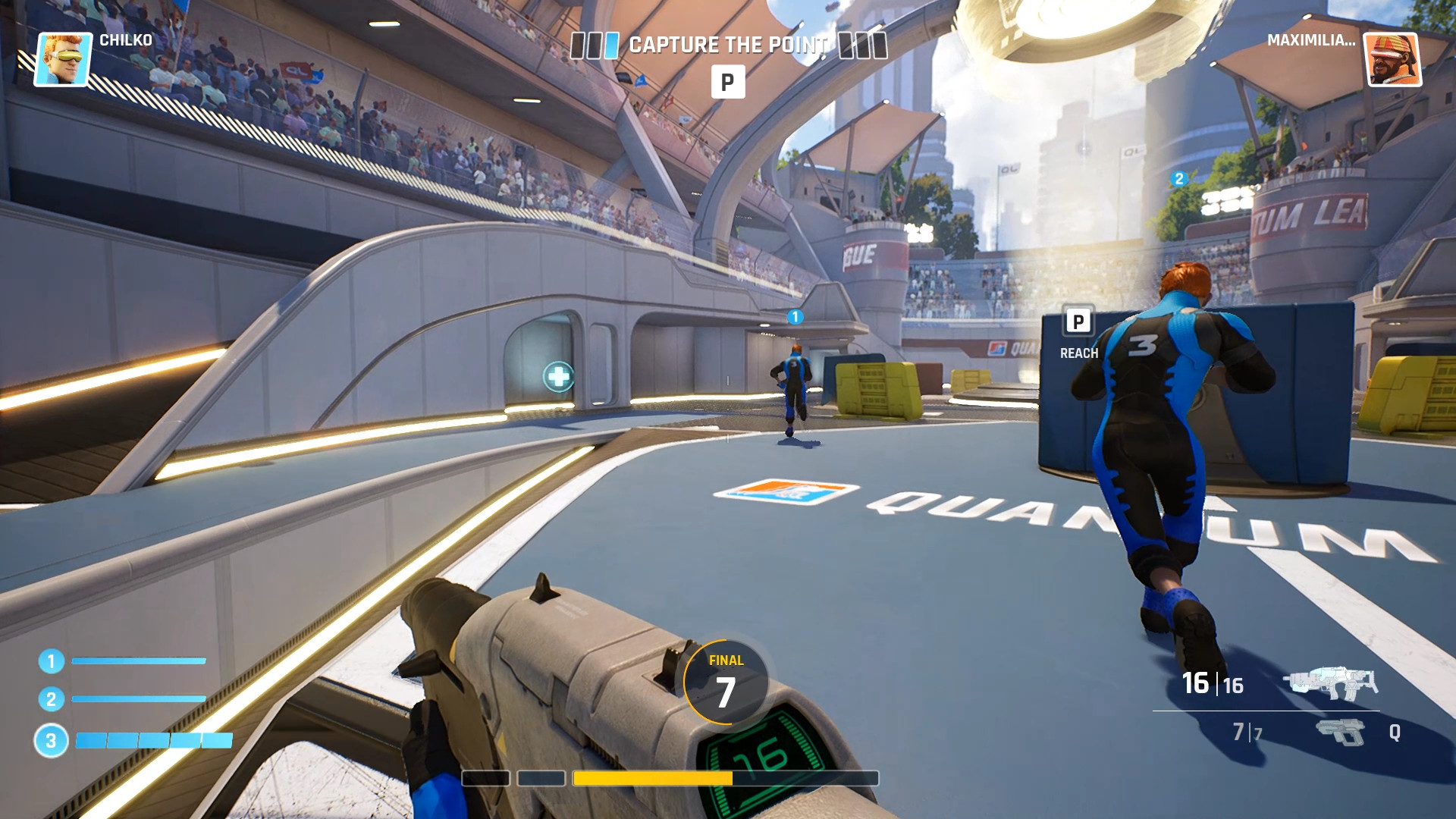 Great soundtrack overall, has enough varied tracks to be fun to listen to – all tracks are also really cool, having a electronic vibe I really enjoy and fits the game’s sports shooter theme.

Guns sound really good and the overall gameplay has great audio design. I wish when catching orbs there was a better sound effect though – more distinguishable – an issue I was already familiar with in the beta.

I’m also a bit disappointed at a lack of voice lines from the characters (they are just skins) but I think some fun one-liners or trash-talking prompts would make the game feel a bit more fun and lighthearted and enhance the sports atmosphere.

A very clean, simplistic look that is extremely enjoyable to look at. Animations are really good in first person (the pistol reload is quite stupid and underwhelming, though) and I love how it’s all very distinctive. You know where the objective is, the enemies are easy to spot and don’t mix with the environment thanks to a great play and contrast between colours. This way, the game not only keeps a simple but attractive art style, but manages to keep the gameplay focused on skill and strategy, instead of who has a better eye-sight like some FPS of late suffer from.

Quantum League, despite being in Early Access, already feels complete as far as polish is concerned. The price of 18,99€ is absolutely insulting for the presented content, on top of a relatively small playerbase which may render potential buyers to be afraid to buy it and not pull the trigger on this game.

My stance of how this game was marketed and released is not positive but I couldn’t be happier about the state of the game – one of the most original, well crafted and fun multiplayer FPS games I’ve played in recent memory. I sincerely hope it bounces back and finds a decent constant playerbase.